A Weekend In Vancouver: What To Do With 48 Hours 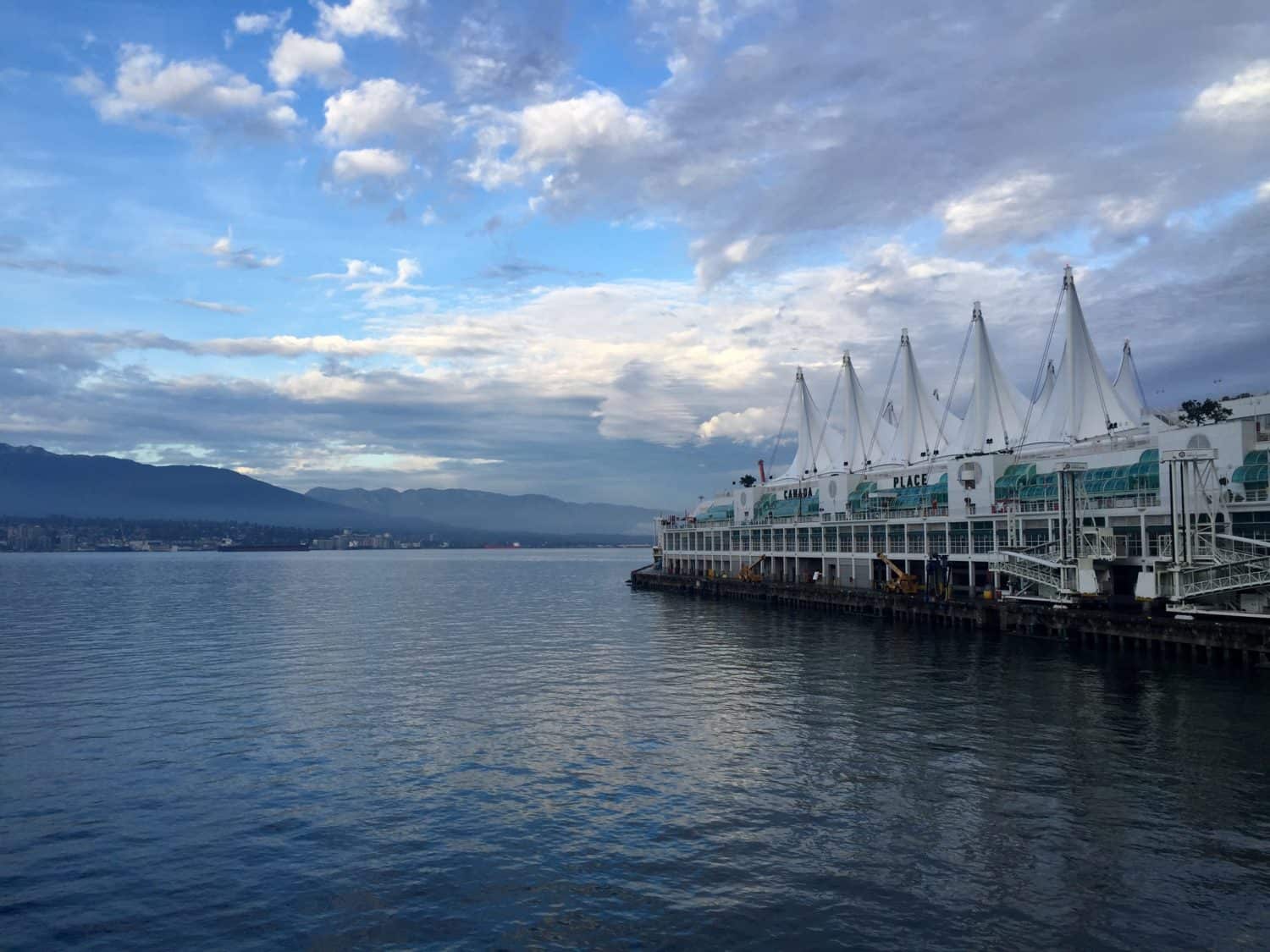 Doggone, you’re beautiful.  My friend @FareWhispers found us $350 round-trip tickets to Vancouver from Atlanta, and how do you pass that up??  So we headed up to British Columbia for a long weekend in late August.  As always, I did a ton of research ahead of time so that we could take in as much as possible of this beautiful West Coast city.  Hopefully you can benefit from this on your own adventure!

We actually spent our first day driving the Sea-to-Sky Highway up to Whistler and Joffre Lakes, about an hour or hour and a half north of Vancouver.  It was stunning, and I’m glad we carved one day out of our three-day weekend to head up north.  You can learn more about how we structured our 3-day weekend Vancouver & Whistler itinerary here.  But this is all about our Vancouver adventures…so off we go!

We set out from Whistler fairly early in the morning, I caffeinated, and we drove the Sea-to-Sky Highway going back the opposite direction.  Unfortunately the sky was a stony gray, and when we got back to Vancouver the overcast and slightly rainy weather wasn’t going anywhere.

Our solution?  Sample the best of Vancouver’s many brewpubs and wineries! 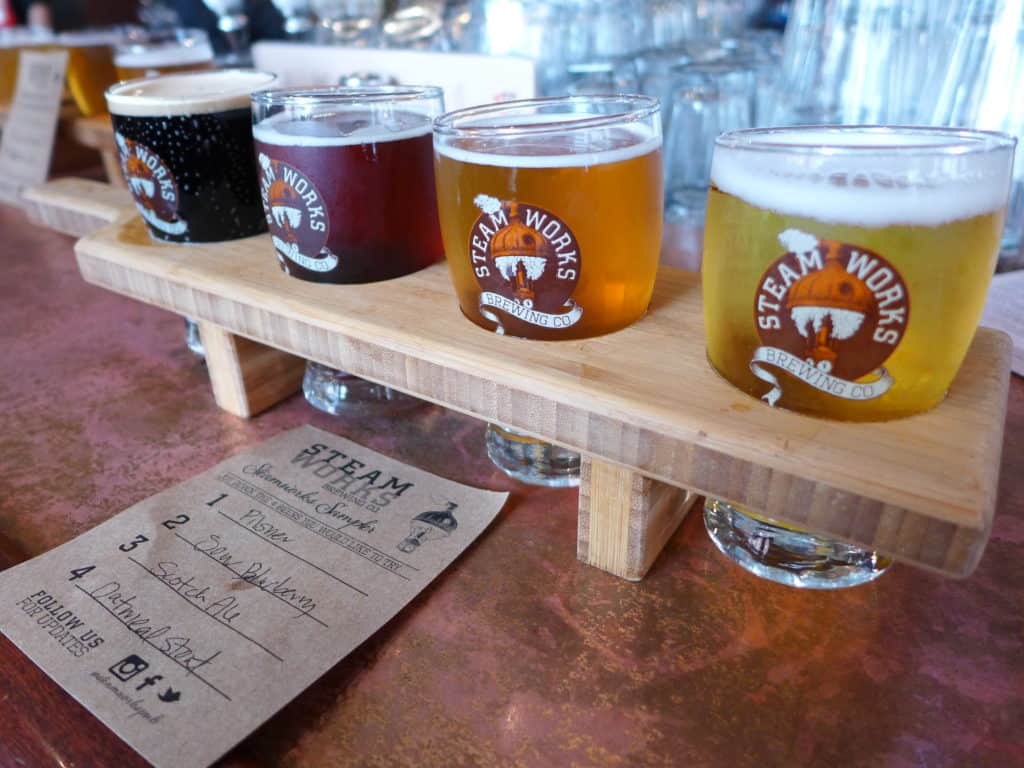 I’d done a ton of research, and we also asked the concierge at our hotel for her recommendations.  She called over the doorman/valet Donny, who circled several great options on the map, and we set out on foot.  First stop was Steamworks, right down the street from our hotel and super close to public transportation.

On a side note about housing…Vancouver is EXPENSIVE!  We had trouble finding anything in our price range, and ended up using a combination of hotel points (Marriott) and money for our stay.  It still wasn’t cheap.  So take that into consideration when planning your trip.  We stayed at the Delta Hotel Suites Vancouver, and had amazing service.

We got there right around 11:00 a.m. as they were opening, and pulled up a seat at the bar.  The bartender gave us little papers to create our own individual beer flights, and we ordered a giant plate of poutine too—for good measure.  The oatmeal stout was delicious; not a fan of the sour blueberry, but that’s not surprising.  We also walked around Gastown on our way to our next destination.

(On a side note, Vancouver’s signs were ON POINT. So punny.) 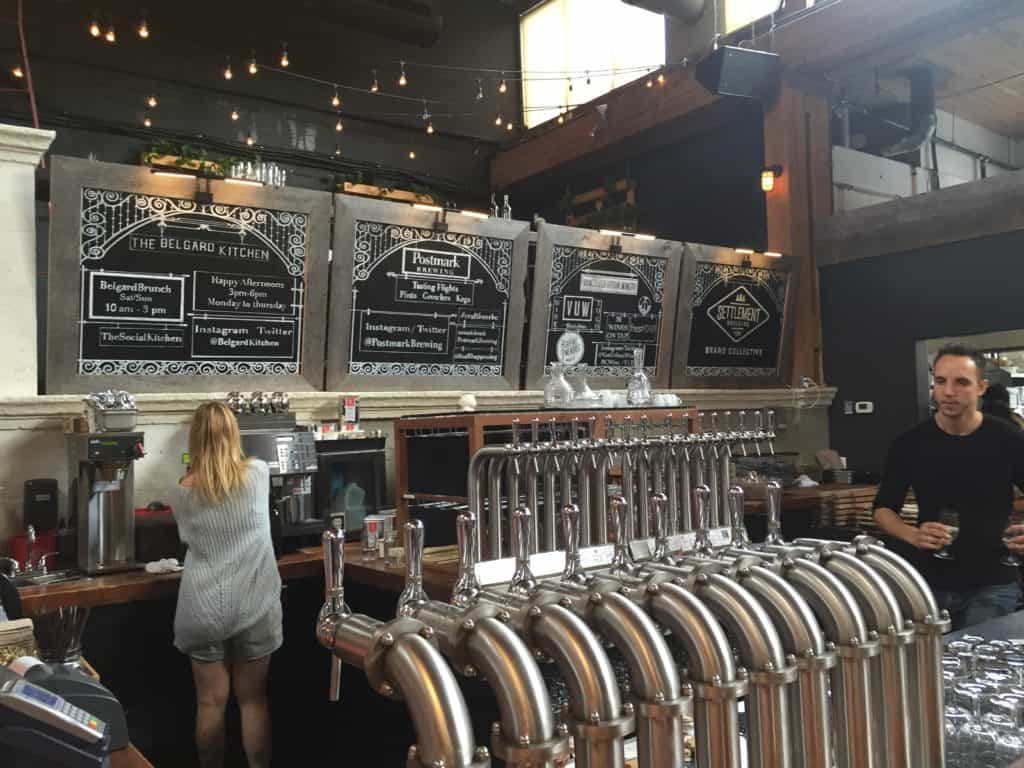 Next step was Vancouver Urban Winery.  We walked from Steamworks to Urban Winery, which also shares space with Postmark Brewery and Belgard Kitchen.  It has the COOLEST vibe.  We bellied up to the bar and took in the whole experience.  It was basically made for me…delicious wine, beer on tap, amazing food, and ’90s hits blasting.  It made me want to sit down with my computer and chill for a few hours. 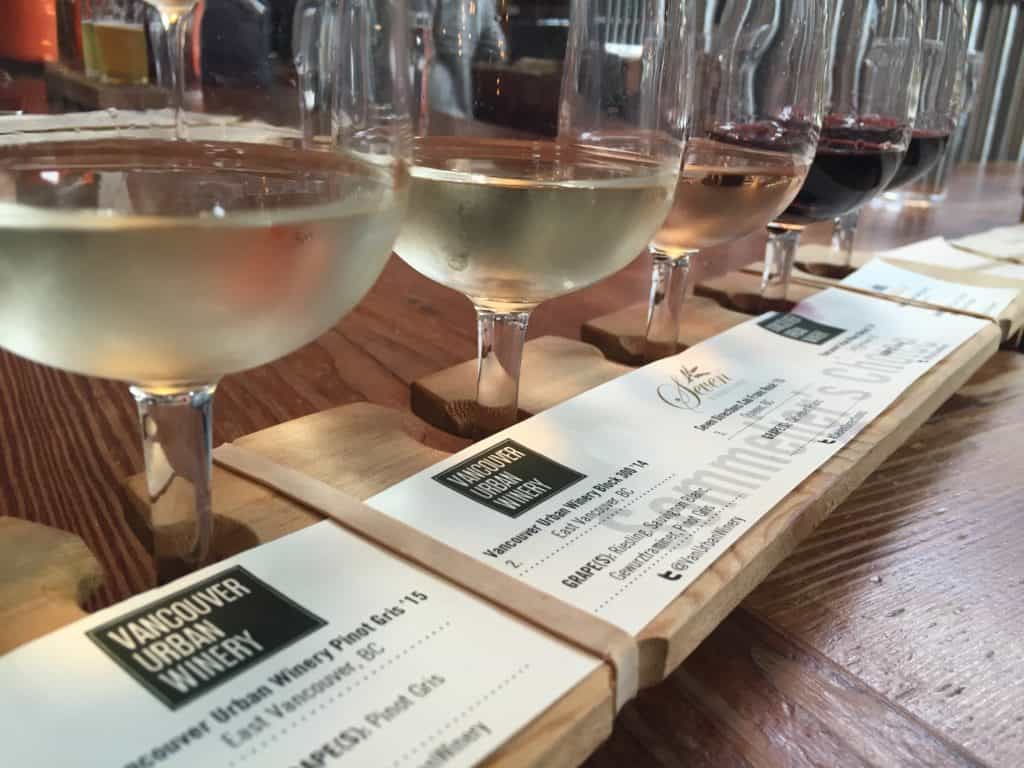 We were still kind of full from the poutine, so we split a breakfast burger (delish!) and each got a flight of wines.  I got a flight of beer as well 🙂  Can’t recommend this place enough, we had a blast.

A note of caution:  part of the area we had to walk through to get here from Steamworks was kind of…sketchy, for lack of a better word.  We felt quite uncomfortable with all the homeless people congregated and keeping an eye on us as we walked through.  It may have been totally safe, but it’s kind of a transitional area and we didn’t feel great about it, so might be worth a cab over there (particularly if you’re women, alone, at night, etc.).  Mostly just listen to your instincts. 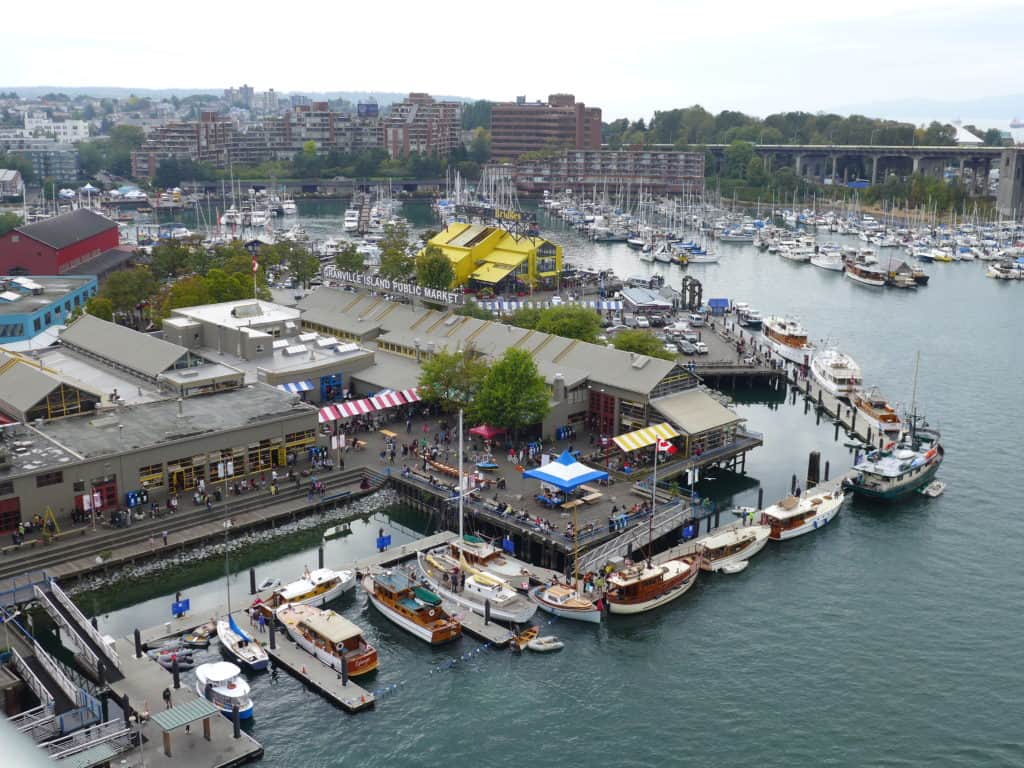 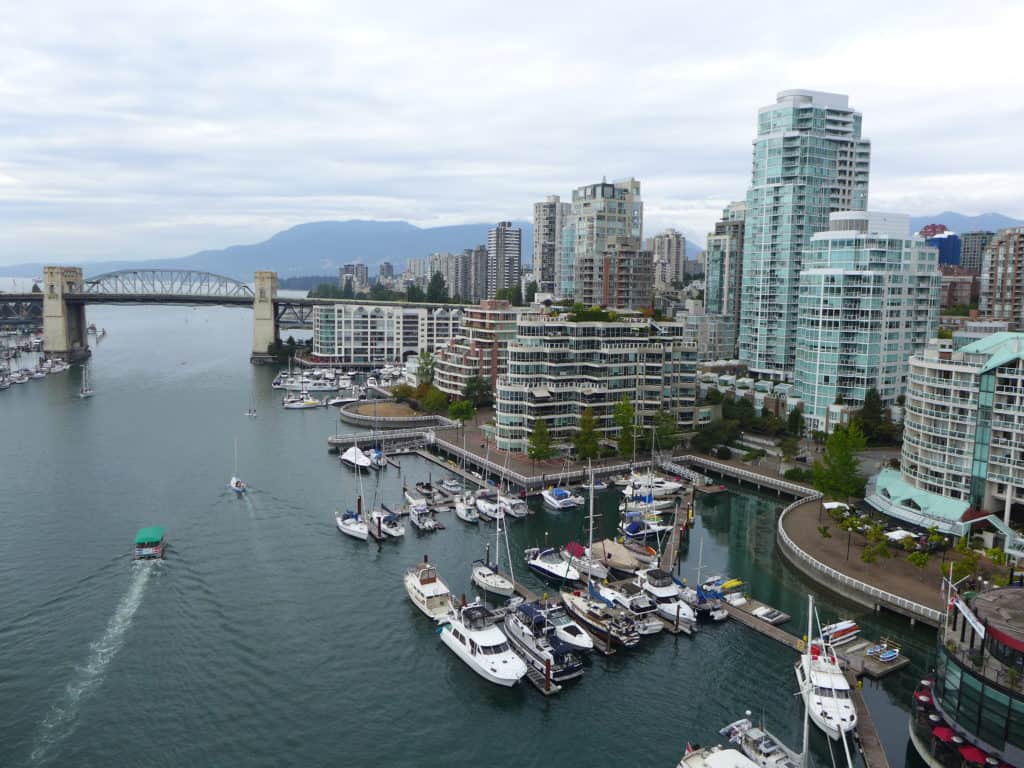 We stopped back by our hotel for a few minutes and decided we had time to swing by Granville Island Public Market, even though the weather was still not cooperating.  While there had been a few teases of blue sky on our way to the winery, the rain clouds had rolled in again.  We decided to walk to the island, which was…dumb, honestly.  The folks at the front desk seemed to think we were a little nuts to undertake it, but told us it should be like 45 minutes (which didn’t sound crazy to us).

It was…an adventure.  I think we maybe did something a little wrong, missed a turnoff or whatever.  Needless to say, take the bus.  We ended up taking the bus back, actually, because our feet were TIRED.  It was super easy and much faster.

Anyway, Granville Island was…fine.  Nothing earth-shattering.  It started raining when we got there, which was a bummer.  We walked around a bit, went to a bakery and into some too-expensive shops.  The part we enjoyed the most was the big indoor market.  I bought a couple sweets, my friend got some cool tea, and we got to taste a bunch of really cool flavored olive oils and balsamics (which of course I had to buy!).

Bottom line:  of all the things we did, Granville Island and Lonsdale Quay Market were totally missable. 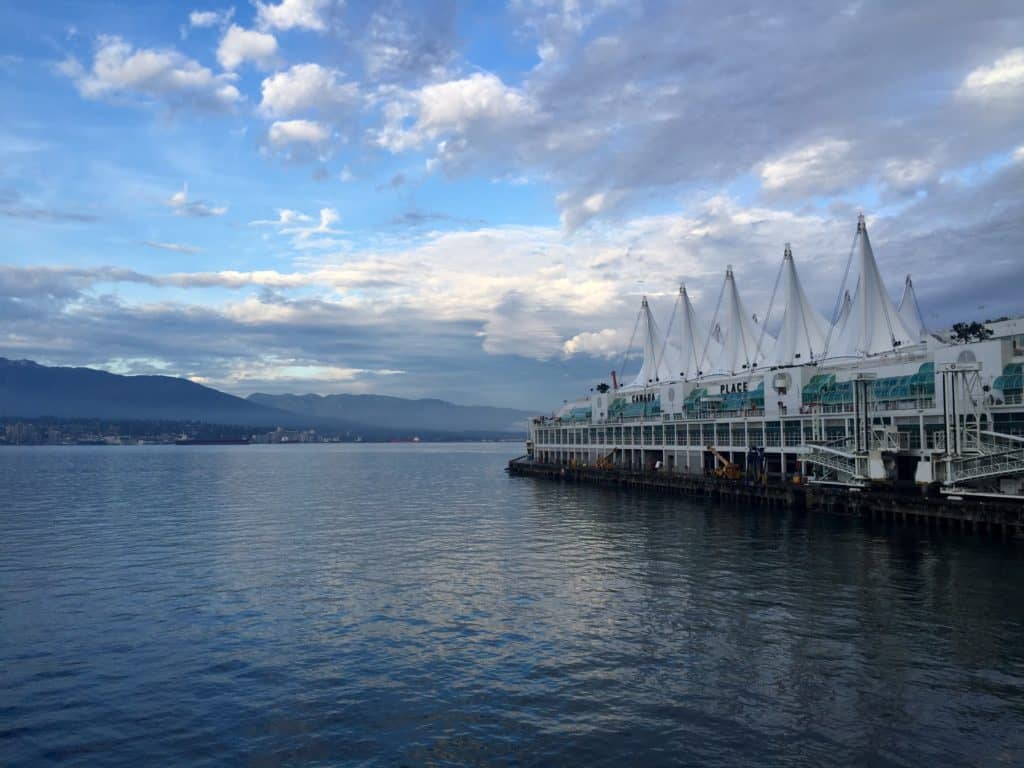 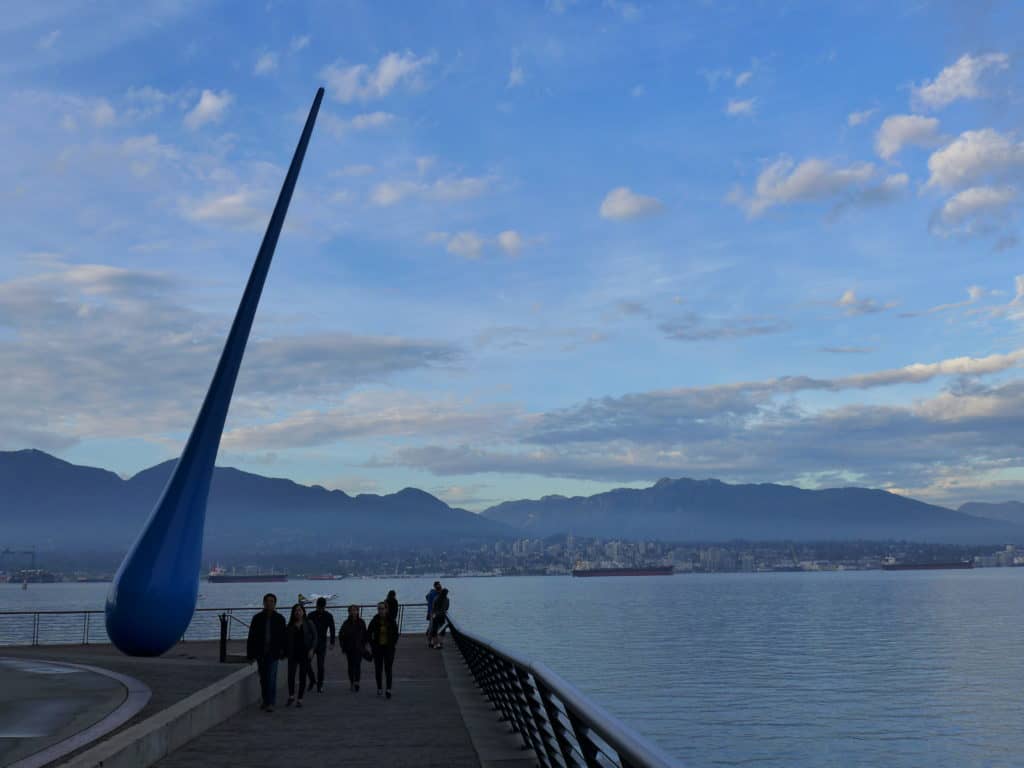 Our awesome concierge came through for us again and recommended dinner at Cardero’s, a restaurant on the Seawall.  We headed out and got sidetracked by the beautiful sunset on the water.  We watched the seaplanes take off for forever, watched the clouds float by and reflect on the water.  It was incredibly peaceful, and one of my favorite moments of the whole trip. 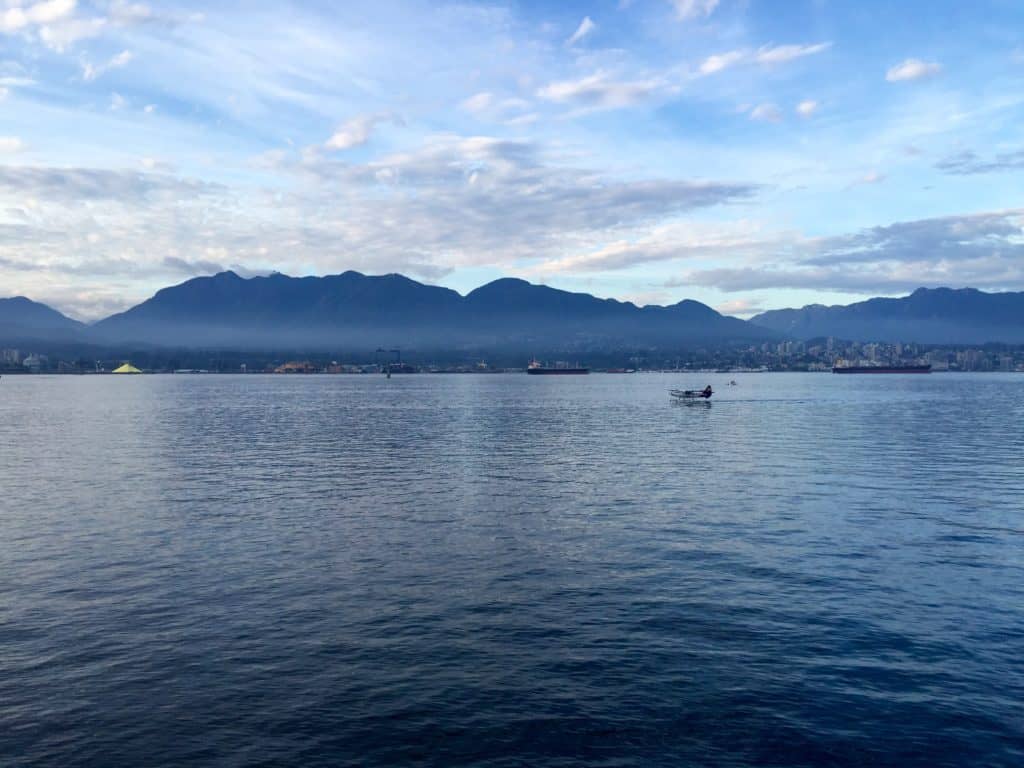 Unfortunately my friend started feeling really sick, so instead of dinner we headed back to the hotel, ordered delivery Chinese, and watched the tail-end of Pitch Perfect.  Which is totally up my alley, so I’m not complaining!

We made sure to get out of the hotel extra early so we could walk over to Thierry, the amazeballs French pastisserie we discovered the first morning on our drive to Whistler.  This was my first almond croissant experience, and it basically changed my life.  Seriously, if you’re in Vancouver, go.  Run, don’t walk! 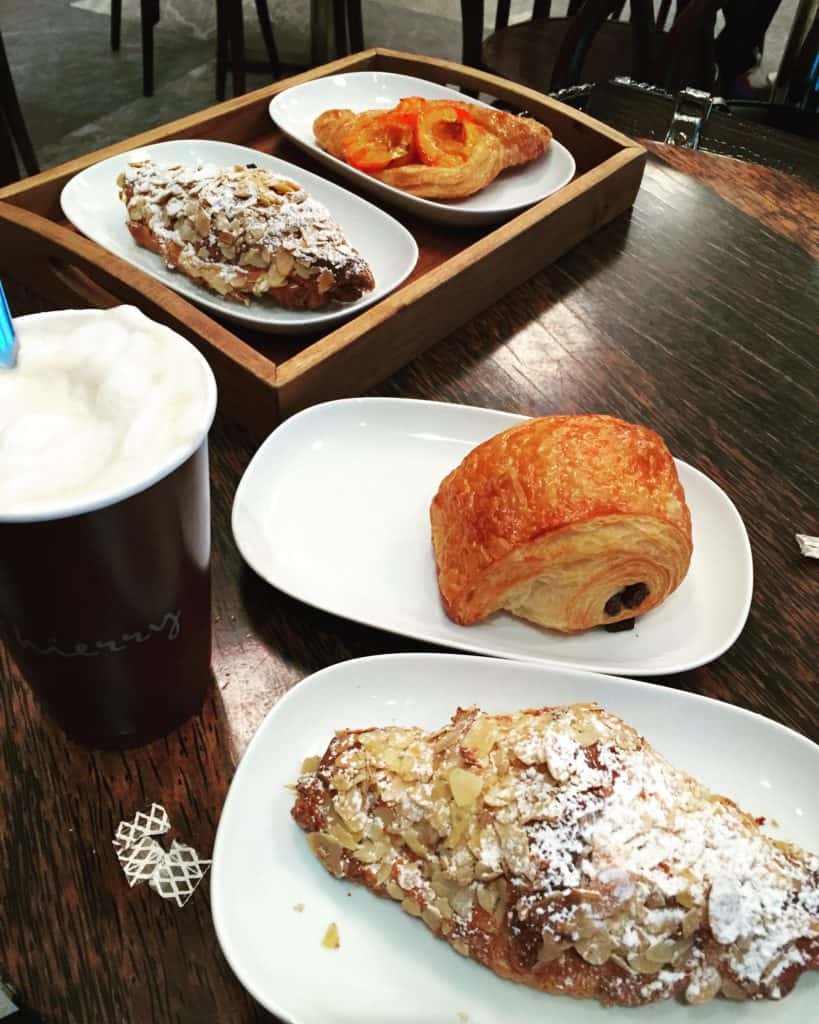 If this 3-day weekend is your jam, try:  A Perfect 3 Days in Willamette Valley & Portland

Then we headed back to the convention center on the Seawall, where we caught the free public shuttle to the Capilano Suspension Bridge Park.  It was about a 20-30 minute drive to the park, and our bus-driver-slash-tour-guide Norman (and adorable elderly Jewish man rocking a yarmulke) kept us entertained with jokes, history, and interesting tidbits about current-day Vancouver.  He was awesome! 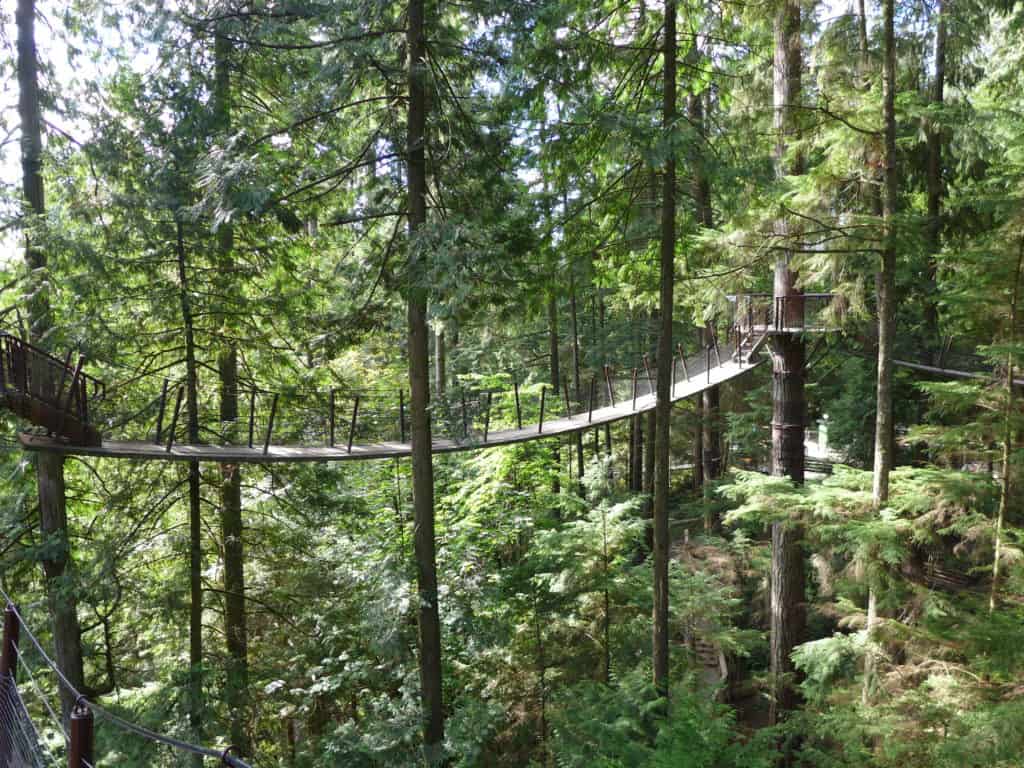 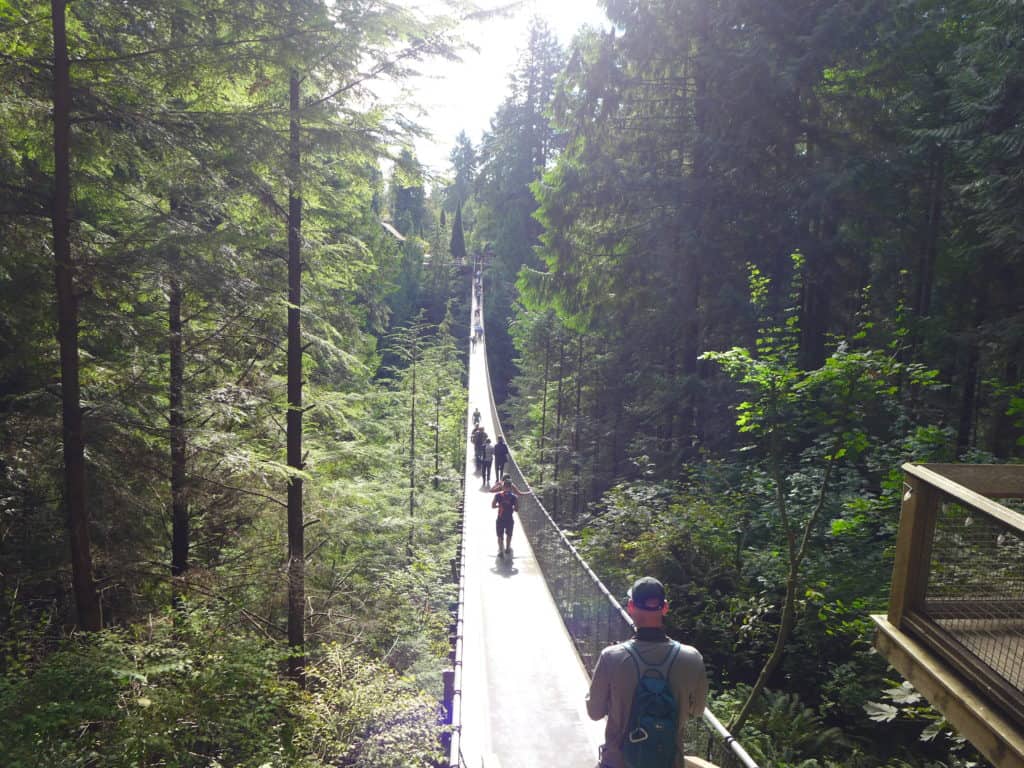 We made sure to catch the very first shuttle of the morning so we could get to the park pretty much as soon as it opened and try to get some pictures on the large suspension bridge without hordes of people.  We had mixed results, but some patience after the first rush finally paid off (the pic at the top of this article is my favorite). 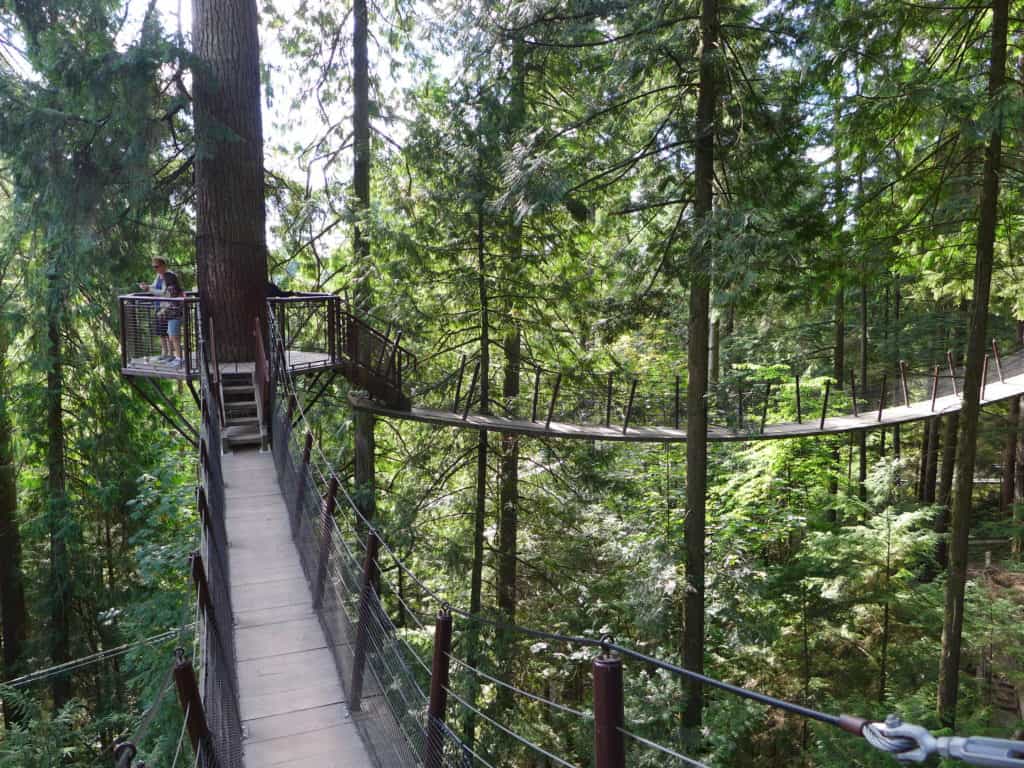 It was a gorgeous morning, quite warm (this was late August), and after doing the bridge we did the Treetop Adventure and the Cliffwalk, and ended up watching an adorable baby owl named Radar for a while (and a falcon named Tucson).  Radar was insanely adorable.

While it’s certainly touristy (no question), we totally felt like Capilano was worth the time and money–as long as the weather is nice.  It wouldn’t be nearly as great of an experience if the weather isn’t cooperating. 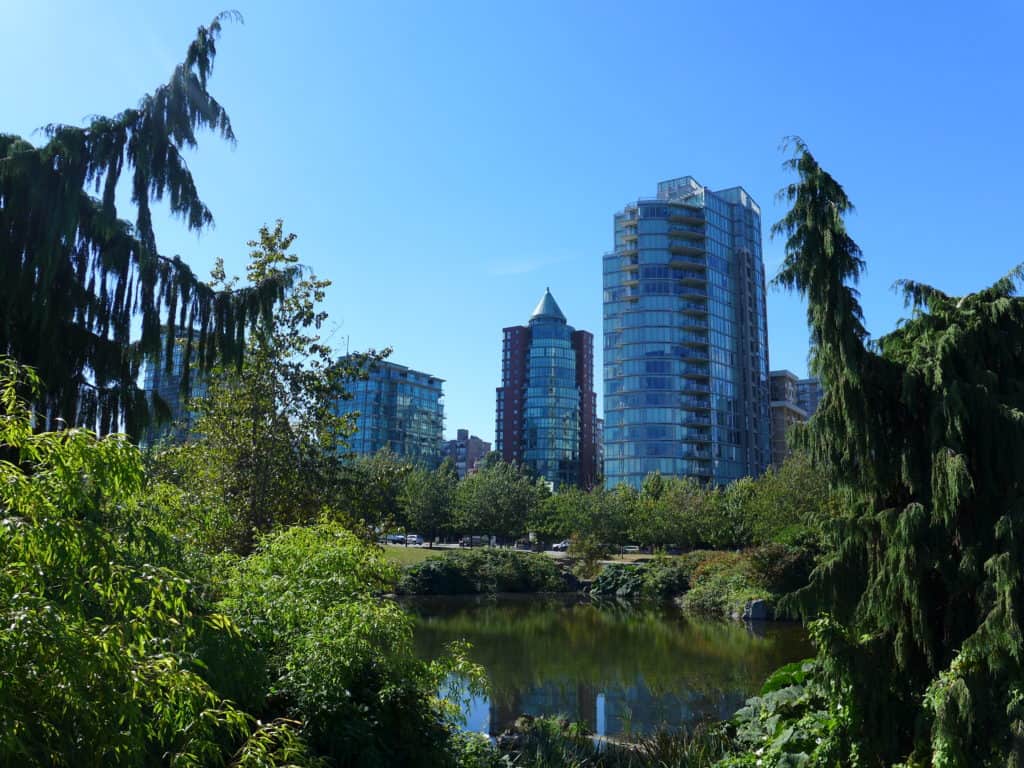 The bus back from Capilano makes a few drop-offs, and so we decided to hop off at Stanley Park.  I was uncomfortably warm in my skinny jeans at this point, but we walked around for an hour or so, including the rose garden.  We weren’t doing anything specifically, just enjoying the glorious weather and beautiful views. 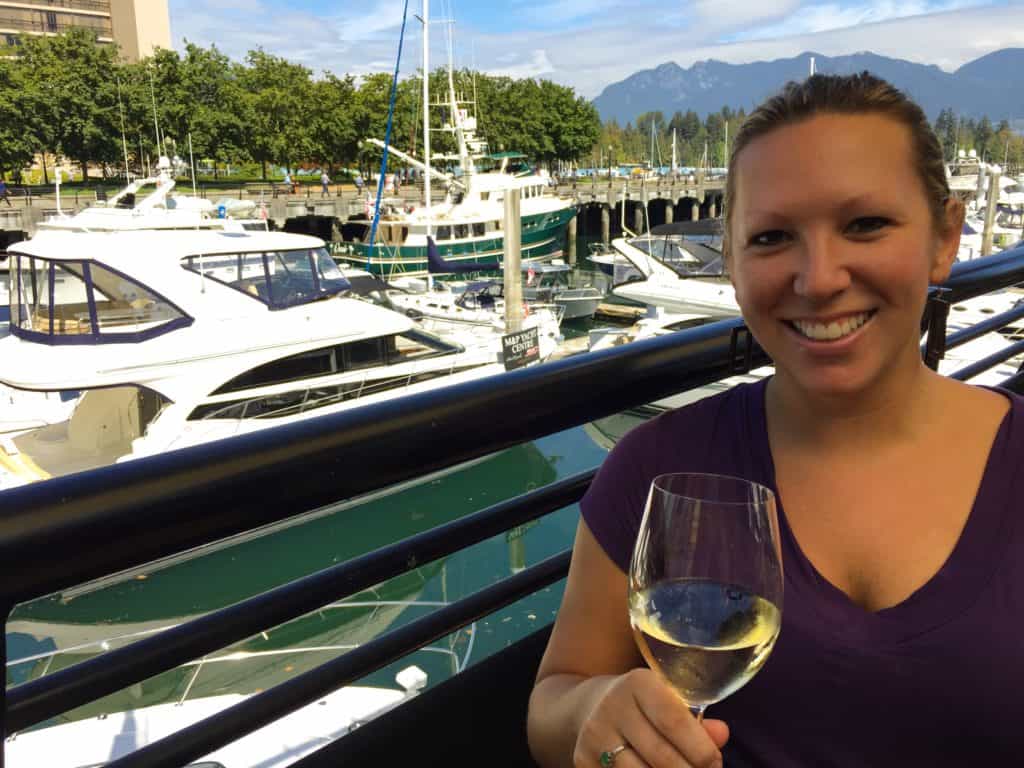 As we walked back toward our hotel (I was DYING to change into a sundress), we happened upon Cardero’s–our intended dinner destination the night before.  We decided it was worth a delay in changing clothes, and parked ourselves on the shaded patio.  While we waited for our food, I sipped chilled white wine and watched the boats bob in the harbor.  My salmon burger and seasoned fries were hot, fresh, and super yummy.  The beer list was impressive too, and the service left nothing to be desired.  Highly recommend this gem! 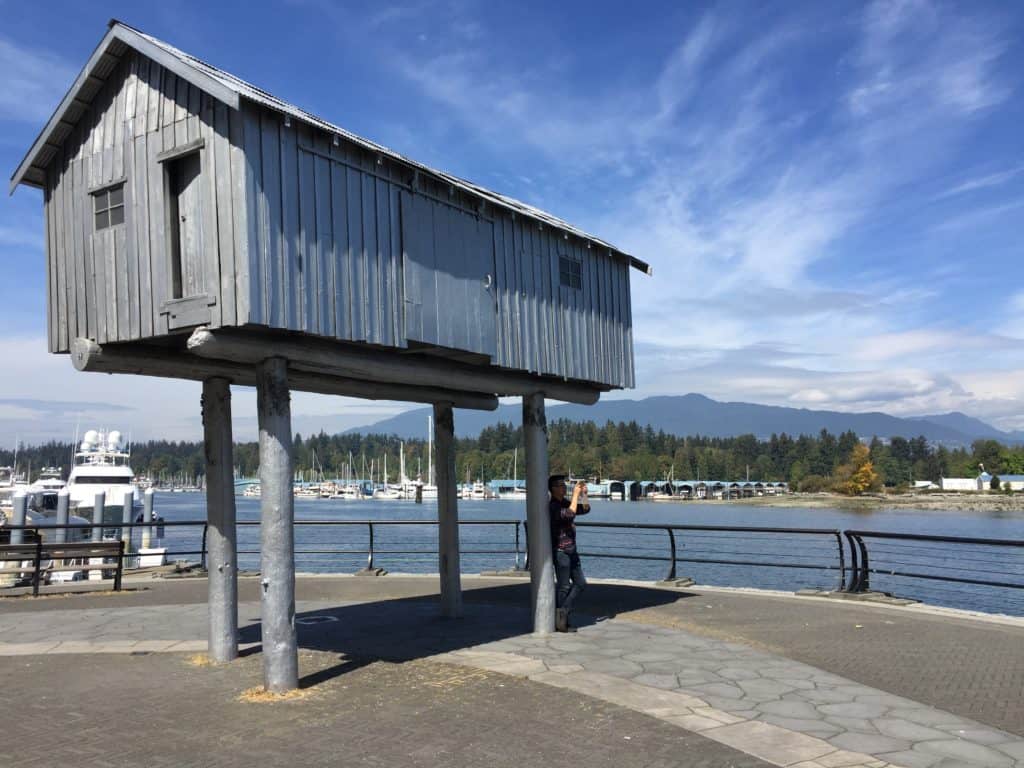 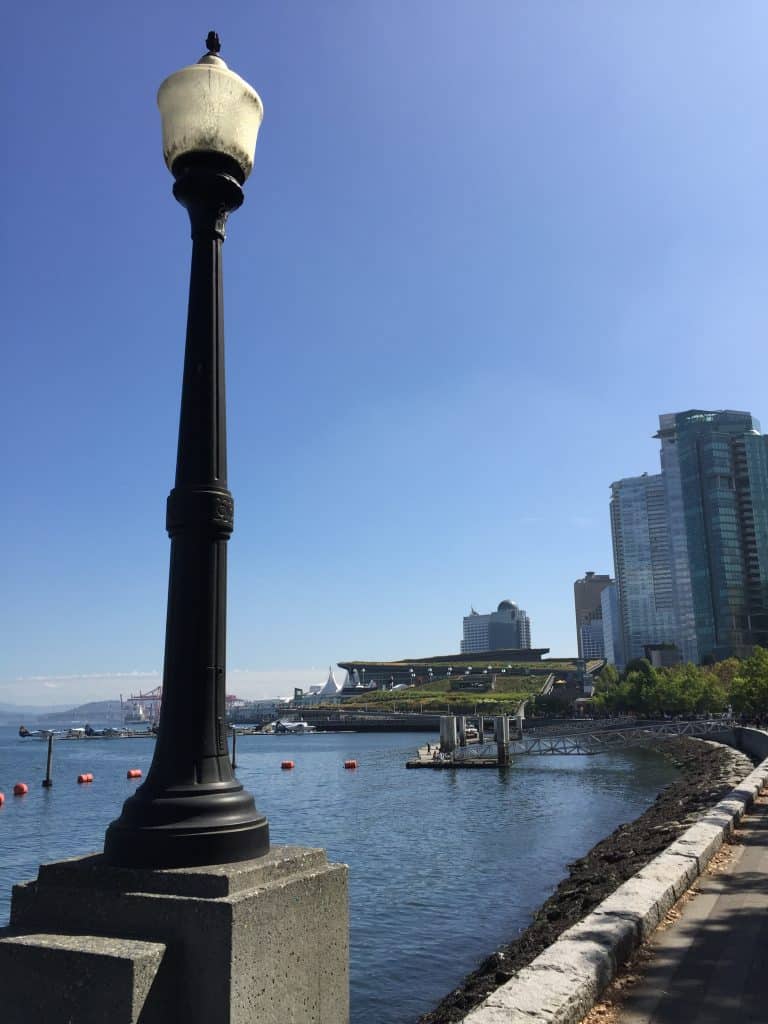 The Seawall walk back to the hotel was gorgeous, with seaplanes taking off constantly and bicyclists zooming around us. 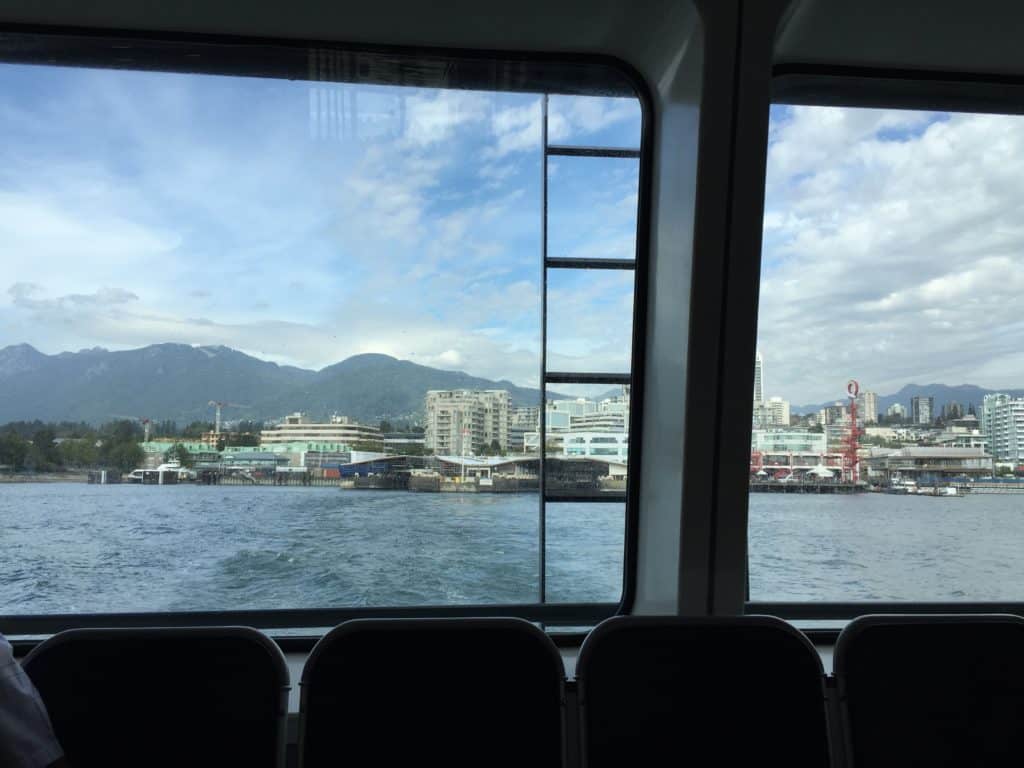 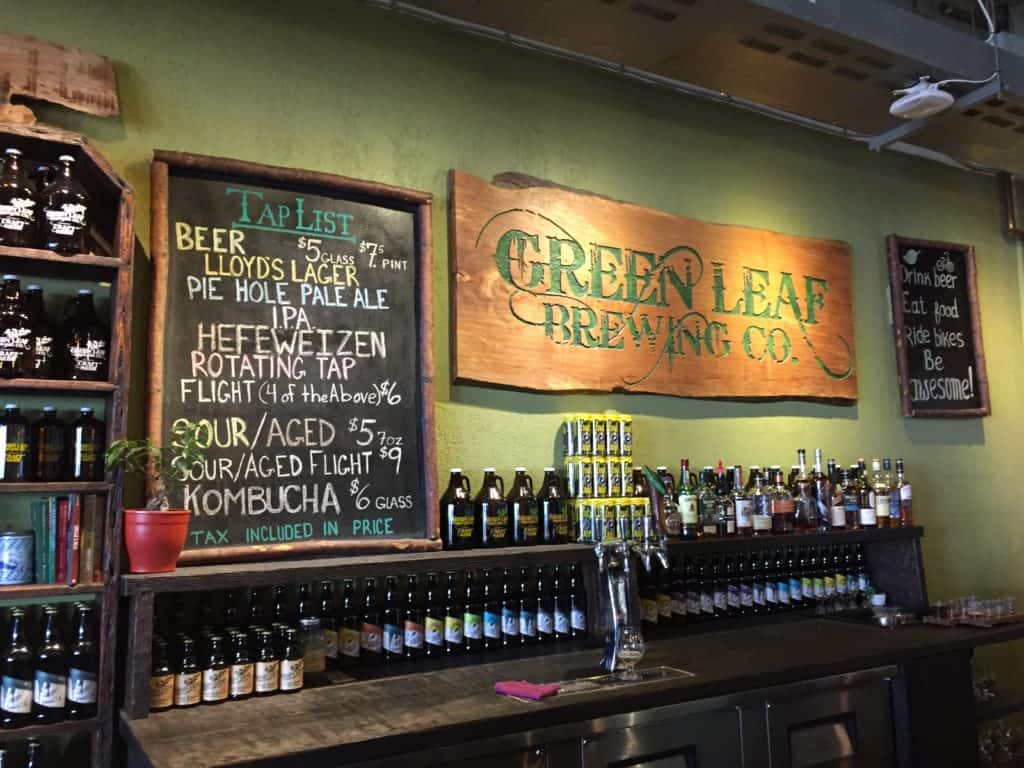 With a couple hours left to kill before heading to the airport, we decided to catch the ferry over to Lonsdale Quay Market.  While the market itself was ho-hum and very small, we enjoyed the view from the ferry and walking around outside looking back toward Vancouver.  My only complaint is that I wish you could be outside for the ferry–it was a beautiful day and it would have been amazing.

All-in-all, my two days in Vancouver were amazing and I can’t wait to visit this stunning city again!

Things to do with two days in Vancouver

What did I miss?  Favorite places, must-see sight, best food??  Let me know in the comments!

Other weekend itineraries to consider: 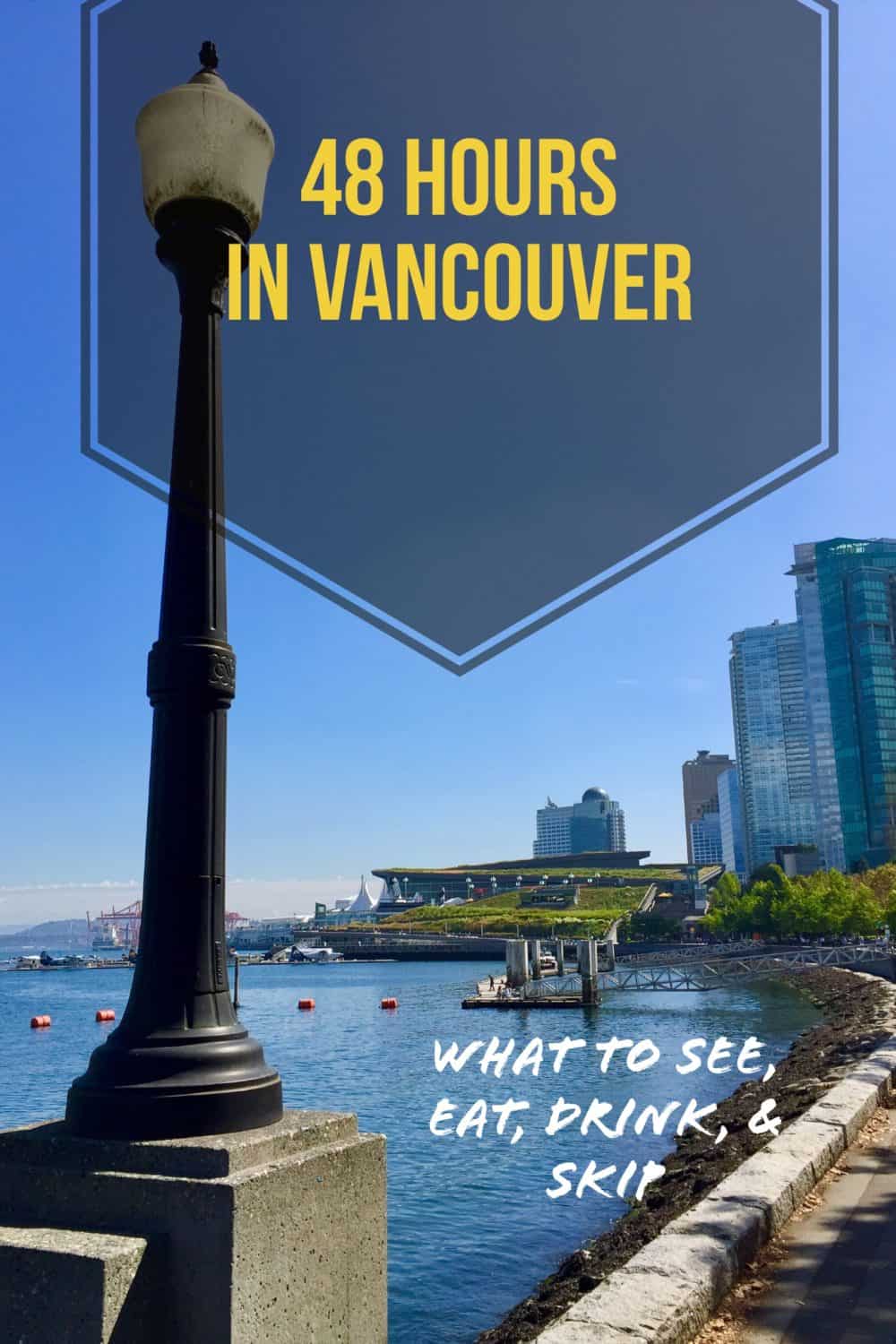 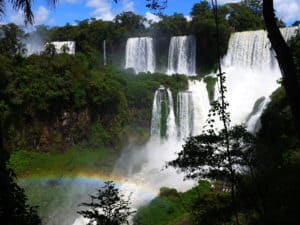 How to Plan the Best Trip to Argentina's Iguazu Falls 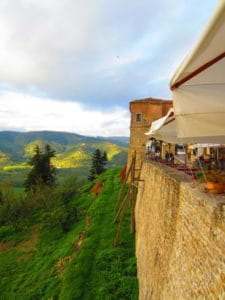 What a time to look back...not only the end of a y

When timing lines up perfectly...have you ever acc

Checkin’ out the Palazzo Vecchio with one of the

While the Piazzale Michelangelo is my favorite vie

Impossible not to start my day with multiple cappu

Sometimes you get lucky and are in just the right

This error message is only visible to WordPress admins


Error: API requests are being delayed for this account. New posts will not be retrieved.