Foodie Heaven: A Visit To Chicago’s Time Out Market 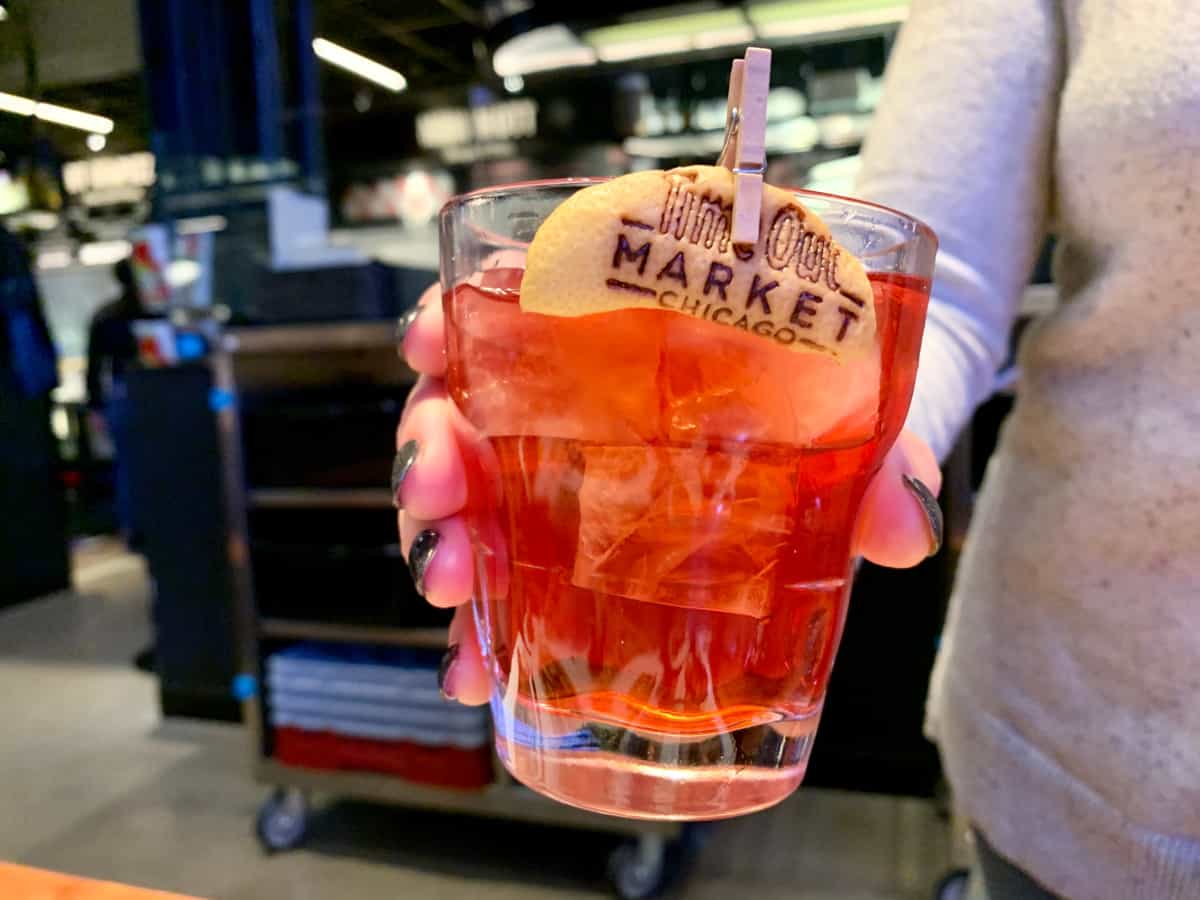 I get to visit Chicago fairly often for work, generally at least every two months.  Sometimes it’s a quick overnight, but other times I have a chance to snag a bit of time to explore the city’s awesome food scene on my own time.  This has led to my Chicago food & drink guide, and on my last trip I got to add another great entry—the newly-opened Time Out Market! 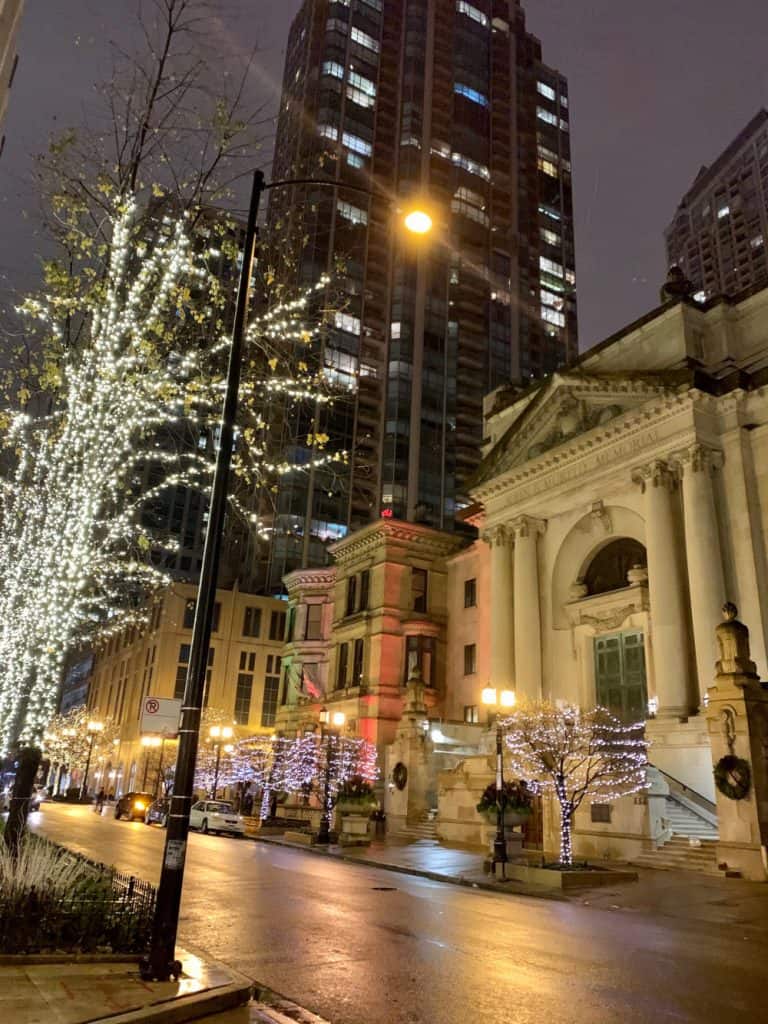 When @sjems5 suggested we give it a try, I was excited to see how it compared to Lisbon’s.  I visited the original Time Out in Lisbon a couple years ago and loved the overall idea, though found it overwhelming and a bit too crowded for my taste (long lines, couldn’t find a place to sit).

They’ve clearly taken some of those things into account in the Chicago location, and I found the experience great all around!

Some other tips for your Chicago adventures:

Why The Chicago Architecture Foundation River Cruise Is A Must-Do

Chicago Guide:  Where to Eat & Drink

What is Time Out Market Chicago?

Time Out is a food hall concept run by the magazine of the same name.  It’s meant to bring together the hottest chefs and eateries in the city, but with a different kind of vibe than a regular restaurant.

Time Out Market Chicago is located in Fulton Street Market, right in the thick of an awesome restaurant area.  It has 18 restaurants, a secret speakeasy, a rooftop bar, and a couple other regular bars, and more.

The market is generally open 7 days a week, 8am to 11pm or midnight (though you should check the website to be sure before visiting).  There are occasionally special shows or events held here too. 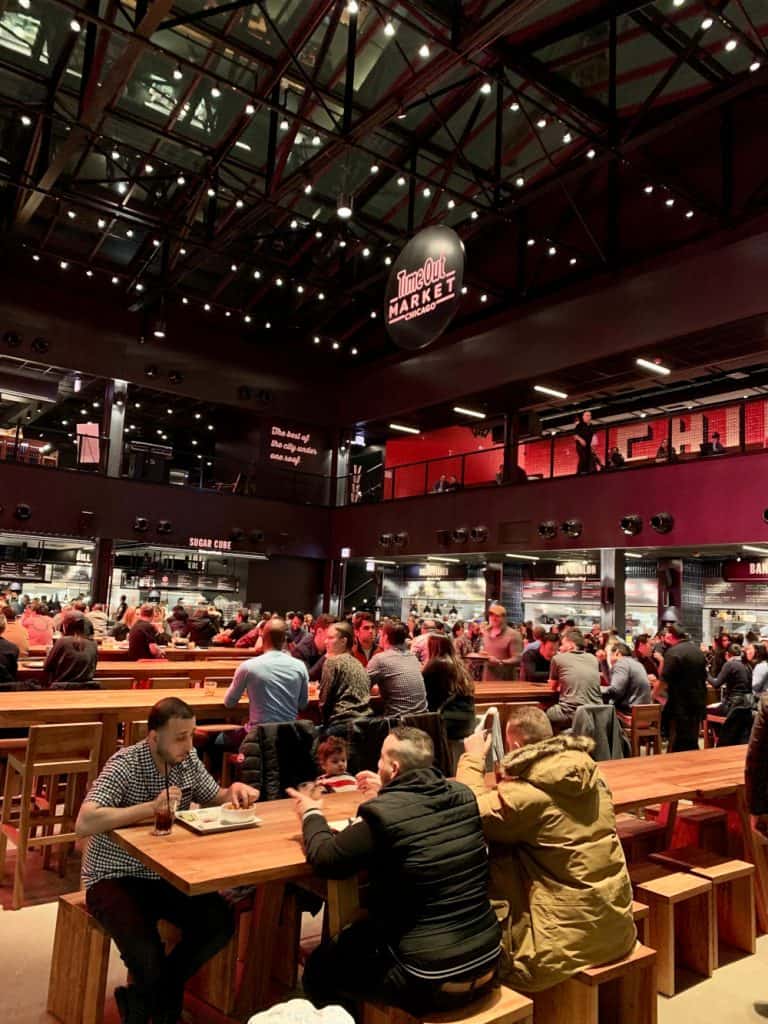 Traveling to Chicago in winter?  Check out this cold weather packing list!

When we arrived, we first did a full walk around of the eateries, making note of what dishes sounded best.  (Okay, what we really were doing was exclaiming to each other and practically drooling, but still…)

Then we split up and each went off to order things on our own, with the plan to split all the food.  This is how you know who your friends are in a place like this…and you can see our food waiting buzzer strategy 🙂 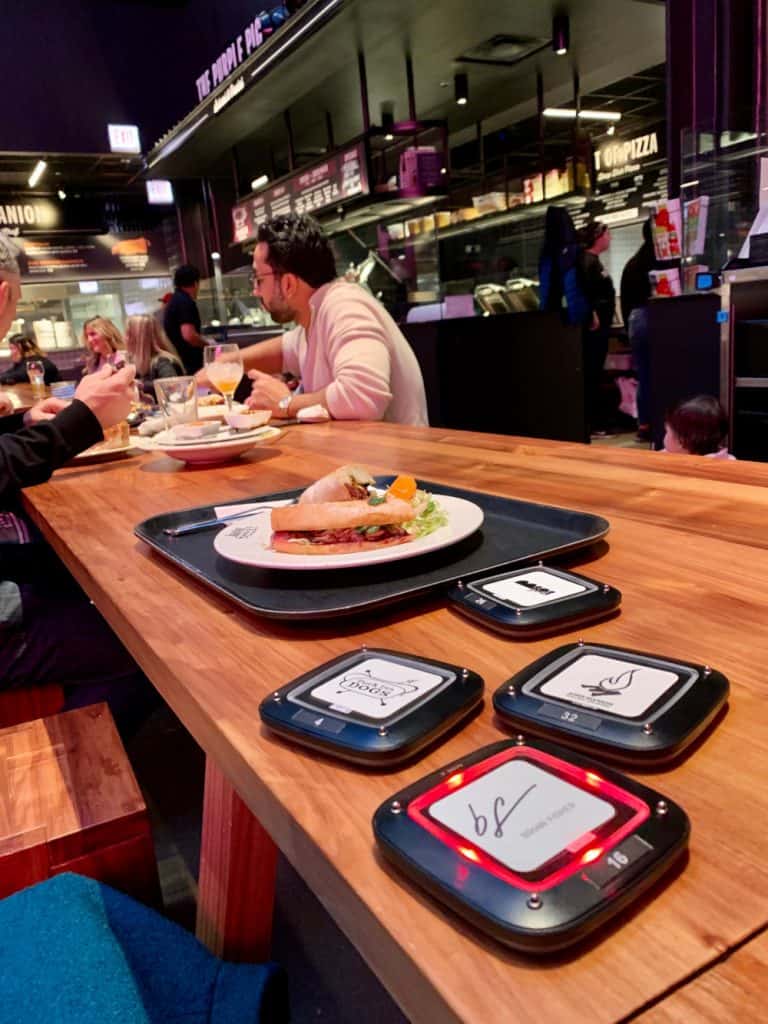 While we waited for our food buzzers to go off, we took turns staying at the table and going to grab drinks at the bar.  They’ve got an interesting beer list plus some cool cocktails (heavier on rum and tequila than I’m used to).  I had the Never Let Go Rose…I mean, how can you resist with that name?! 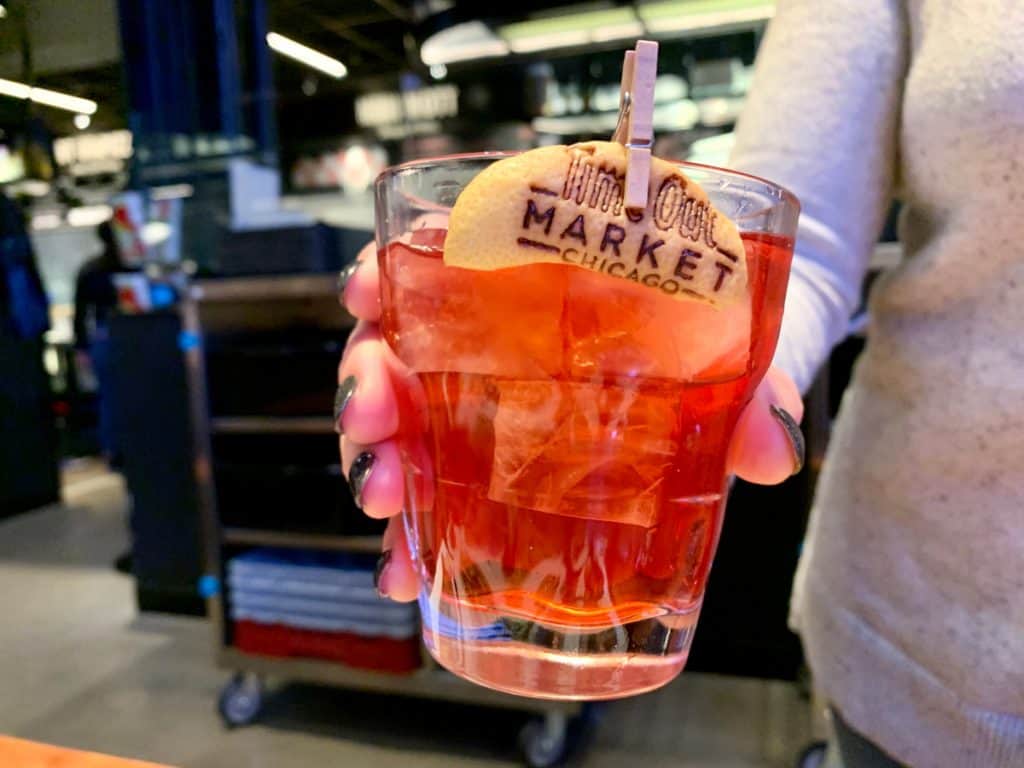 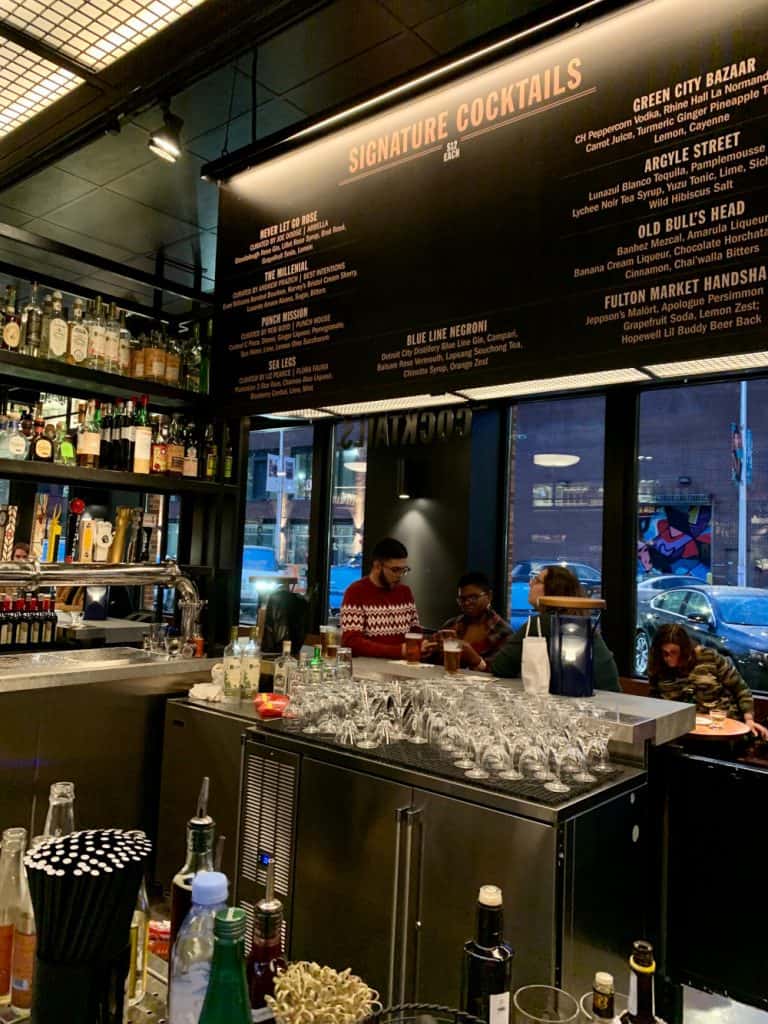 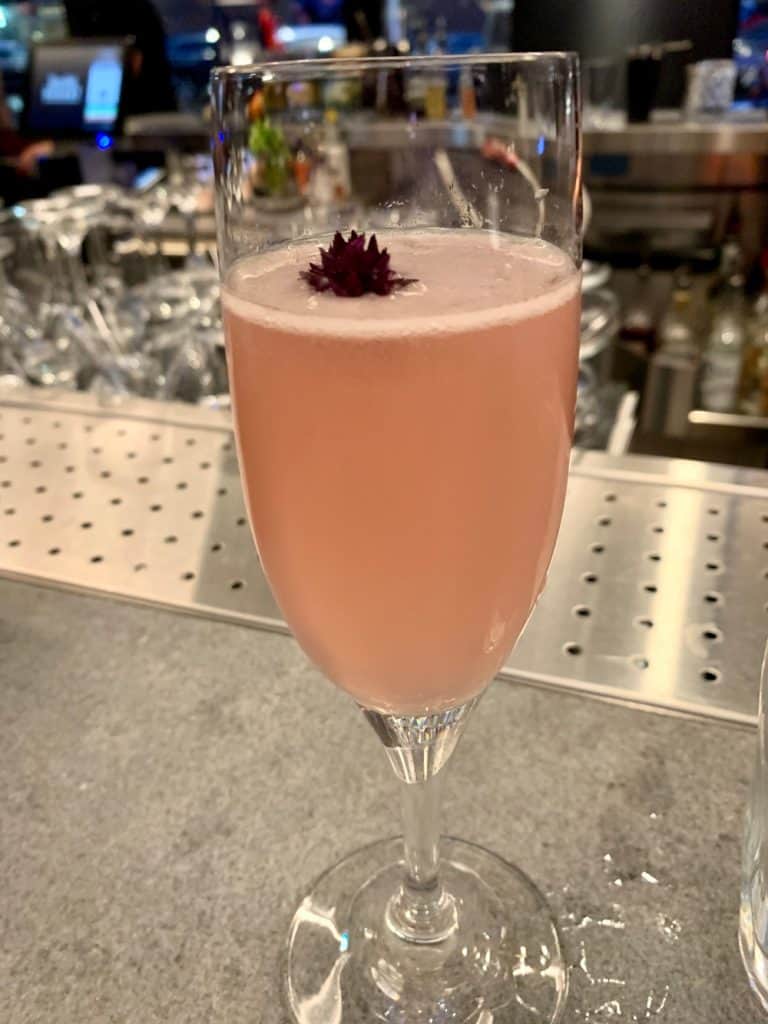 Finally all our buzzers did their thing, and we look at our amassed treasure.  I’m pretty proud of us. 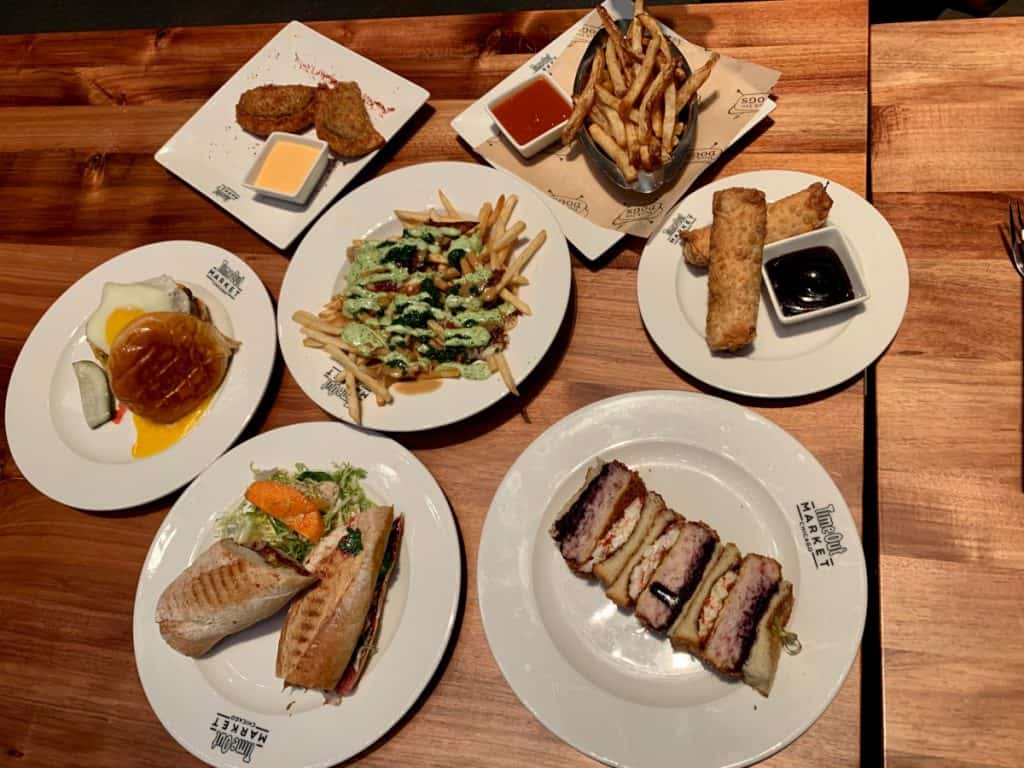 So I’ll give you my rundown of everything we ate at Time Out Market Chicago and my thoughts, to help you plan your own gastronomic strategy.

I think this was both of our favorite items!  It was just so INTERESTING…the richness of the duck prosciutto, the uniqueness and creaminess of the pistachio butter, and sweet pop of the jelly.  Add a chewy roll and you’ve got a winner! 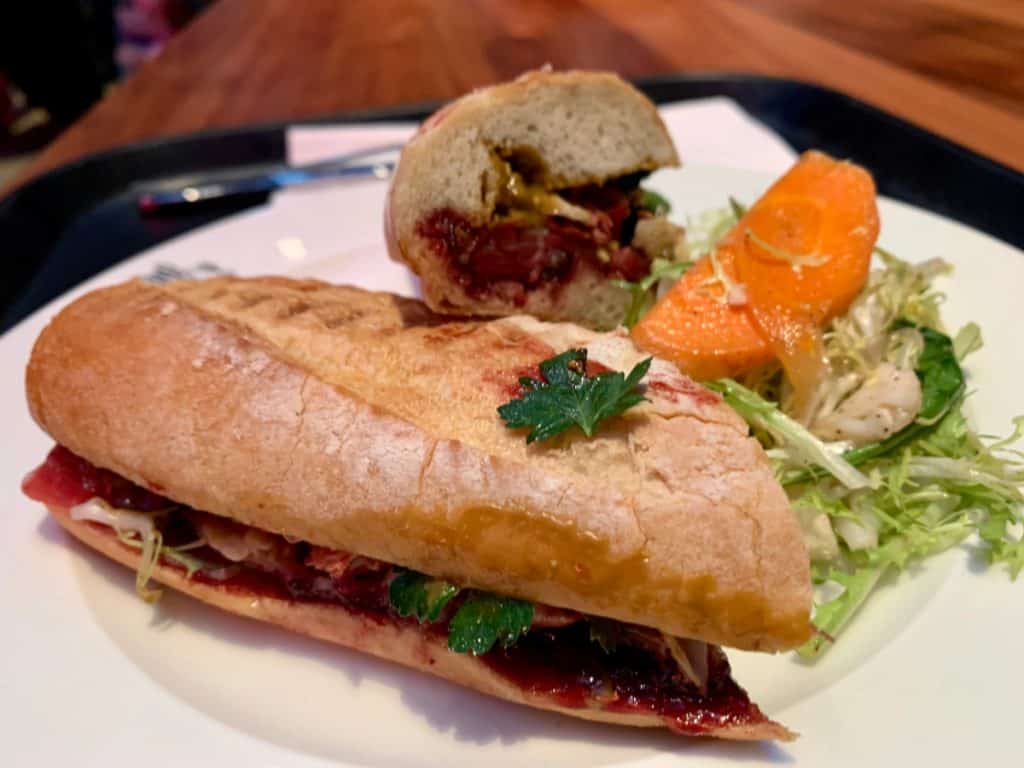 I didn’t know what to expect on this, but I was a little underwhelmed.  The dish includes chicken mousseline, fermented blueberries, cabbage, and more.  It was fine but didn’t rock my world.

We also ordered what was billed as peanut butter eggrolls, but didn’t realize they were really just fancy regular egg rolls with duck confit, hoisin, and veggies.  We thought they’d be more sweet like a dessert, and by the time we got to them at the end of the meal we weren’t feeling it as much—I think it would have been great as an appetizer though. 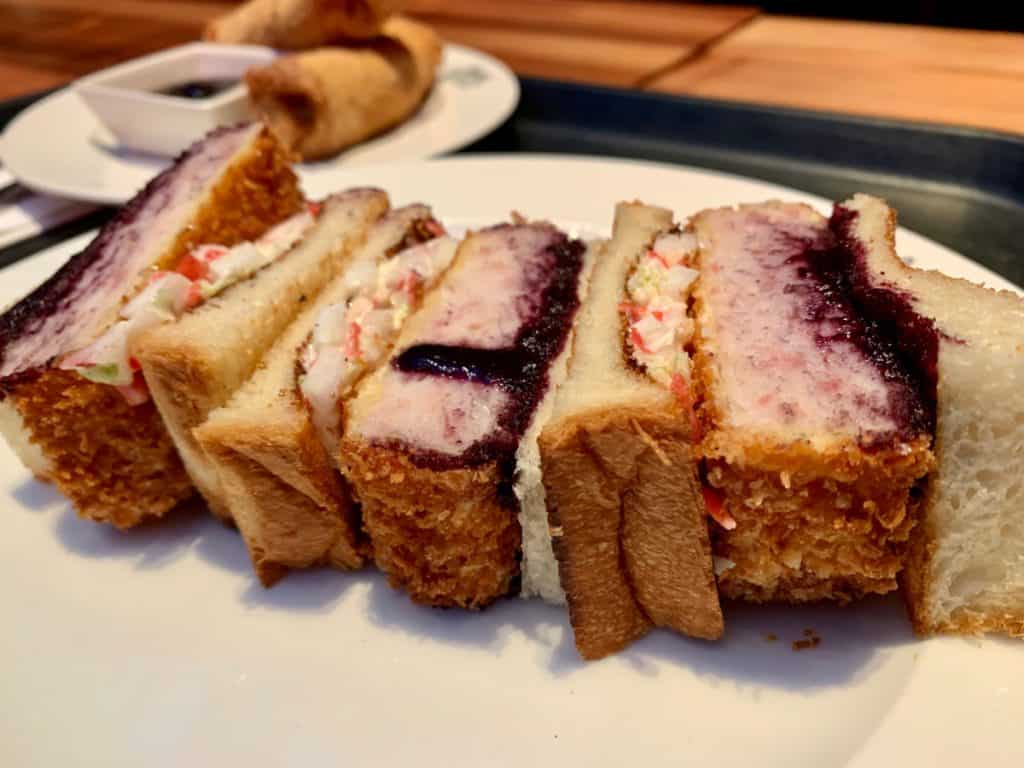 You had me at “poutine”.  This was pretty good, though kind of gilding the lily to be honest…the fries with either the gravy or the chimmichurri would have been great on their own.

The gruyere empanadas were quite good too, but middle of the pack on all our food items with how delicious everything was. 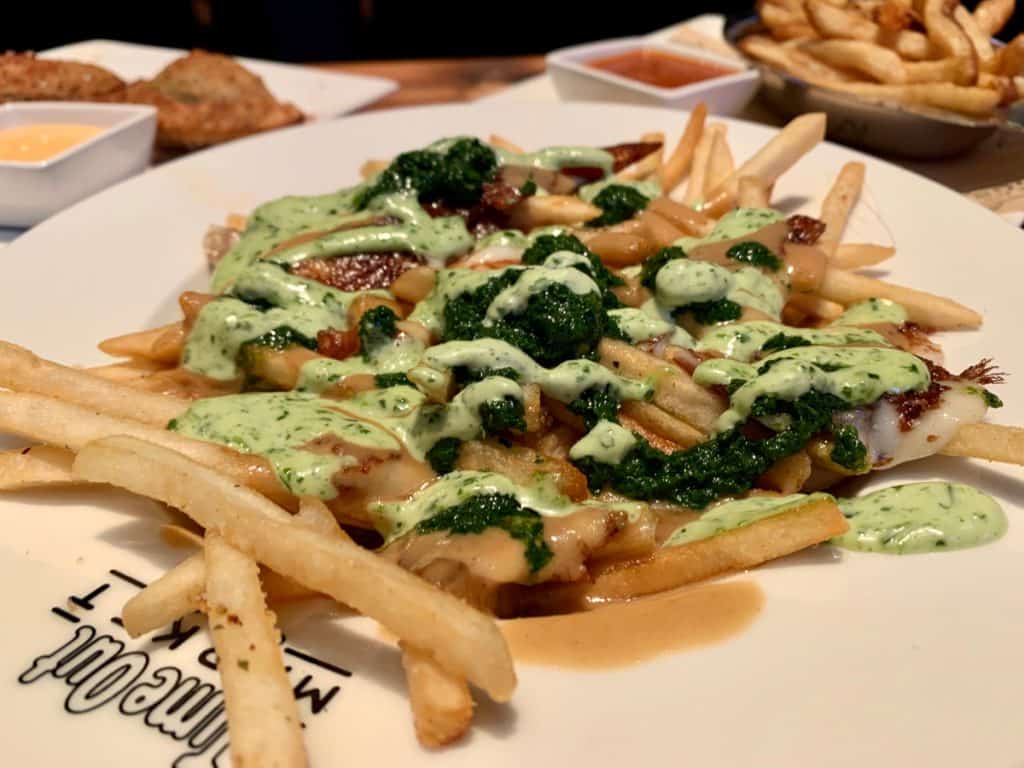 Mmm…duck fat.  These were delish—I mean they’re fries—though I figured the duck fat would make them a little crispier and more flavorful.  But still a winner.  I was super bummed I didn’t get to try the hot dogs though.  By the time we finished our first set of orders, I definitely didn’t have the stomach for a round two!

As soon as I heard this was one of the options, it shot to the top of the list.  Their parent location, Mott St, became known for their burger when it was named as one of the nation’s best.  Problem was, you could only get at the tiny bar and it was nearly impossible to get your hands on one.  So Mini Mott was born, and now there’s a location at Time Out.

This burger is a classic style with thin, almost-crispy stacked patties and super melty American cheese.  But then it takes a left turn with hoisin aioli, miso butter, sweet potato frizzles, pickles, and more.  It’s comforting and feels like an old friend, but brand-new at the same time.  As you can see, we topped ours with a fried egg for good measure. 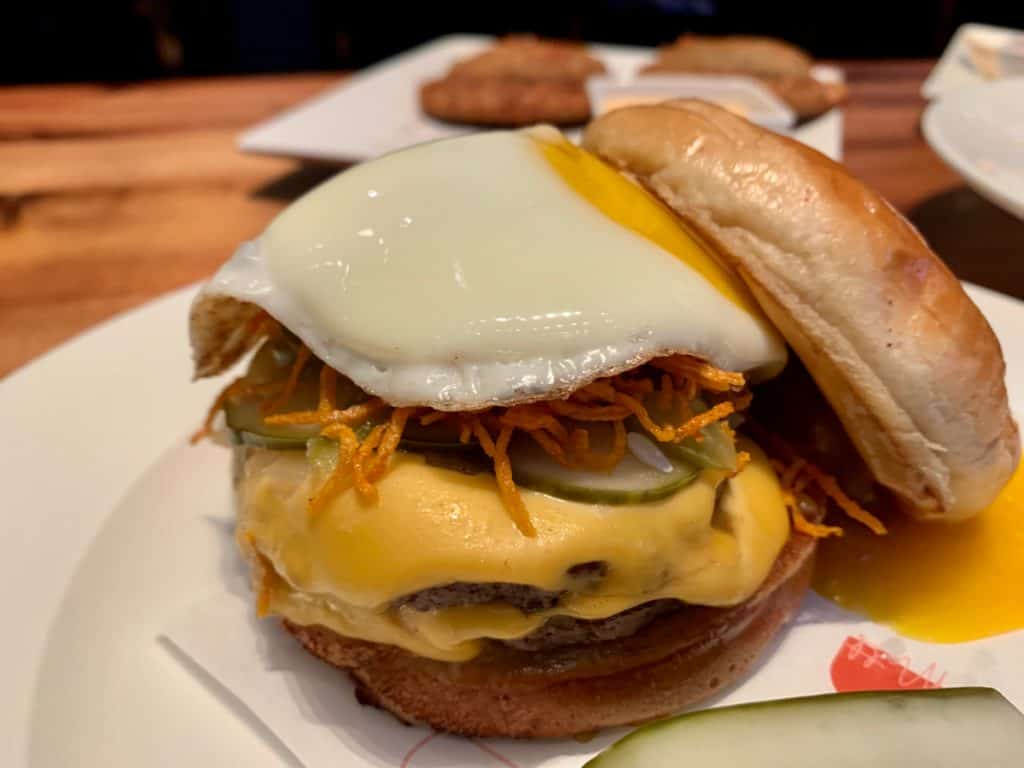 The second I saw this on the menu, I knew I’d finish my meal this way.  I’m a sucker for these Portuguese sweet egg custard tarts.  The James Beard award winner focused his Time Out location on the Portuguese cuisine in an homage to the original Time Out Market in Lisbon.  I wish I could have tried some of the other dishes on the menu, but had to satisfy myself with this amazing comfort food. 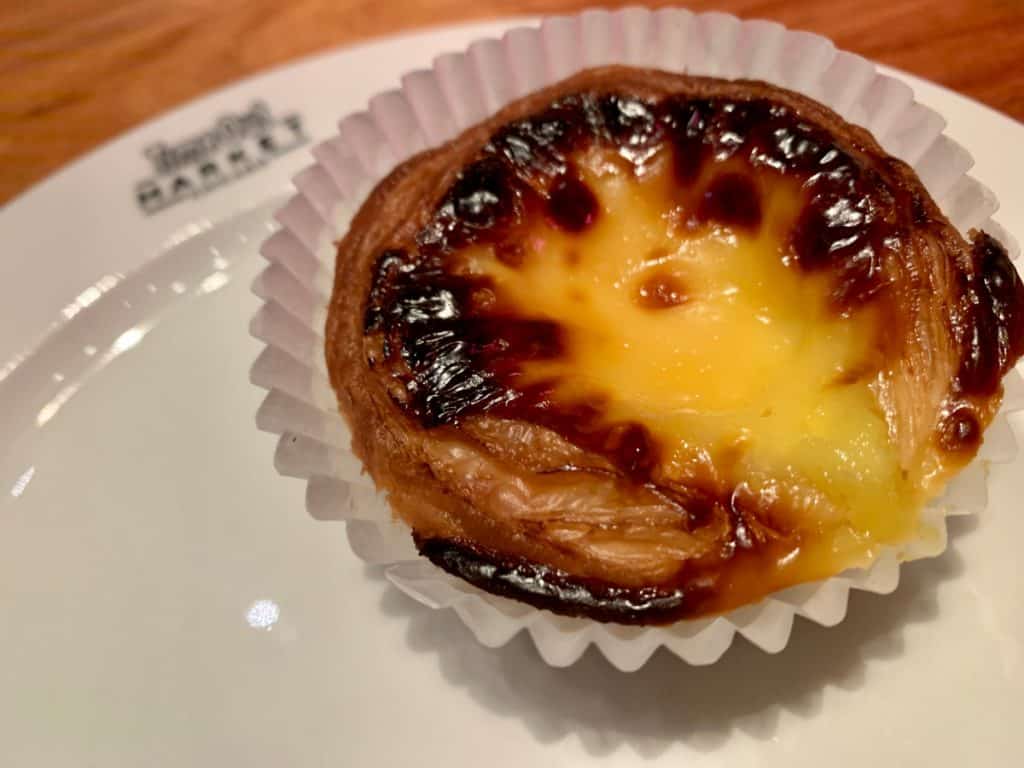 Honestly I’m bummed I didn’t get the Chicago Mix one—a flavor combo that’s an ode to the famous cheese and caramel popcorn mix.  But my peanut butter potato chip with chocolate coating was pretty darn good.  Odd having ice cream on such a cold night, but definitely swing by here and try one of their super interesting flavors. 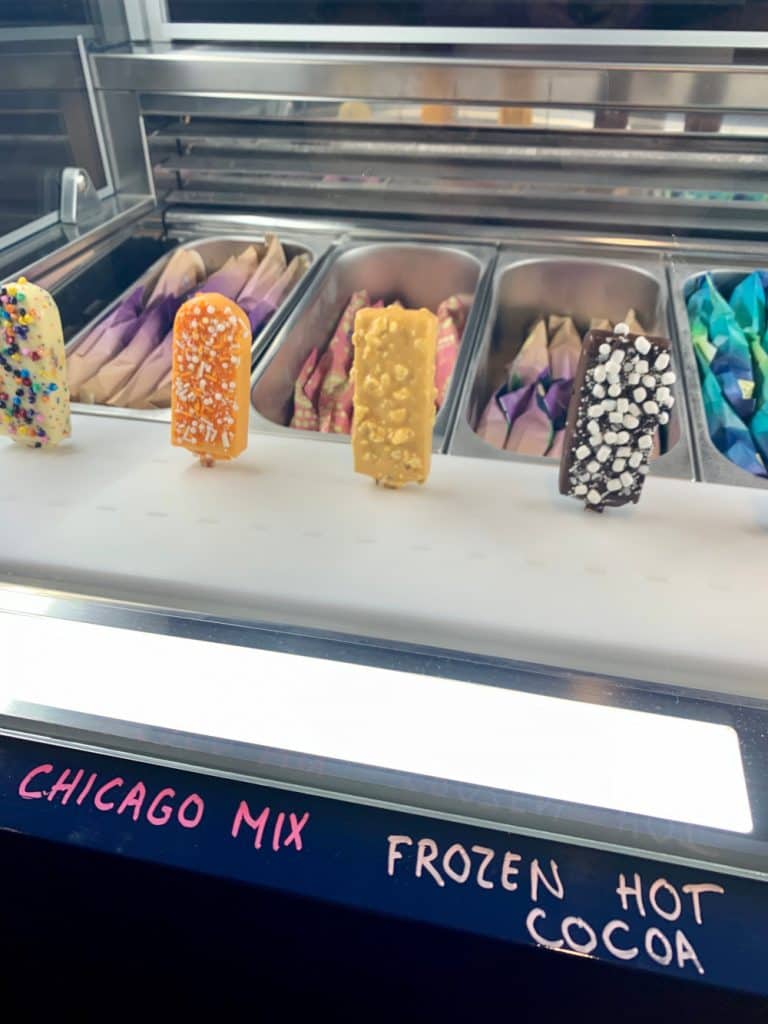 After completely stuffing ourselves, we climbed the staircase to the speakeasy on the second floor.  Tucked in the corner, you order at the window and then swing around the corner to covertly pick your cocktails up at a different window.

Run by the co-owners of Lost Lake (which won Best Cocktail Bar in America at Tales of the Cocktail), it’s a great way to end your evening. 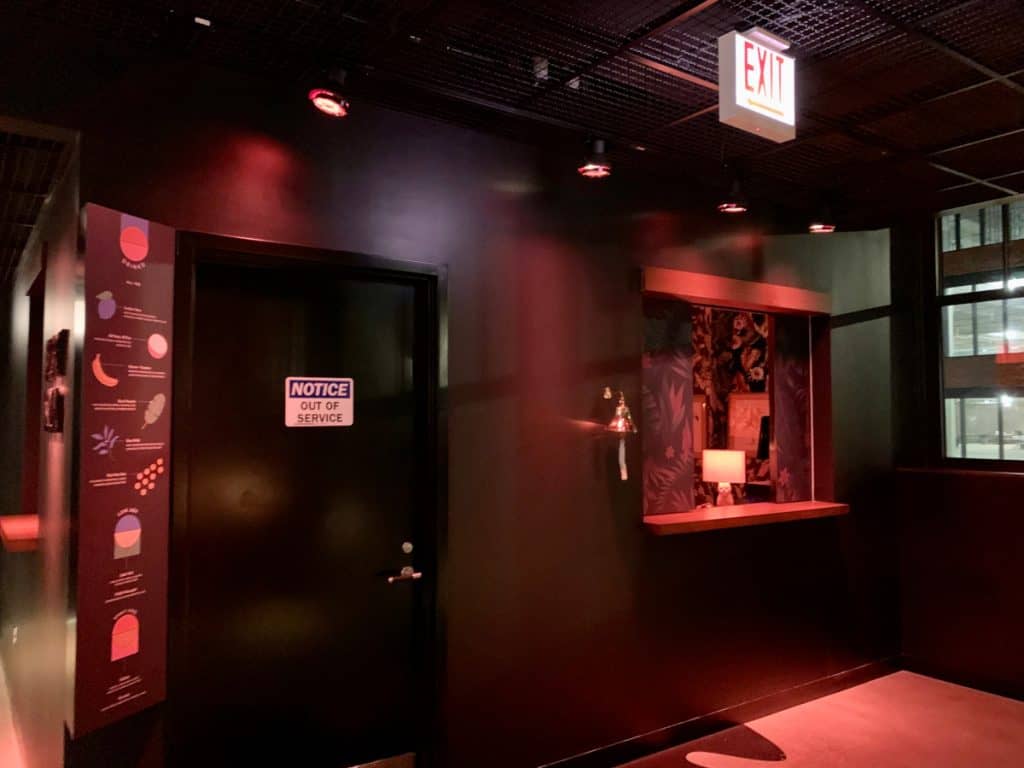 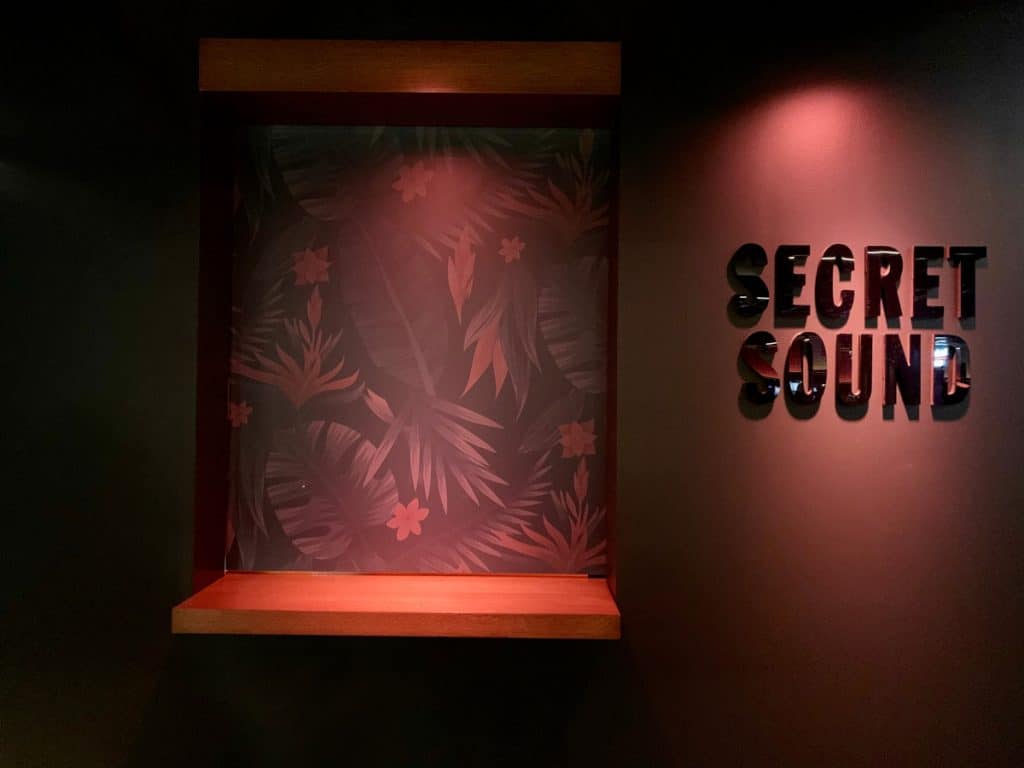 I tried the Ghosts + Empties, which is made from bourbon, Panamanian rum, overproof Jamacian rum, banana, and Fernet Branca.  I mean WHOA.  It’s the unassuming one that looks like an old fashioned, and it packs a punch! 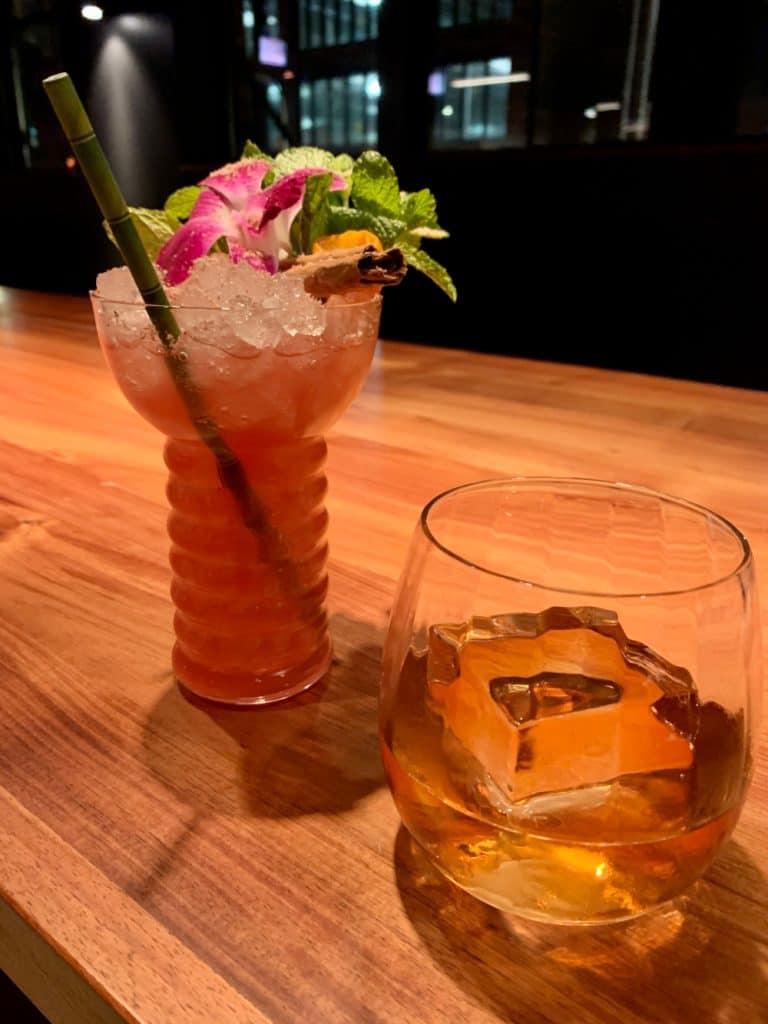 There’s a rooftop bar as well, but the cold and rainy December Chicago night wasn’t conducive to it.  Instead, we bundled up and braved the cold, headed over to another fun new Chicago venue…the Starbucks Roastery. 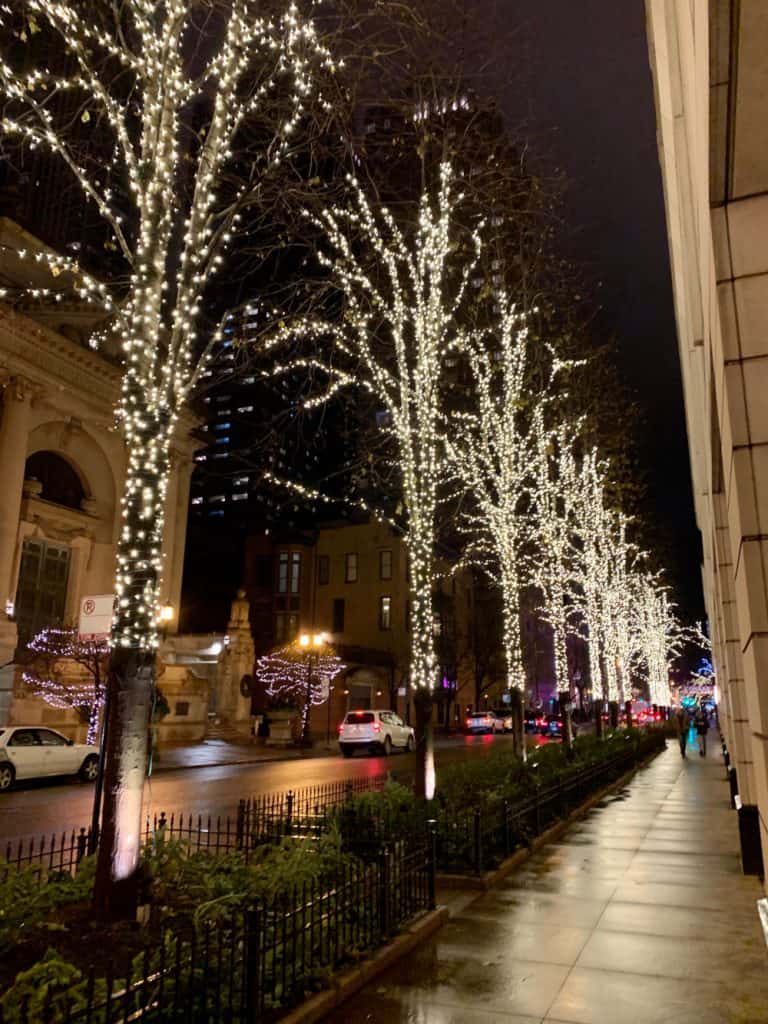 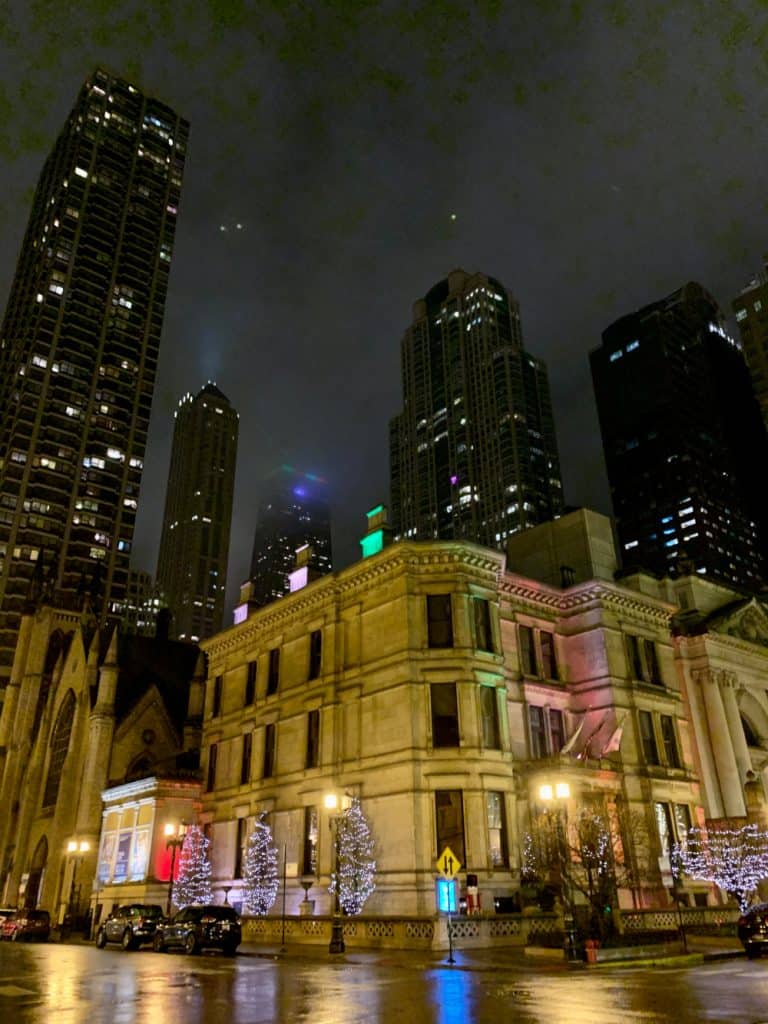 Depending on the night and the group, I’d 100% go back to Time Out Chicago to try more dishes…that Duck Inn dog is calling!  Have you visited, and if so what are your faves??  I’m already making my list for next time! 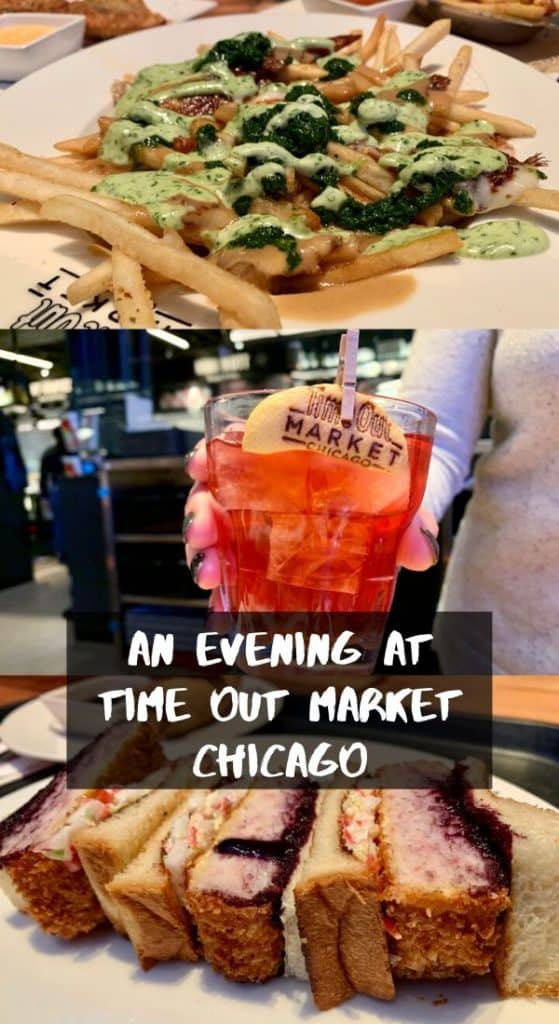 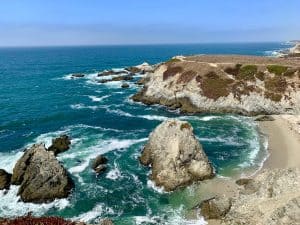 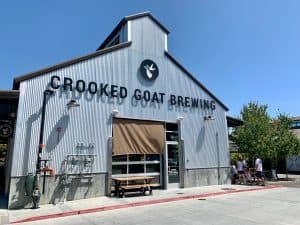 Where To Drink In Sonoma County When You Don't Want Wine