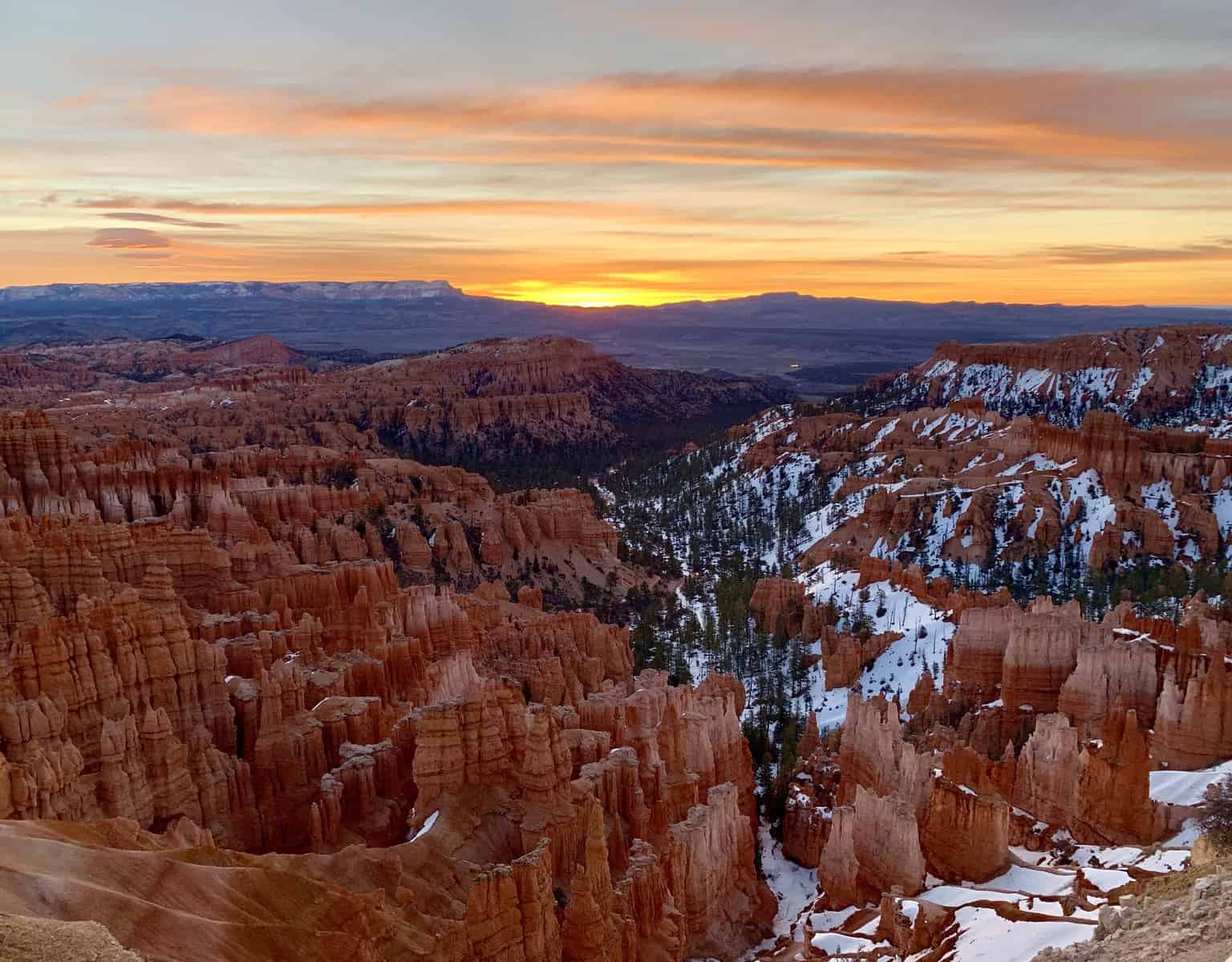 The diversity of natural beauty in the United States is really unbelievable, and southern Utah’s national parks lay claim to some of the most unique topography…but Bryce Canyon in particular.  Being in Bryce Canyon is like being on another planet, because the famous hoodoos jutting out of the canyon are so unique.  But sunrise at Bryce Canyon is an otherworldly experience that you can’t miss.

Even if you’re not a morning person (I am), if there ever were a day to wake up super early while on vacation—THIS IS IT. 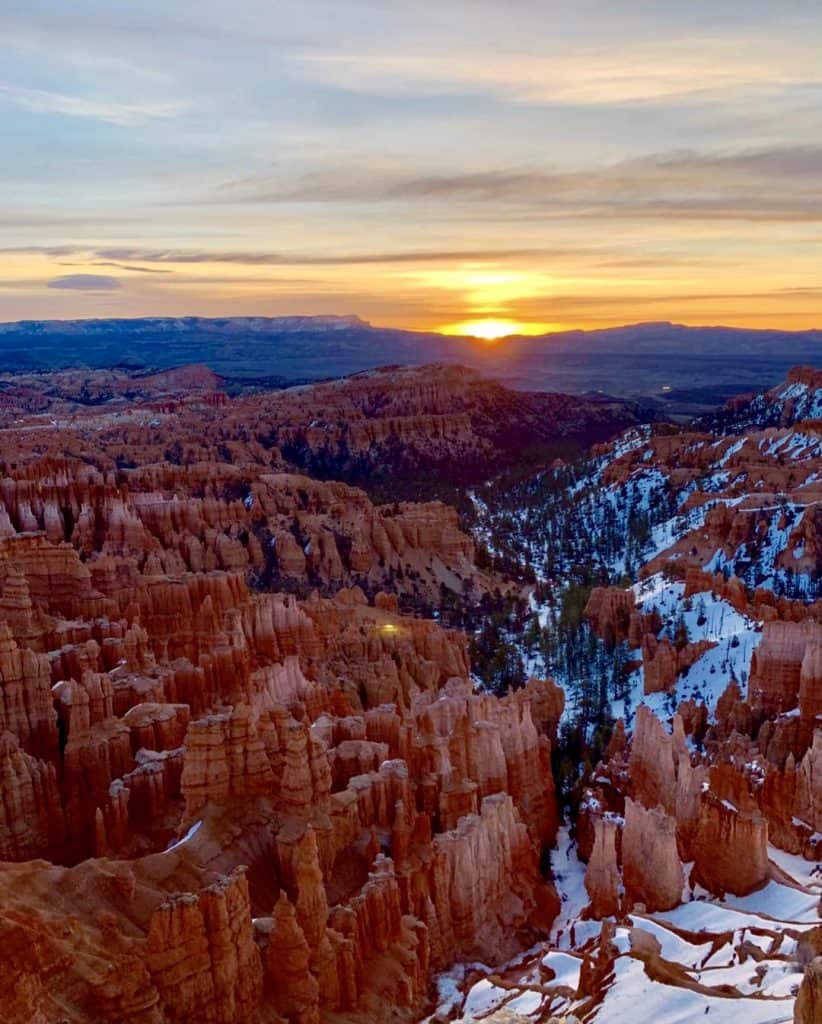 Where to watch the sunrise at Bryce Canyon

Because the amphitheater faces west, there really isn’t a *wrong* answer to this—sunrise at Bryce Canyon is pretty amazing anywhere.  And many people end up at Sunrise Point because…the name, mostly.  But Sunrise Point happens to be across the road from one of the only big campgrounds in the park, so it’s full of hustle and bustle and crowds.  Not my pick.

I chatted with one of the rangers there, and their recommendation was Inspiration Point, so that’s where we headed.  And in my opinion it was definitely the right choice.  As you’ll see from my pics, Inspiration Point gives you a super wide-open view of the hoodoos, the cliffs, and the horizon. 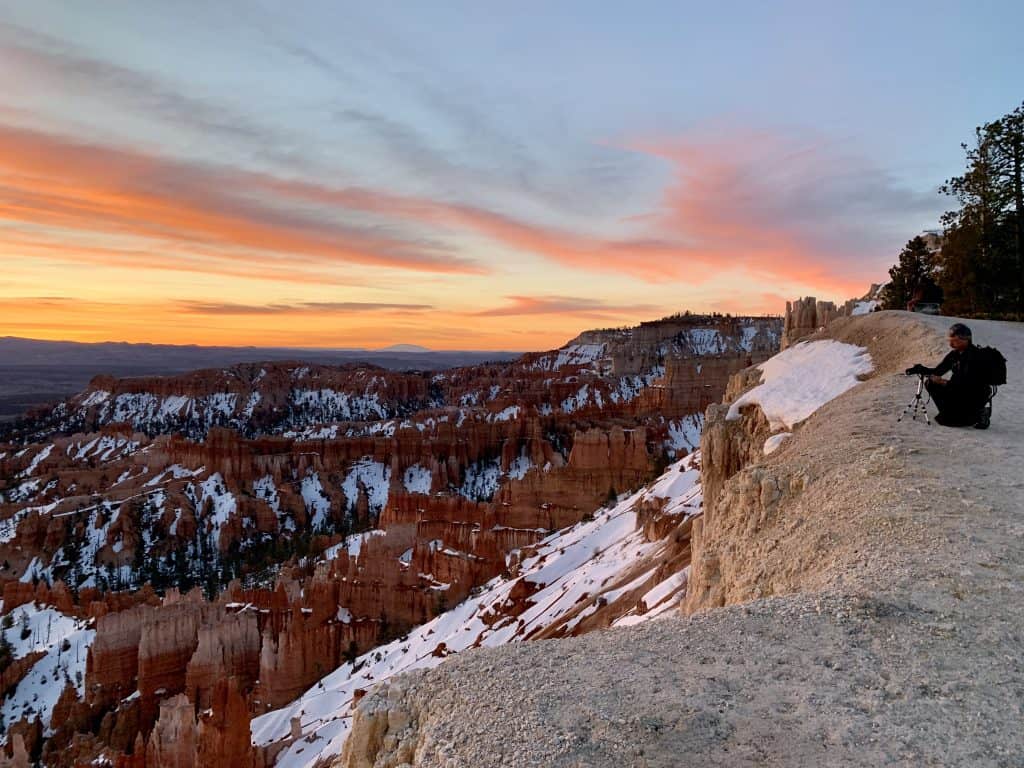 We got there as a deep purple-pink was beginning to creep across over the horizon.  We pulled out our cameras and got into place, and watched the light start to change. 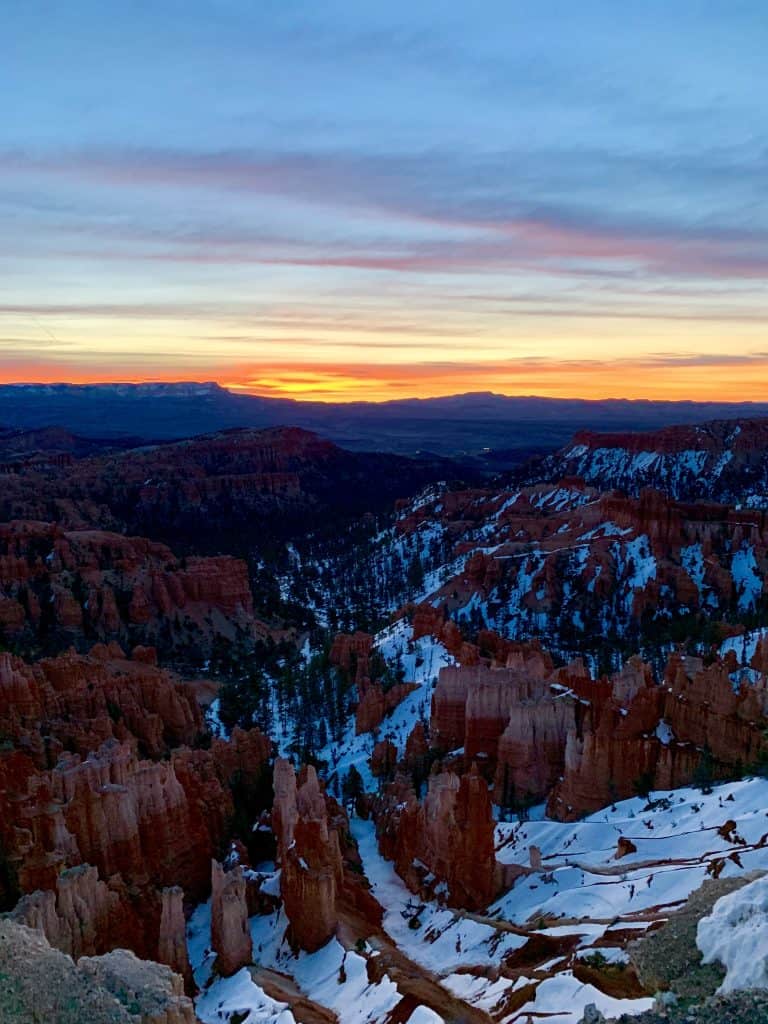 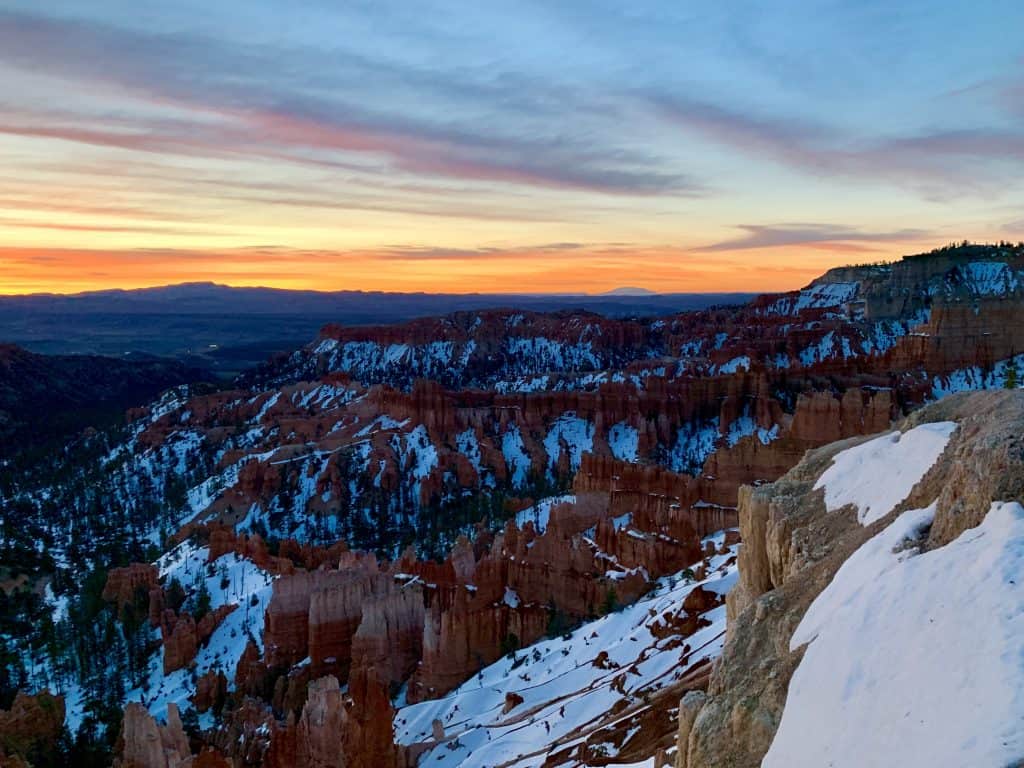 The pinks got richer and turned into streaks of orange and red, fading into yellows.  For me, breathing in the cold, clear air was wonderful in and of itself…but combined with the views around me it was almost therapeutic after a few months of my crazy, fast-paced work life. 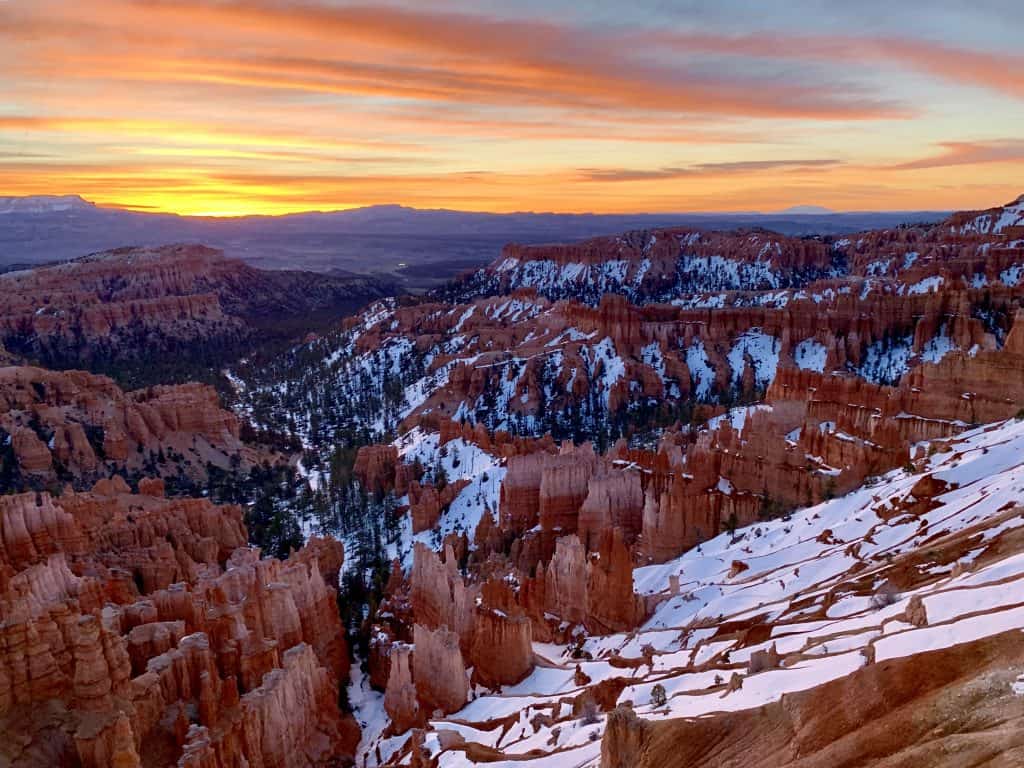 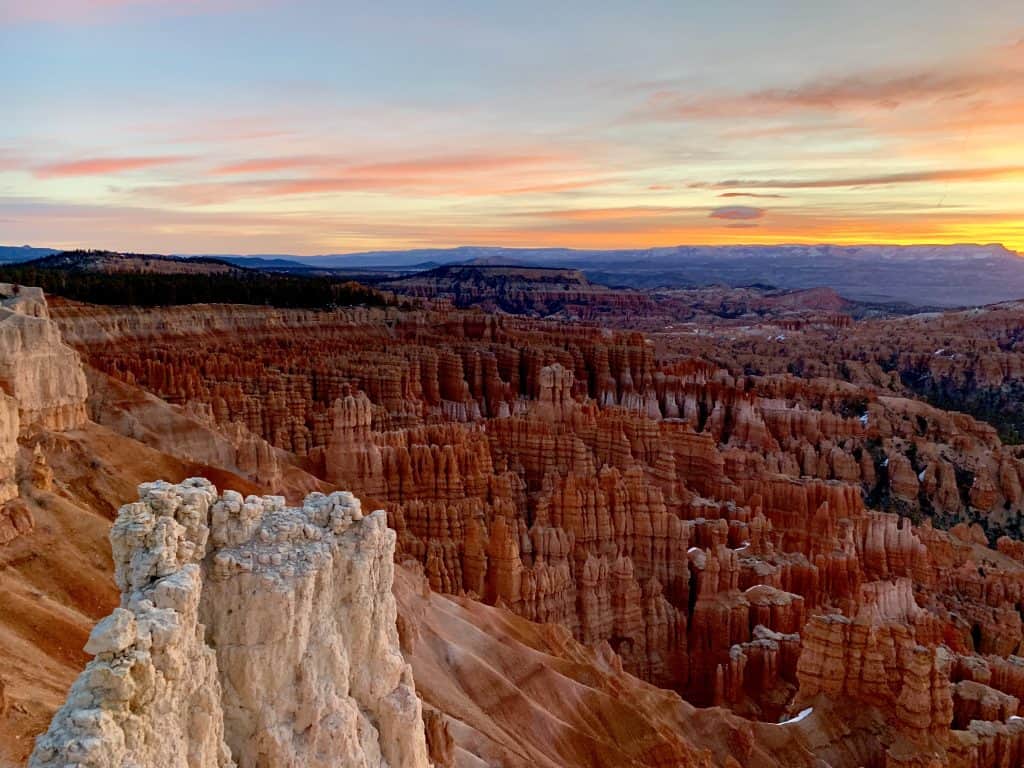 Desperately wishing for a giant latte, I tried to keep feeling in my hands and ears as I kept snapping pictures. 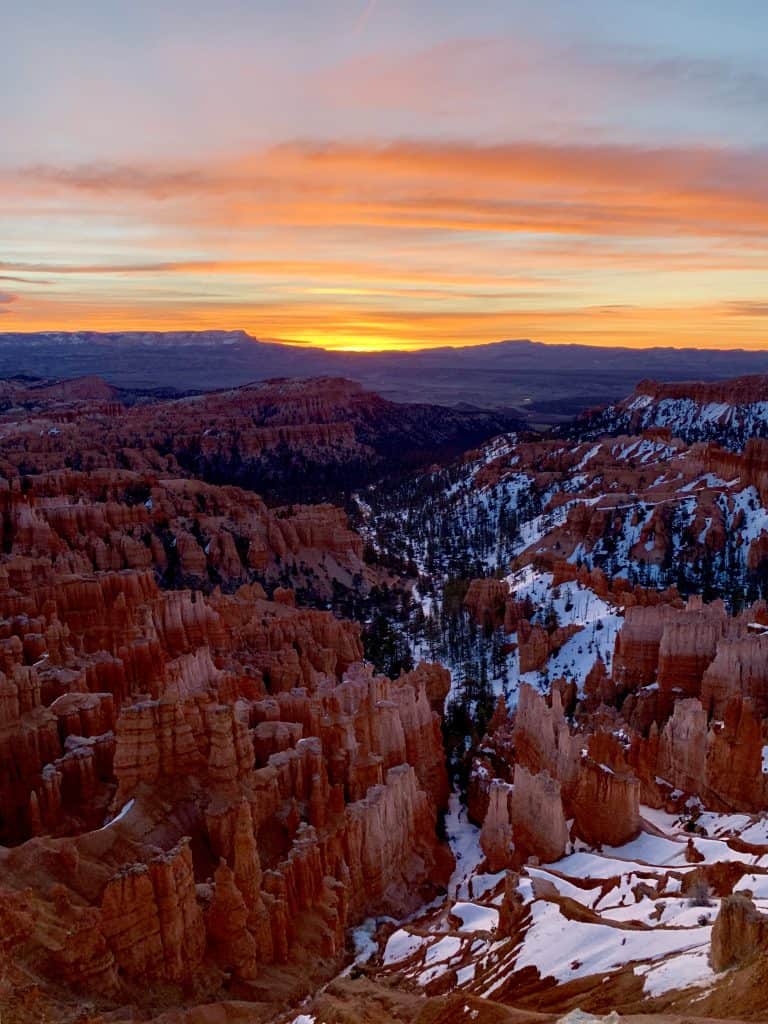 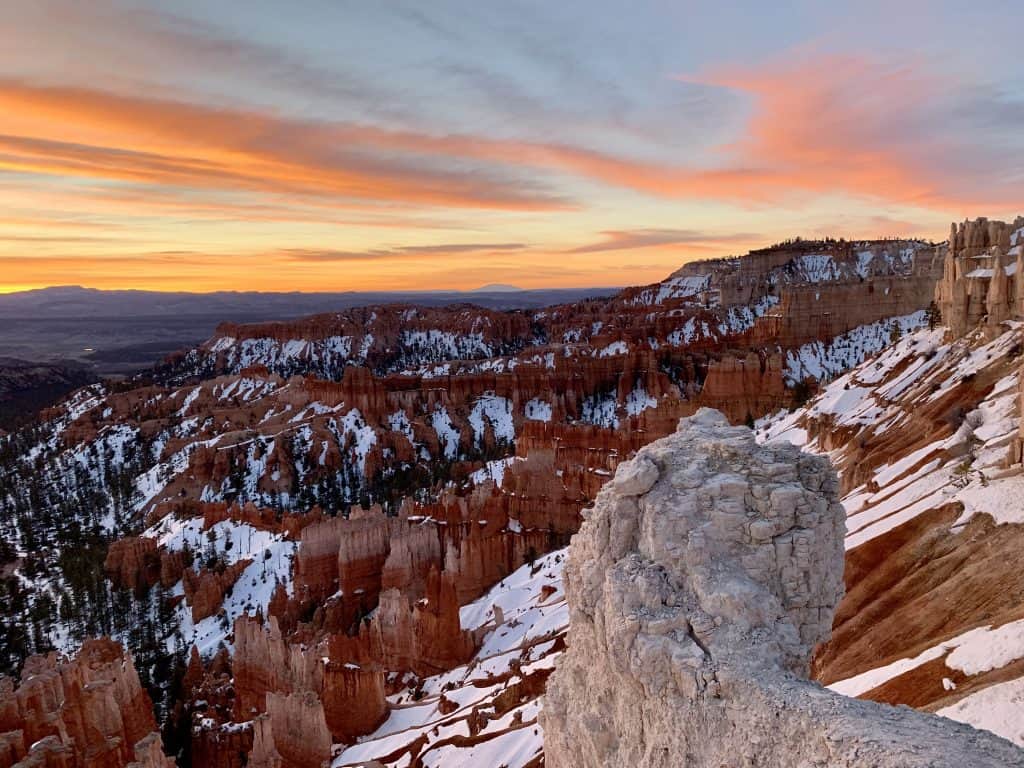 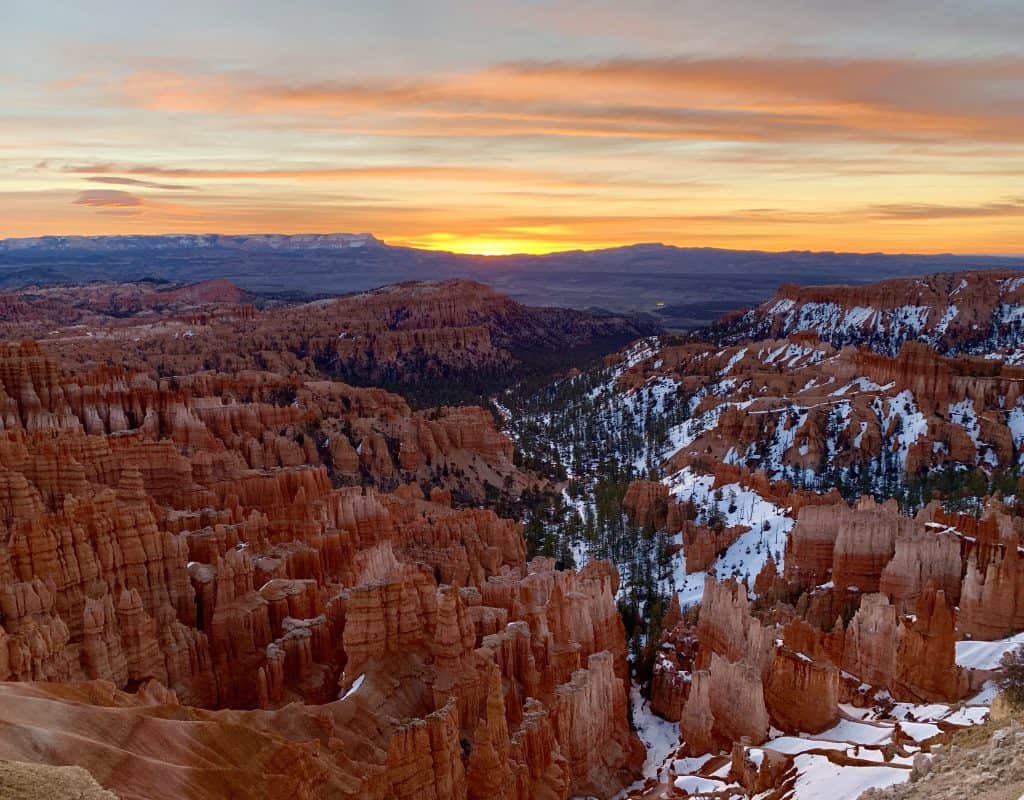 As the sun actually peeked over the horizon, it started hitting the tops of the hoodoos, lighting up the amphitheater.  The whole canyon had a glow to it. 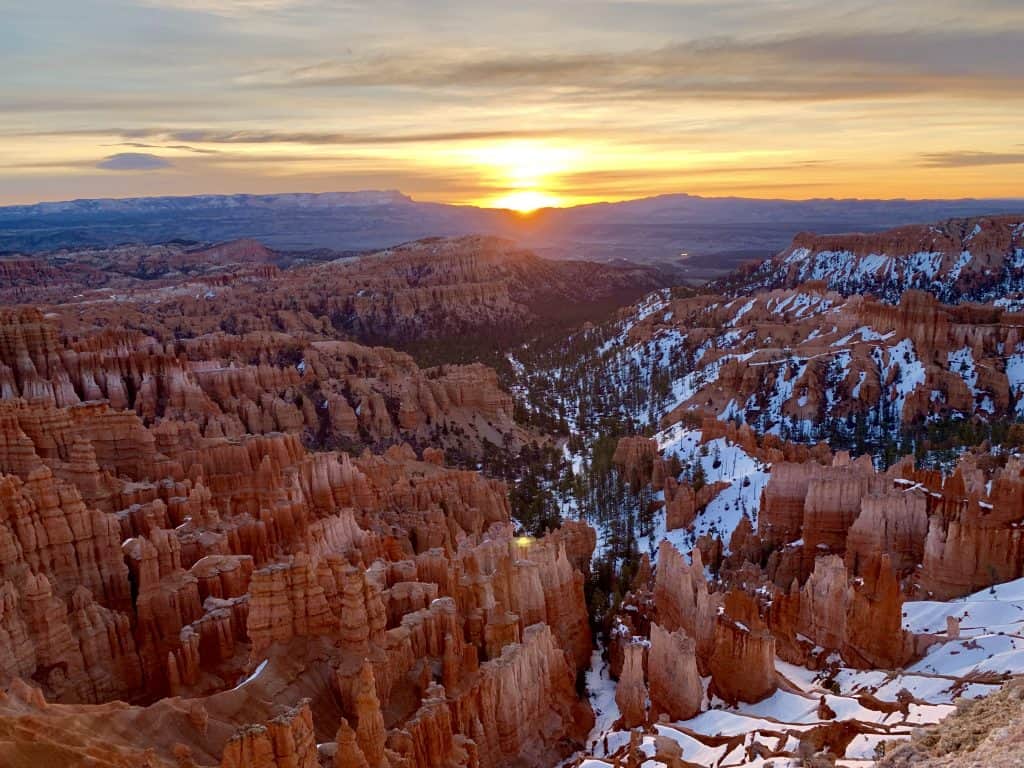 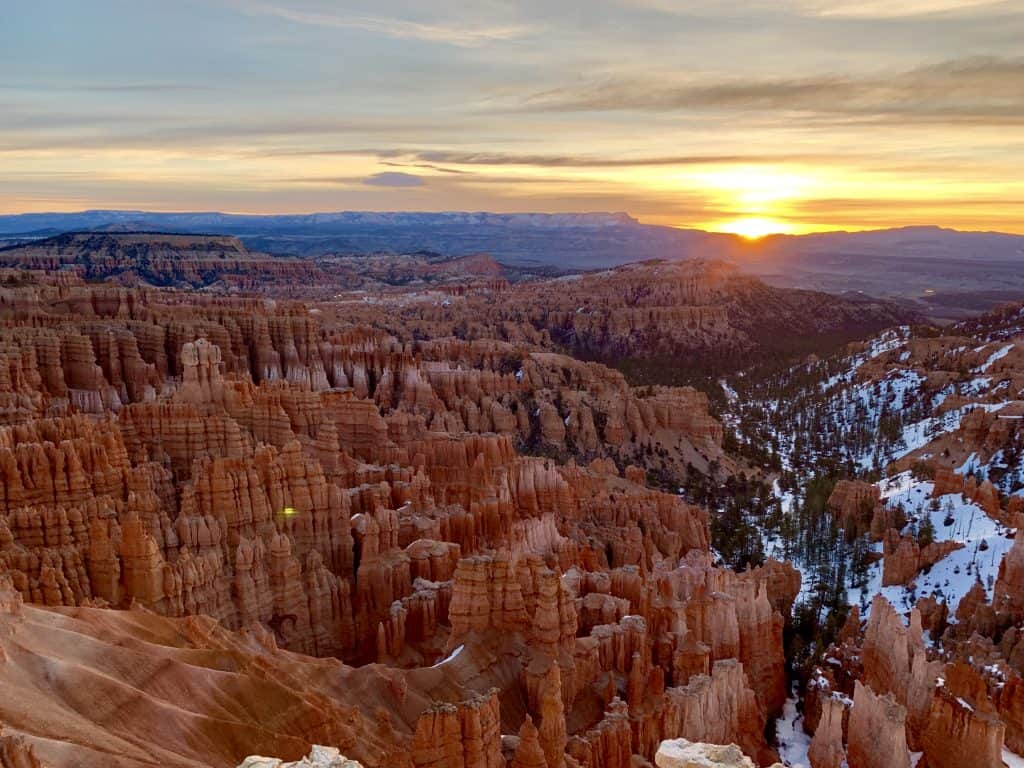 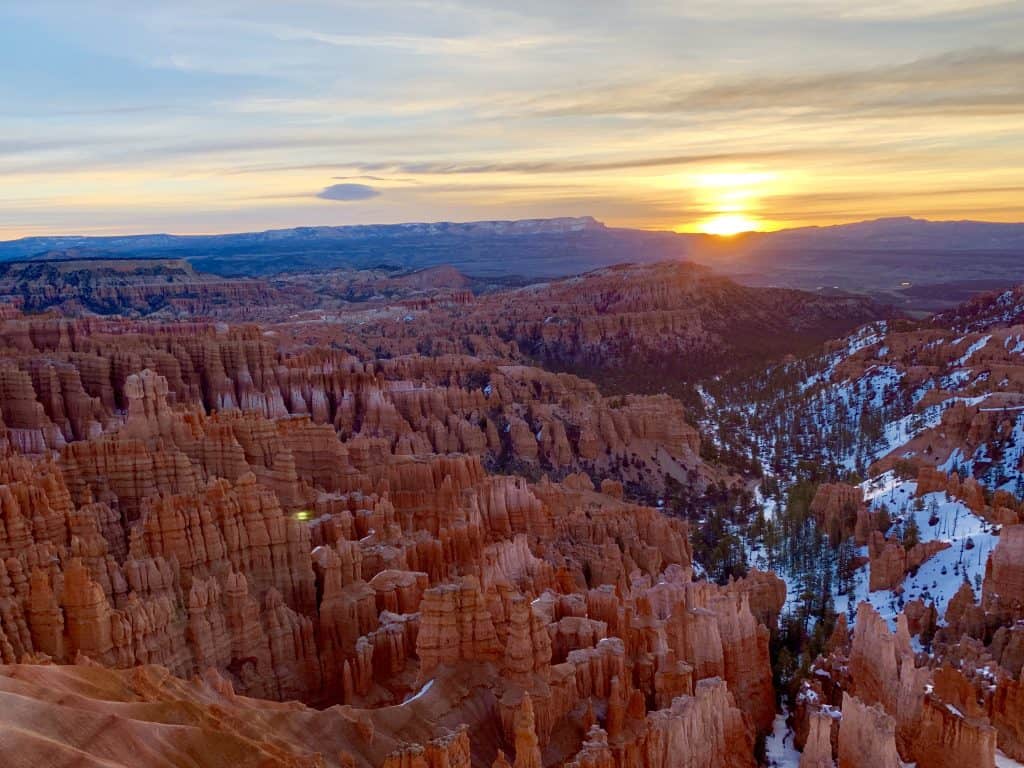 I’m really happy that there was still plenty of snow (even in early April), because it let the hoodoos stand out visually a lot more.  One thing I appreciated was that even though there were a number of people there for the sunrise, it was a super quiet, peaceful feeling—no one was being loud or obnoxious, everyone was just in awe of what we were experiencing. 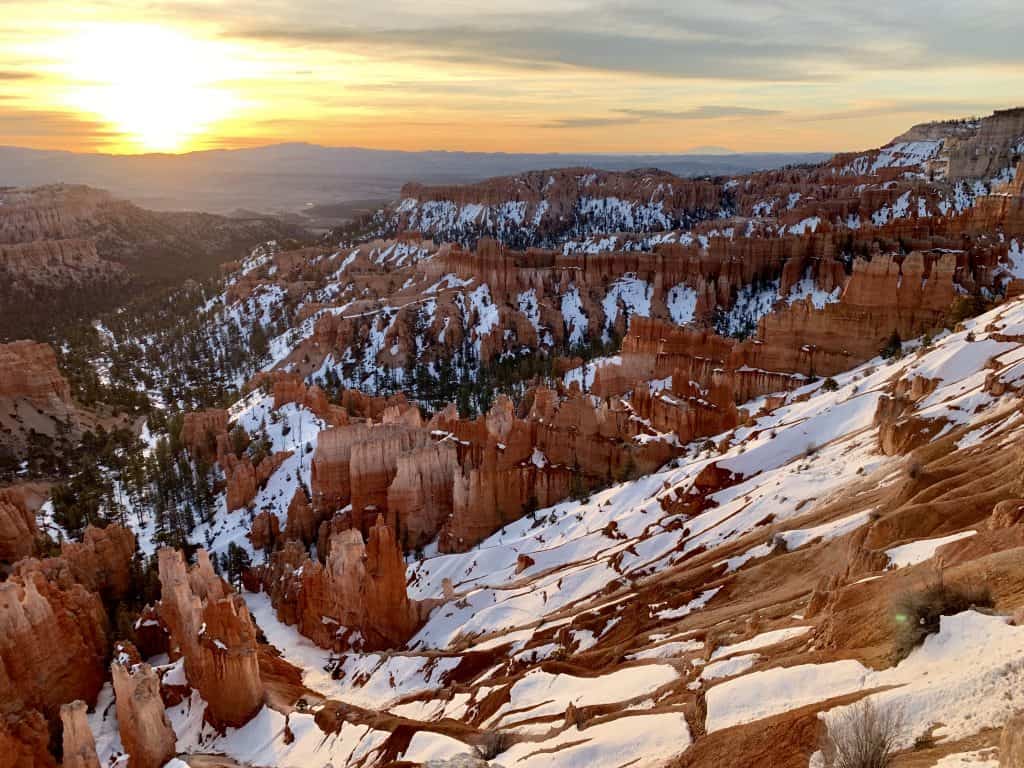 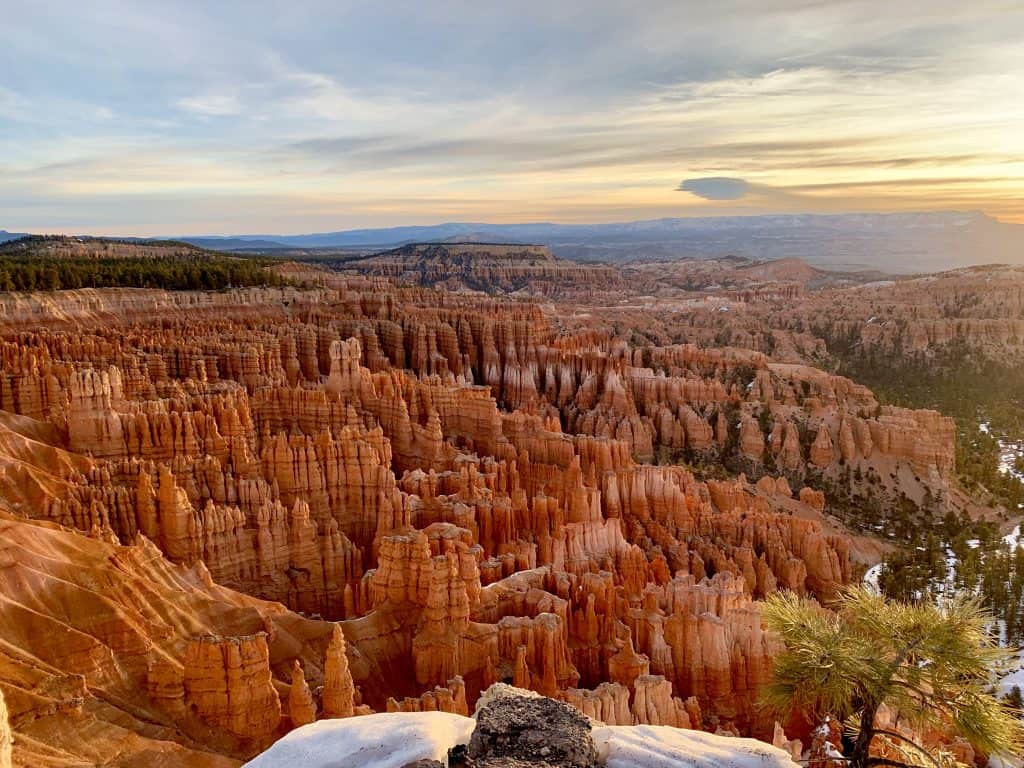 Once the sun fully came over the horizon, the spell was broken and we all realized how chilly we were.  Stomachs rumbling and wishing for coffee, we wandered back to our cars, but couldn’t shake the feeling that we’d seen something super special!  You can see all about our entire trip in this deeper post on our amazing southern Utah roadtrip to Zion & Bryce Canyon.

Where to stay:  Bryce Canyon Lodge (the only one inside the park) 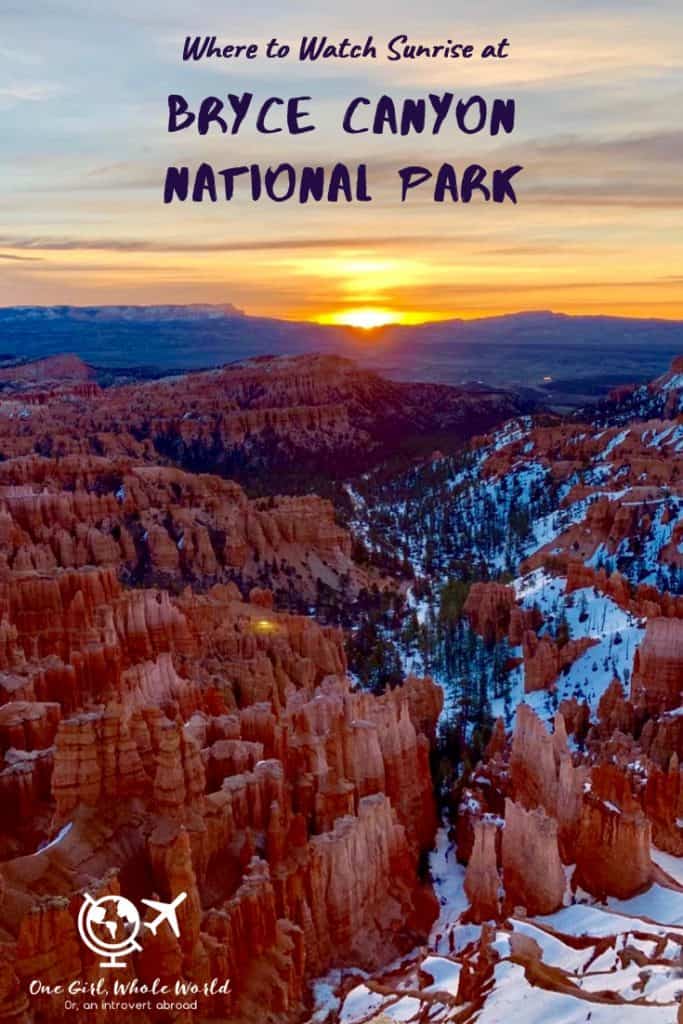 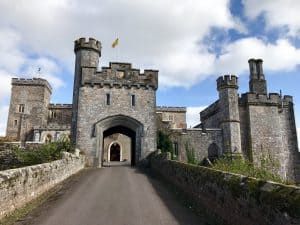 Everything You Need To See & Do In Devon, England 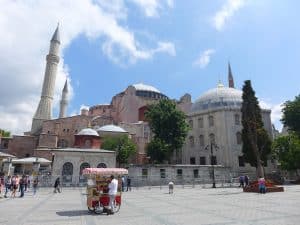 Layover Plans: What to Do With 5 Hours in Istanbul

A stunning view from the Point Imperial stop along

Snow Canyon State Park flies under the radar a lit