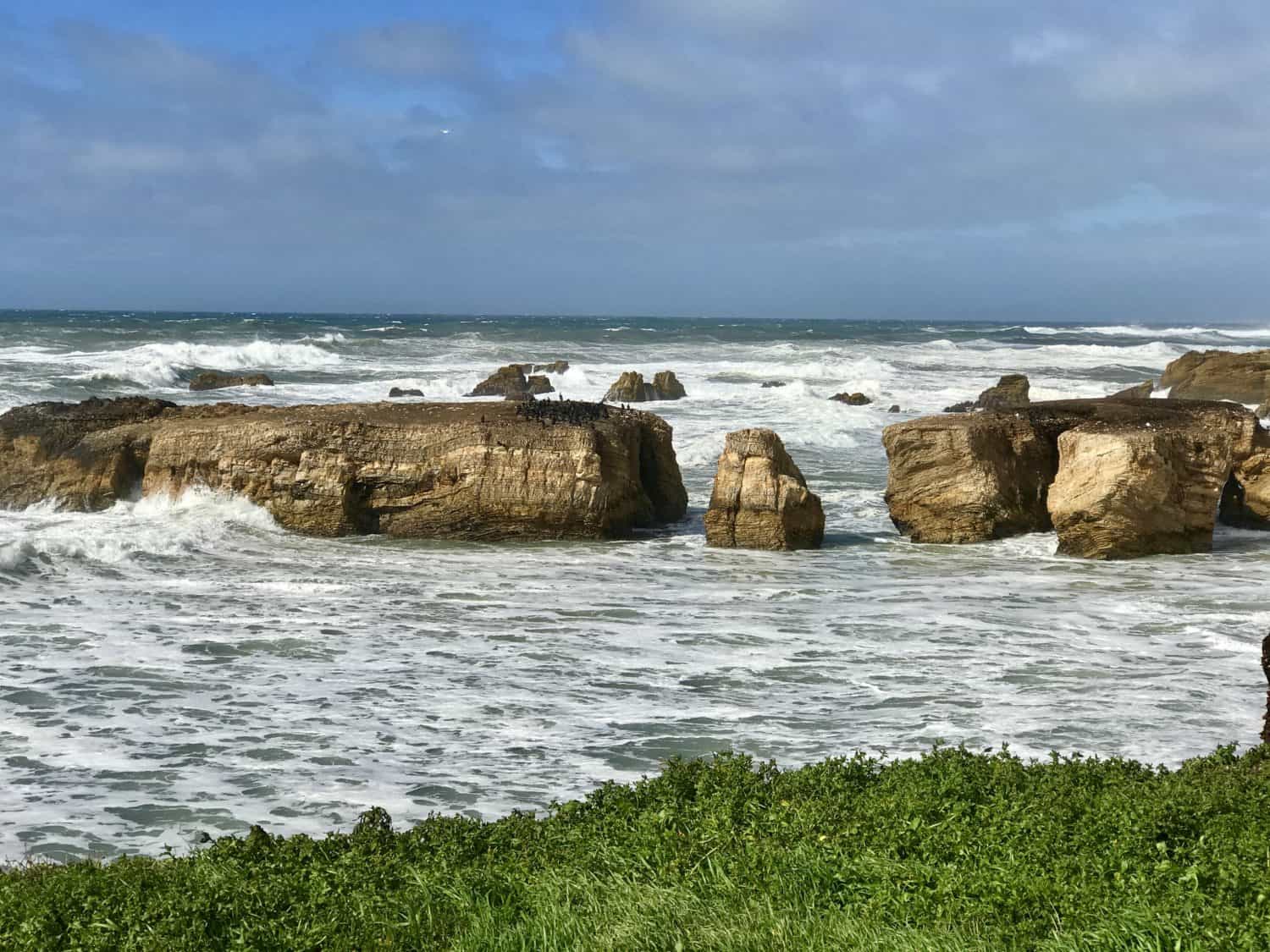 I generally have good travel karma.  But when things go wrong, they tend to go *very* wrong.

I was excited to head to the San Luis Obispo/Arroyo Grande, California, area for my best friend’s wedding over President’s Day weekend.  I had a bachelorette dinner Friday evening and the wedding itself Sunday, but I knew that I’d have Saturday, as well as almost a full day Monday, before my flight to kill.

I did my research ahead of time, and had all sorts of things planned since there’s so much natural beauty and great wine, and I didn’t know when I’d be back. 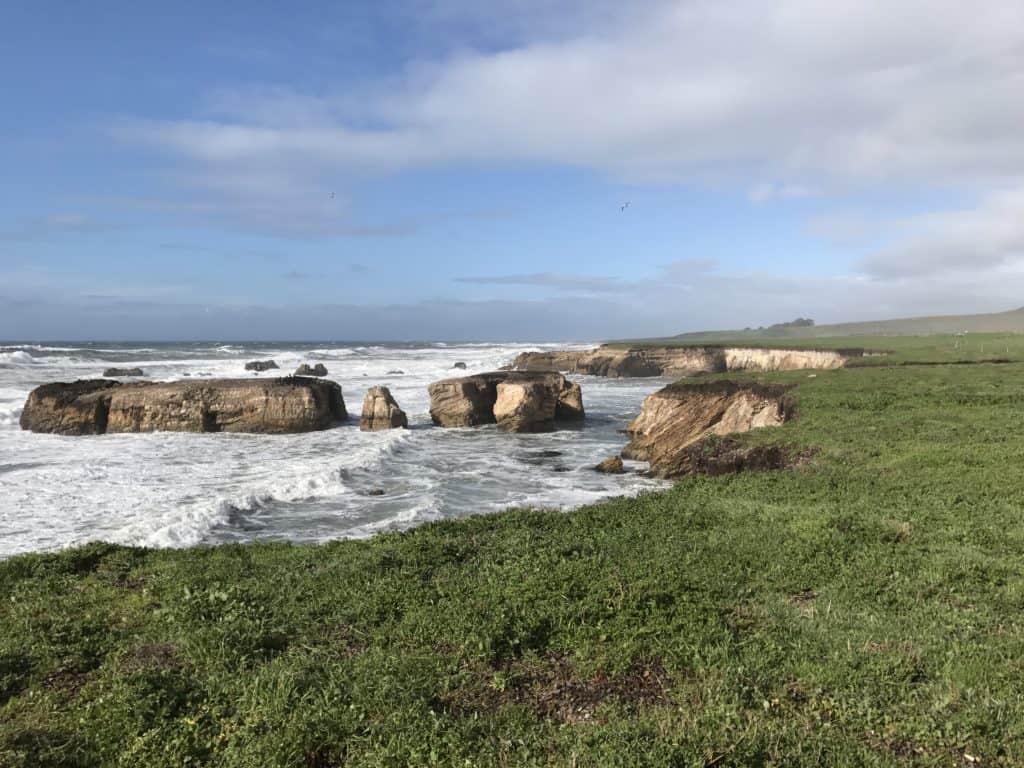 But then it all went so terribly awry… 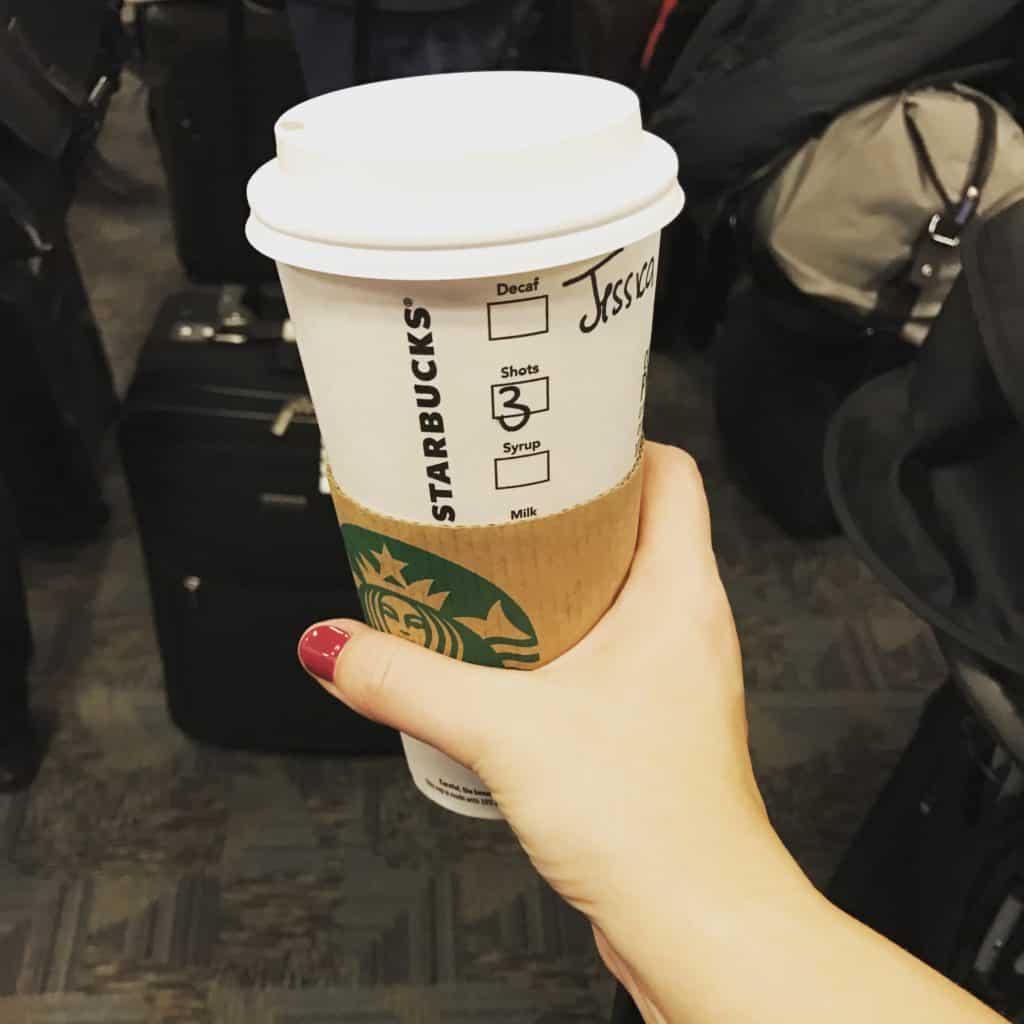 I woke up at 4:30am to catch my 7am flight, having already worked almost 60 hours in four days.  I boarded my flight to San Francisco and hopped on the wifi as soon as possible, needing to work every single minute possible.  I was a couple hours into the flight when I got an email saying that my connecting flight had been cancelled and I’d been re-booked for the next morning (which wasn’t going to work due to the aforementioned bachelorette dinner).

After waiting in line at SFO for 45 minutes only to be told United couldn’t do anything for me, I had to rent a (very expensive) car and drive 4 hours in torrential rain down to San Luis Obispo (to drop off the rental car and pick up my other one), then make it to my hotel in time to get pretty. 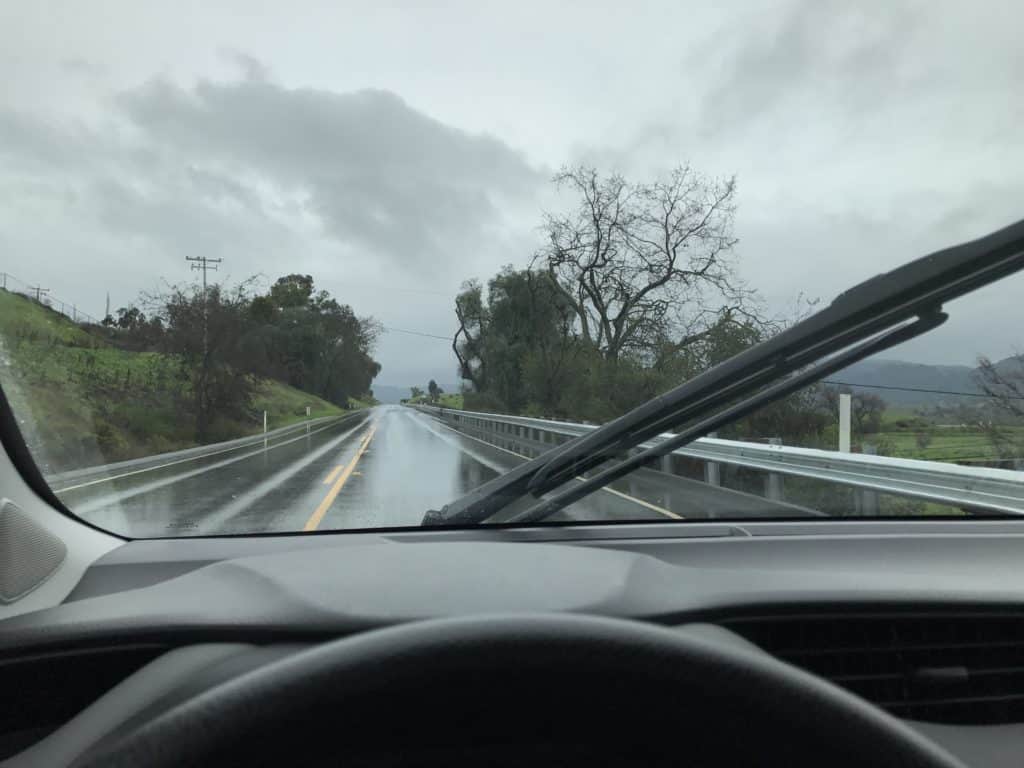 I was on conference calls the entire time except the hour and a half when I was in a total cell dead zone (with two roads closed due to rockslides).  It was…interesting.  After dinner I basically face-planted on my bed, having had quite the adventurous day. 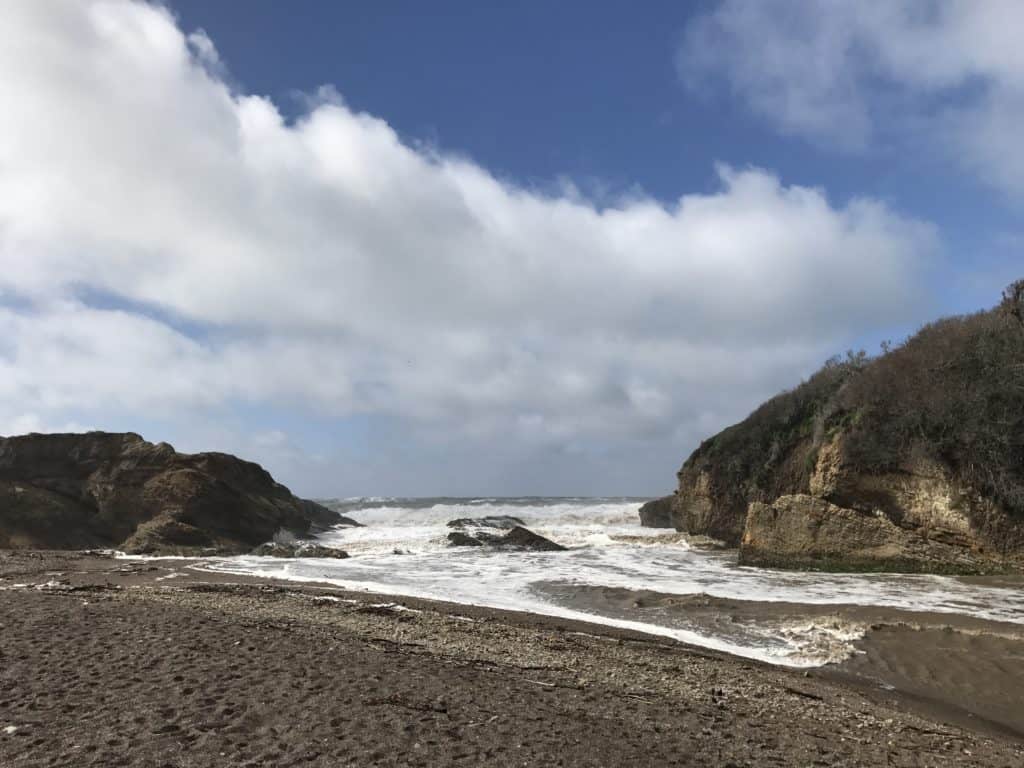 So why am I talking about my bad travel juju on this trip?  Well, I had quite a lot of activities planned for the weekend, but due to all-around bad luck—oh, just wait, I’ll explain the rest at the end—I only got to do one of them.  But it was a pretty amazing one. 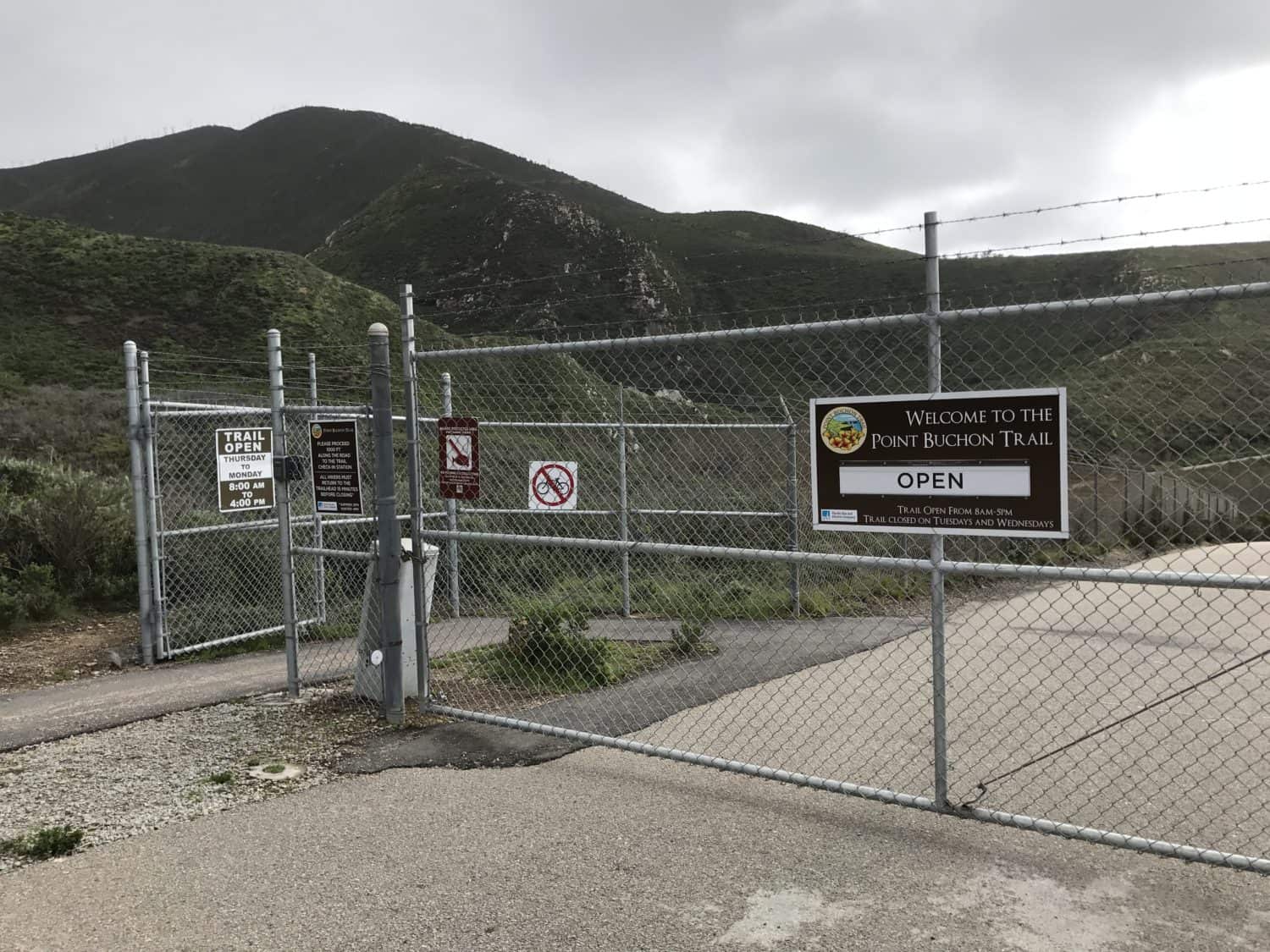 The weather all weekend was really crappy, not at all the sunny California coast you expect.  They were having the “storm of the century”.  I’m pretty sure the storm was named Lucifer…not making that up, I legitimately think that was its name.

So basically I blame the person who named the storm.  And as I sat through hours and hours of wind, rain, and stony gray skies, I saw my hopes of breathtaking coastal hiking fading away. 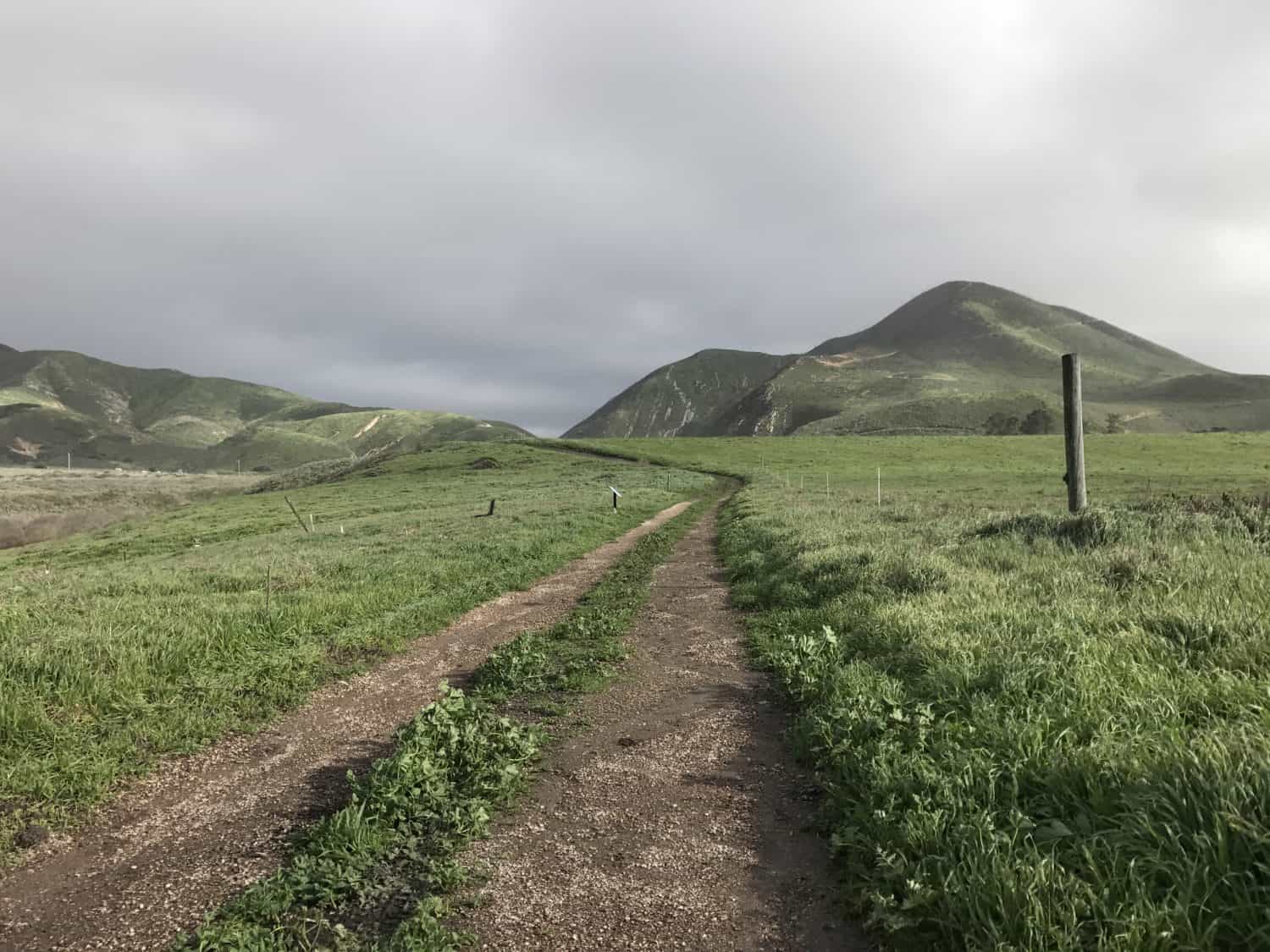 But in looking at the weather forecast all day Saturday, it looked like I could catch a few hours where the rain would stop, so I decided to gamble and drive up to Montaña de Oro State Park.  It’s an easy 30-40 minute drive from where I was staying in Arroyo Grande, and offers scenery that punches you in the face.

I had one destination in mind, though—the Point Buchon Trail. 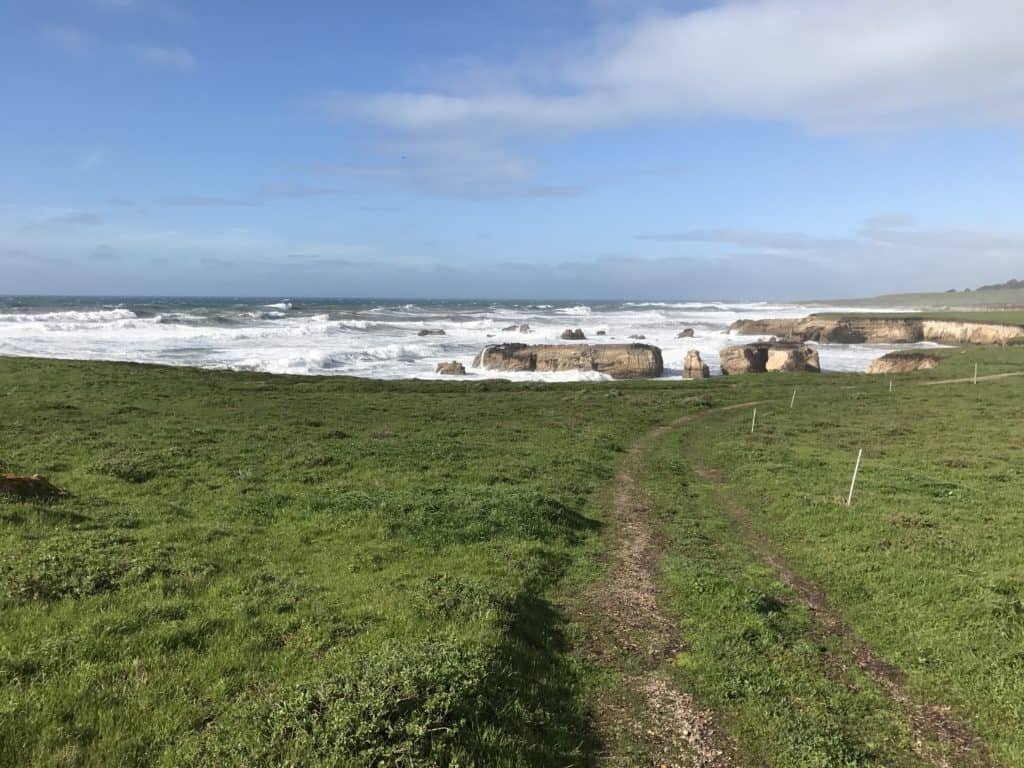 An lo and behold, the minute I stepped onto the trail, the gray clouds parted and sunny blue skies shined.  It was seriously the nicest hour of weather we had all weekend.

I started along the path and went toward the sinkhole first.  How cool is this?! 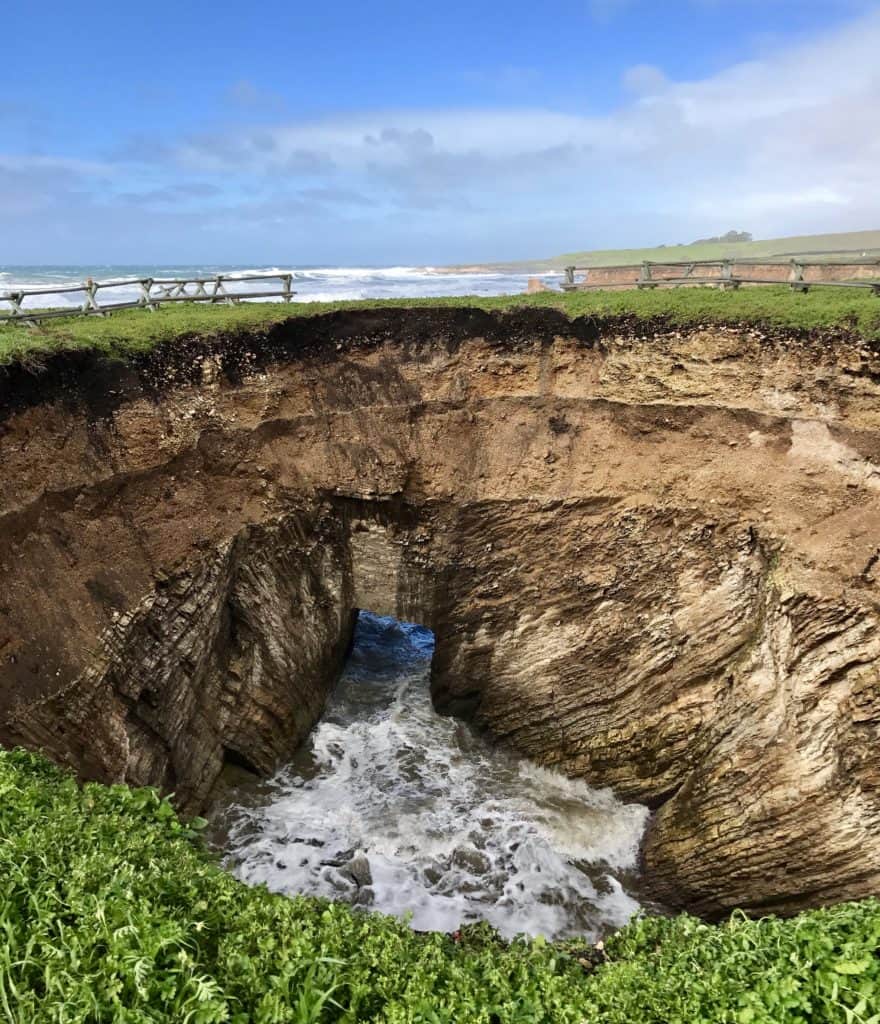 I couldn’t stop taking pictures every few feet.  Despite the sun and blue skies, the wind was still insane—you can tell from my crazy hair.  It looks like someone electrocuted me, and I was quite windburned when I got back.

It unfortunately meant that there was salt spray blowing at my camera lenses as soon as I left them exposed, which resulted in quite a few foggy pictures, but some still turned out quite well. 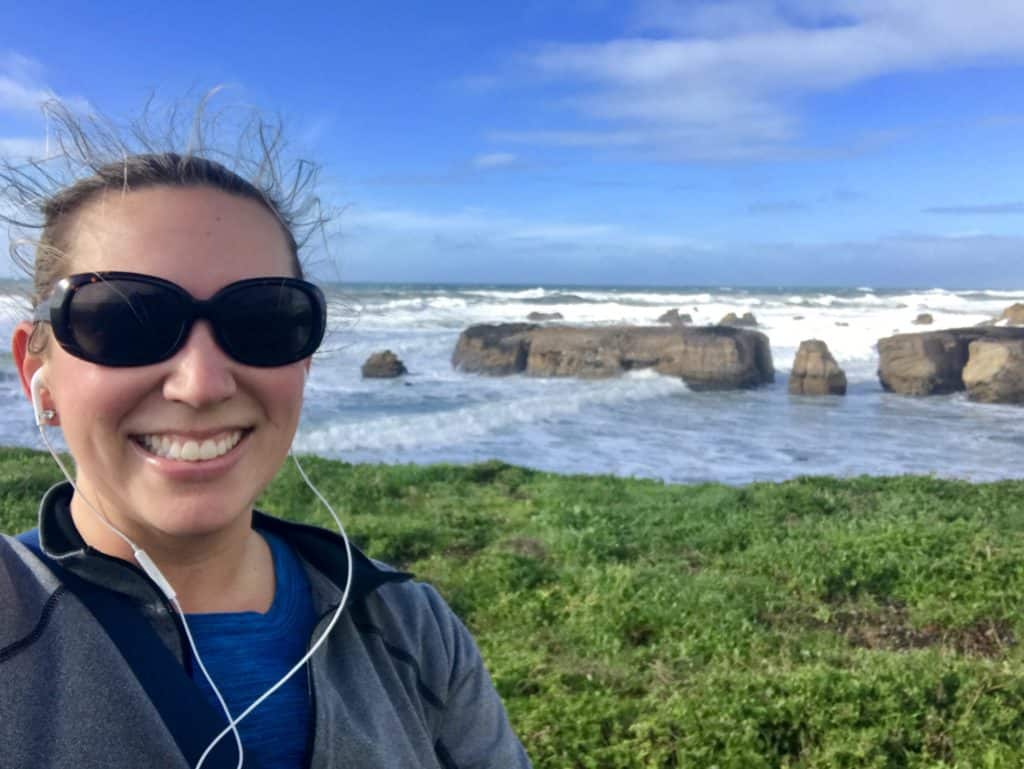 I was obsessed by this grouping of rocks, and the flock of birds that had camped out on top of them.  How cute are they?!  They seemed like a Disney movie waiting to happen.  Appropriate, actually, because lighthouse and sea cliff scenes from Pete’s Dragon (the old one from the ’70s) was filmed here. 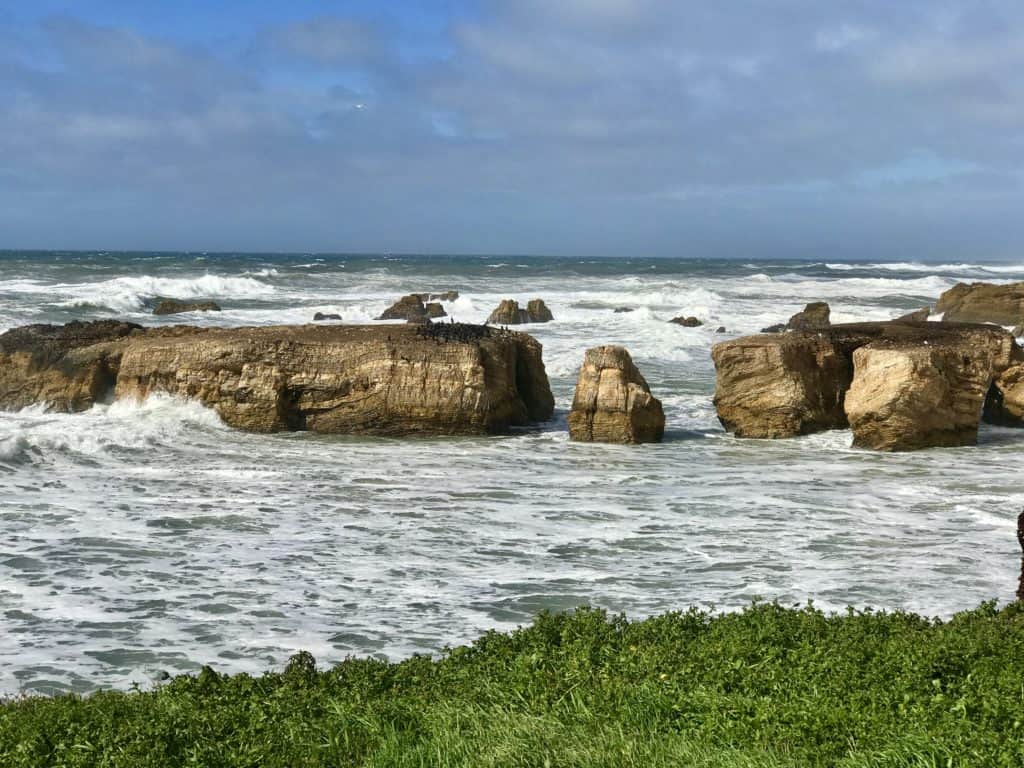 This walk was so pretty, and I couldn’t keep my eyes off of the constantly-crashing waves.  You’d think it would get ho-hum after a while, but every wave looks different to me. 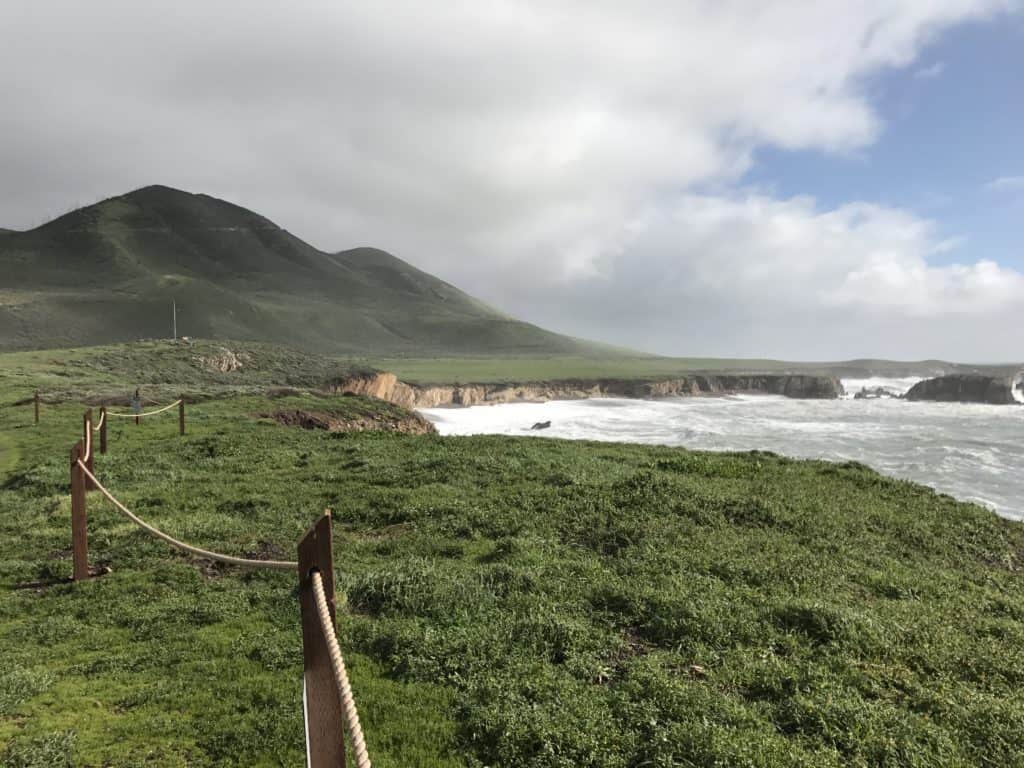 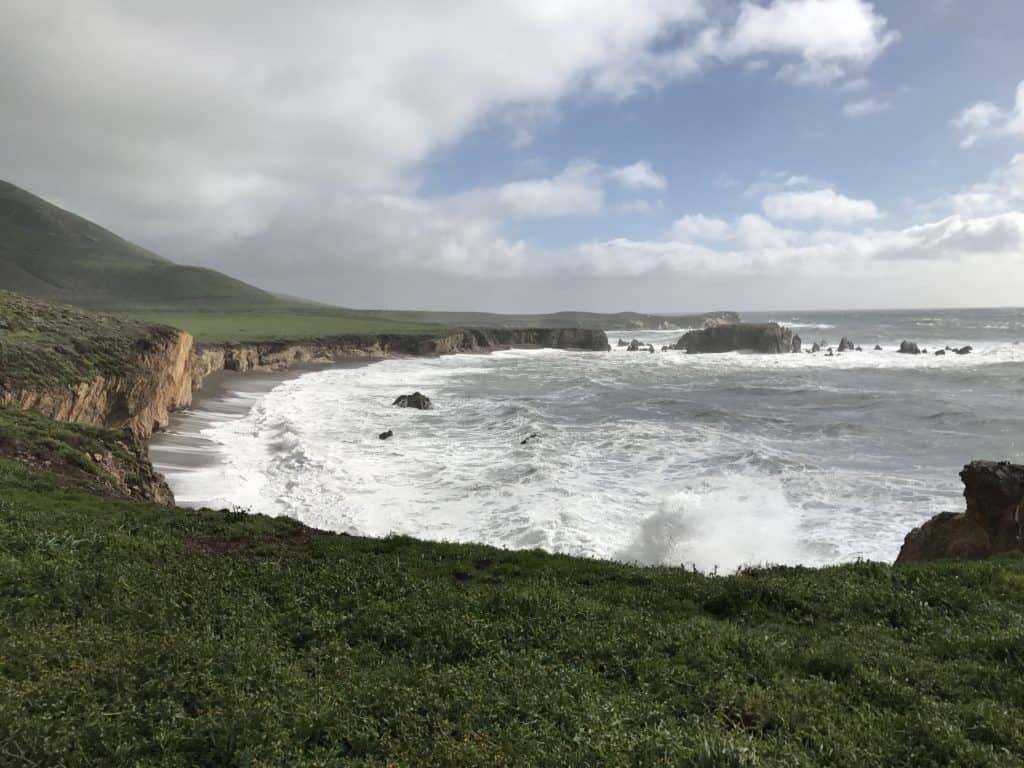 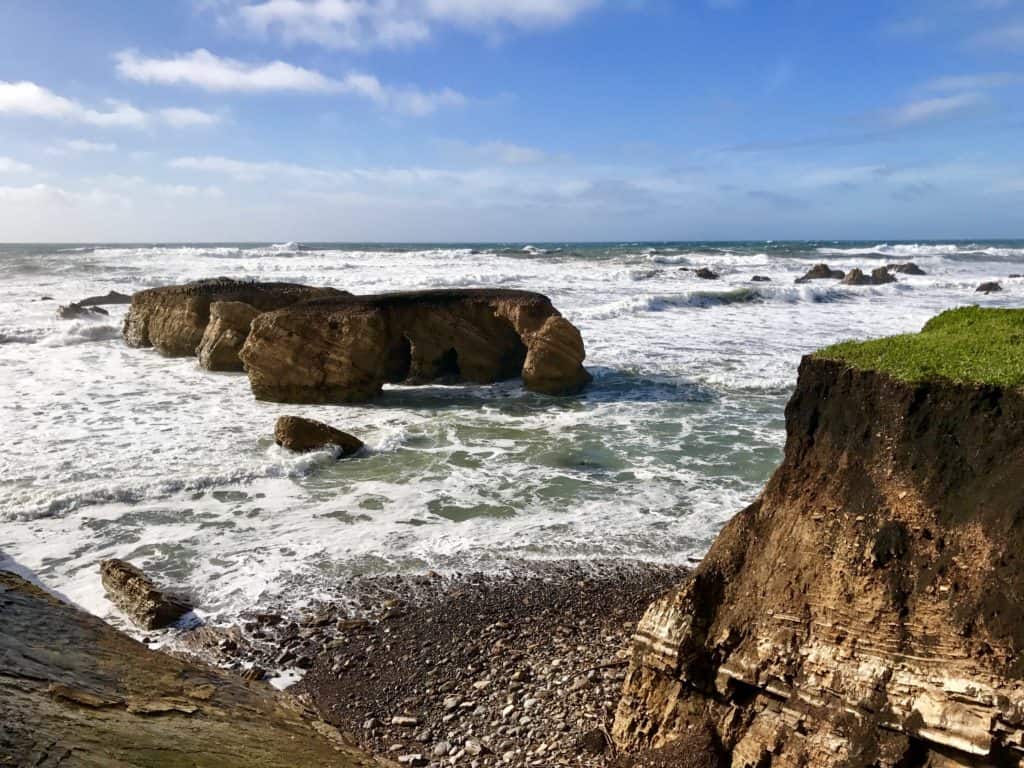 A lot of  the scenery in this area reminds me of Ireland or Scotland.  Moody, green, craggy hills.  Rugged cliffs and white-capped waves crashing relentlessly against them.

What’s funny is I kept taking pictures that reminded me of Ireland or Scotland, and then had various friends and family members comment on exactly that later on without prompting. 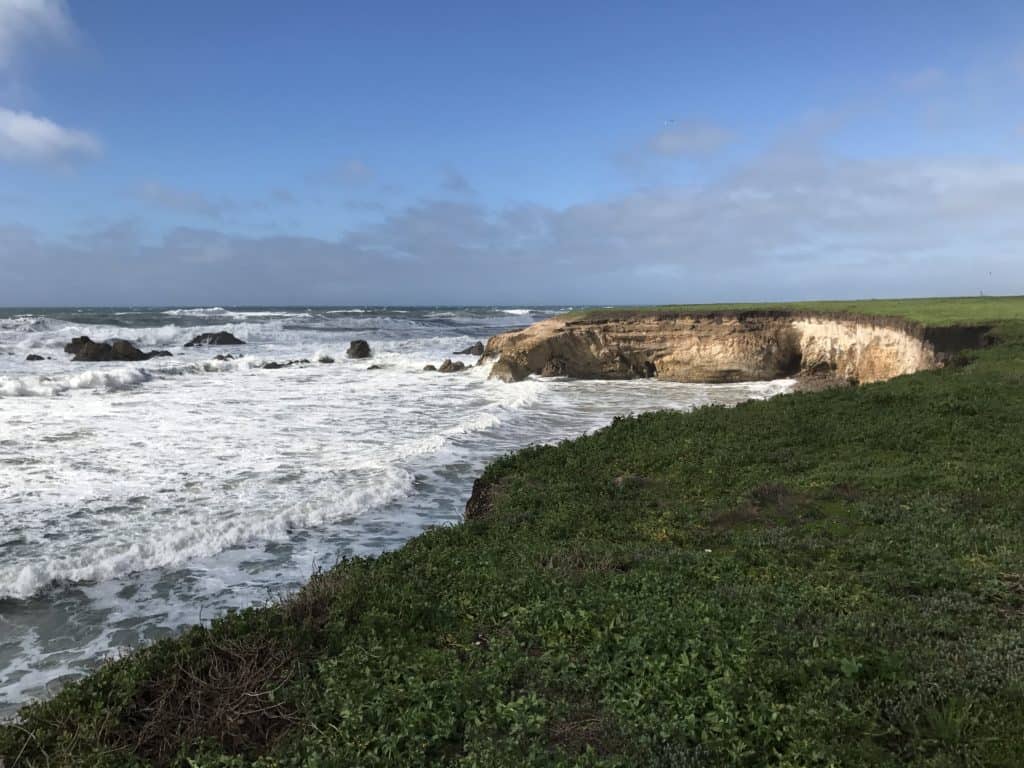 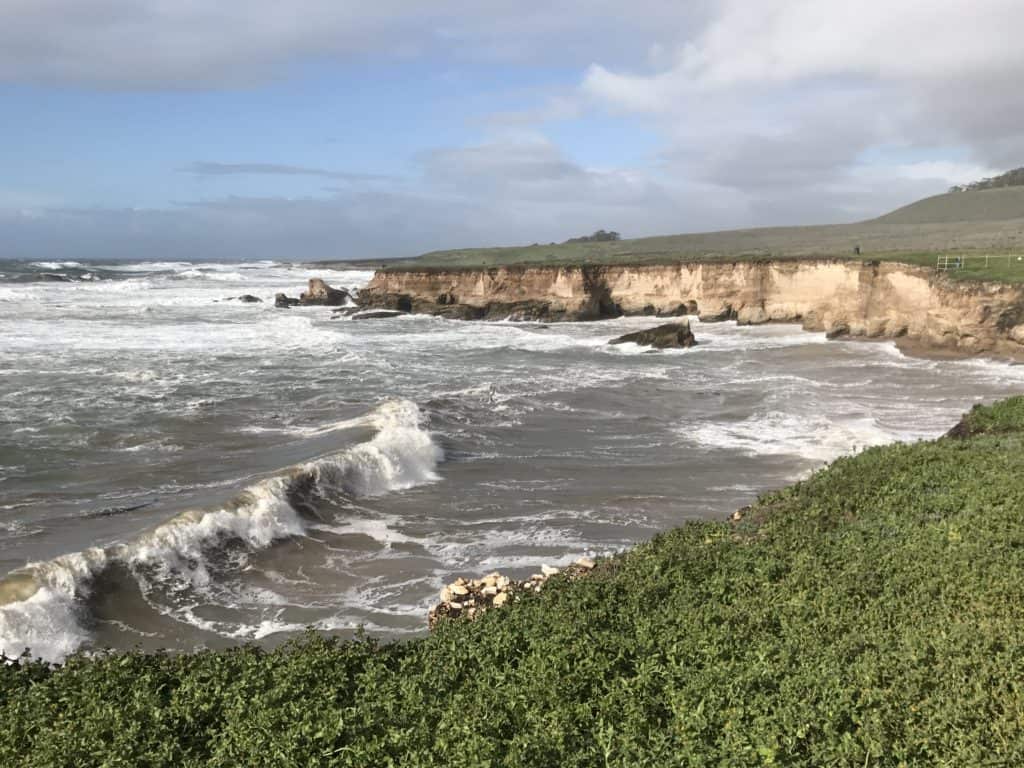 I wasn’t even quite to the halfway point when I realized that time had gotten away from me.  I got started later than planned, and then kept stopping to take pictures and didn’t make it nearly as far as I’d hoped.  I turned back around and speed walked (or lightly jogged, in some cases) back to the trailhead. 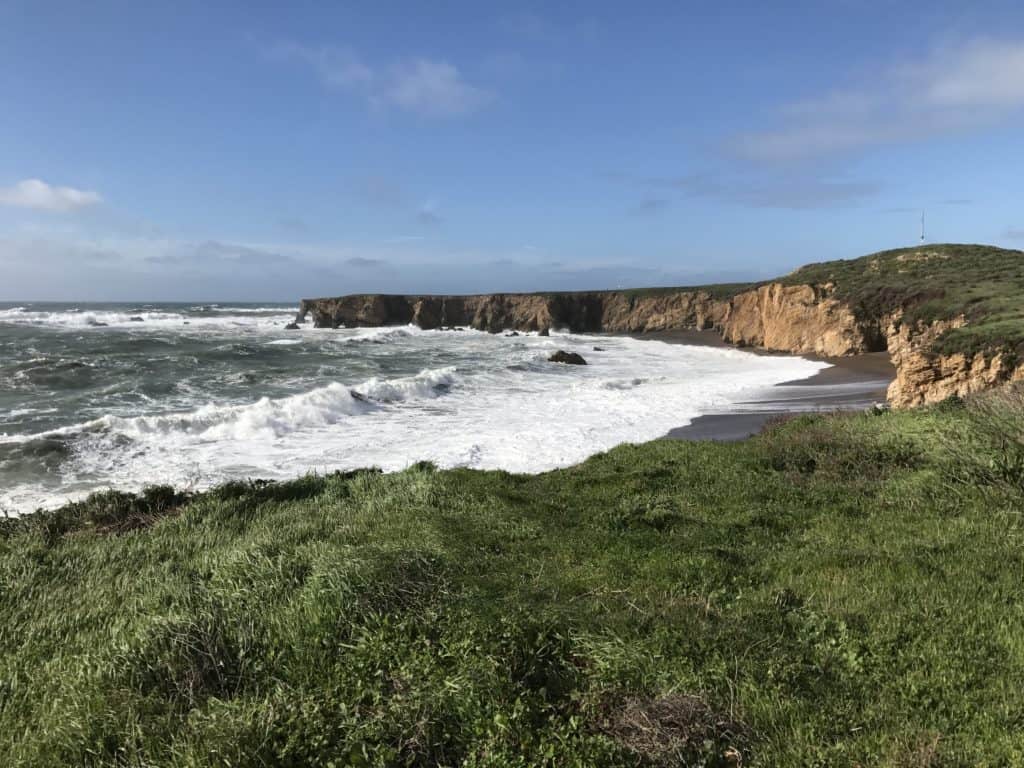 I’d highly recommend spending some time in Montaña de Oro State Park, and specifically the Point Buchon Trail, if you’re going to be in the area.  It would make a lovely weekend trip.  Arroyo Grande and San Luis Obispo both are adorable, with cute little bakeries and interesting local restaurants.  There are tons of great wineries in the area.  And then you’ve got all manner of hiking to burn off the calories of all those pastries.

The wedding went off beautifully, even though we had to move it inside about 30 minutes beforehand due to an impending storm.  But the bride and groom was happy, everyone was pretty, and the food was awesome (kudos to her for having burgers, fries, and ice cream sandwiches—here’s to real food!).

So, want to hear the end of the story??  I ended up having to spend a half hour during the wedding reception Sunday on the phone with United because they’d bumped me off my return flight despite promising not to, and then was sitting in bed at 8:45 Monday morning working when they canceled my flight back to San Francisco with no way of getting me back to Atlanta that day.

After getting on the phone with customer service, I ended up having to be packed and out of my hotel in 5 minutes, renting yet another (expensive last-minute) car, driving half an hour the wrong way to switch cars, then gunning it down to LAX in more rain to make a 2pm flight home.

I literally walked onto the plane.  I hadn’t eaten all day and hadn’t gone to the bathroom since getting up at 6:30, because I was too scared to take a few minutes to stop.  A lady in the security line called me out (nicely) for doing the “have to pee” dance while waiting for my bags to come out of the scanner.  True story.  I got home at 1:30am and had to be up at 5:00 for client meetings the next day.  Oy.

Where to stay:  Hampton Inn Suites in Arroyo Grande

Do you have other favorite hikes in the Arroyo Grande and San Luis Obispo area?  Let me know in the comments! 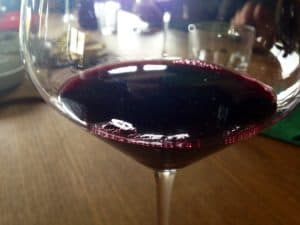 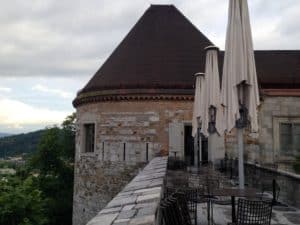 Dinner in a Medieval Archer's Tower At Ljubljana Castle