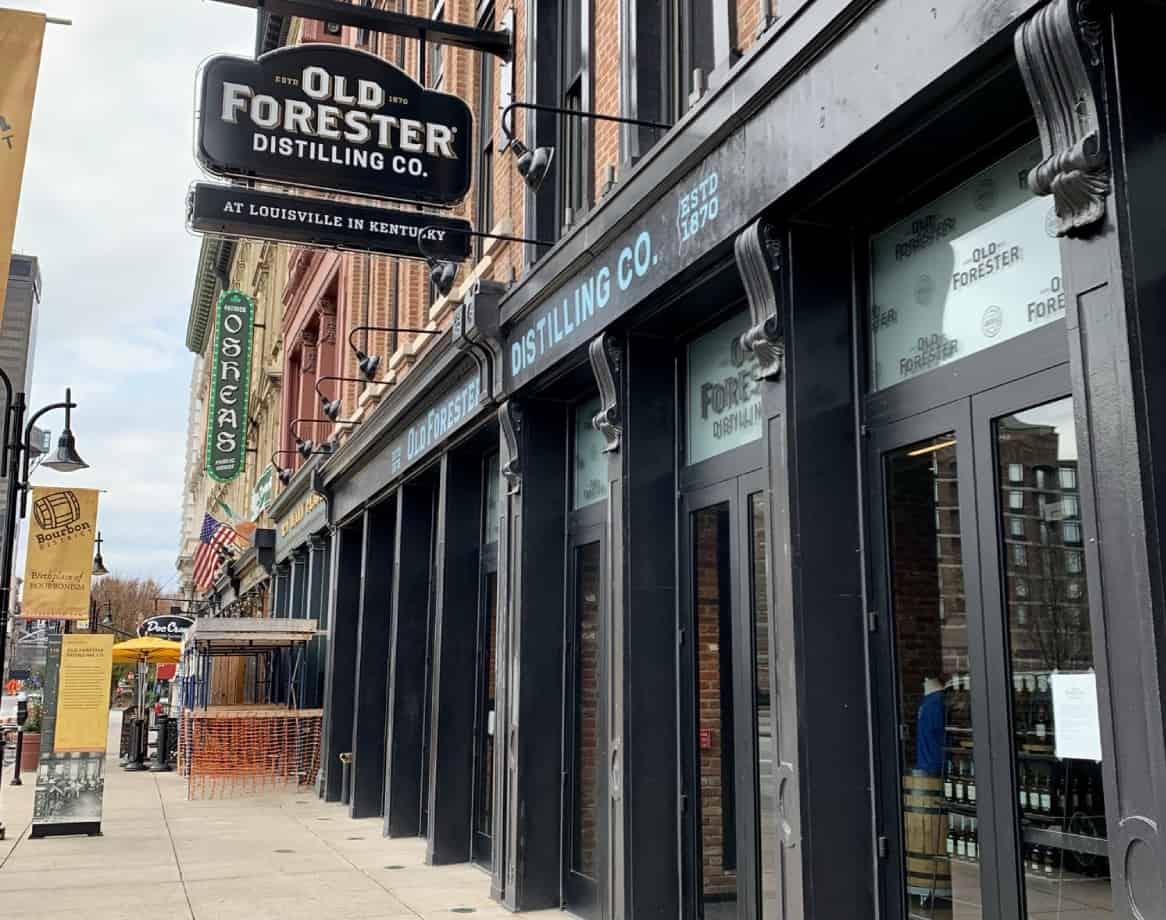 There’s something to be said for being the original.  In an industry saturated with legends and larger-than-life figures, it can be hard to stand out—but Old Forester Distillery manages.

There are so many amazing bourbon distilleries you can visit in Kentucky, and even just in Louisville proper.  But I feel like you’d be missing out if one of your first ones was NOT Old Forester Distillery.  It’s got the historic chops to back up its claims (in 1870, founder George Garvin Brown was the first to bottle bourbon), a beautiful historic and also state-of-the-art location in downtown Louisville, and a fun and informative tour experience for bourbon novice and obsessive alike. 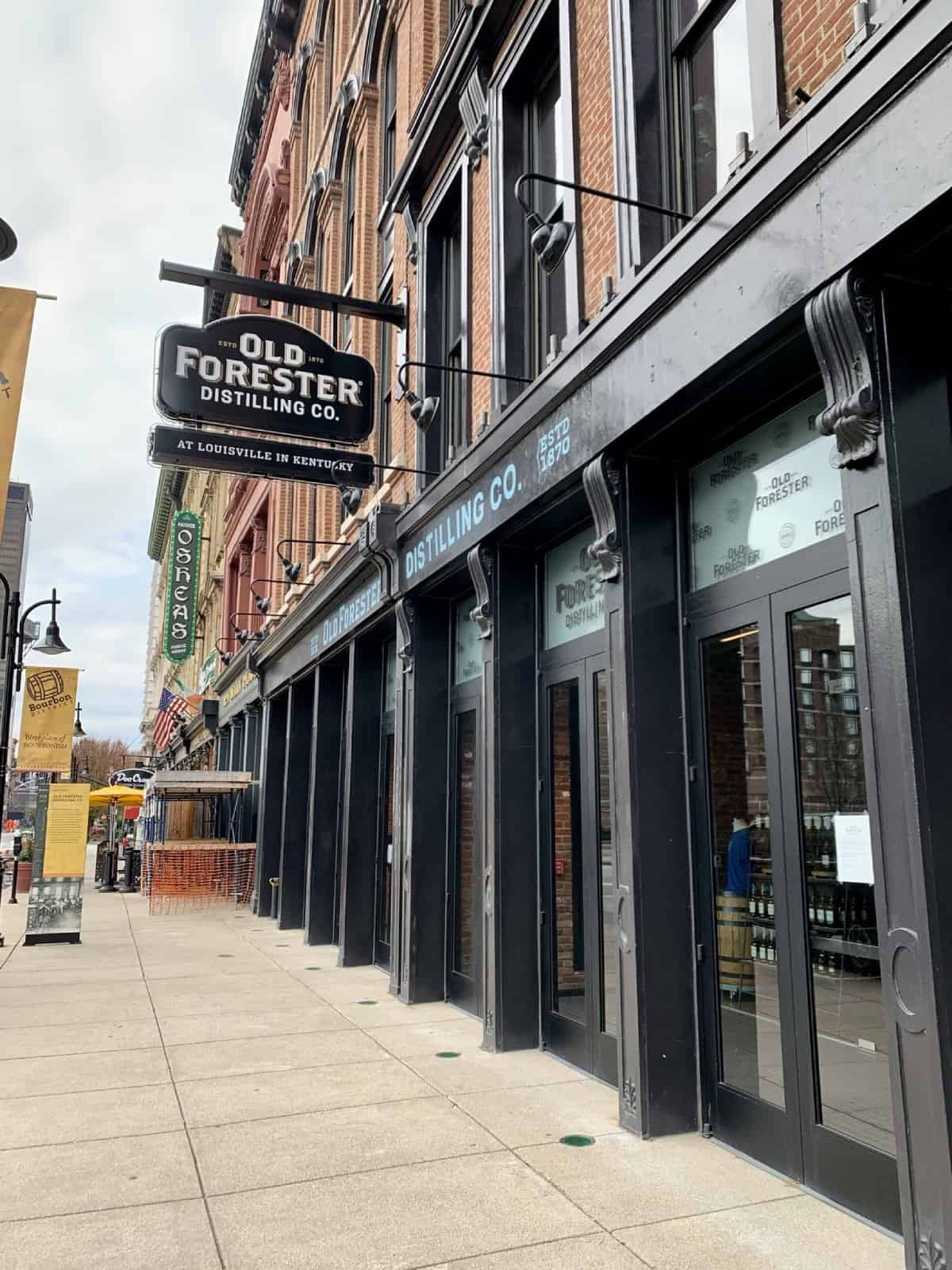 Disclaimer:  Experiences, times, and such will vary during COVID.  Check their website for details.

Full disclosure, I work for Brown-Forman, who owns Old Forester.  However, they have no relationship or endorsement with this blog, and I’ve toured on my own dime a time or two.  All opinions are, as always, completely my own.

Old Forester Distillery is located on Louisville’s historic Whiskey Row, which used to be the commercial hub for the bourbon industry through the 1800s up until Prohibition.  These buildings back right up to the Ohio River, allowing for each loading and transport back in the 19th century steamboat heyday.

If you haven’t given downtown Louisville a wander, I highly recommend it…it’s small and easily walkable, and has a number of beautiful old Revivalist and Chicago School-style buildings and cast iron facades from the late 1800s.  Whiskey Row has been listed on the National Register of Historic Places since 2010, and it narrowly escaped being demolished around that time.

Here’s the entrance to Old Forester…if you’re really lucky and catch the right day and time, you might get to experience the Whisky Drummer, where a snazzy big bass drum out front accompanies the rolling of barrels to the trucks (paying homage to a historic practice). 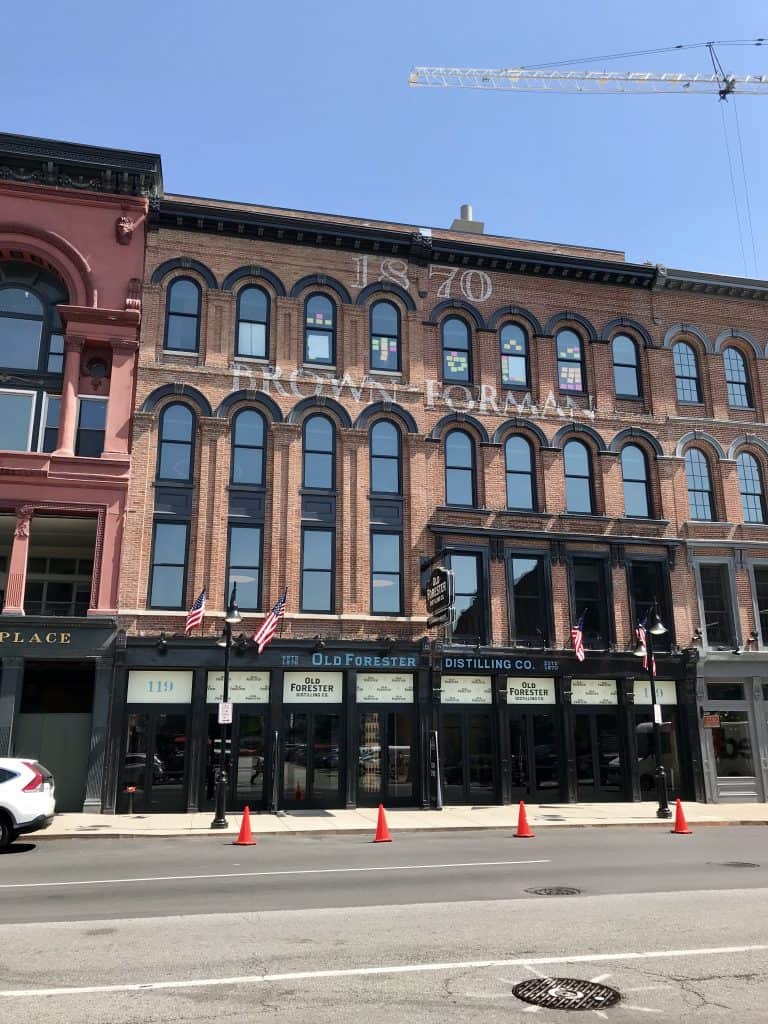 What to expect at Old Forester Distillery

Once you get checked in, you can sit and wait for your tour or take a peek into the retail store.  There you’ll get a full look at “Big Penny”, the beautiful shiny 44-foot copper column still that juts up through the entire building. 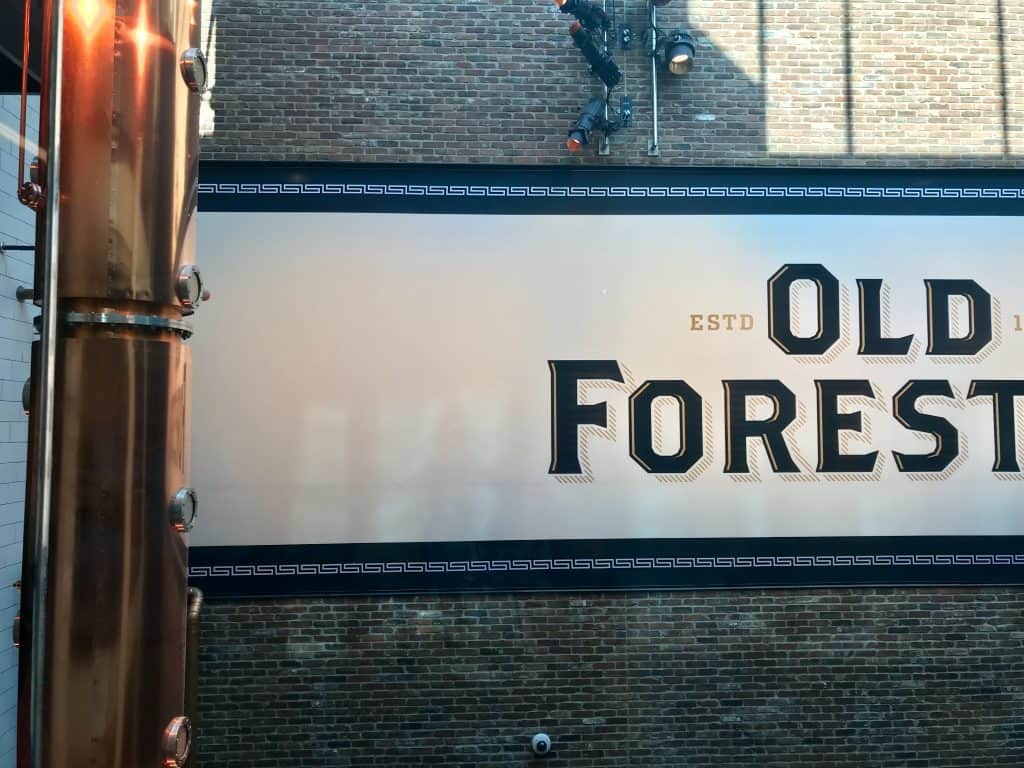 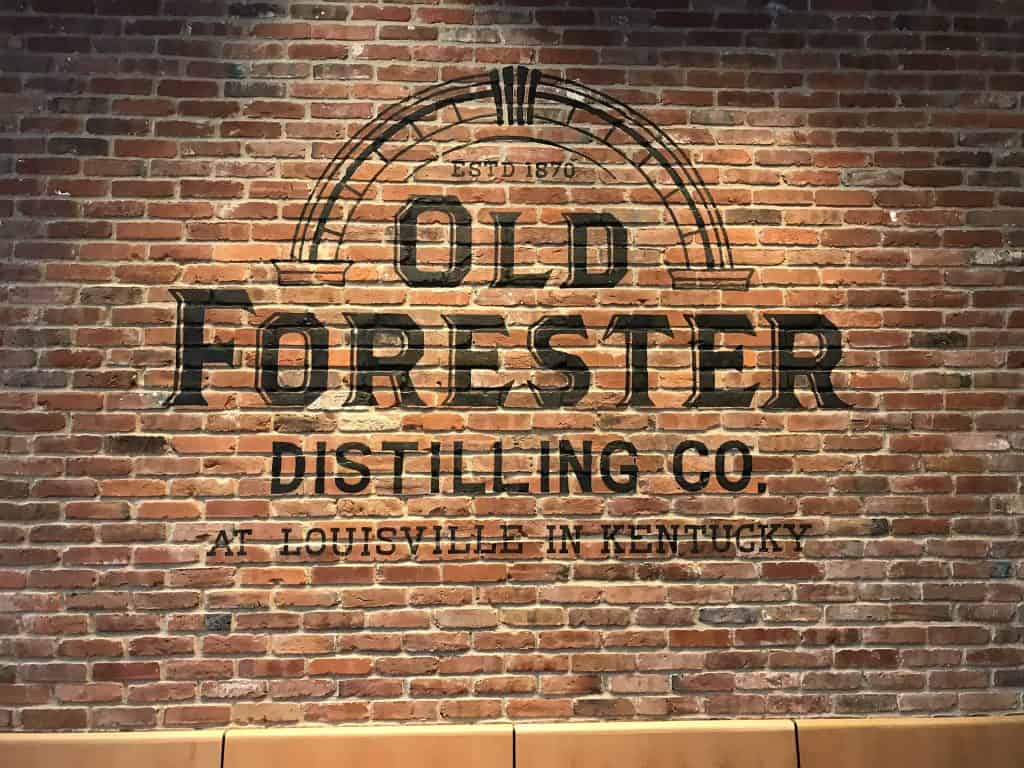 The regular tours typically last an hour, including 45 minutes of history, learning about their whisky-making process, and including a walk through their working cooperage.  Then there’s a 15-minute tasting of three Old Forester expressions (the expressions on offer vary week-to-week).

You can just walk in and get your ticket, usually tours are offered every hour on the hour, but COVID has obviously changed that.  You definitely want to check and book ahead, especially during peak days and seasons (for example weekend, Derby and summer/fall in general). 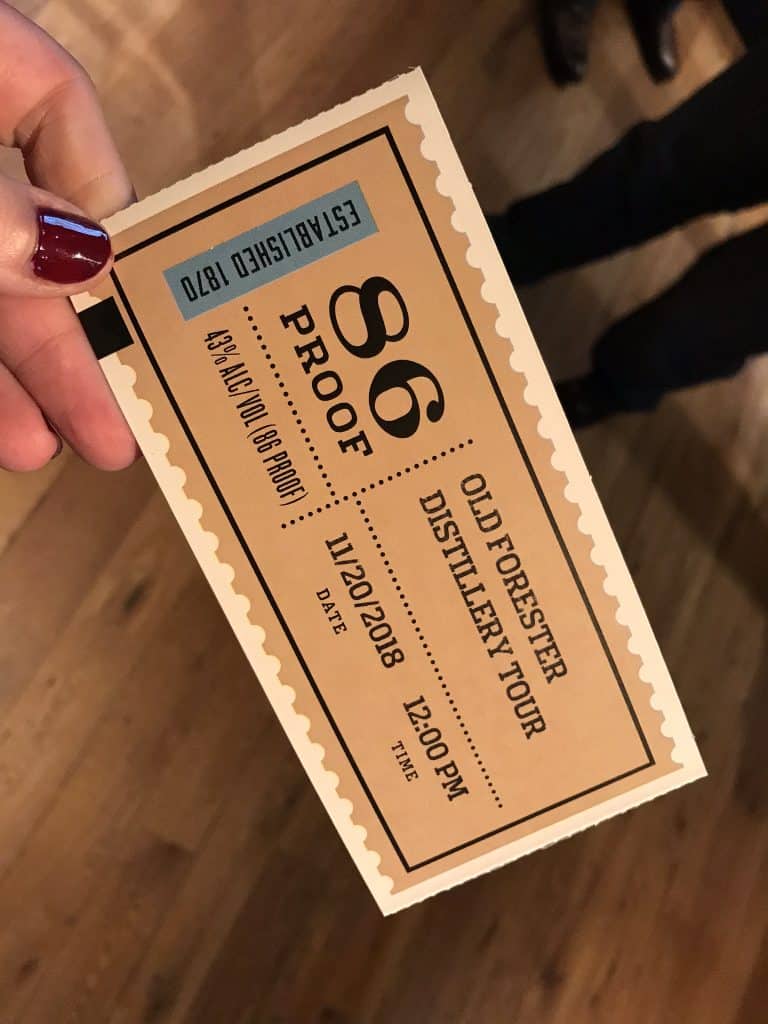 The distillery opened in 2018, at the site of the company’s previous Whiskey Row offices (117 Main).  It’s designed to showcase the entire whiskey-making process, from fermentation to barrel making, filling, aging, bottling, and everything in between (though the initial “mashing” takes place off-site).

They *do* actually make and age some of the brand’s bourbon here, but the majority is done at their larger distillery in south Louisville, as downtown doesn’t have enough space. 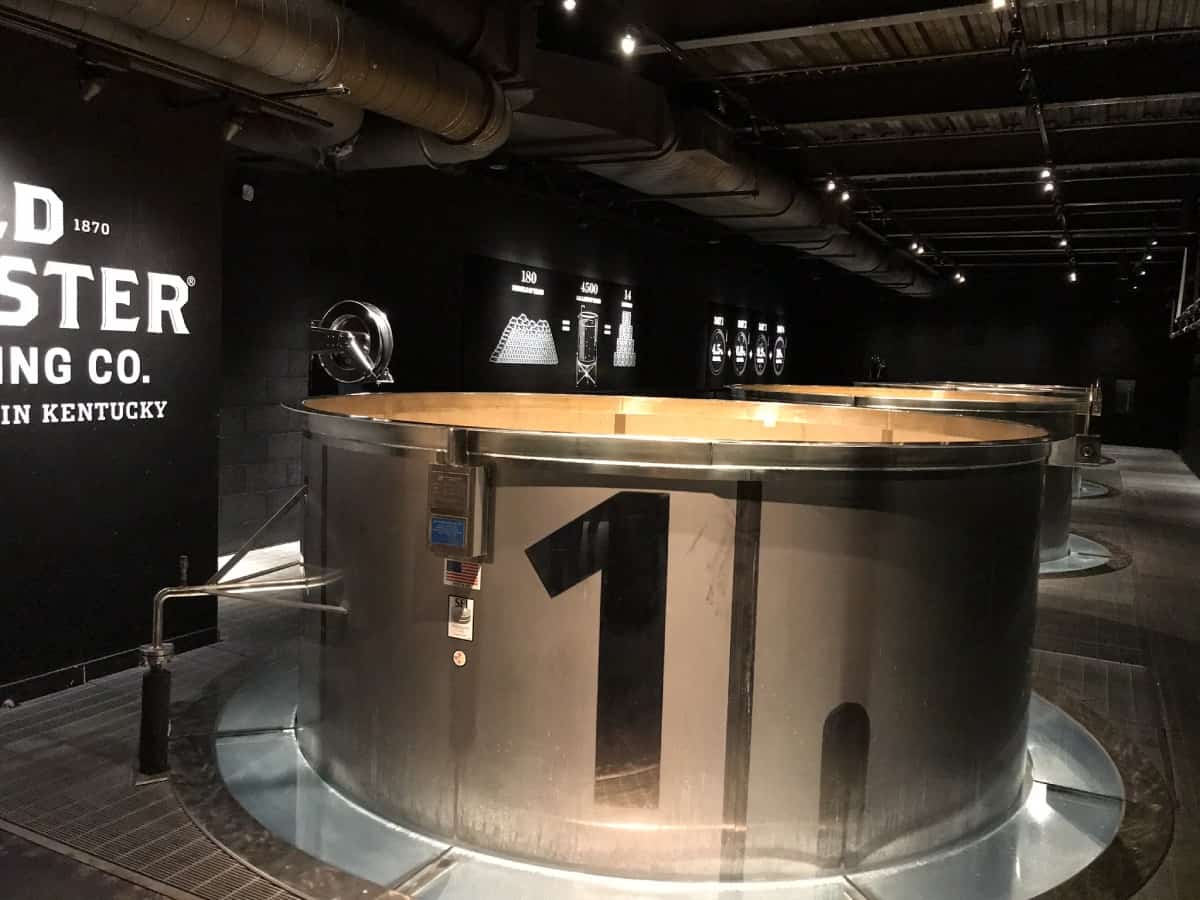 One of the things that makes Old Forester (and its Brown-Forman U.S. whiskey siblings) completely unique in the bourbon world is that they make their own barrels, and they’ve built a small working cooperage in the distillery so that visitors can also see the amazing craft at work.  No other distillery tour has this. 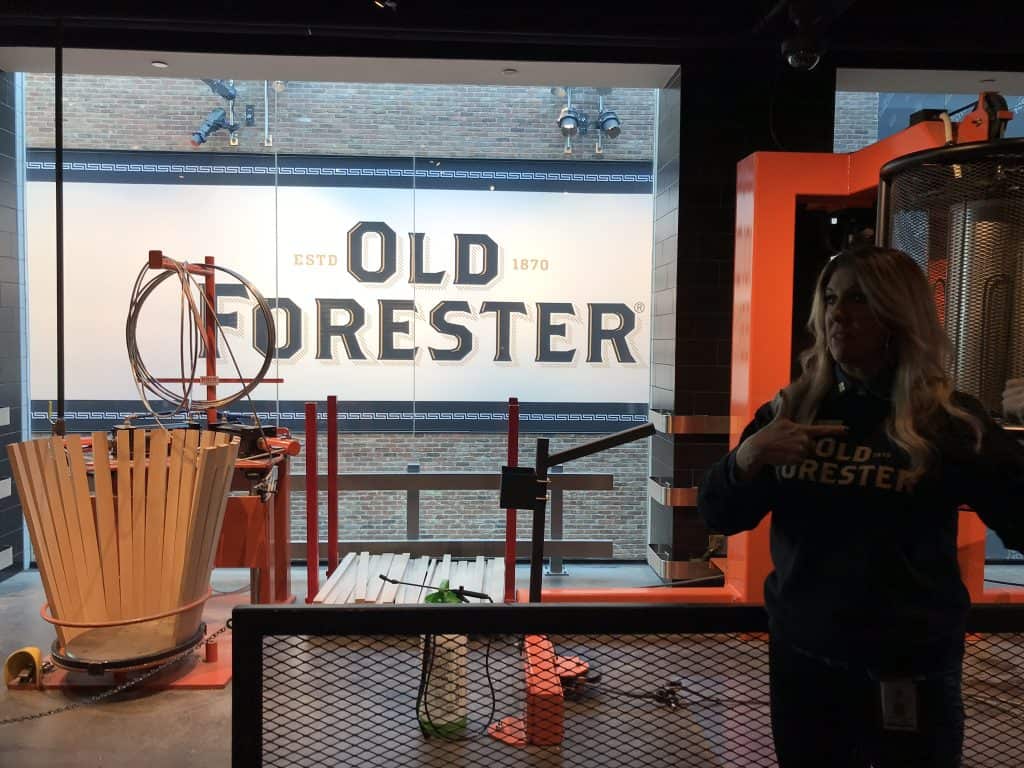 Most bourbon companies buy their barrels, but the company believes so strongly that 50% of the bourbon’s flavor (and 100% of the color) comes from the barrels, so they want to control the whole process…MORE ON THAT LATER.

The cooperage is only working on certain days (so check ahead of time), but you can watch coopers set the hoops, pull and arrange the staves, bring everything together, test them, char them, and more.  You might even get to press the “fire” button to char the barrels yourself! 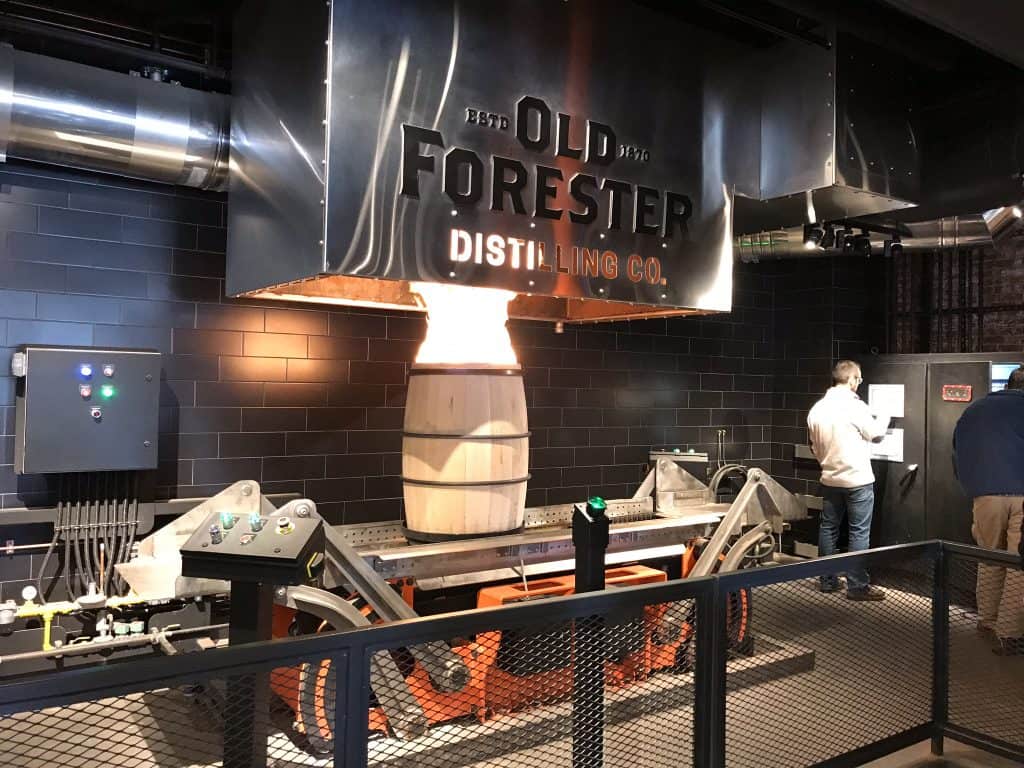 From the cooperage, you’ll head toward the barrel rackhouse and hear about the aging process.  Man, I love a good barrel warehouse!

In addition to the process, the tour also focuses a lot of the company’s history.  Old Forester is the only bourbon to be continuously made and sold by the same company before, during, and after Prohibition.

The enterprising Brown family was able to secure one of only a few (6, to be exact) permits to manufacture and sell whiskey during the 1920s (for “medical” purposes)…talk about forward-thinking!  You can see more of their cool historical notes here. 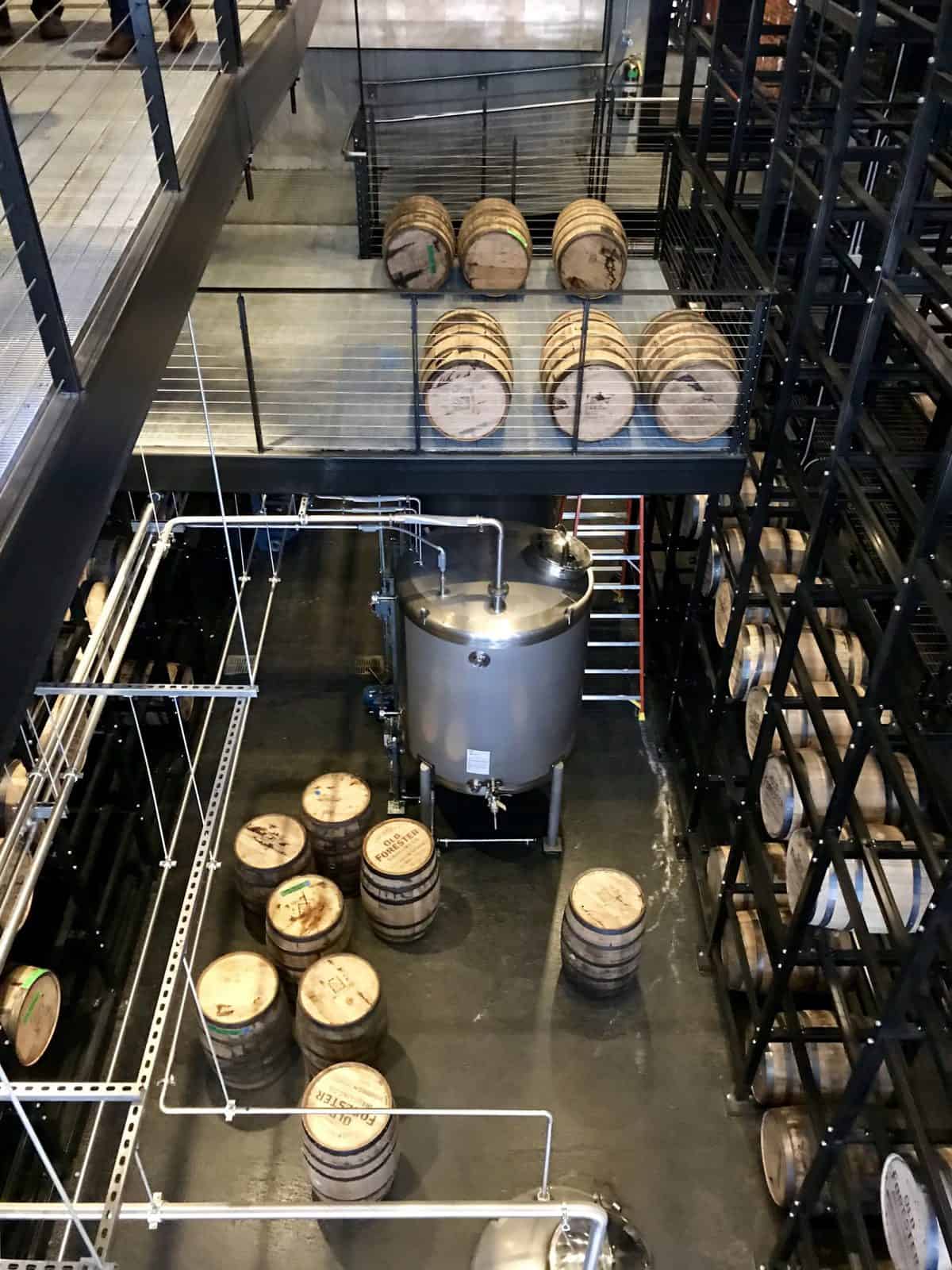 Why does it matter that Old Forester was the first to blend batches of bourbon and then bottle it?  Well, at the time you’d just go, like, to the drugstore, and draw yourself some whiskey out of the barrels.

But quality varied dramatically, there were no standards (you could just lie), plus there were a LOT of shenanigans going on at the time, like adding all sorts of things to the whiskey (often to increase amounts and thereby profits).  Some were gross but maybe harmless (prune juice, tobacco juice), some maybe less so (sulfuric acid, sawdust).   People rolled the dice each time they drank or took some as medicine, and plenty got sick or died.

So George Garvin Brown began buying whiskey from reputable distilleries, blending batches for consistency, bottling and sealing them, and signing his own name to prove he stood by them…though branding them with a Dr. Forrester’s name.  Now we take it for granted that whiskey comes in bottles, but GGB was the O.G. 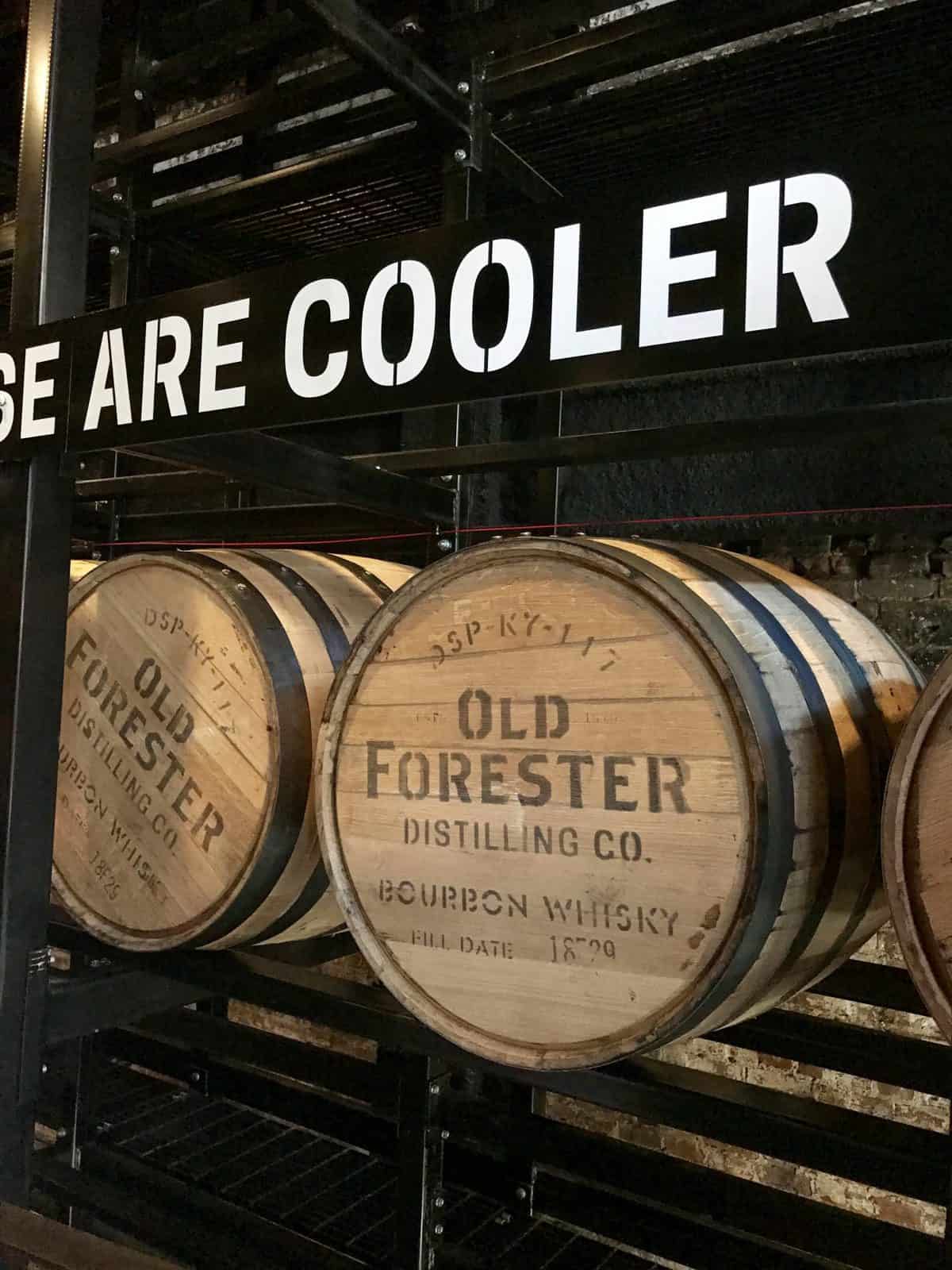 At the end of the tour you can taste three different expressions of Old Forester, with explanations of each and how they differ, tasting notes, and more.  I heard a rumor that they also added a modjeska to the tasting as well, a local candy treat consisting of marshmallow dipped in caramel (with bourbon, natch).  I’ve never had one but people rave about them. 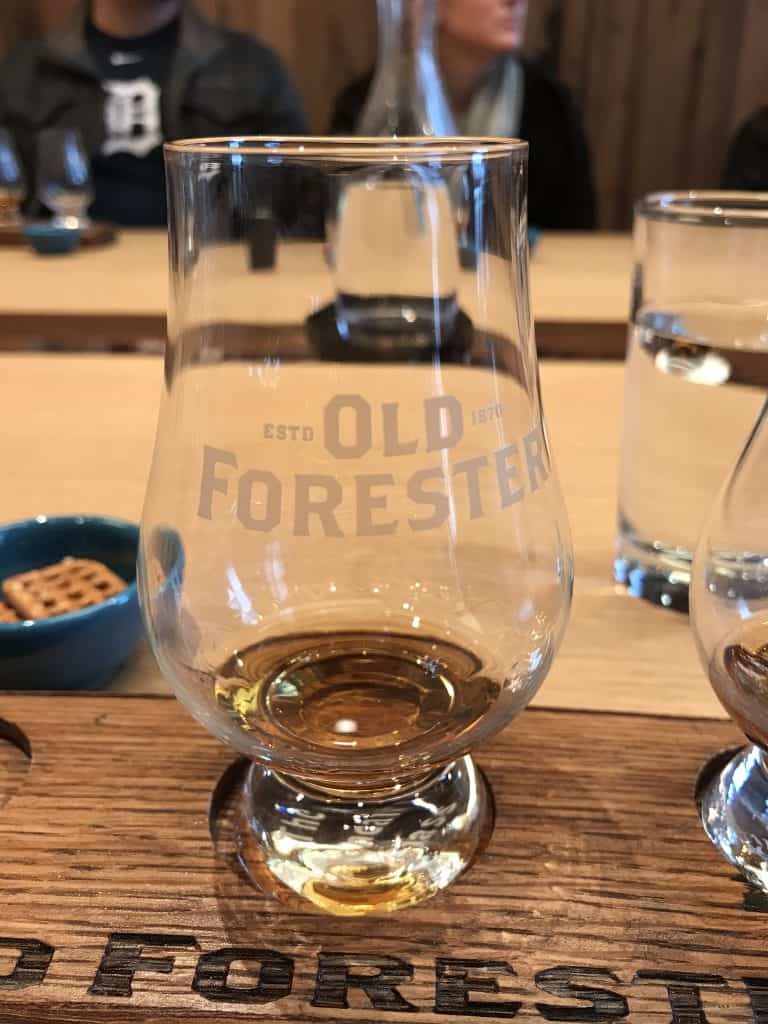 Want a lovely cocktail to finish your tour…or don’t have time for a tour and still want the Old Forester experience??  Wander into George’s Bar, named after founder George Garvin Brown (fondly called GGB by those working on the brand).  Their cocktails are super cool—this is where I had my first ever clarified milk punch—and even the mocktails are interesting and delicious. 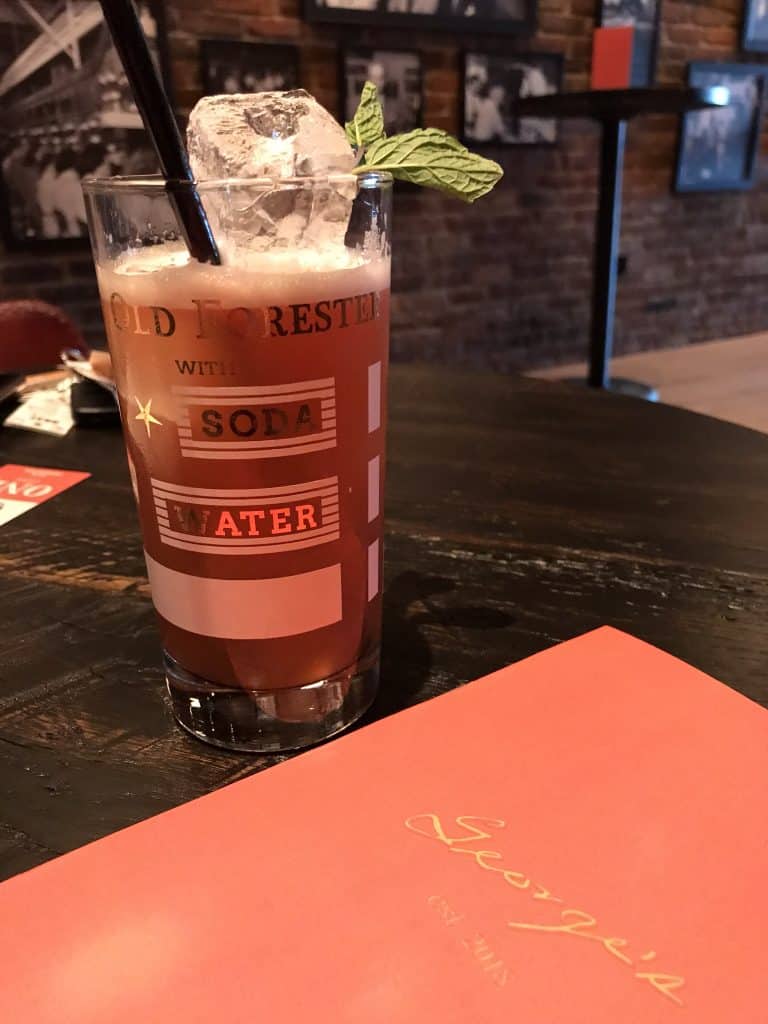 I’m not sure when or if it’s open to the public, but the rooftop patio is beautiful and has great views, and can be rented for events.  I’m a sucker for a rooftop with a view.  The distillery has events sometimes, like cocktail classes, or even yoga (which I assume is on the rooftop??).  Once COVID gets better I assume they’ll start up again. 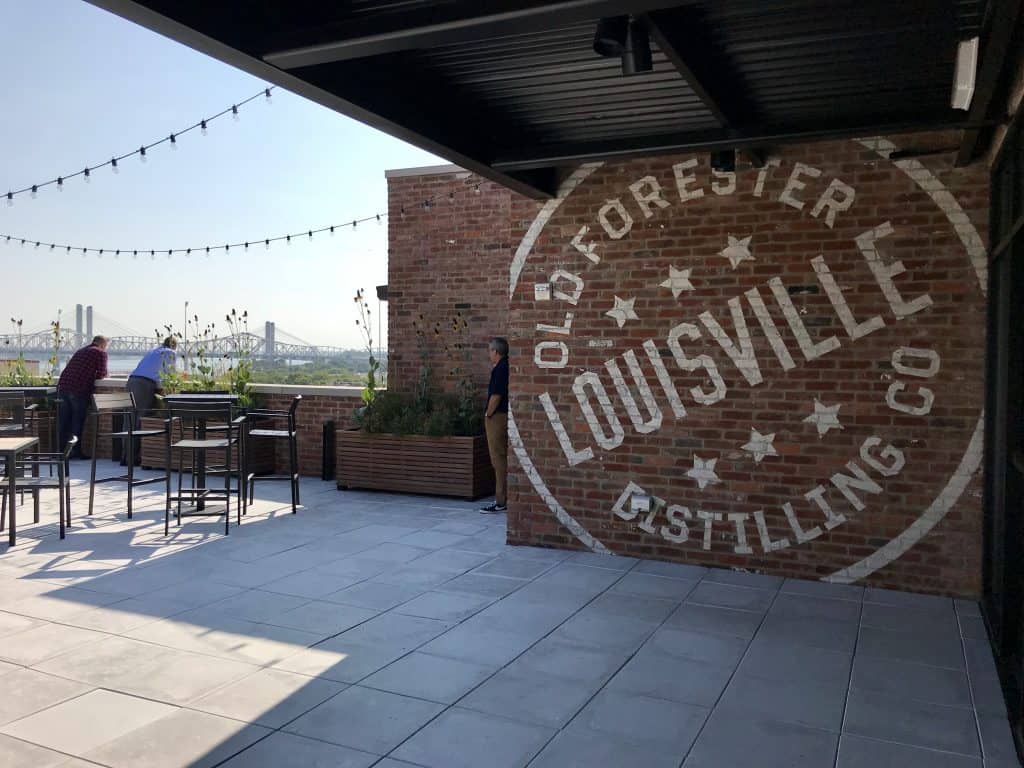 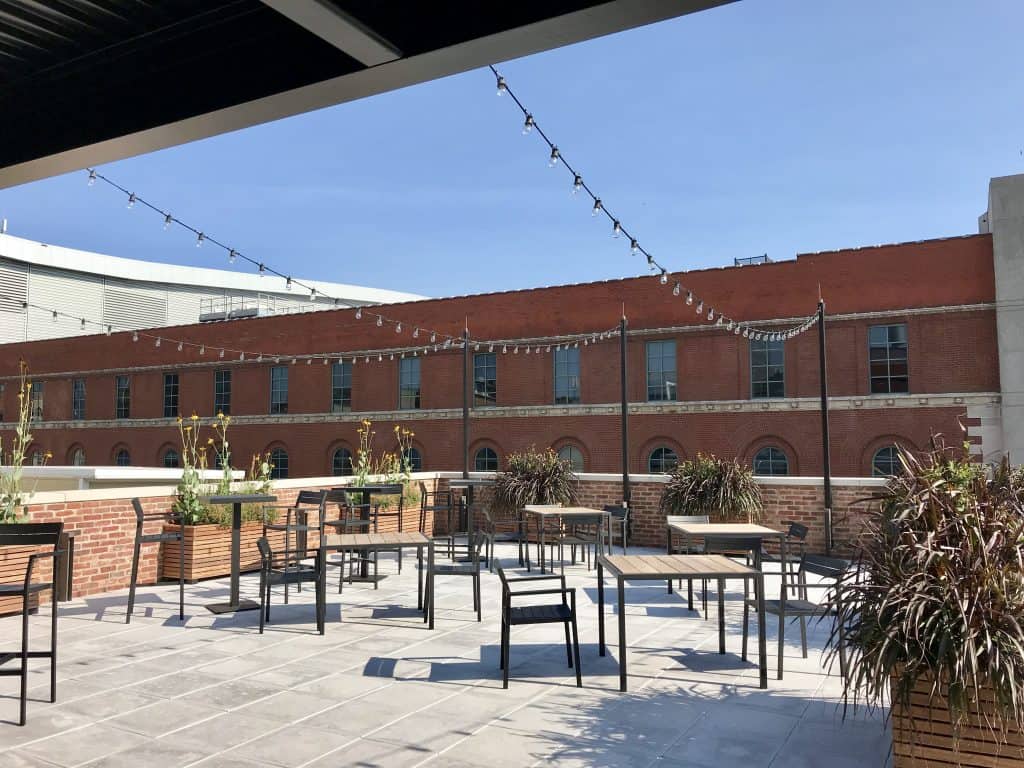 If you are feeling peckish after your tour, there are a number of great restaurants in easy walking distance in downtown Louisville.  Just next door and across the street you have Doc Crow’s or Merle’s Whiskey Kitchen, or you can head up a ways and see the eclectic art and have delicious food and cocktails at Proof (in the 21C Hotel). 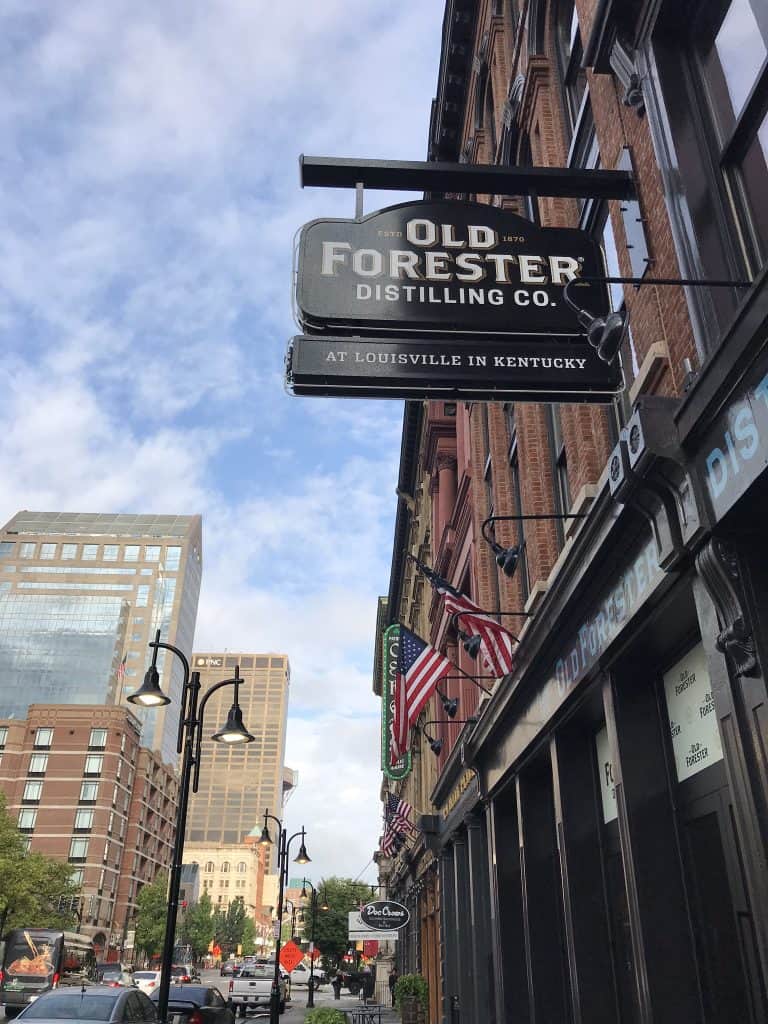 But okay, I know I teased some extra barrel goodness at the beginning.  Want to take it a step further??

This is something that not as many people have visited, though it can be toured by the public in small groups via Mint Julep Tours and other more private group tours.  This is a large working cooperage, where the magic is made!

Watching the coopers go about their work is really amazing.  You can see how confidently and quickly they grab staves to get perfect watertight fit, how they steam and bow the shape in the hoops, and then how finished barrels are tested to make sure they’re perfect, then toasted and charred.

There’s sadly no whiskey at the end, but it really is a unique angle on the process if you’re a whiskey nerd or just like to see how things work. 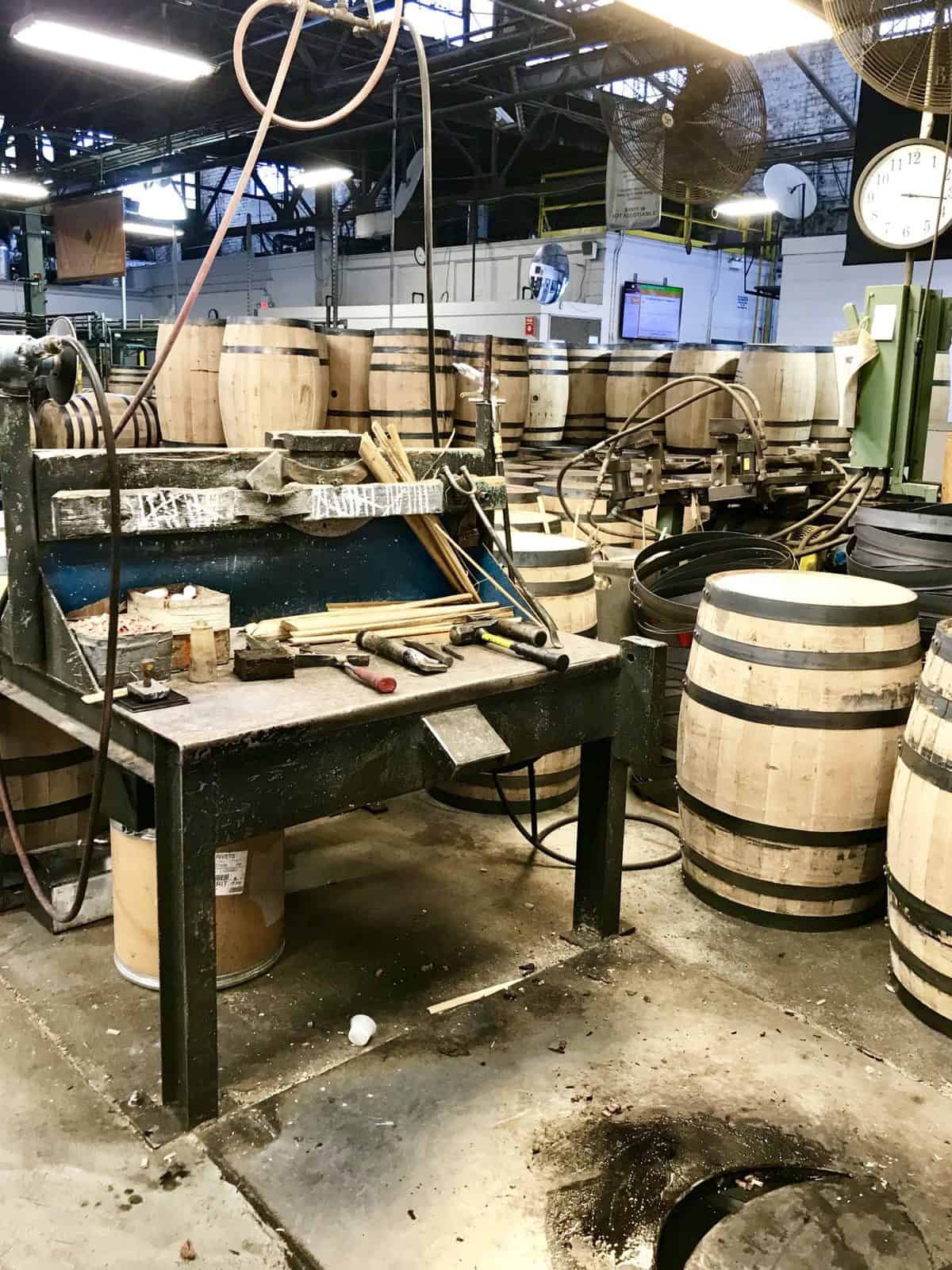 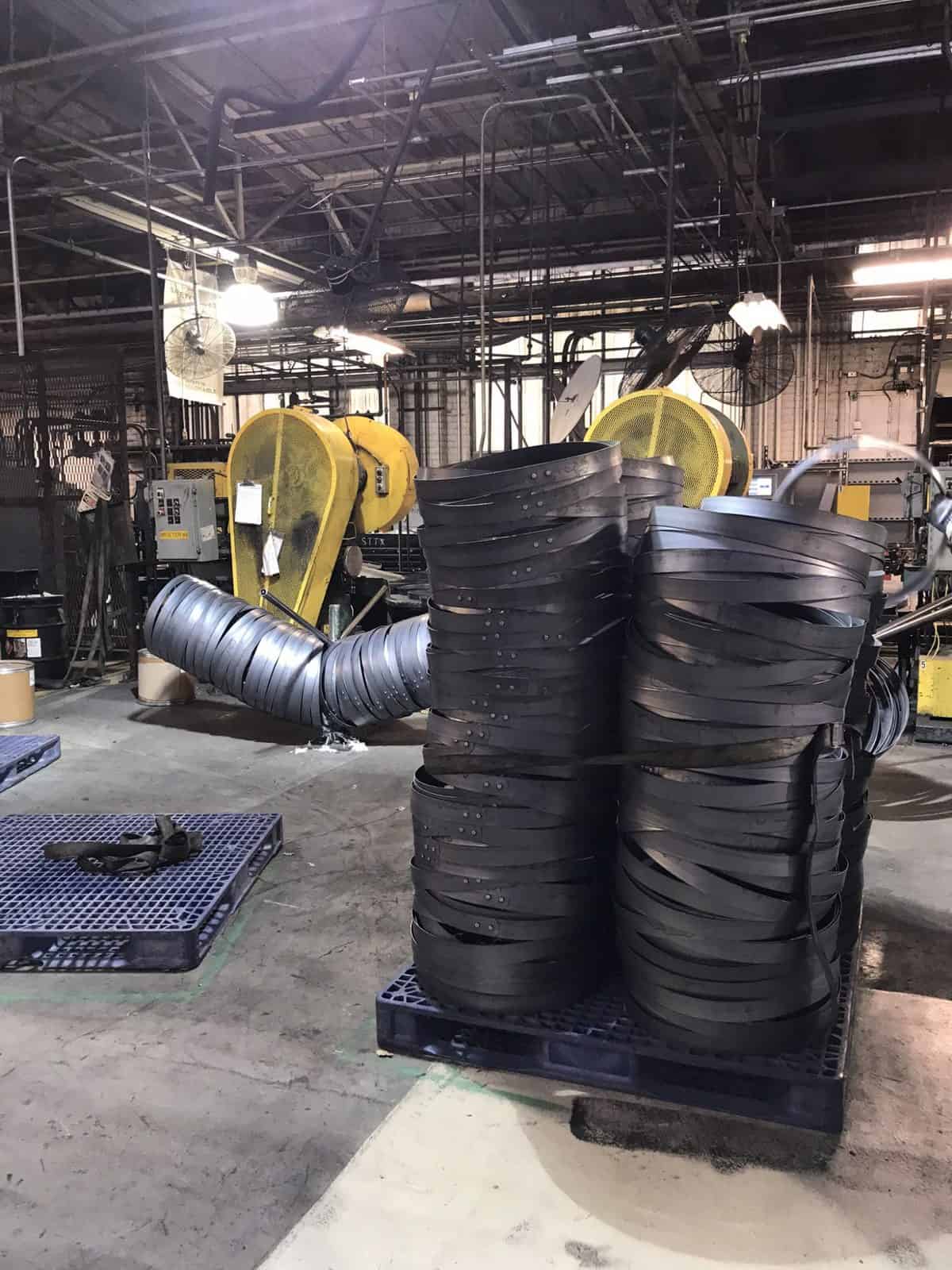 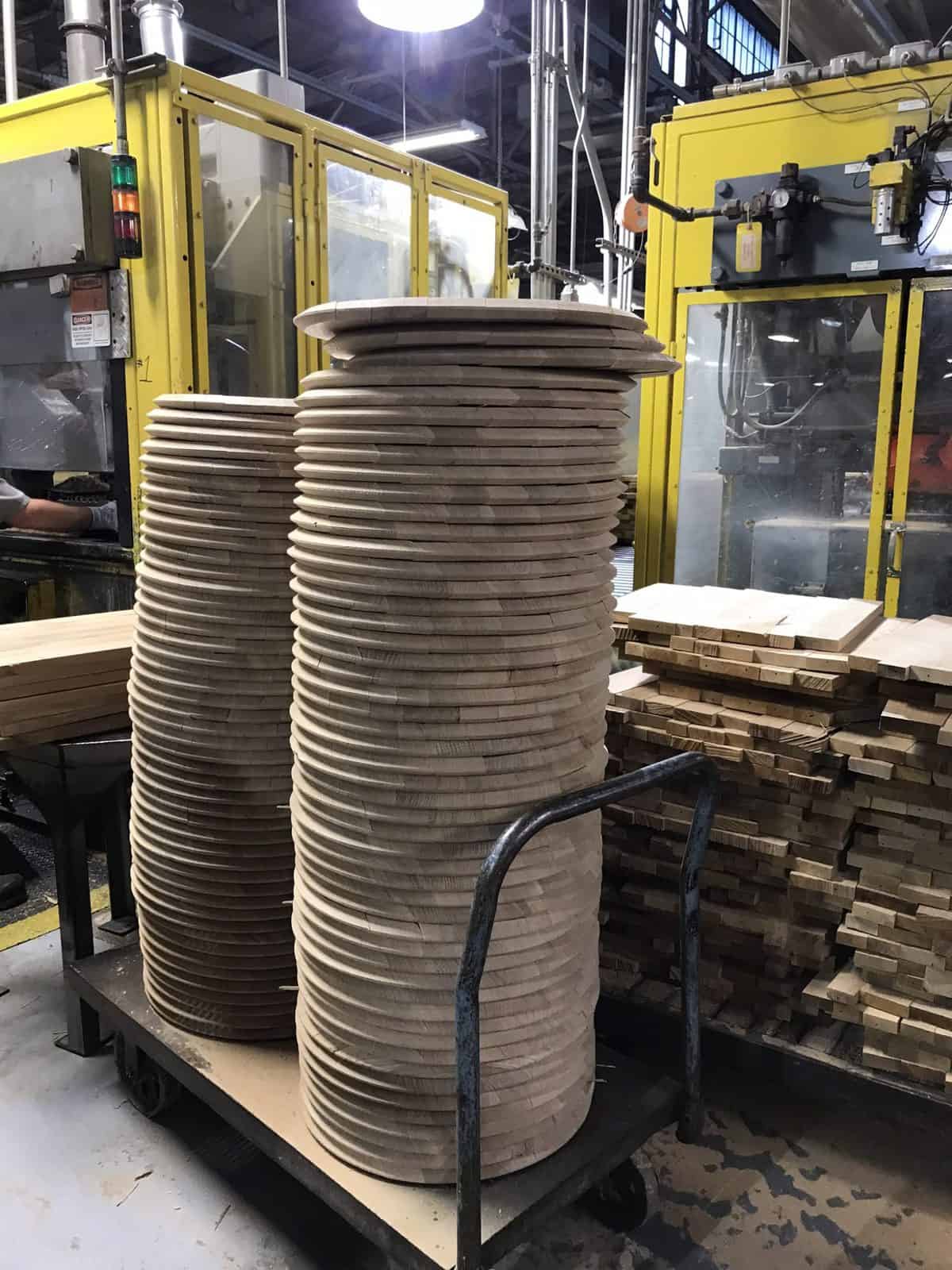 So, have I convinced you to plan a trip to bourbon country ASAPronto??  I’m still trying to get to more local Louisville distilleries (everything’s shut down right now due to COVID plus it being the quietest time of year), but Old Forester should definitely be on your list! 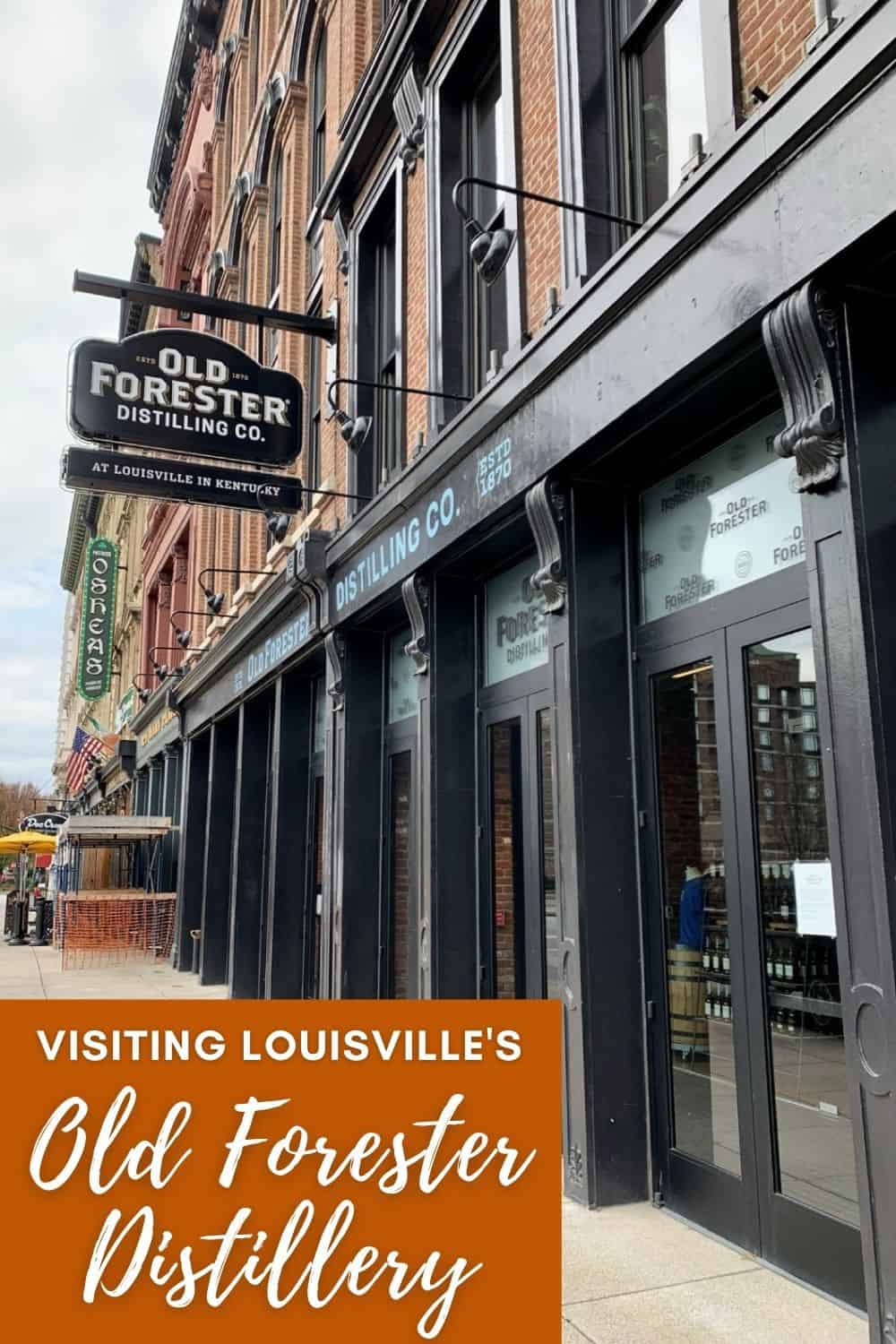 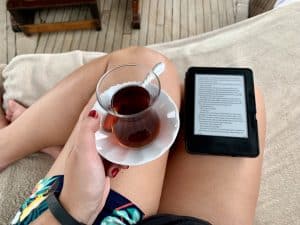 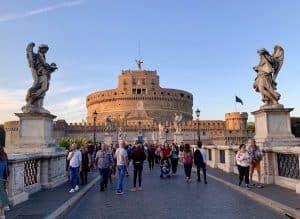 A First-Timer's Guide To Rome, Italy