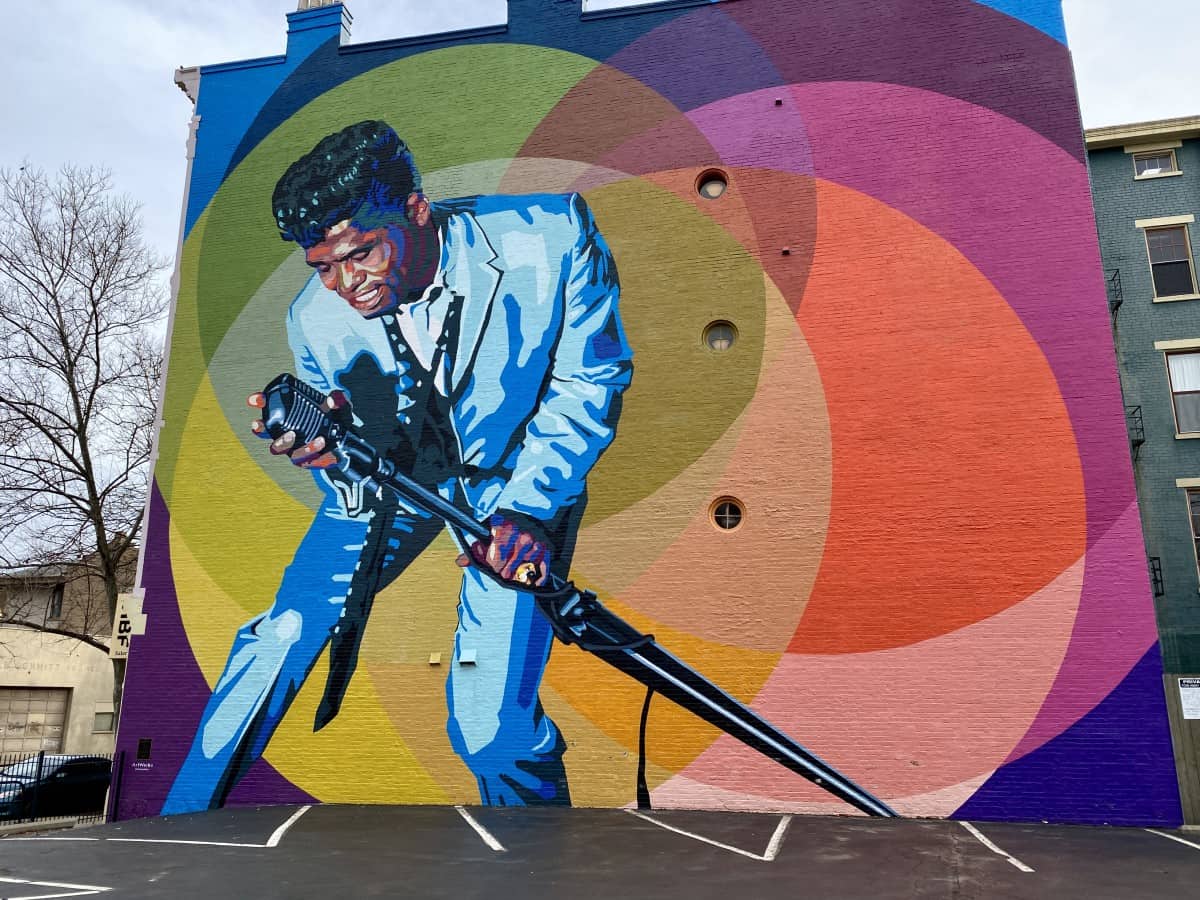 When people think of “cool” cities in the U.S., I don’t know that Cincinnati floats to the top of most people’s lists.

But on my recent weekend trip I found that it blends tons of cool and colorful historic buildings with similarly-colorful street art.  So I made it a mission to explore as many of the fun murals in Cincinnati that I could discover on my own.

I’ve done much deeper posts on what to do on a weekend trip to Cincinnati and have posted about Cincinnati’s awesome food and drink options, but wanted to spend a little time reveling in the city’s amazing street art scene.

Rewind to the early 2000s and Cincy had overtaken Compton in the list of most dangerous cities.  But inspired by what he saw on a visit to Philly and looking to help drive a renaissance in his city, then-Mayor Mark Mallory challenged Cincinnati’s art community (and organization ArtWorks) to create murals in all 52 of Cincinnati’s neighborhoods.

Today there are over 150 murals throughout the city and they bring such a fun and eclectic feeling to just a simple walk down the street.

Once an area to be avoided at all costs, Cincinnati’s Over-the-Rhine neighborhood is now one of the city’s vibrant beating hearts and one of the best places to see murals in Cincinnati.

I have to start by mentioning one of my favorites, the insanely vivid “Mr. Dynamite” James Brown mural above.  It’s on the walk from Findlay Market to Vine Street (1437 Main Street).  This one near Findlay reminded me some of a vampire-like one I saw in Reykjavik. 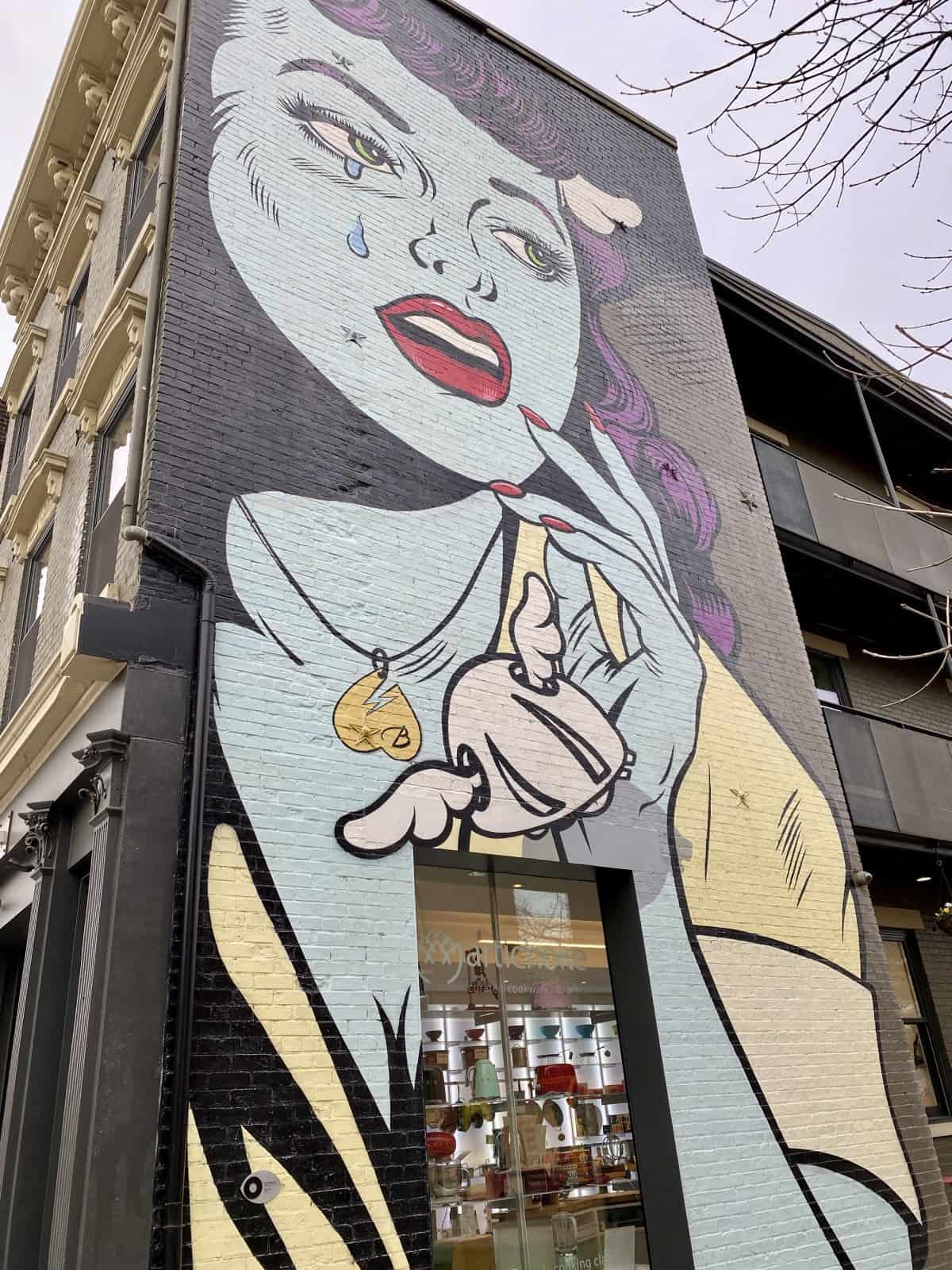 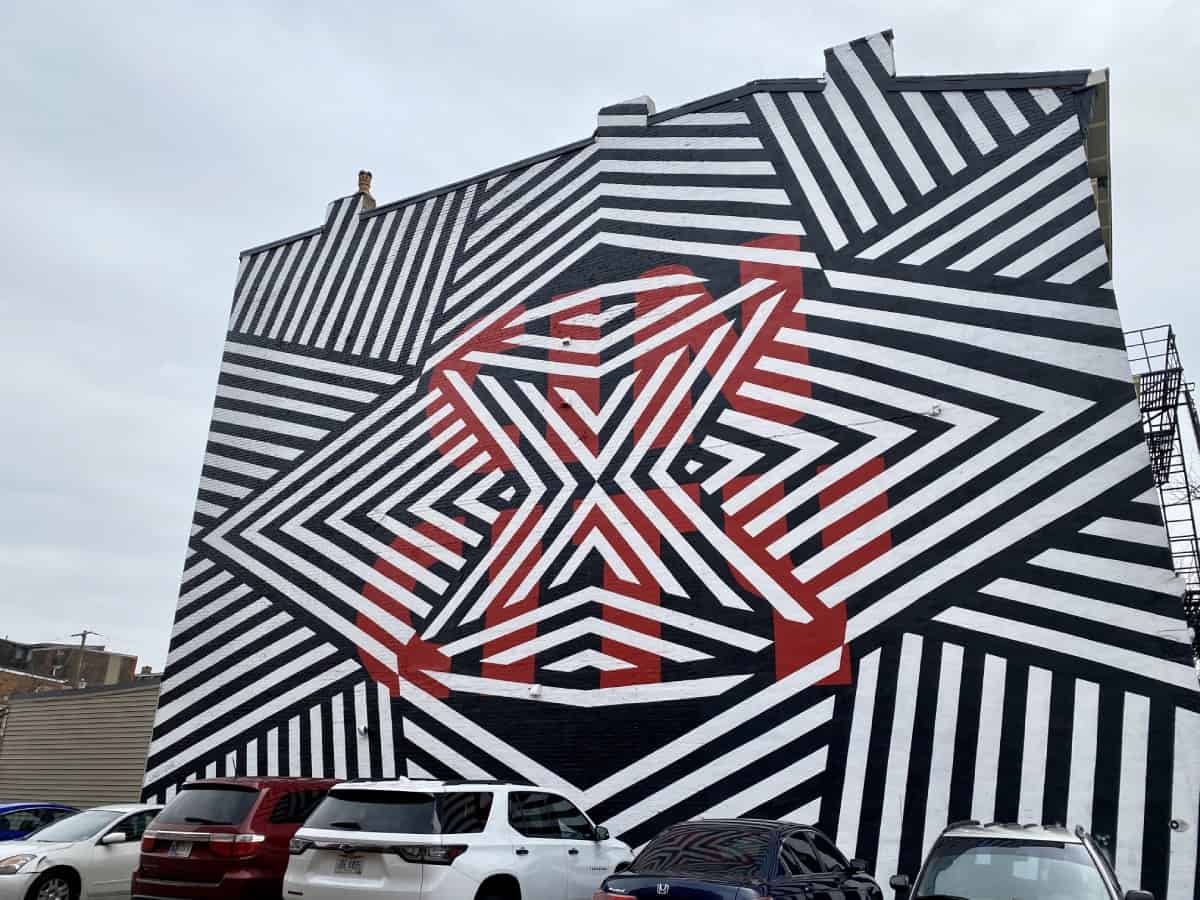 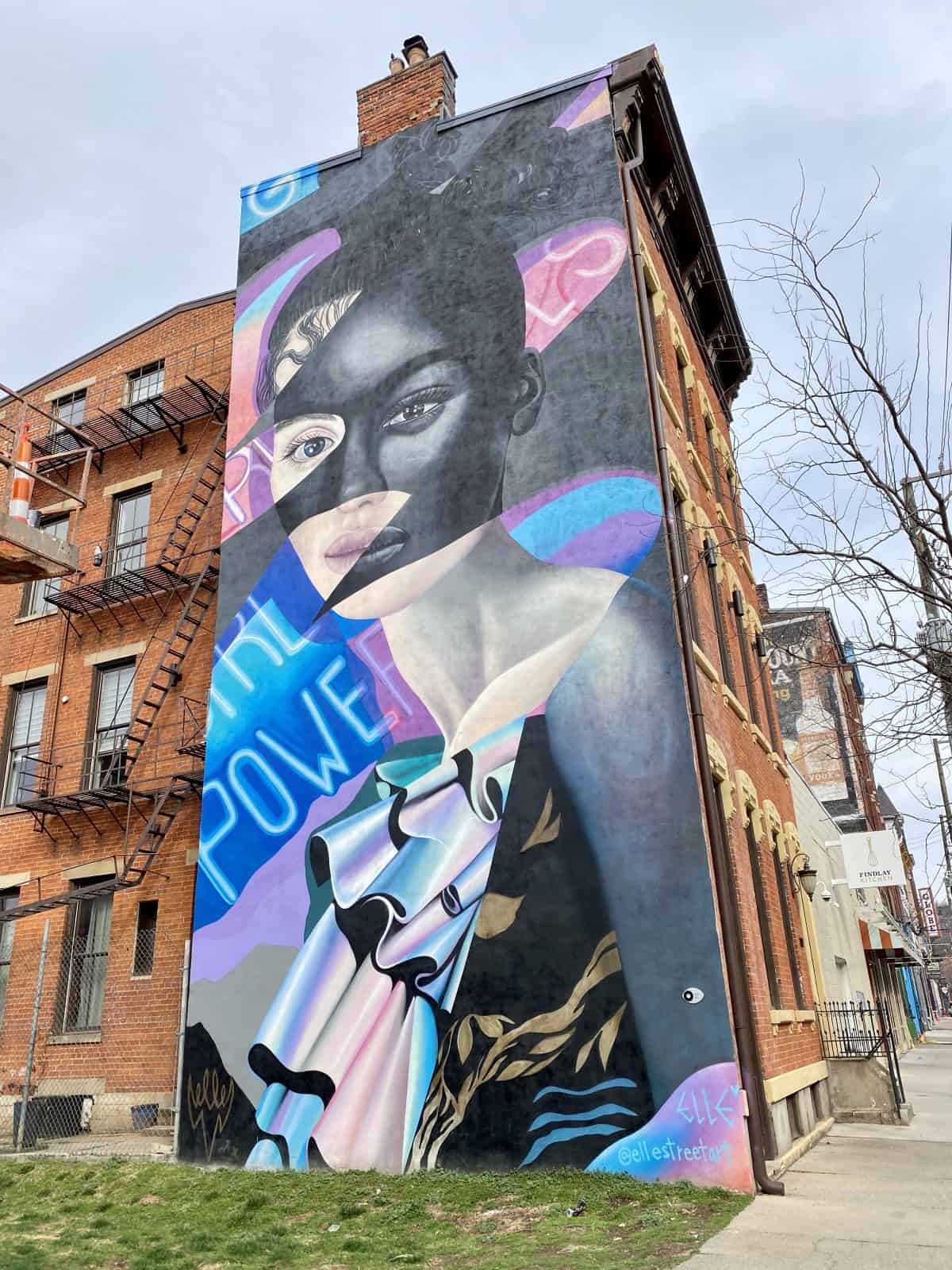 Walking from Findlay Market area along Liberty toward Vine Street you’ll see a ton of different murals (including the James Brown one).  I loved this Ezzard Charles one, just so BOLD. 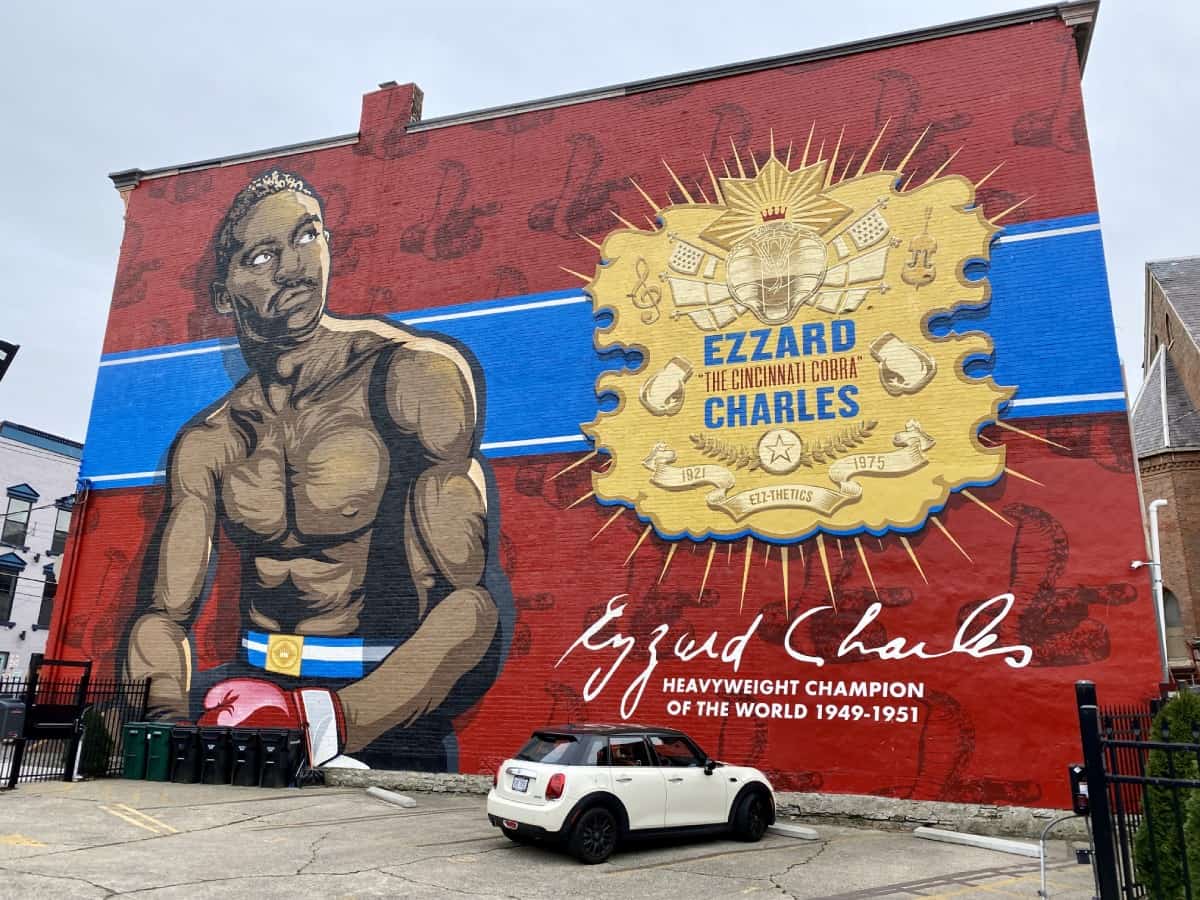 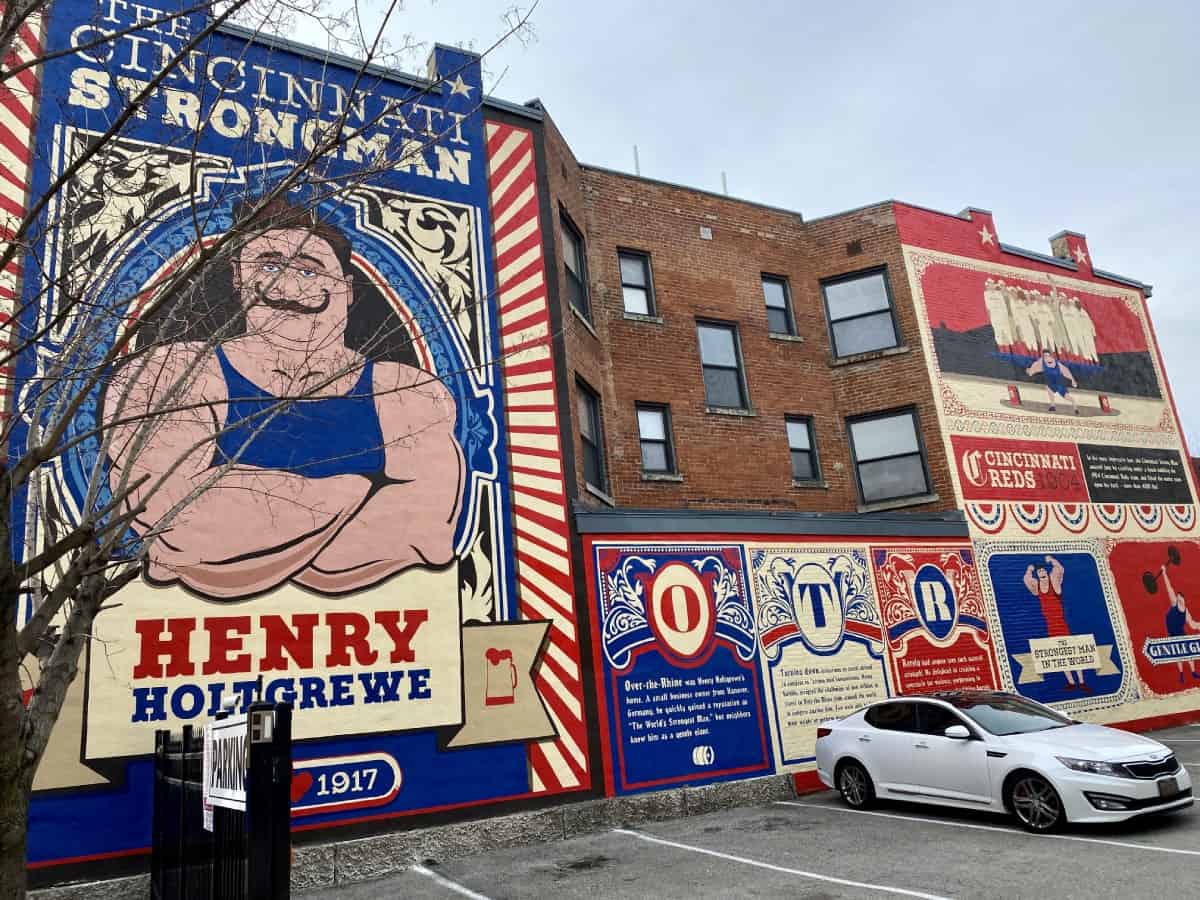 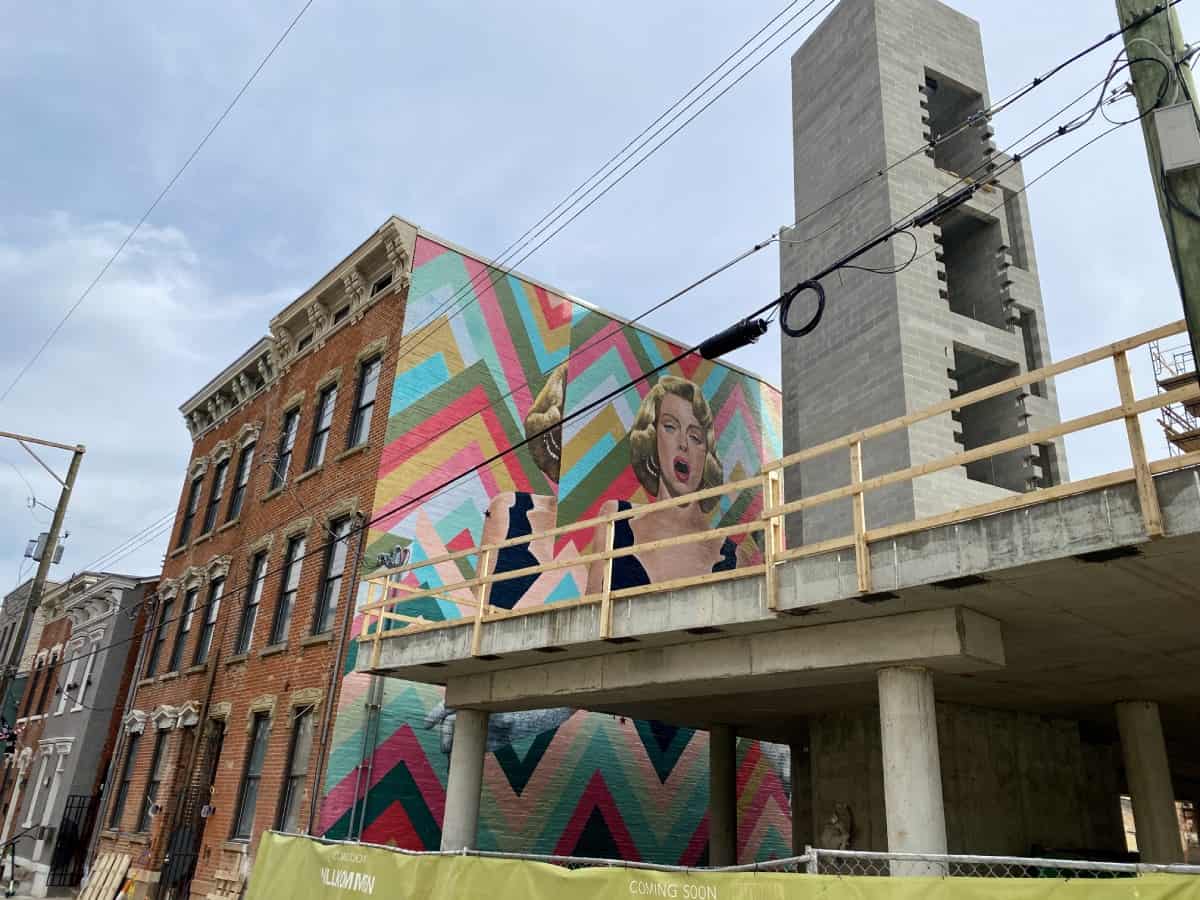 I thought this little silver flying pig was so cool, and I was bummed that I couldn’t really get a good up-close photo of it (just a weird angle). 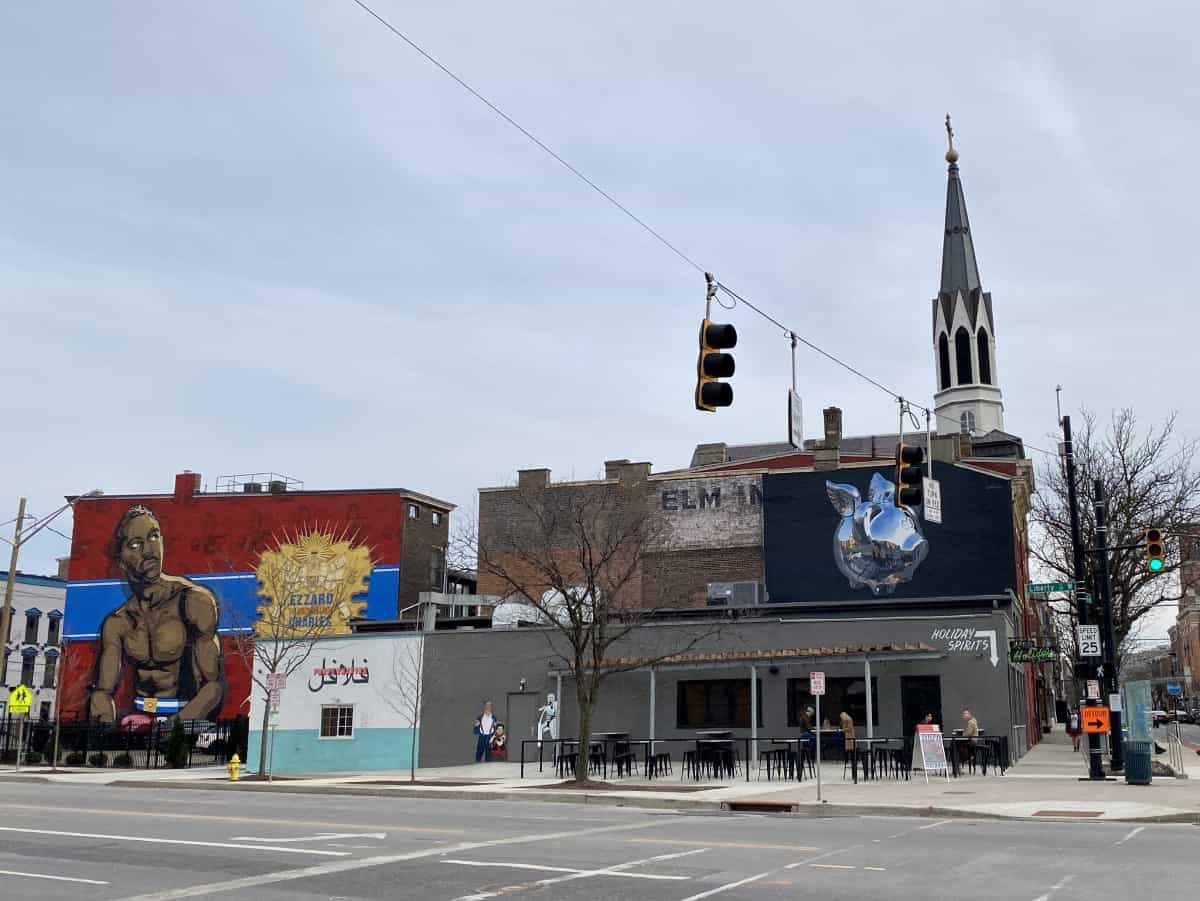 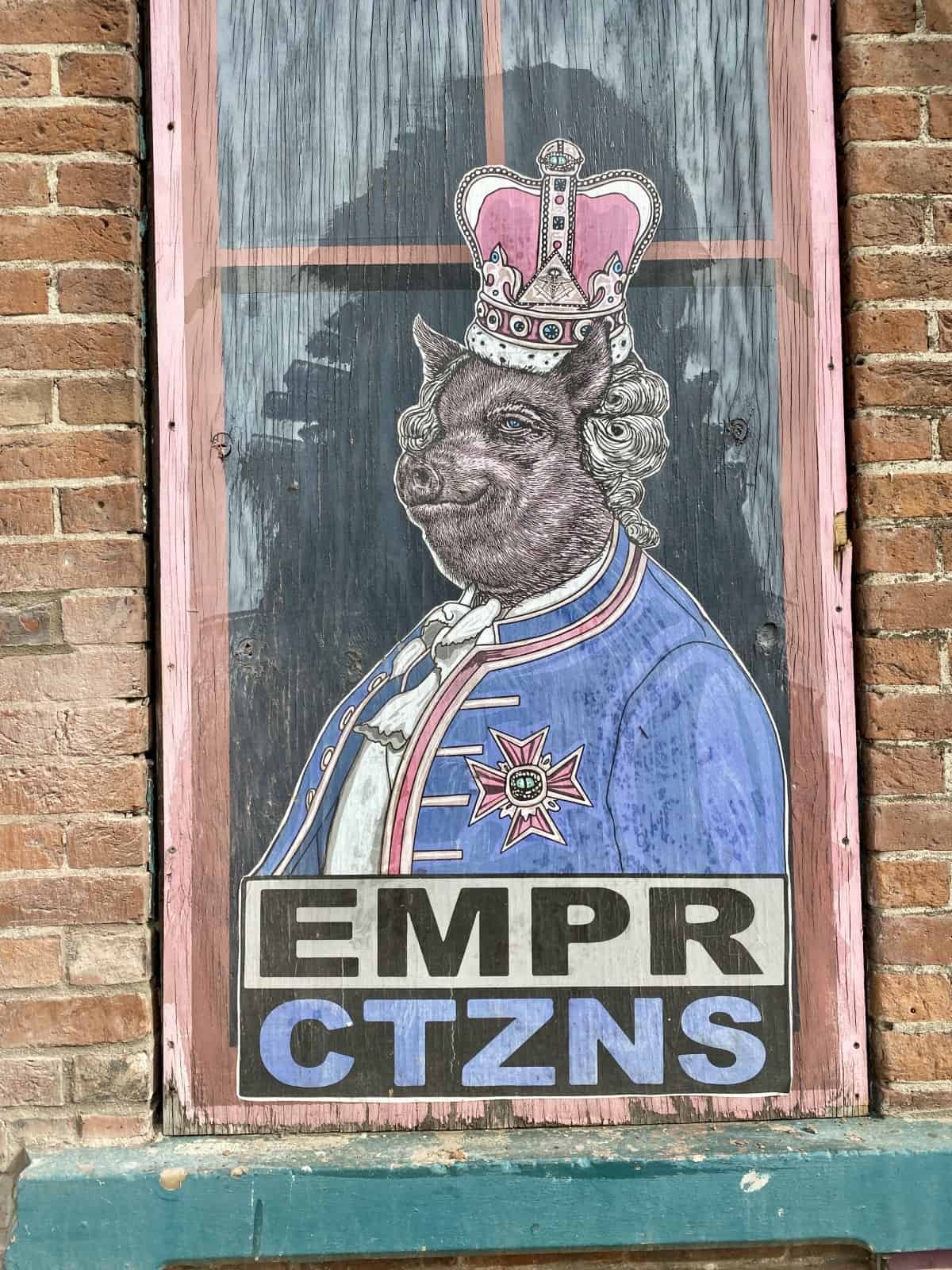 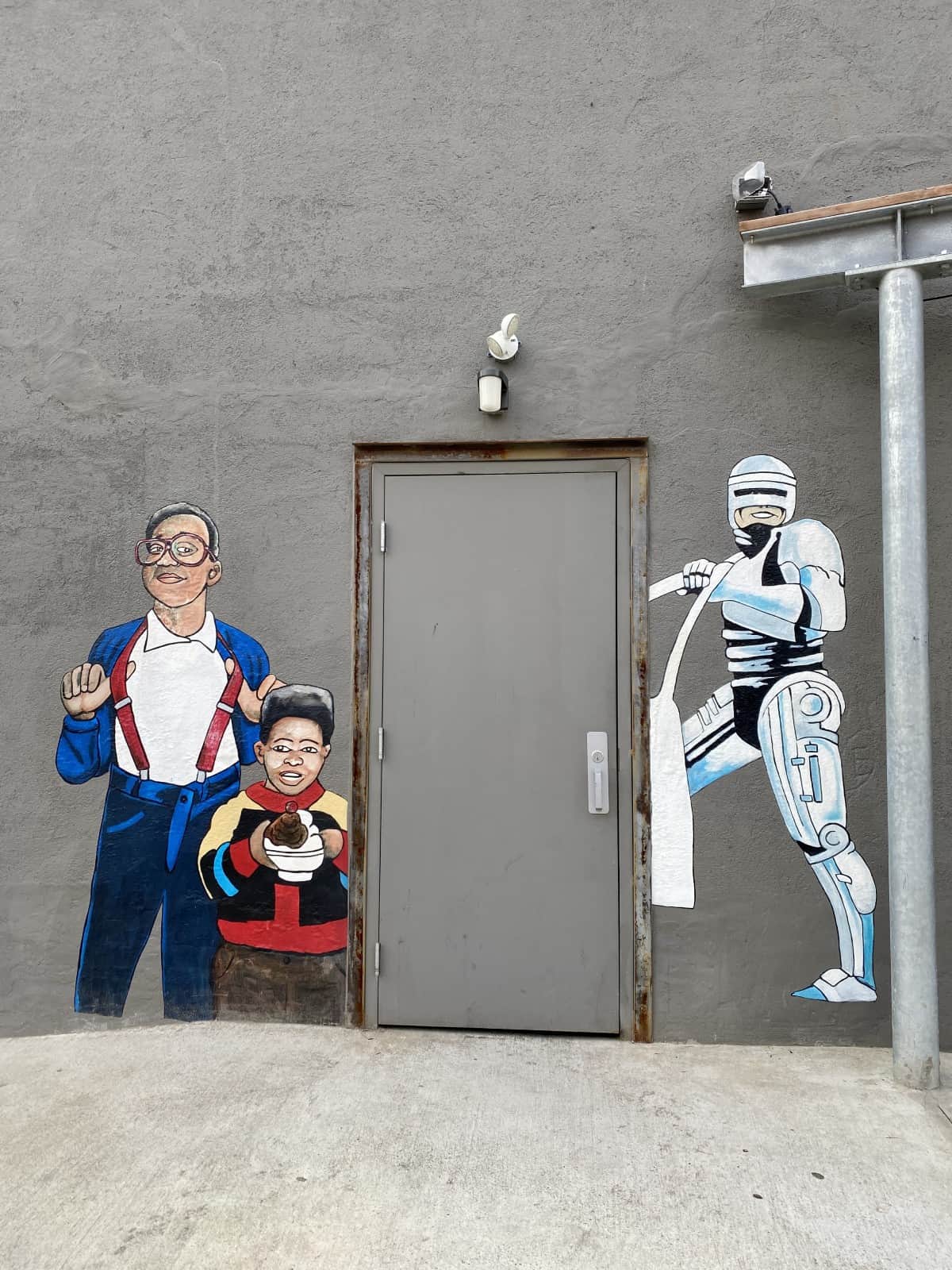 Just a tiny bit up the street from core OTR (but still considered OTR) is the Brewery District, another great place to see Cincinnati’s street art.

I went up there to pay a visit to Rhinegeist Brewery, and spent a little time walking around the immediate vicinity.  I’m sure I didn’t nearly do the area justice, but loved the street art I was able to find.  This one of the hops plant is especially lovely, and several of the murals in this area reflect that brewing process. 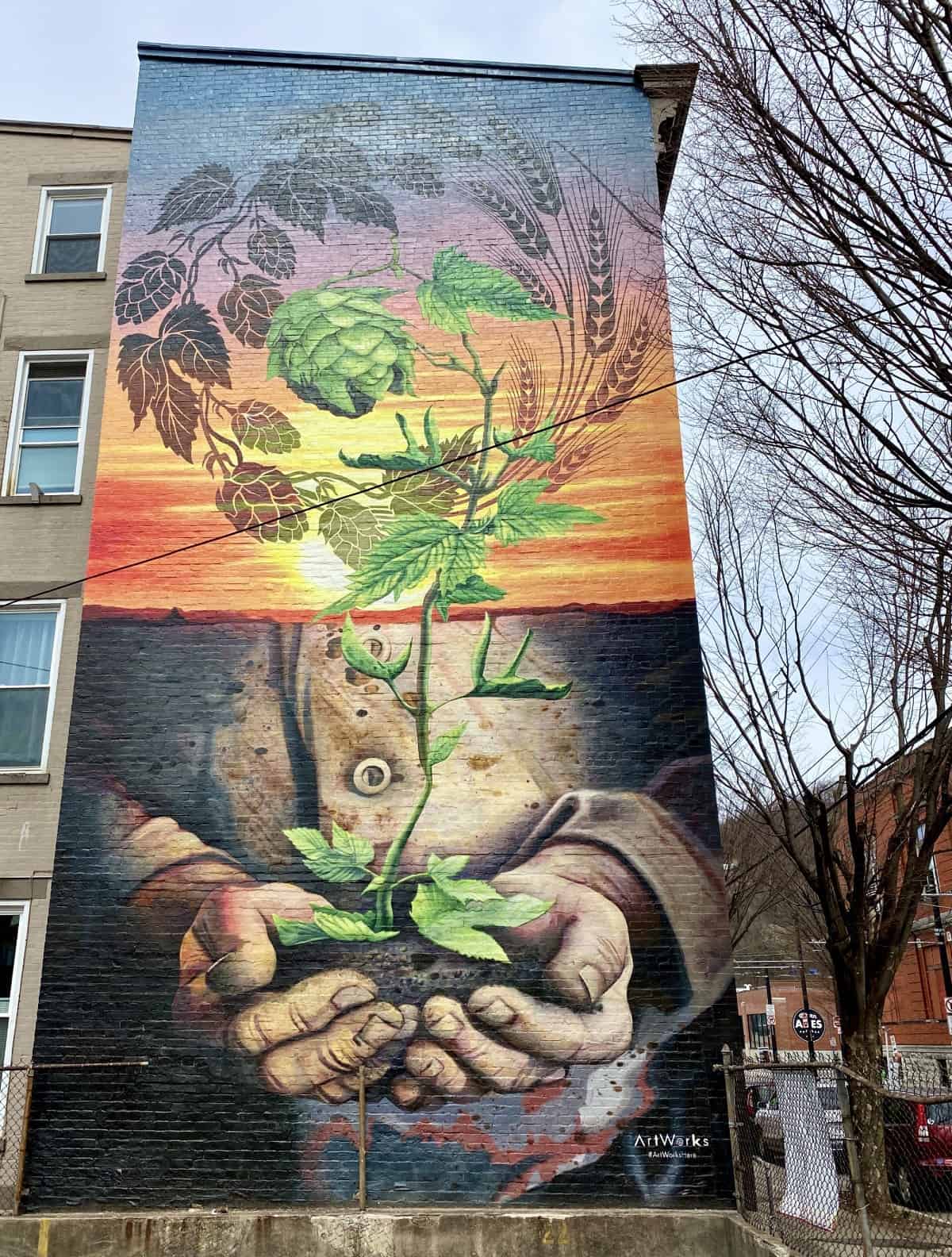 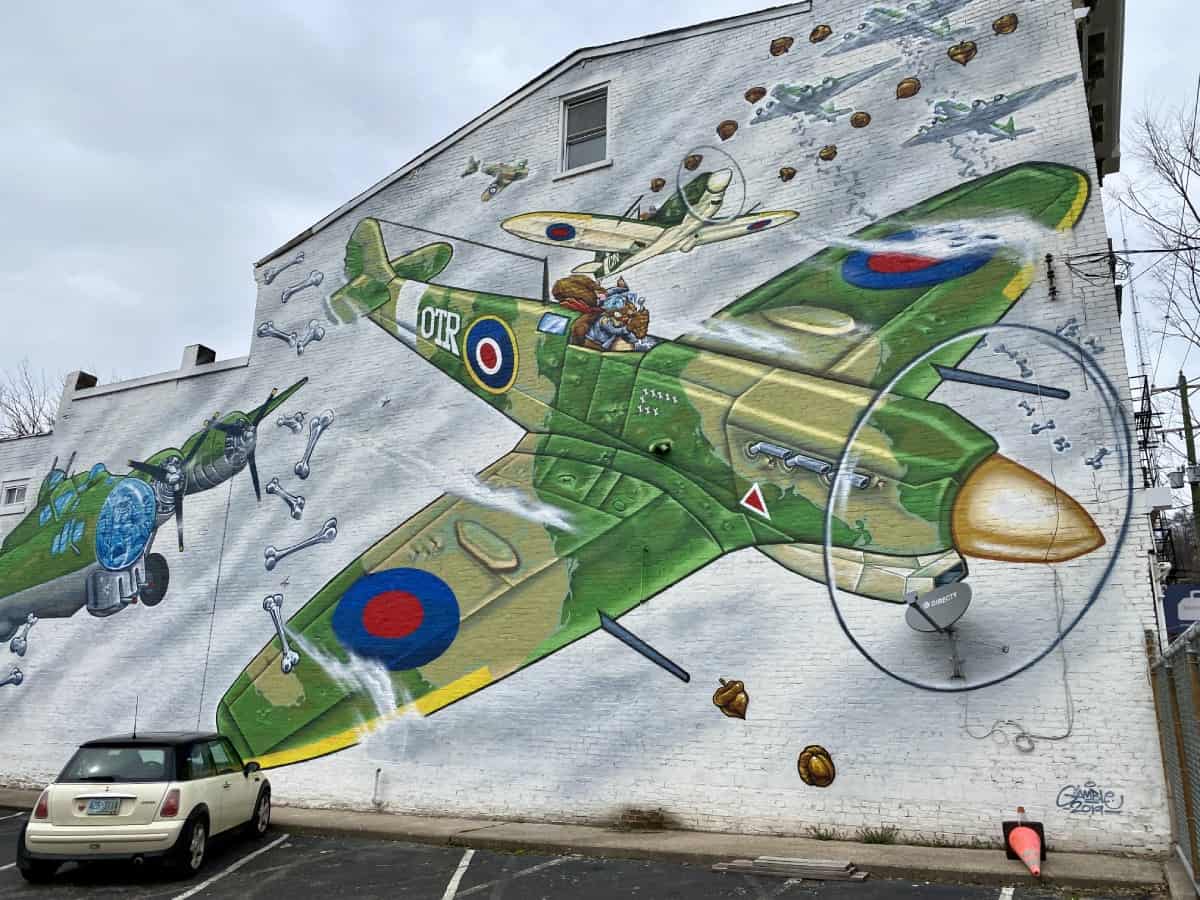 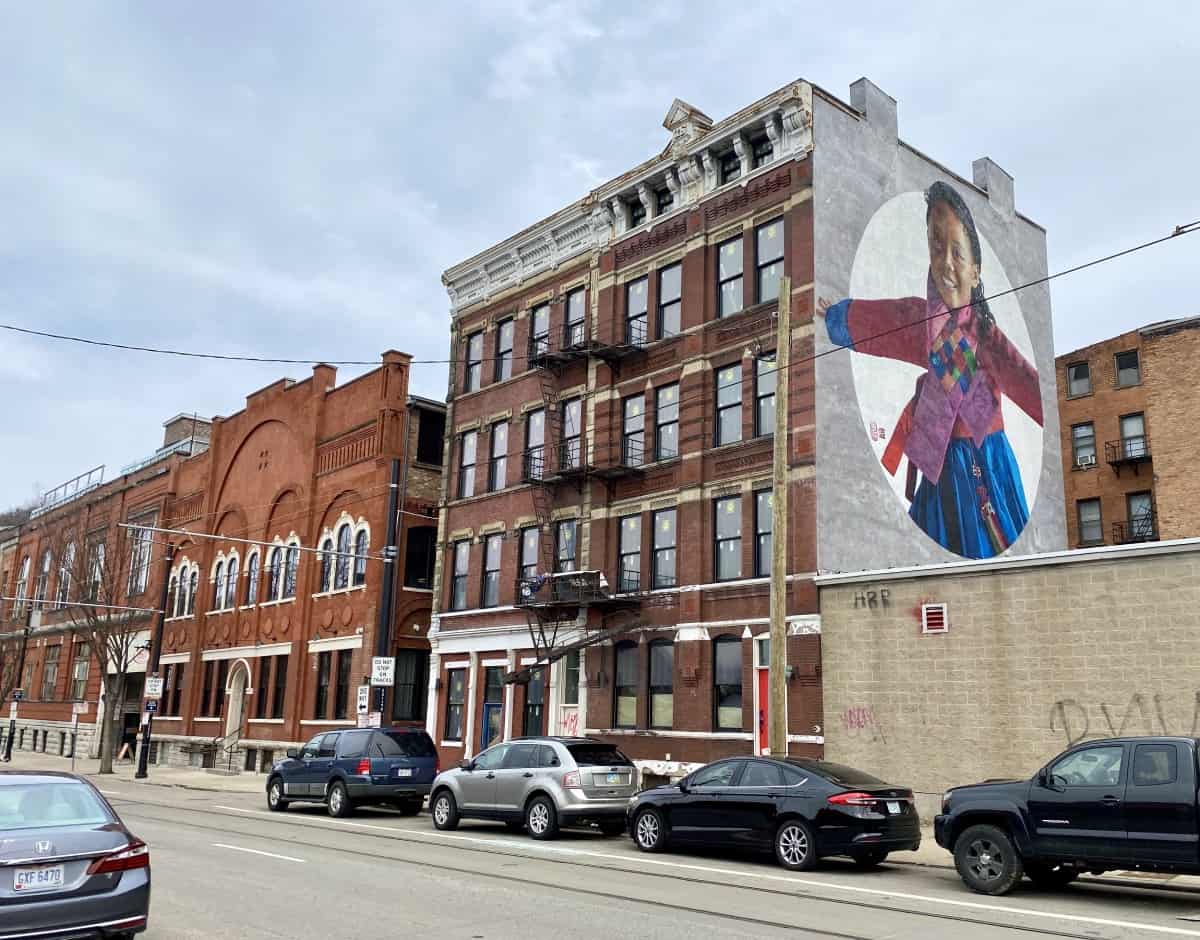 Right toward the bottom of OTR on Vine and headed into downtown you’ll see some fun pieces and some of the tallest murals in Cincinnati, including the pale green “Energy and Grace” below (one of the tallest in the city).

As you head past Washington Park and the beautiful historic Cincinnati Opera House, you’ll see some cool ones like the music angel (“Golden Muse”, apparently) below. 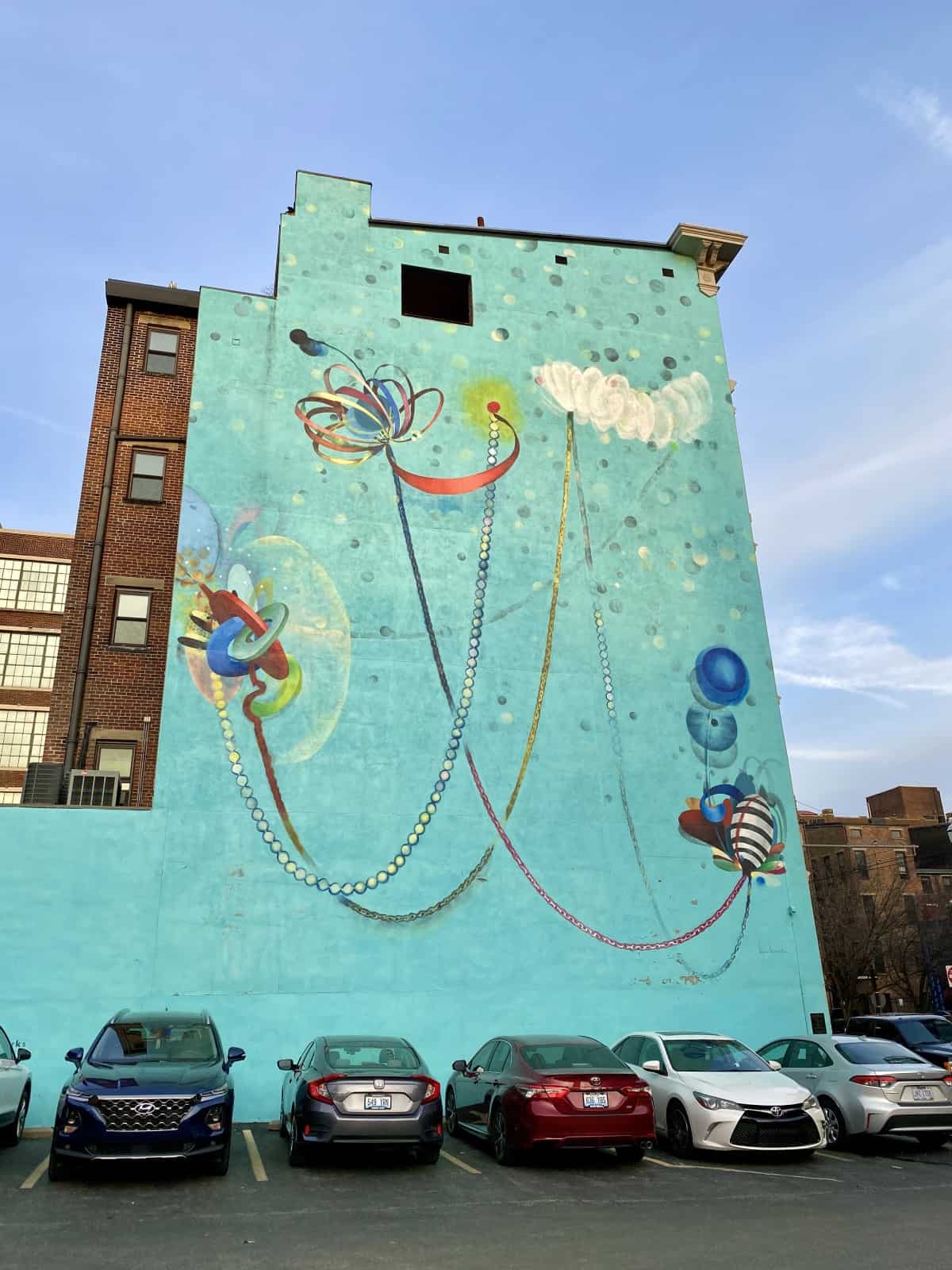 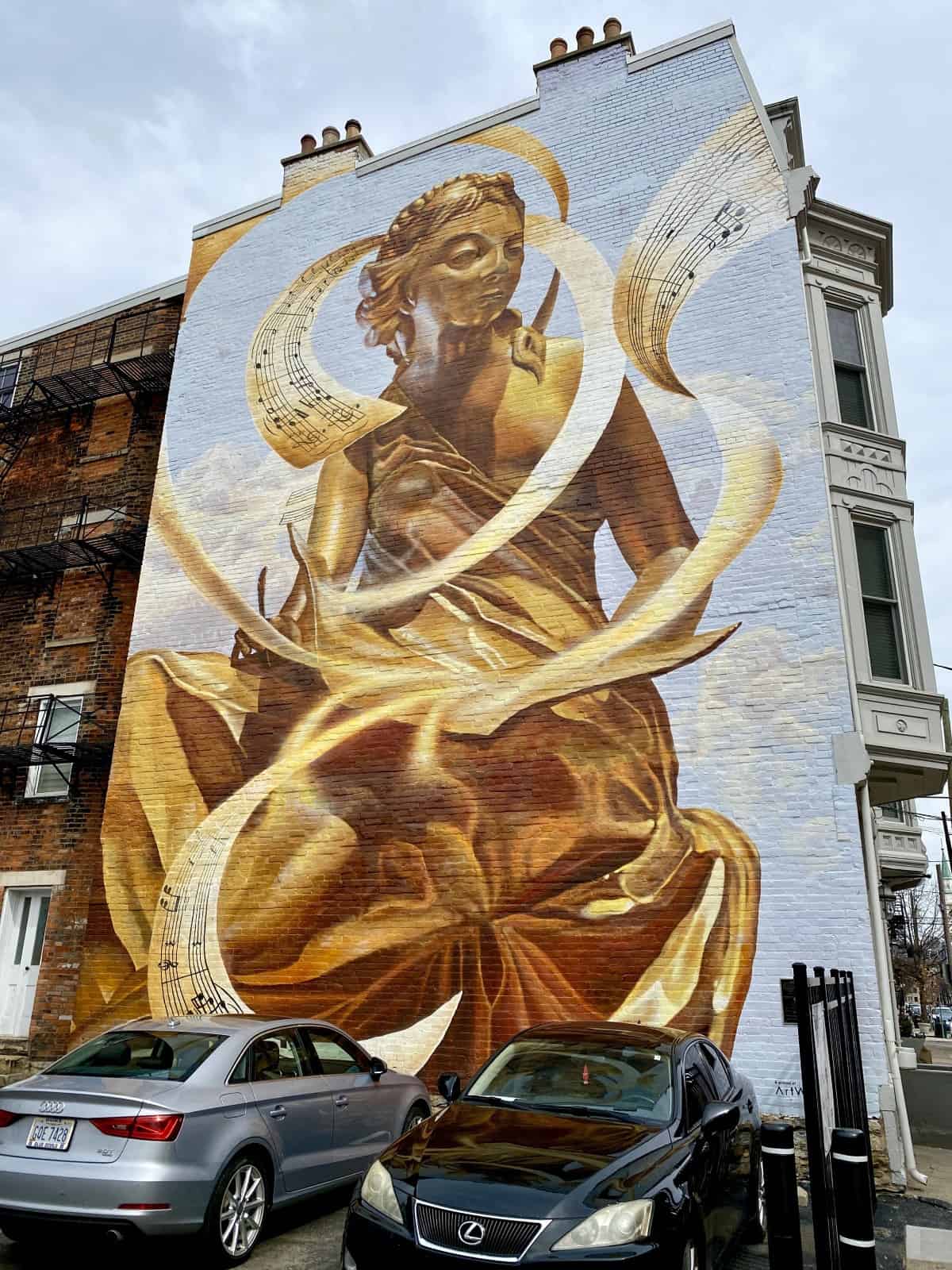 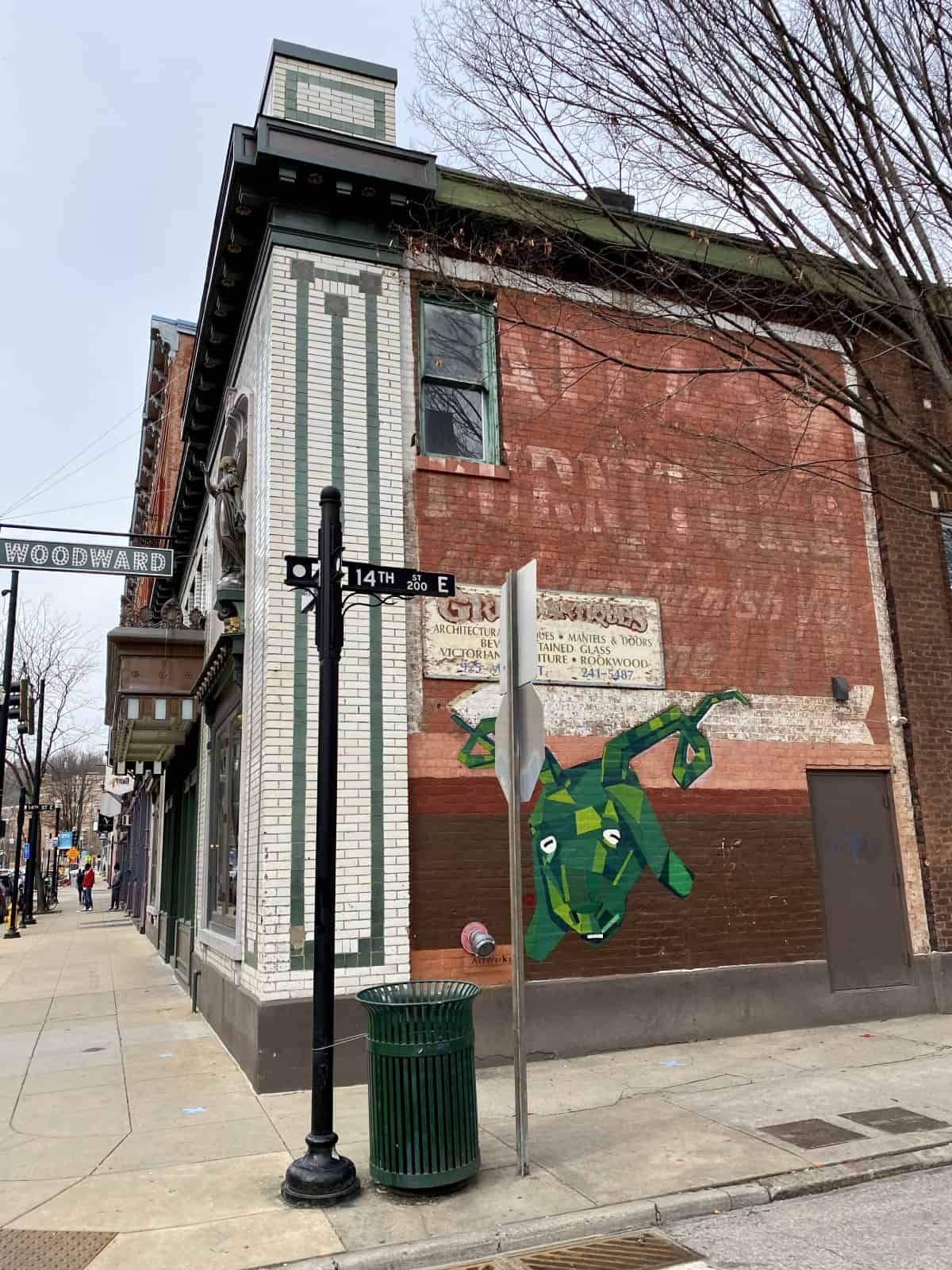 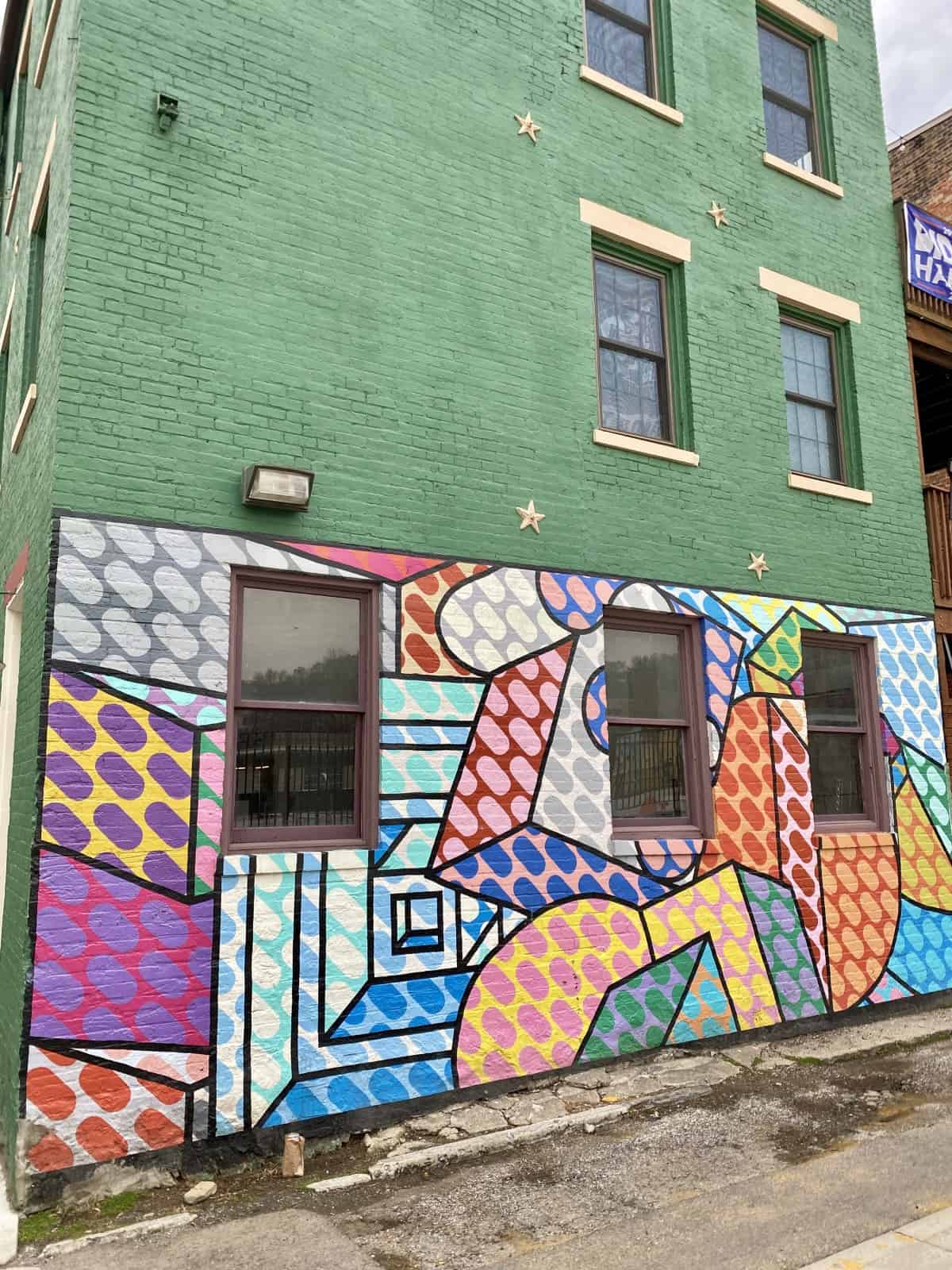 This trippy kaleidoscope was definitely in my top-five faves.  The intensely saturated colors, intricate details…I could stare at this for a very long time.  And it’s MASSIVE! 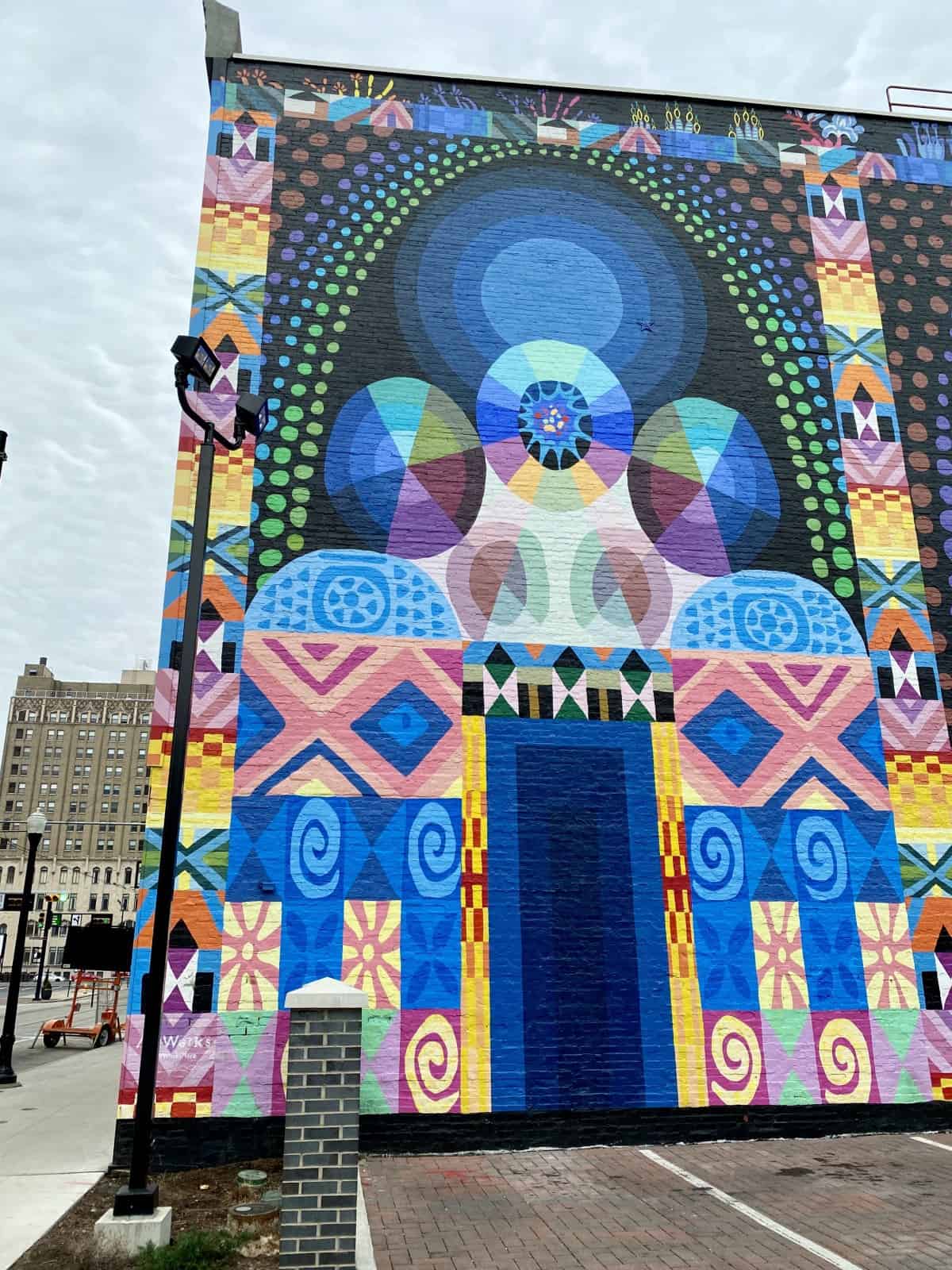 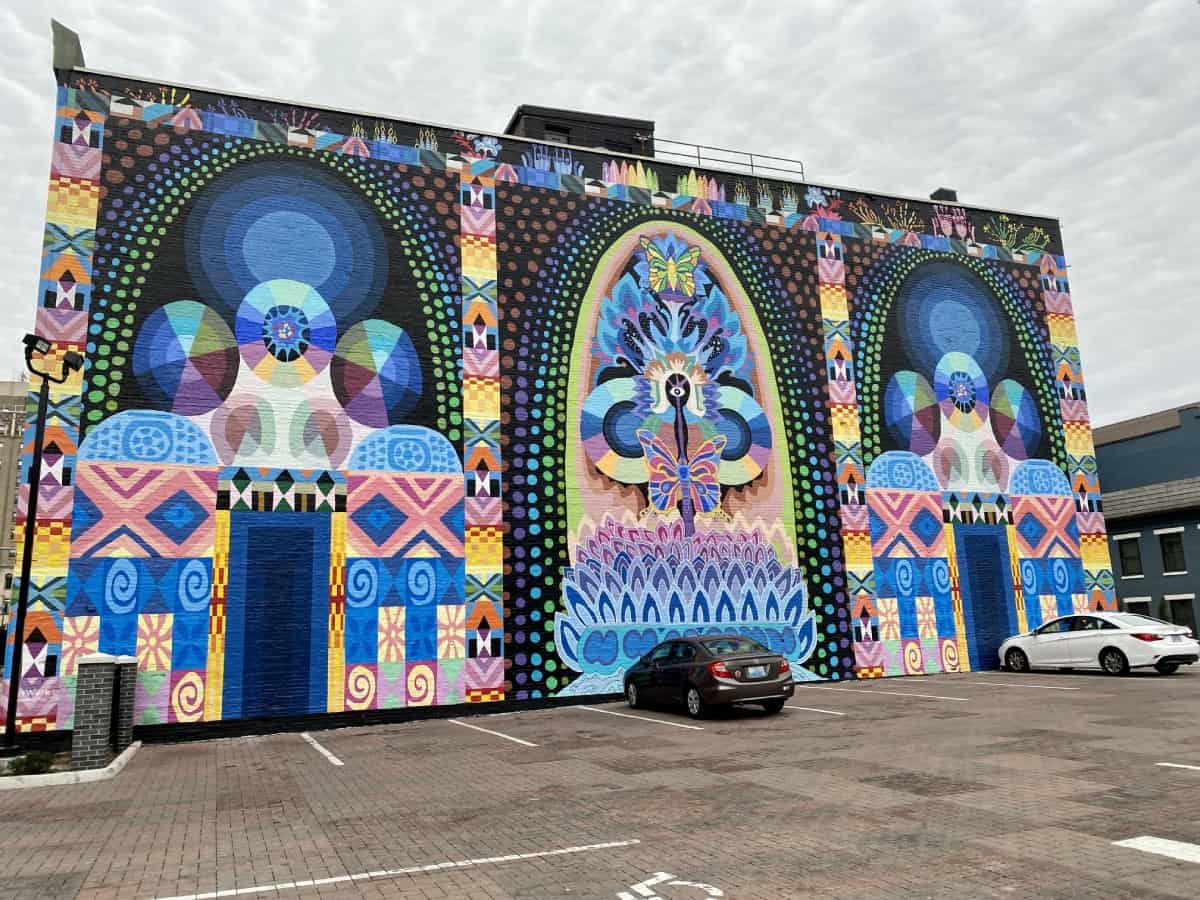 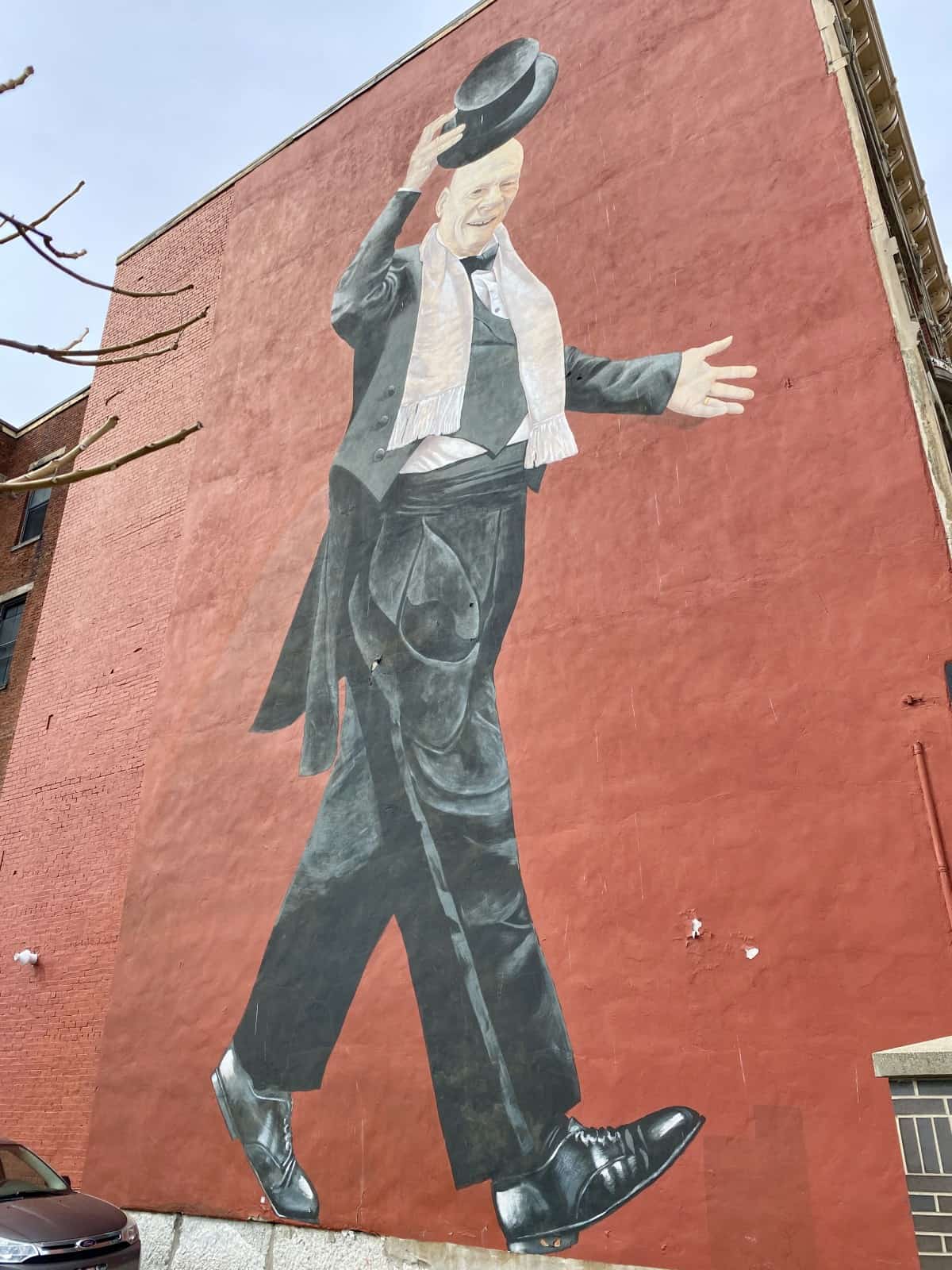 Still heading into downtown you’ll see some really major ones, like Martha, which has such a delicate sense of movement to it.

I didn’t know it when I snapped my pic of it, but the mural of birds below is of Martha, the last passenger pigeon who ever lived.  She passed away at the Cincinnati Zoo in 1914, and this mural (which is a reproduction of a painting) highlights the importance of wildlife conservation. 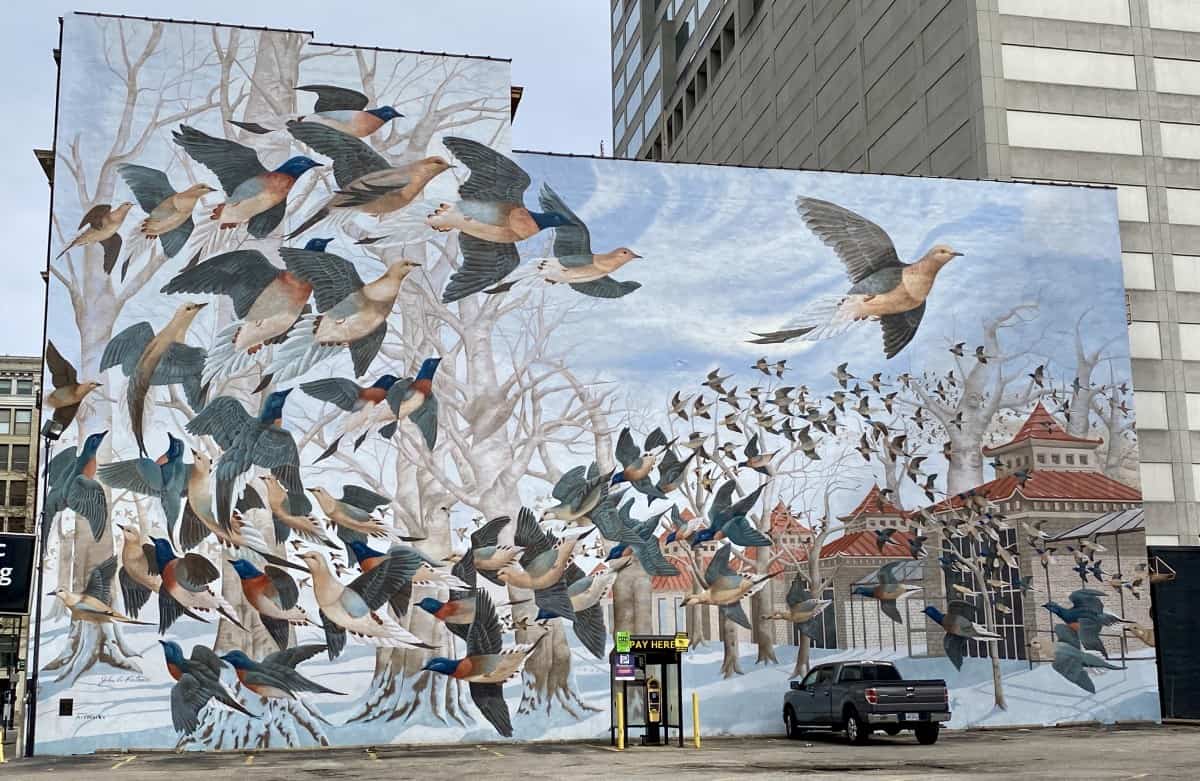 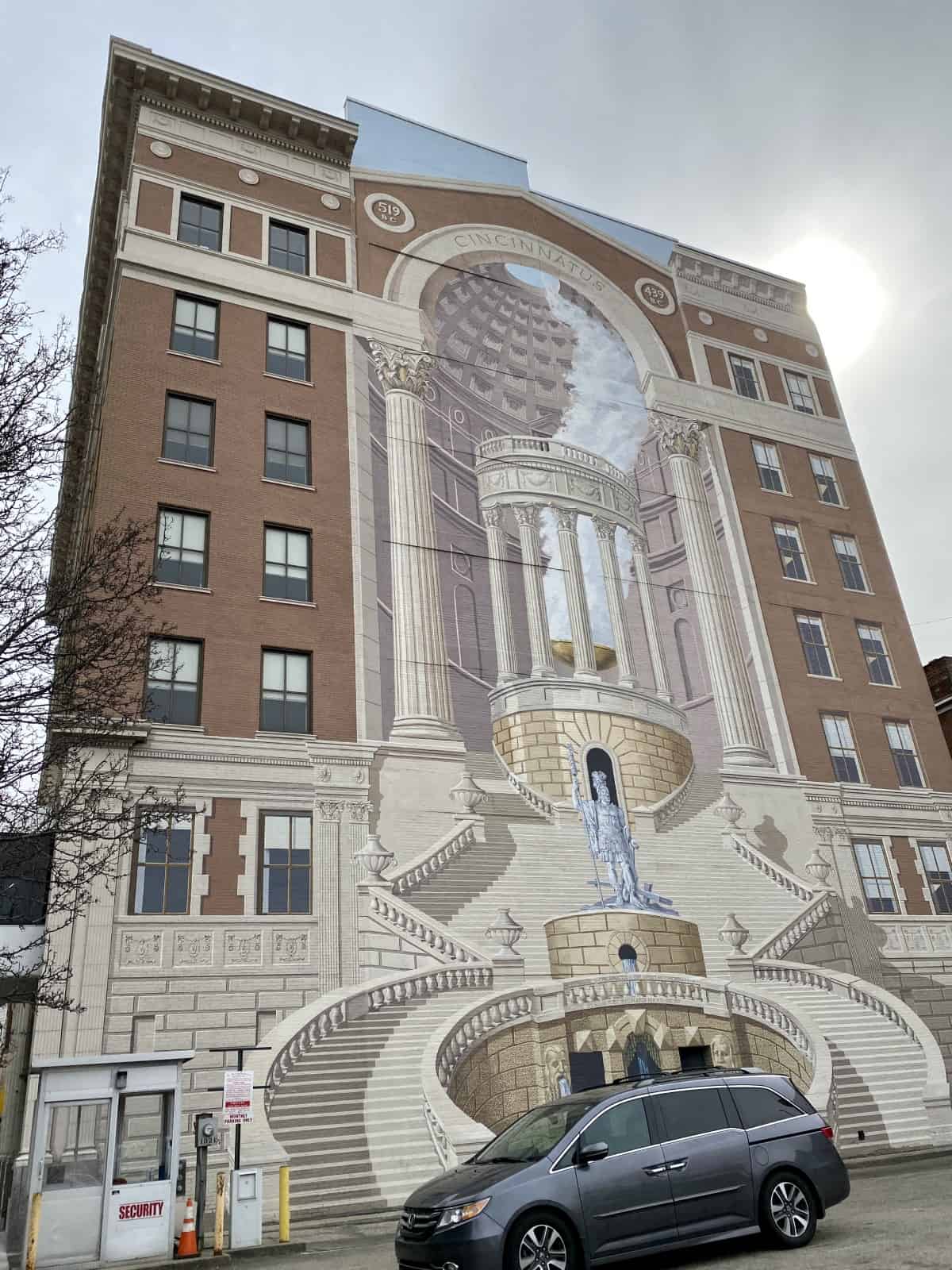 And finally, I found a cat!!  Right at the end of my trip I found Crazy Cat, Crazy Quilt, a tribute to a local Cincinnati artist.  I love the cool building juxtaposed behind it as well. 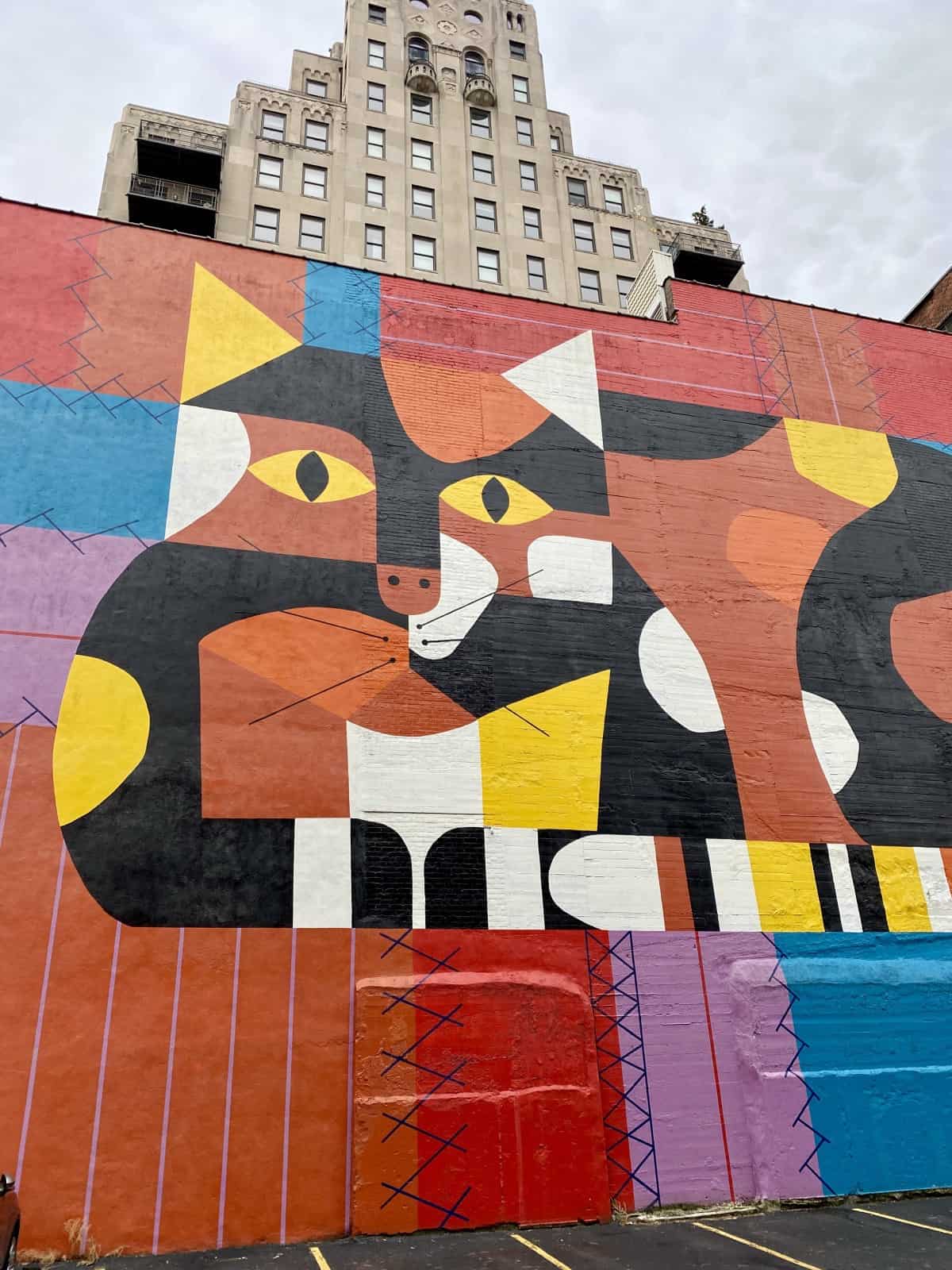 I was in Cincinnati for less than 48 hours and I know I missed lots of the most well-known murals, but I feel like I really got a good taste of the diversity of styles and energy that the city has created! 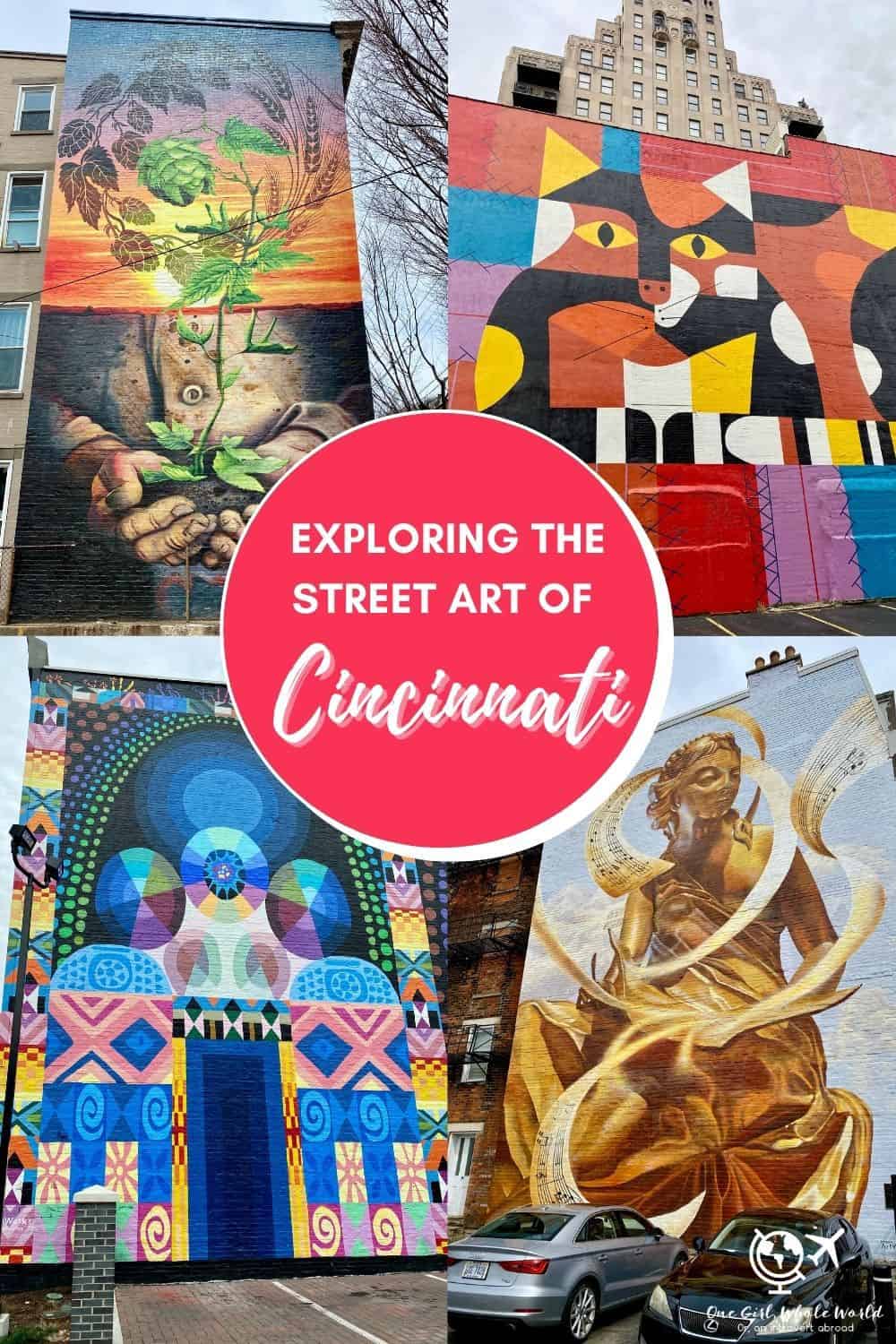 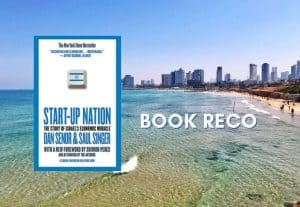 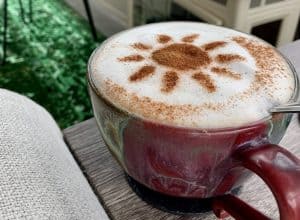 13 Cool Souvenir Ideas To Pick Up While Traveling