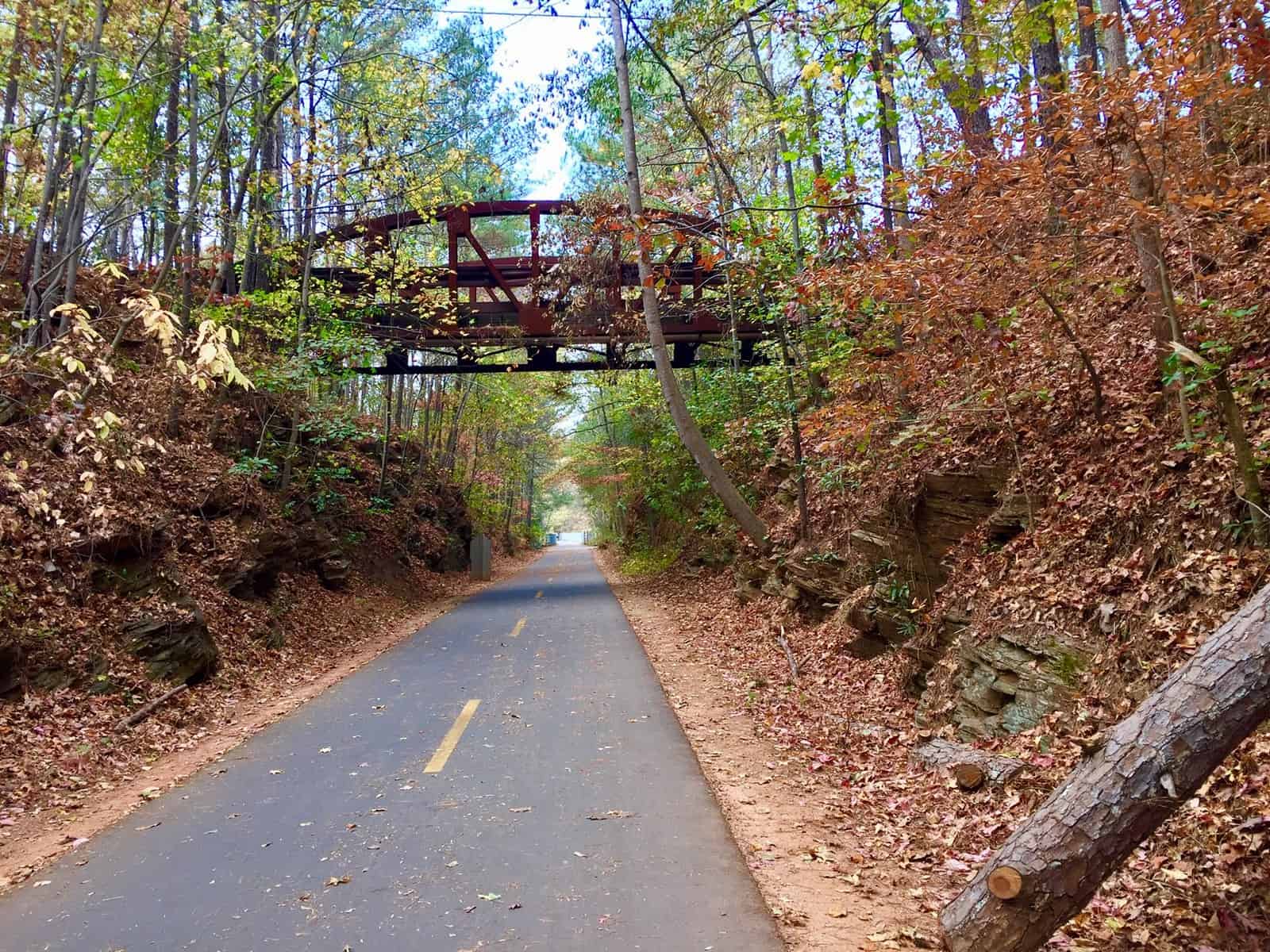 Those who are new to Atlanta (or just visiting), may not realize how much NATURE this big city has to offer.  One of the things that I really loved about living in there—and that I desperately miss having moved away—is how many amazing Atlanta trails there are to explore.

From paved trails to mountain biking, waterfalls to quiet forests, the trails in and around Atlanta have something for everyone.  In fact, something many people don’t know is that one of Atlanta’s many nicknames is “City in a Forest”! 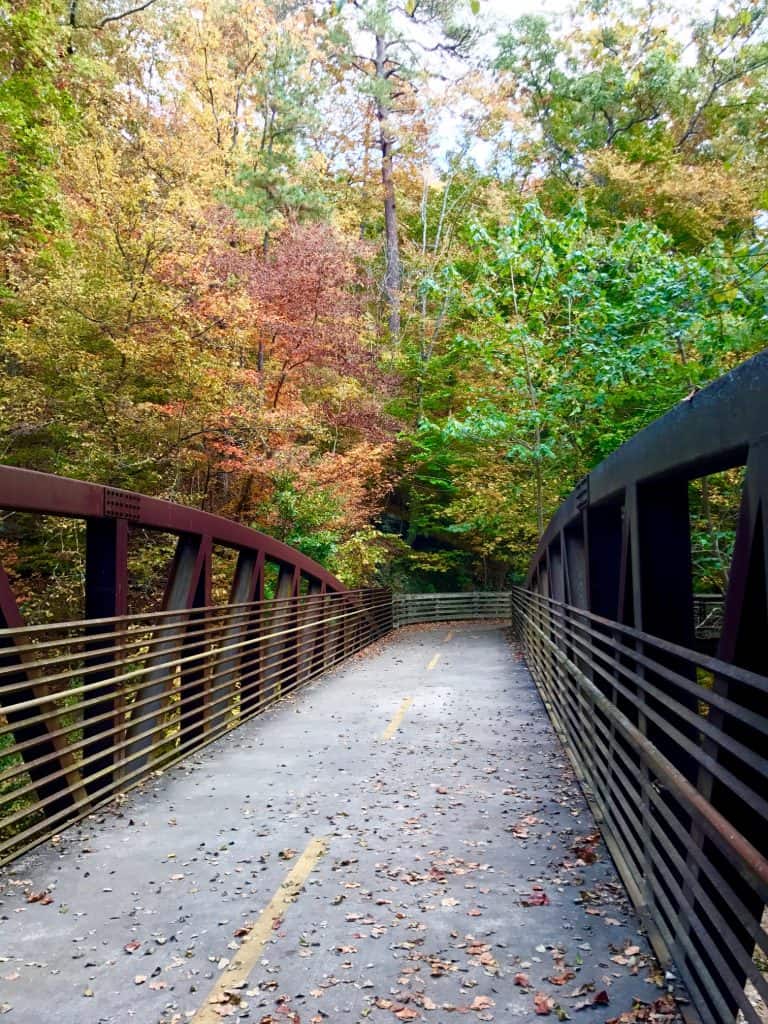 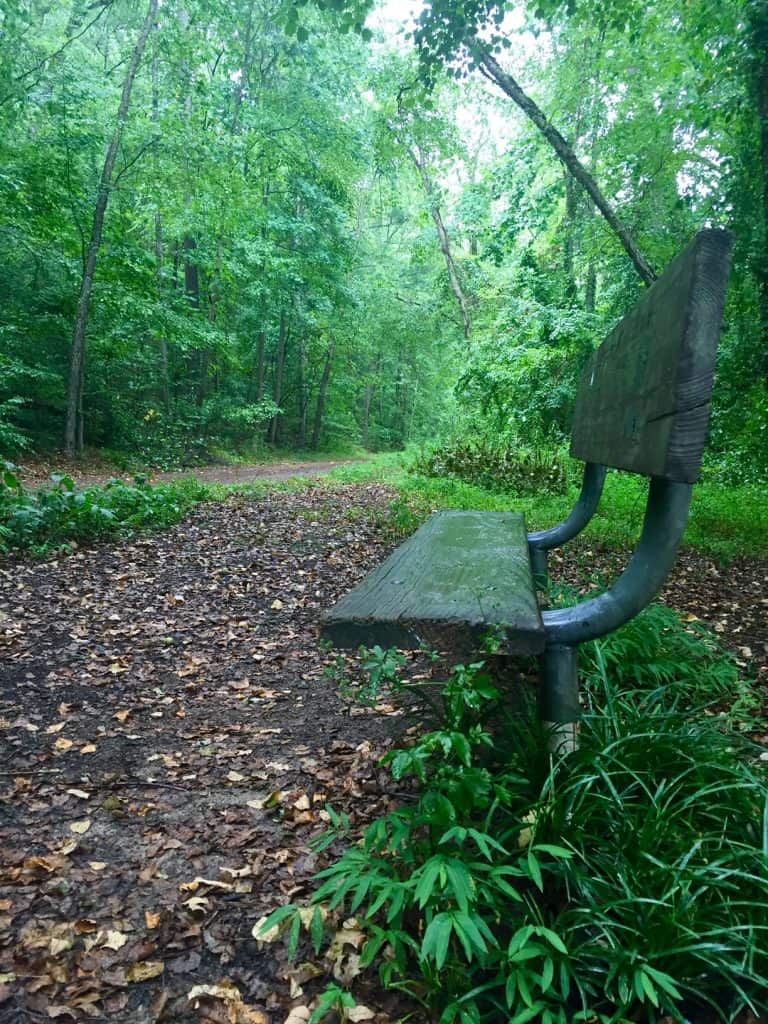 When you say “City in a Forest”…

The city itself has tons of trees, so you feel surrounded by greenery even in the deep parts of the city—Atlanta has about 36% tree coverage (the national average is 27%, and no other major American city has this much).

But besides trees overall, the city is blessed with an abundance of forests and great running trails, including having the Chattahoochee River National Recreation Area sitting right on the city limits.

That’s not even counting Piedmont Park (189 acres right in the heart of the city) and the Beltline, which I won’t get into in this particular post.  Both are great in their own way, but from where I lived, they were a pain to get to and park at, so I didn’t visit as often. 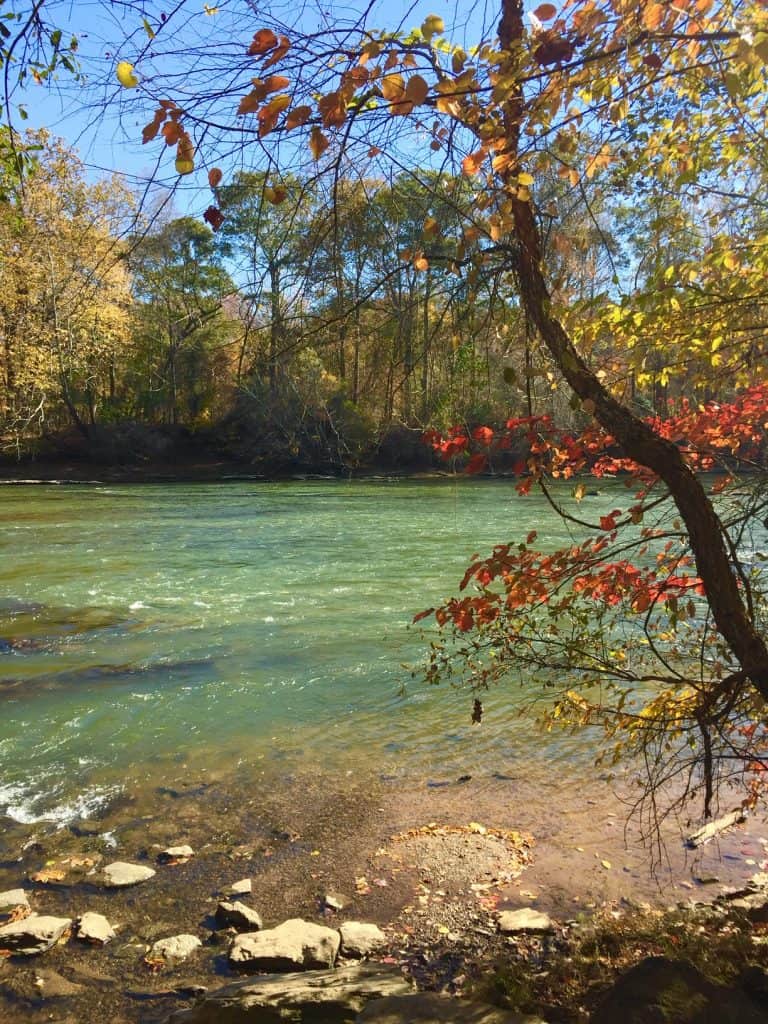 Some of my favorite Atlanta (running) trails in this post:

I’m not positive exactly where the line for each trail is, but this connection of trails is hands-down my favorite in Atlanta.  It’s paved, and about half-flat and half super-hilly.  It’s good for walkers, bikers, strollers and wheelchairs, and dogs.  And it’s in a great central location, right by Vinings and easy access to both 285 and 75 highways.

This is part of the Chattahoochee River National Recreation Area (CRNRA), and the turn-in for the parking lot is just south of the Kroger on Cobb Parkway.

There’s plenty of parking as well (though it does get crowded in the summer when crowds are “shooting the ‘Hooch”).  Parking is (last I checked) $3 each time or like $35-40 for a year pass to all the CRNRA trails.

From the parking lot you’ll walk just a short distance til you at the trees and river, and then walk along the river for a while.  Then you’ll veer off and walk along some smaller tributaries—though don’t be fooled, those become raging streams when we’ve had a bunch of rain! 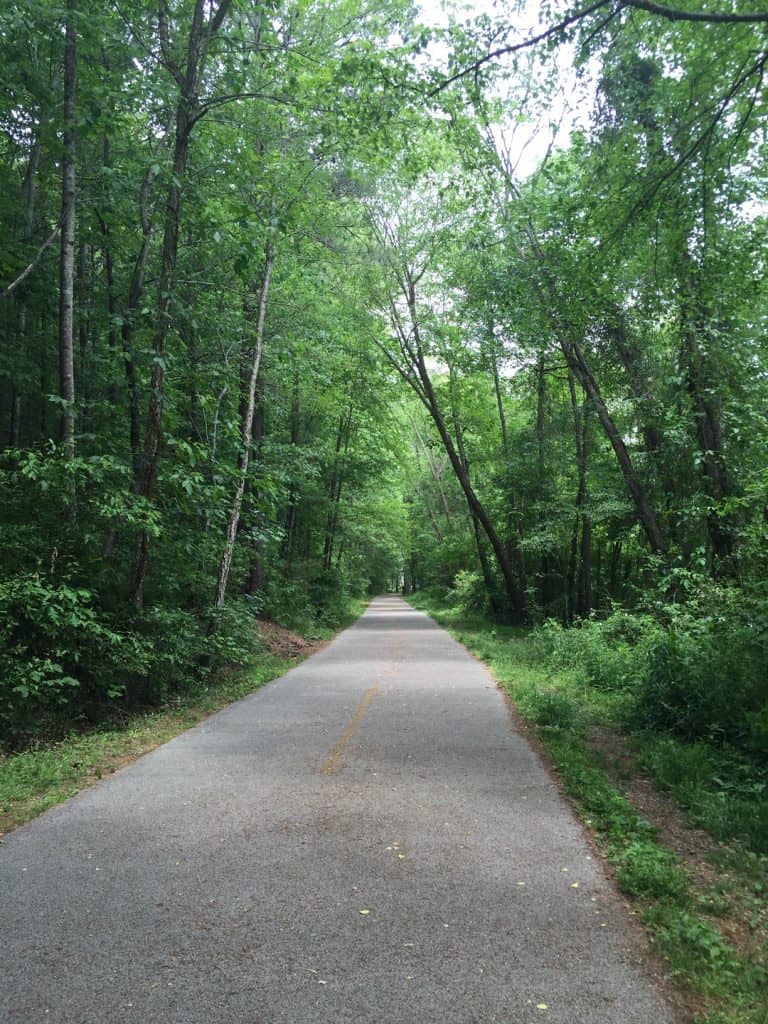 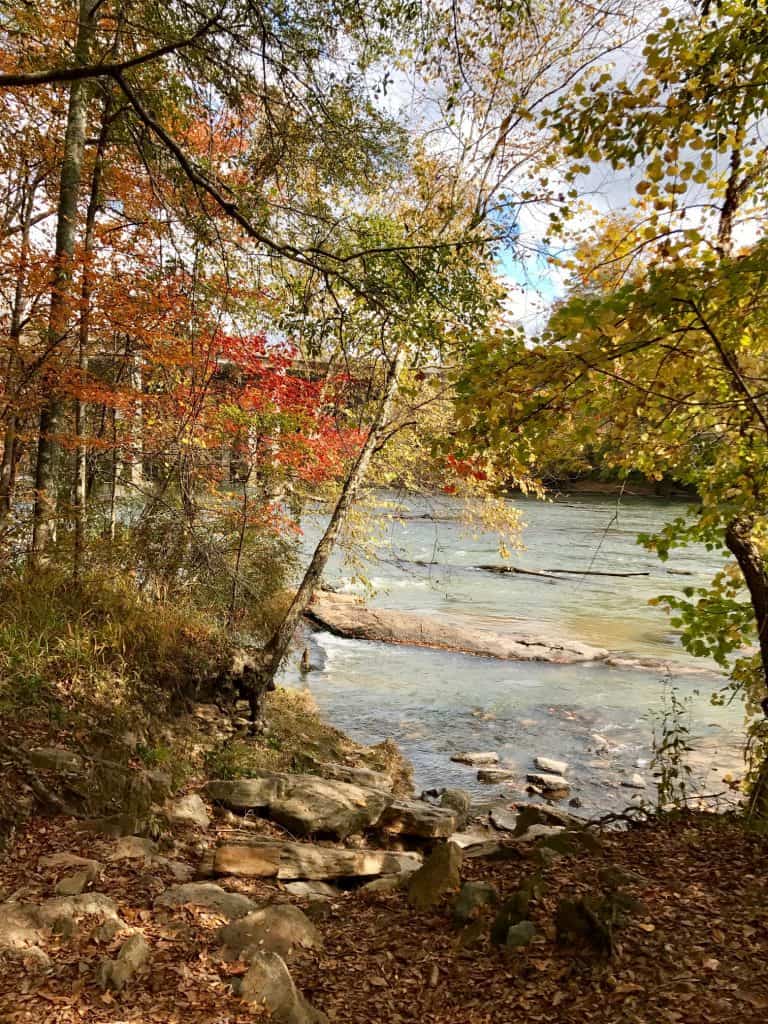 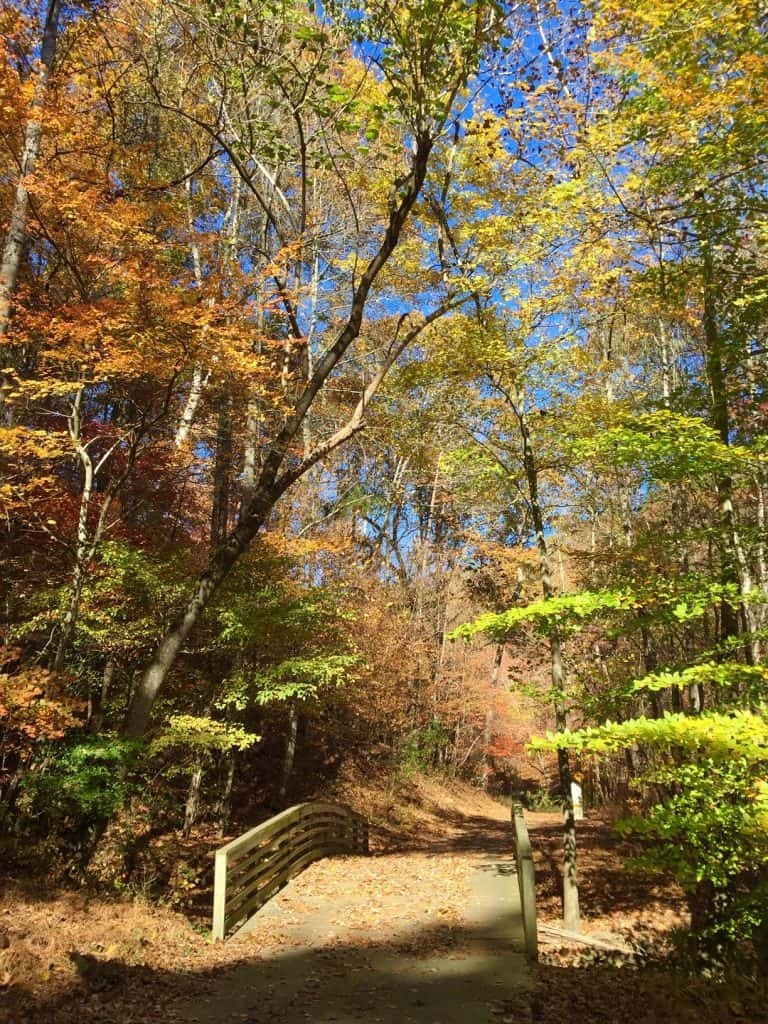 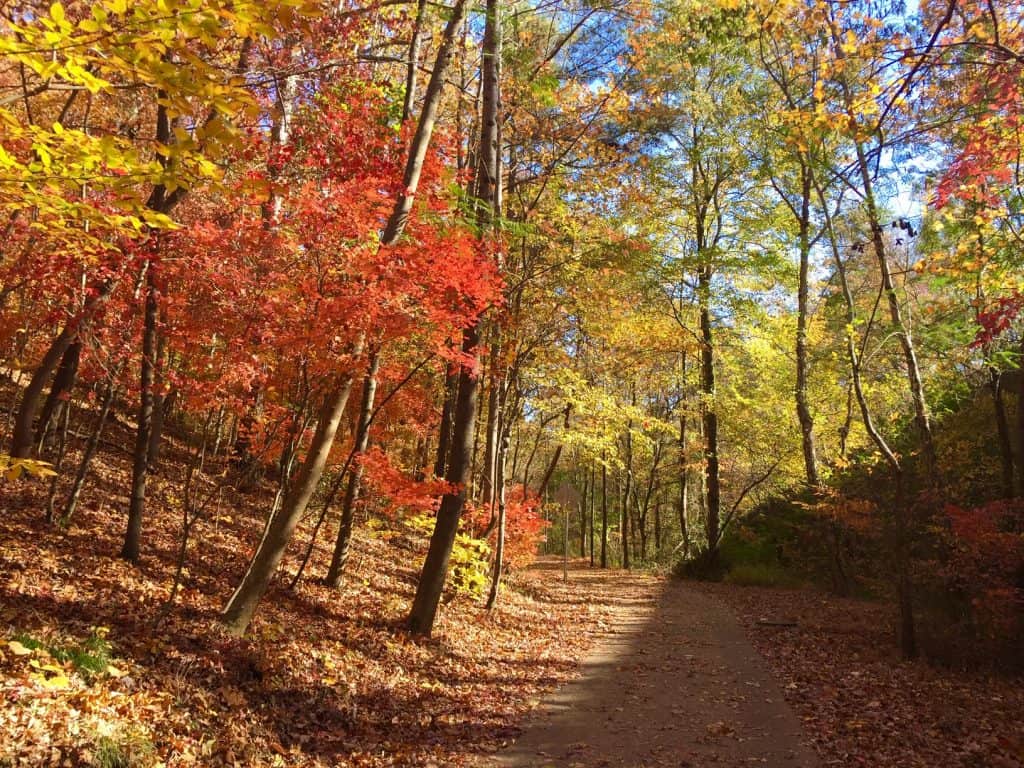 I used to run here every weekend, and walk on Saturdays.  The majority of it is shaded, though the hilly stretch is totally exposed to the sun (ohhhh the SWEAT).  In the spring it’s amazing watching everything bloom and flower, and I absolutely loved when the fall leaves changed and it was a blanket of vivid reds, oranges, and greens!

And there’s quite a lot of wildlife…in particular I used to always happen upon a gorgeous blue heron while I walked.  We were friends 🙂 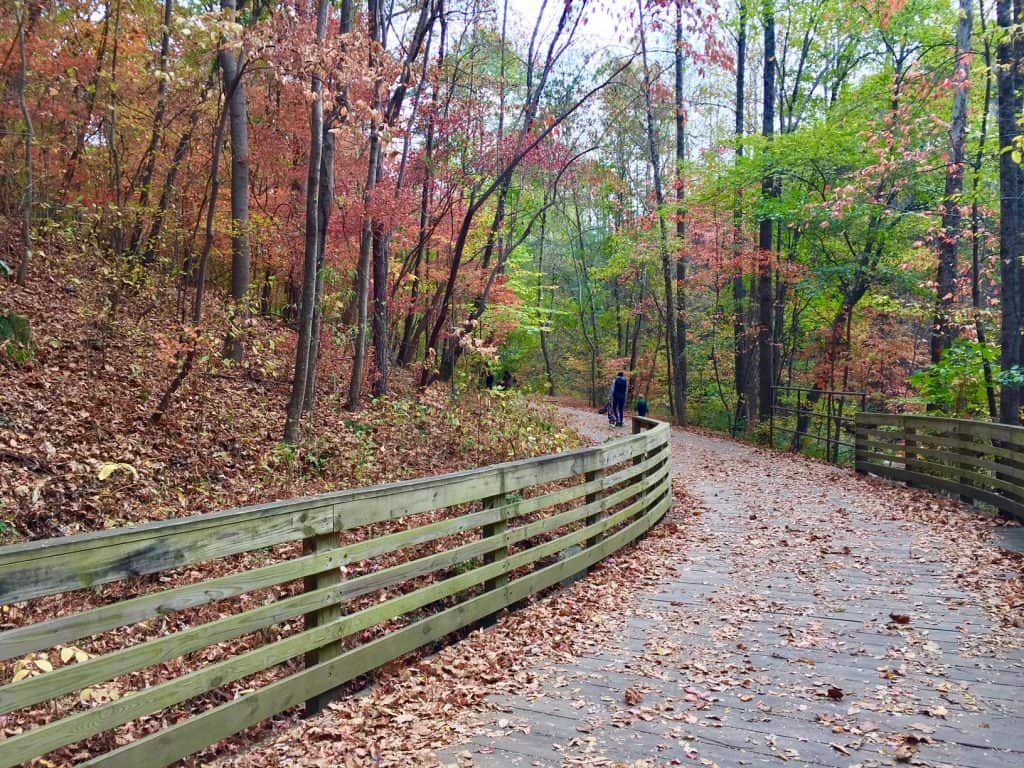 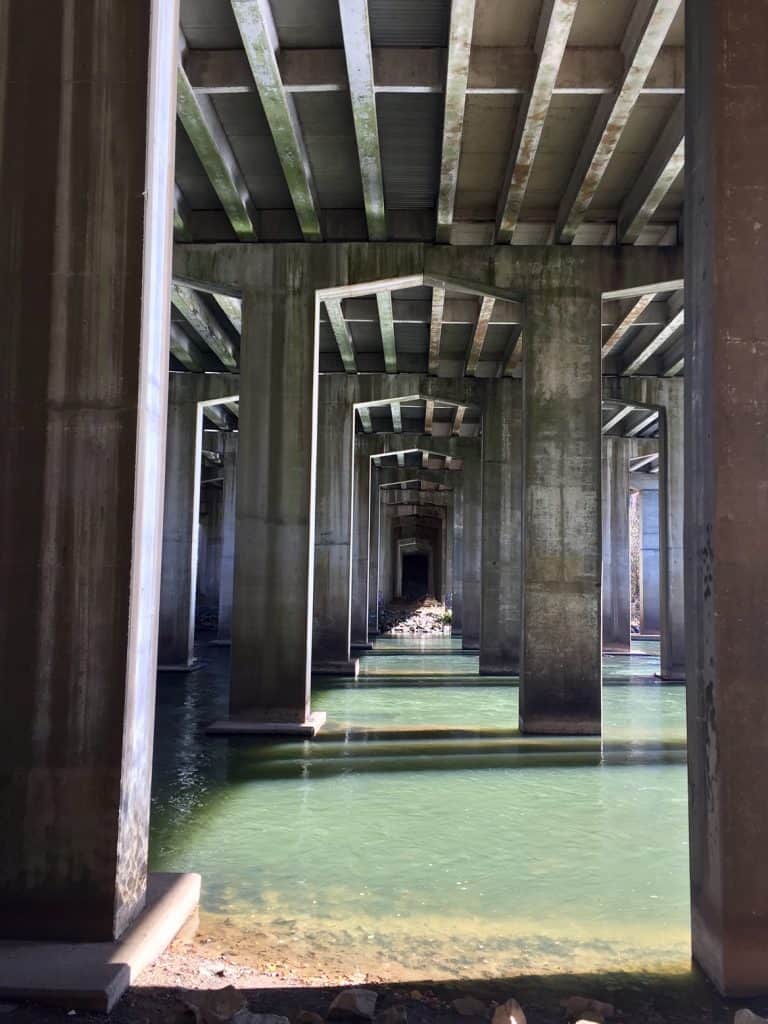 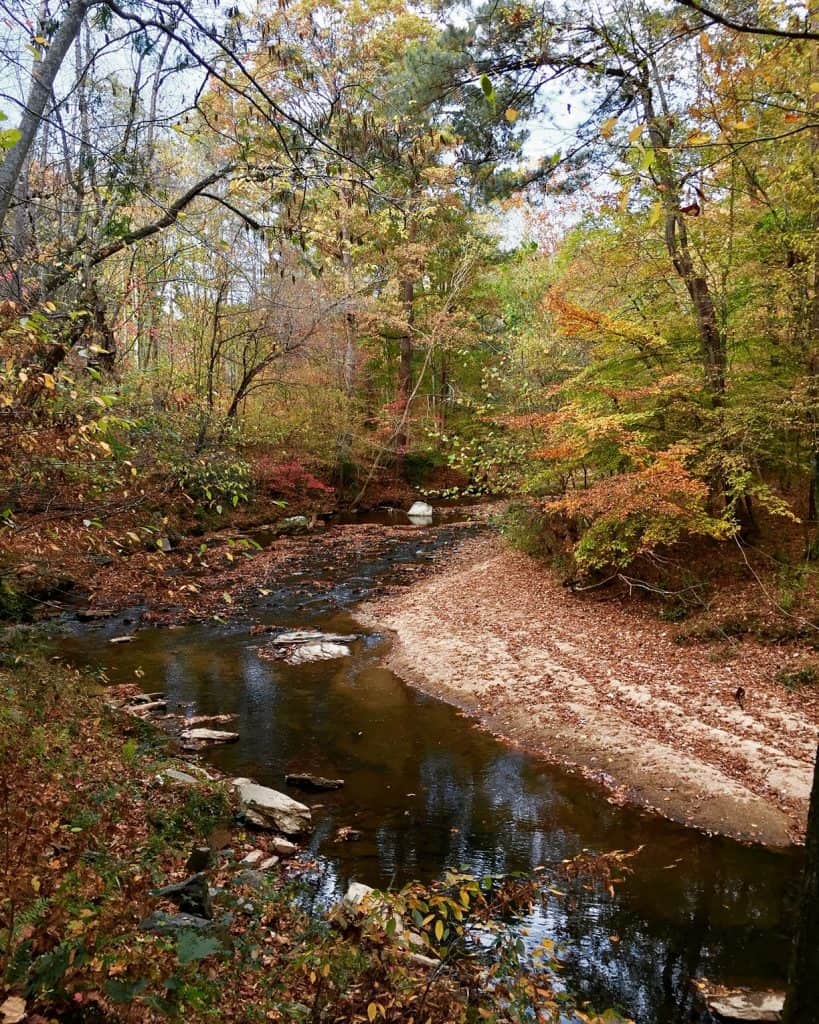 It’s about 3.5 miles to the end and back.  And the end (near the Weather Channel building) you can connect over to Cochran Shoals if you’re biking or something, but otherwise just turn around and head back to the parking lot.  You can learn more about these trails here to plan your visit.

This was my other main go-to Atlanta trail, and it had three major things in its favor—long, flat, and shaded.  That’s right, this trail was literally a life-saver, because I could do my long runs during the summer and avoided heatstroke.

The Silver Comet is an almost 62-mile trail that goes from Atlanta (Smyrna, technically) all the way to the Alabama state border.  And if you want to get technical, it then connects up to another 33-mile trail from there.

So for bikers or long-distance runners it’s a lifesaver.  It’s also paved, flat, and has limited road crossings.  And honestly, it’s really beautiful. 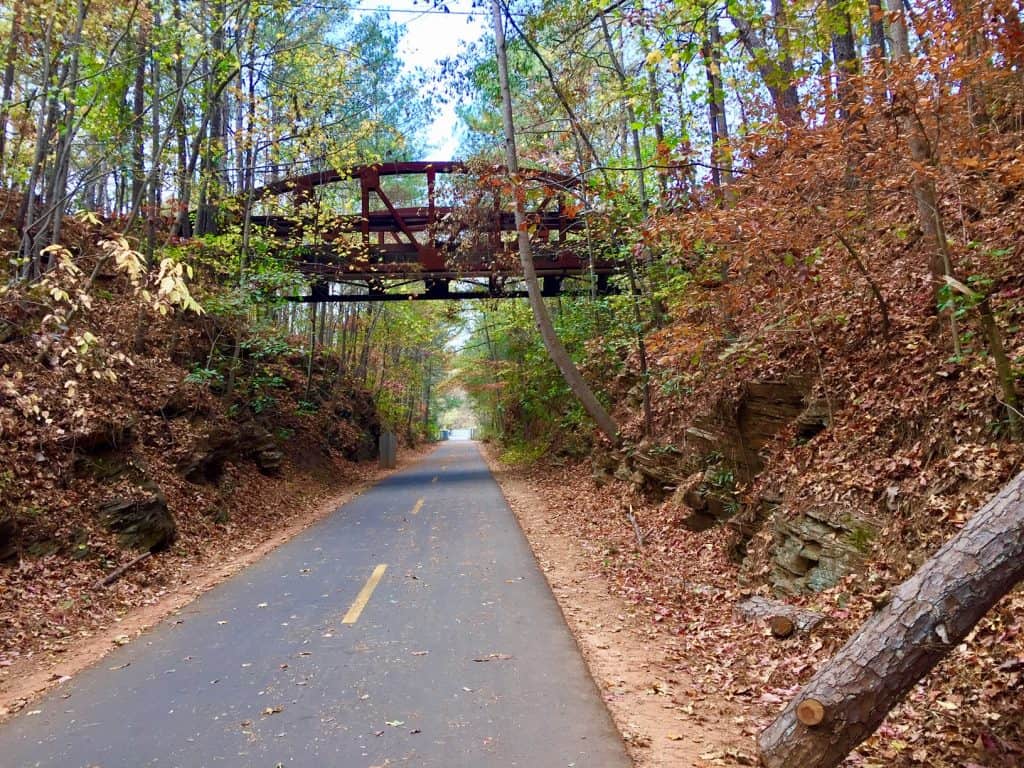 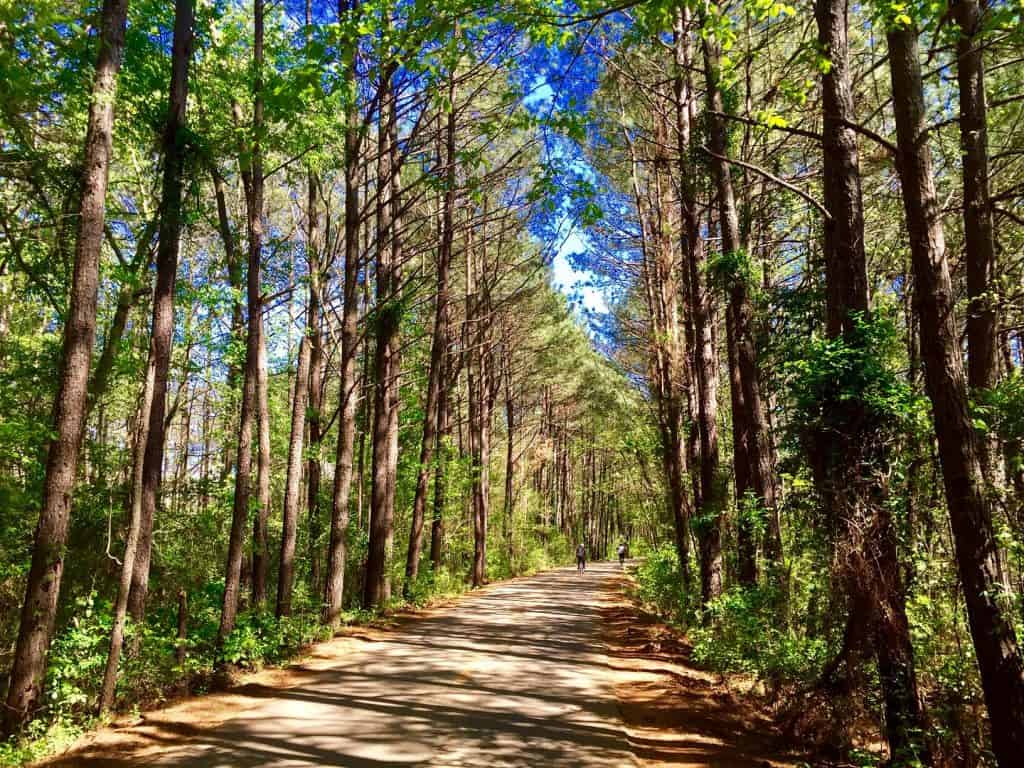 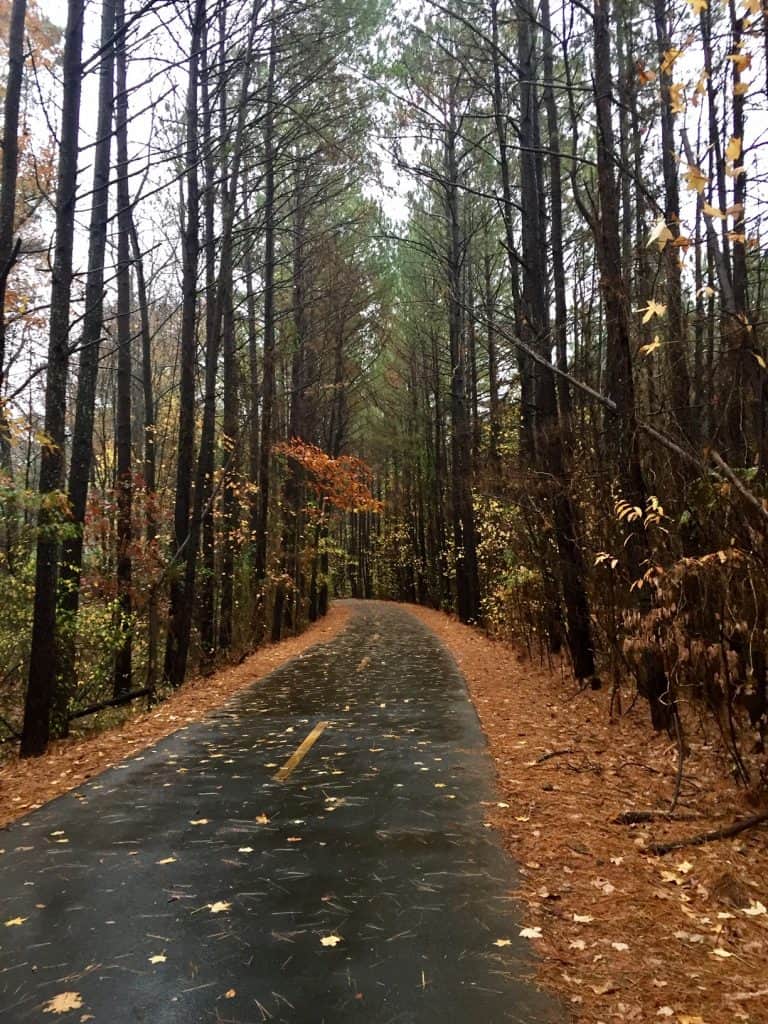 There are a number of trailheads and parking areas along the Silver Comet, but I always parked at the very first one, Mavell Road.  There’s quite a bit of parking here, and it tends to overflow when needed on the weekend to the elementary school next door.

I only ever went about 3.5 to 4 miles down and then turned back (I’m not an insane runner so a total of 7-8 miles was my max), but it was almost entirely shaded, well-maintained, had plenty of traffic (for feeling safe), and some interesting things like overhead railroad bridges and a little tunnel. 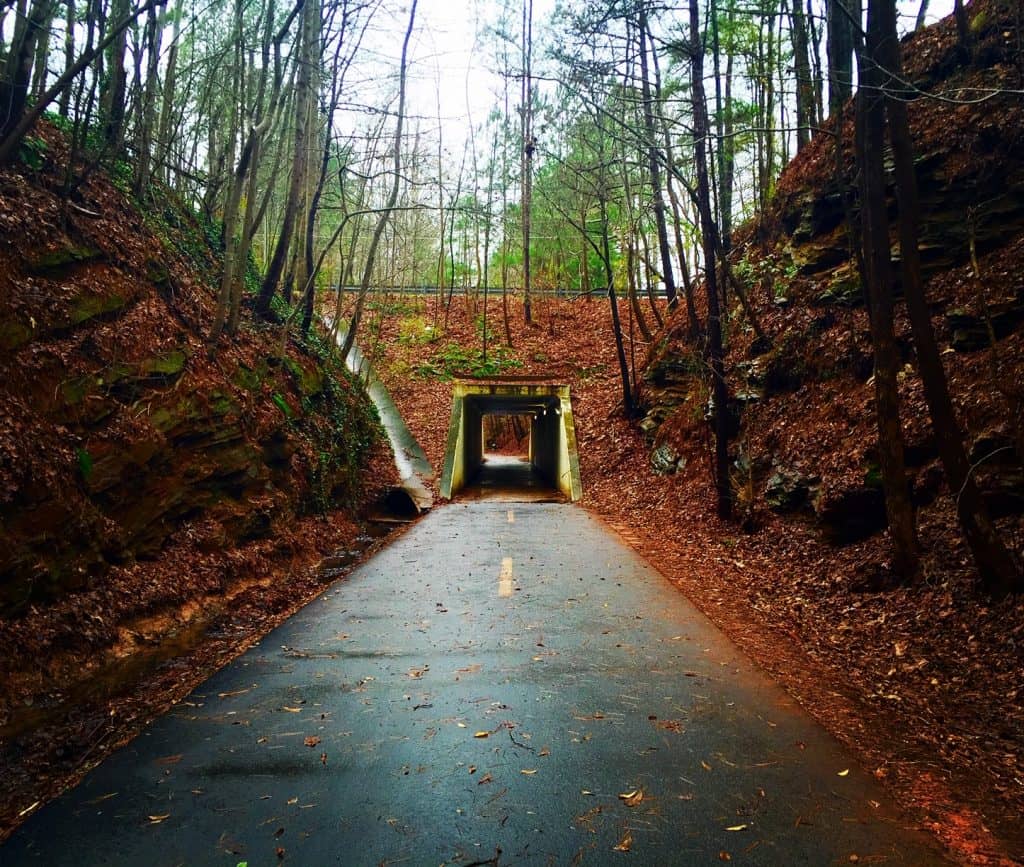 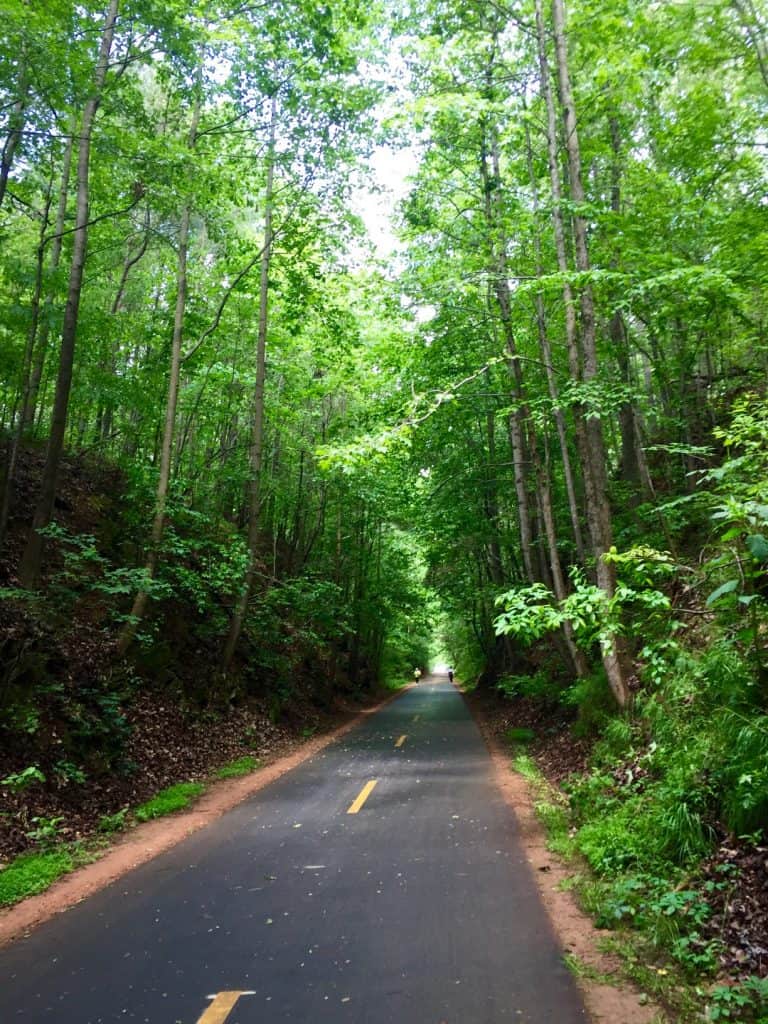 Due to its length, the Silver Comet is very popular with cyclists, so just be aware of your surroundings and don’t take up the whole road—only one lane at most.  They do come up SUPER fast and will come very close to you.

But it’s still a great Atlanta trail for dogs, kids, roller bladers, runners, walkers, and more!  You can get more details on the whole length of the trail here.

I don’t have pics of this one and didn’t do it as often (it’s easier to get lost, not well signposted), but this 3.4-mile trail has an awesome river view from above, whitewater rapids, cool dark forest paths, and more.  It’s a dirt path and somewhat rugged in parts, so better for trail running or hiking—not for strollers, wheelchairs, or easy running.

This is part of the CRNRA, so you may need to pay $3 for parking (or like $35 for the year).  You can get more detailed info about the trail here.

Another I don’t have pics of, but this short trail has some cool aspects including a Civil War-era stone mill building.  The trail is only about 1.5 miles, and is pretty kid- and dog-friendly.  It’s also not as crowded as some other trails can be, and is part of the CRNRA (so you’ll pay a few bucks for parking).  You can learn more about the trail here.

Located right off the 285/75 interchange, I won’t say this is one of my *favorite* trails, but it does sometimes serve a purpose—it’s extensive and it’s flat.  I used to come here after my hip surgery when I was finally allowed to start walking, but had to have flat ground (and it was before I’d discovered the Silver Comet).

Cochran Shoals also has the benefit of being pretty crowded, so in the dawn/twilight hours there can feel like safety in numbers vs. some of the more secluded trails.  You also can’t beat the super-central location, and it now connects up with other trails in the area (like Bob Callan).  You can learn more about it here. 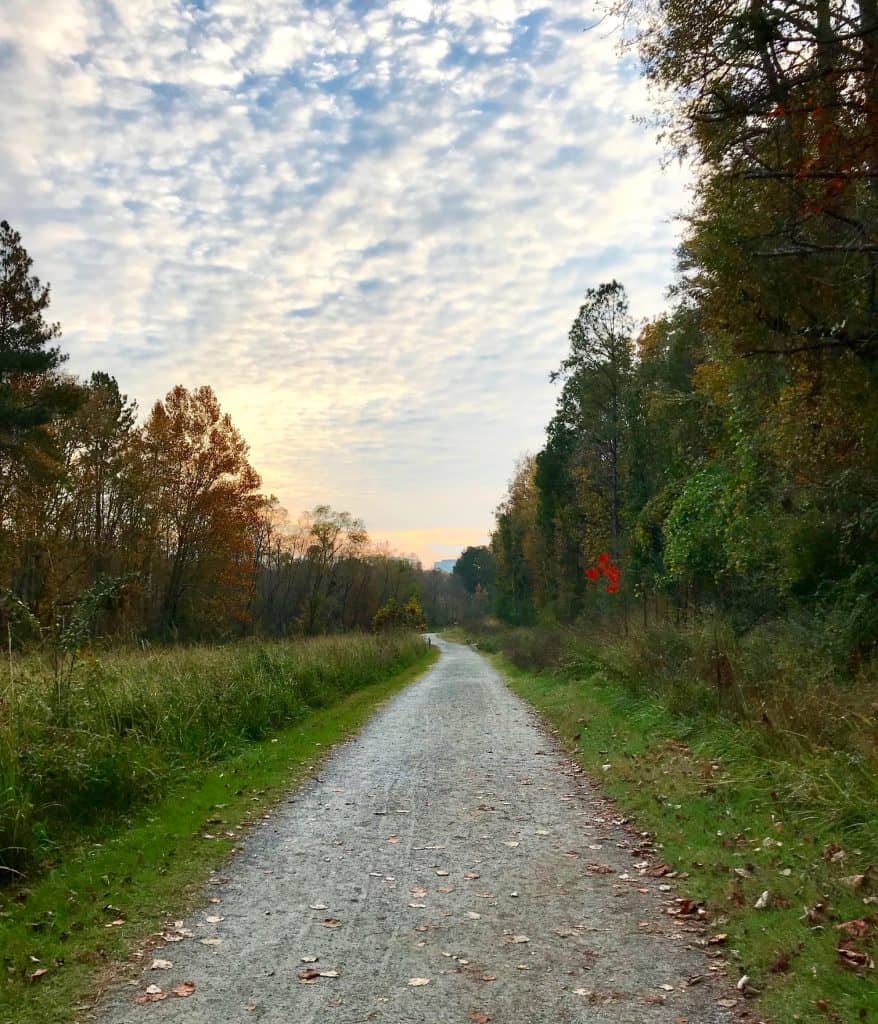 The insane thing is that this is really only scratching the surface of amazing Atlanta trails.  These are definitely some of my favorite Atlanta running trails, but if you are willing to venture a bit further out into the ‘burbs, there are a lot of other great hiking options as well, and tons of waterfalls.  You’ll never run out of options in this cool city! 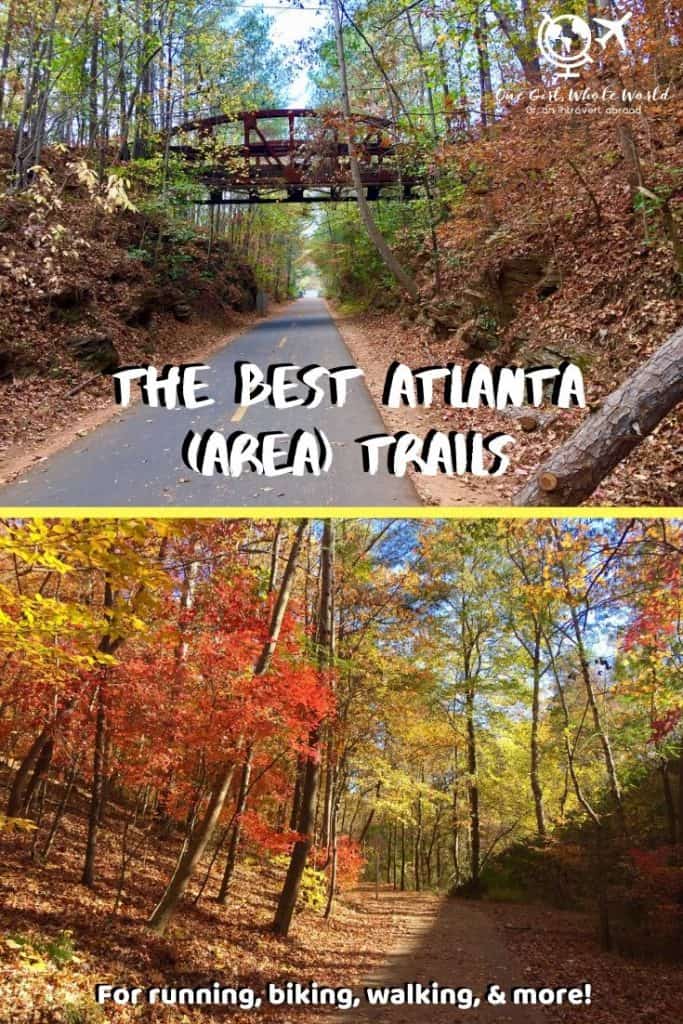 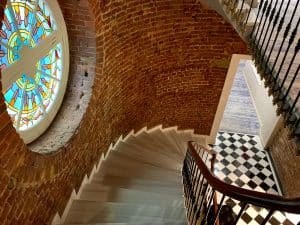 Where To Stay In Istanbul: Hotel DeCamondo Review 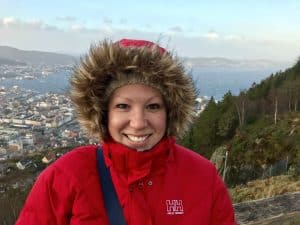 A Detailed Packing List For Bergen (Norway) In Winter