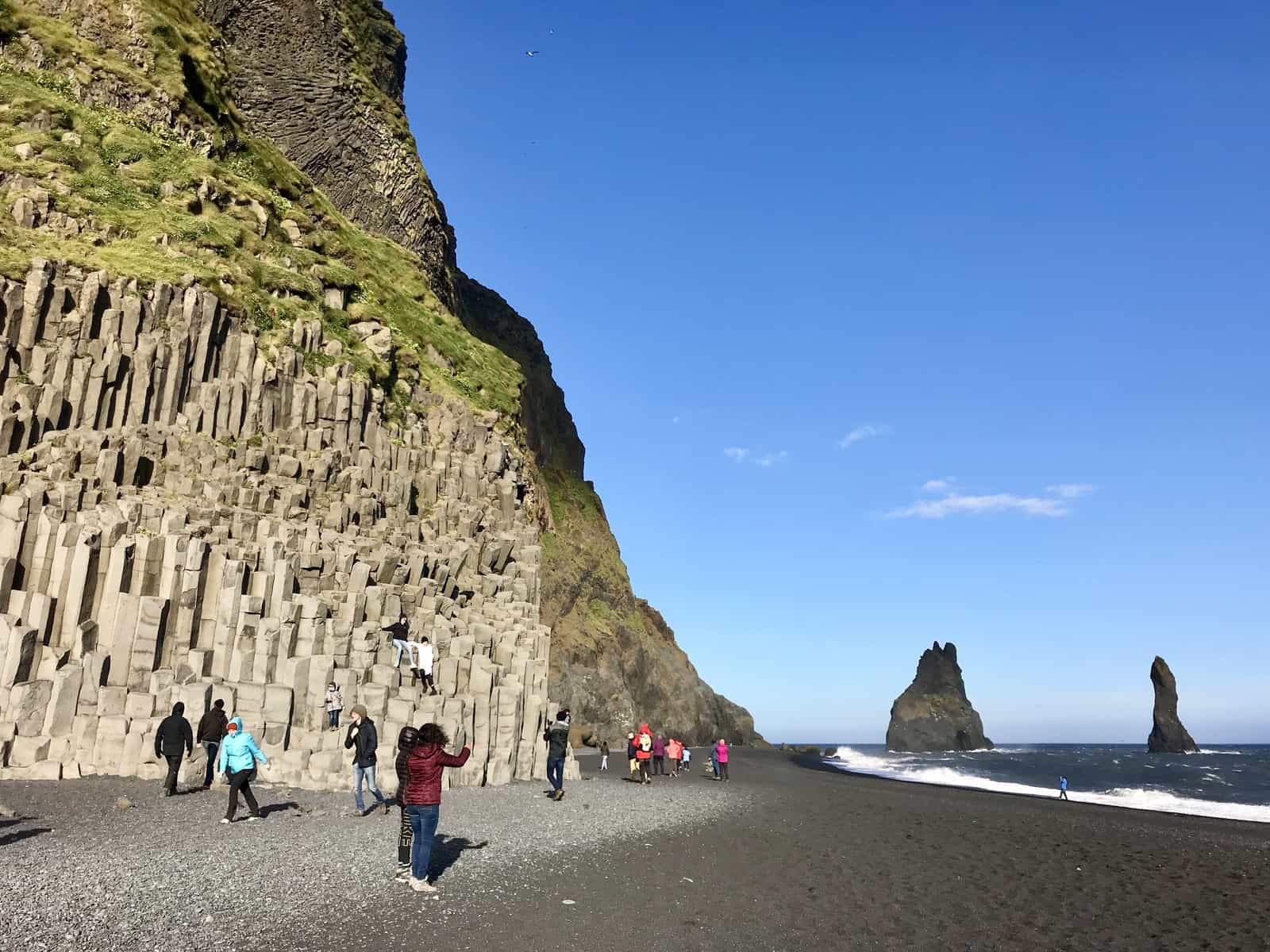 I’ve waxed rhapsodic about Iceland’s insane dramatic natural beauty.  So far we’ve talked about the waterfalls and glaciers, ice-strewn beaches and crater lakes.  But today we’re going to soak up the geometric wonder and wave-crashing beauty of the coast—Dyrhólaey Cliffs and Reynisfjara Beach!

While the famous Golden Circle route is amazing, I personally believe you’ll miss out on some of the best parts of Iceland if you stop there.  And since this is only a two-hour drive from Reykjavik, it’s still totally doable in a day trip if needed. 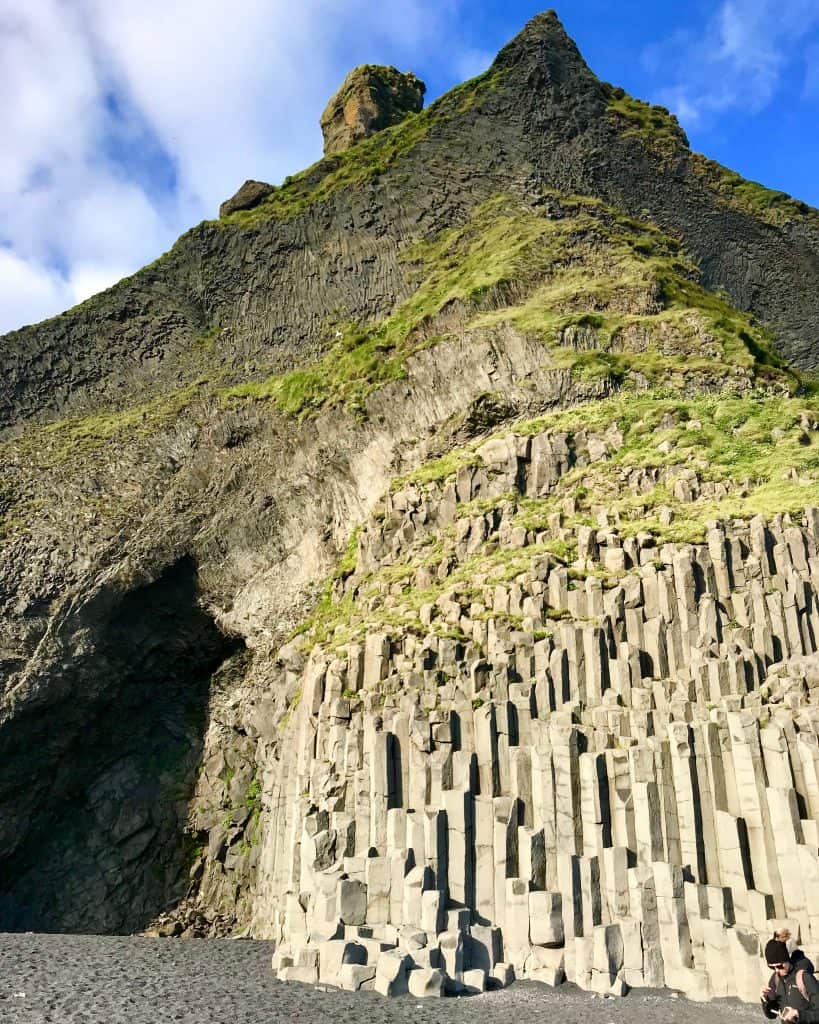 So…this is kind of confusing.  One of the things I had trouble with while I was researching the trip is whether these were three different things.  And while I’m still only like 92% sure, here’s what I know.

Here’s everything else from our 3-day Iceland road trip!

Falling in Love with Quirky Reykjavik

What to See On Iceland’s Golden Circle

A Stop At Iceland’s Powerful Skógafoss

Snorkeling Between Continents In Iceland at the Silfra Fissure

Why Kerid Crater Should be on Your Golden Circle Itinerary

And finally…What To Do In Iceland In Summer: Tips For A Midnight Sun Itinerary

Due to a 24-hour flight delay, I’d just arrived in Iceland that day and we had to condense the first two days of our planned road trip itinerary and move a few things around as well.

I’d picked up my friend in Reykjavik midday and we hit the road immediately, getting to experience Seljalandsfoss and Skógafoss before heading out toward Vik.  We had to skip Gullfoss and Geysir altogether and moved a visit to Thingvellir to our last day instead (to coincide with my Silfra snorkeling trip).  But all of those can easily be seen in 1-2 days!

It was starting to get late in the day, but we wanted to make sure we saw the views from the Dyrhólaey Cliffs before heading down to Vik proper.  To get there, you’ll drive up a super thin, winding, dicey road up the side of the mountain.

The biggest reason to come up here is that it gives you a great view over the surrounding countryside, the ocean, and down to famous Reynisfjara beach…it’s probably the most famous black sand beach in Iceland! 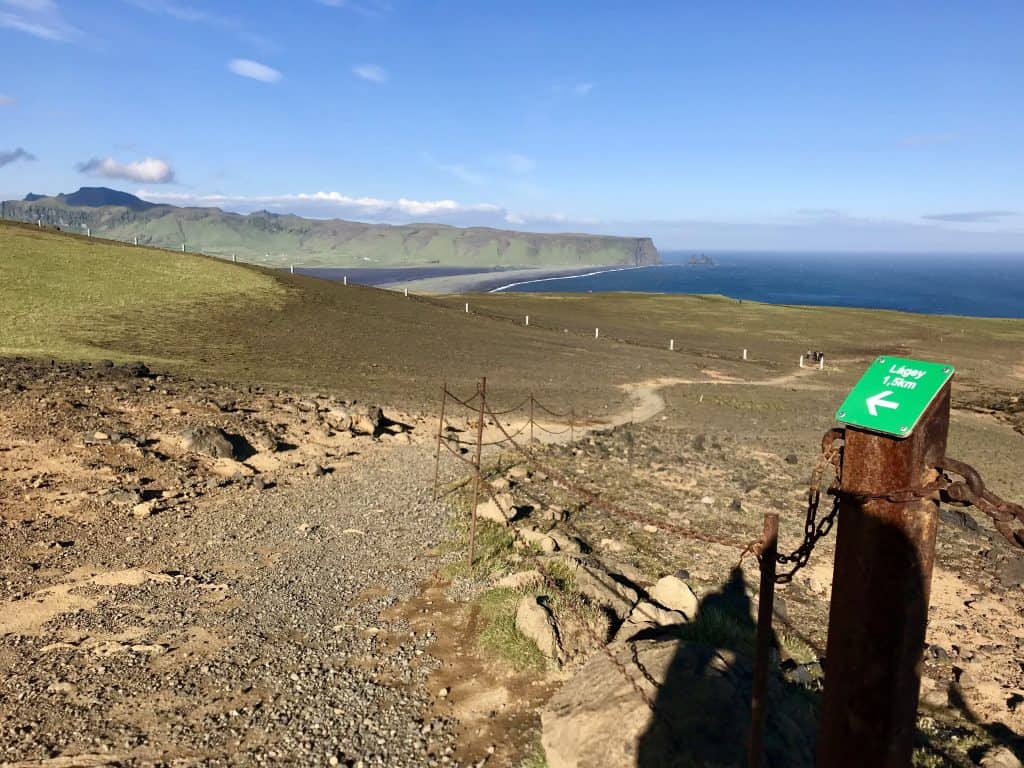 It was INSANELY windy, which made it bitterly cold, and my friend had to hold onto the railing just to stay upright—we could both barely walk! 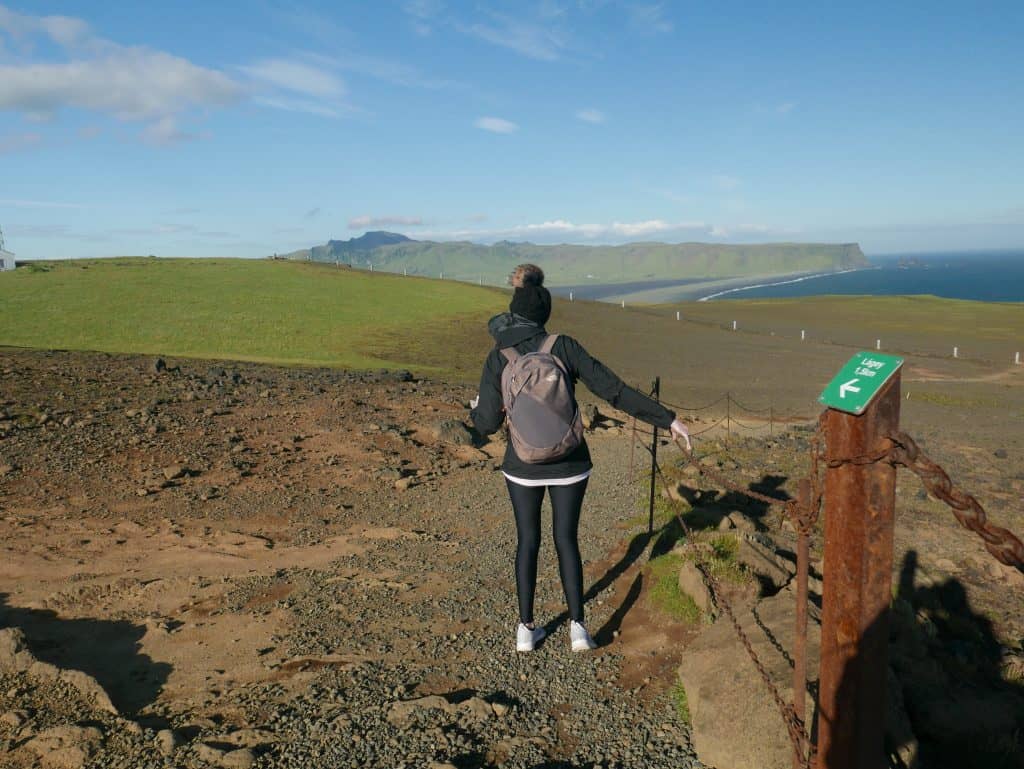 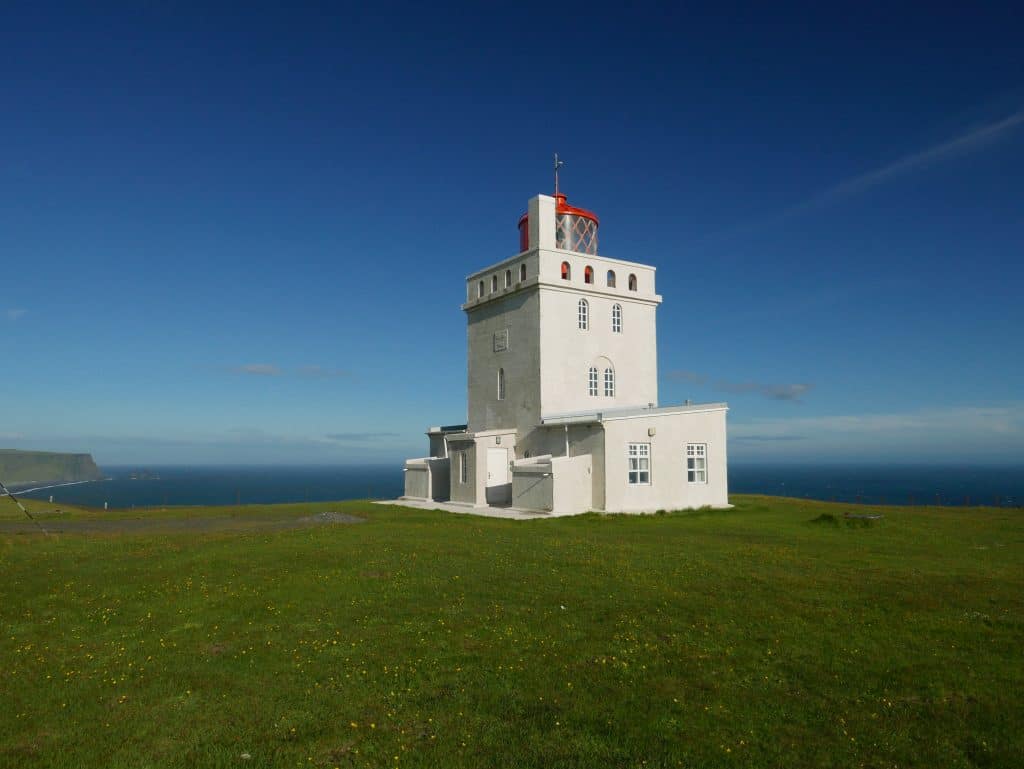 But you can’t fault the views…

I’m told that at certain times of the year you can see puffins up here (further up the cliffs), but we weren’t that lucky and didn’t have the time to go looking for them. 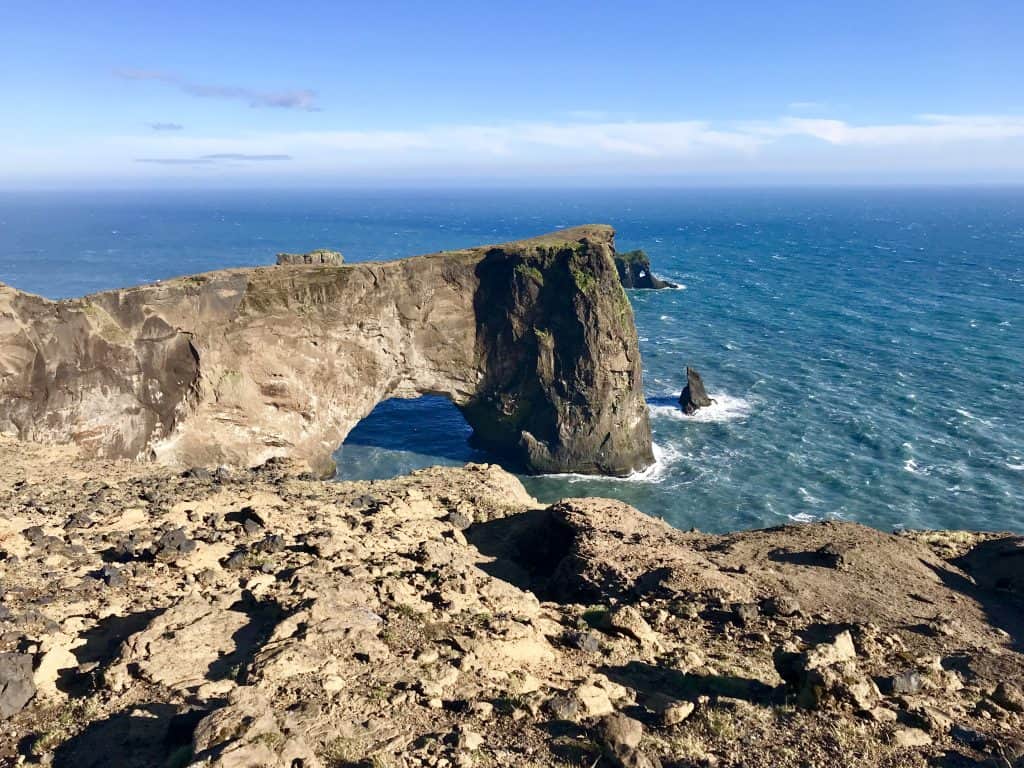 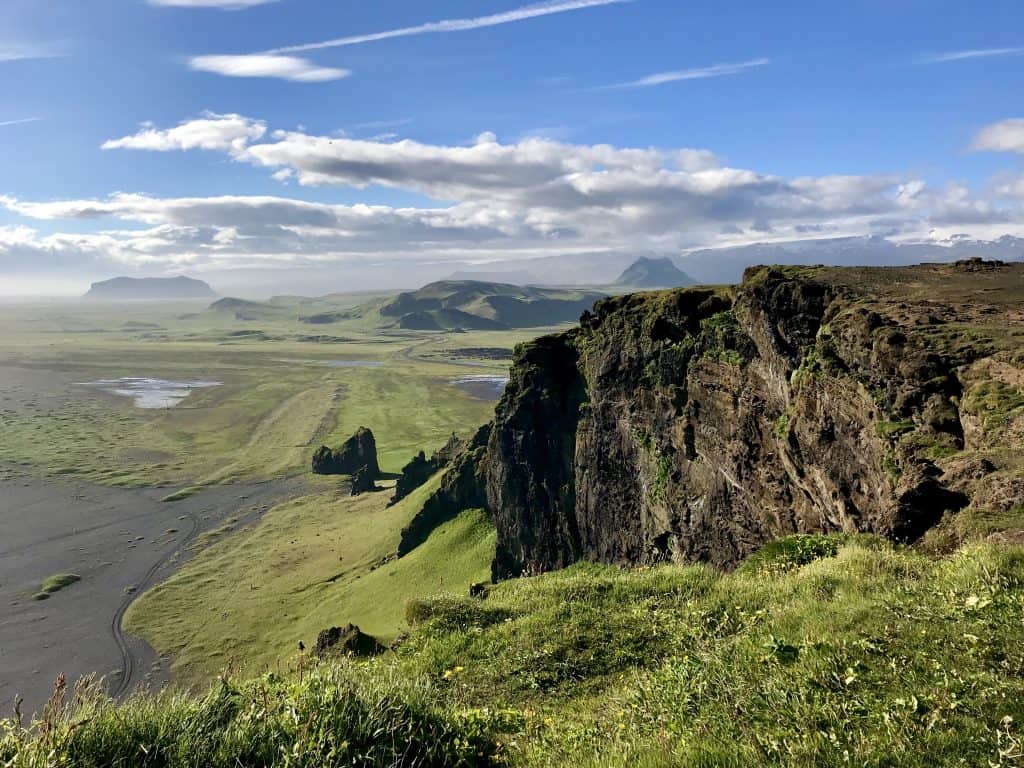 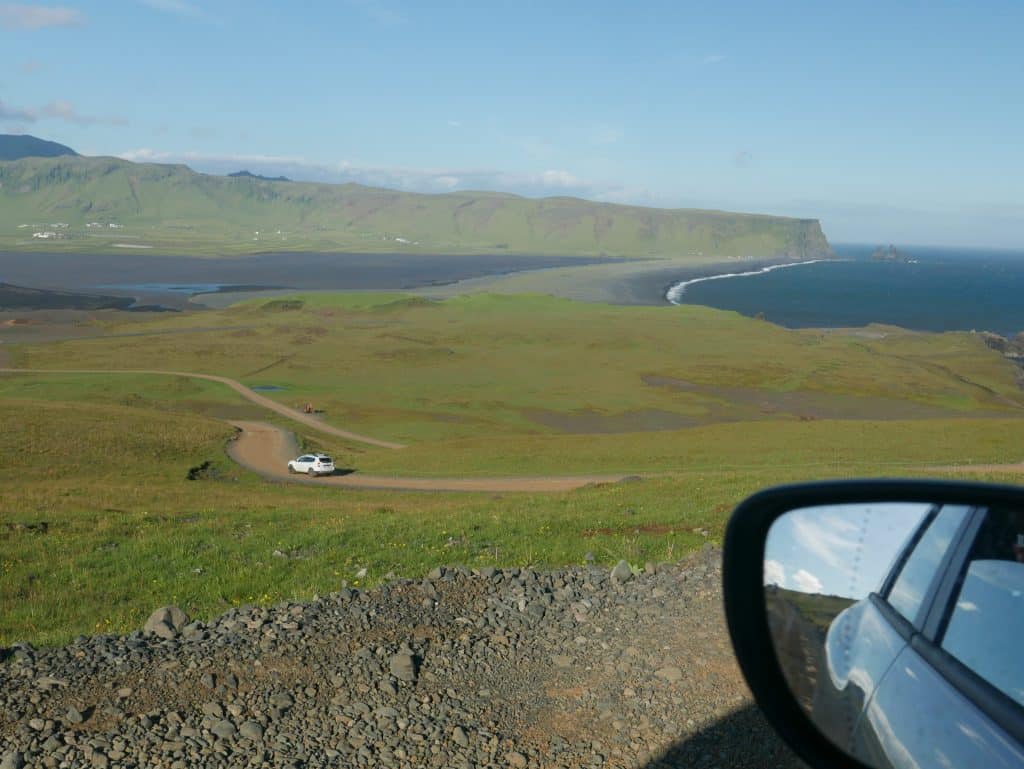 One quick “must-stop” is Vik’s church (Reyniskirkja).  First off, it’s adorable and photographs wonderfully.  But it plays a really interesting role in the town’s ongoing existence.

Vík is directly south of the Mýrdalsjökull glacier, which sits atop the Katla volcano.  It hasn’t erupted since 1918 (longer than usual), so many speculate that an eruption could happen any time.

If this happens, it could melt so much ice that a massive flash flood is triggered and wipes out the town, so the people of Vik (Vikians??) regularly practice drills where they rush to the church since it’s high on a hill and believed to survive a flood. 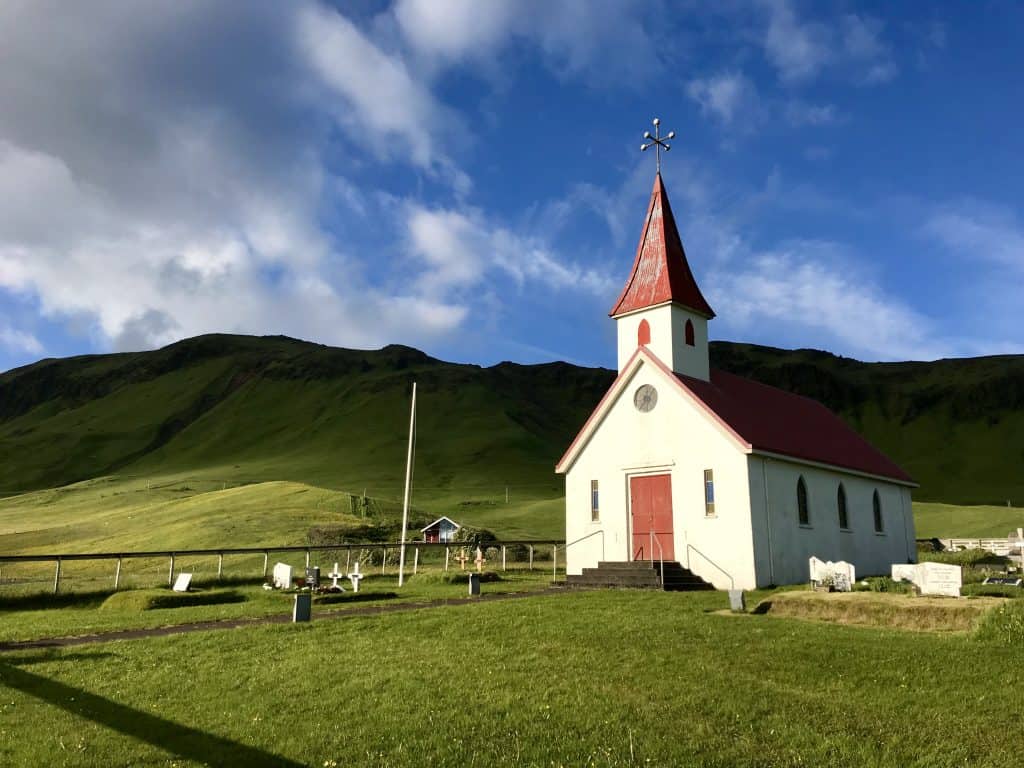 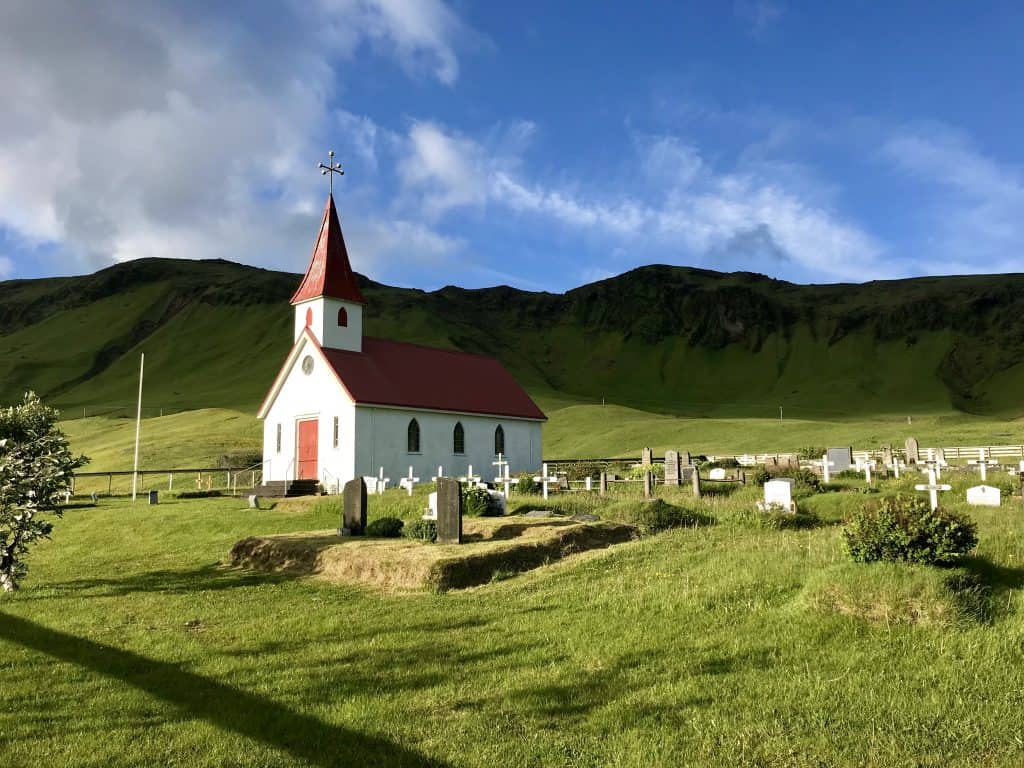 If you’ve seen pictures of Iceland, there’s a really good chance you’ve seen pics of this beach.  It’s famous for its black sand and phenomenal hexagonal rock formations, as well as the basalt columns out in the sea (Reynisdrangar), and is 100% worth a stop on your trip.

Even if you only have a couple days in Iceland, get out as far as Vik and then head back to Reykjavik. 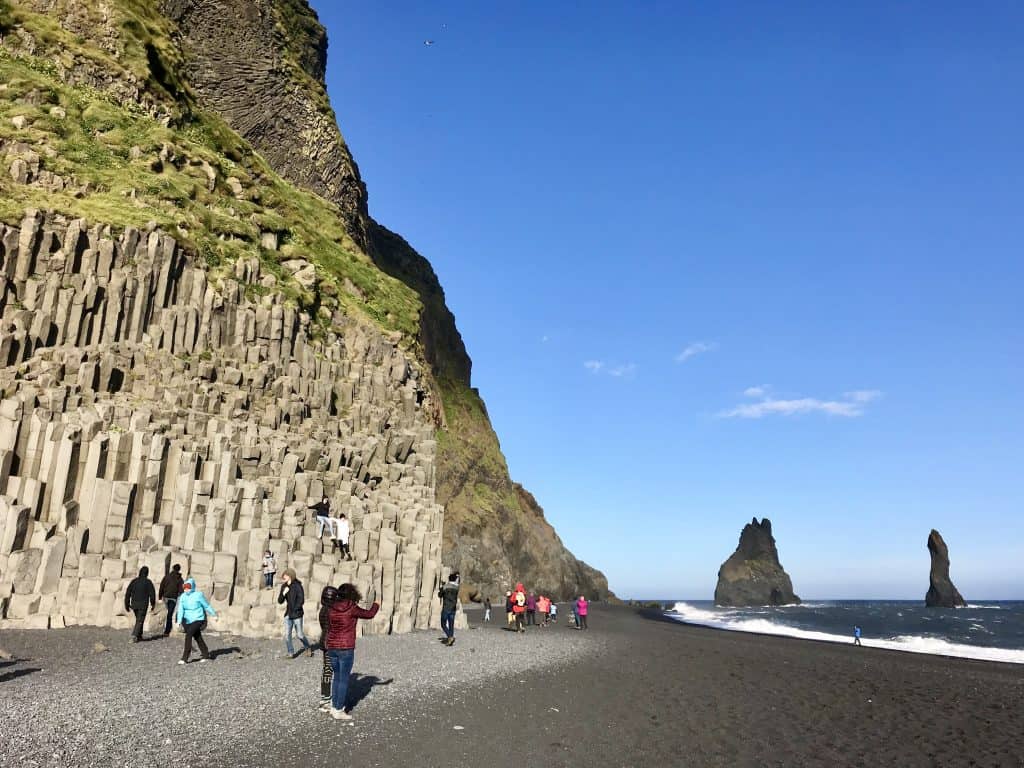 When you visit Reynisfjara, you’ll see a number of signs warning you about the dangerous waves.  When you stand on the beach and look out at the ocean, there’s no landmass between you and Antarctica.  YES YOU READ THAT RIGHT.  You’re basically at the top of the world and there’s nothing between you and the bottom of the world.

Because of that, the Atlantic “rollers” (they call them “sneaker waves”) can attack without warning, and with deadly consequences.  Always be super careful when you’re on the beach, and I don’t recommend turning your back on the ocean for more than a second or two—it’s not unheard of for tourists to lose their lives occasionally this way. 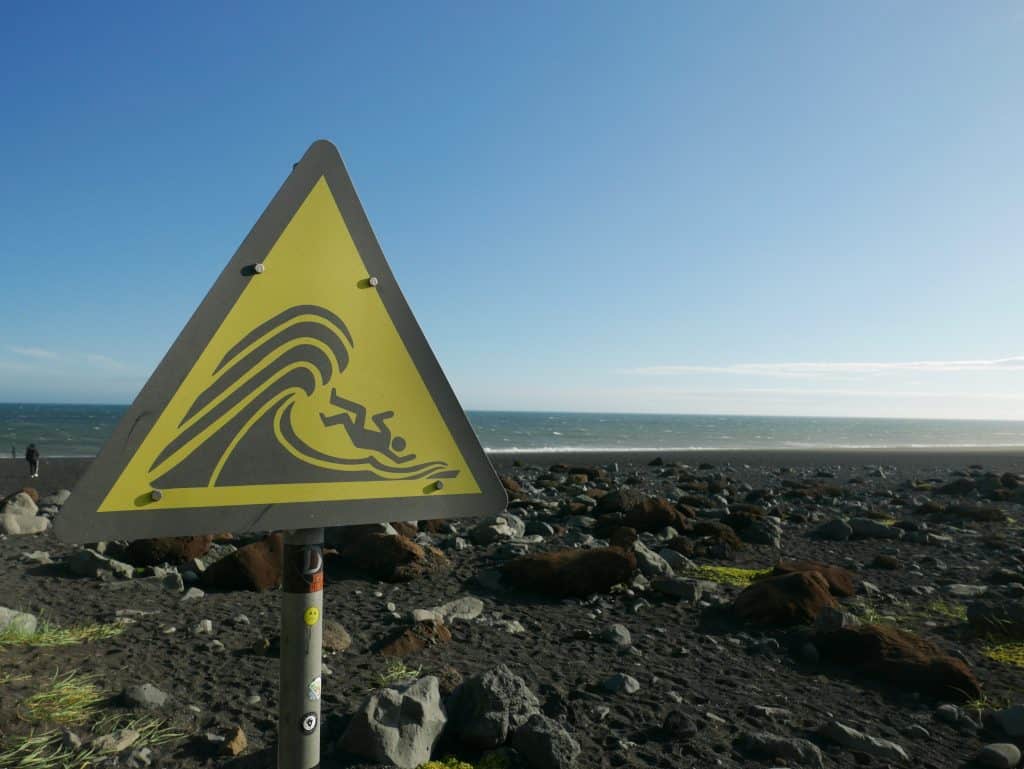 The black sand is very stark and dramatic, though slightly less dramatic on a sunny day…super moody on a cloudy one (here’s a pic for reference).  When it’s gloomy out, you definitely should try shooting in black & white.  We had such a glorious sunny day that I instead leaned heavily into the blues and greens. 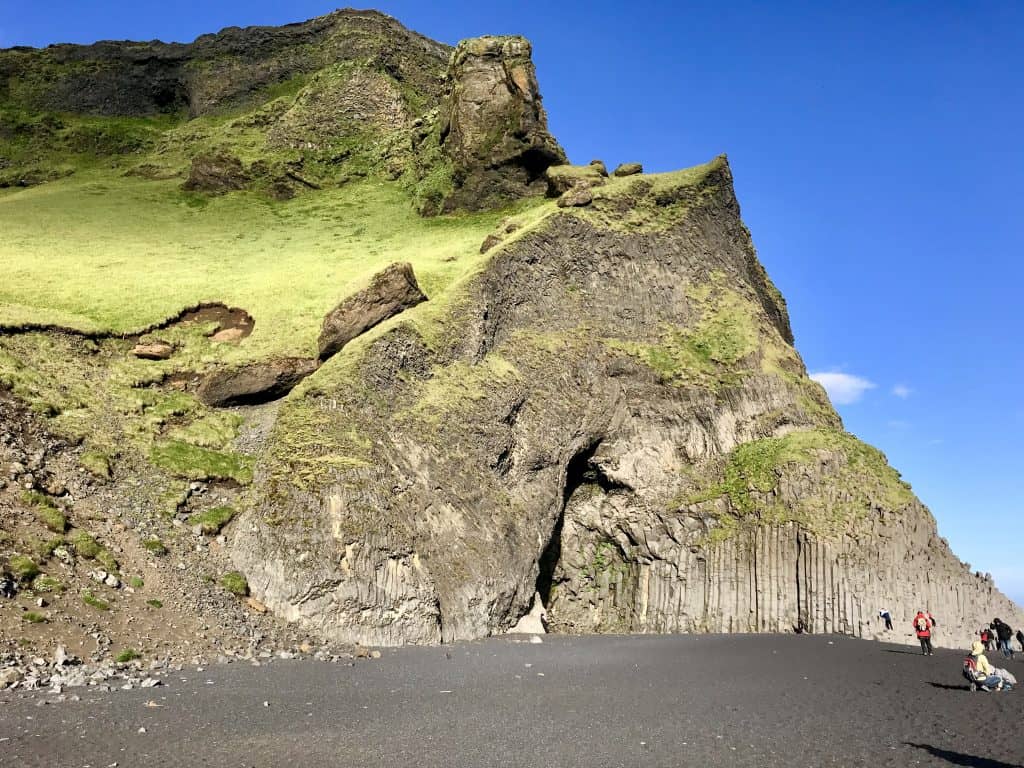 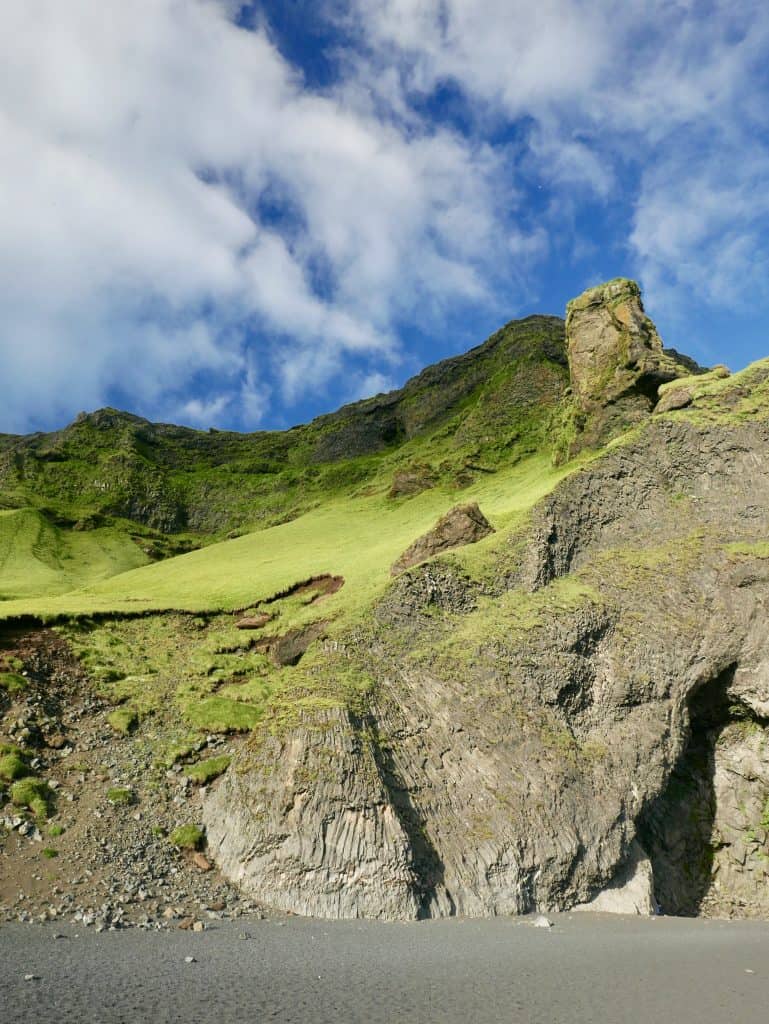 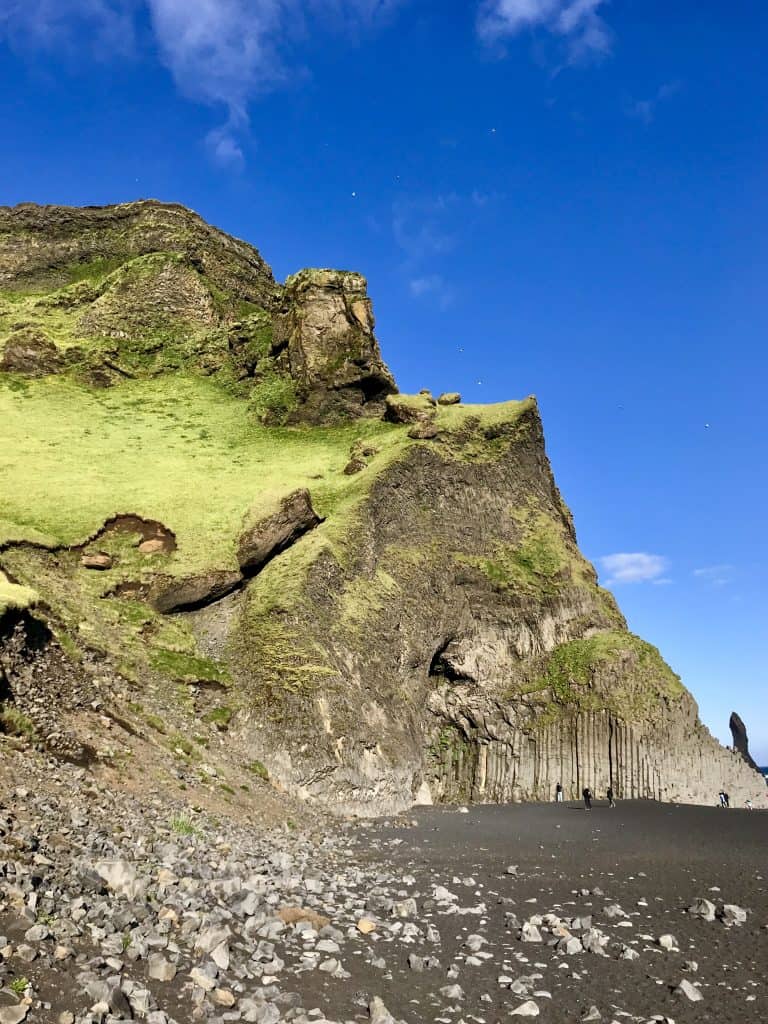 One thing you should know about Vik Beach and Reynisfjara (and honestly anything along the southern coast) is that it was SO windy!  You can see in the pic below that I was holding my own, but the people behind me are suuuuuper lean-y! 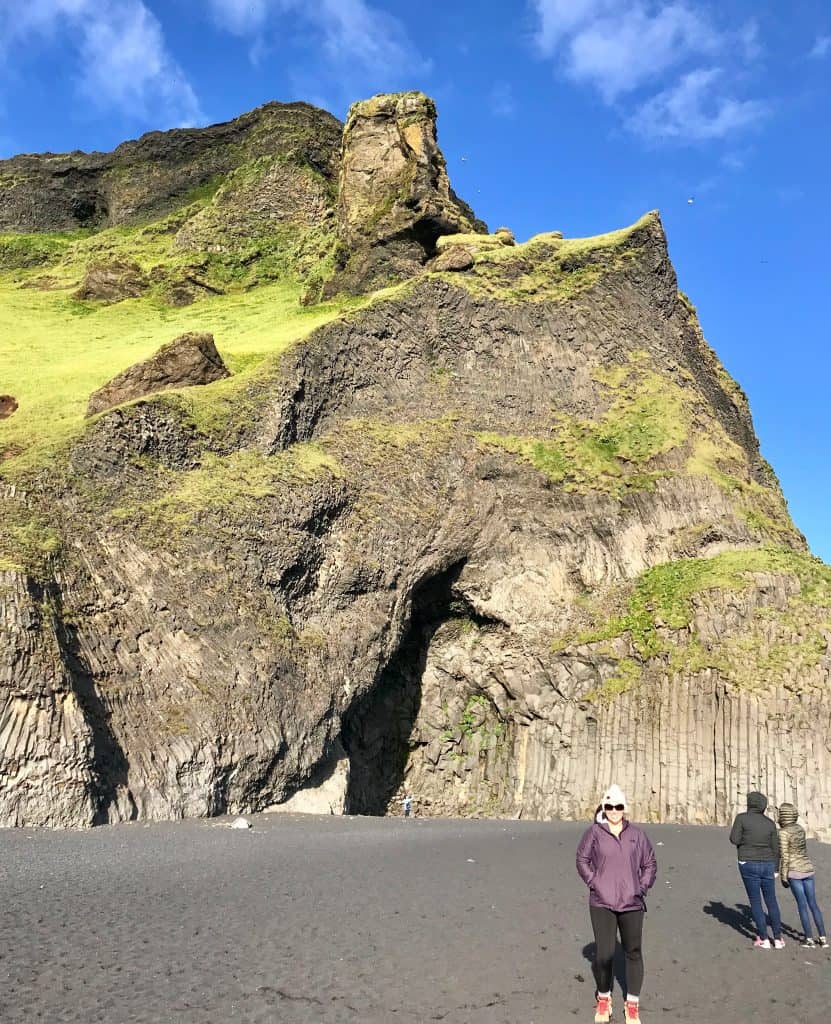 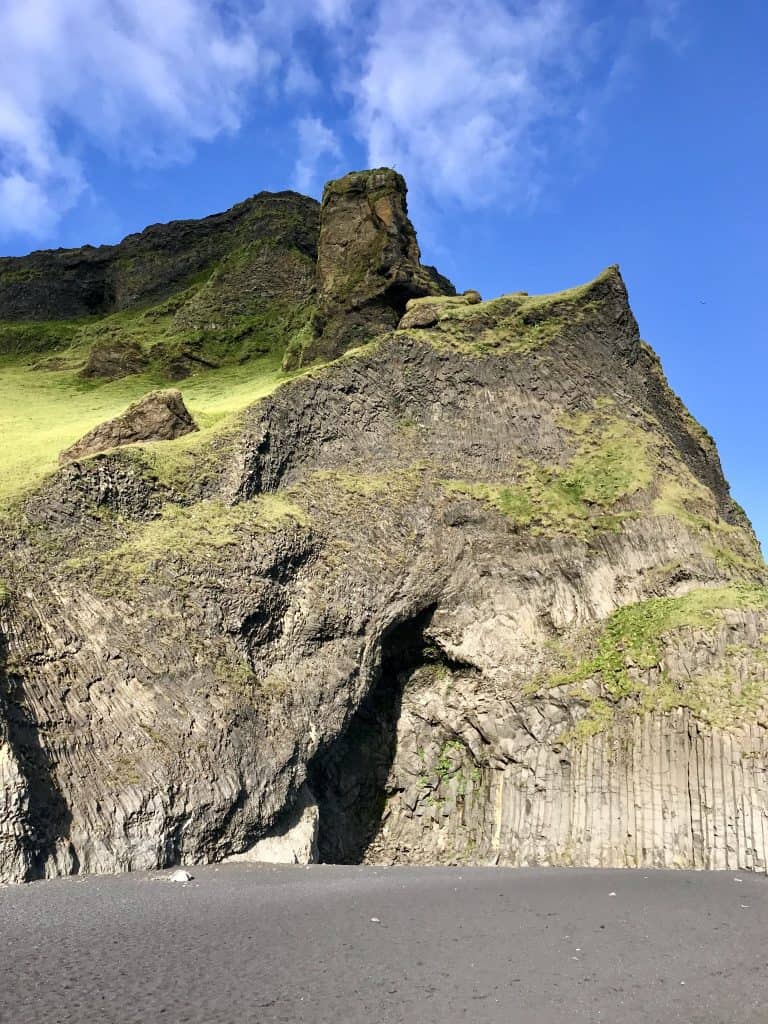 The cool columnar rocks are the same pattern found on the Isle of Staffa in Scotland, and they are always the COOLEST thing to experience.  It’s just unreal, one of nature’s neatest magic tricks. 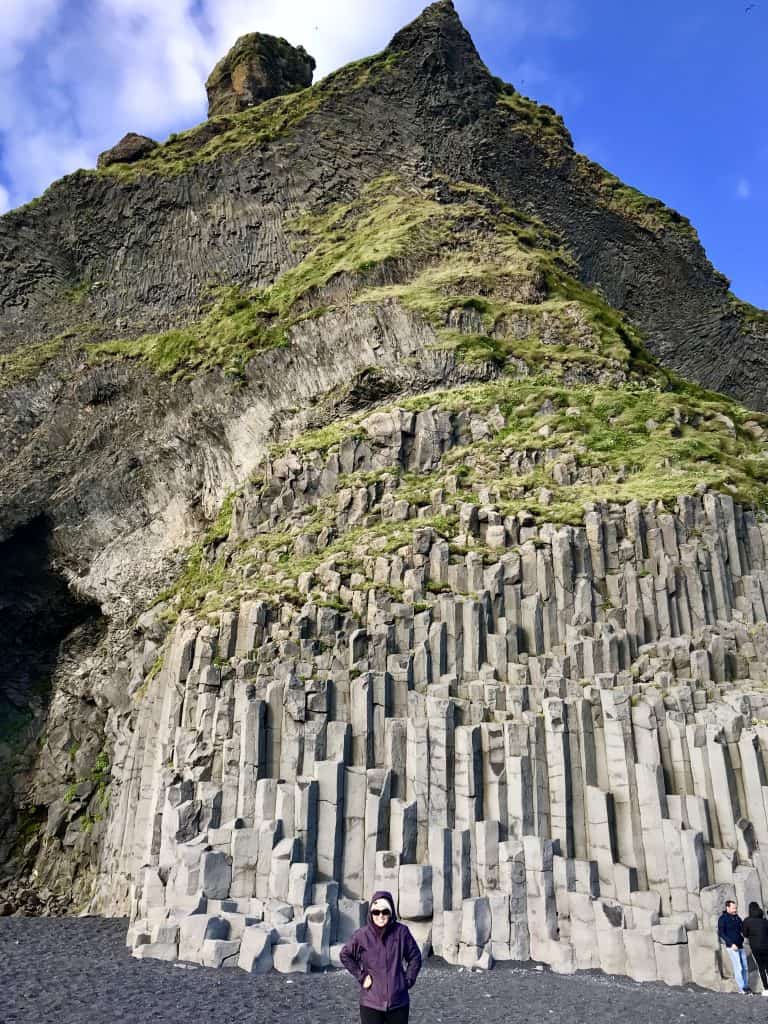 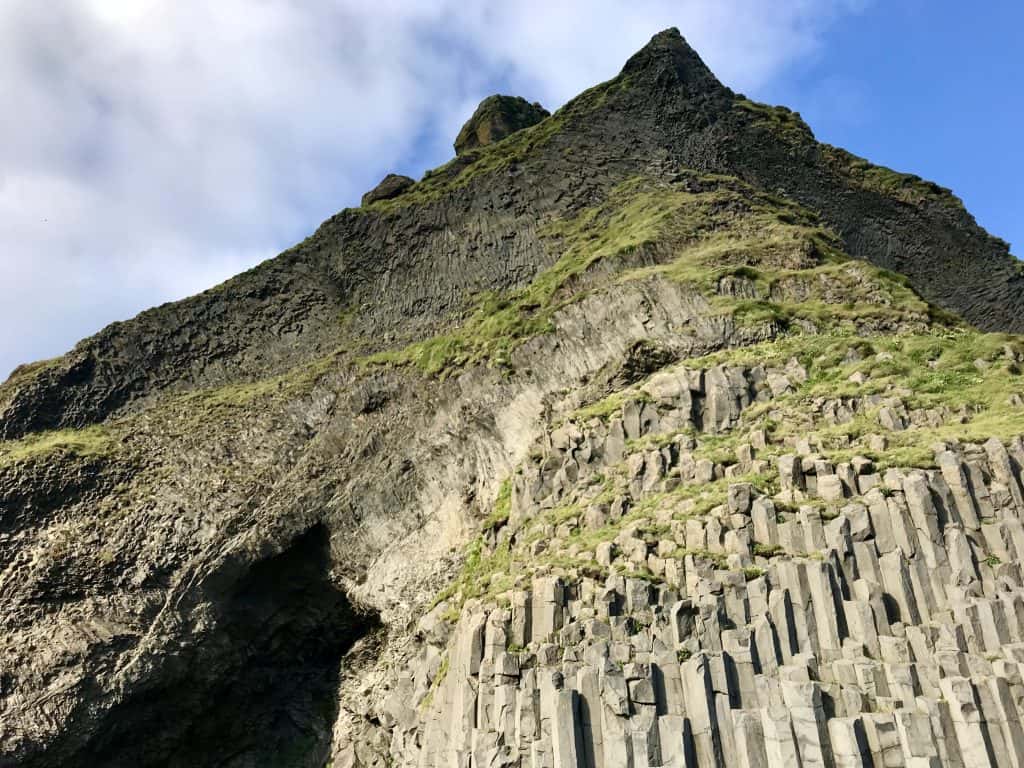 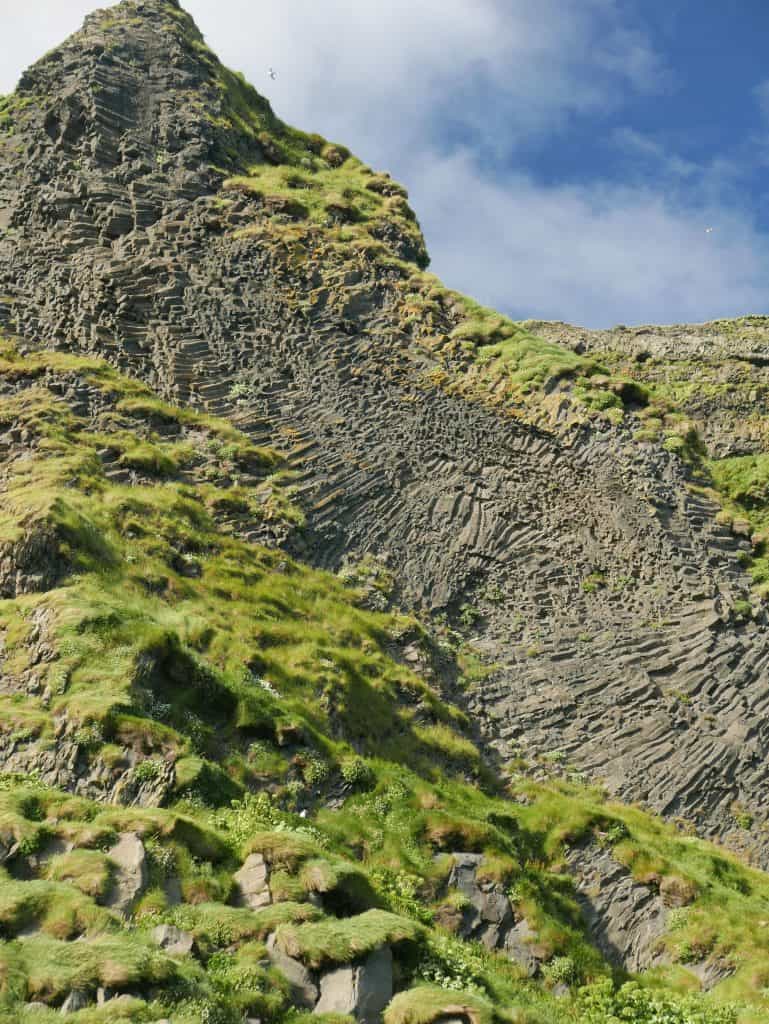 This pic kind of gives you an idea of how big each of those hexagon columns are that make up the crazy pattern.

You can get up close and personal with them on the beach (keep an eye on those waves!!!) and then when you round the corner there’s a little cave made up entirely of the columns…so it’s like jaggedy teeth all around you. 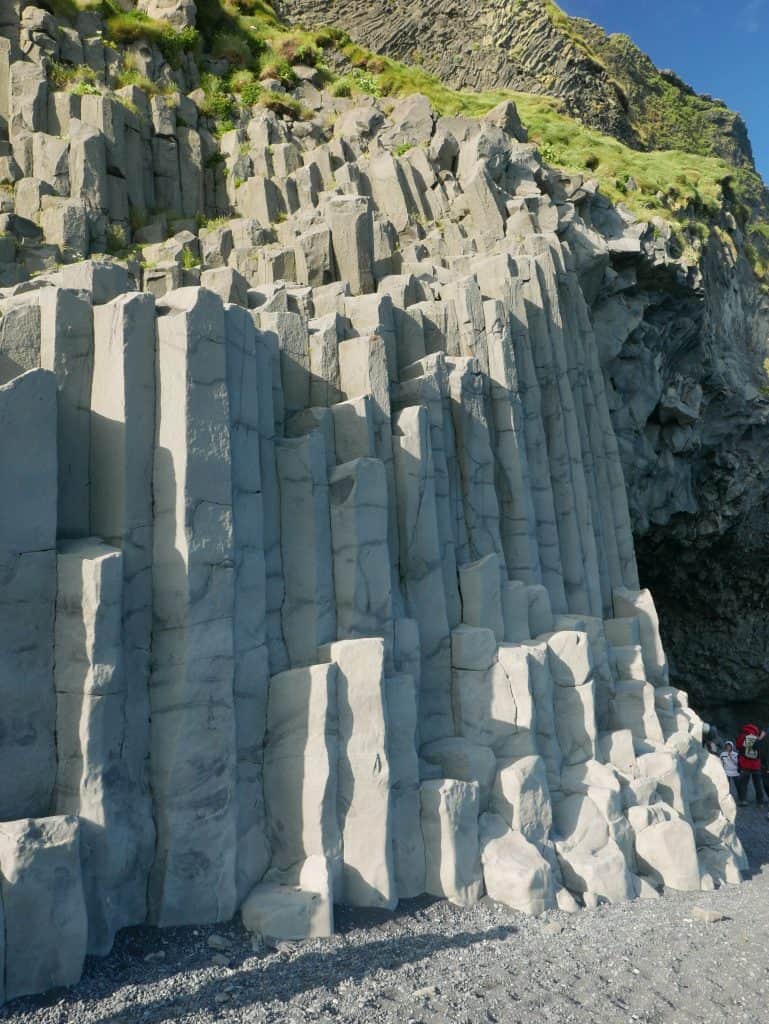 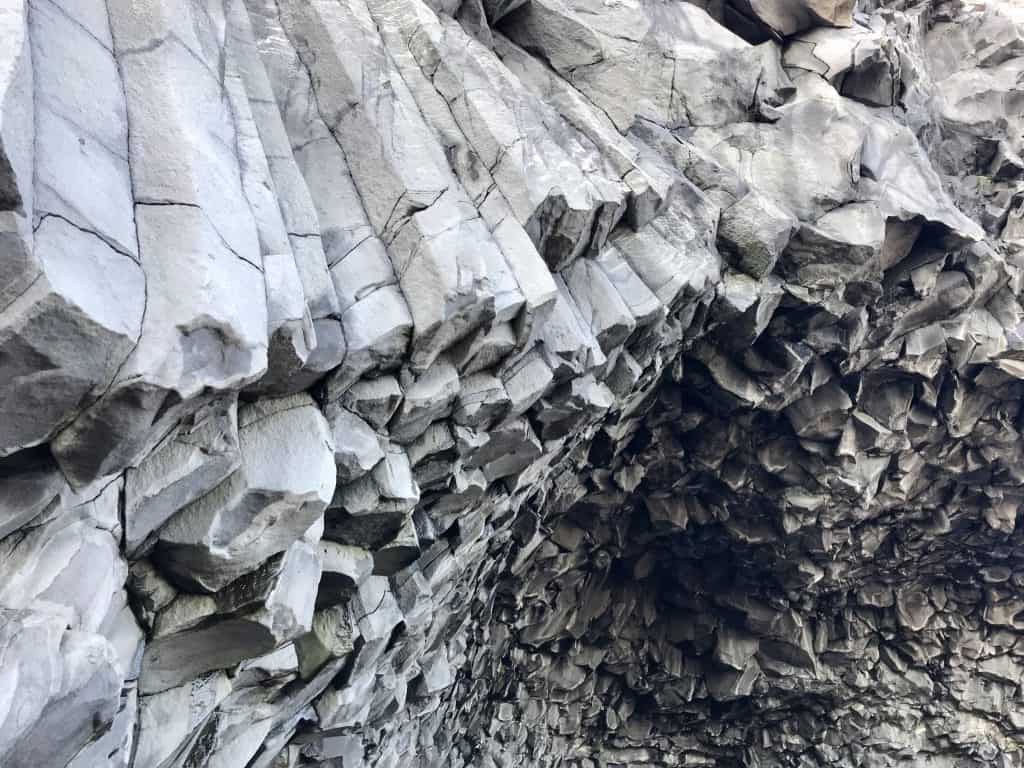 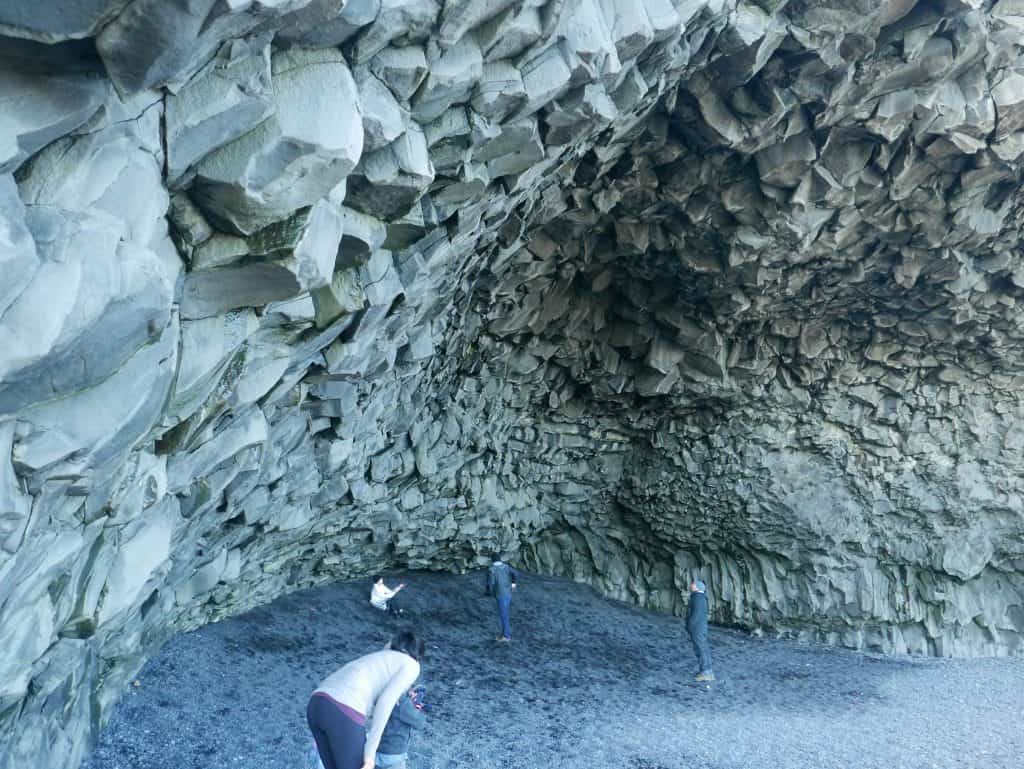 This doesn’t need to be a super long stop on your Iceland road trip, but even if you have 20-30 minutes Reynisfjara Beach (or Vik Beach or the “black sand beach in Iceland”) absolutely has to be on your itinerary. 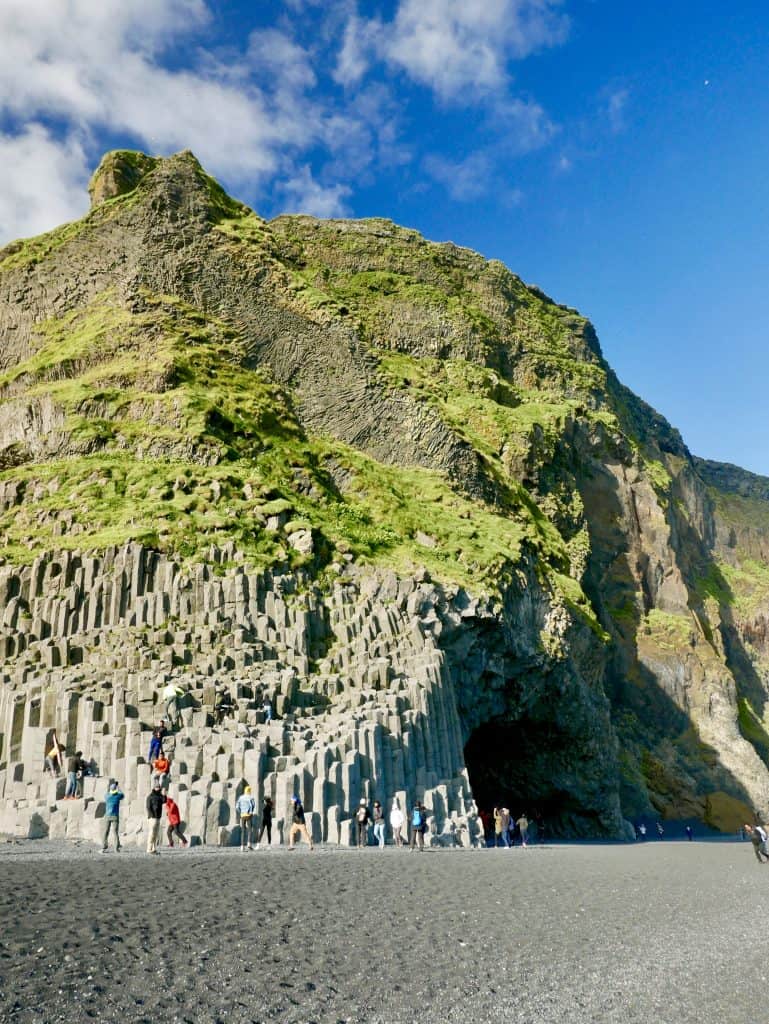 You might also like:  Why A Neck Gaiter Is a Winter Travel Must-Have (& The Best One To Get)

Where to eat in Vik

We were windblown and cold, and still had an hour’s drive out to our hotel for the night.  We sought out dinner in Vik since everything would be closed near our hotel later, and ended up at Strondin.

The view is awesome (and on a nice day there’s a lovely patio), and while it was overpriced (what in Iceland isn’t?!), we had a great dinner.  I had plokkfiskur, which is kind of like fish mashed potatoes but way more delicious than it sounds. 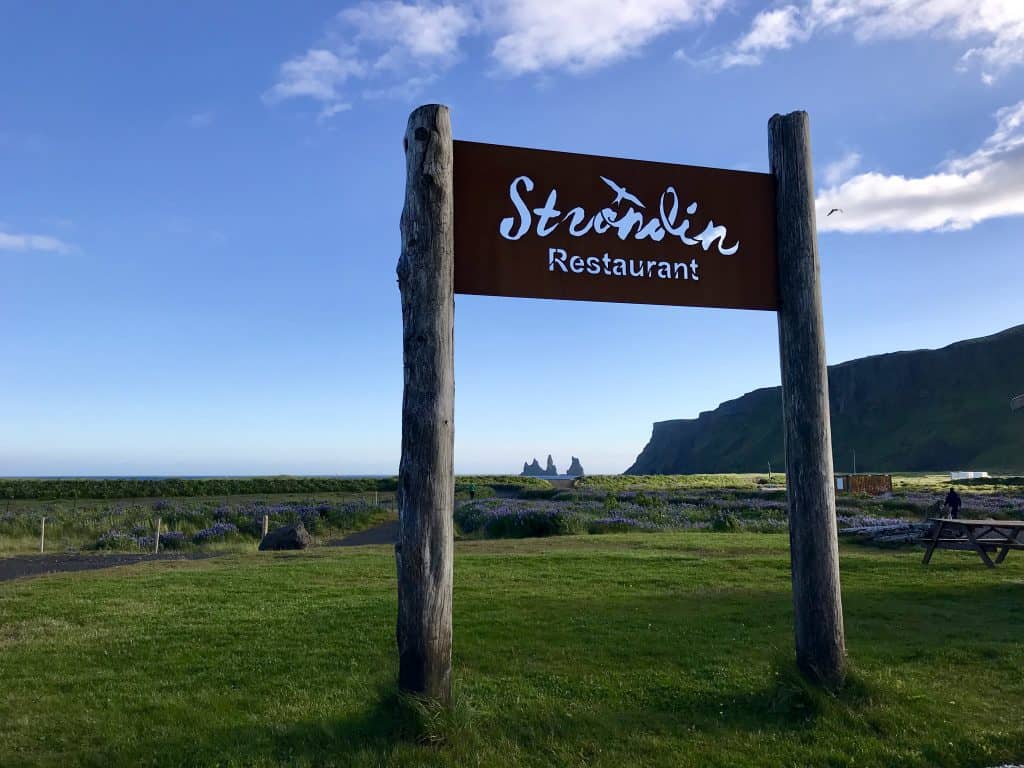 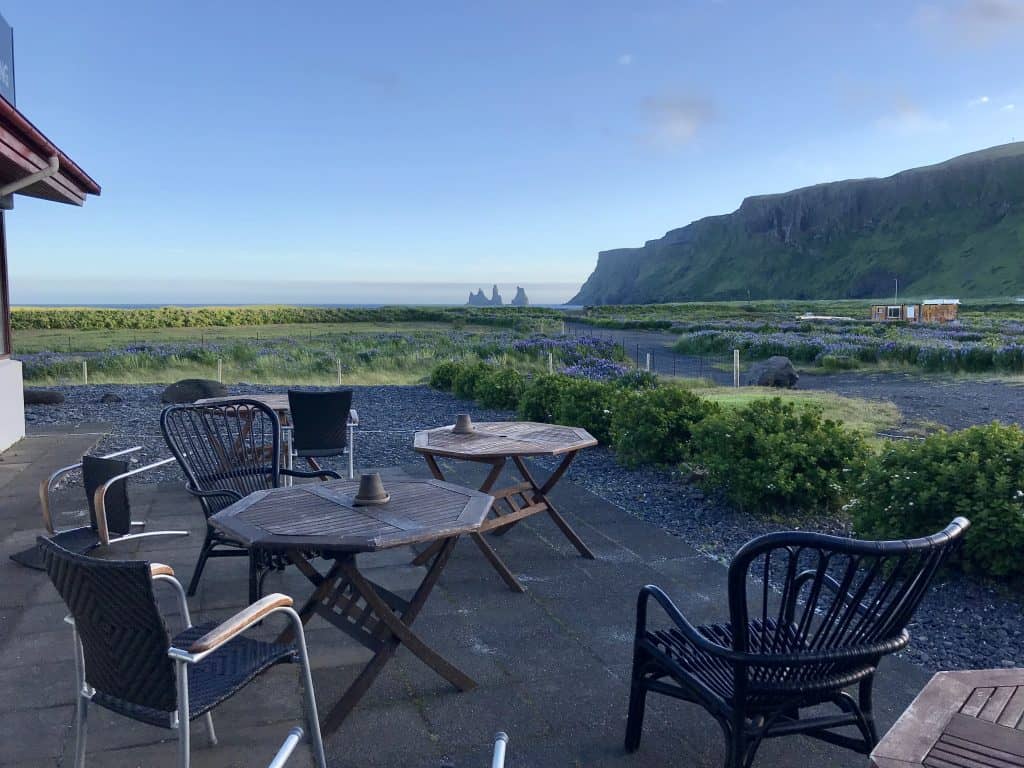 A few tips for planning a trip to Vik: 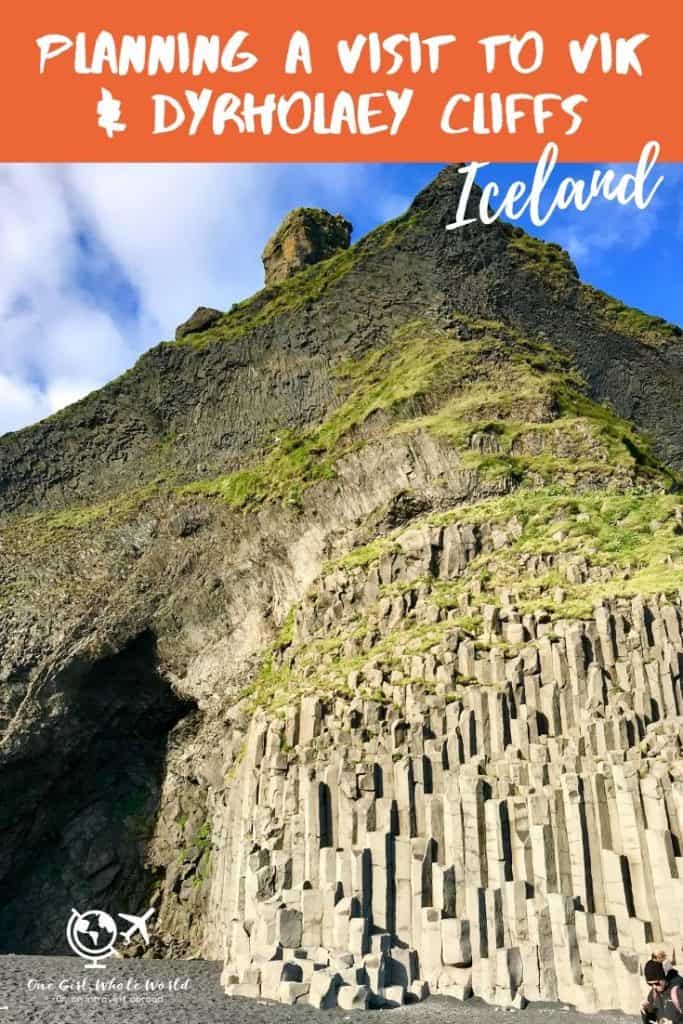 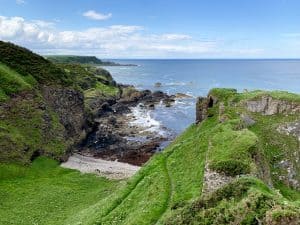 Discovering A Secret Scottish Castle Ruin On A Sea Cliff 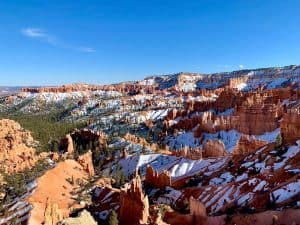