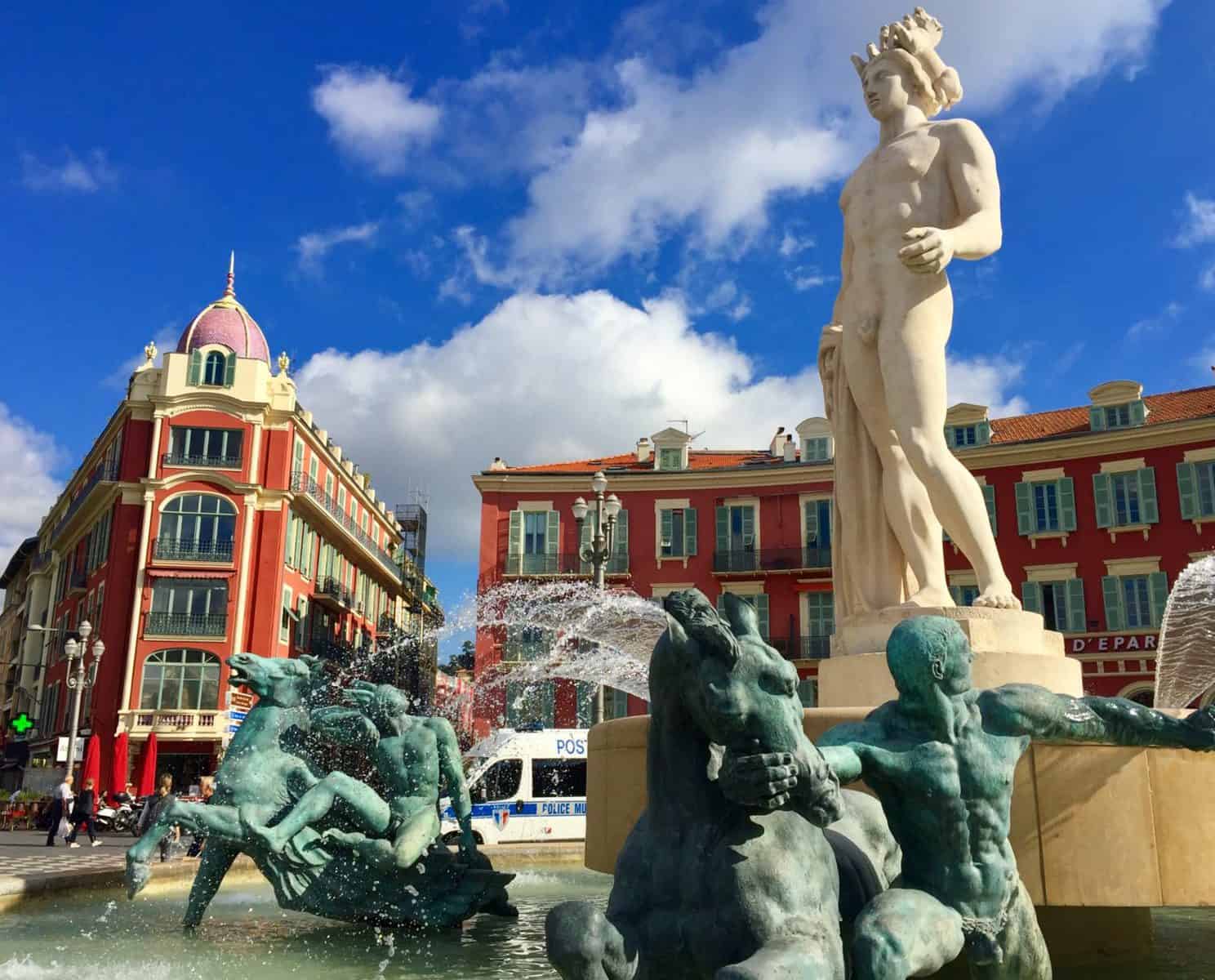 Even though we only had a few hours in Nice, we have pastries, beaches, AND a scandalous statue.

So…very, very French in other words.

We were staying in Roquebrune-surs-Argens, an adorable little town in southern France near the coast.  It was the perfect place to base ourselves, since it was less than an hour’s drive from dozens of cute, sophisticated, historic, and/or gorgeous towns along the coast.

And then there’s Nice, France—the hub of the south (gateway to Monaco as well), the second-largest city in the region.  But for all that, Nice feels small and approachable. 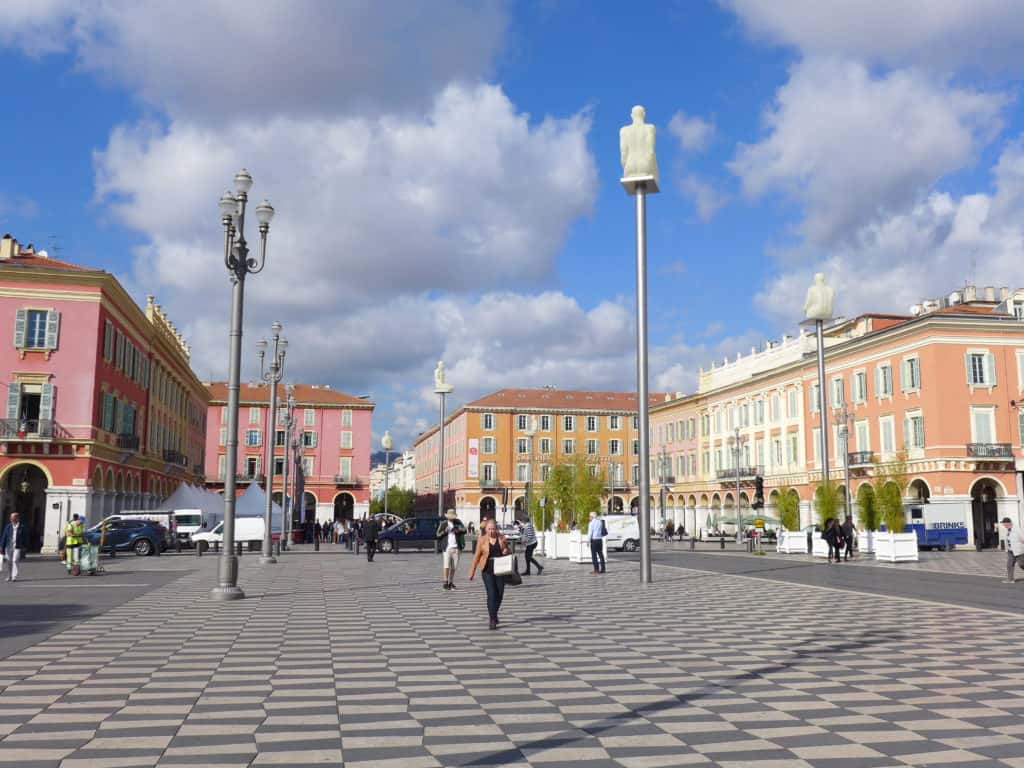 So we decided to explore the city one fine afternoon.  We took off after lunch, driving the 45 minutes and using Google Maps to try and get as close to the beach as possible, then just followed signs for public parking.

When we emerged into a brilliant fall afternoon in Massena Square, the brightly colored buildings, checkerboard pavement, and interesting art installations combined into an arresting visual. 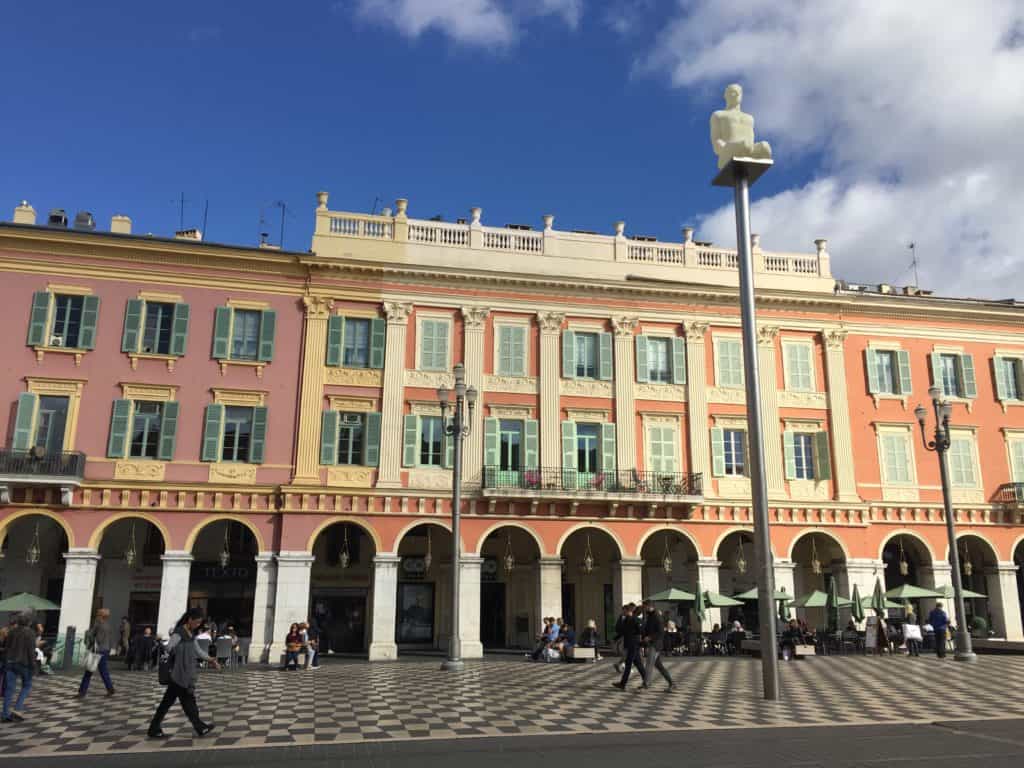 The seven statues (the men on poles) represent the seven continents and communication between different societies in today’s world—titled “Conversation à Nice”.  They sit at the geographic center of the city, Place Massena. 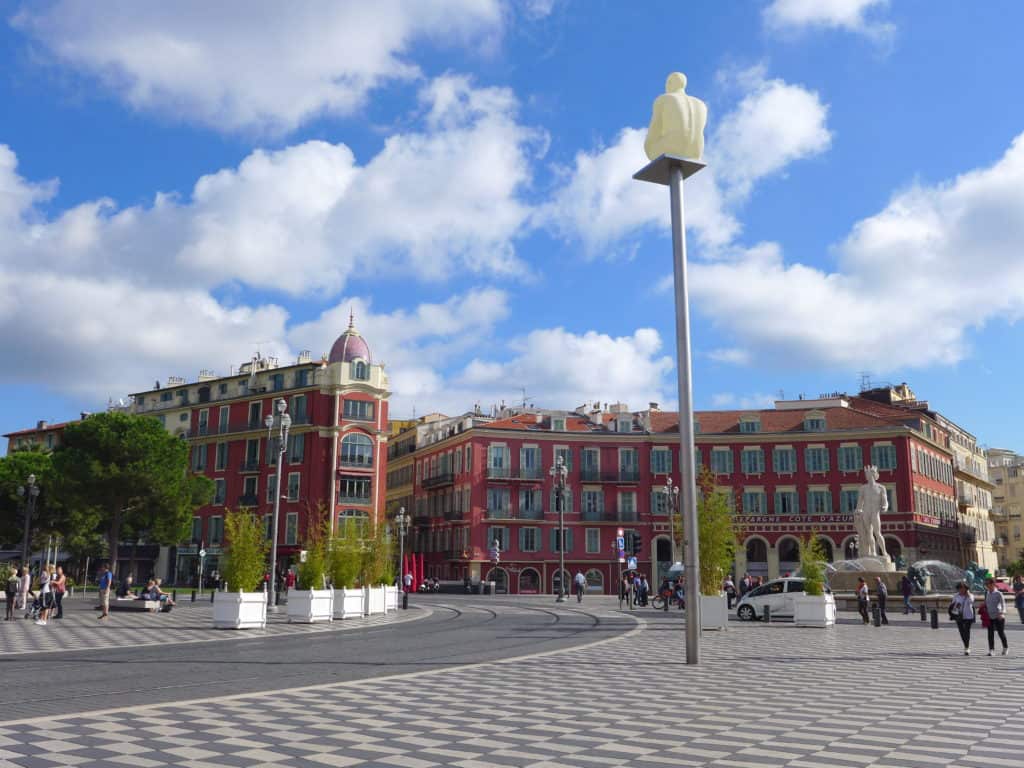 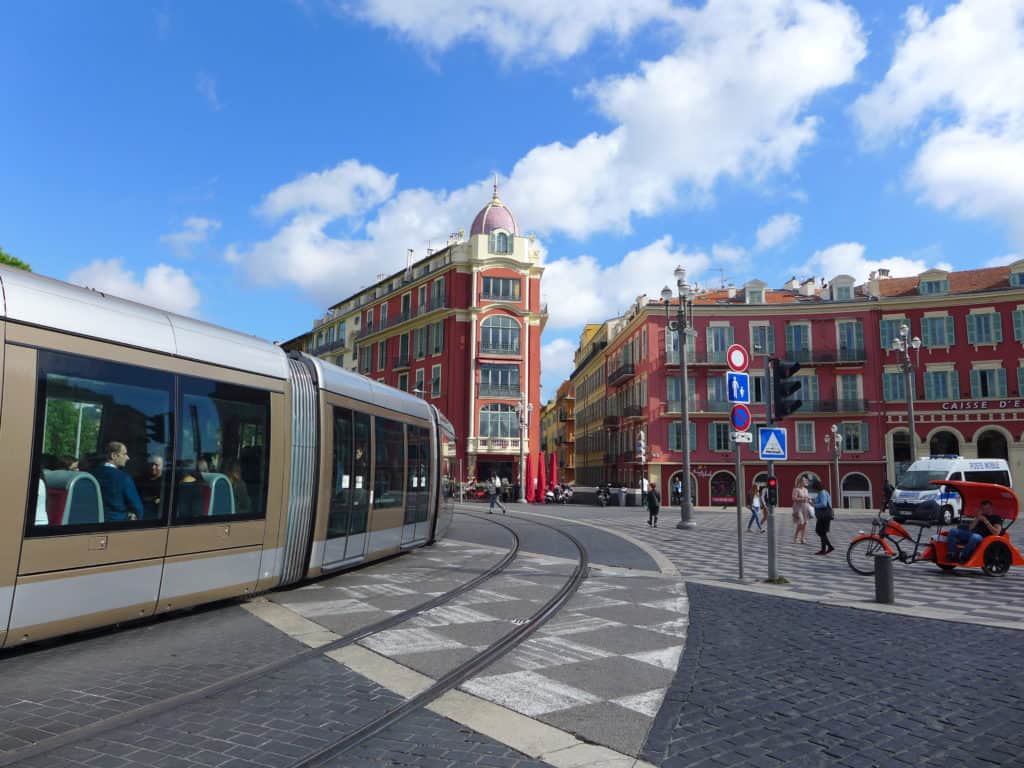 This guy is called the Fontaine du Soleil (Sun Fountain), and has a fairly entertaining history.  There’s the marble Apollo in the middle, and five bronze sculptures around him (picturing Earth, Saturn, Mars, Jupiter, and Venus).

It’s an impressive fountain, but the Niçois were not impressed when it was unveiled in the 1950s.  Apparently Apollo is missing his ever-present chariot…instead it’s symbolized by four horses on his head.  So they’ve nicknamed it the “4-horsepower”.

But it gets way better… 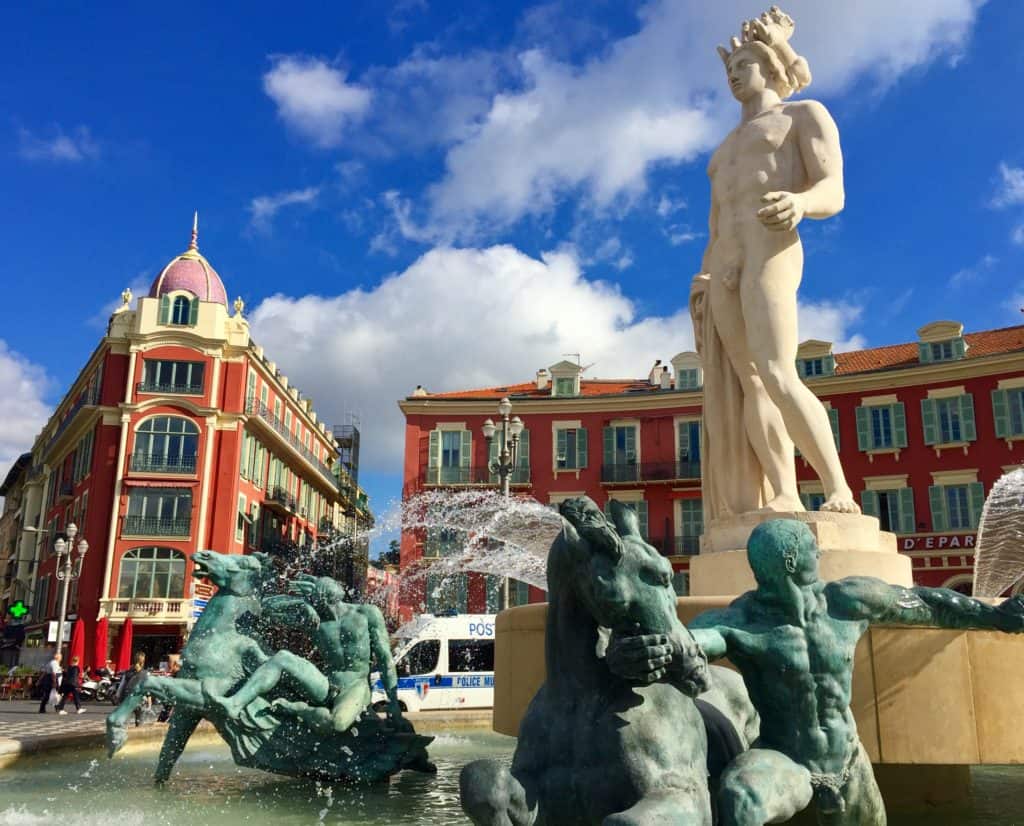 When the fountain made its debut, there was a lot of disagreement about whether his…ahem *manhood*…was too impressive.  Or too small.  And college students started decorating it as a prank.  So the sculptor went back and chiseled some of it off (sorry, dude) to try and satisfy the more conservative citizens.  And earning the statue a new nickname–“virgin”.

It still didn’t satisfy the people, so eventually the statues were banned and disassembled to keep from offending people, and only re-installed in 2011. 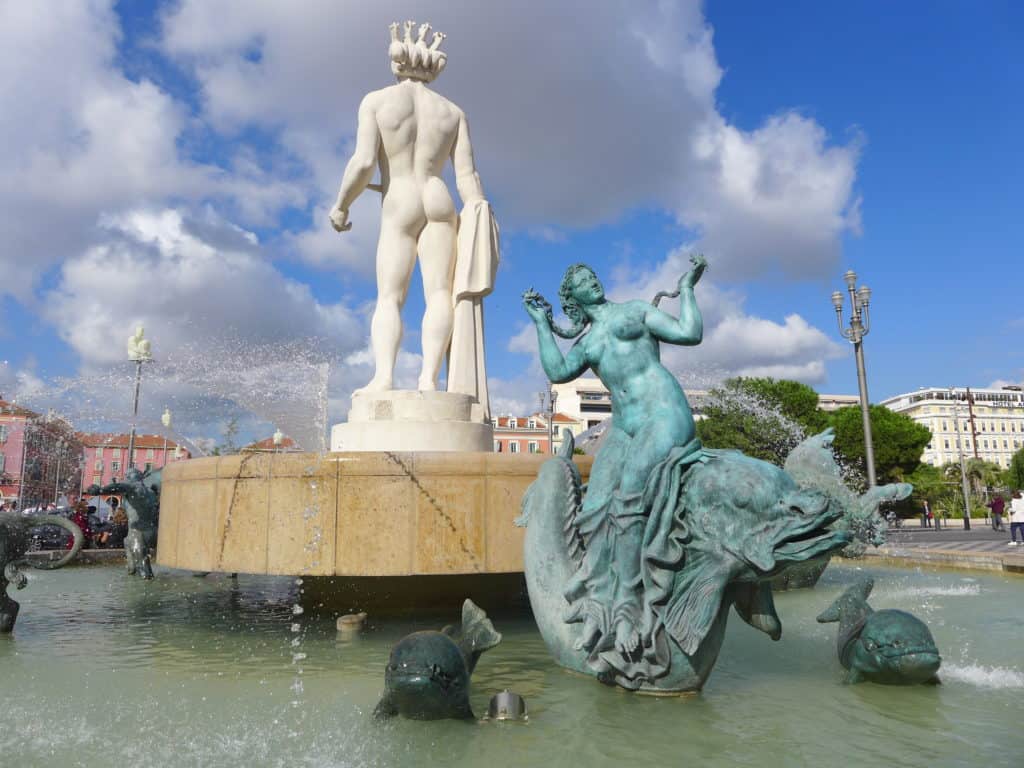 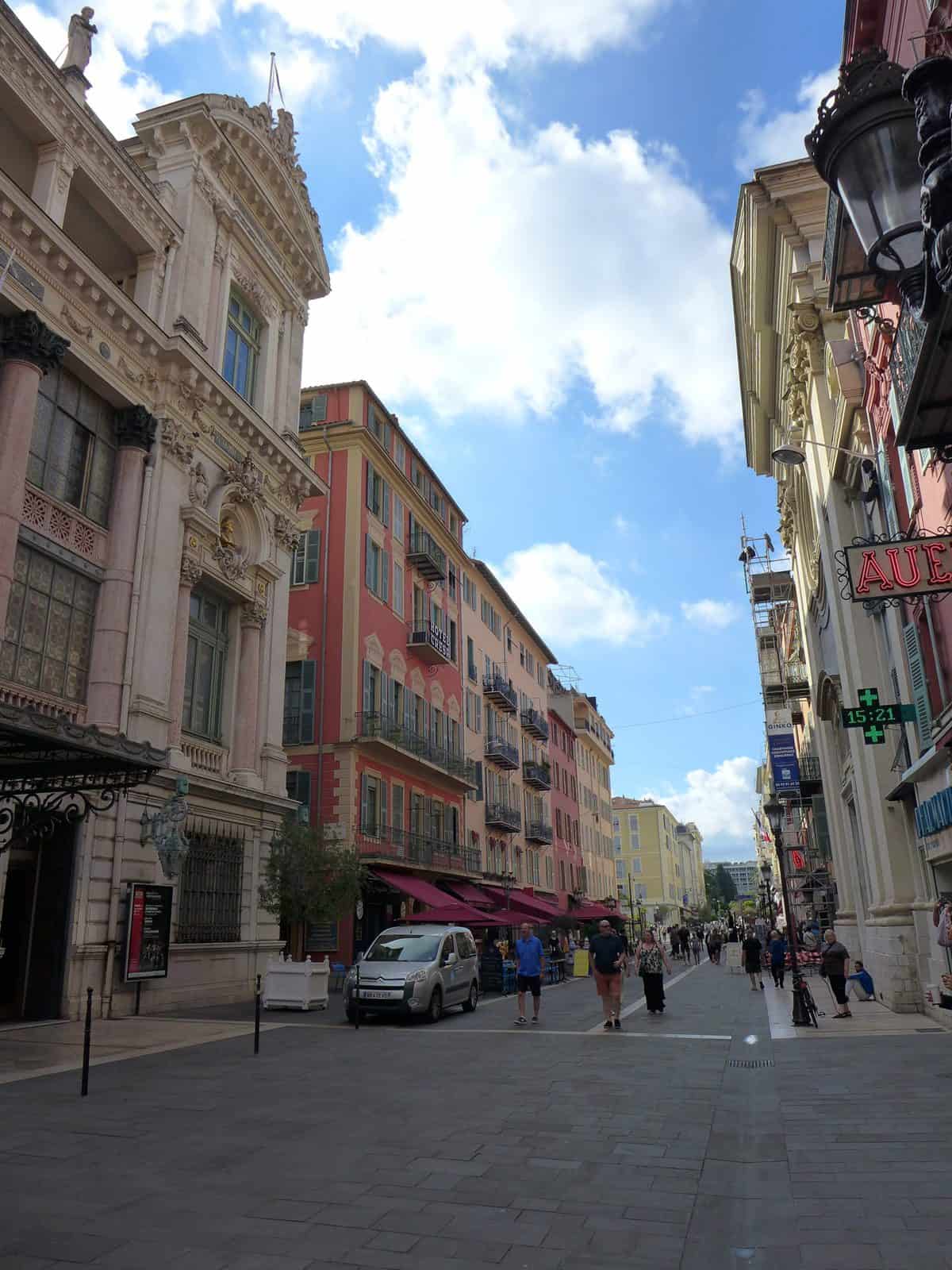 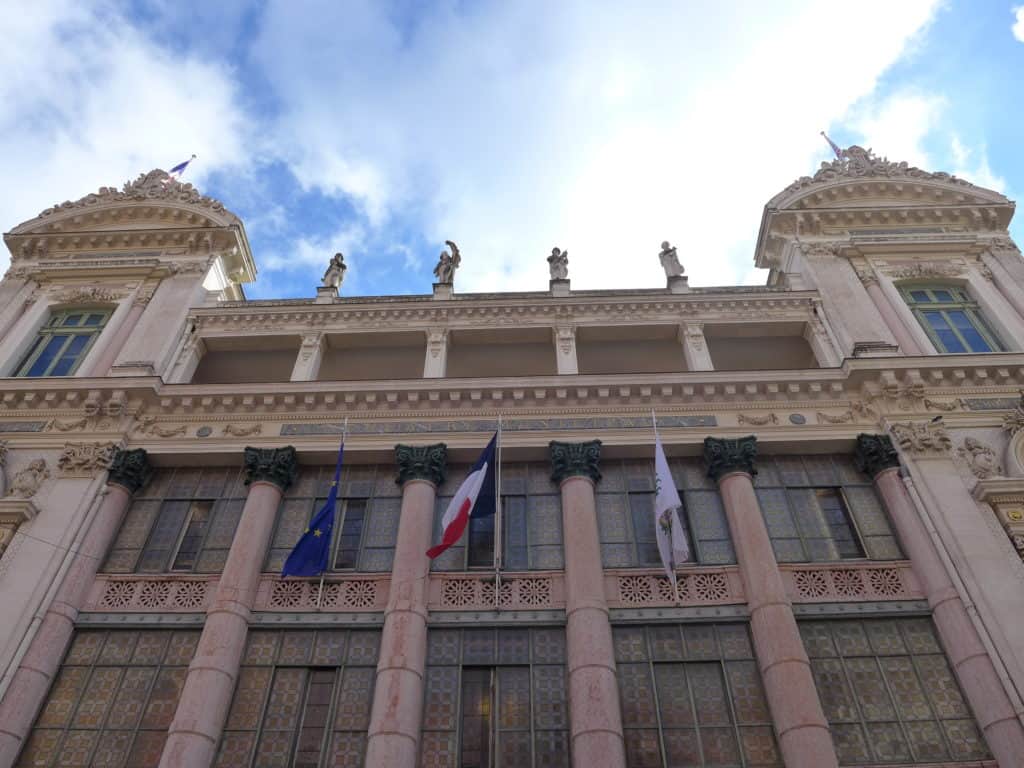 I wish I had more escandalo stories about French statues, but alas I’m tapped out.  I do have AMAZEBALLS pastries though.

Look at this iced bun eclair thing (which I appreciate so much more now that I’ve watched approximately 742 episodes of The Great British Bake-Off).  It was absolutely delish and I felt zero guilt.  The macaron on the other hand was rose-flavored and way too intense for me. 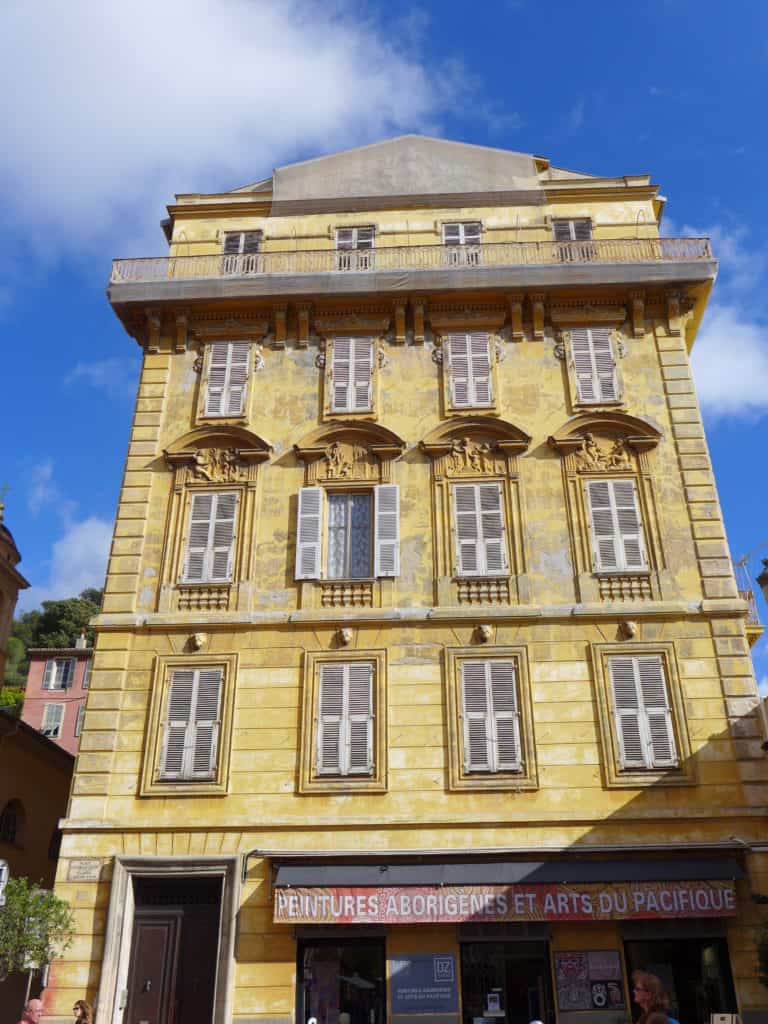 Sweet tooth momentarily satisfied, we wandered down a few streets toward the waterfront. 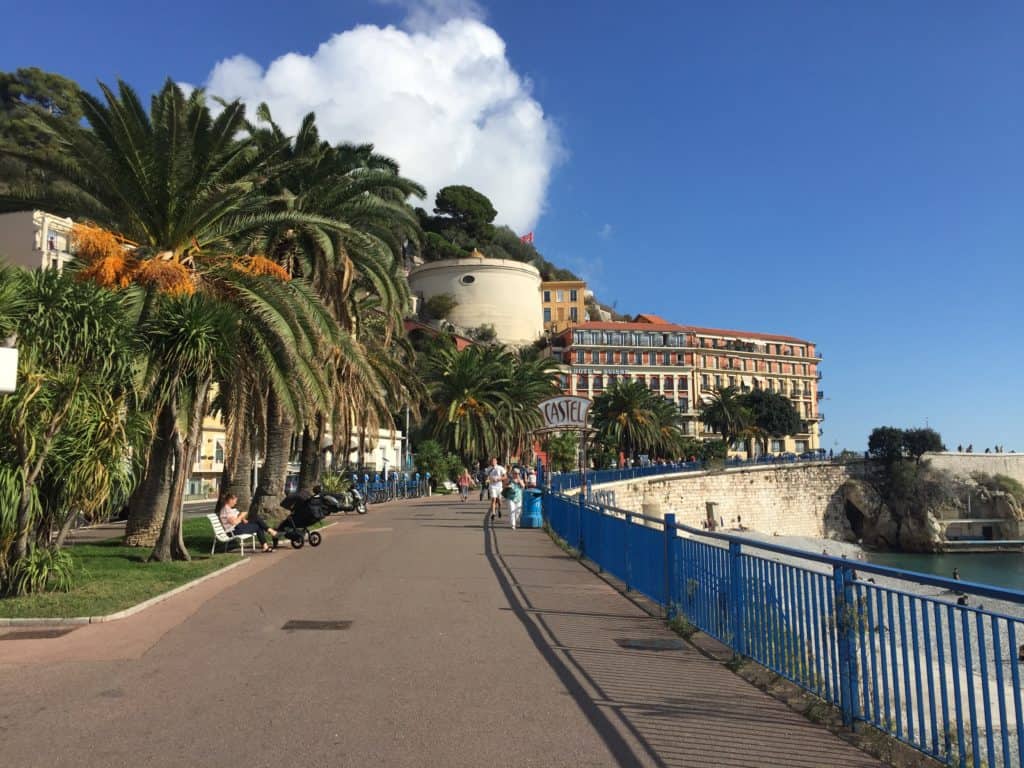 Even though it was mid-October, there were plenty of folks basking in the hot sun.  While we didn’t have time to climb all the way up to the Castel, we did want to get a great view so started walking uphill around the bend to get a better view (see that white patio area below?). 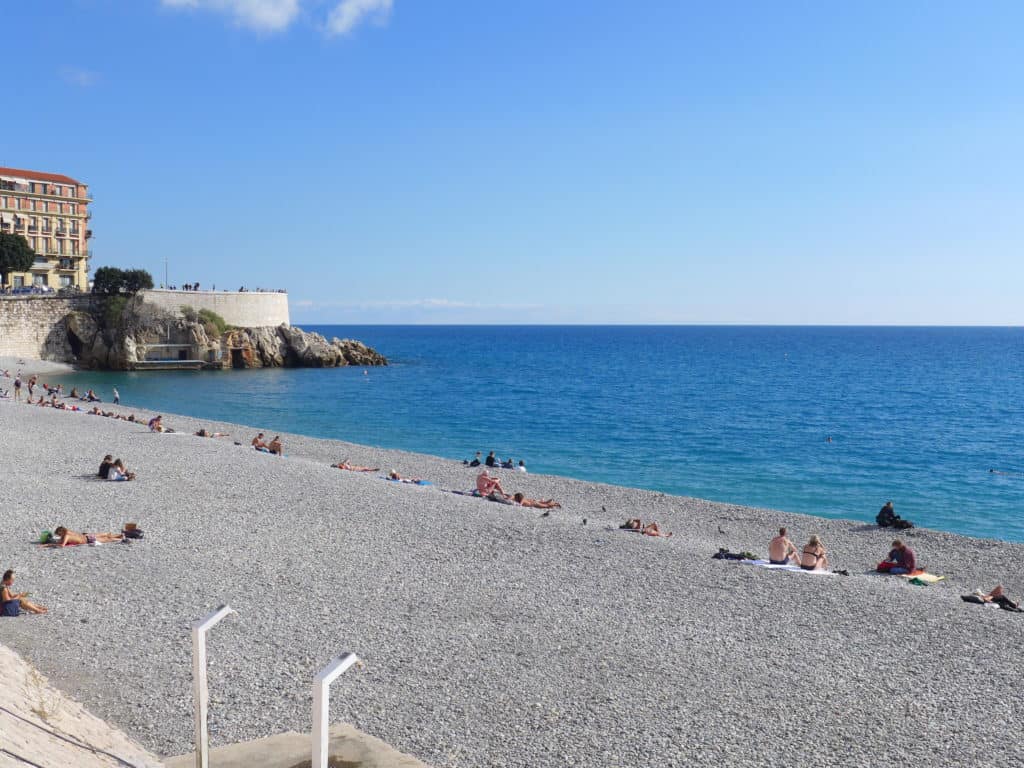 I mean look at the color of that water!! 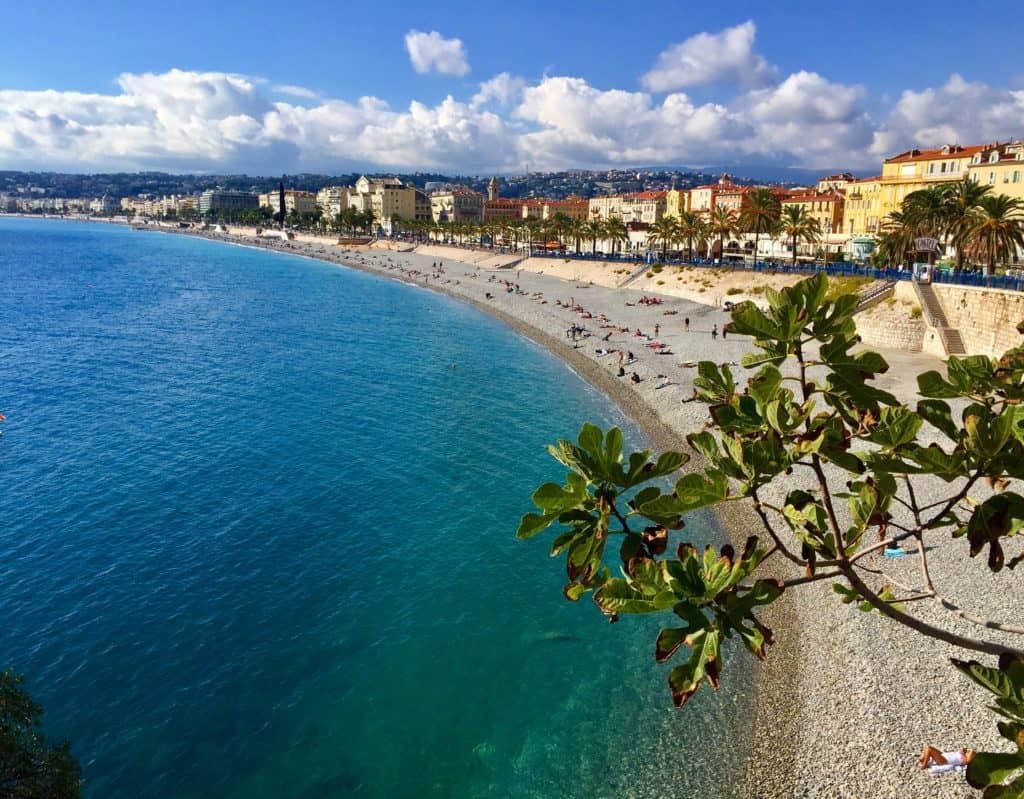 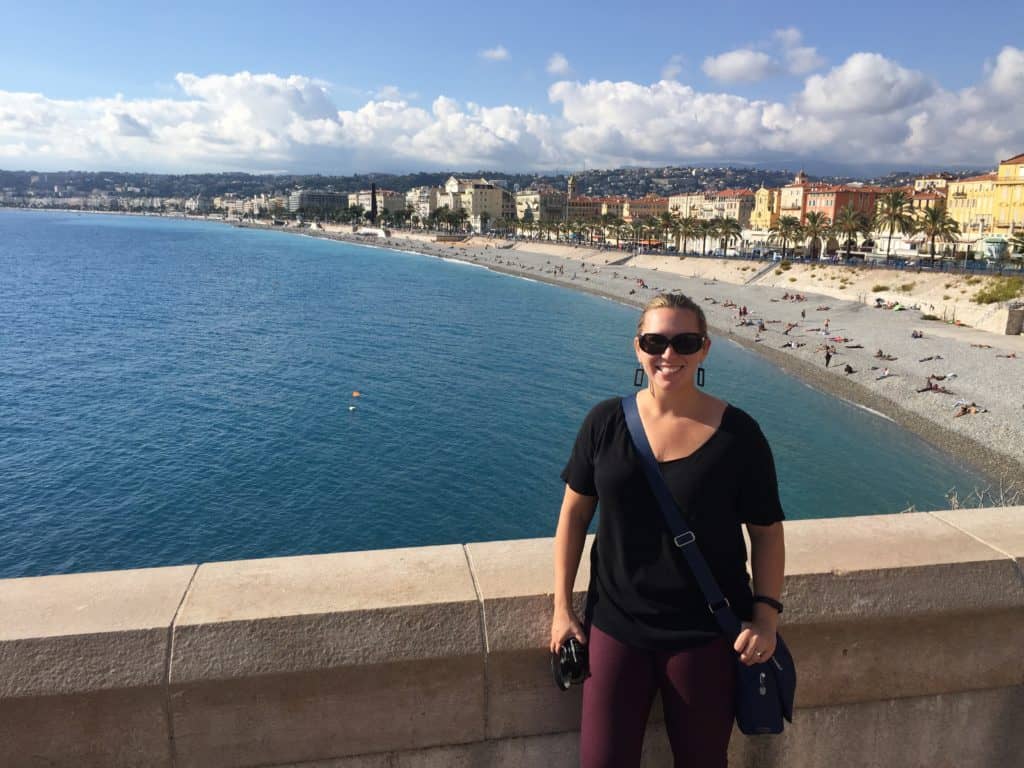 I was definitely rocking my solid black Tieks that day, to keep my feet comfy on all the pavement (though my feet were sweating plenty!). 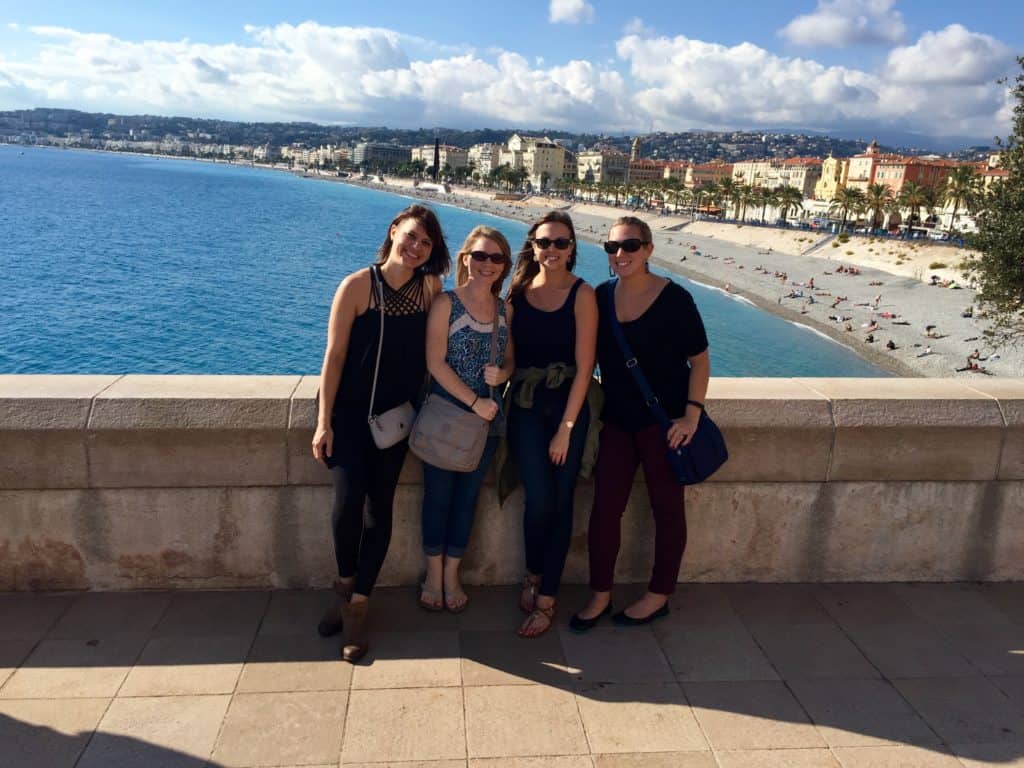 Sadly our time in Nice was gone way too fast (not helped by a waaayyy too long stop in H&M…story for a different day).  We made our way back to the Place Massena and said goodbye to the strange men on poles.

The Riviera treated us to a beautiful sunset as we drove toward Cannes for dinner, a perfect cap on a colorful, delicious, beautiful southern French afternoon. 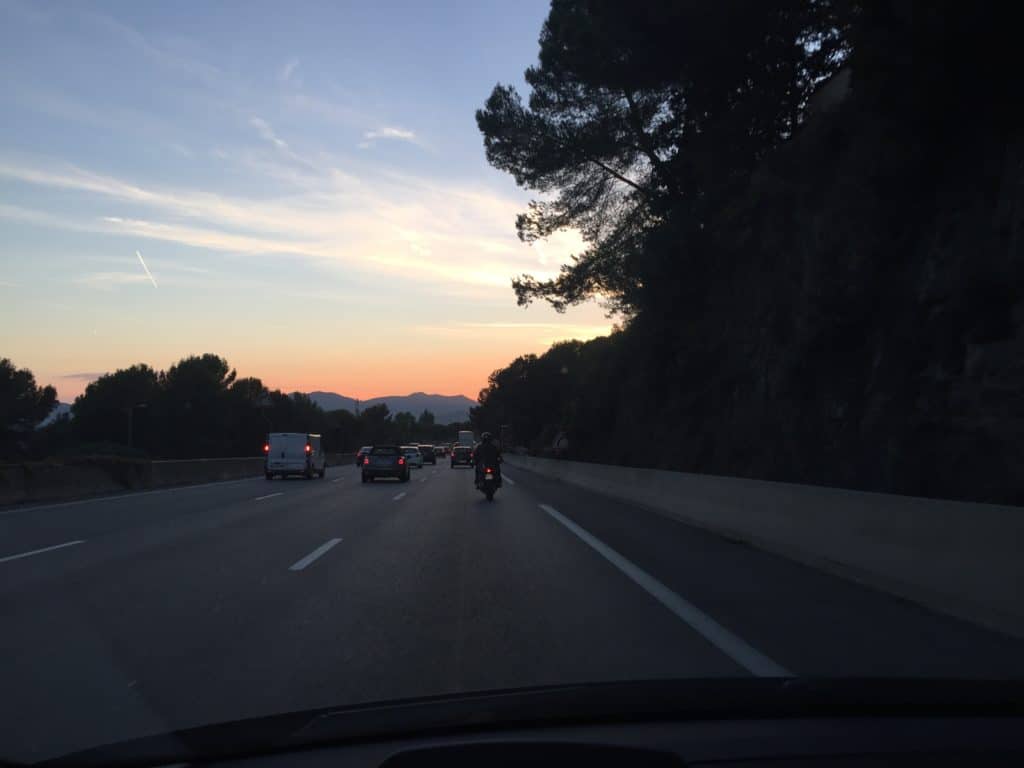 Since we only had a few hours in Nice, I know we missed all sorts of amazing experiences—what are your top picks for the must-see Nice attractions that we didn’t get to??  Let me know in the comments! 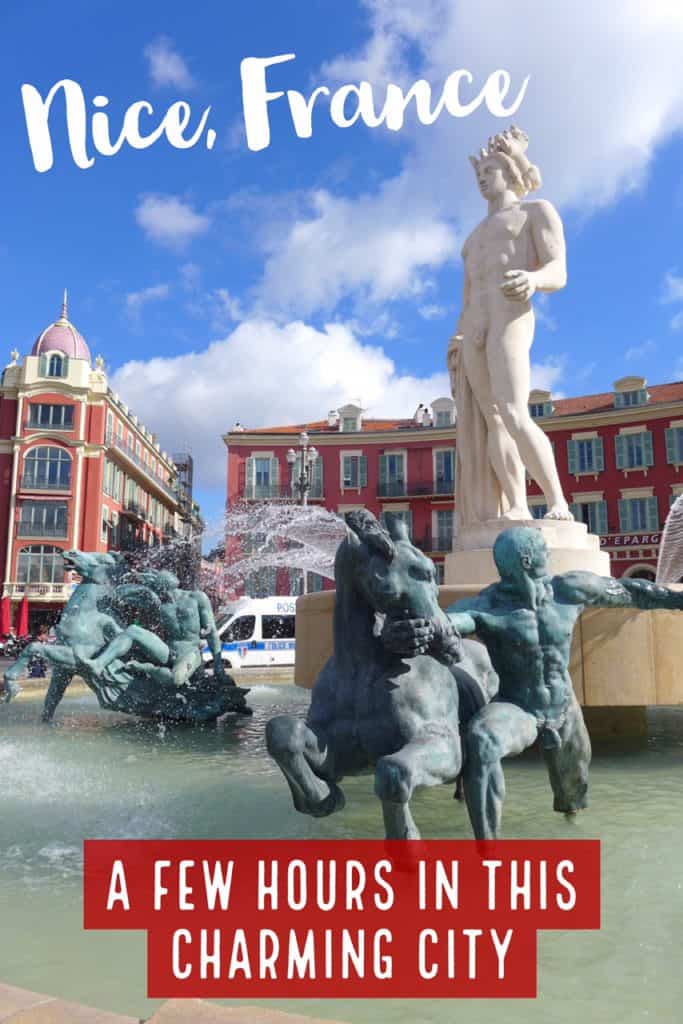 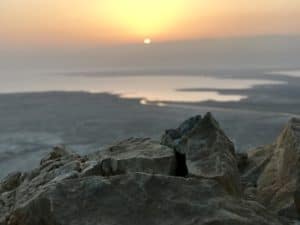 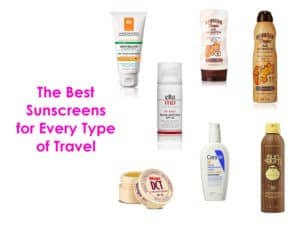 9 Sunscreens I Swear By For Travel