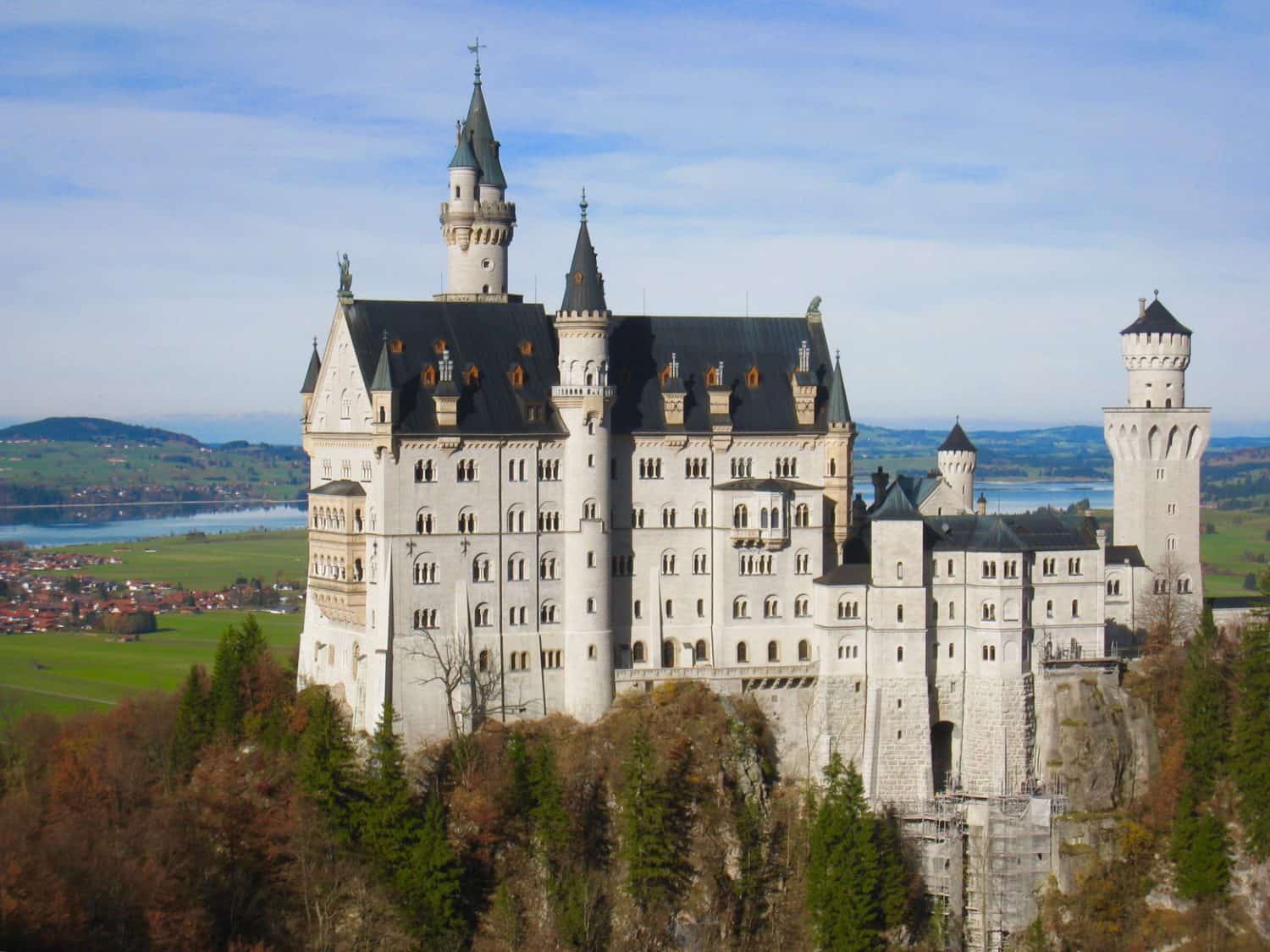 There are days to pretend you’re a princess.  I think this qualifies…because that is a legit fairytale castle on a hill.

Perched high on a hill overlooking stunning alpine scenery, Neuschwanstein (noy-shvahn-stine) is Germany’s most famous castle (and the inspiration for the Disneyland Sleeping Beauty castle). 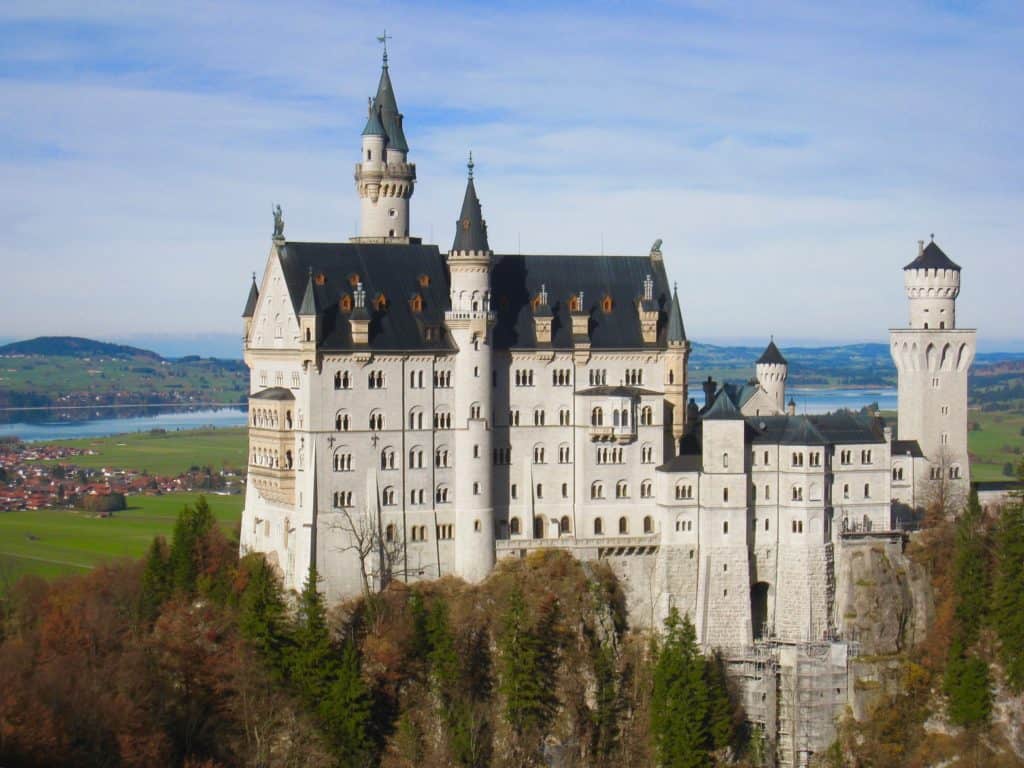 When my parents and I decided to visit Munich and I started doing research on what to see, this jumped to the top of my list immediately.  This trip also ended up being a great example of how visiting in the off-season can really pay off sometimes.  No crowds, much more intimate experience, and couldn’t have asked for more perfect weather.

The history of Neuschwanstein Castle

Designed by the Bavarian monarch “Mad” King Ludwig II, Neuschwanstein Castle was designed to be a hideaway where he could live in peace.  Ludwig ascended to Bavaria’s throne in 1864 at the age of 18, but his kingship quickly became a token office with no real authority after Prussia conquered Bavaria in 1866.

Building Neuschwanstein became Ludwig’s real way of exercising power, and he used an amazing amount of money and resources for the castle’s construction until authorities arrested him in June 1886 and  declared him unfit to act as monarch. Ludwig’s corpse turned up in a lake two days later (and to this day we don’t know the exact reason). 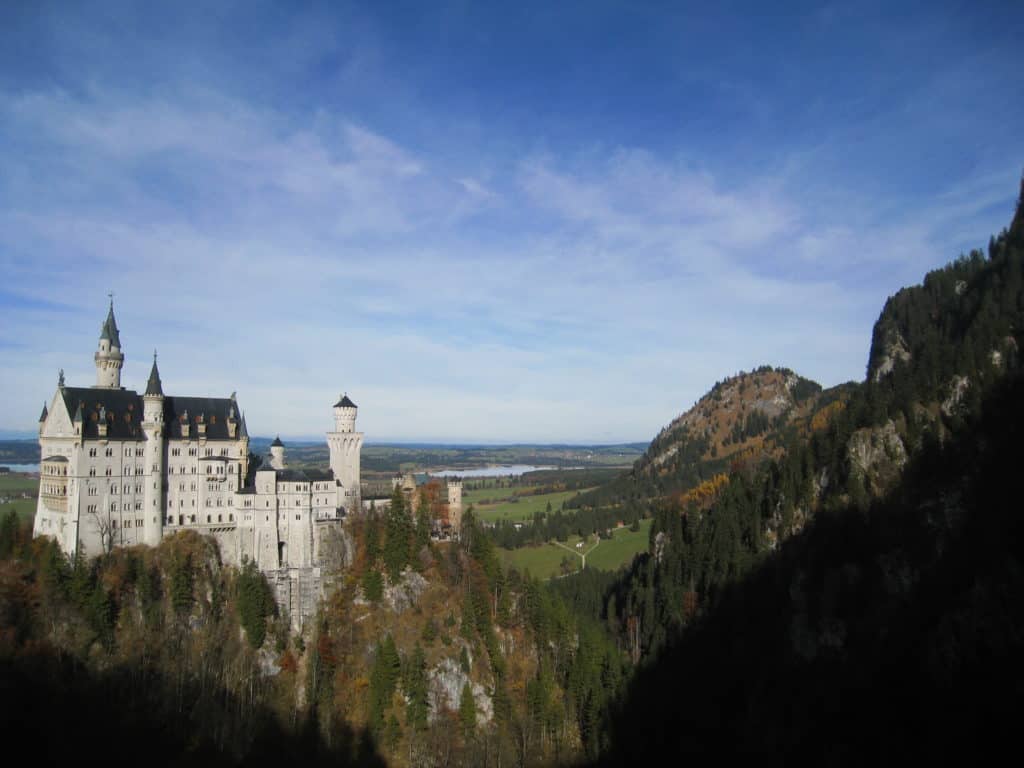 We caught a train from Munich to Füssen a little before 9am.  We had to change trains twice, and I’m honestly not sure why…surely there’s a better way?  It’s honestly been so long I’d need to check.  But we changed in Geltedorf and Kaupberen, and once we got to Füssen we caught the bus to Hohenschwangau and bought our tickets.

Pro tip:  Get your ticket ahead of time, and pay the extra to reserve a specific time.  This can save you a lot of time standing in lines, and it’s definitely worth the extra couple bucks.

We purchase our tickets ahead of time, and were lucky it wasn’t super busy (though we were also there in early November, so not peak tourist season).  And it was 2010, so booking everything online wasn’t quite as normal.  But still, it would be a mistake today not to reserve ahead. 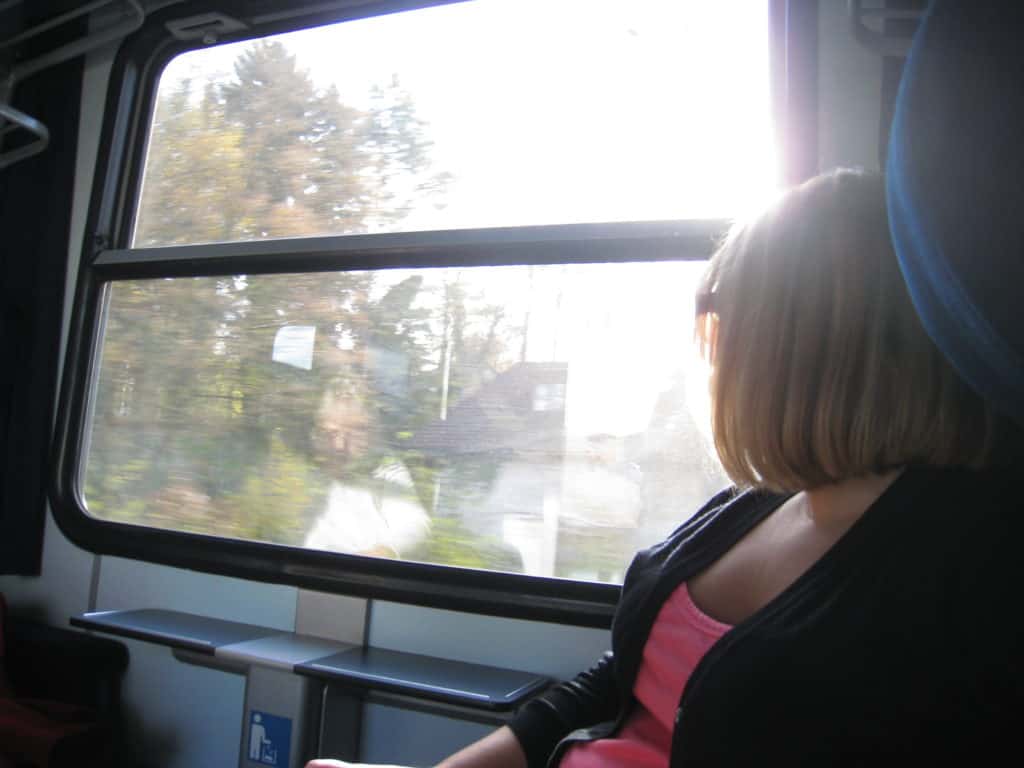 The village of Hohenschwangau

You’ll arrive on the bus (or drive, if that’s your deal) in Hohenschwangau, the little village below Neuschwanstein Castle.  The village itself is super touristy, a bit like the feeling of Disneyland’s Main Street.  Not to my particular taste.

You should plan to get to the village about an hour ahead of your tour time, to allow for parking (if applicable) and catching a ride up to the castle (since it can take some time in peak tourist season). 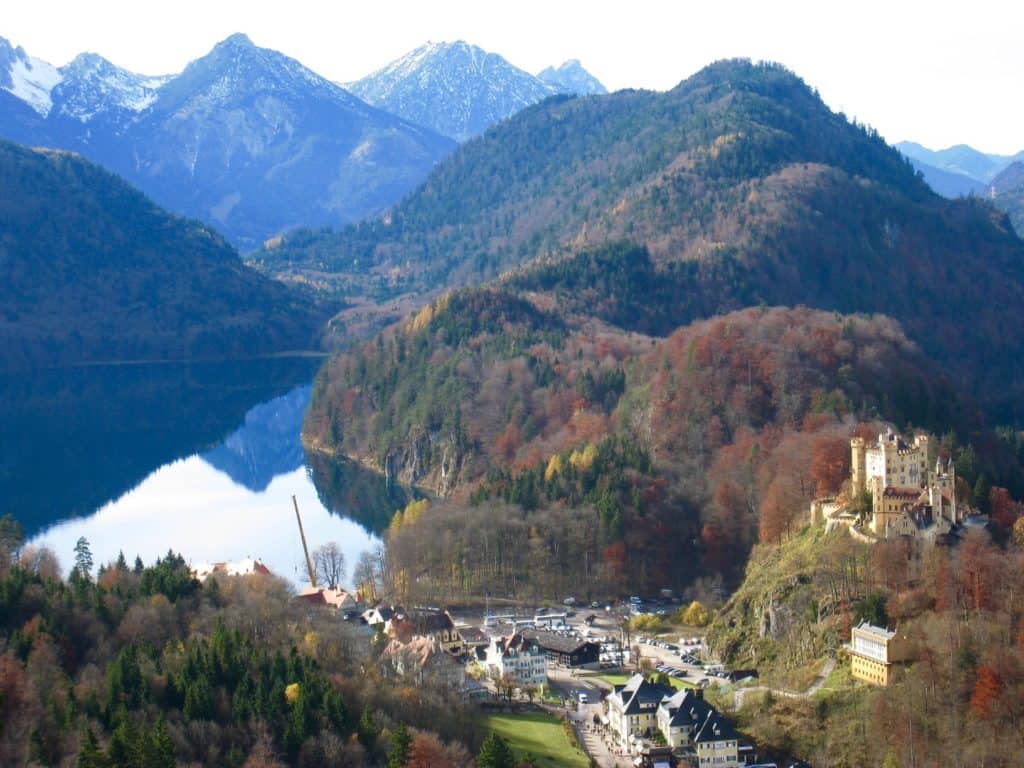 This is Hohenschwangau Castle, in the village.  It’s still pretty amazing, but obviously gets overlooked in comparison to the splendor of Neuschwanstein.  This is where Mad King Ludwig (we’ll get to him in a bit) grew up.  If you have extra time you should tour the castle, but you’ll need to skip it if you’re tight on time. 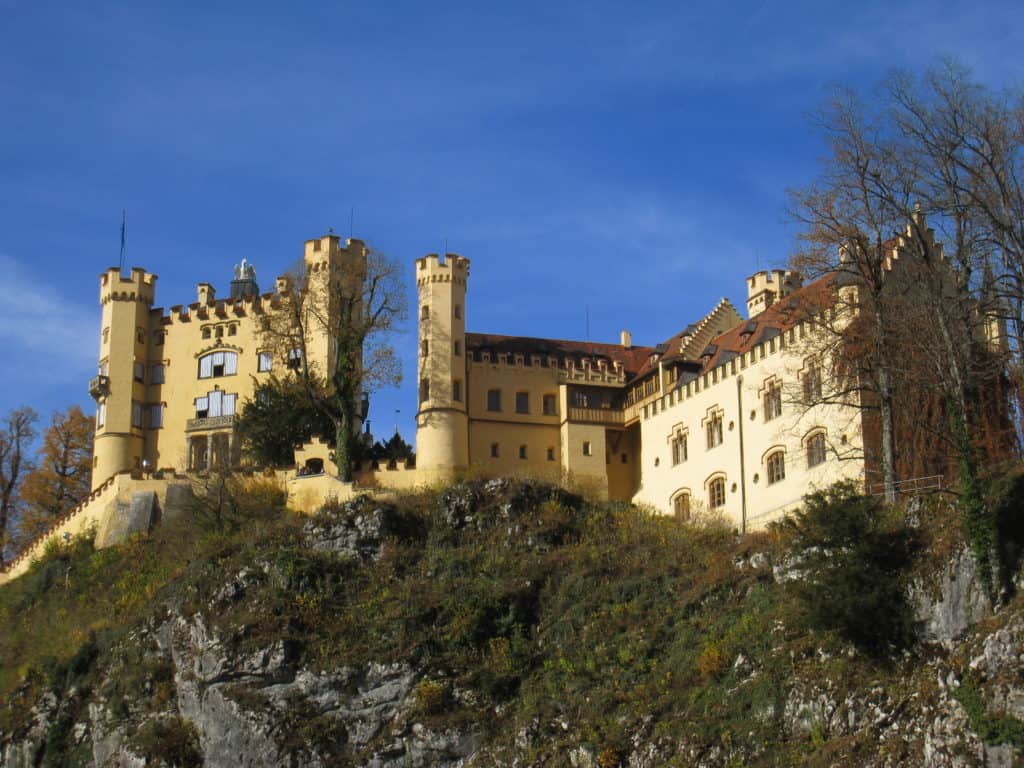 Once you’re in the town, there are a few ways to get up to Neuschwanstein:

When we got off the shuttle, we had some time before our tour, so we walked a few minutes walk down the trail, where Marienbrücke (Mary’s Bridge) hangs between two cliffs.  Side note, if you’re running short on time, you can always double back here after your tour as well. 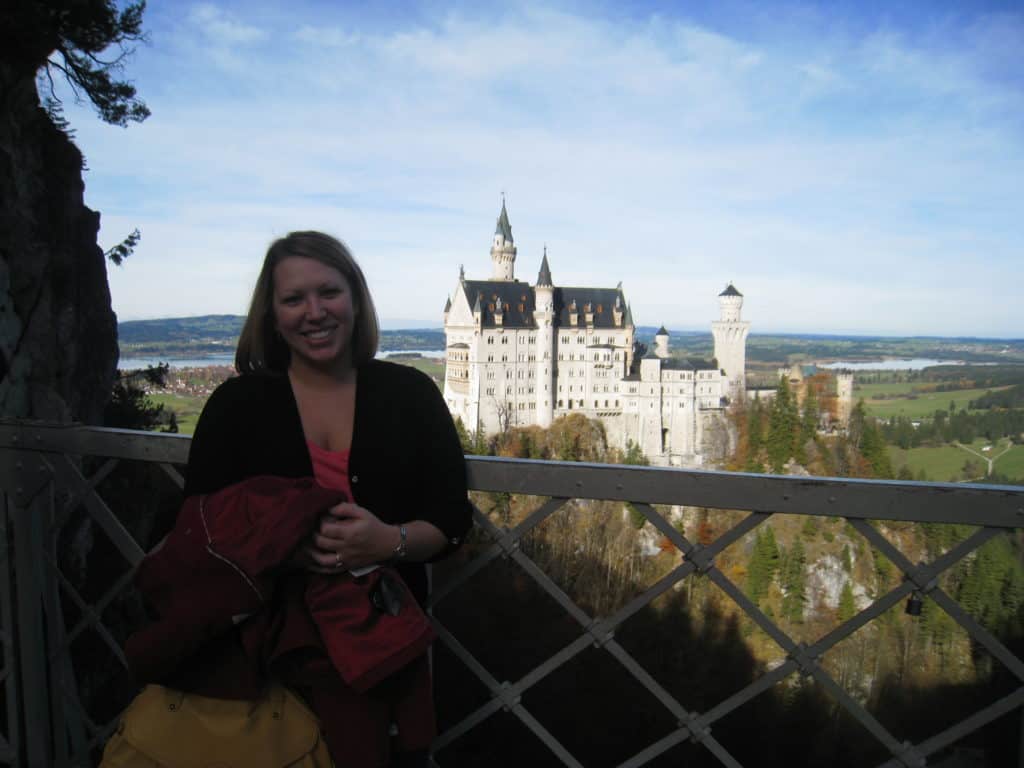 We wallowed for a while in the stunning views of the castle.  And the mountains and trees and Alpsee Lake in the background.  But mostly the castle.

I MEAN LOOK AT IT. 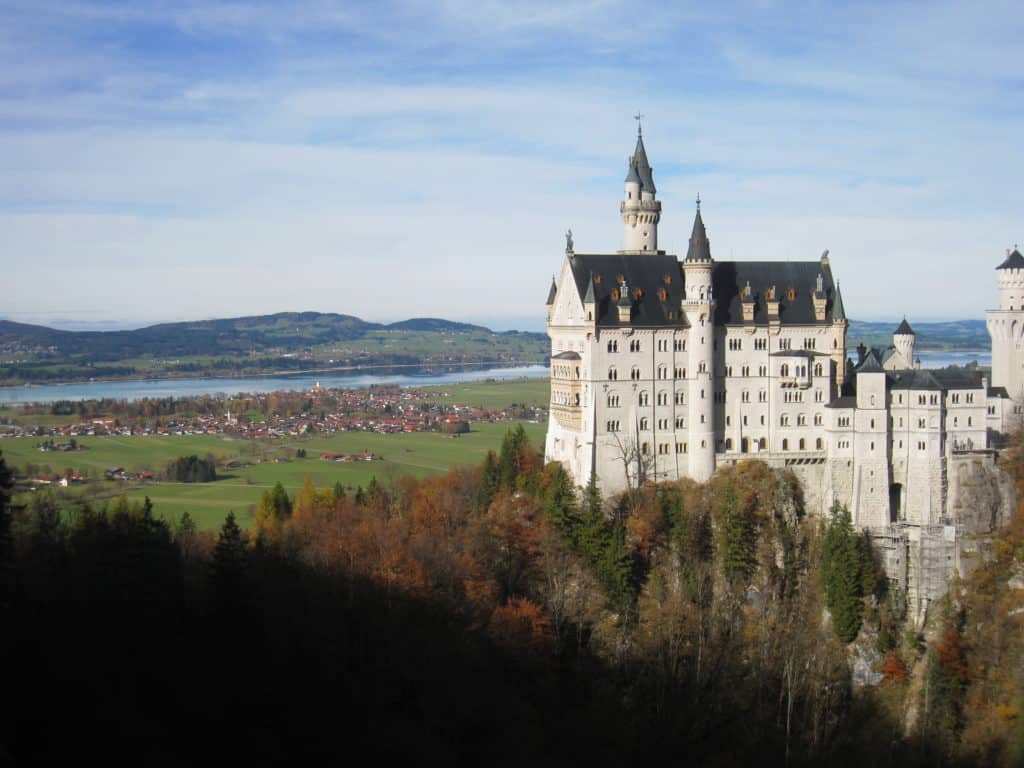 If you’re afraid of heights, Marienbrücke might cause you some anxiety, but rest assured that the bridge will hold everyone’s weight and the views you’ll get are completely worth it!  In fact, it was just renovated fairly recently (as of 2011).

Once we’d gotten scads of pictures, we walked down the hill to the base of the castle to tour the inside.  We were blessed with not only a gorgeous fall day (certainly not a guarantee in early November), but vibrant fall foliage, which popped so beautifully against the white stone. 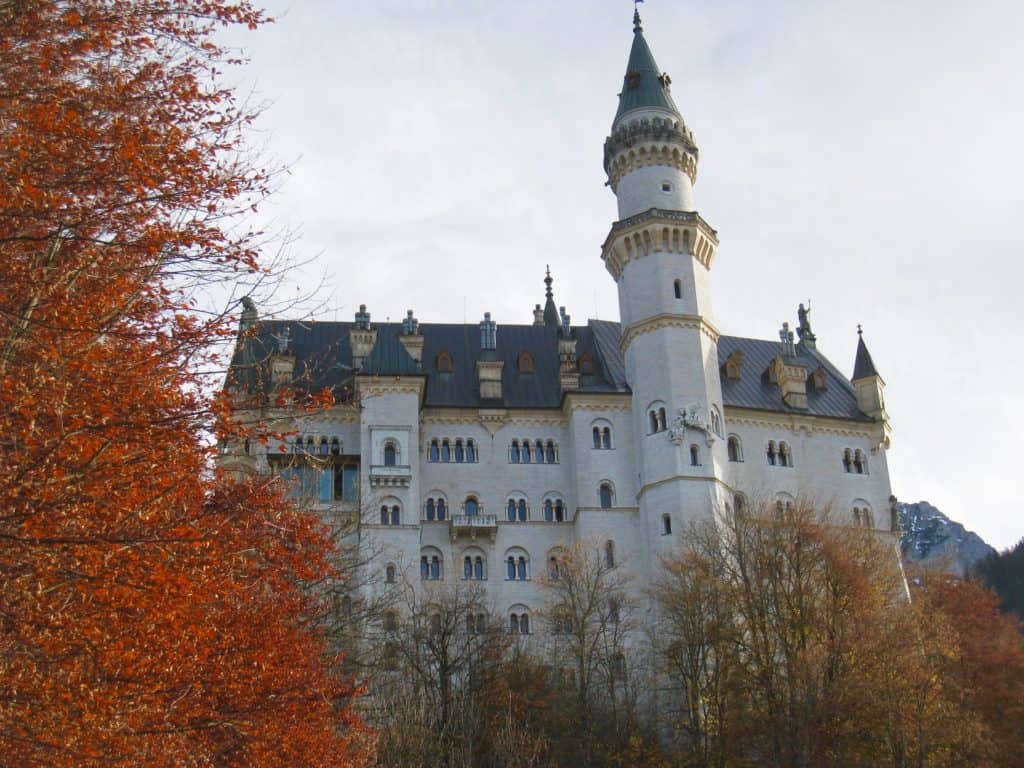 Pro tip:  make sure to get to the entrance with 5 or 10 minutes left before your tour time.  Then just keep an eye on the screens so you can see when your group is able to get in line. 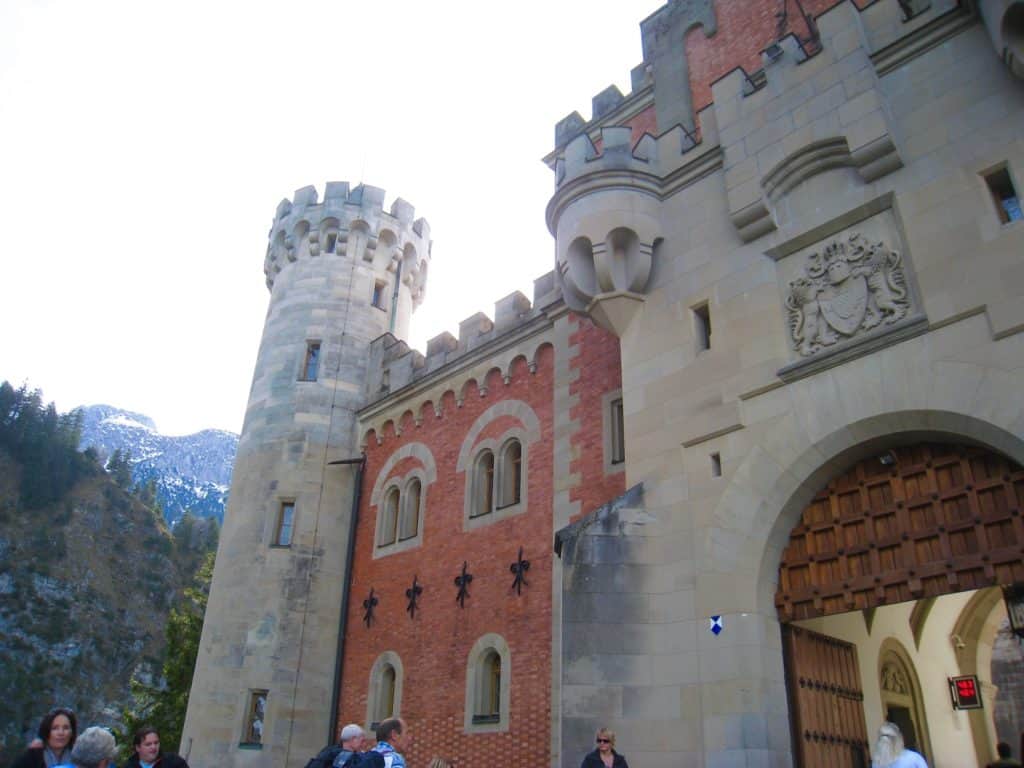 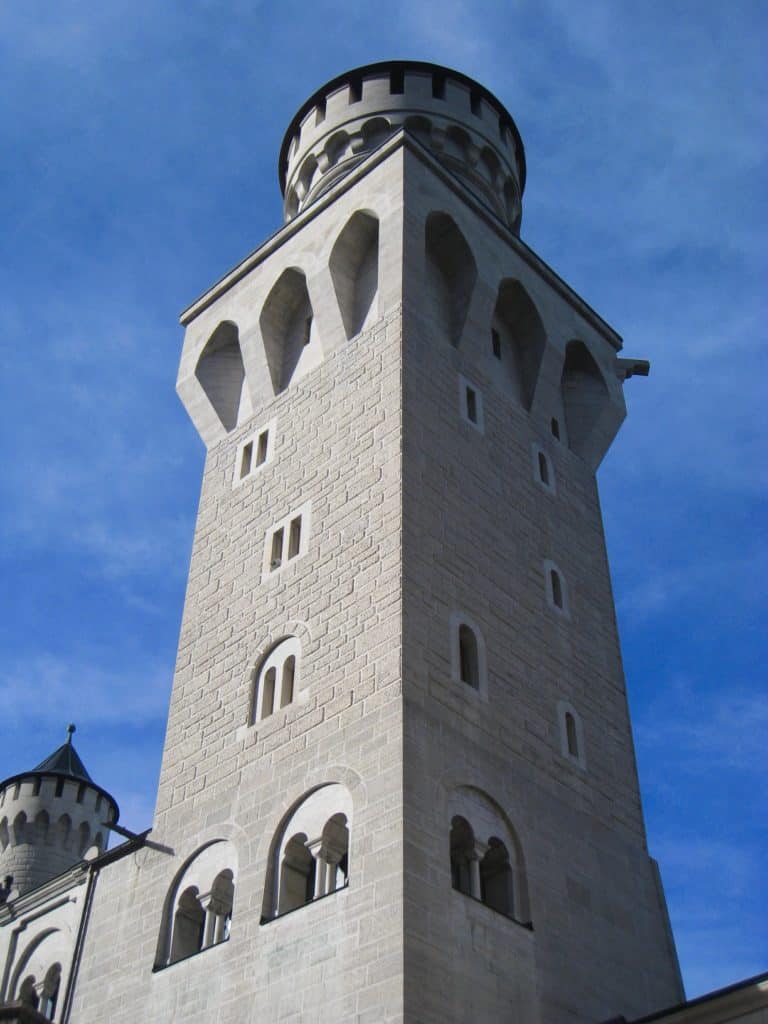 And I mean, the views while you’re waiting aren’t gross… 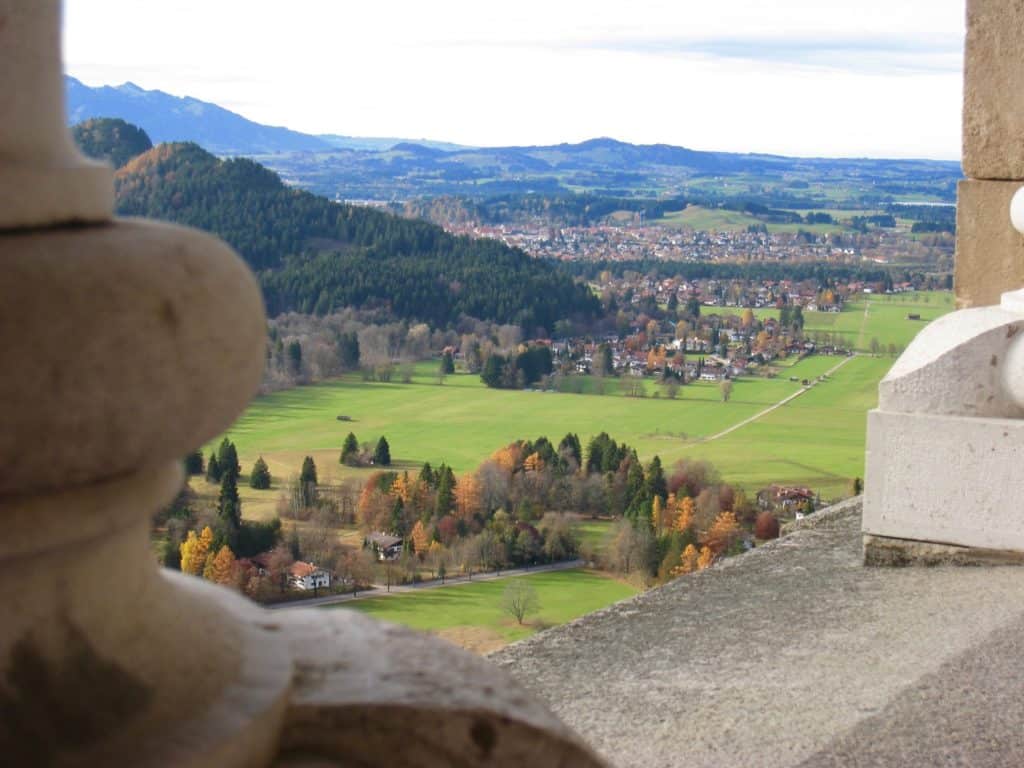 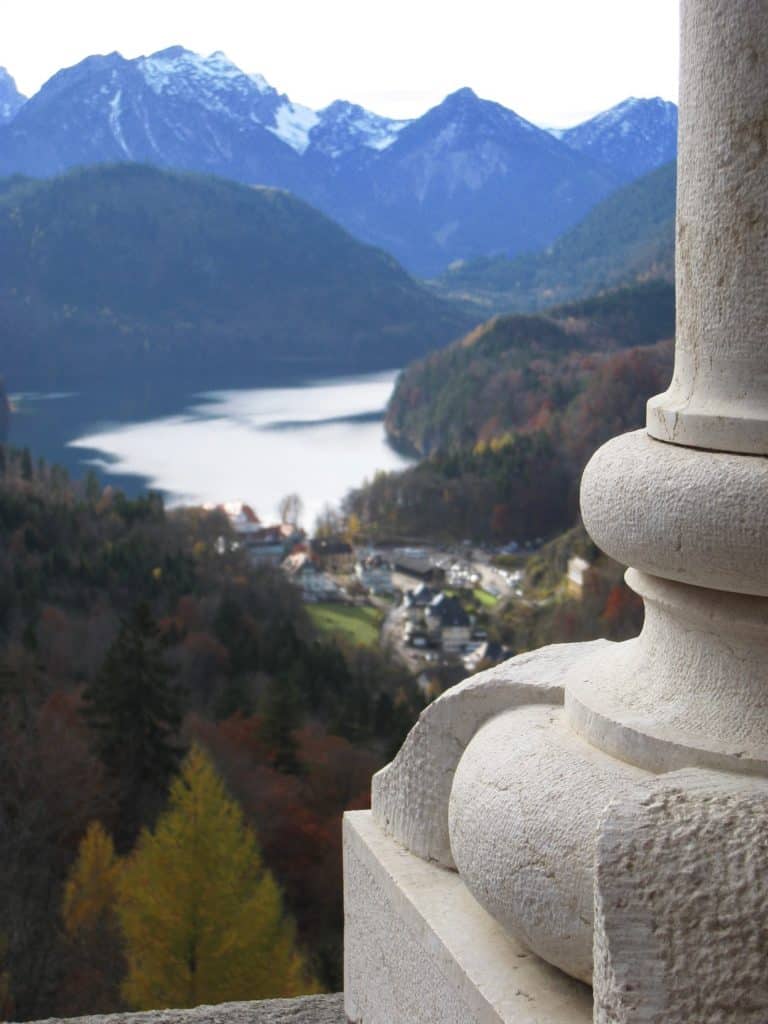 The tour inside lasts less than an hour and costs about $15-17 USD (depending on the exchange rate).

I deleted my pictures of the inside years ago because they weren’t any good…which I now regret.  But the inside is basically a giant love letter to the composer Wagner.  Mad King Ludwig was completely obsessed with his operas.  The interior showcases incredibly ornate Gothic wood carvings everywhere, medieval themes, lots of gold inlay and rich, colorful paintings.  It’s pretty over-the-top. 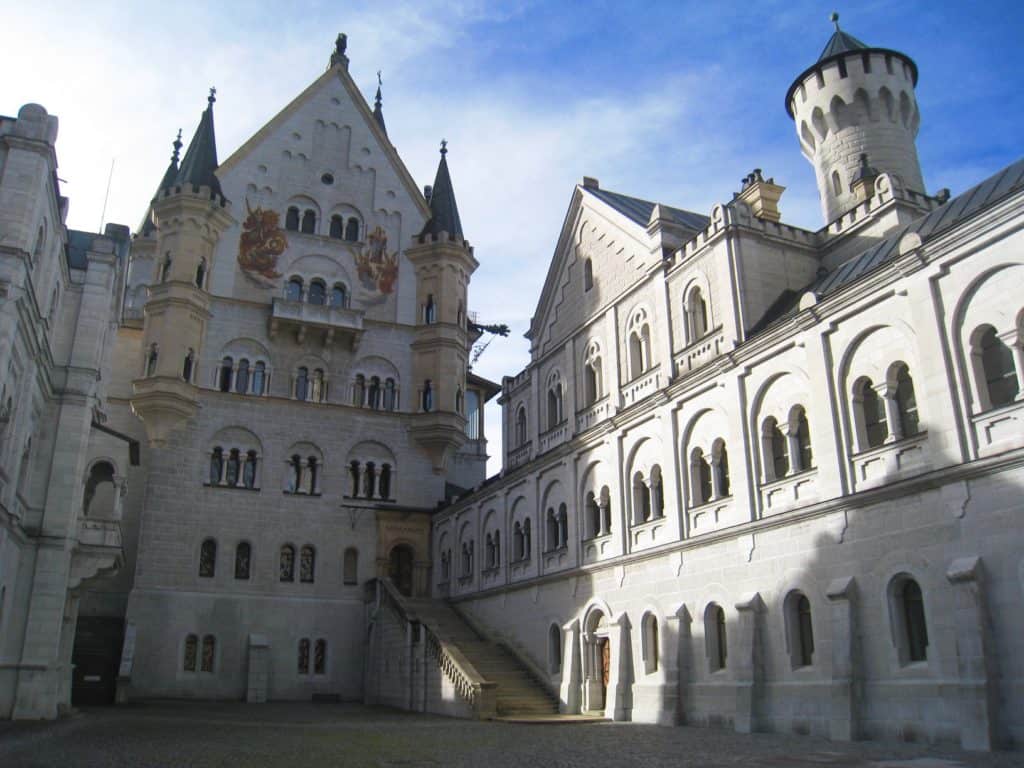 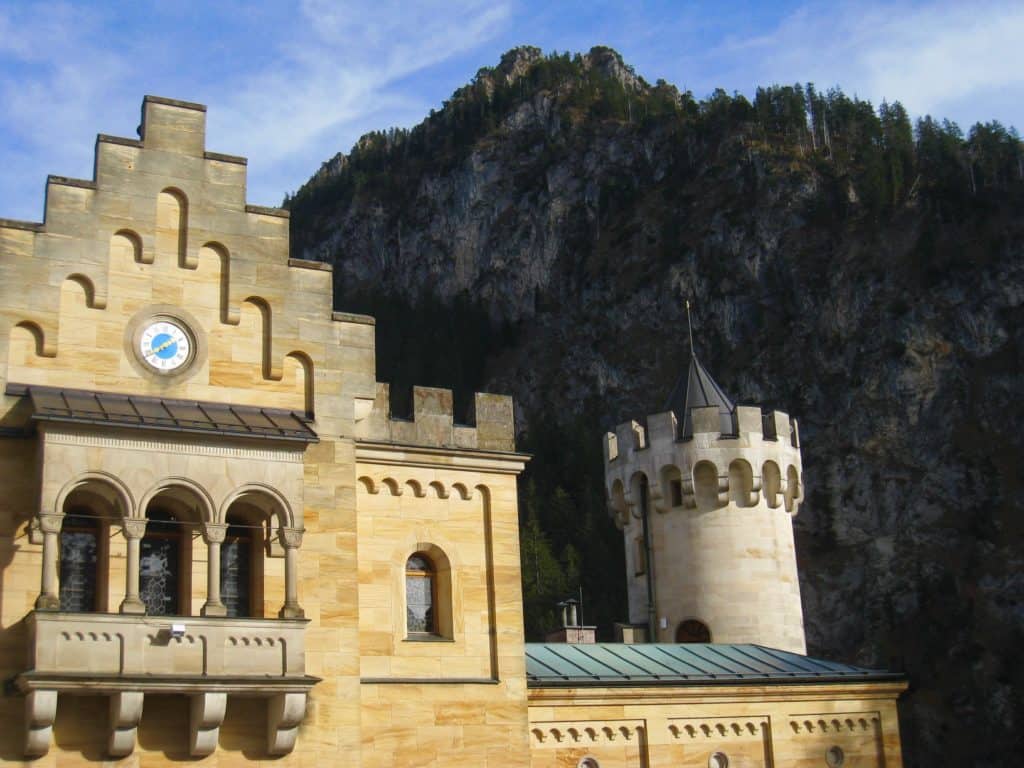 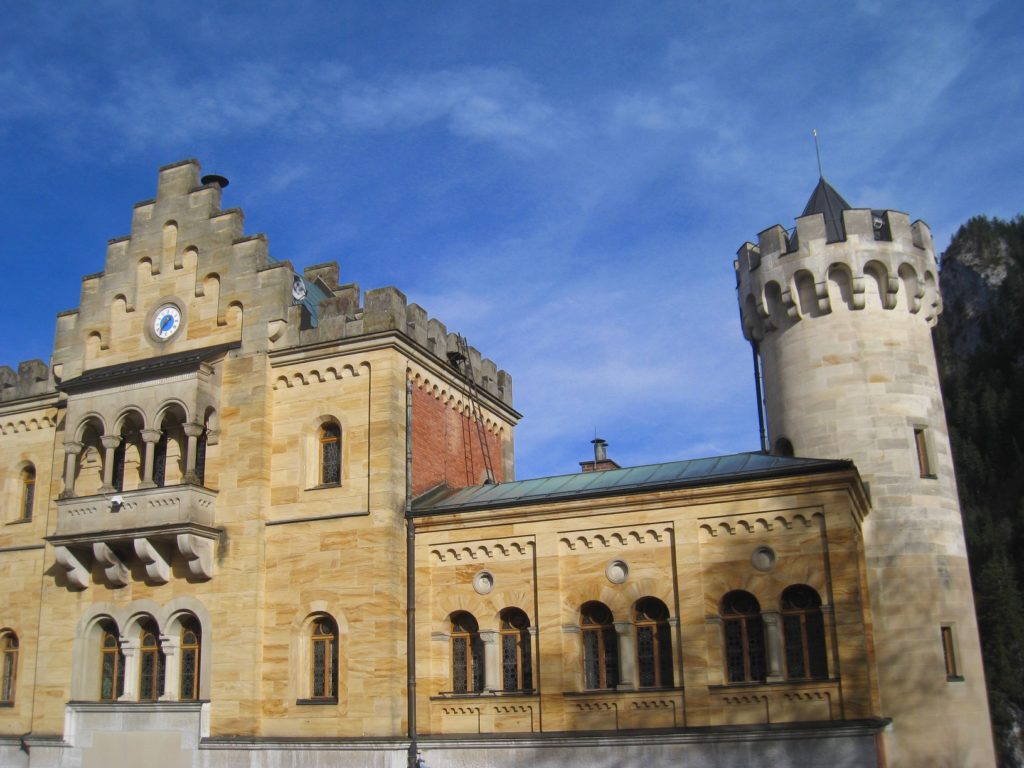 When you’re done with your tour and have gazed your fill from Marienbrücke, you can either catch a shuttle back down or walk.  It was a gorgeous day so we walked, and happened upon this lovely lady selling hot fresh donuts.  Which I devoured in two seconds flat.  Donuts are always the answer. 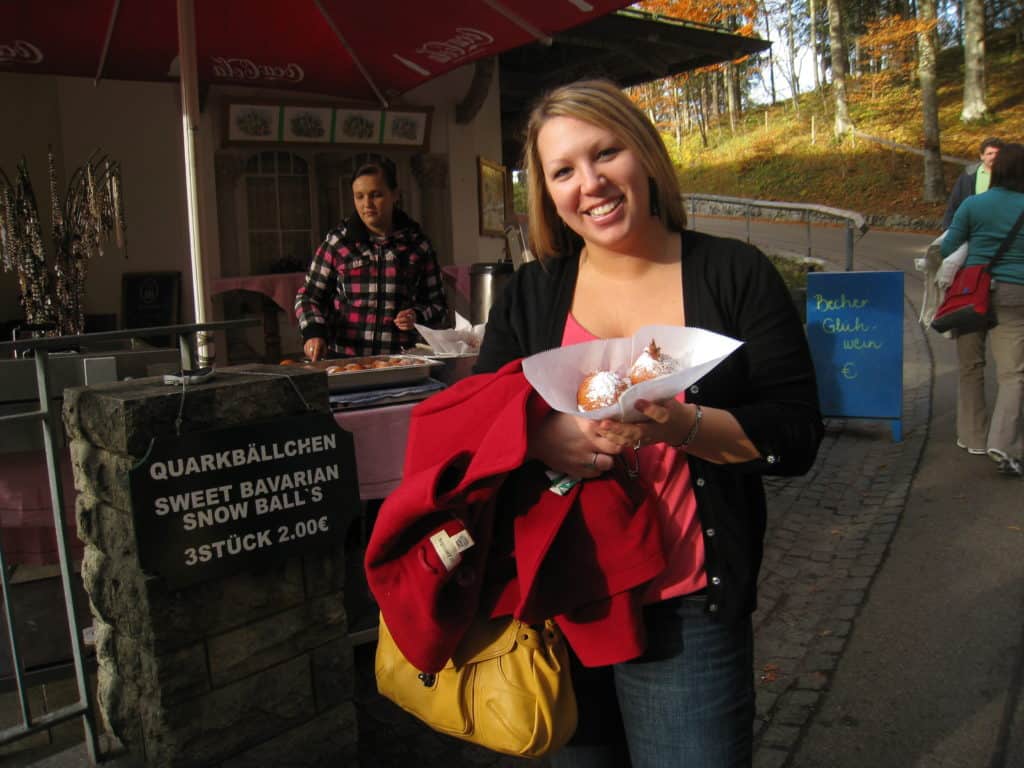 The bus and train ride back to Munich was uneventful, and we finished our beautiful day with a pint at the Paulaner biergarten, tired and exhilarated from the beauty of the day.

Fun story from this biergarten:  My dad ordered cold herring and gherkins and when it came, he was like, “I can’t tell which is the herring and which is the gherkins.”  I was like, “Um…one is fish and one is pickles??  Why is that hard?!”  Such a weirdo. 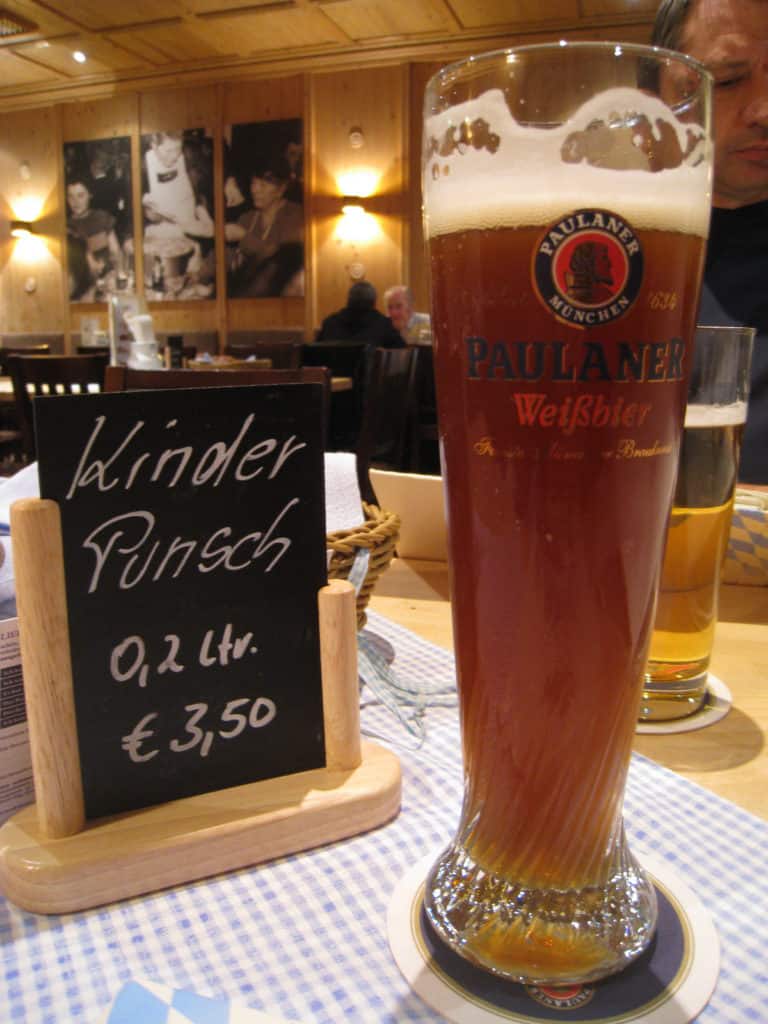 Planning a trip to Neuschwanstein Castle

What’s the most magical castle you’ve ever visited?  Let me know in the comments! 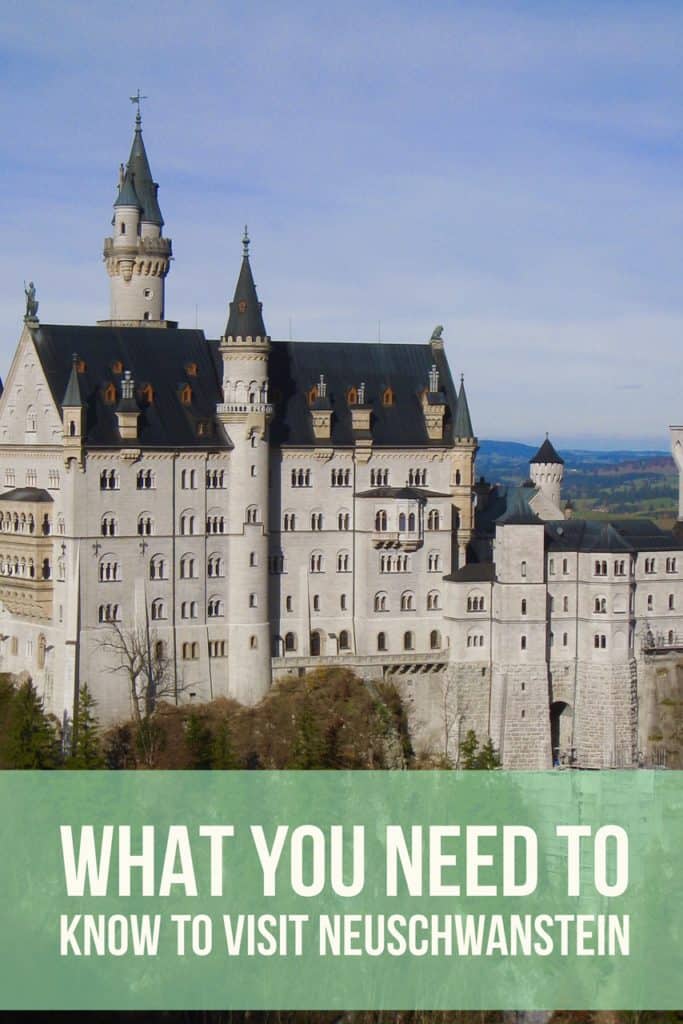 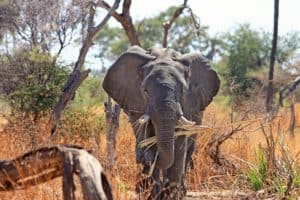 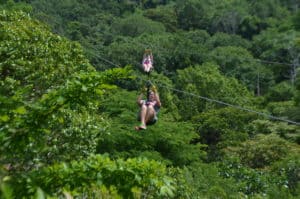 An Afternoon of Ziplining in Costa Rica