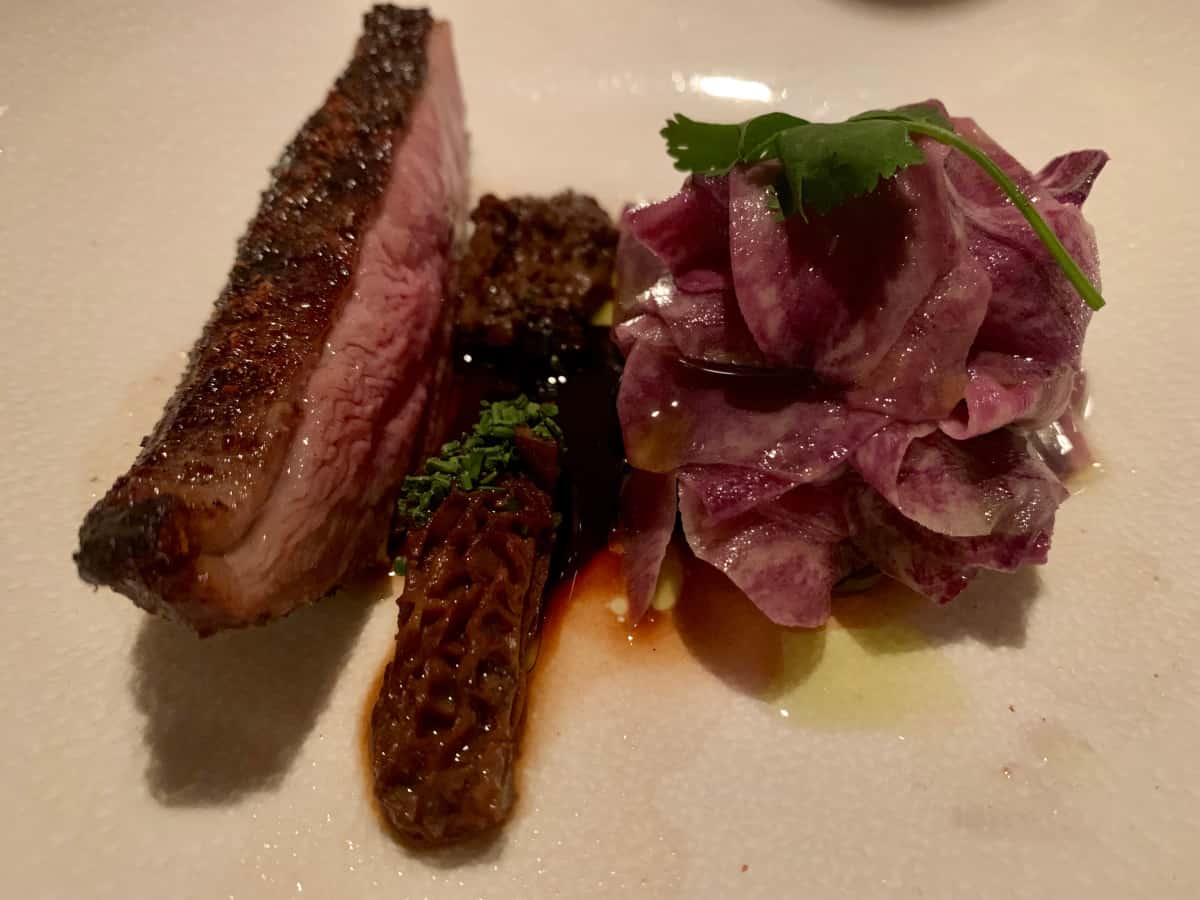 When I planned my epic 35th birthday Turkey trip last year, I had a few must-do things, but then knew I’d end with most of a day in Istanbul before flying out.  I didn’t really have plans for the city (one of my faves!) so just figured I’d play it by ear.

But towards the end of planning my trip, I was having a glass of wine with the woman who helped plan it (hi, Katie!) and the bartender where we were drinking started on a total tangent around the World’s Top 100 Restaurant list.  And somehow at the end of that conversation I ended up with a birthday dinner reservation at Mikla, #52 on the 2019 list… 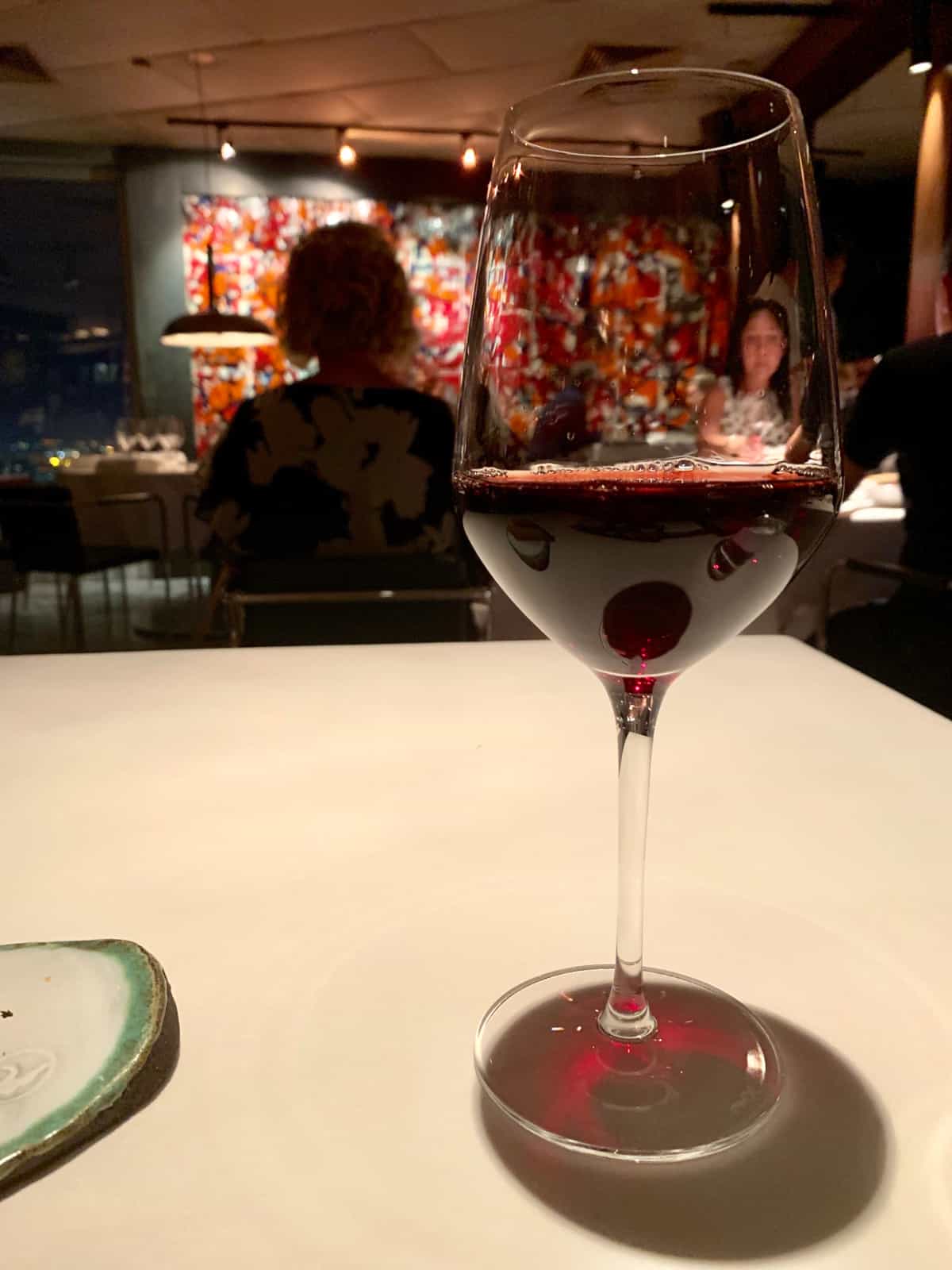 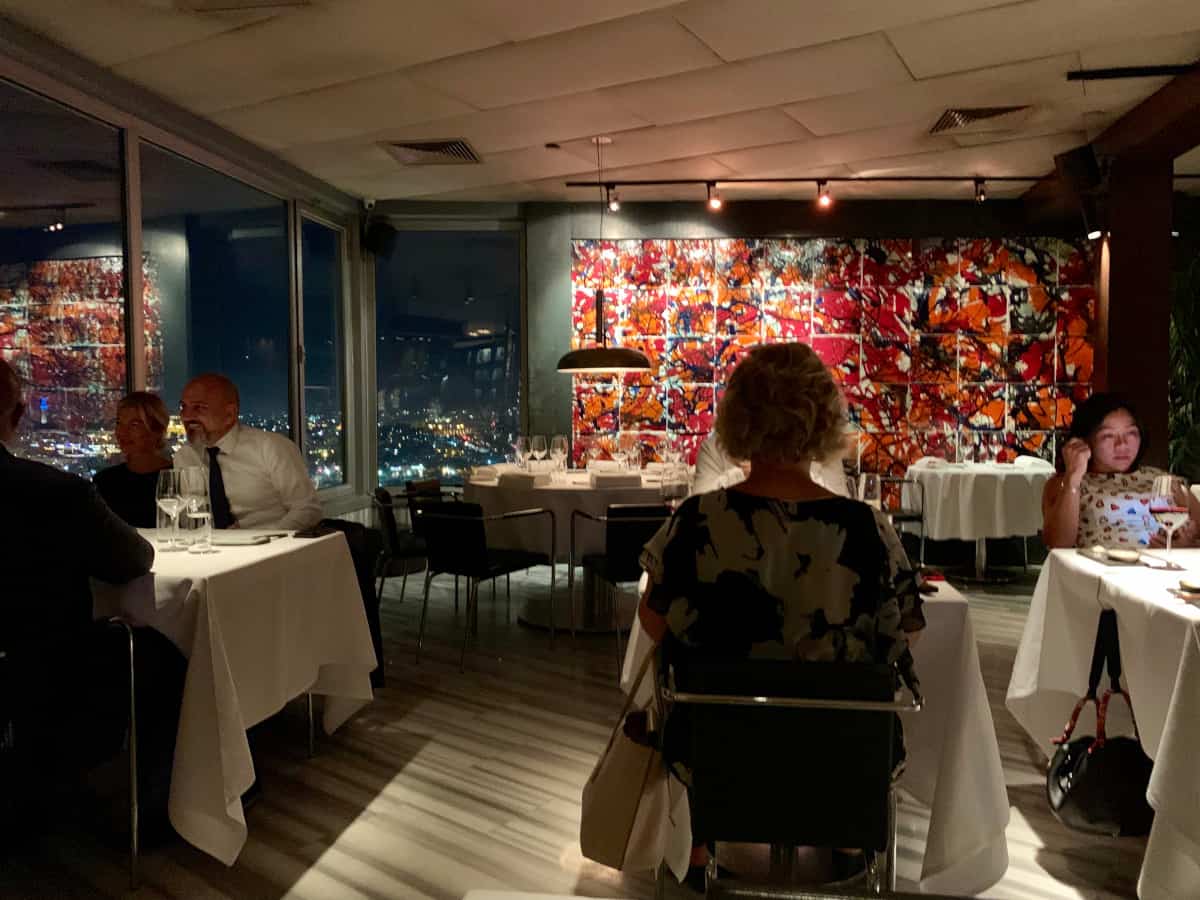 Billed as a “new Anatolian Kitchen”, Istanbul’s Mikla is a really fascinating modern spin on very ancient, traditional Anatolian dishes, flavors, ingredients, and overall culture.  You can read more about their overall approach on their website, but it’s basically a celebration of that region and the many cultures that it birthed.

Bottom line on Mikla:  The food was great, ambiance was nice, prices were shockingly appropriate, and service was adequate.  I’ve also included photos of the menus at the bottom so you can see what types of things were offered (they do change the menu a lot).

Planning a trip to Turkey??  Here are some posts to help you out!

A First-Timer’s Guide to Cappadocia

20+ Turkish Foods You Have to Try

Or explore all my Turkey posts!!

What to expect at Mikla Restaurant

I got the three-course meal with wine pairings (only about $120 which is insanely good), and they brought out a couple starters that weren’t part of the main meal.  I tried so hard to choke down this cucumber thing (literally my least favorite food in the world), but the bread and dips were very much up my alley! 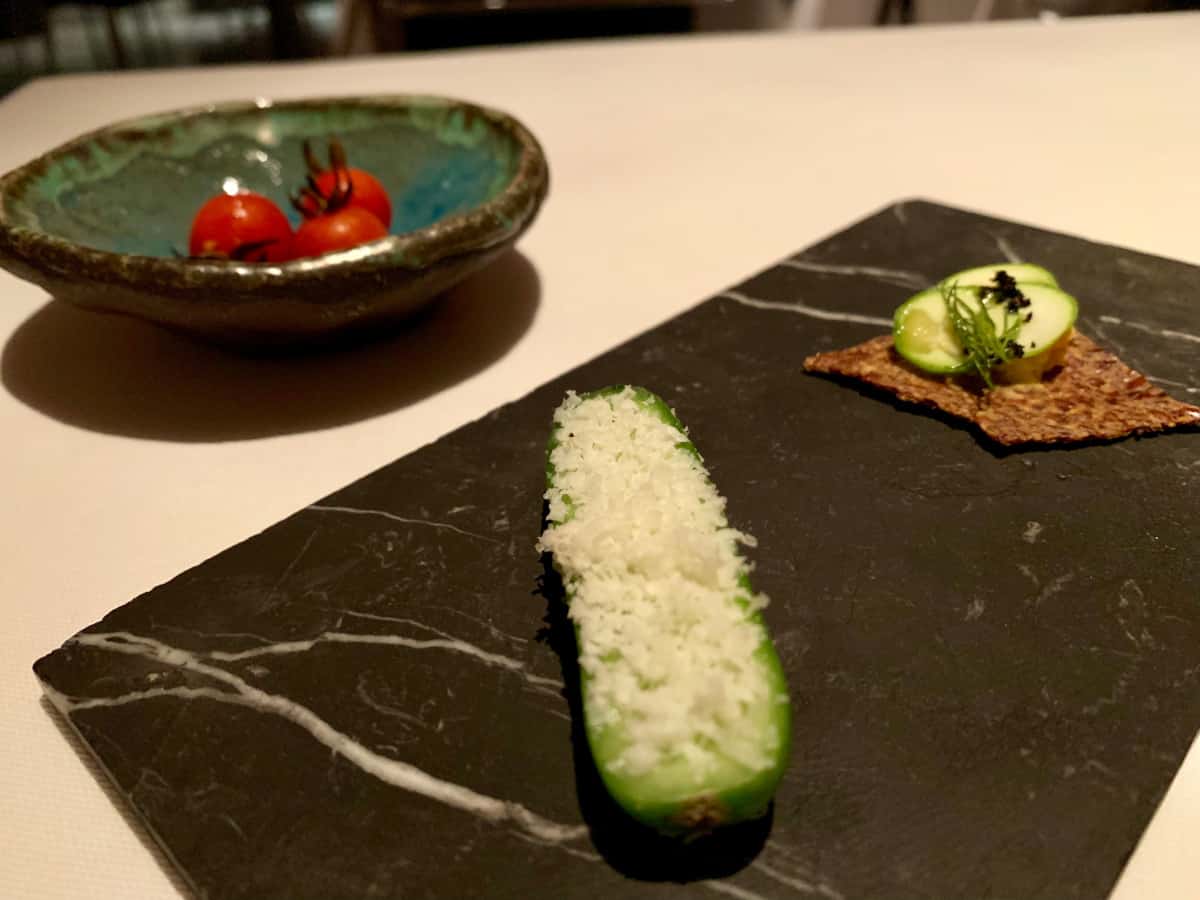 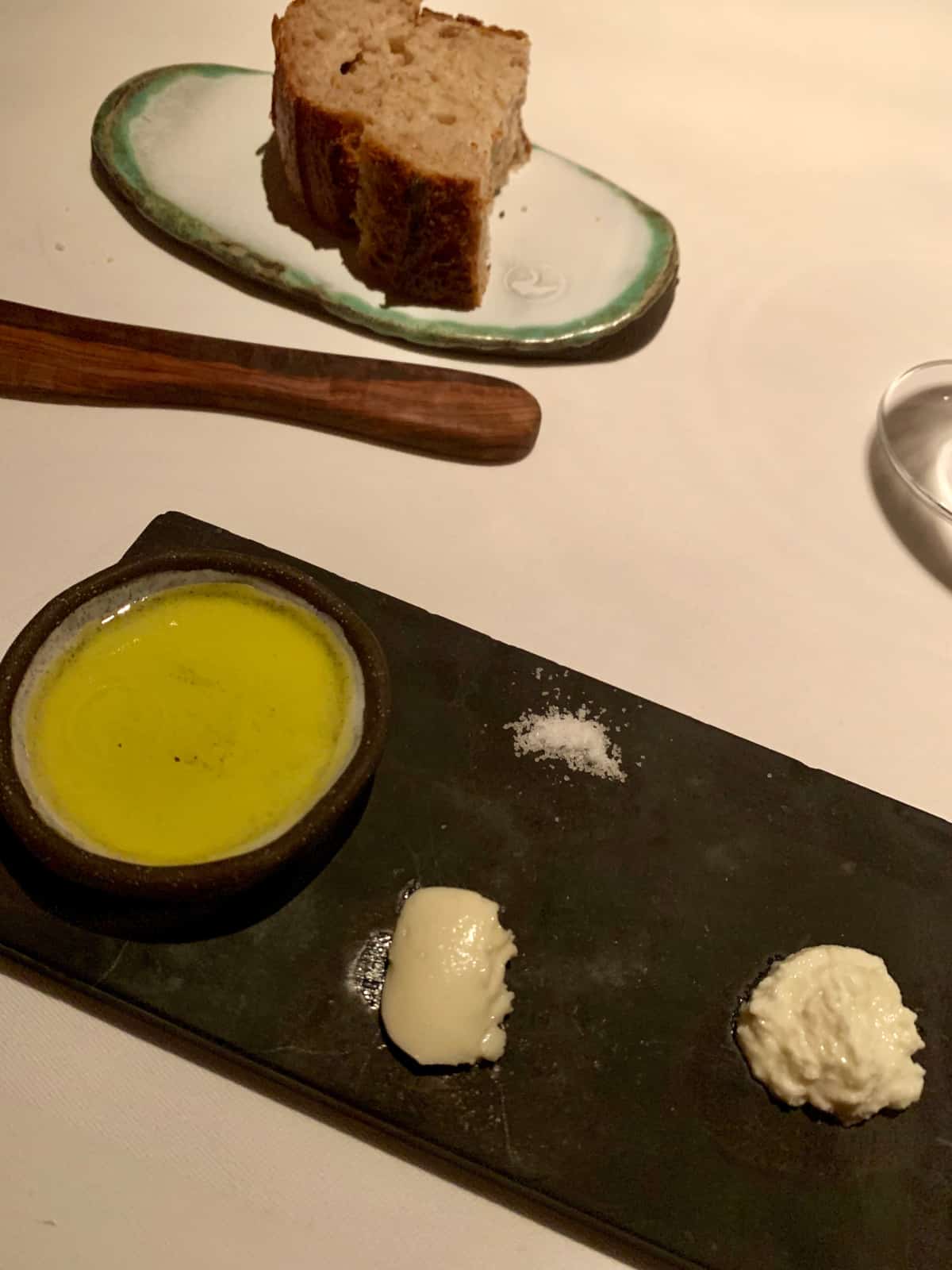 This was another of the complimentary starters, and it was fascinating and delicious.

The food overall was really good.  My only issue was that my waiter was not terribly helpful or present…I’d hoped for some extra information on some dishes, a bit of added conversation to help me decide or even just to provide background on the dishes (something that’s common at nice restaurants) but I couldn’t get his attention most of the night.  Not sure if it was because I was a single person dining, rather than a couple? 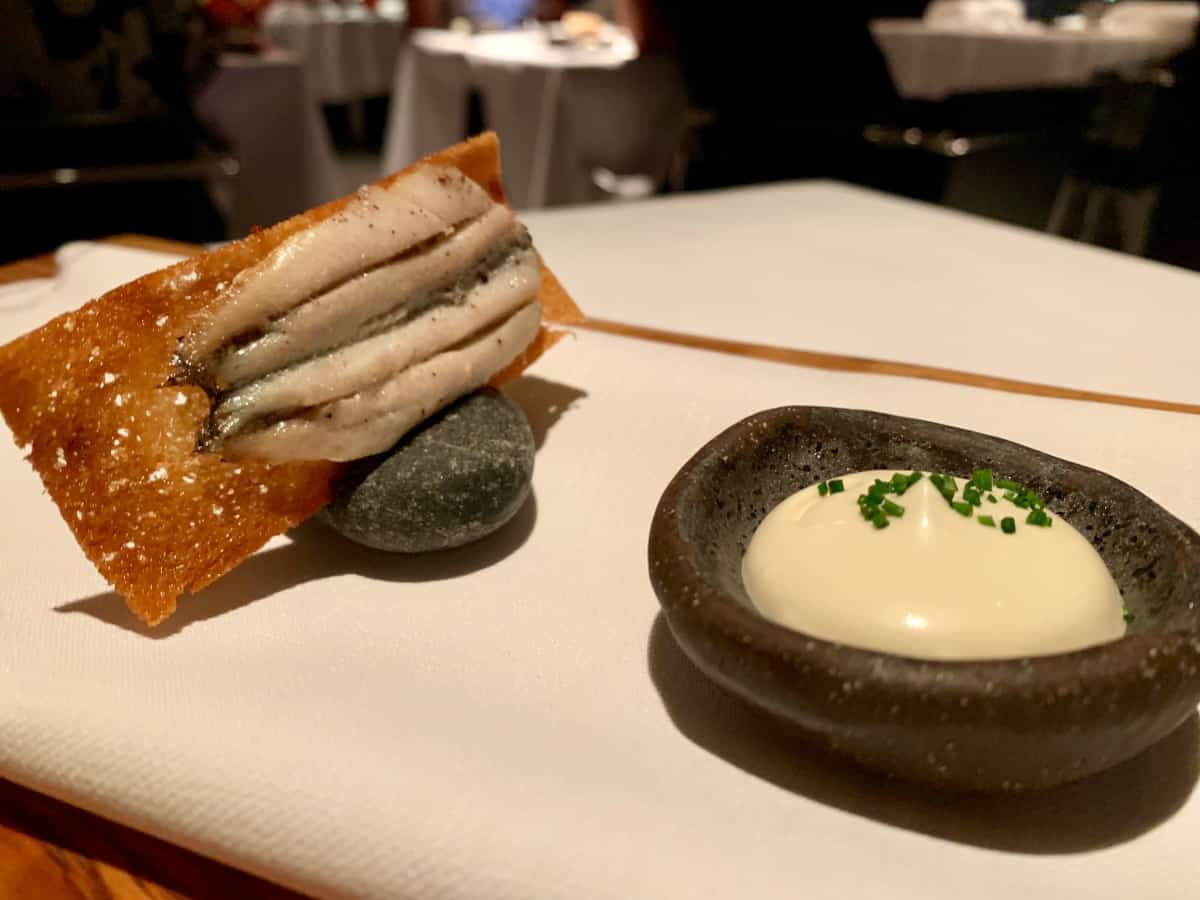 Then onto course one.  I got the duck, with cool wrinkly sponge mushrooms, dried apricots, potato, and sour pomegranate.  It was paired with a red wine called Plato that was like a really good pinot noir.  The duck and apricots were delicious, though the mushrooms were a bit bitter.

Next up was the braised lamb with walnut paste, peas, and a creamy cheese (kind of like sour cream).  It was paired with a  great in-your-face Chamblija red, like a super Tuscan, perfect with the short rib-like dish. 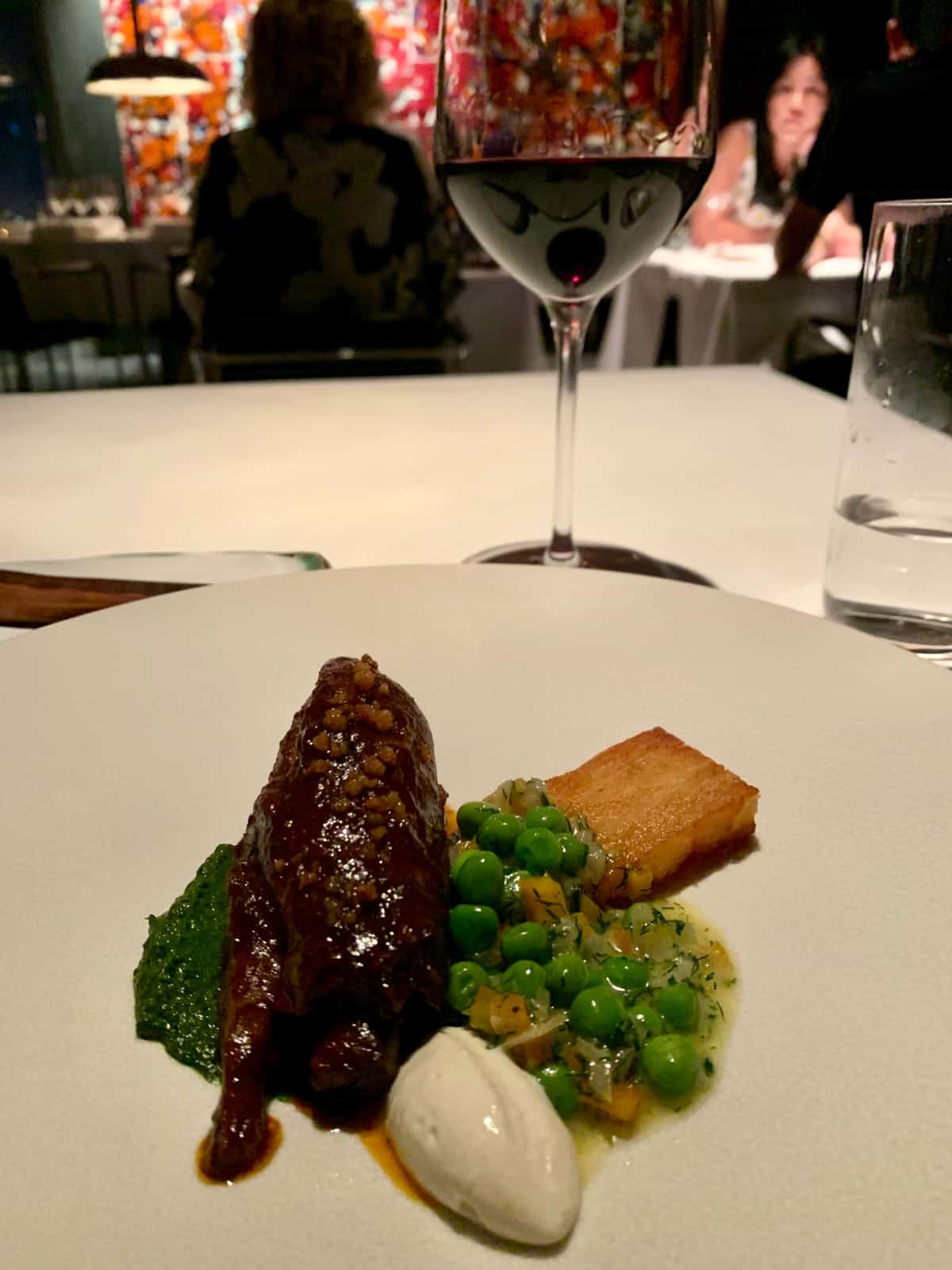 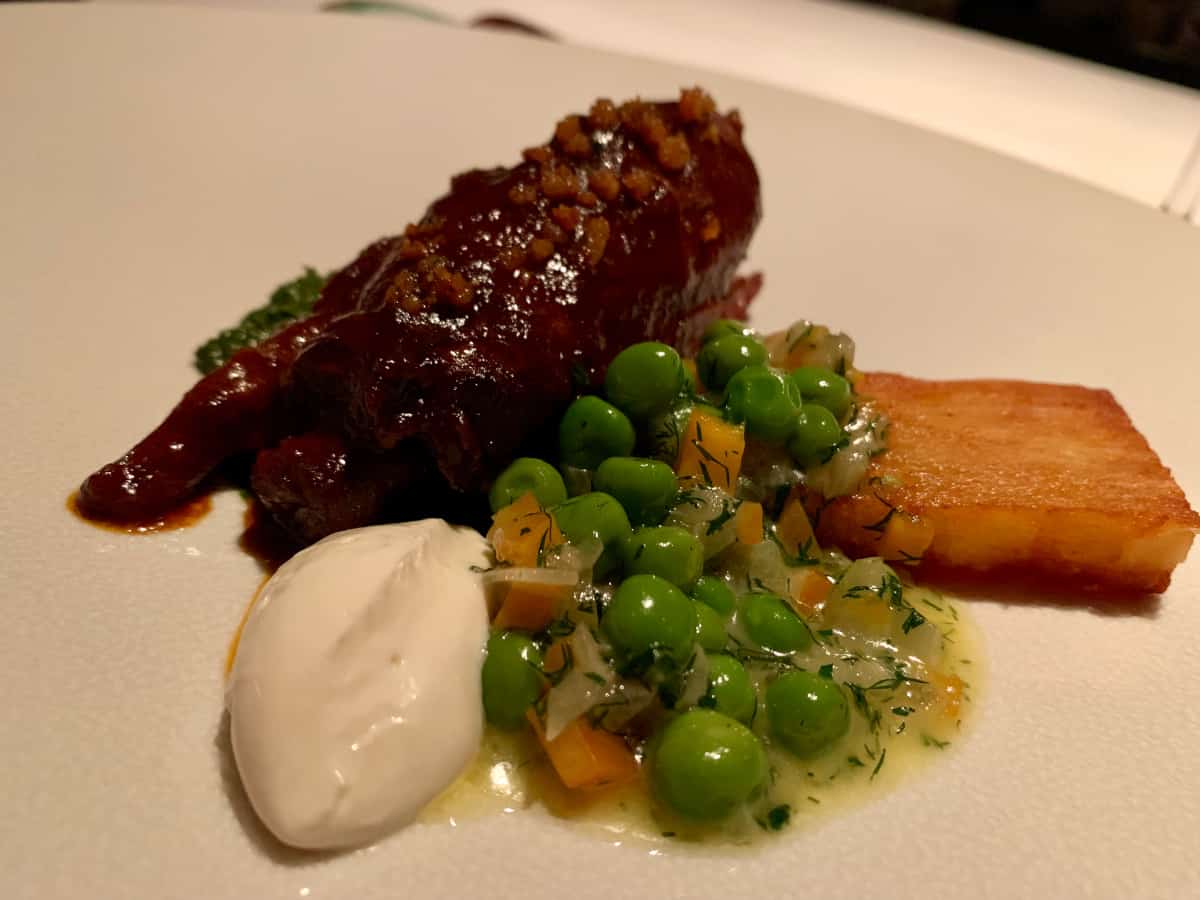 Finally I settled on my dessert—which was so hard!  Mikla has some super interesting desserts (I’ve included the menu below).  I ended up choosing the buffalo yoghurt with zile molasses, mint, walnut crumb, and strawberry sorbet.  I loved the Sevilen dessert wine that was paired with it, a Late Harvest Muscat. 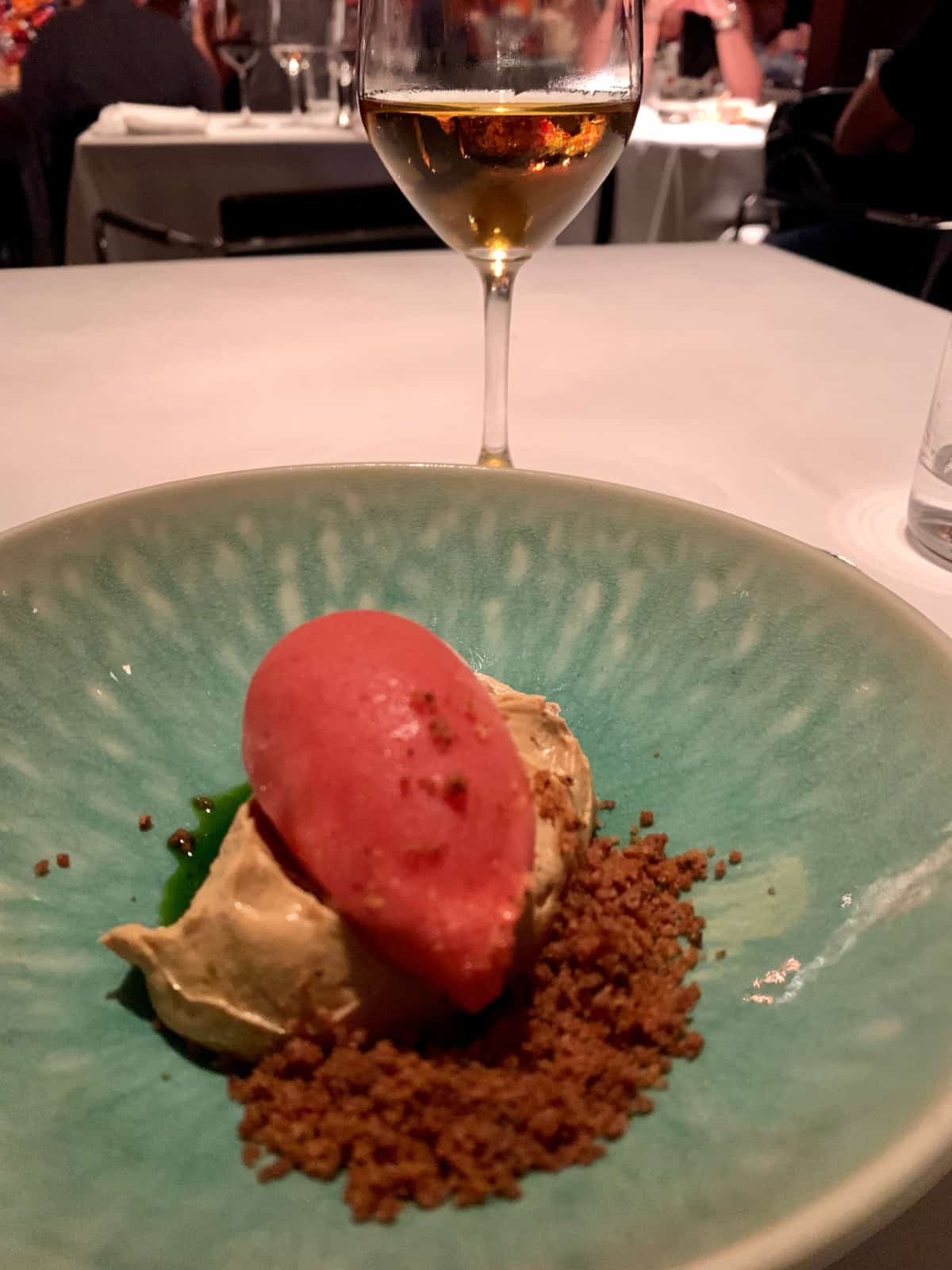 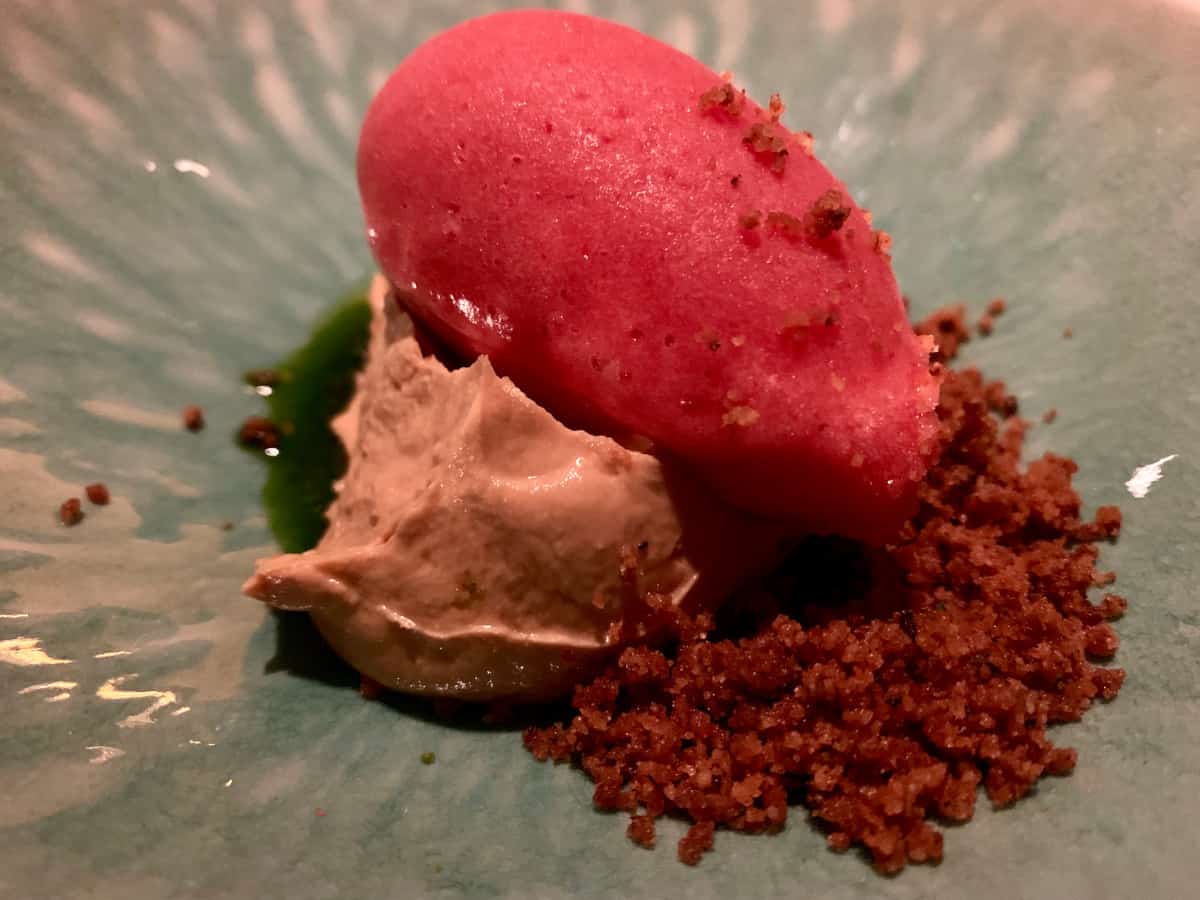 I was also cracking up at the description of this other dessert…intense strawberry and “antep birdshit pistachio”???  I don’t even know where to start with it, but sounds legendary 🙂 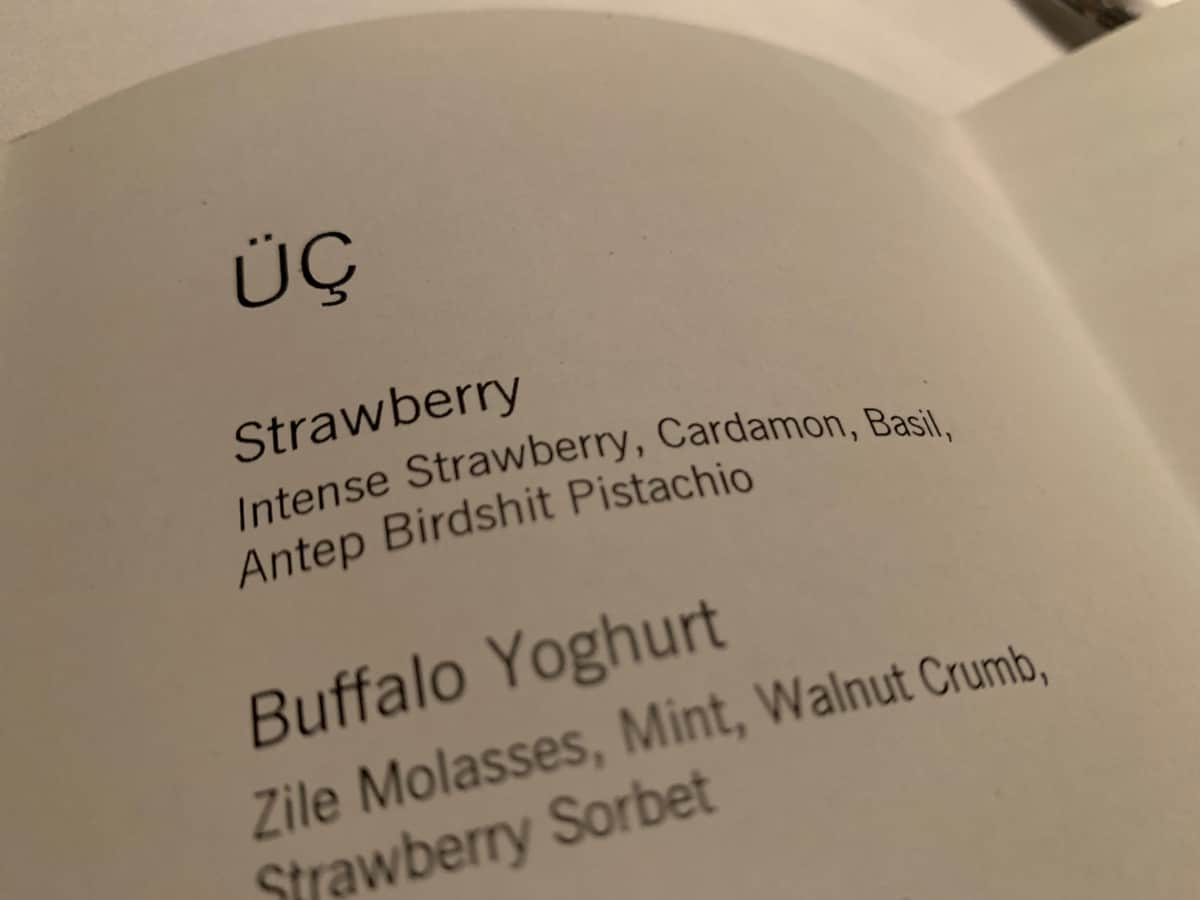 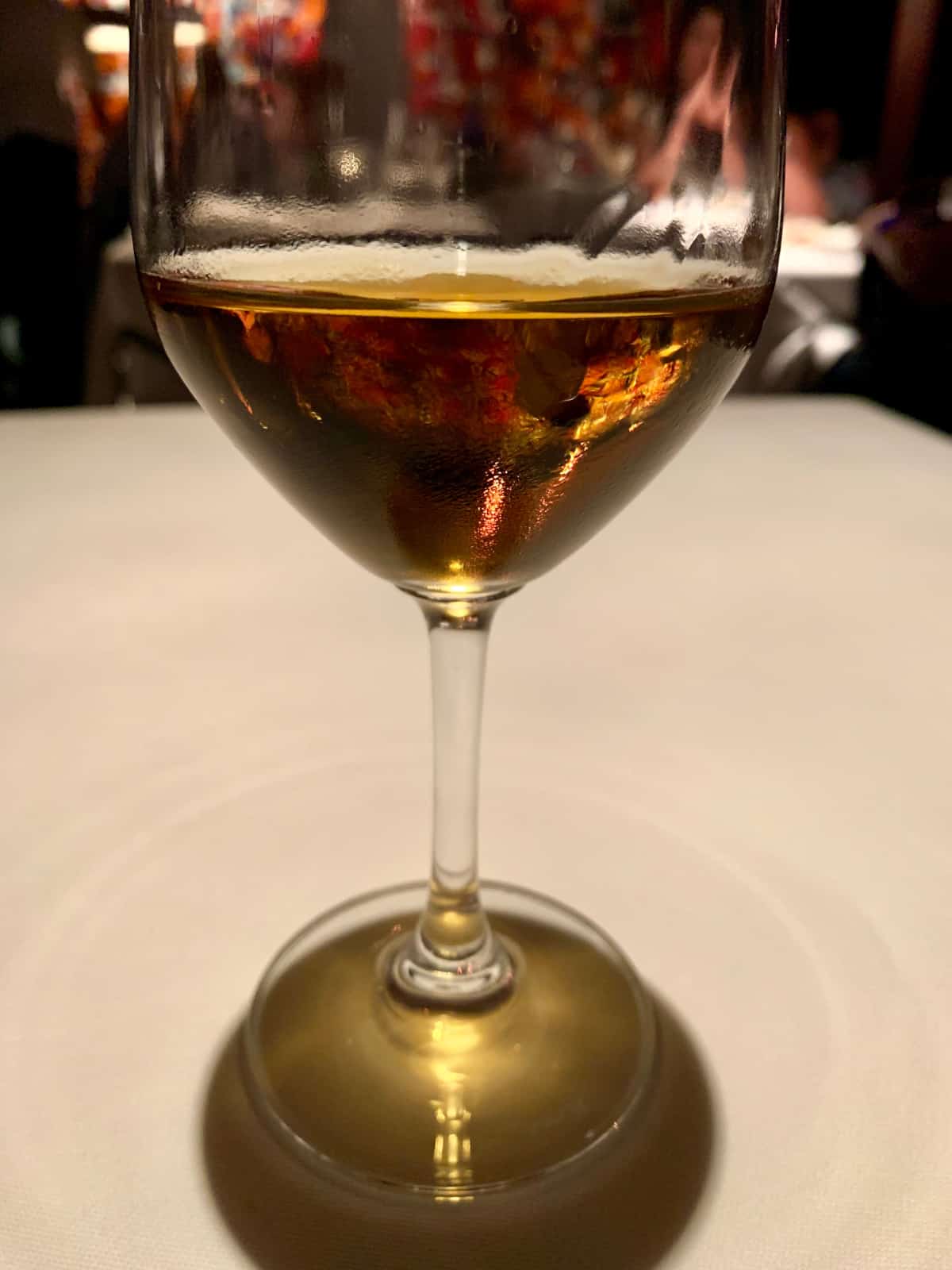 Here’s the whole Mikla Restaurant menu from that night.  You can see how interesting the different dishes are! 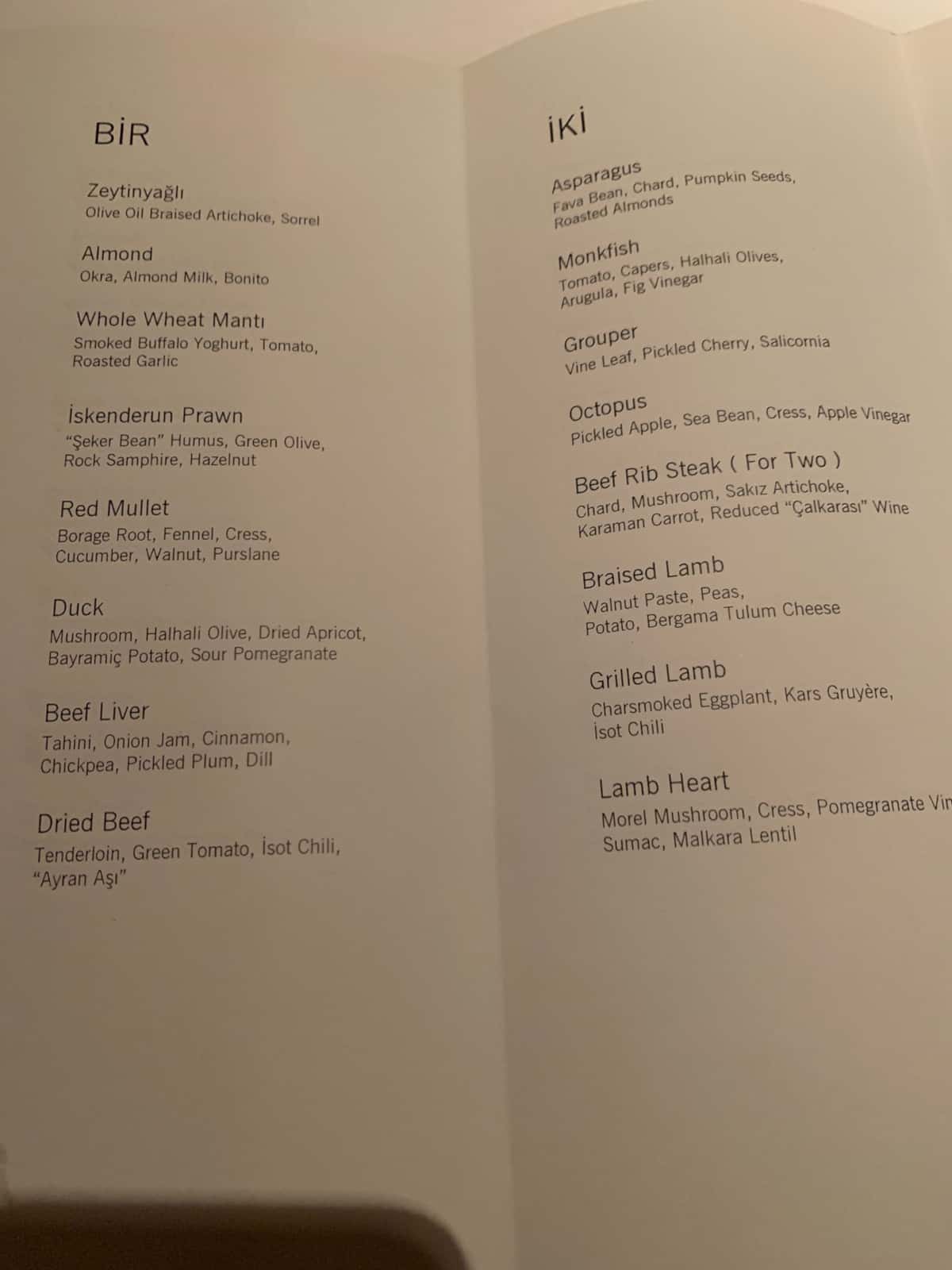 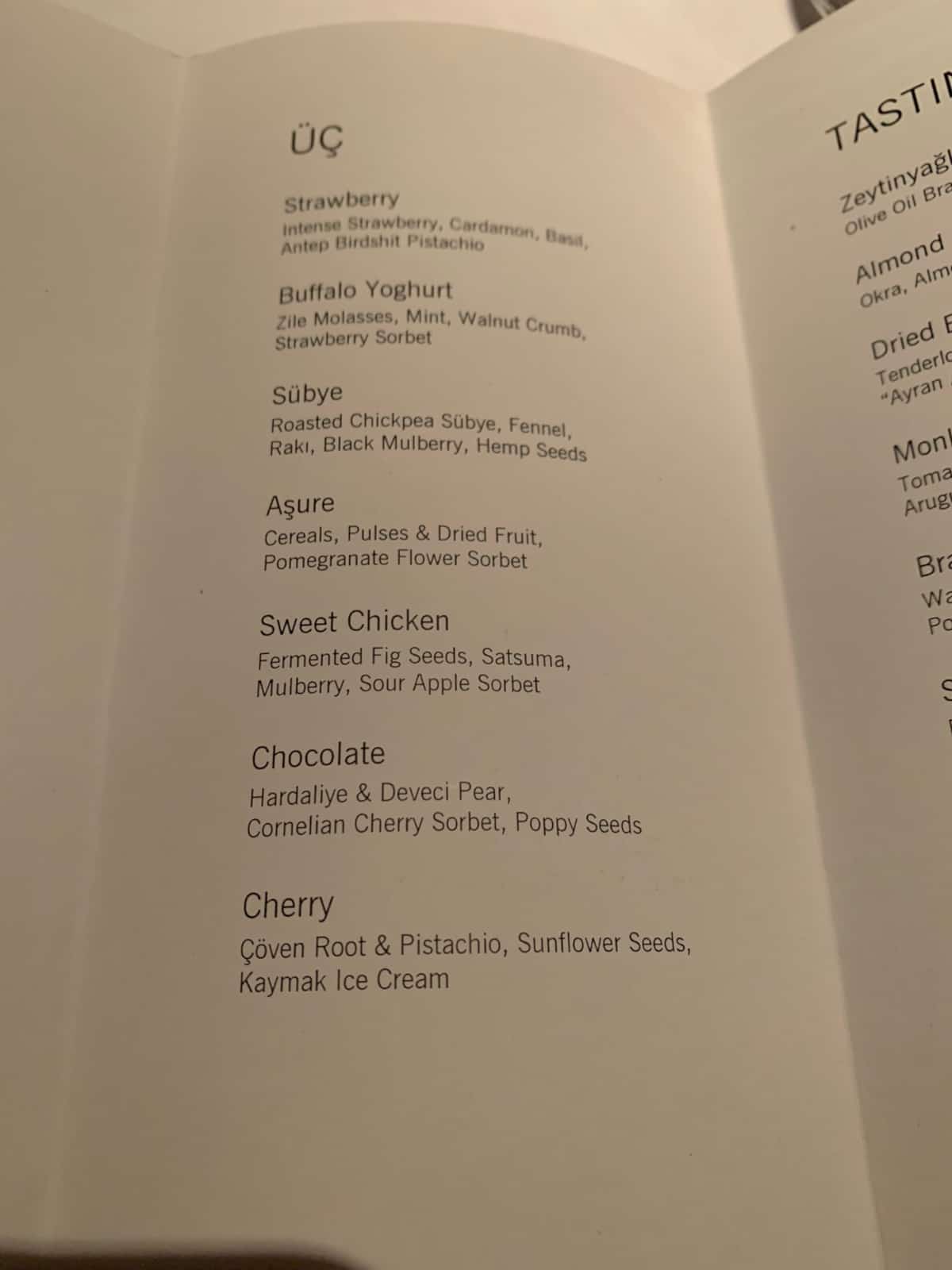 So it was definitely an interesting experience eating at what’s considered one of the world’s top restaurants!  If you’re looking for a special night out in Istanbul, Mikla should definitely be on your list (and you can make reservations on their website, which is super helpful). 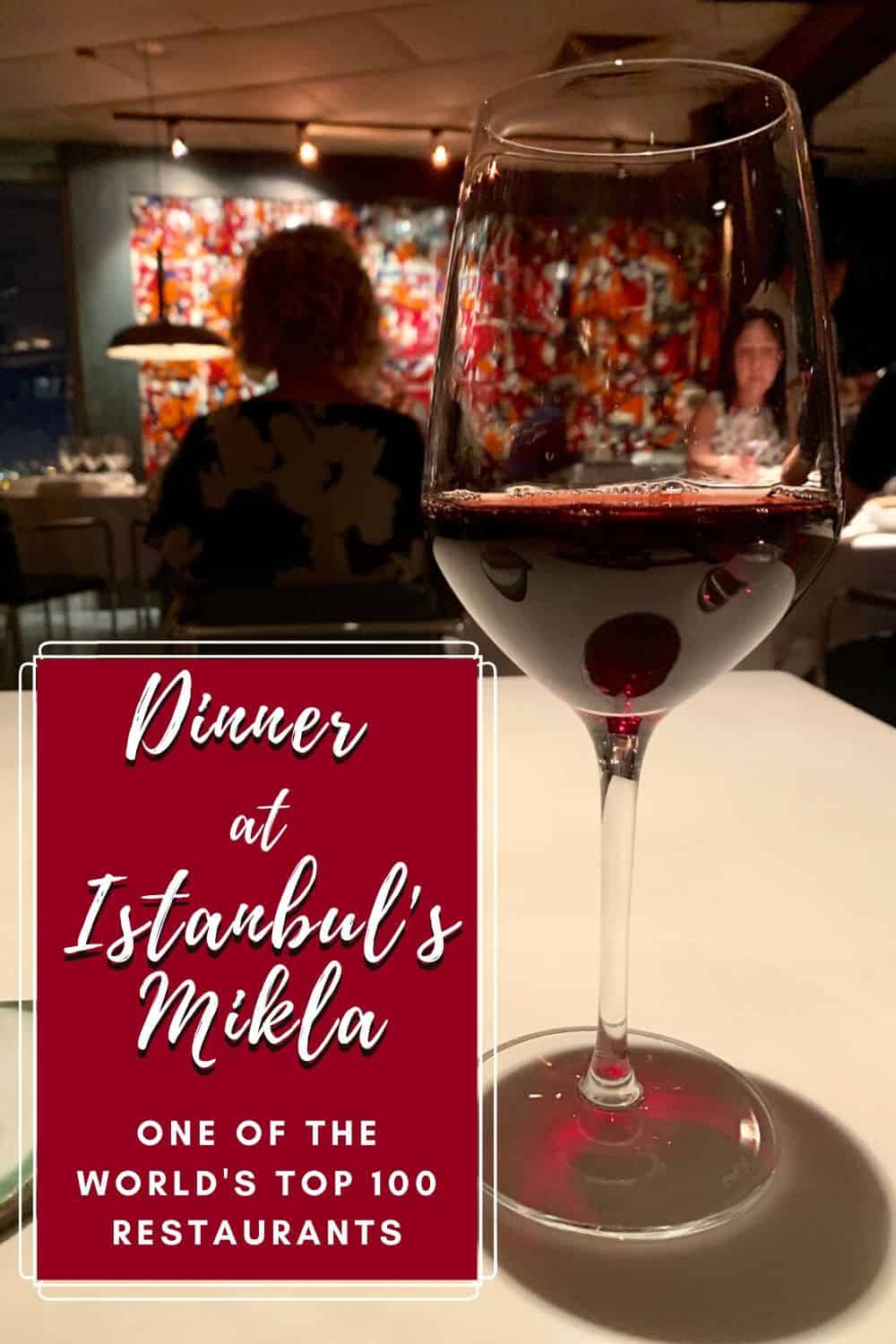 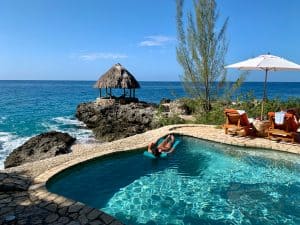 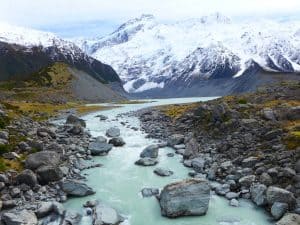