Cider Making & ‘Keeving It Real’ In The Boyne Valley, Ireland 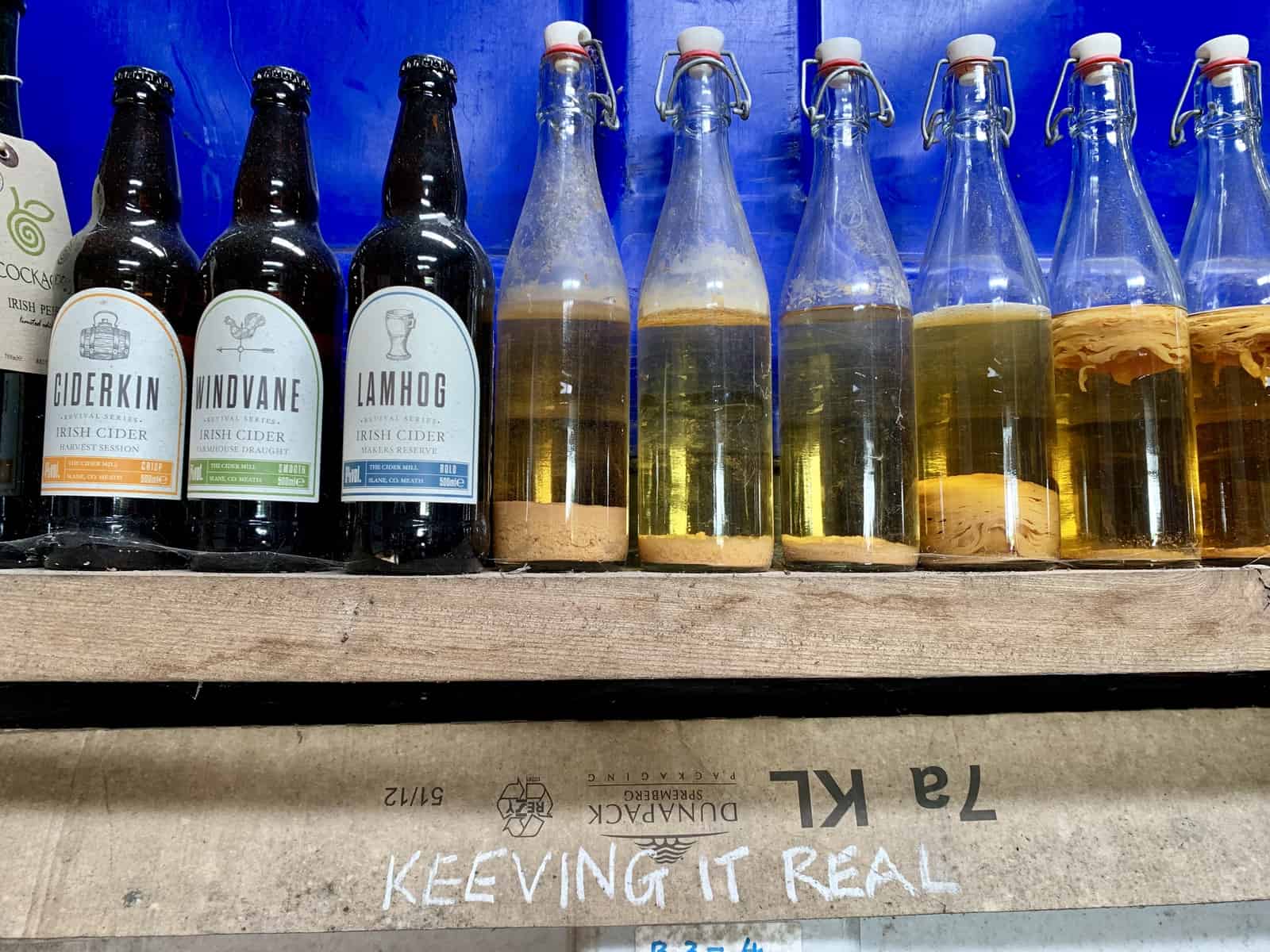 Some of the neatest experiences you can have in life (whether travel-related or not), are when you get a chance to hang out with someone who is incredibly passionate and knowledgeable about something and learn from them.

So I was super stoked to hang out with Mark for an Irish cider tour from The Cider Mill (@thecidermillslane) near Slane, County Meath, Ireland…he’s reviving ancient cider-making traditions and fermenting up the best cider you’ve had! 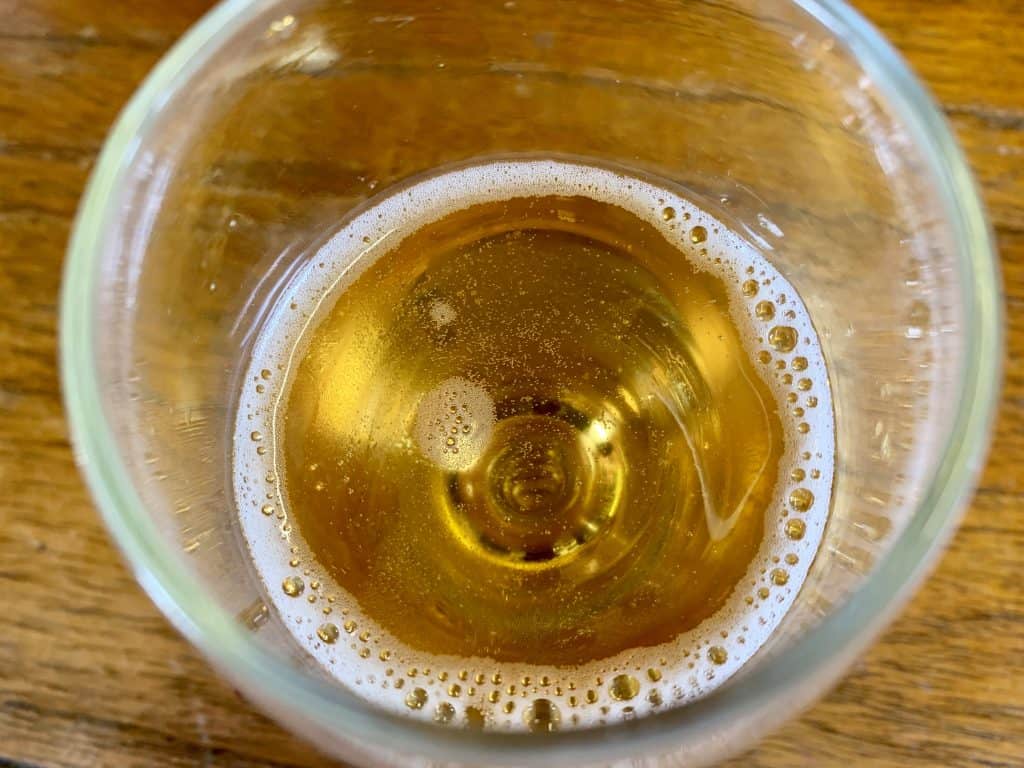 This is Donkey.  He/she has epic side-eye, and loves a nose rub 🙂 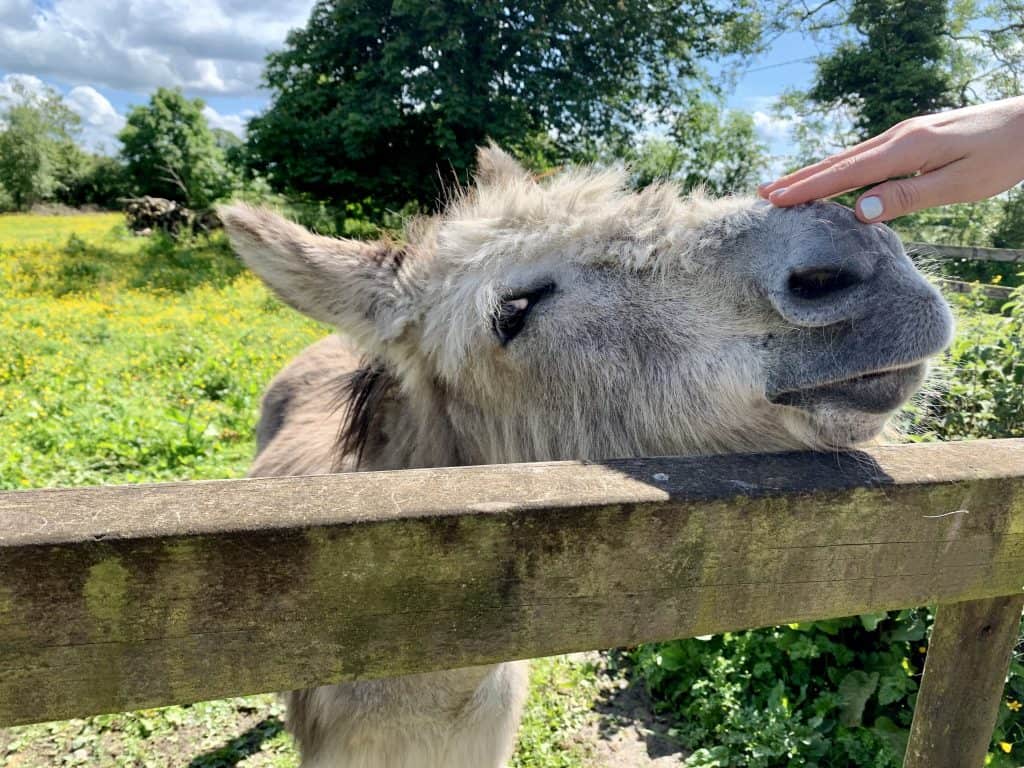 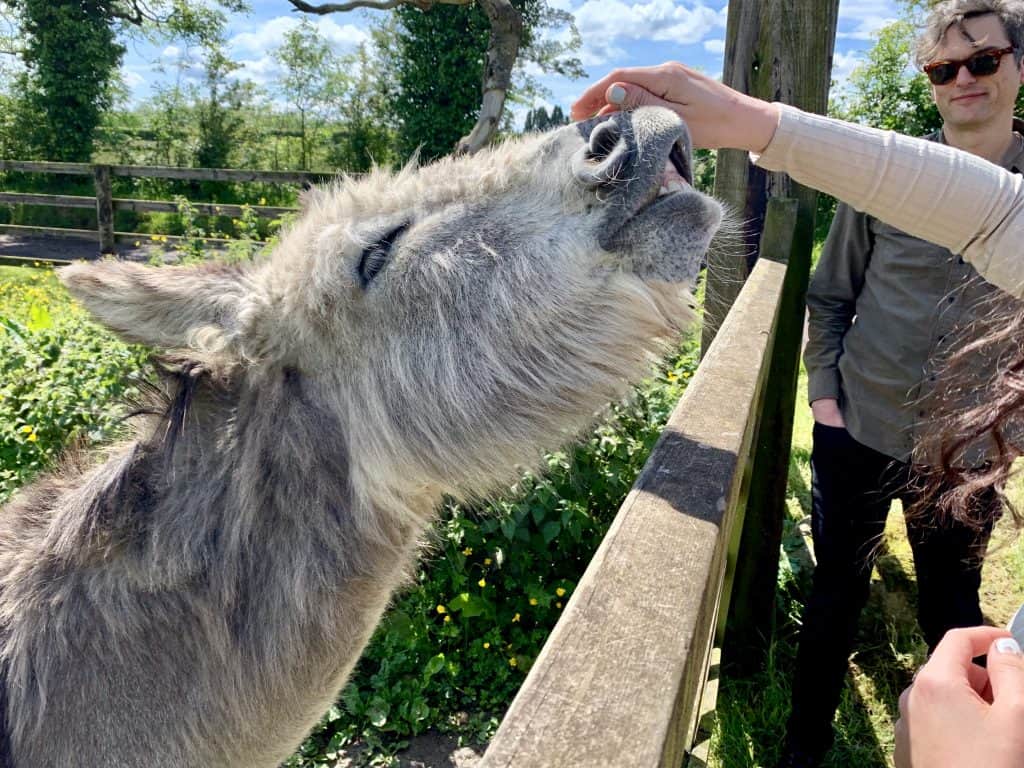 Must-Stop on a Roadtrip: Clonmacnoise Monastery

We met Mark at his family’s home, where he has a shed for the cider making in the back.  He took the time to show us around the property a bit and talk about how the different farmers and property owners in the area stay connected with each other.

Mark shared a bit about how he got started making cider (it wasn’t his first career, by far!).  His Cockagee cider won Best Irish Drink last year, and is notable as being the only cider in Ireland made using the ancient keeving process, a purely natural fermentation.  More on that in a bit! 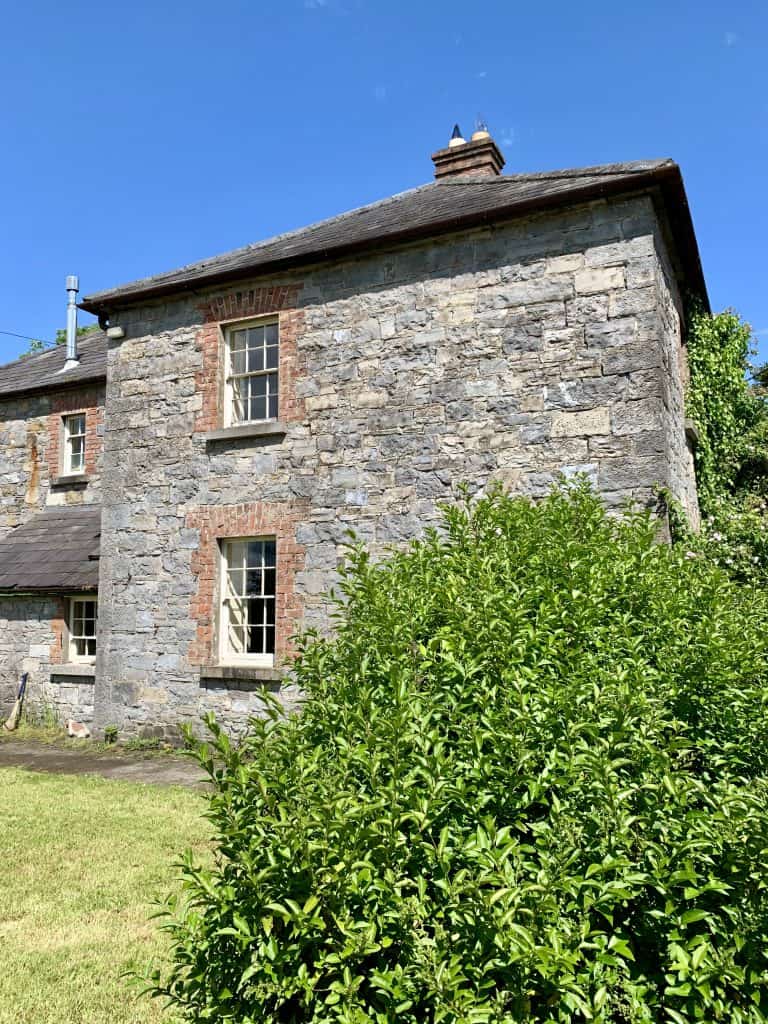 Our cider tour started by spending some time in the shed where he makes everything, from start to finish.  In general, cider making involves three stages:  crushing the fruit, pressing out the juice, and allowing it to ferment.  There’s no brewing involved—the process looks more like that of champagne than beer.

Beyond this millennia-old process, though, there are dozens of variables that cider makers can choose.  From the types of apples to the fermentation to the machinery, there’s a lot of room for experimentation in the craft.

It was amazing to get this type of Irish cider tour, because most of the time you’ll be in a big commercial facility—a very different experience! 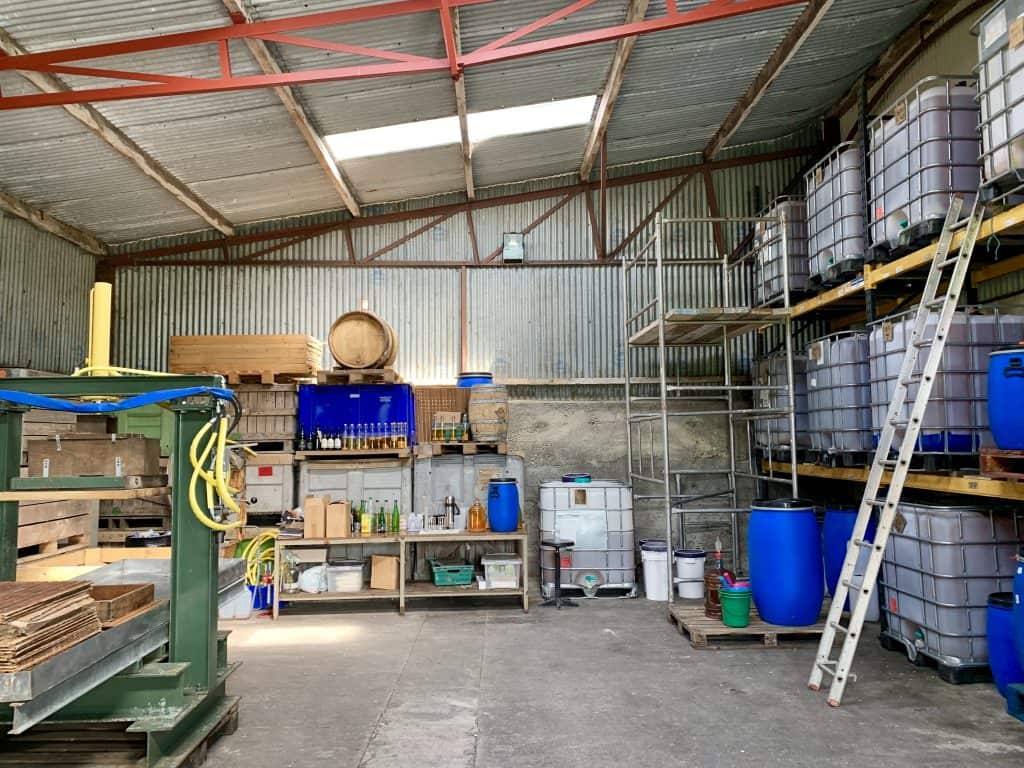 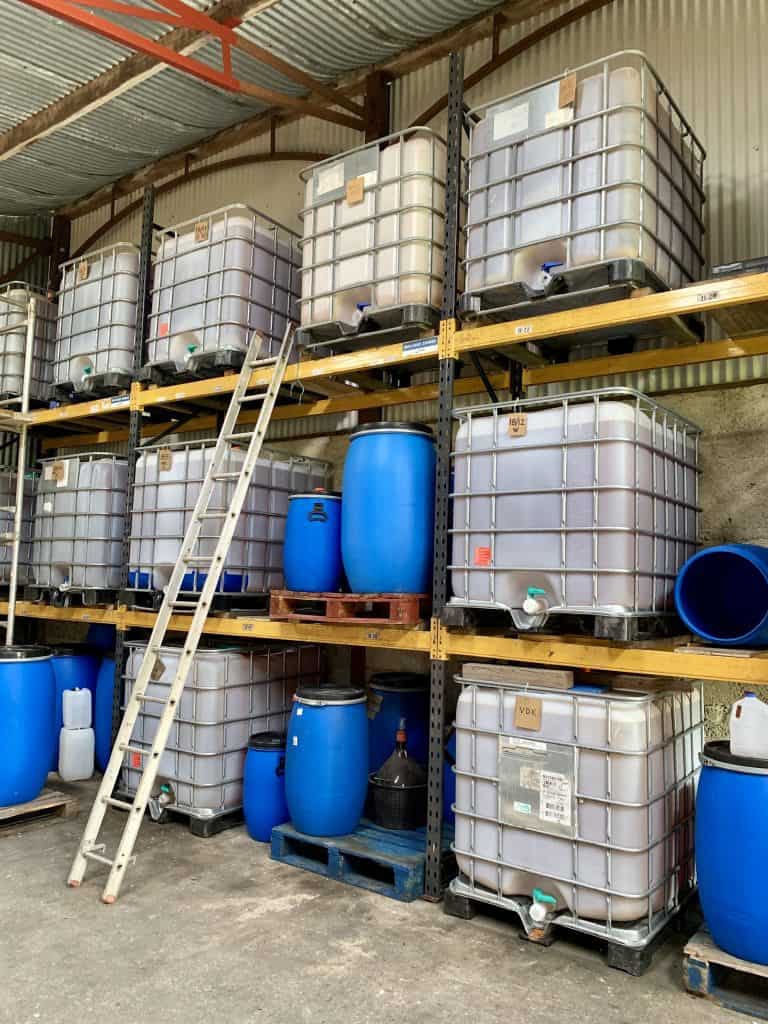 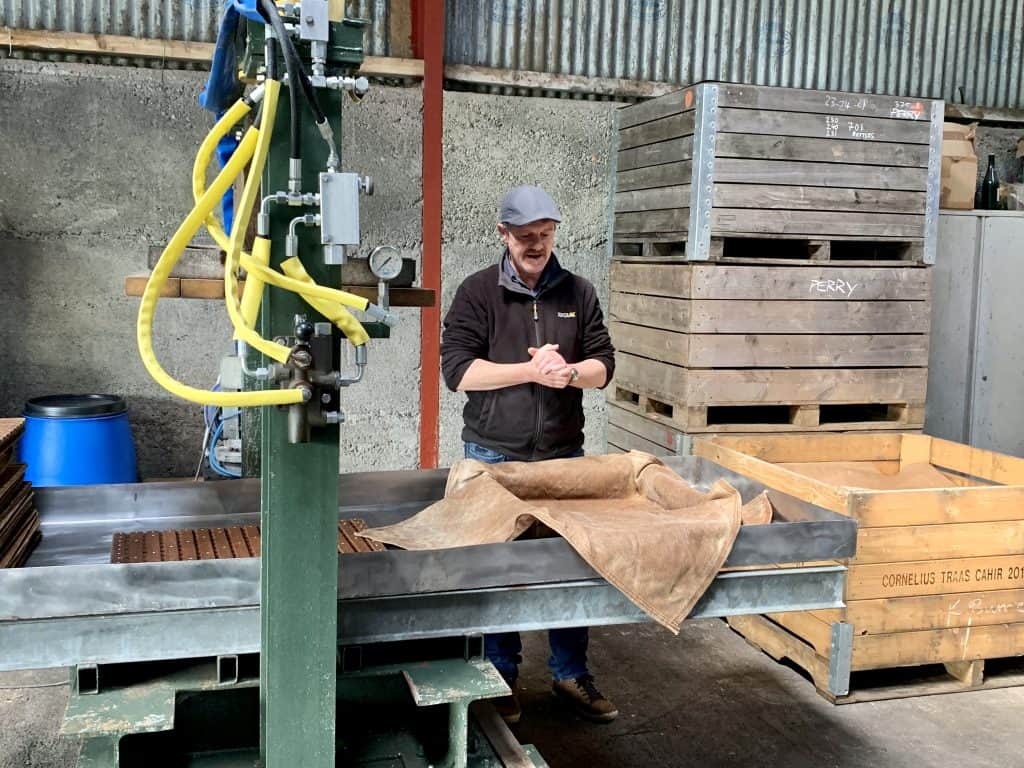 What is keeved cider?

Then we learned how they’re “keeving it real” (LOL never gets old).  Keeving is a process used to make naturally sweetened cider.  For this type of cider, you can only use cider apples (not eating ones, or a mixture), and the apples are first pressed to get the juice out—absolutely nothing else is added (no sugar, no water).

Natural wild yeasts eventually make their way into the juice to achieve the necessary fermentation.  Because this is all done totally naturally rather than adding yeast, this makes the total fermentation time for the cider 12 to 18 months, rather than the 3-6 weeks that’s normal.

Over the course of time the pectin in the juice makes almost a gelatin that rises to the top (it reminded me of my kombucha scoby).  This is such an interesting and rare process…while most of the French ciders are keeved, Mark is the only one in Ireland doing it right now (and only with the Cockagee cider, not his other ones). 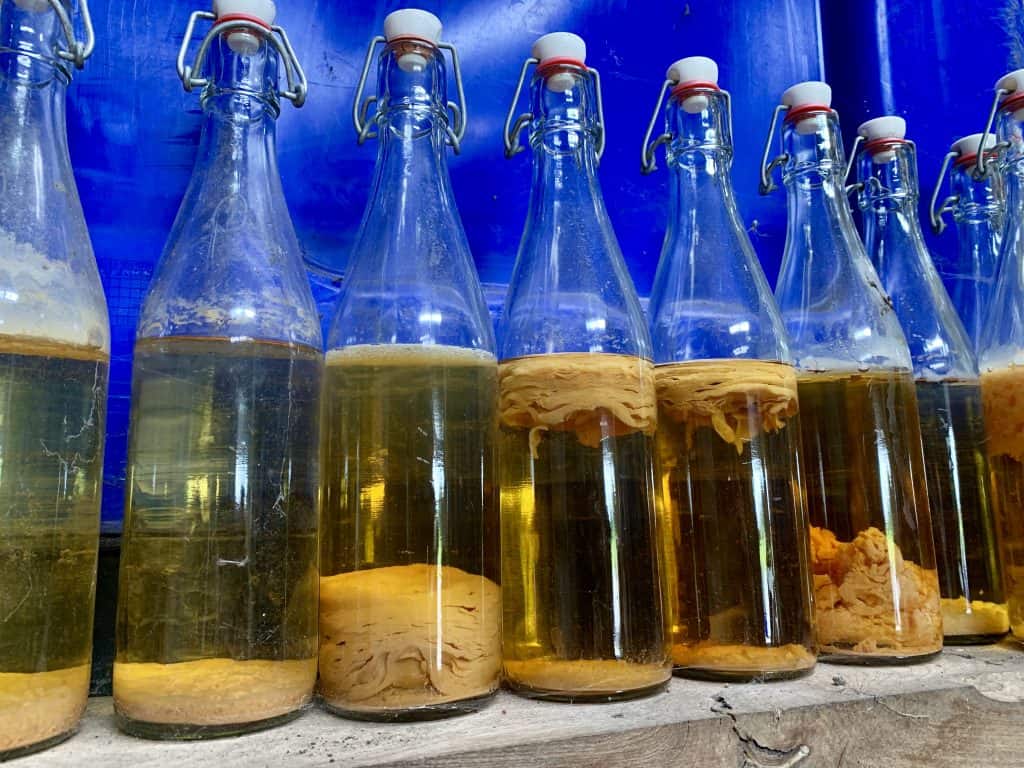 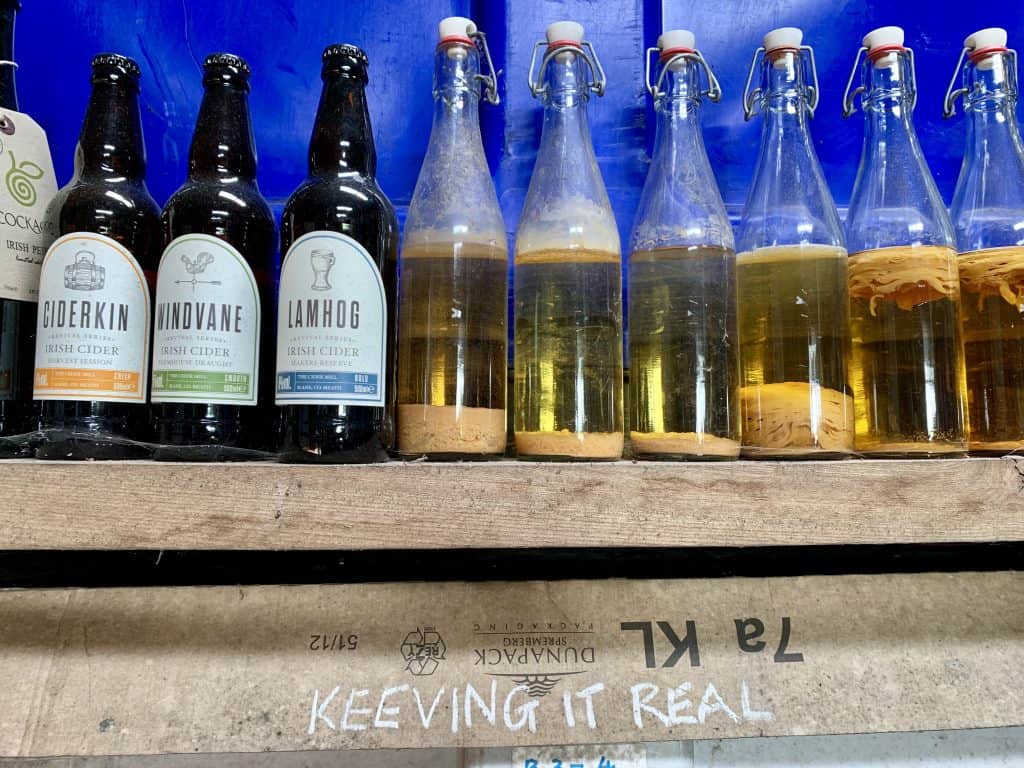 After learning all about keeving, we went into the little tasting shed and Mark took us through several different cider versions he makes.

Ciderkin is the equivalent of “small beer”, using the second pressing (in old time-y days this was used as laborer wages).  His is (if I’m remembering correctly) around 4%, but historically this was even lower ABV.

My favorite fun fact according to Mark:  alcohol under 3-4% rehydrates your body, vs. dehydrating it… #themoreyouknow 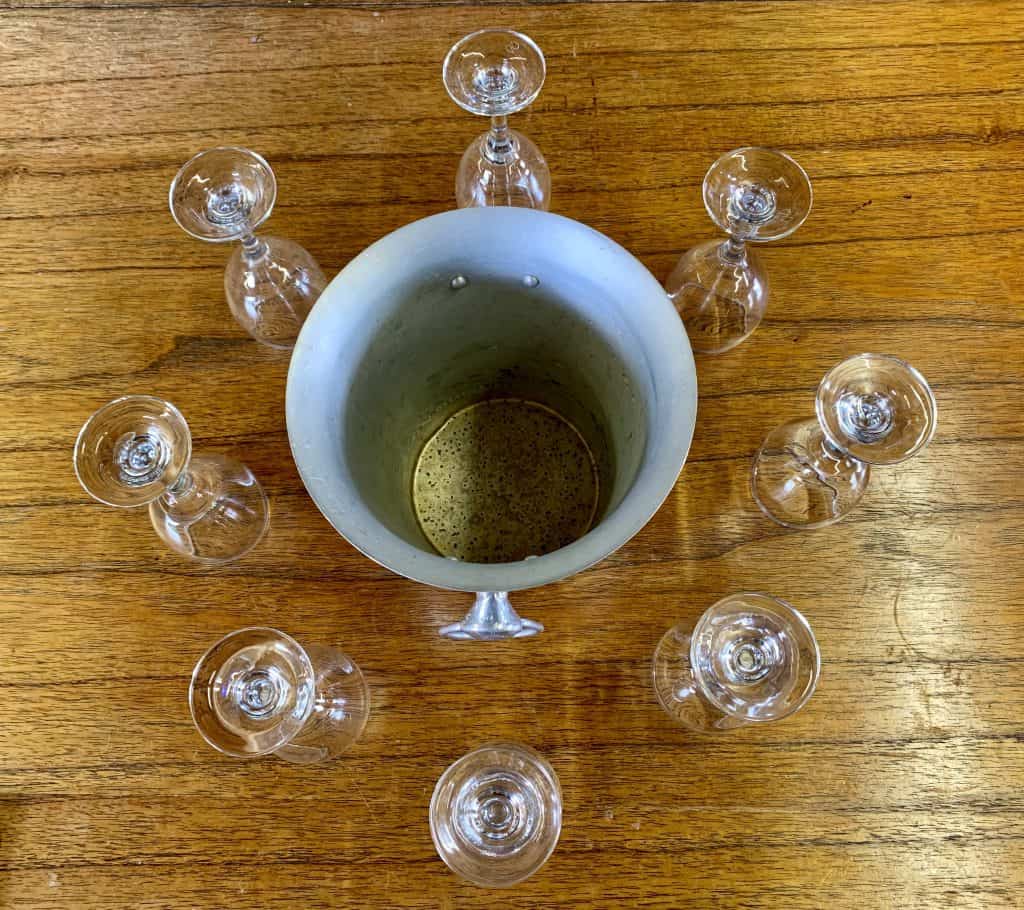 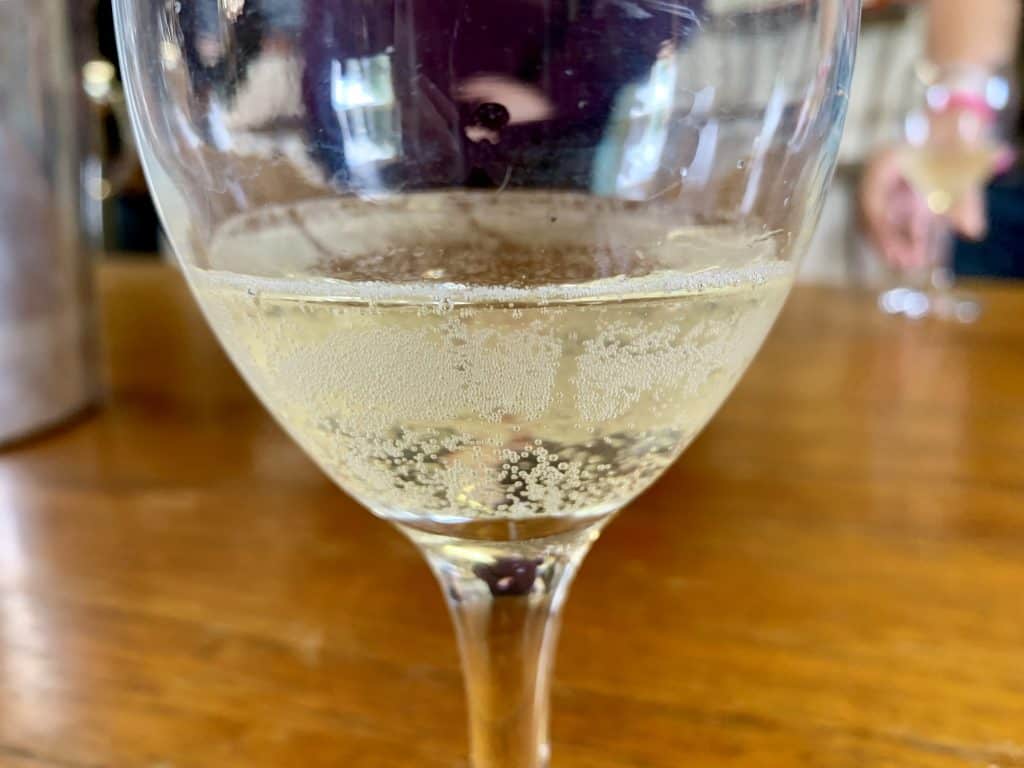 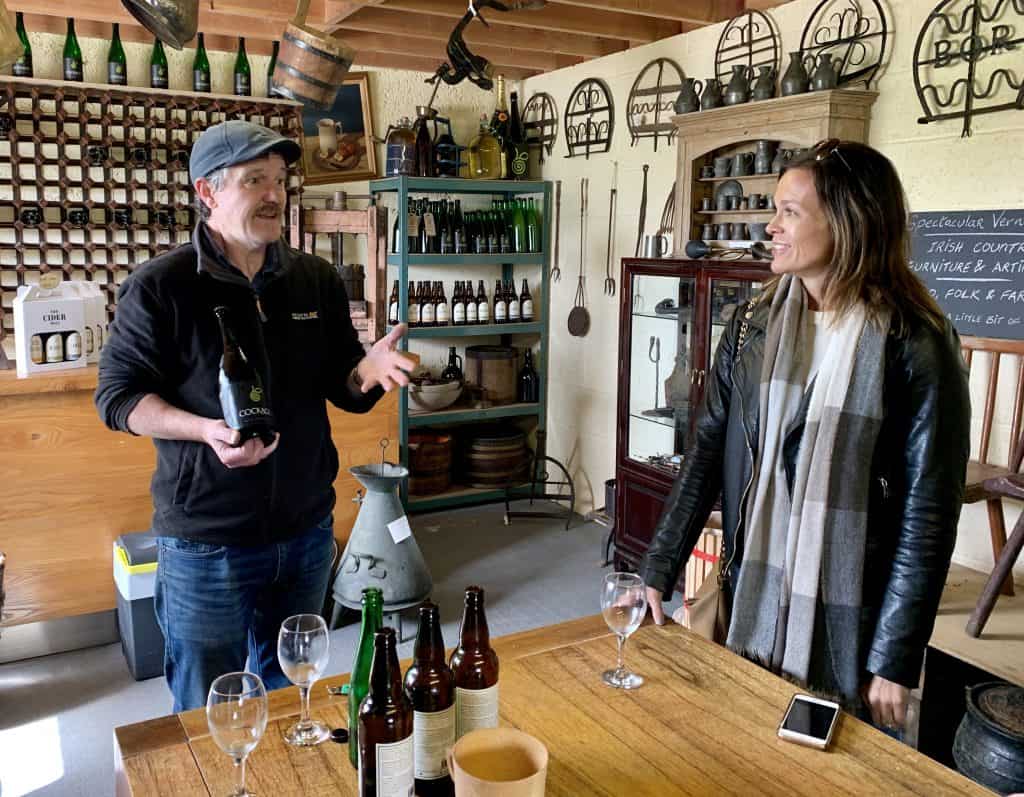 We then tried his Windvane (50/50 eating and cider apples) with “a little bit of funk in it”.  Then it was on to the Lambhog (little hand, pronounced “Lavohg” in Irish).  It’s 100% cider apples but not keeved, which is what sets it apart from the Cockagee cider.

Cider apples are full of tannin, the same as red grapes, and so this gives the cider a lot of body and dries your mouth out more than what many ciders will (because they’re made more with eating apples). 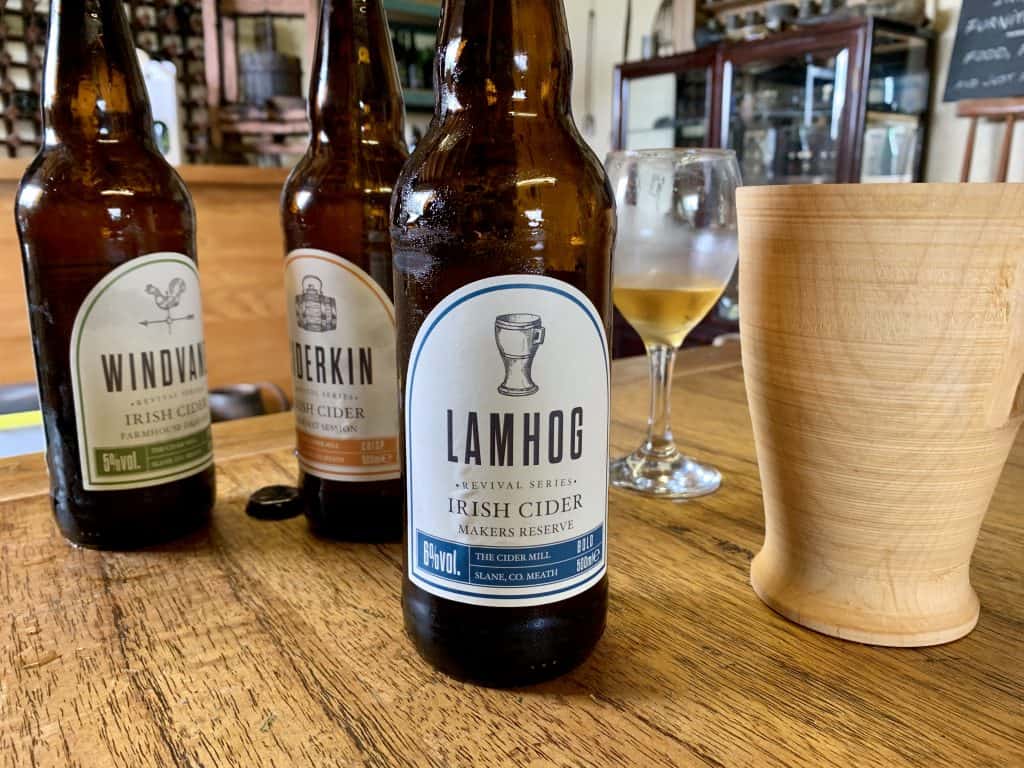 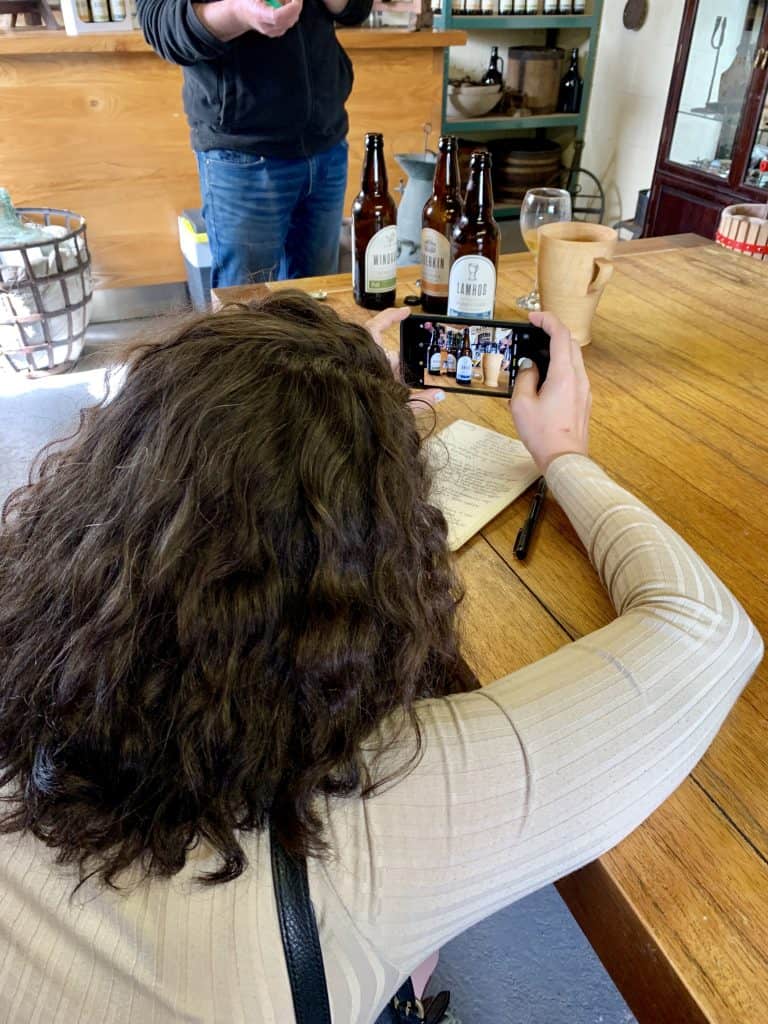 And then the glorious Cockagee (the name of the cider apple it’s made from…its named after the color of the apple which translates to “goose-shit green” in Irish).

This is 100% keeved and made from the cockagee apples, and is absolutely delightful.  It drinks like a really great sparkling wine, full of body and nuance and different flavors.  It’s amazing! 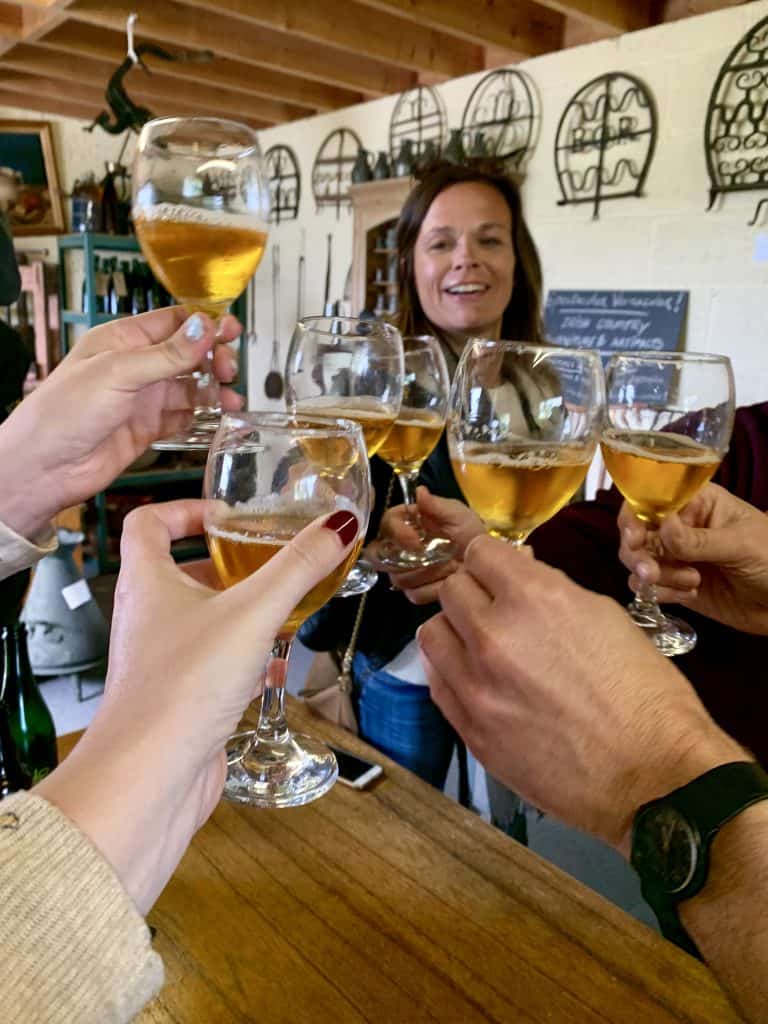 Check out nearby Slane Distillery & Castle while you’re here!

Cheers to that!  We also talked Mark into giving us a taste of his Perry (made from pears)…SO YUM.

If you’re wanting to see the cider making magic for yourself and get an Irish cider tour, you can reach out on Twitter at @cockageecider or on Instagram at @thecidermillslane, or call (their Google listing has the phone number).  It’s a small operation run by one person, but Mark can tell you whether a tour is possible.

Before coming to The Cider Mill, we spent the morning at Boyne Valley Farmhouse Cheese…you can read all about it (and GOATS!!!) here, or see my deeper post on what to do in the Boyne Valley area! 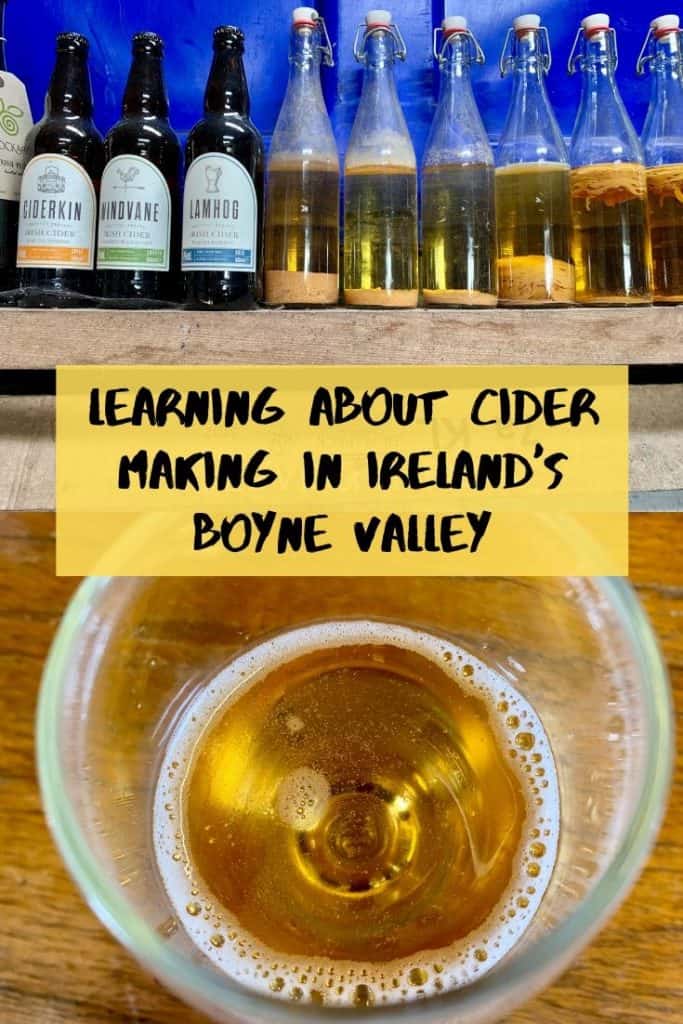 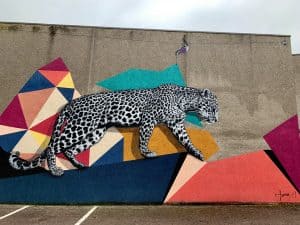