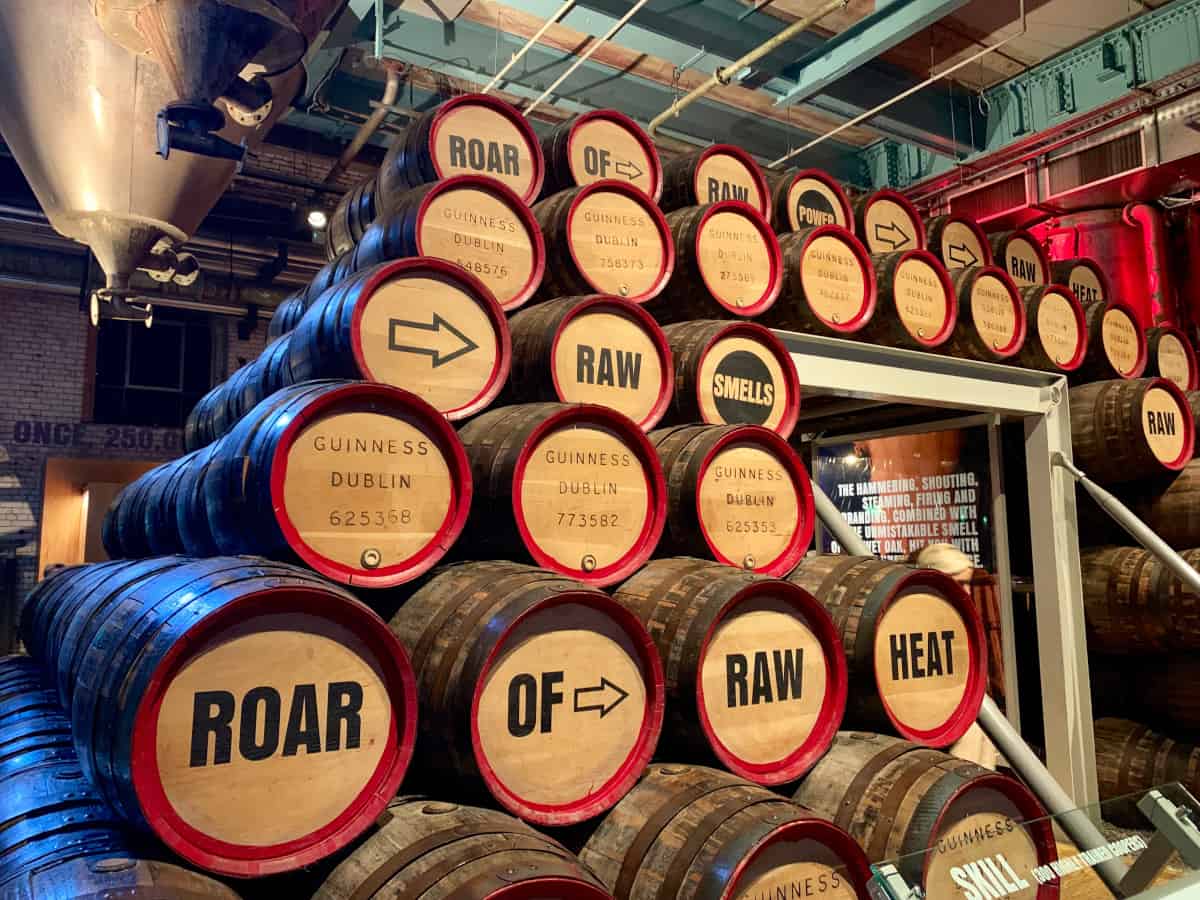 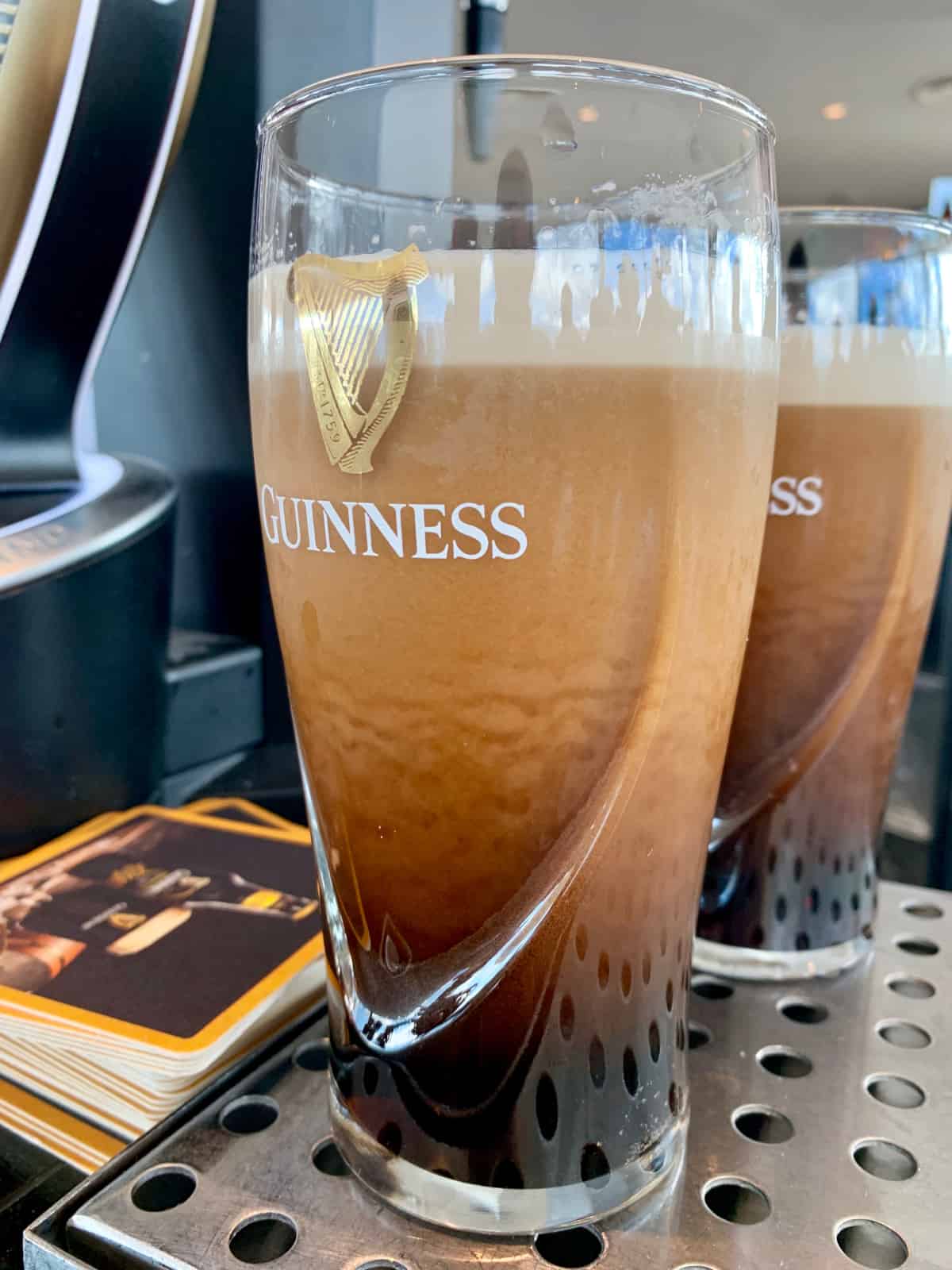 Ain’t she a beaut!!!  With over 1.7 million visitors in 2019, the Guinness Storehouse is the most-visited tourist attraction in Ireland.  And because of that, I was kind of unsure whether I wanted to visit…but on my last trip to Dublin I was too curious to resist.

The seven-story Guinness building, built in 1904, has been fitted into an educational, interactive, and fun sensory experience.  The whole place is a bit Disneyland-ish, quite the sensory overload and massive. 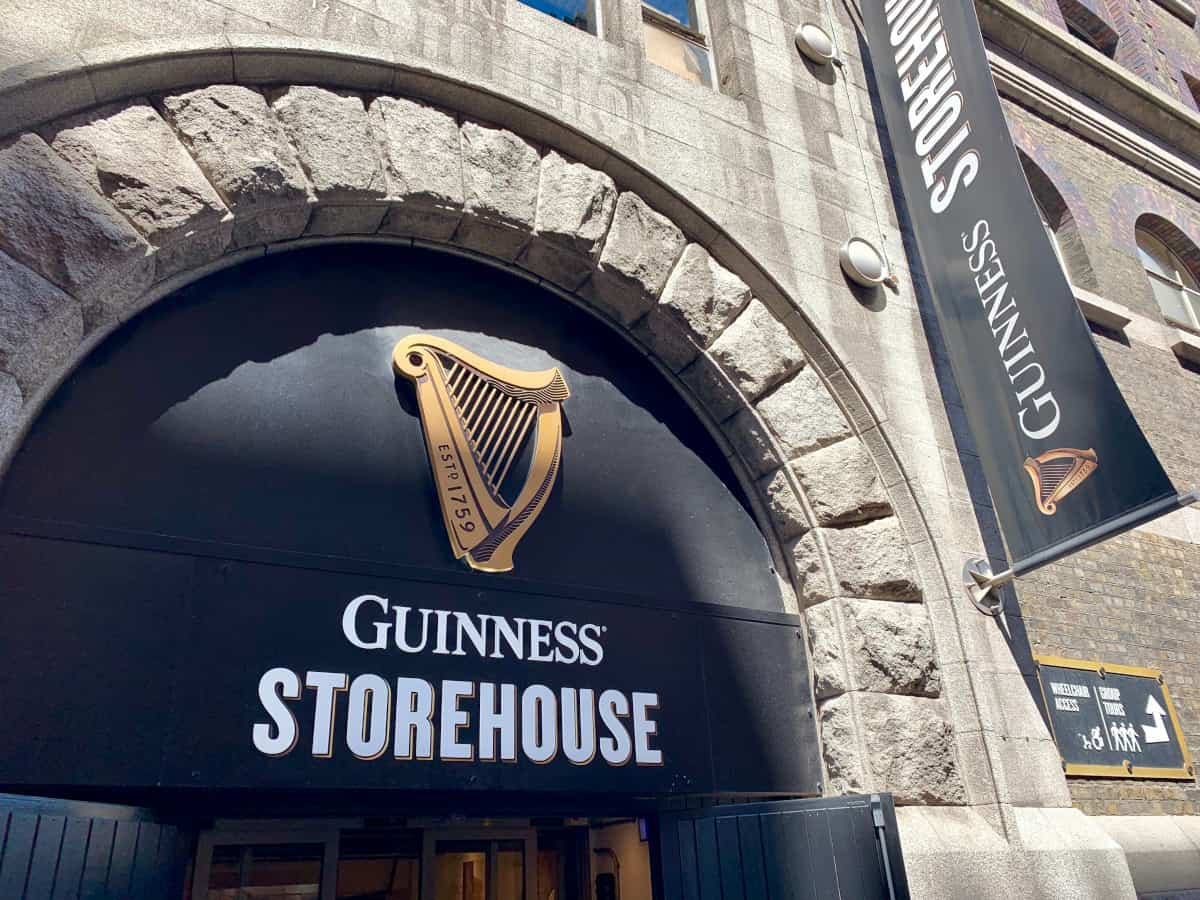 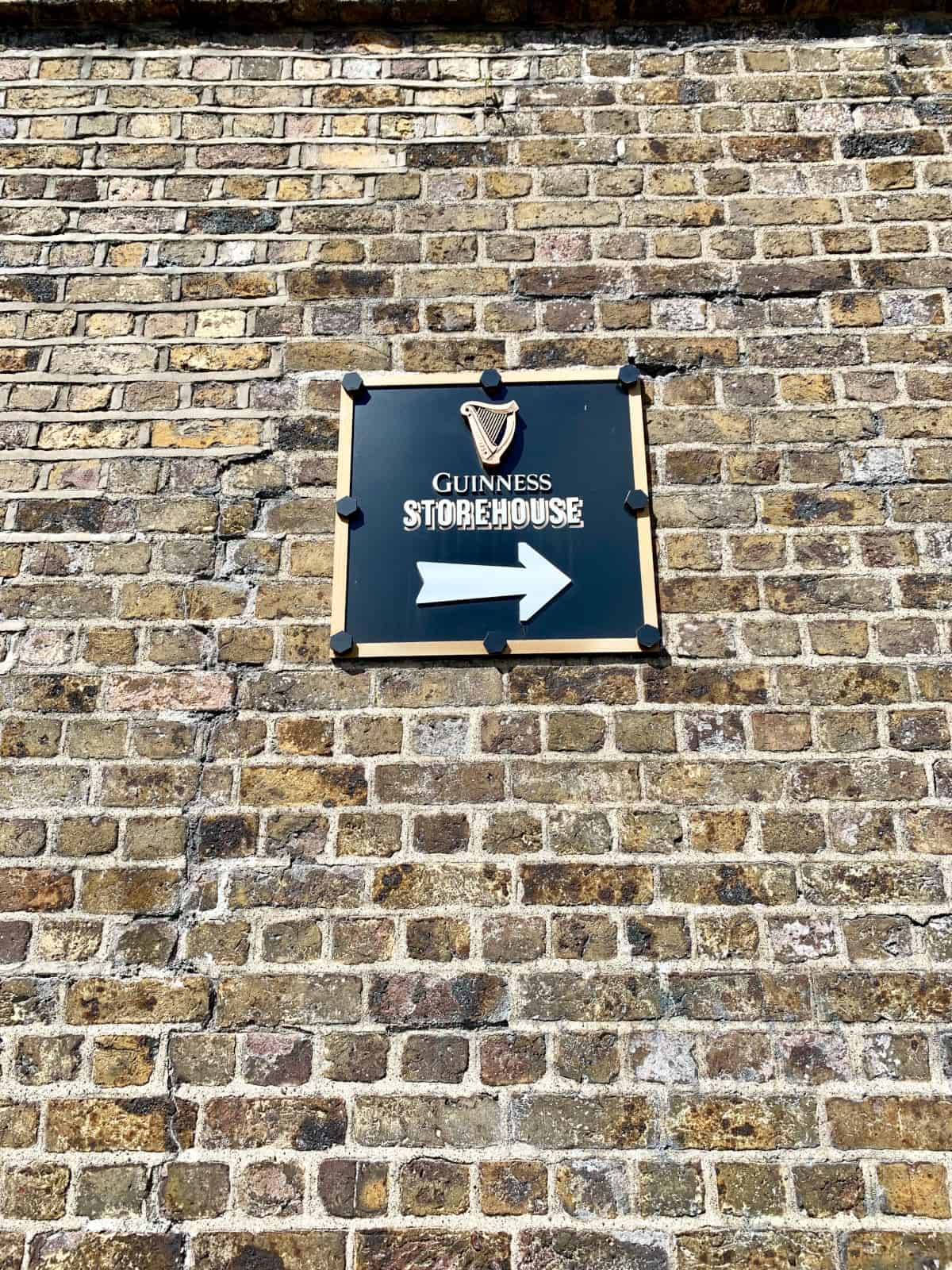 I had booked online earlier in the day for a 3pm tour, and declined all the extras.  So once I arrived, I lined up for my tour time and then they let my group in.

Their tours are self-guided, so you can go at your own pace.  Some people go super slowly with an audioguide, but I sped through the actual tour.  This was for a couple reasons…time, for one, and also because you get to a point where you can only learn about the distilling/brewing process so many times (and it’s part of my day job). 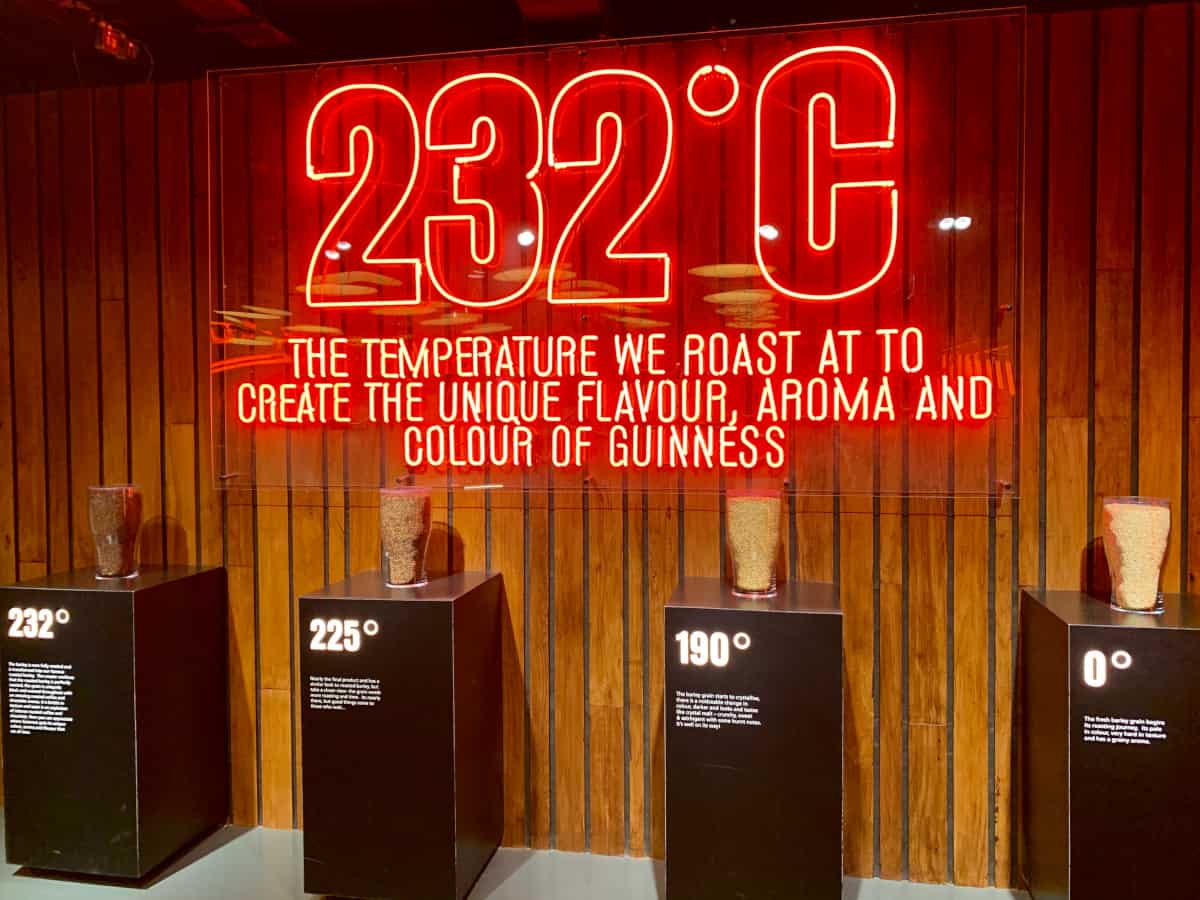 The first parts of the tour walk you through various parts of the brewing and fermentation process, using different types of visuals and interactive designs. 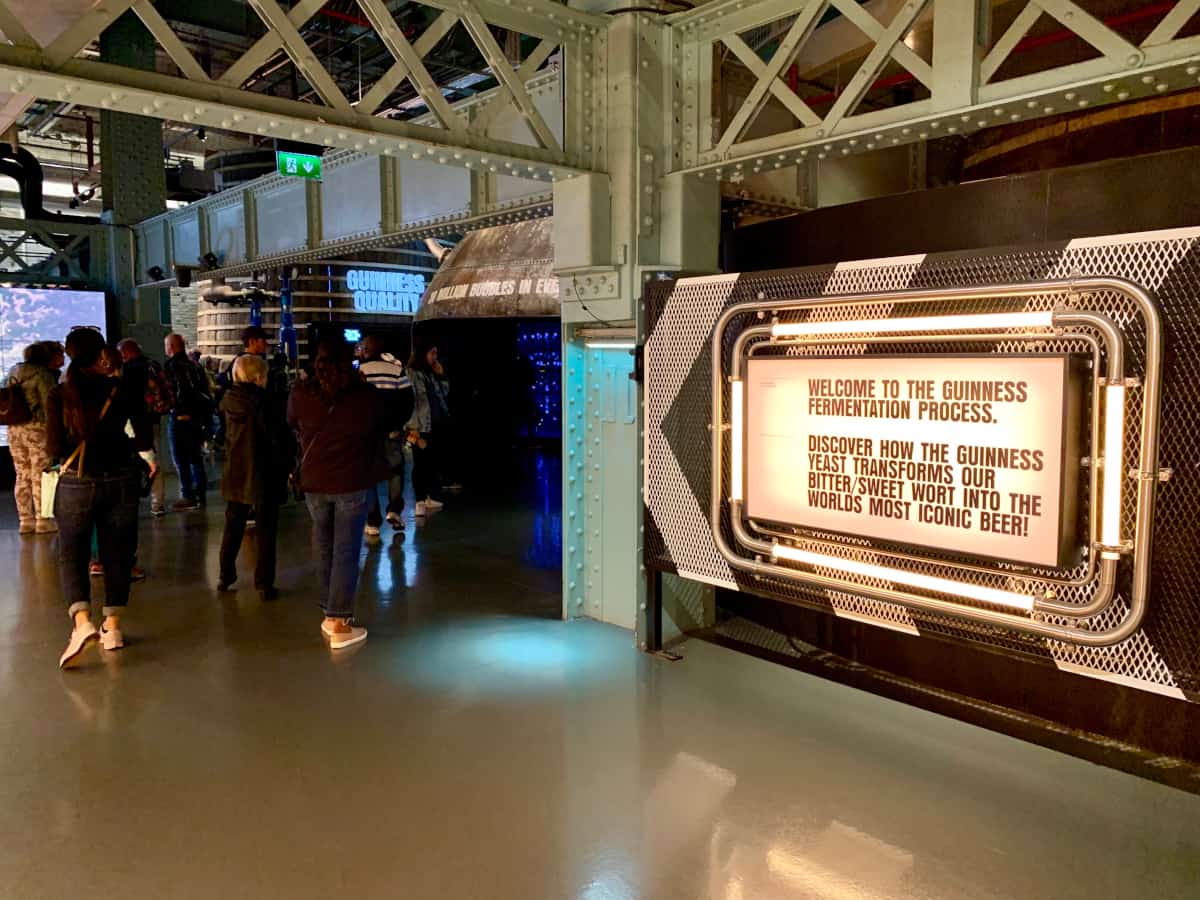 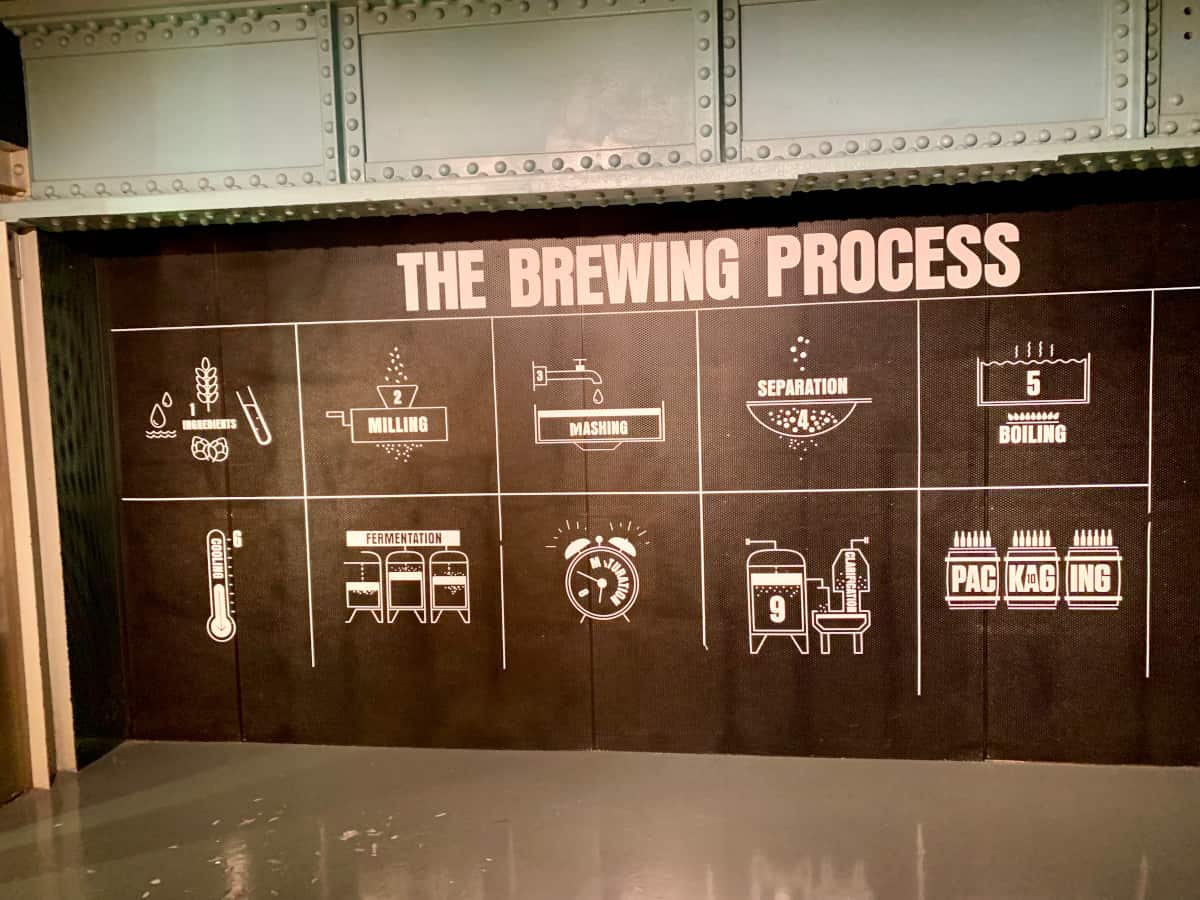 The area is very large and open, so you don’t feel super crowded.  This helps, because you can wander around from display to display and not have to push and shove to see things.

I have mixed feelings about the idea of self-guided tours, to be honest.  I tend to just cruise through quickly, my little efficiency-loving heart speeding me on toward whatever’s next.  But that obviously means I miss a lot, but also that I fit more into my overall itinerary and get to go at my own pace.  So some positives and some negatives?

I think for the Guinness tour it is a good thing, because there are so many different things to see and do—one tour could never go through all the different areas without taking half the day.  So instead each person gets to kind of self-curate their own experience. 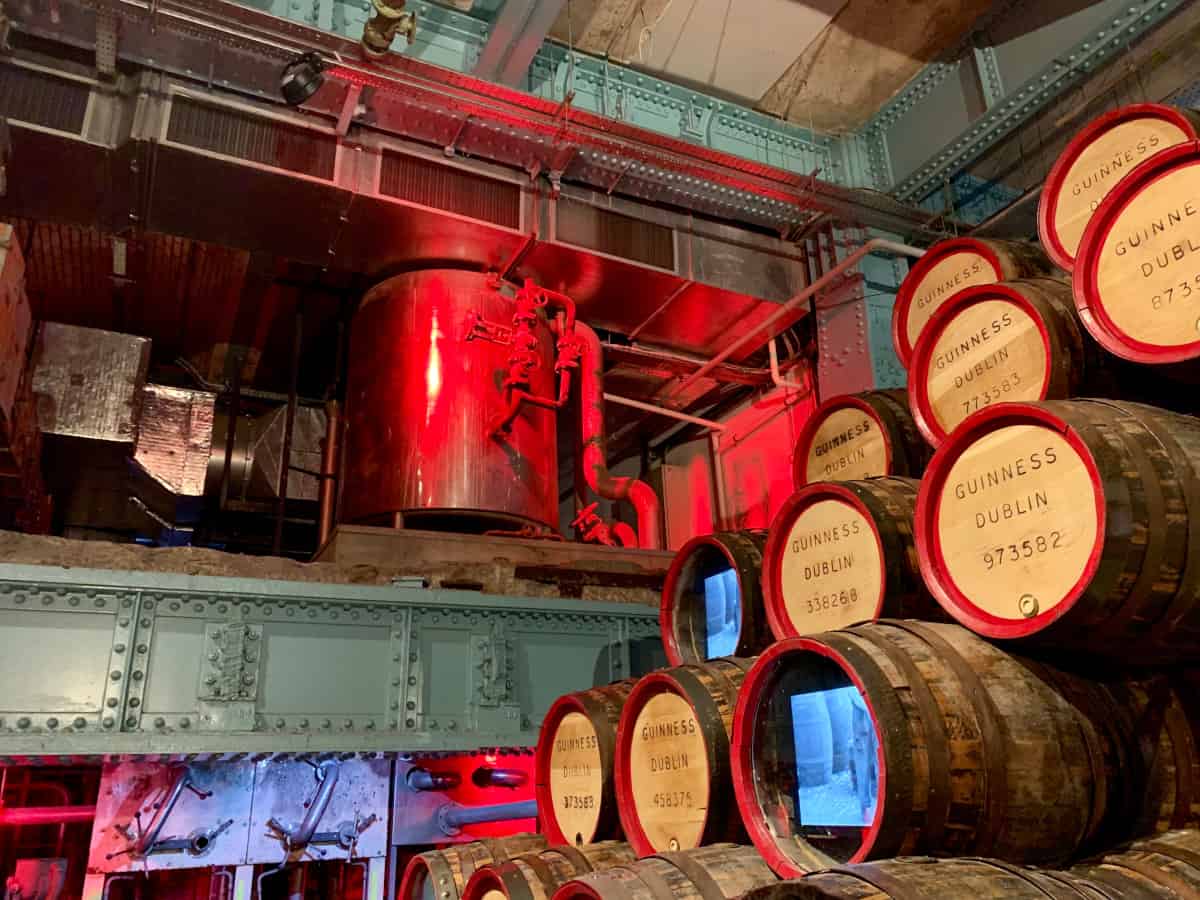 One thing I somehow missed is the main tasting experience, which is (apparently) on the second floor.  No idea how I managed to bypass that entirely, so unfortunately I can’t speak to what it’s like.

I have mixed feelings on the exhibit that showcases the history of Guinness’s advertising.  To me I hadn’t really seen tons of it before, though I’m curious if it’s something international tourists know and care about as much?  Either way it’s probably a bit of fun. 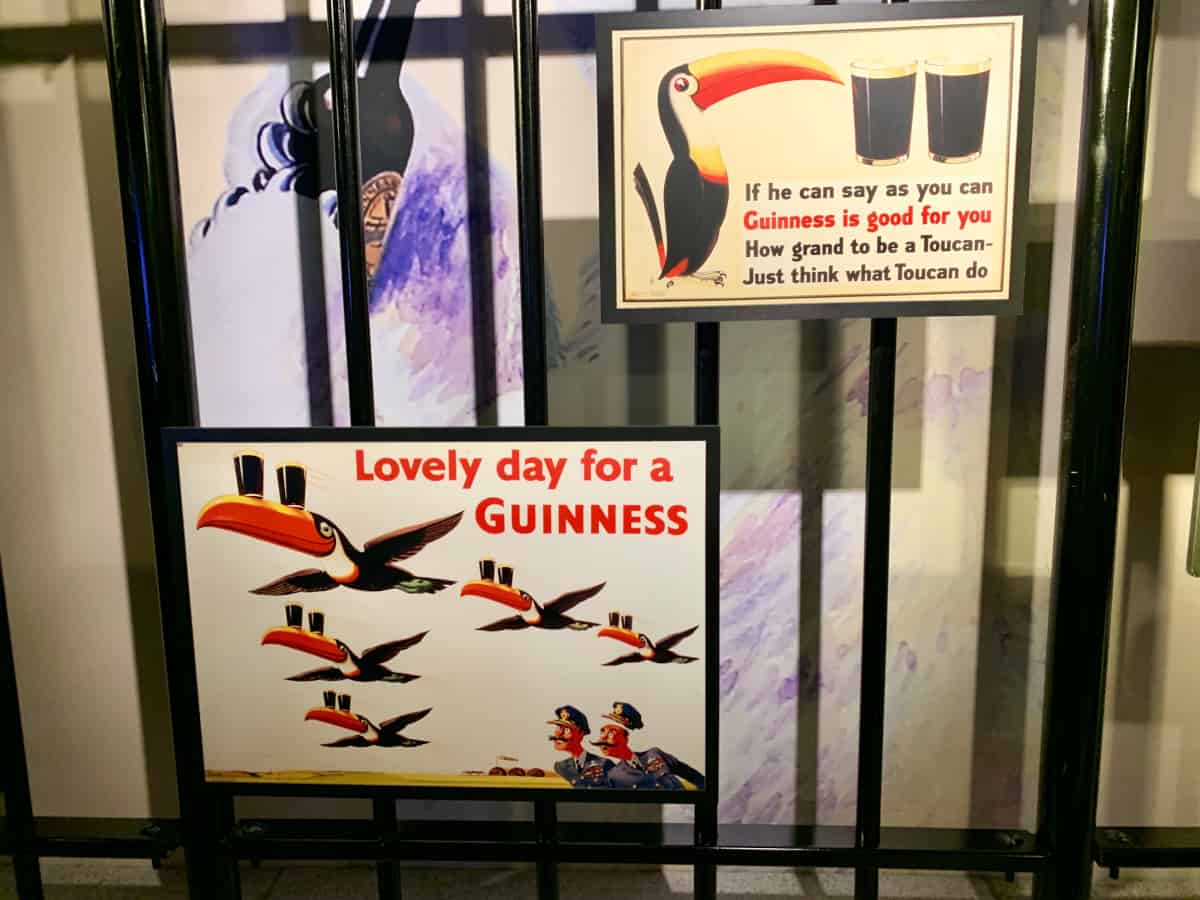 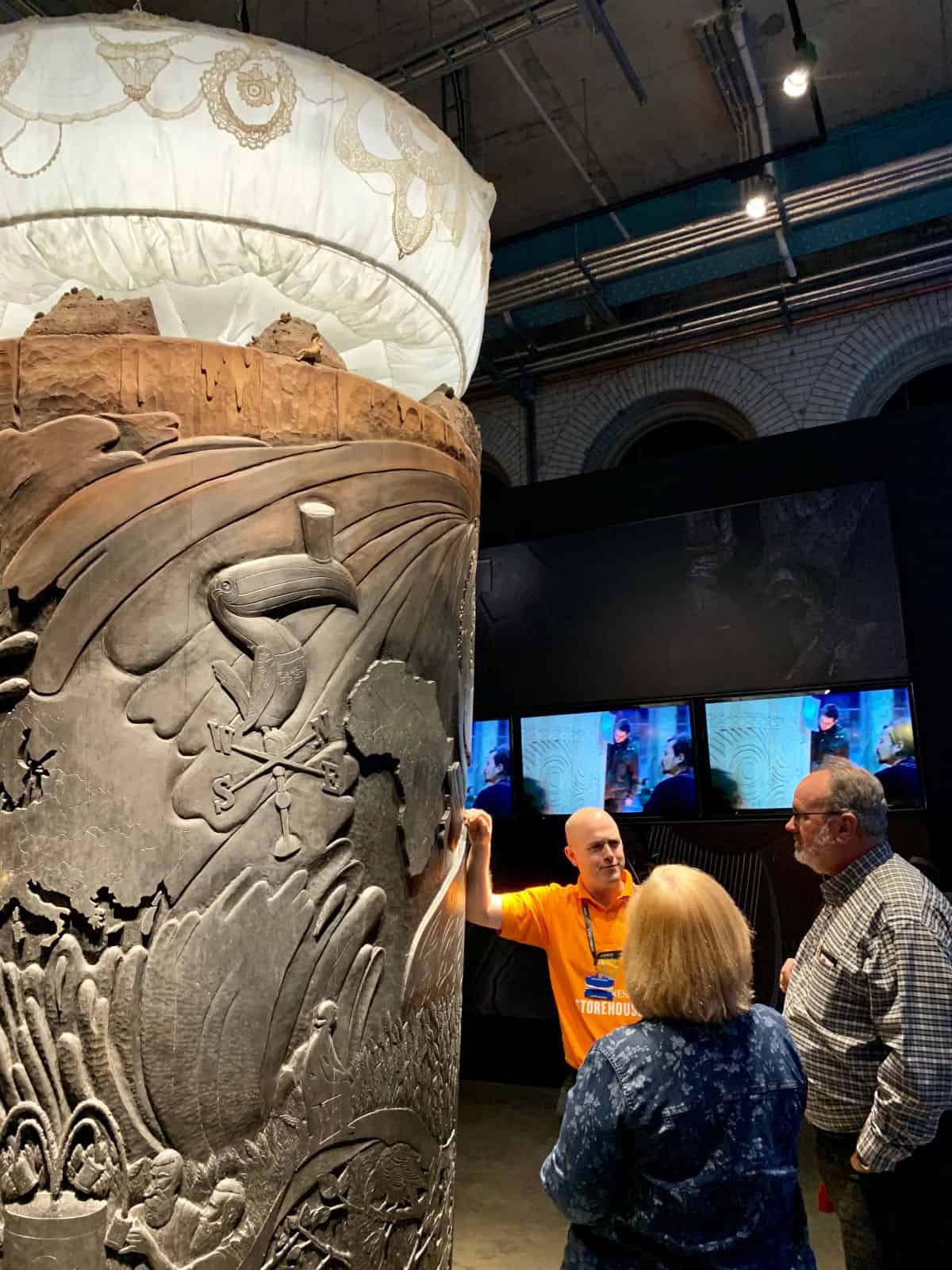 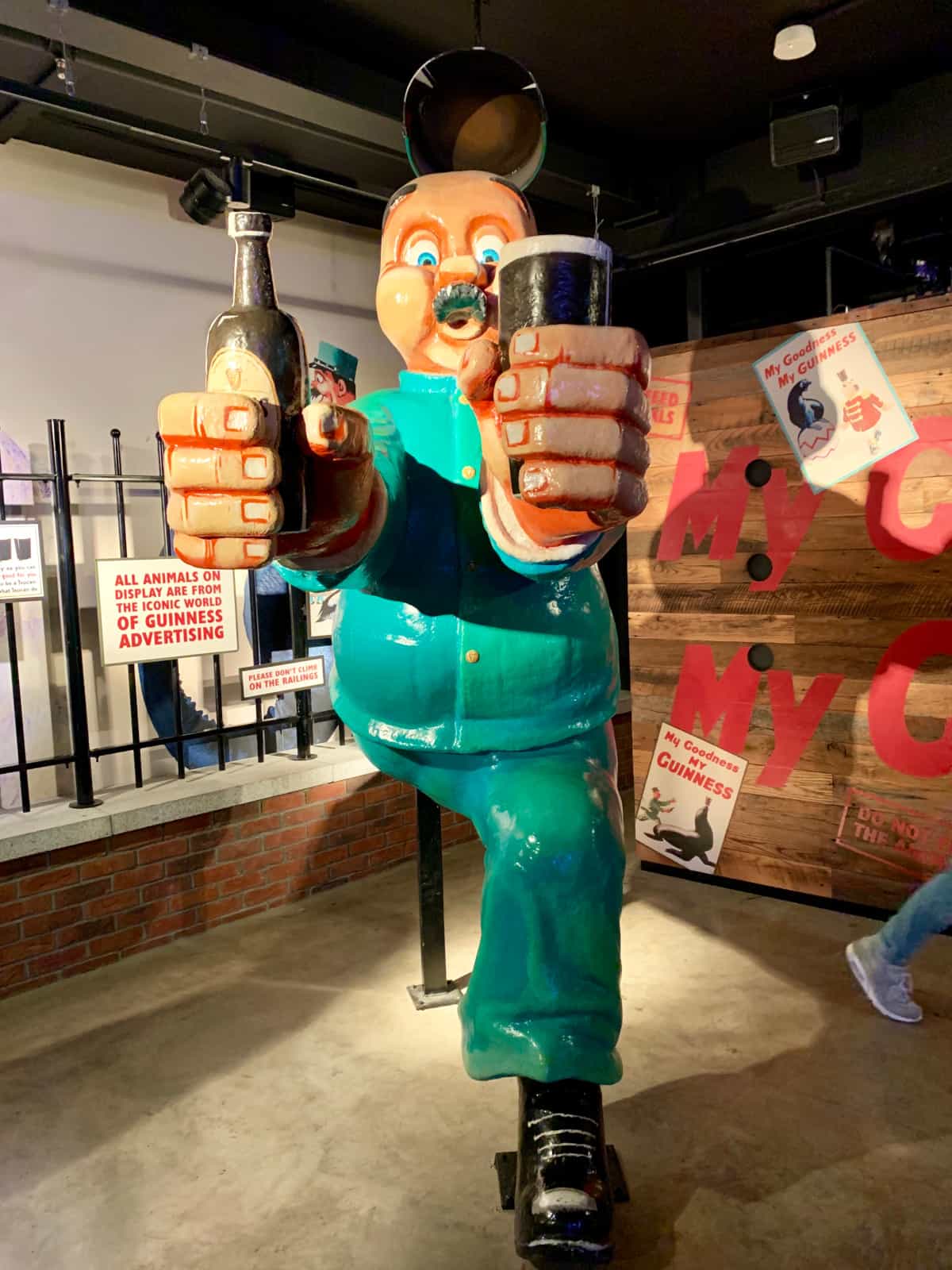 From here you have a couple options.  If you purchased your tickets from the Guinness Storehouse website, it would have given you the chance to do a few different “up-sell” experiences.

One of those—and I’m still BUMMED I didn’t do it—was the “Stoutie”.  A.k.a. stout selfie!  You can see more about it here since I don’t have a pic, but looks super fun (and only like €6?).

Instead I went with what was included with my tour ticket.  You actually have a choice here…*either* pouring your own pint, or having a drink up in the Gravity Bar.  More on that later, as that’s the choice I made.  If you choose to do the “pull your own pint”, you’ll go to the Guinness Academy on the fourth floor. 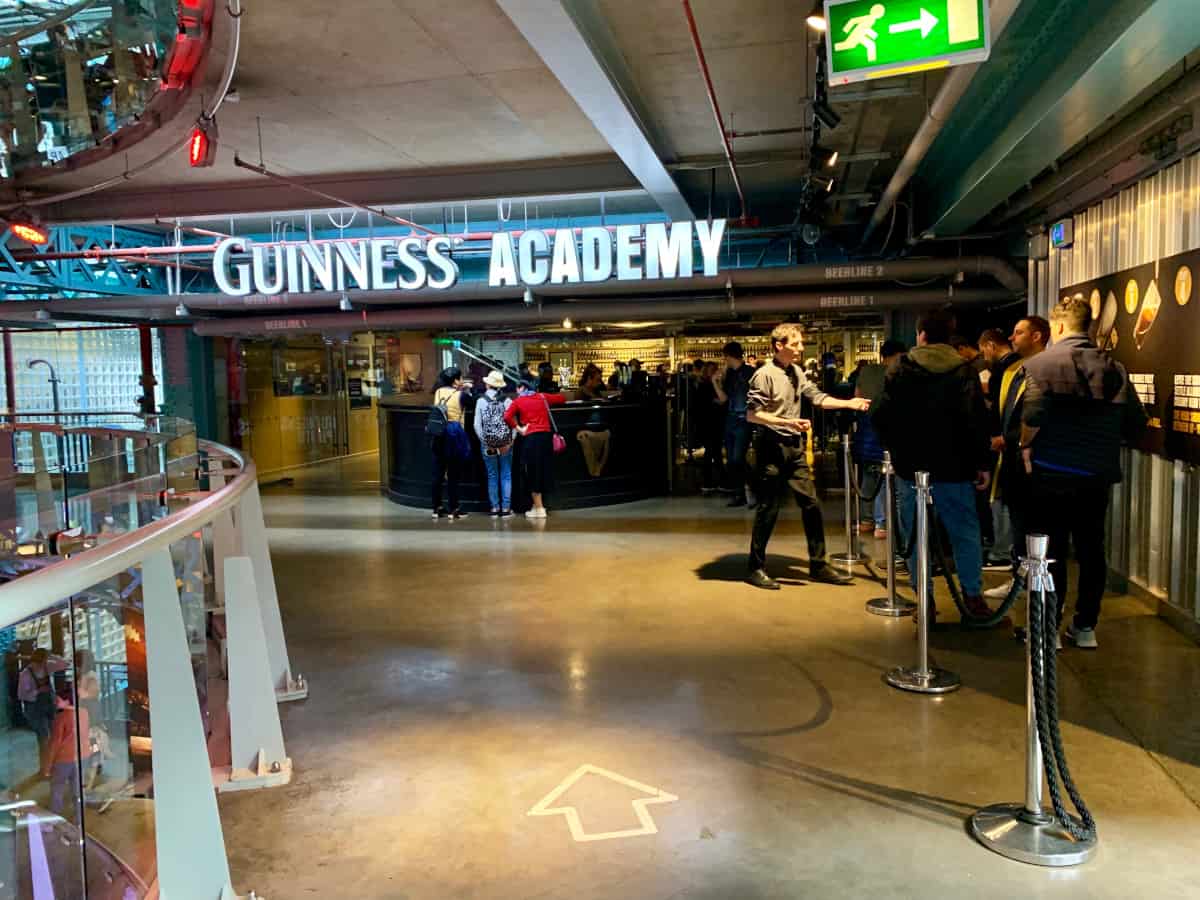 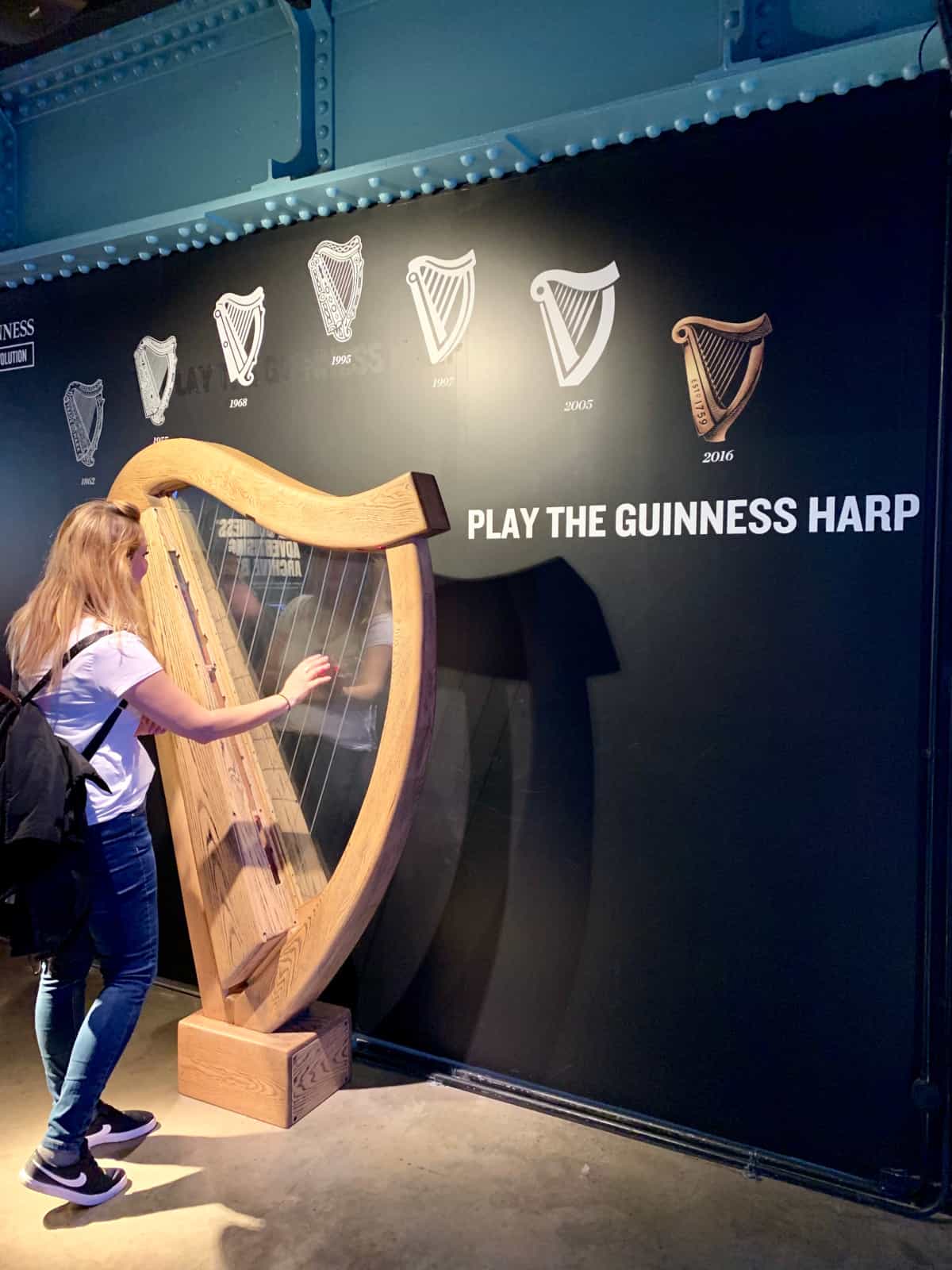 Instead, once I’d looked my fill of the other floors, I headed up to the 7th floor to experience the famous Gravity Bar and drink my free pint. 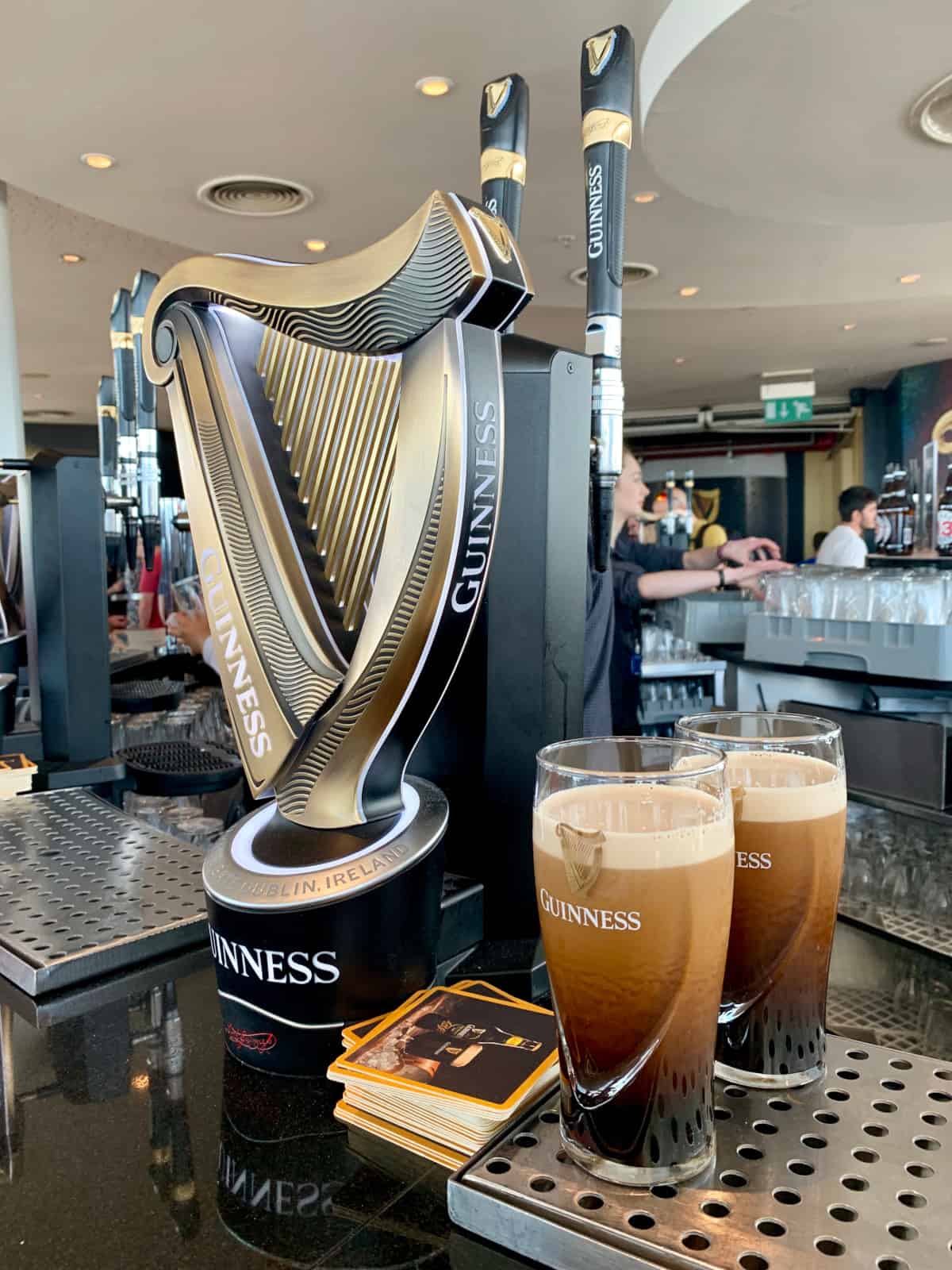 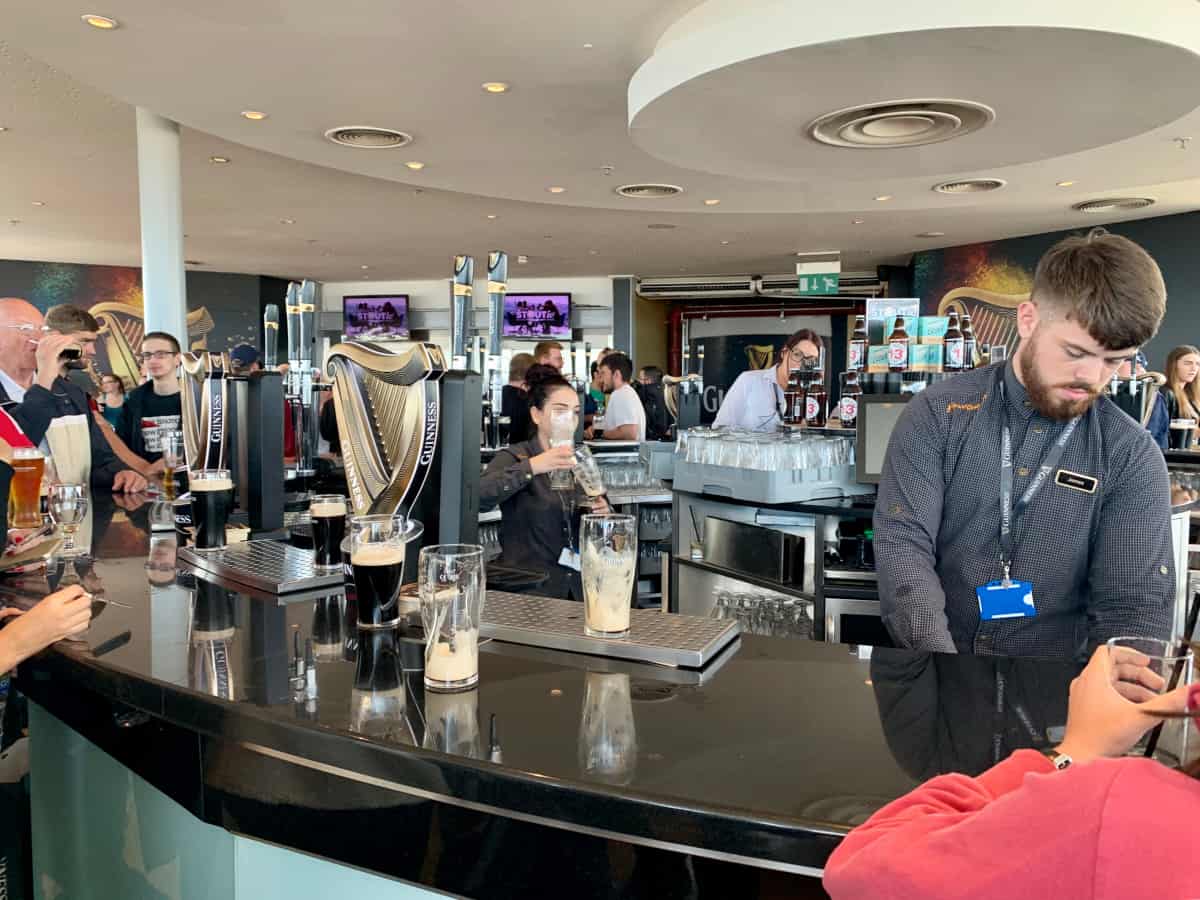 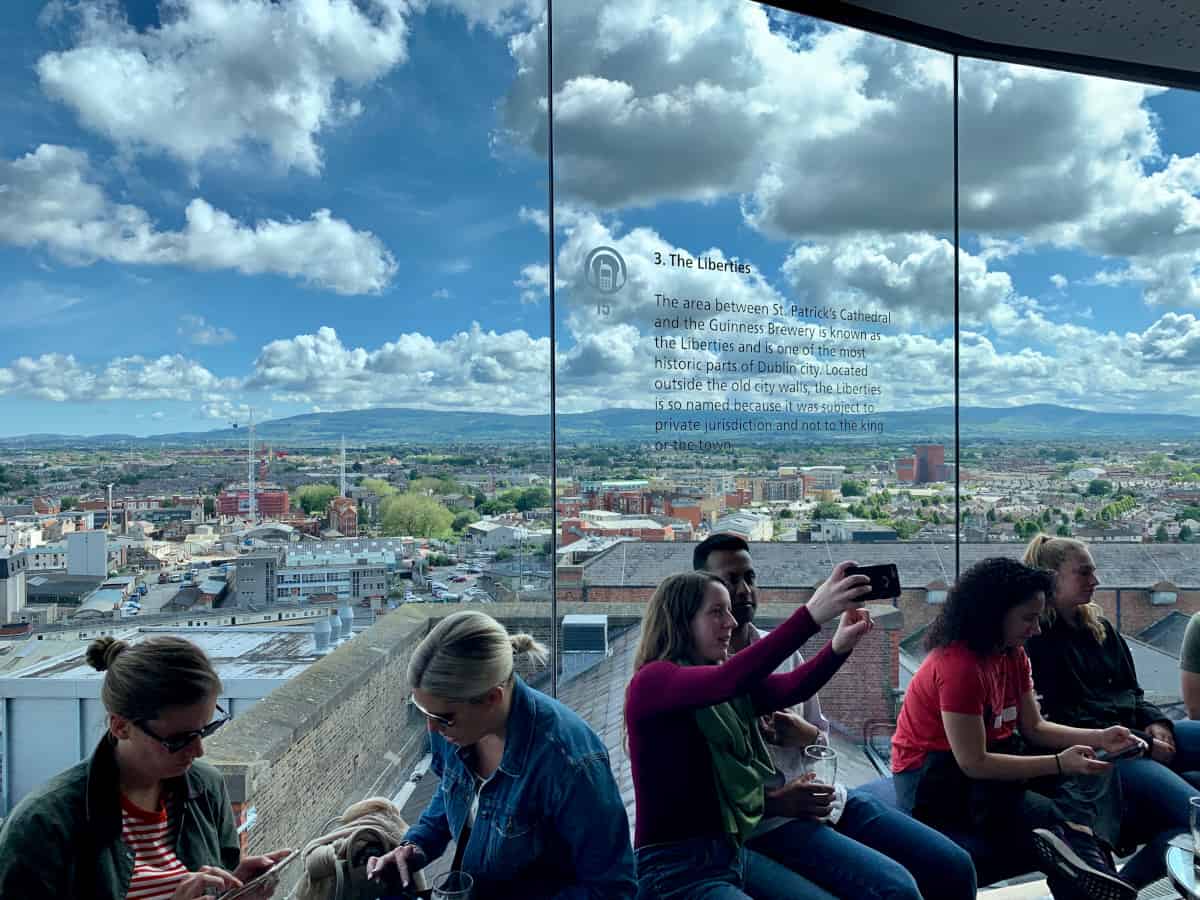 Yes, the drink is nice, but the 360-degree views are really the draw here.  Gravity Bar was crowded so I didn’t stay too long, but on a gorgeous day the views are great. 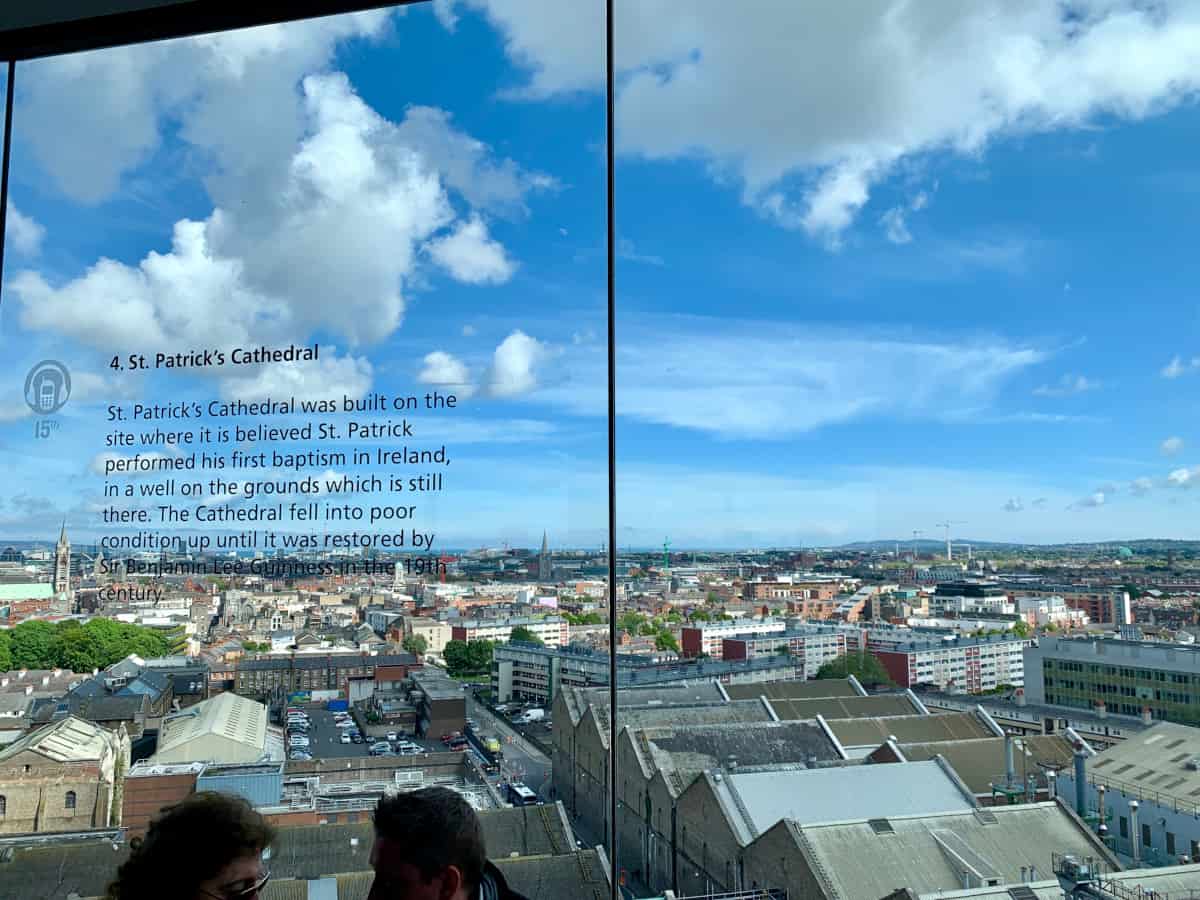 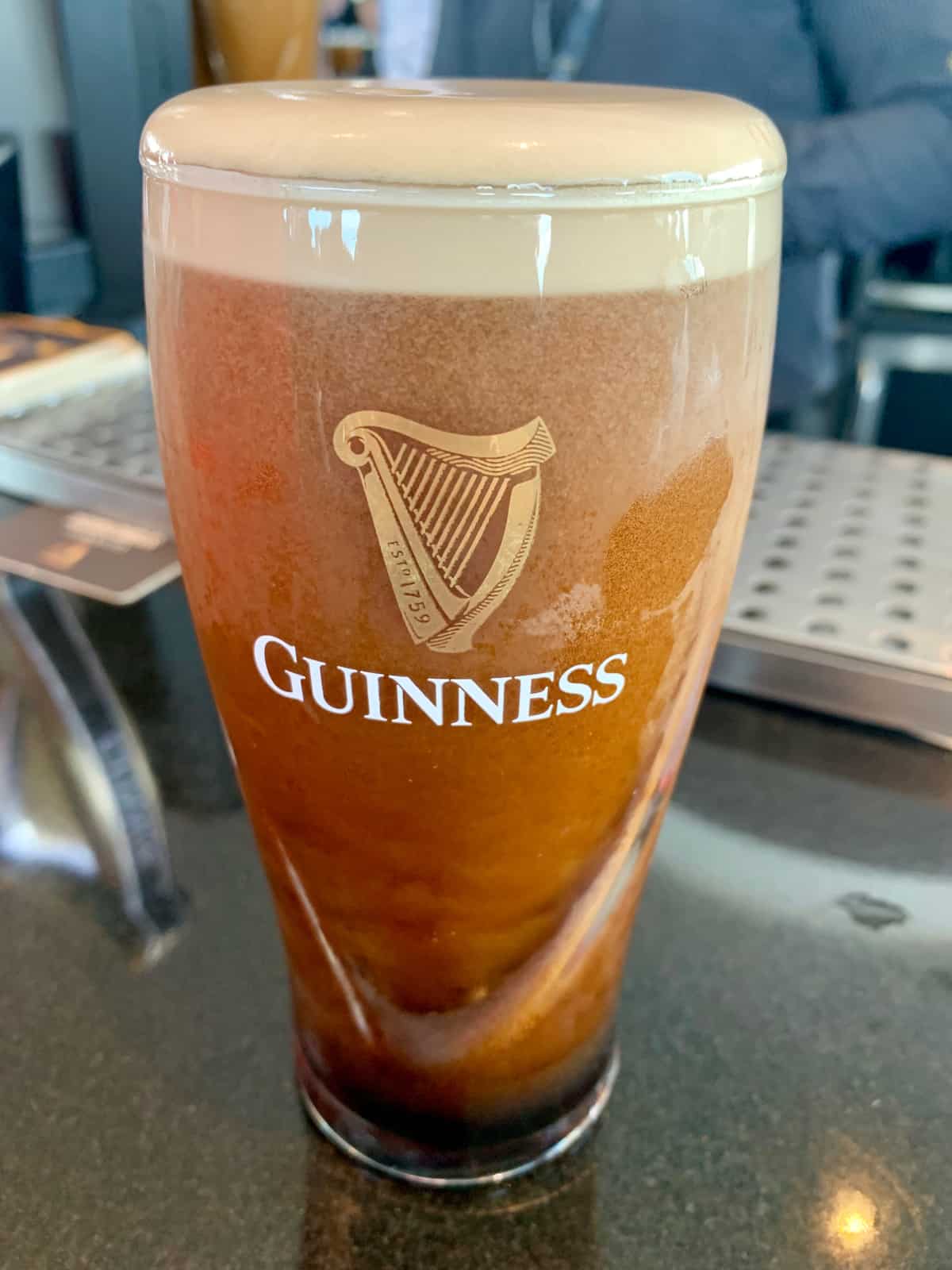 Another Dublin idea:  What It’s Like Touring Dublin’s Jameson Distillery

Guinness Storehouse also houses four cafes and restaurants if you fancy a bite (though I recommend heading to The Boxty House near Temple Bar instead if you’ve got time).

Before you leave, don’t miss snagging a selfie at this sign just outside the building! 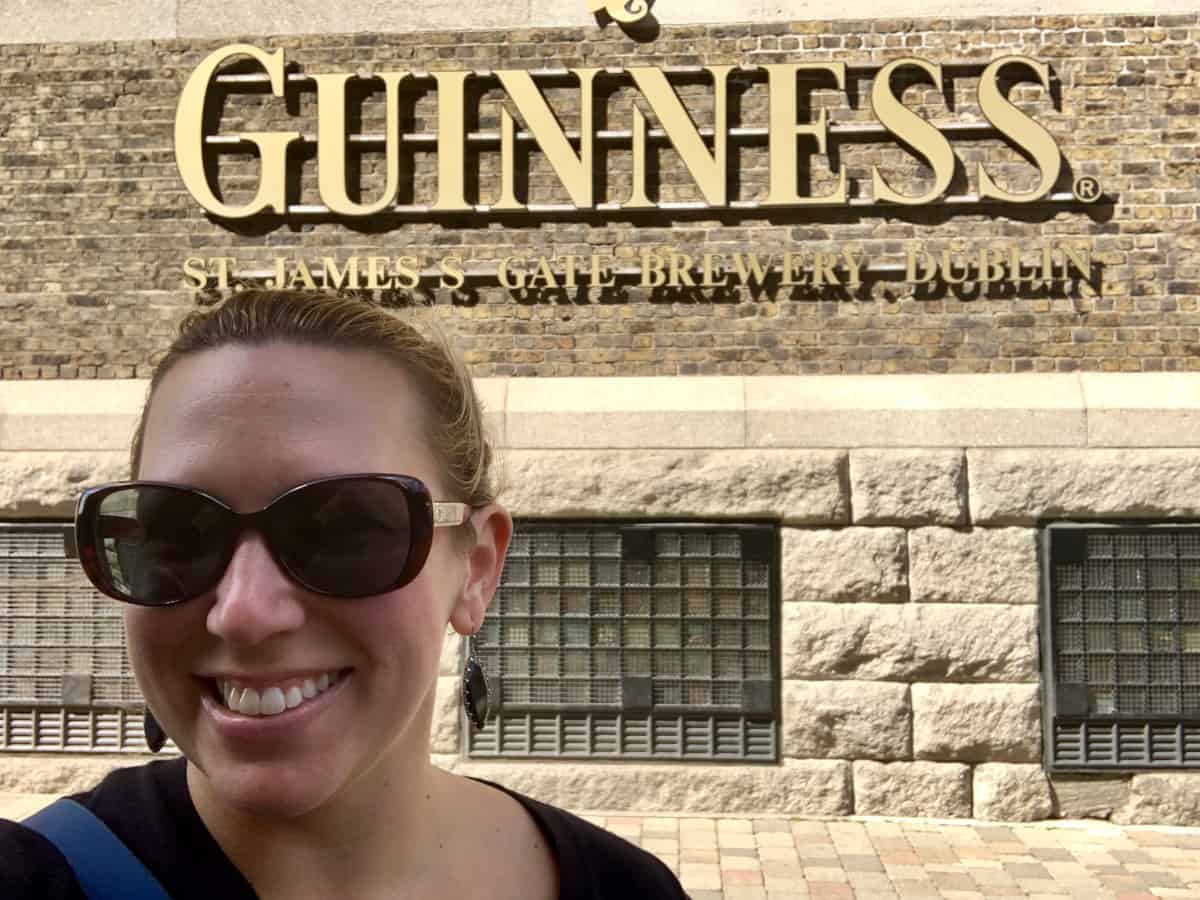 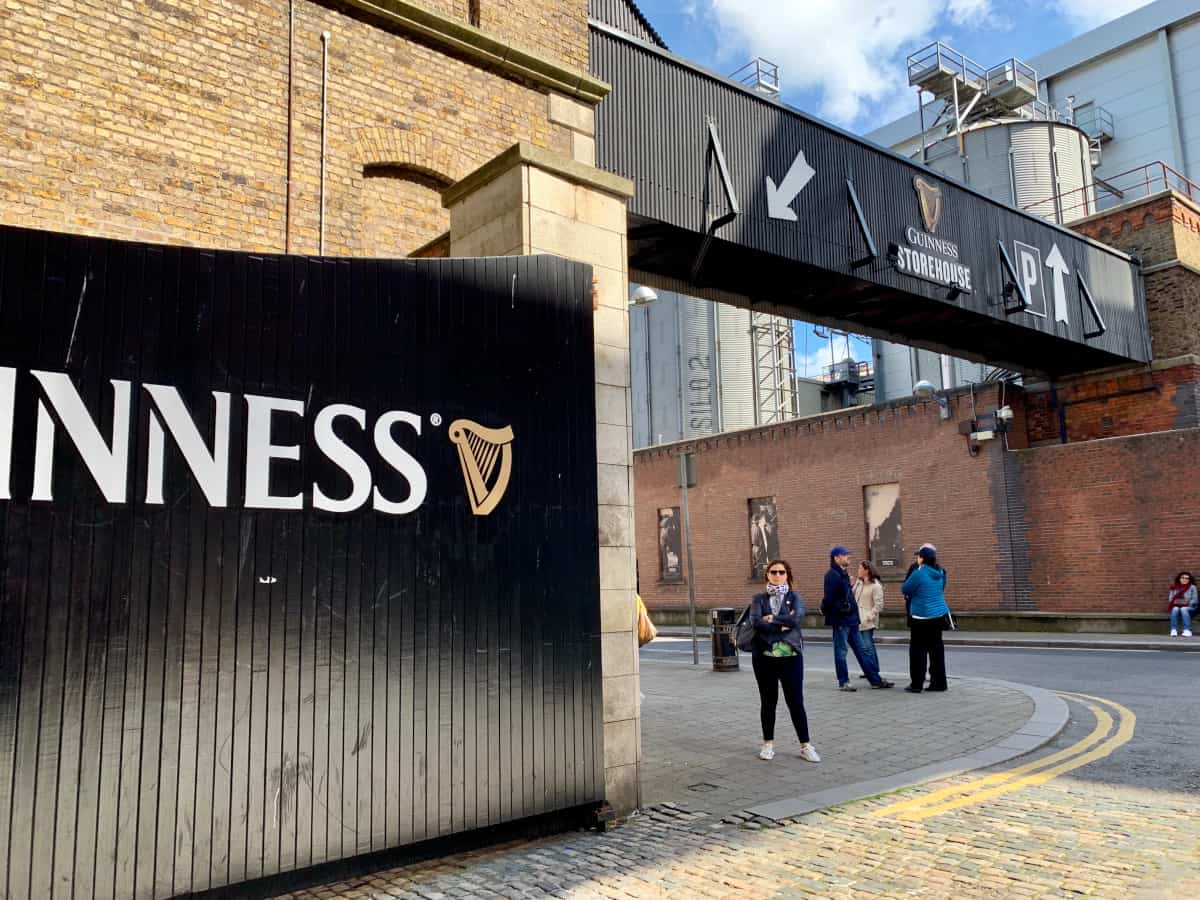 One thing I was bummed about was missing the chance to visit Open Gate Brewery, which is Guinness’s experimental brewery.  It was closed the day I visited (check opening times here), but when it’s open you can go and try multiple interesting brews on tap.  This is totally separate from Guinness Storehouse, but it’s literally like 5 minutes’ walk away, around the corner. 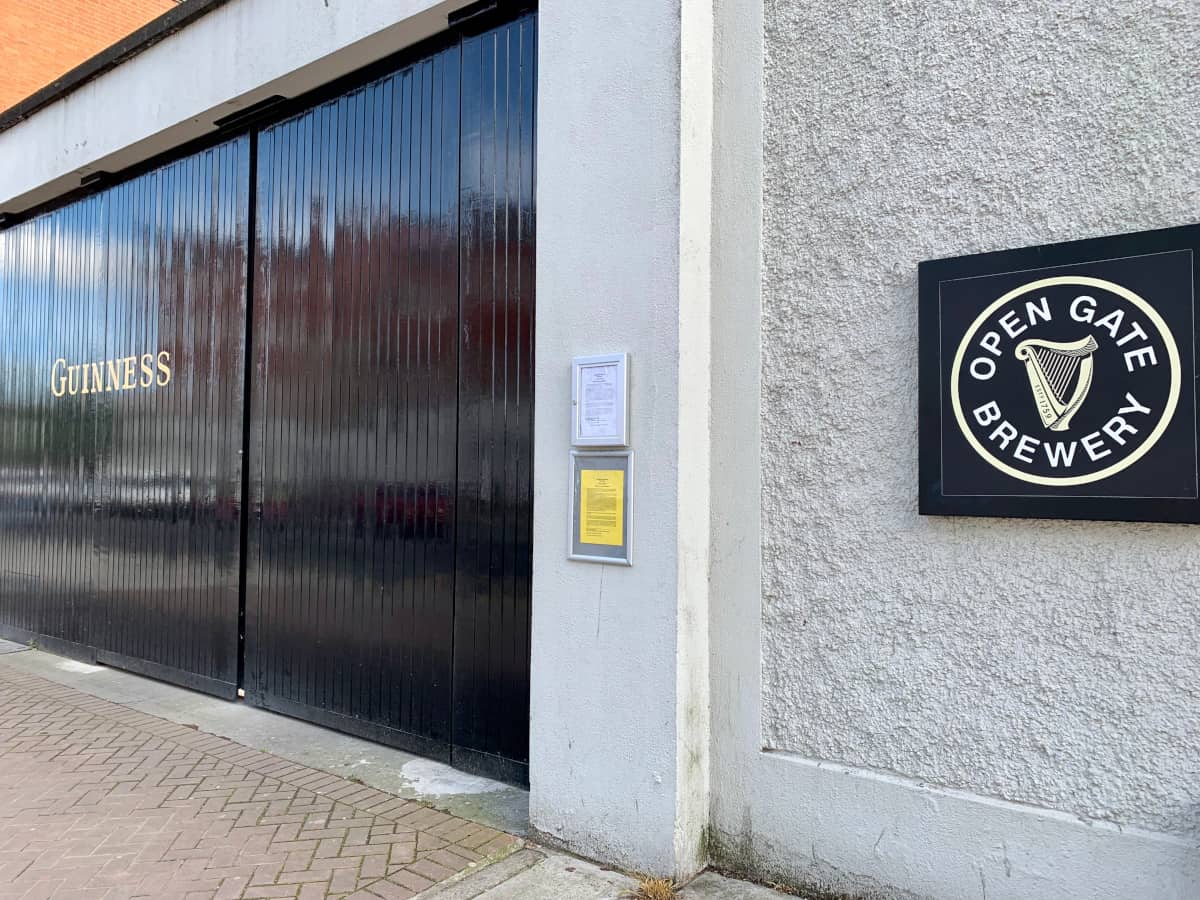 So is touring the Guinness Storehouse worth it??  Generally I’d say yes.  It’s such an over-the-top experience and has diverse elements for different types of people—even if you’re not a big beer drinker.  And get the Stout-ie! 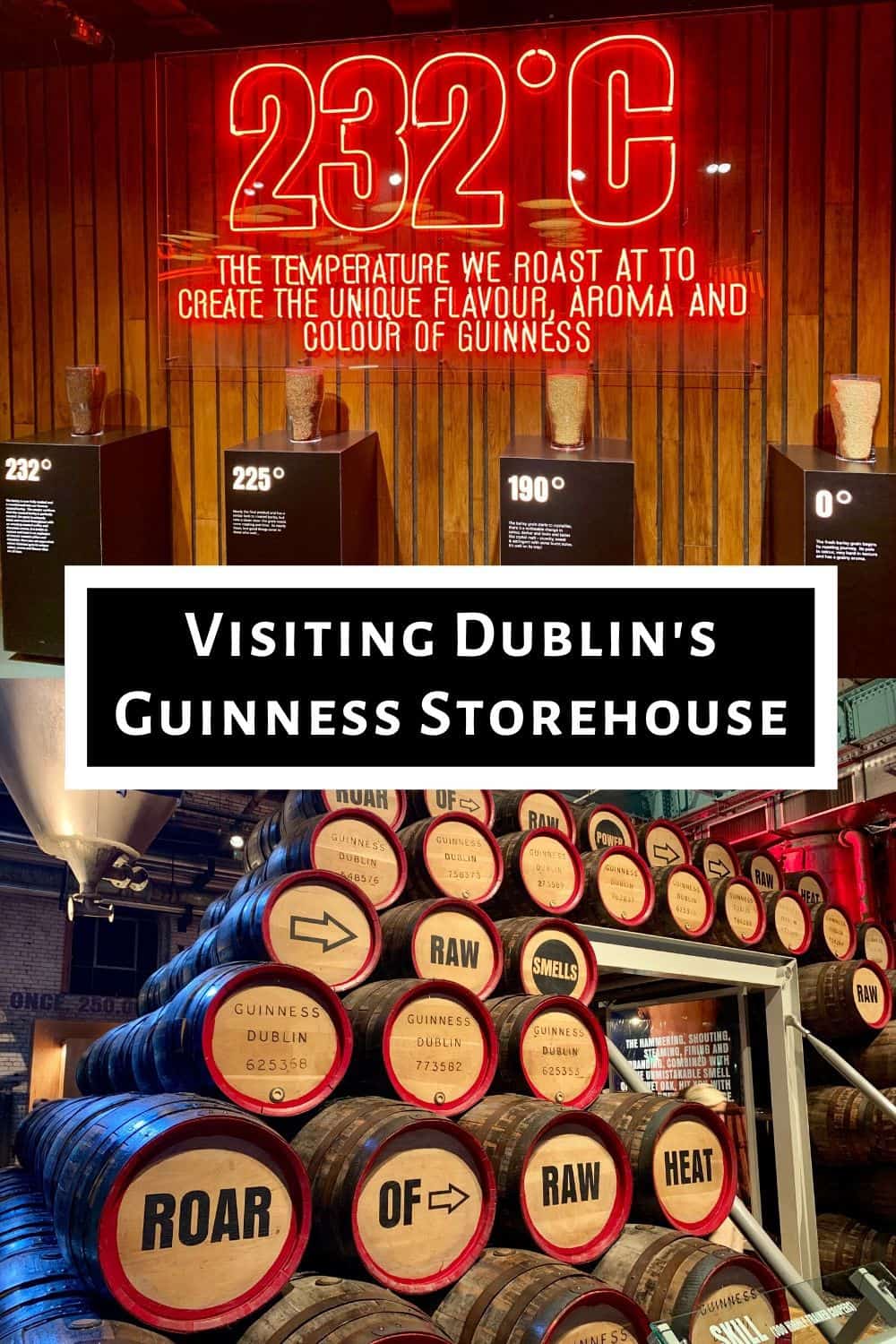 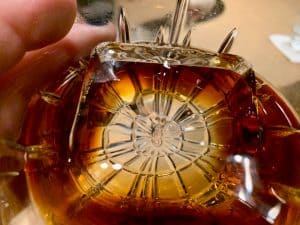 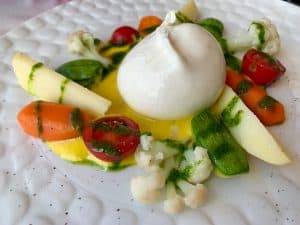 Where To Eat & Drink In Cortona, Italy