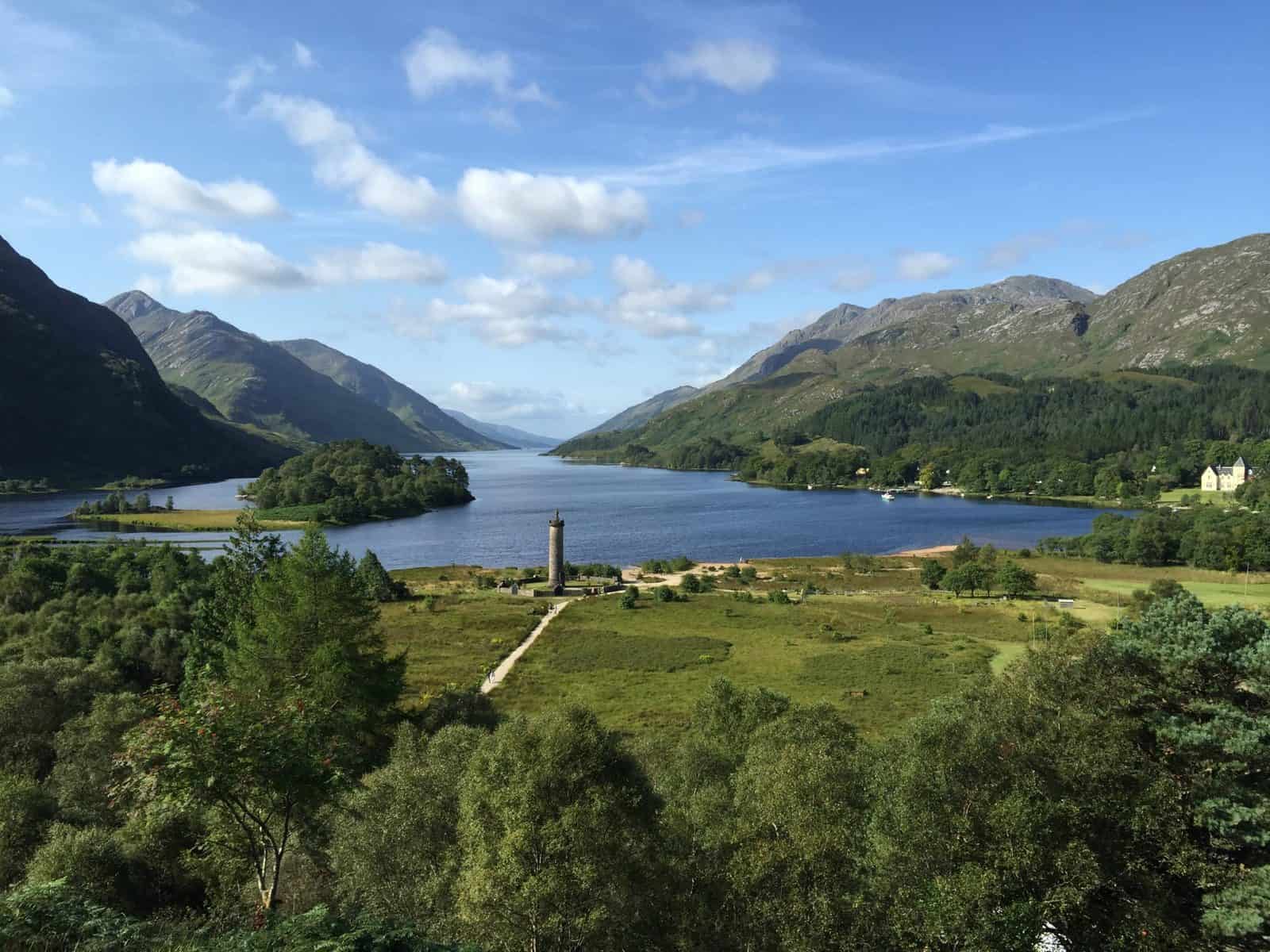 While I’ve got beautiful scenery for you here, this one’s also for the Harry Potter nerds out there…because today we’re visiting a site that has two iconic Harry Potter movie views for the price of one!

We’d been over on the Isle of Skye the day before, taking a gorgeous, moody boat trip to Loch Coruisk and then a lovely evening in Isleornay.  We took an early ferry over from Armadale (on Skye) to Mallaig on the mainland to start the day. 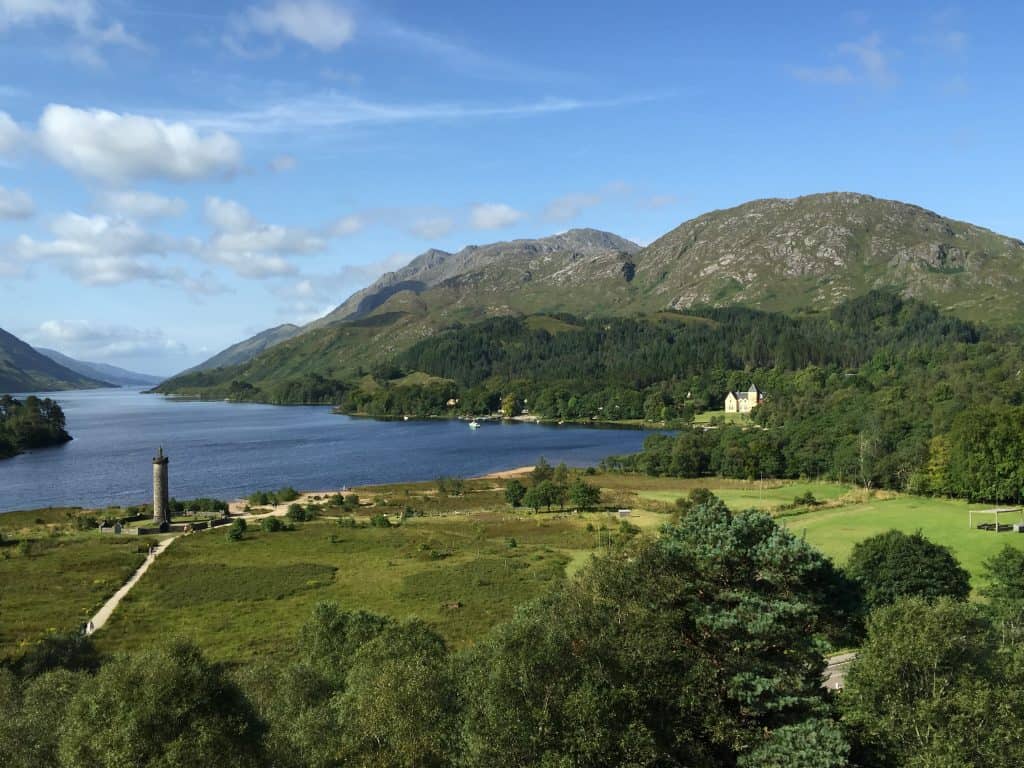 This day was largely repositioning—a travel day to get us from Skye over to Iona—but it still was a beautiful drive and the Harry Potter nerd in me was totally stoked.

We didn’t get to spend much time in Glen Coe (which was a bummer), but we did get to see the huge Glenfinnan Viaduct and Jacobite Train. 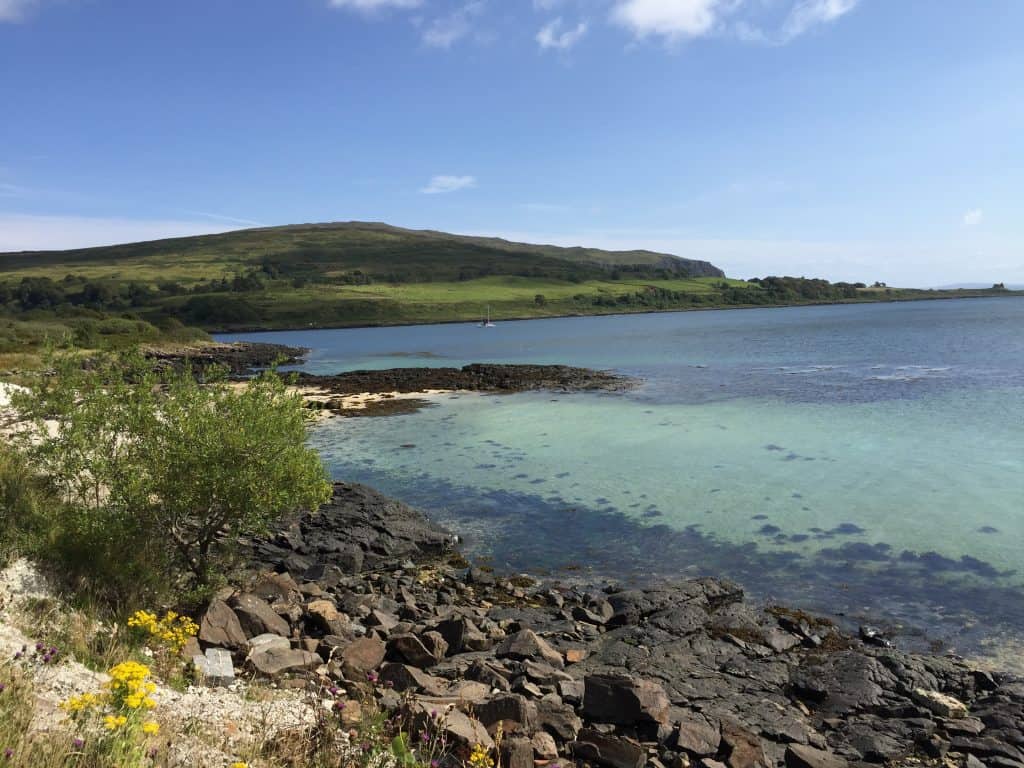 A Day on Scotland’s Mystical Isle of Harris & Lewis

How to Spend 2 Stunning Days on the Isle of Skye

Views for Days:  Hiking the Quiraing on the Isle of Skye

A Day on the Magical Island of Staffa

A First-Timer’s Guide to 24 Hours in Edinburgh

I honestly don’t even know where this beautiful little beach is, but we happened upon it along the drive and couldn’t resist stopping for some photos.  It’s crazy how many of the beaches in Scotland look like they could be on a Caribbean island… 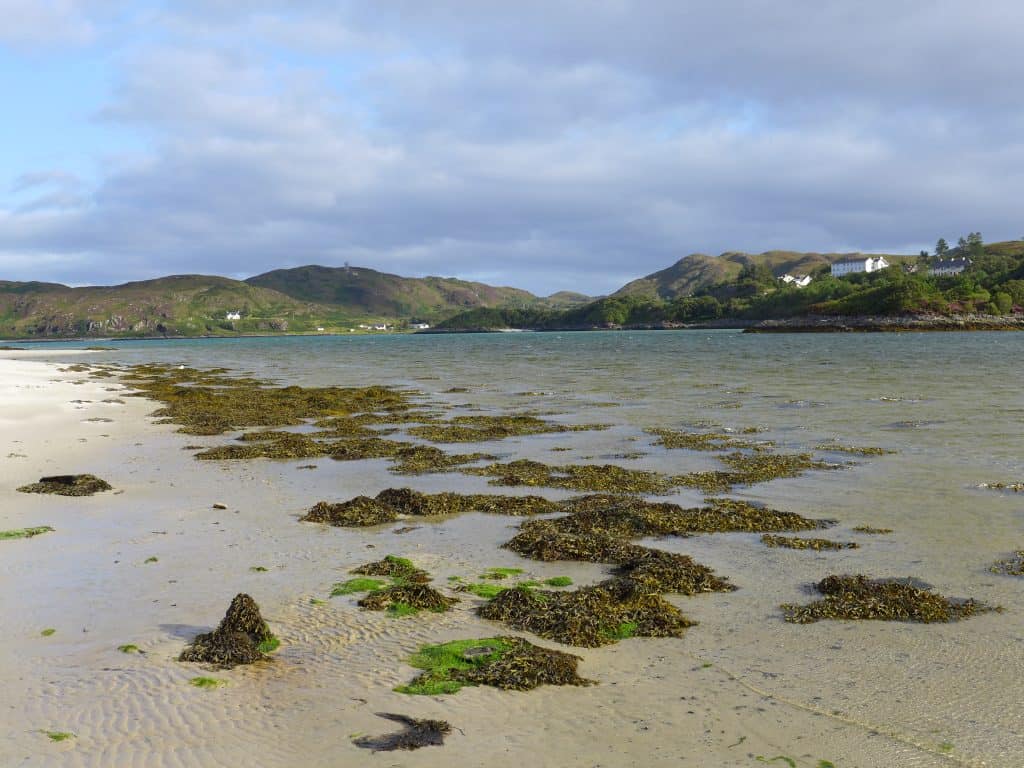 We arrived at Glenfinnan and got situated, walking up to the viewing point for the famous Jacobite Train (more on that in a minute).  But as you’re waiting, turn around…know what that is??  That’s right, one of the iconic views from Hogwarts.

Well, technically you’re looking at Loch Shiel, a piece of Glen Coe that was also used in filming some of the Harry Potter movies.  But in my mind, it’s where Hogwarts is located.

It’s one of the two lochs used for filming the movies over the course of the series.  This Buzzfeed article has more info on where it was used as well as several other HP locations in the UK.  For instance, it was the lake in this scene with Buckbeak. 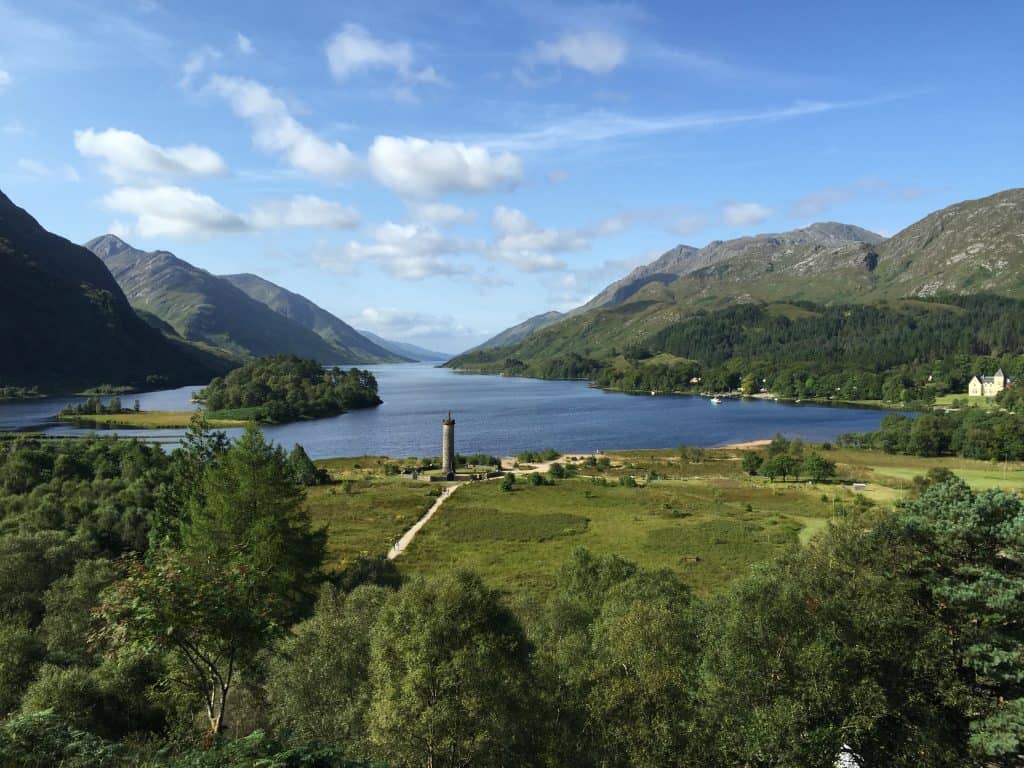 Okay, now you can turn back around and behold the famous Glenfinnan Viaduct.  While it looks like something out of ancient Rome, the viaduct and train line only date back to the late 1800s.

But it’s most famous (at least as far as I know) because it was used as the Hogwarts Express in the Harry Potter movies.  As a major Potter-phile, I had to try and fit it into our itinerary…it wasn’t really much out of the way, and was a quick stop! 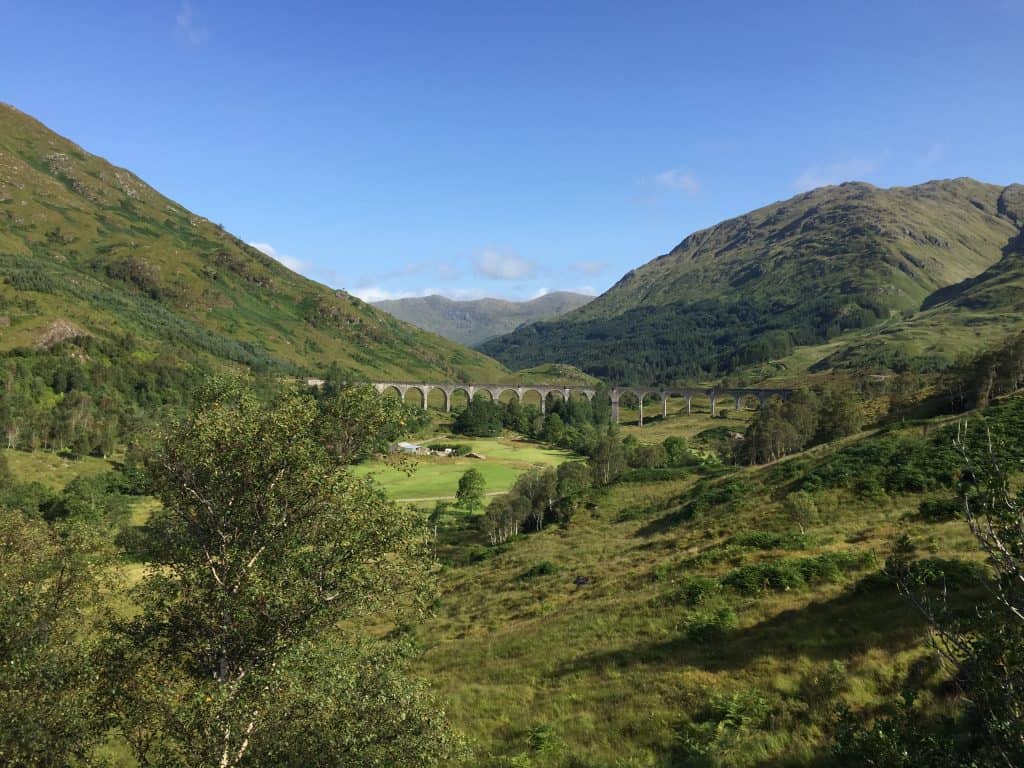 Harry Potter fan? How to have an amazing visit at the Wizarding World in Orlando!

The Jacobite Train is a stream engine and bright red train that takes tourists on a scenic ride through parts of Scotland.  The key for seeing the steam engine and red train chugging its way over the viaduct is TIMING.  I’ve provided specific tips for that at the end of the post.

We staked out a spot from afar and snapped a few pics while we were waiting.  Then the train came into view and started across the track!  We loved the white cloud belching, chug-a-chug-a journey over the Glenfinnan Viaduct. 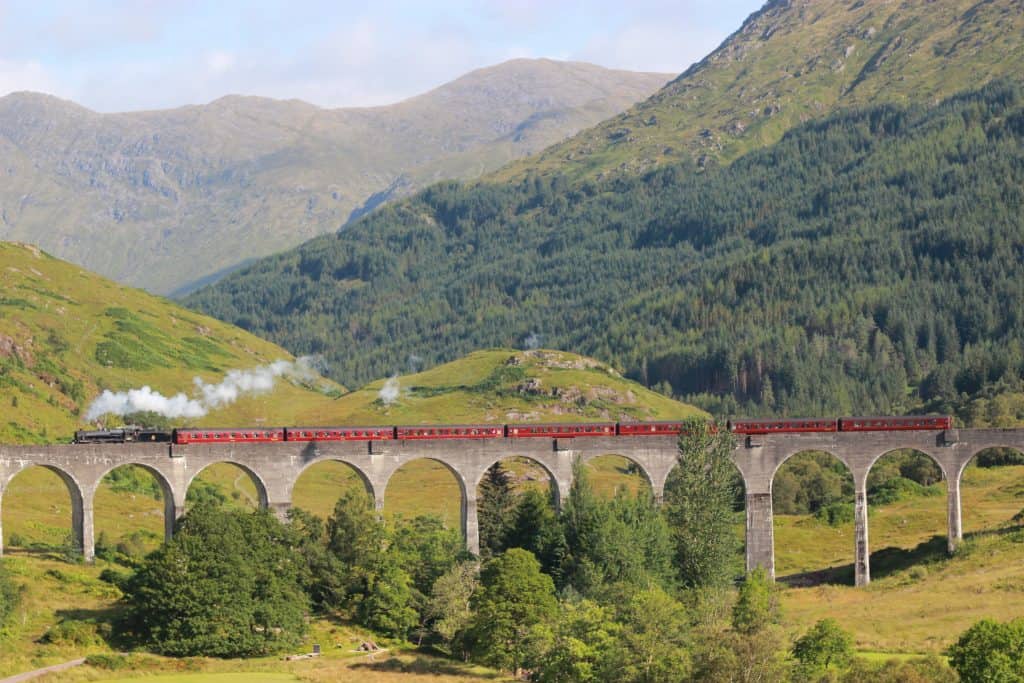 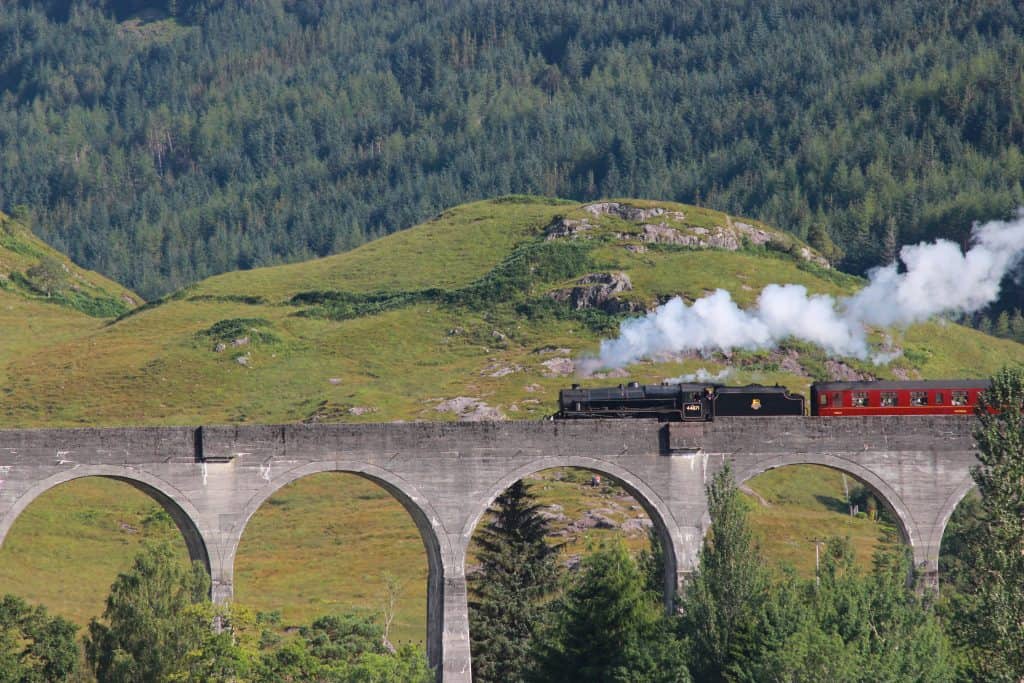 I wish we’d had time to go up close to the viaduct, but were running behind.  This blog post talks about where to go and what to do if you’re looking for a different vantage point. 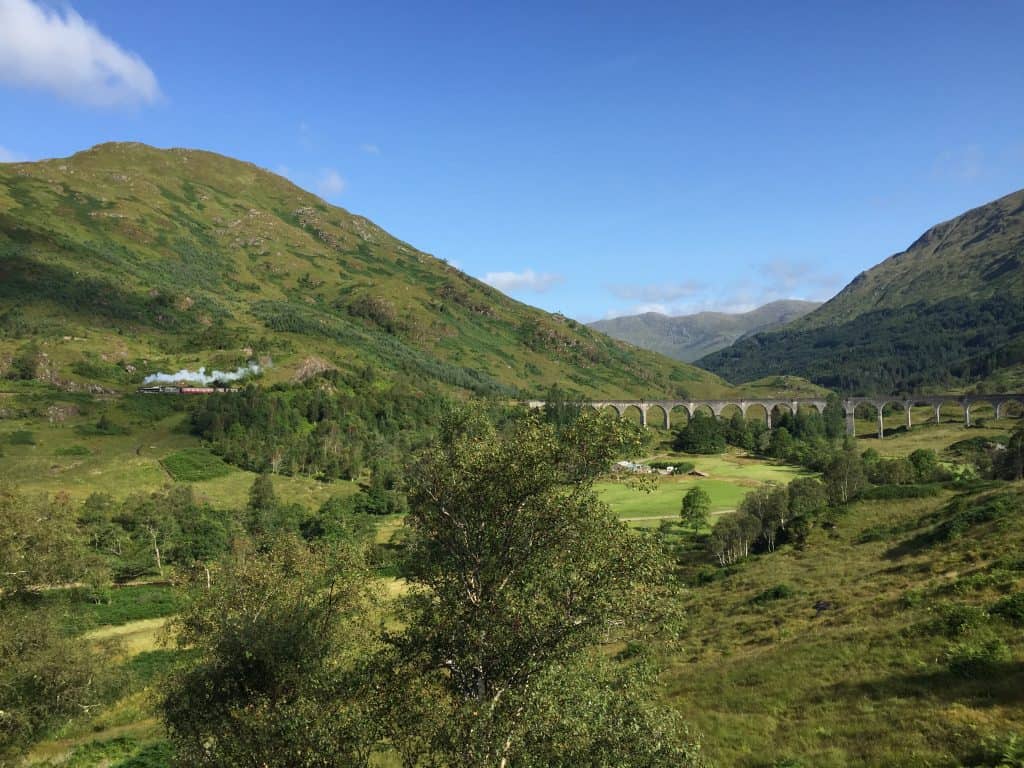 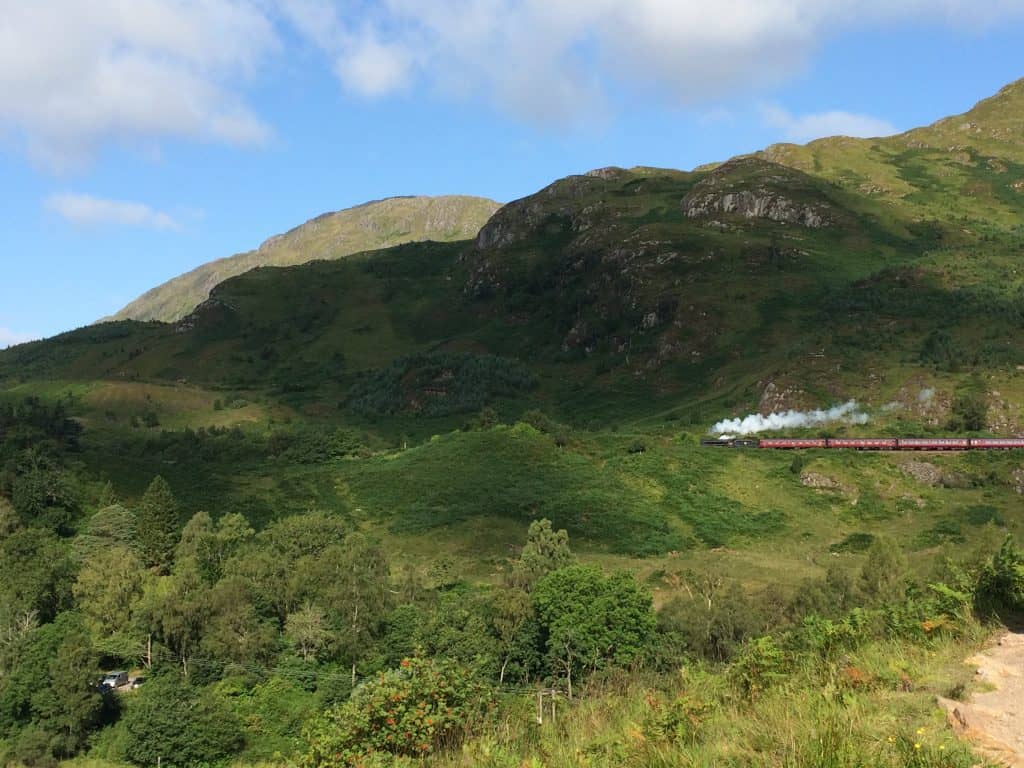 The whole thing only takes a few minutes, and then the train has rounded the bend and you’re just looking at the viaduct again.  We climbed back down and got in the car, then decided to stop in Glenfinnan for a few souvenirs.

And just as luck would have it, as we got back into our car…there was the Hogwarts Express again!  All three of us frantically grabbed our cameras and started snapping away.

My mom got a video, and my little nephew watched the “choo choo” video about 47 million times when they got home… 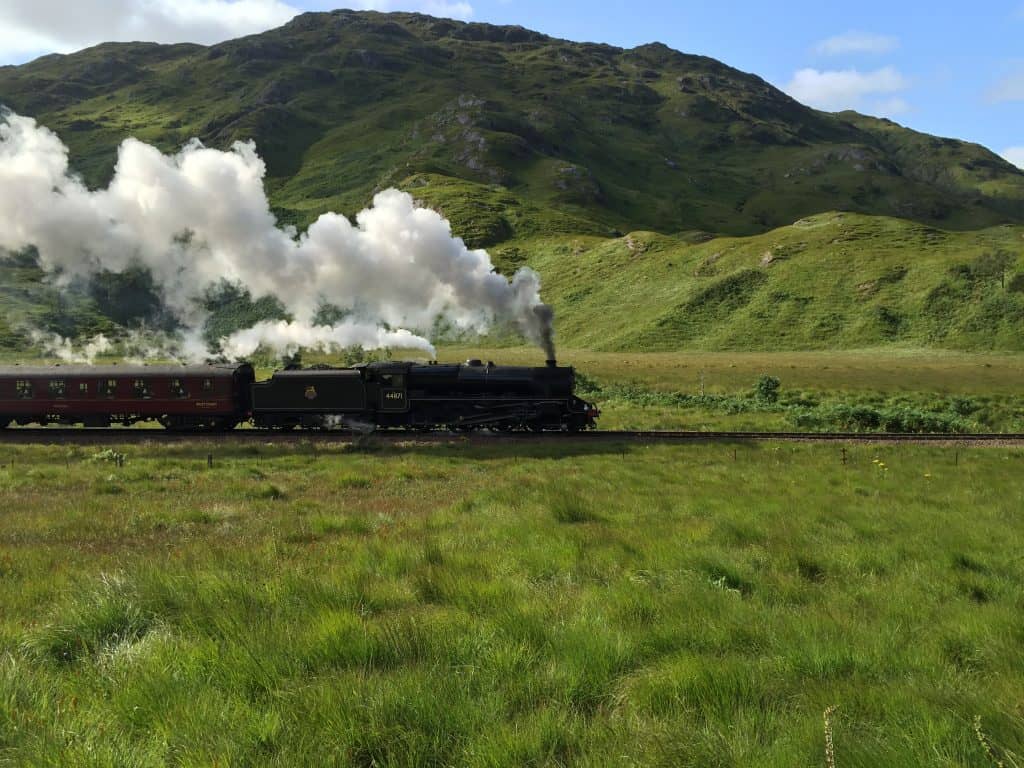 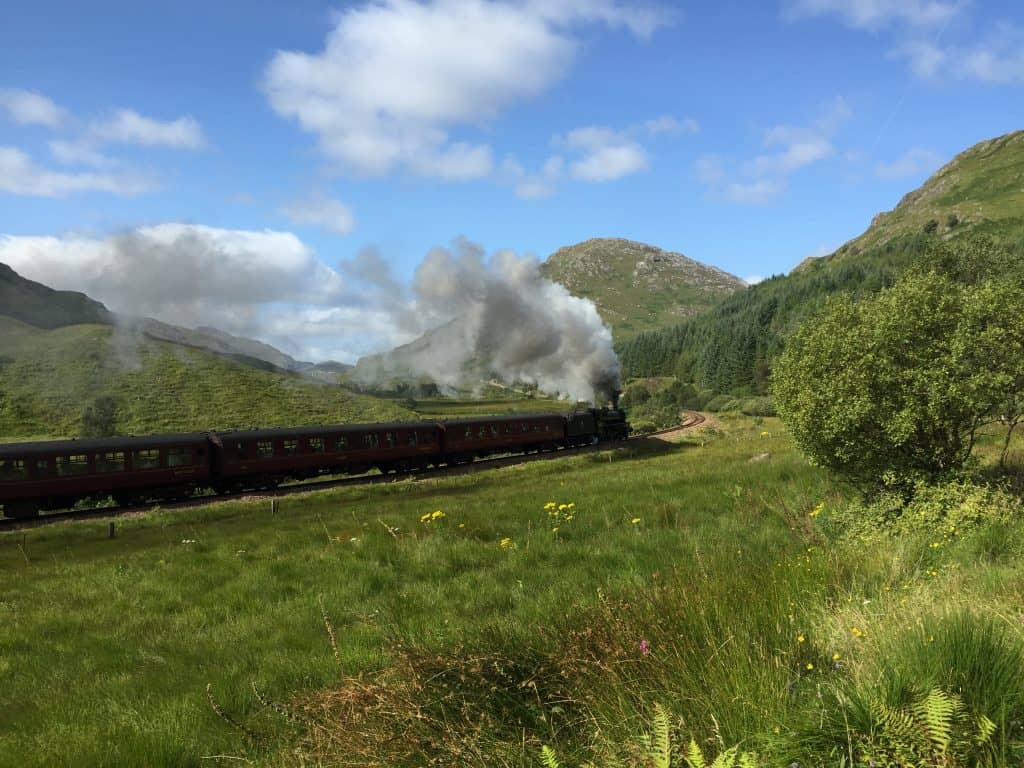 While my parents literally don’t know anything about Harry Potter, they still enjoyed getting to see the train…it’s pretty cool to see a steam engine like that in today’s world!

After leaving the Glenfinnan area, we headed along a super winding road and finally arrived in Lochaline, where we took the ferry over to Fishnish, on the Isle of Mull.

You can see more about our drive through Mull in this post, and then we went straight from there over to Iona which was magical!  If you’re planning your own trip, take a look at the CalMac ferry timetables. 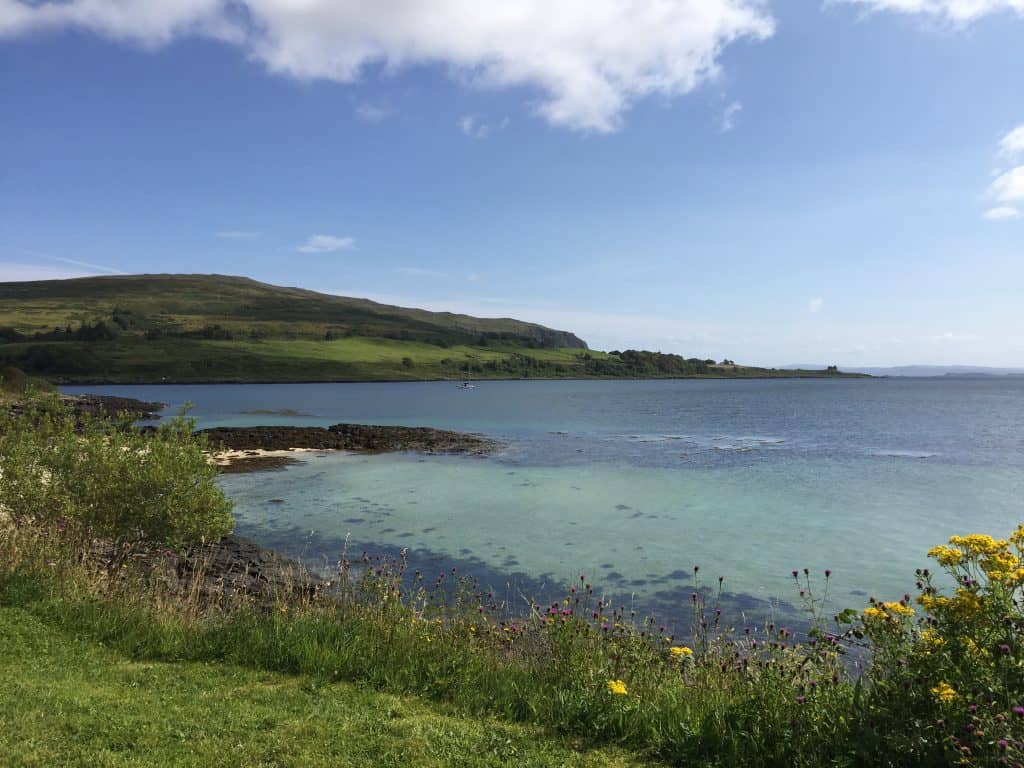 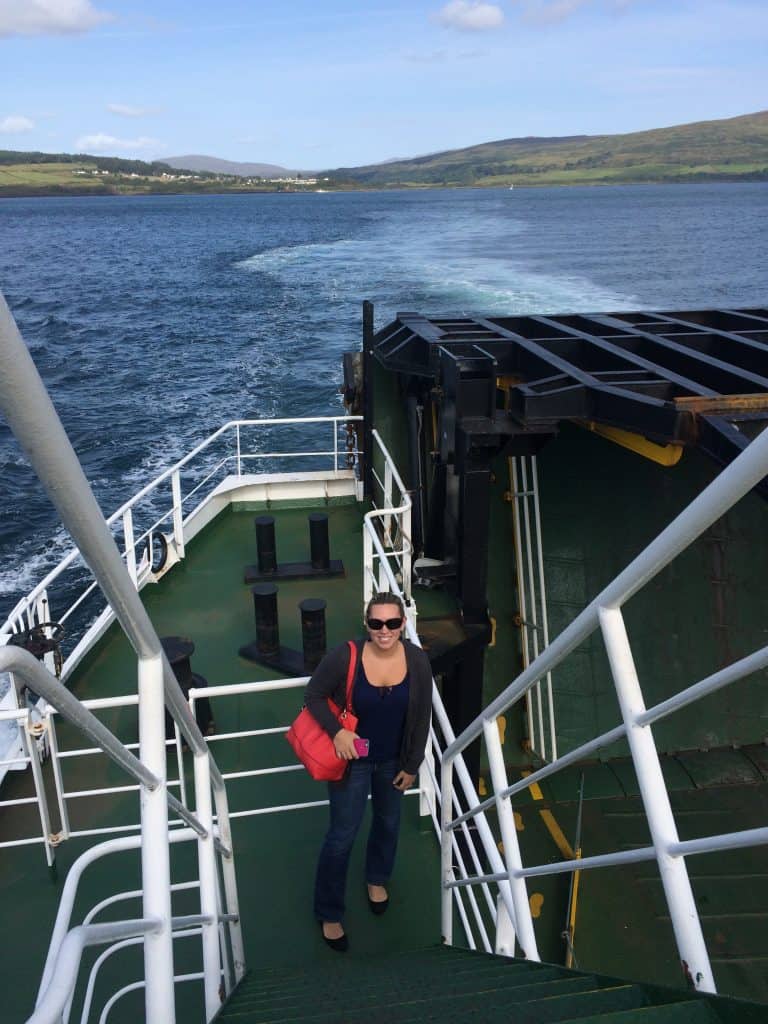 This is a great example of how a travel repositioning day can still include really great stops and scenery—as a person who hates losing an entire day to travel, this is my ideal.  Hit me up in the comments if you have any questions!

Tips for viewing the Jacobite Train (a.k.a. Hogwarts Express): 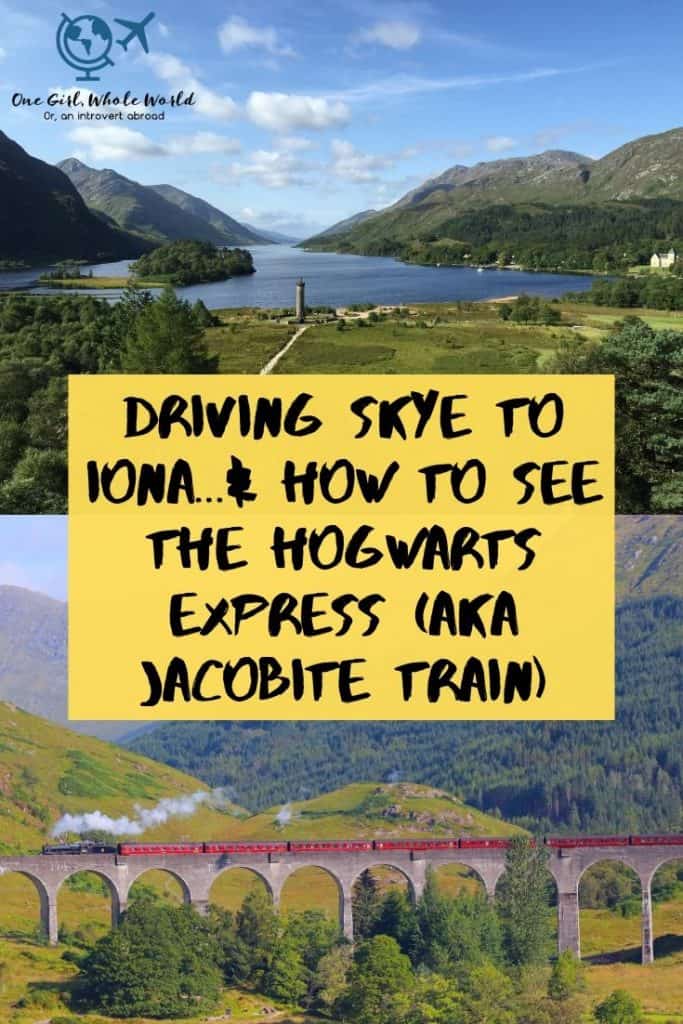 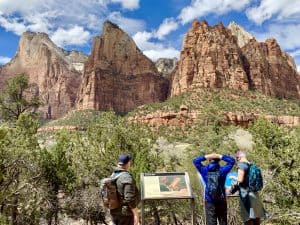 How To Spend An Amazing Weekend In Zion National Park 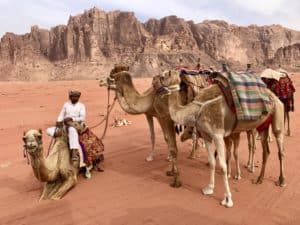 Trip Planning Tips: How To Make Every Itinerary Epic