Where The River Meets The Sea: Why Foz Do Douro Should Be On Your Porto Itinerary 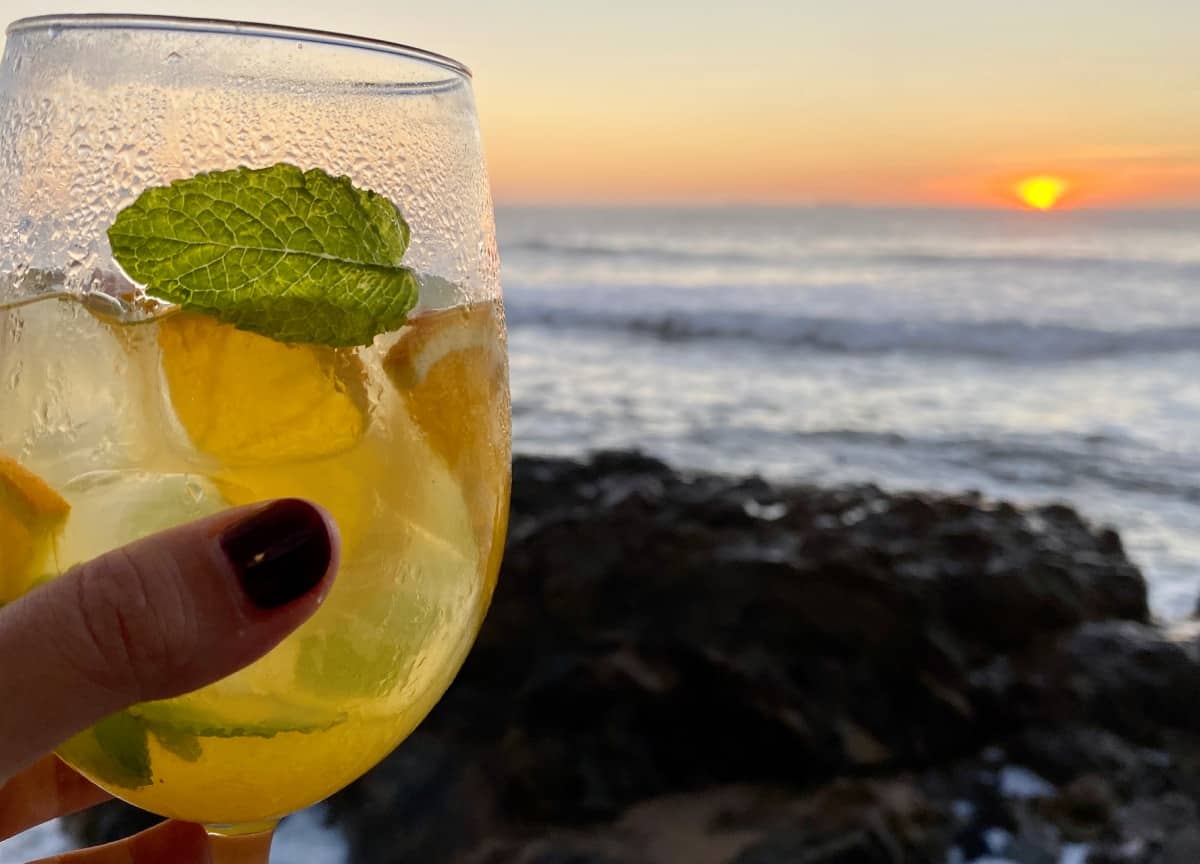 When people visit the charming city of Porto, they marvel at the colorful tiles, snap photos of historic churches, and sip tons of port wine.  But many never make the voyage just a few miles west to Foz do Douro.

Unlike the wide placid Douro River views in Porto, in Foz do Douro you’ll get the real power and raw beauty of the Atlantic Coast…crashing waves and vivid sunsets, with nothing between you and North America. 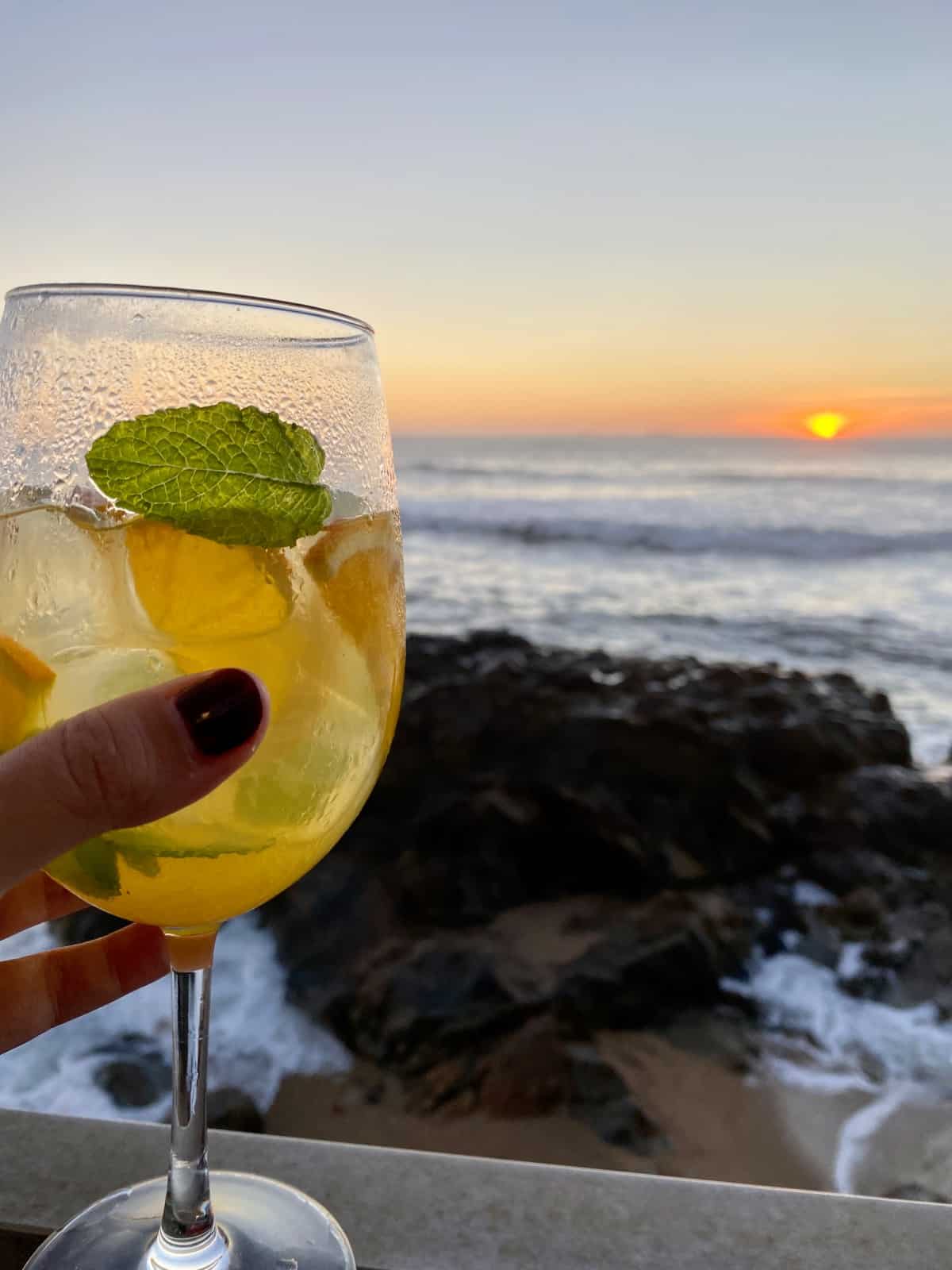 With a millennia of its own history (you can read a tiny bit of it here) and a few centuries as a popular “sunbathing for health” destination for Brits and Portuguese, today, Foz do Douro is known for its sandy beaches, affluent residents, pounding surf and rolling waves, and eclectic restaurants and boutiques. 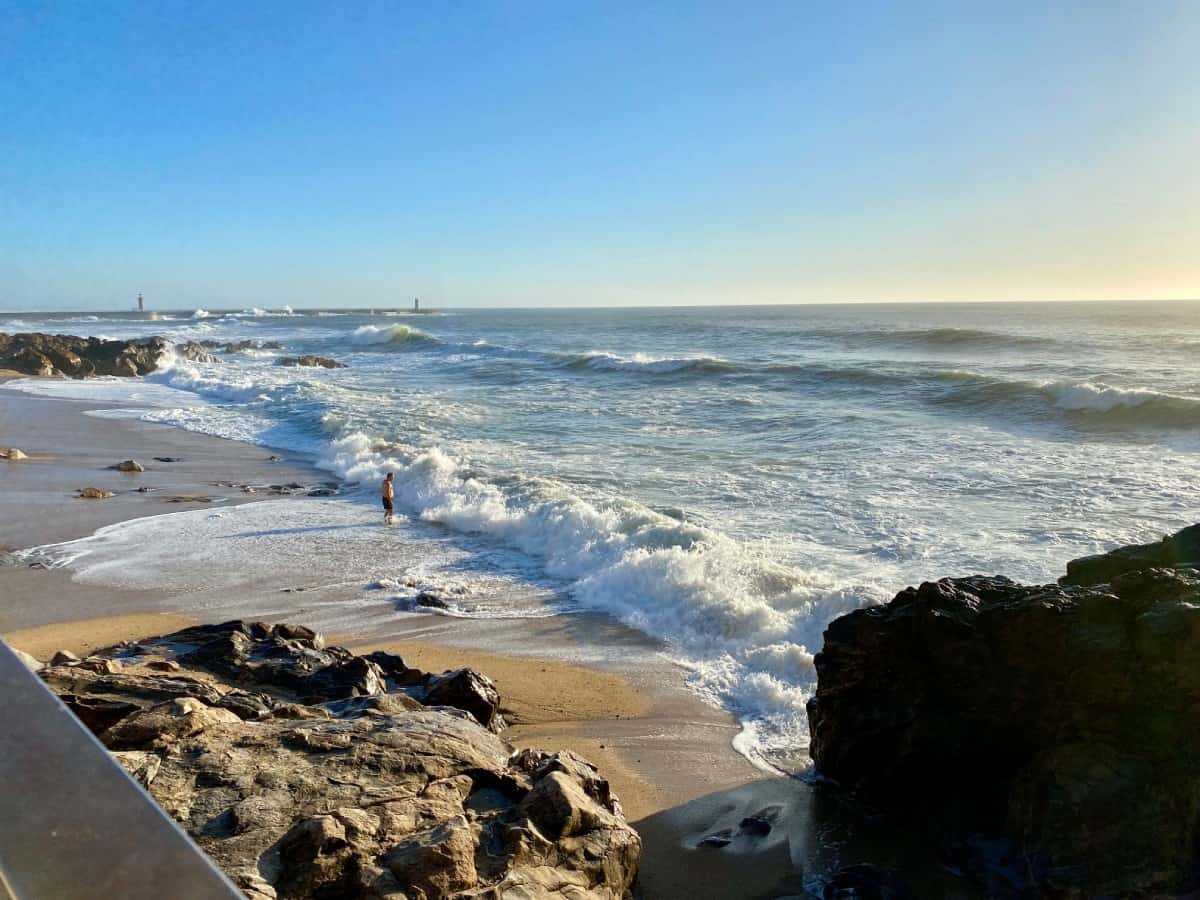 Where To Stay In Porto:  Le Monumental Palace (Maison-Albar)

What To Do In Vila Nova de Gaia: Sipping My Way Through The Port Houses Of Porto

Why You Should Visit Restaurant Vinum In Vila Nova de Gaia

What To Do In Portugal’s Stunning Douro Valley

An Amazing Lunch At Castas e Pratos in Regua

Experiencing A Slice of Portuguese Life: Market Day In Amarante

Where to stay to visit Foz

You definitely could consider staying directly in Foz, but if you’re also trying to spend time in Porto and Vila Nova de Gaia, I wouldn’t recommend that…you’ll end up spending a lot of time zipping back and forth.

Instead, stay in the heart of Porto, which has an abundance of wonderful hotel and apartment options.  Even the luxury options are quite affordable.  I stayed at Le Monumental Palace (a Maison-Albar Hotel), and HIGHLY recommend it.  It was quiet, beautiful, efficient luxury, just really great on every level and a great location.

How to get to Foz do Douro from Porto

I thought I’d kill two birds with one stone and take the iconic #1 tram out there.  I waited and waited, was the first person there.  But since there’s not a clear place to line up, I got shoved out of the way by a bunch of families strollers and couldn’t get on.  So I grabbed a $5 Uber instead.

How far is Foz do Douro from Porto?  It’s about 5 km, and takes 10-15 minutes by car depending on traffic.  It’s a beautiful drive along the river as well. 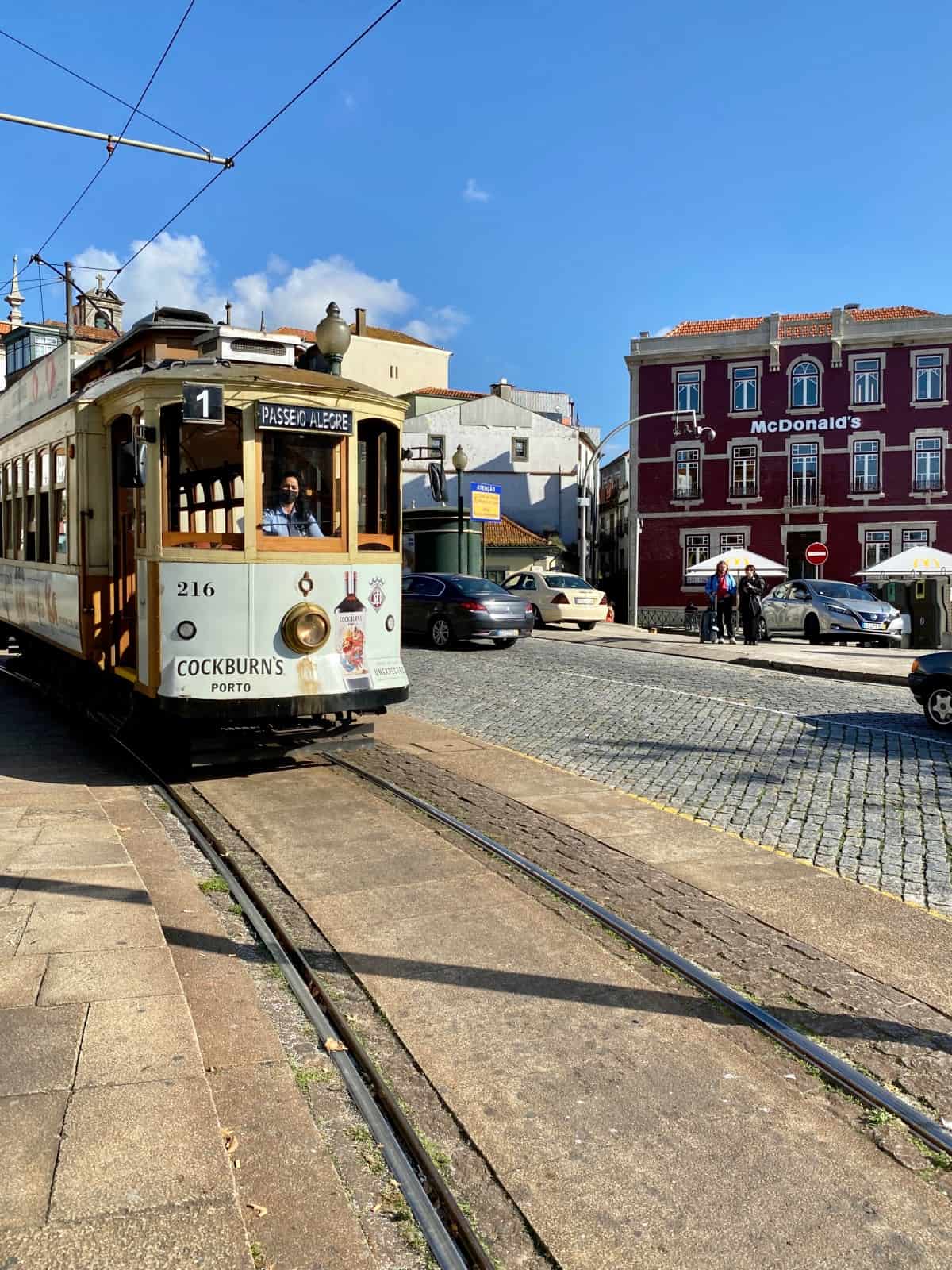 What to do in Foz do Douro

I’ll start by saying that I didn’t get to explore Foz as much as I’d have liked, because I visited on a whim on my last afternoon in Porto.  So it was hard to figure out plans at the last second and I ended up just wandering…going with my heart.

I didn’t exactly know where to have the driver drop me off, so I chose Jardim do Passeio Alegre, which is right near the little lighthouse and on the closest end of Foz to Porto.  I enjoyed a beautiful afternoon of sun, sea, and spray from the wind whipping around me.  I watched the giant waves smash into the breakers and over the lighthouse. 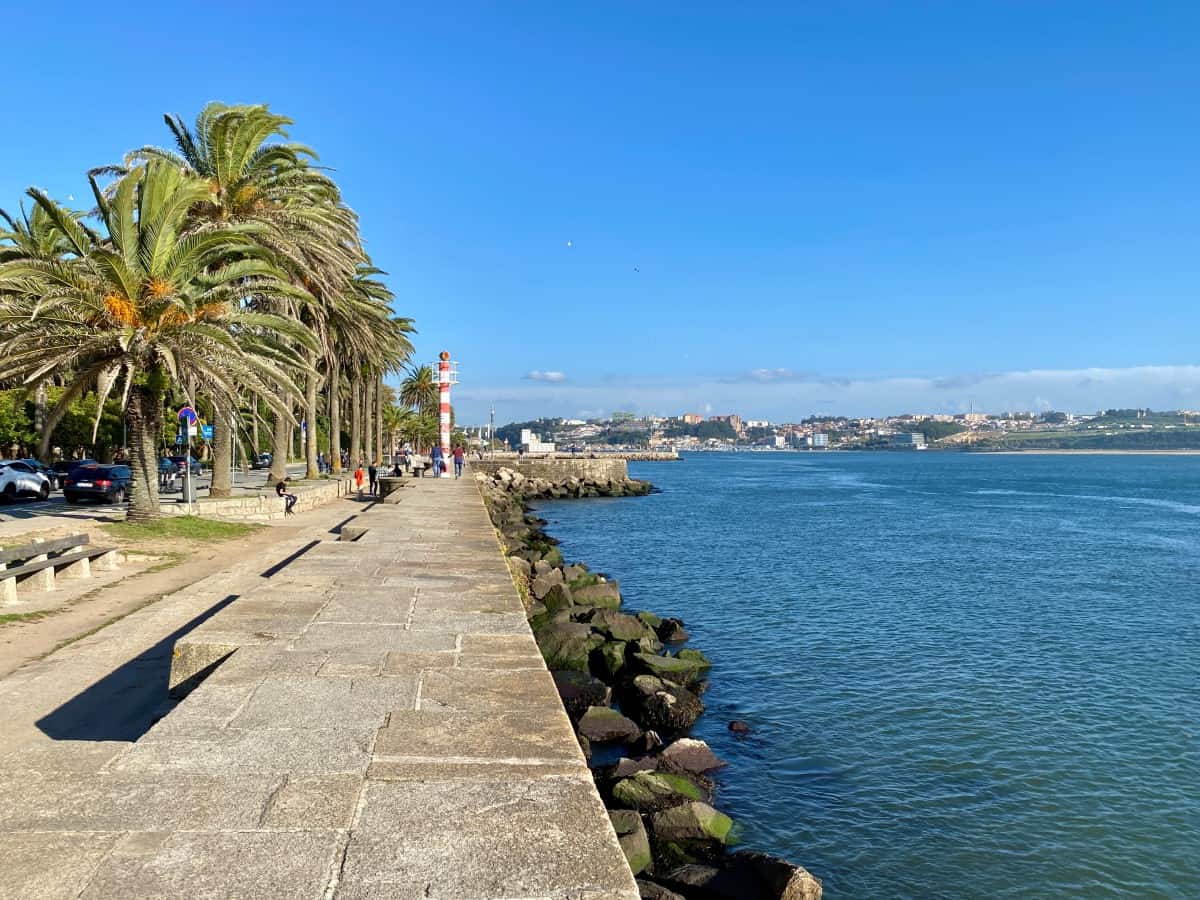 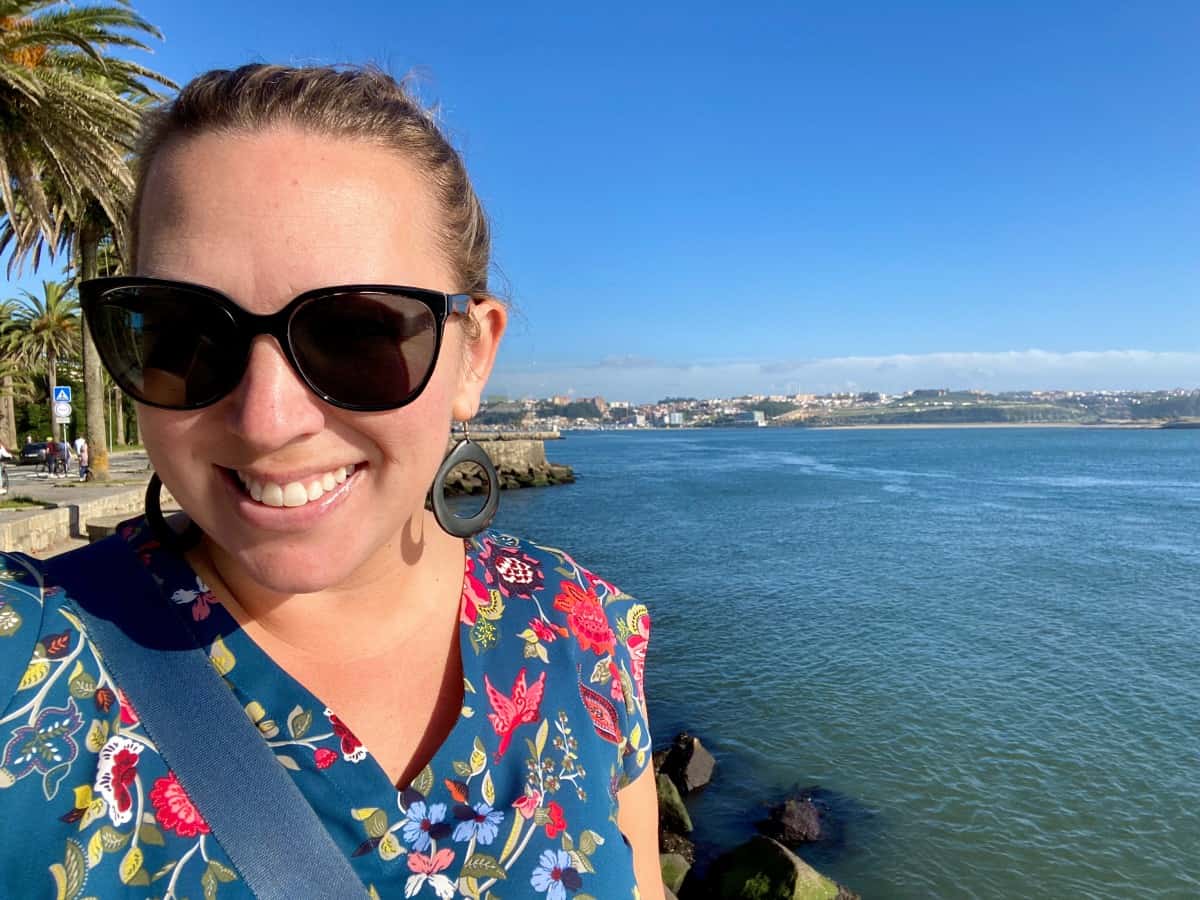 Foz houses numerous landmarks including two forts—the Fortress São João Baptista da Foz is a stronghold from the late sixteenth century built to safeguard the mouth of the Douro, and Fort of São Francisco do Queijo (called Castle of the Cheese which I LOVE) is a small fifteenth century fort with beautiful views and dramatic crashing waves.

I didn’t get a chance to visit either (didn’t get far enough down the beach before cocktails called my name), but they look awesome and I’d definitely have them on my list. 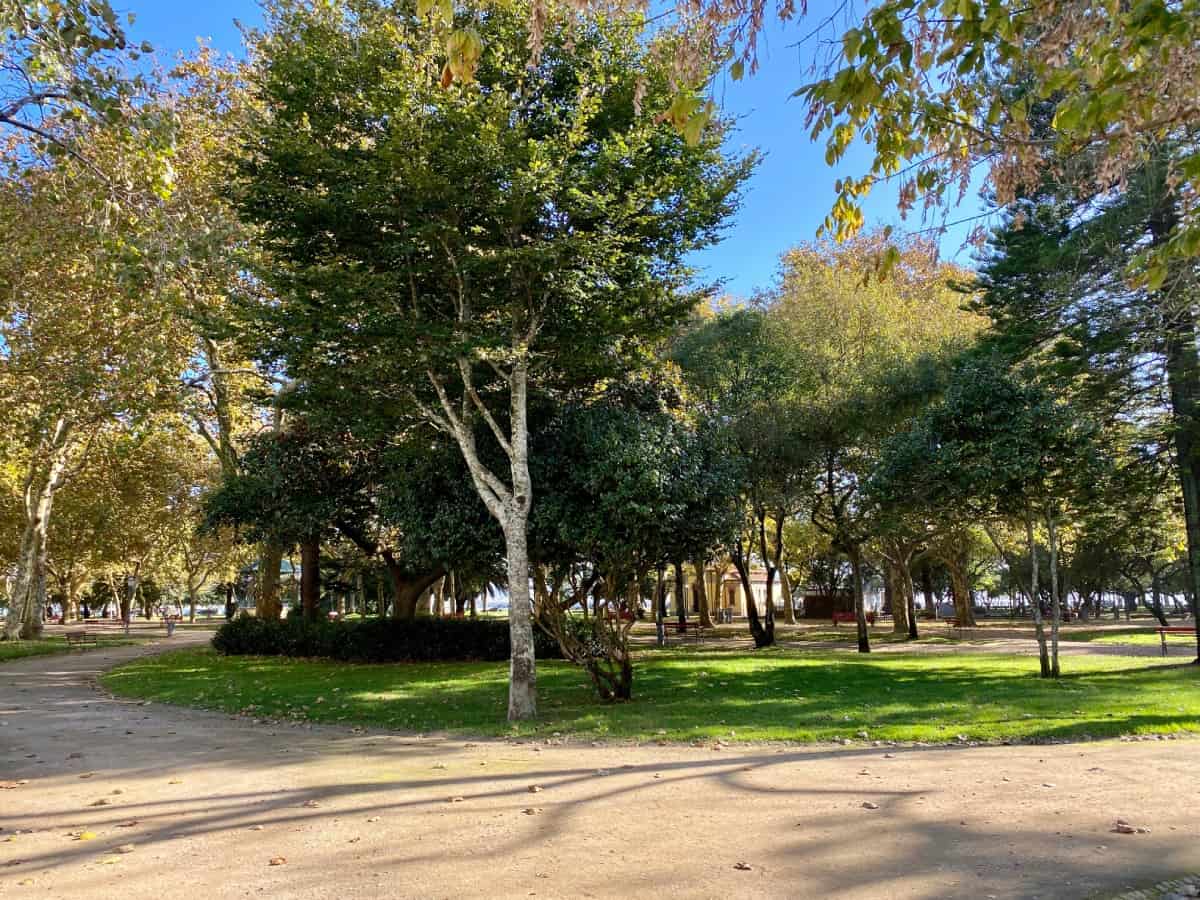 After leaving the Jardim, I headed down the coast toward Farol de Felgueiras, the lovely granite lighthouse from the mid/late 1800s.  Unfortunately that day they had cordoned off the walkway out to it, as the waves were crashing and beating over the whole pier and it would have been very dangerous.

So I gazed at it from afar and kept going down the beach (where I got a better glimpse backward, as you can see below). 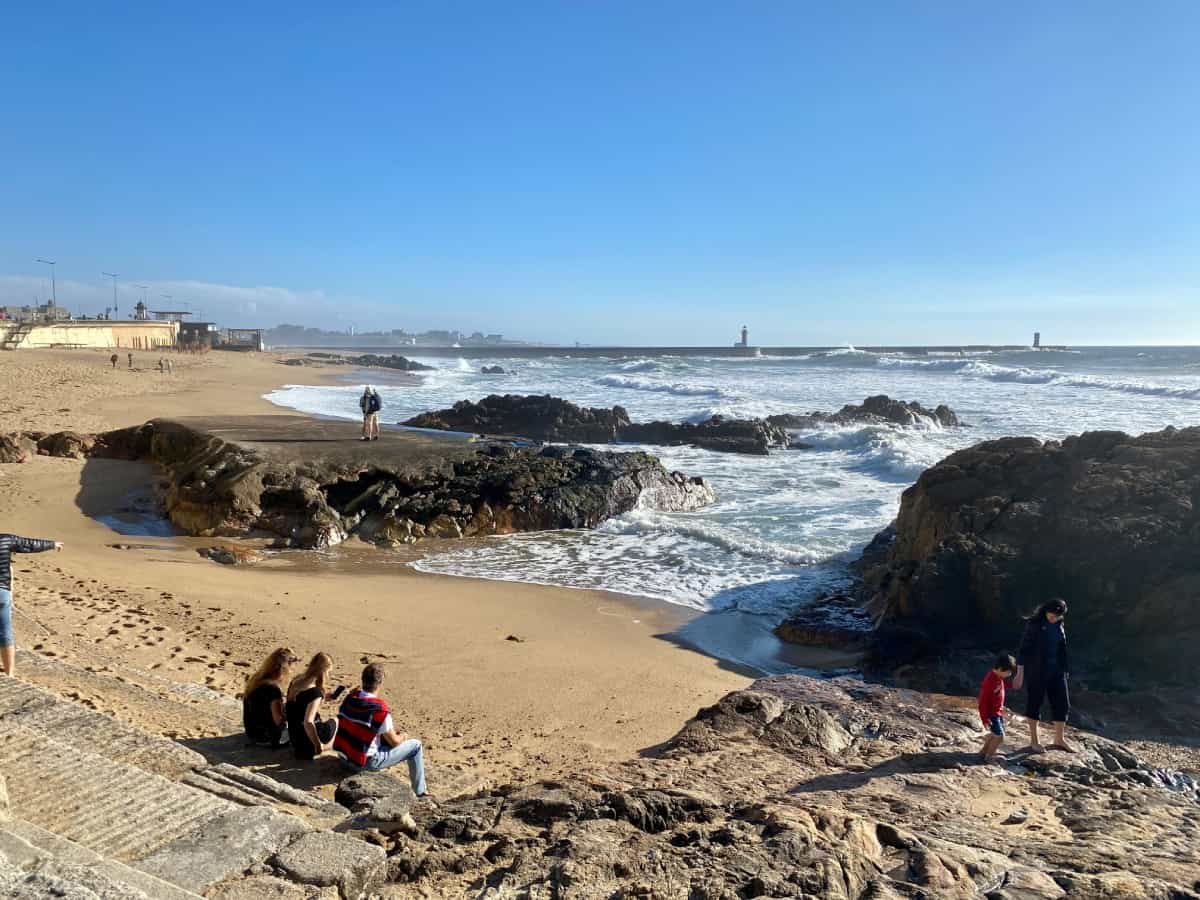 Sip a cocktail & enjoy the view

I did try to find a place to eat, as there were several highly recommended.  Many either weren’t open due to COVID, or because it was Monday, and wouldn’t be open til late evening anyway.  I tried getting reservations at a couple and was unsuccessful.  I’ve included a list of restaurants I wanted to try at the bottom of this post.

But I didn’t let that deter me.  One of the most real local things to do in Foz do Douro is finding a place along the beach to sip cocktails and have a snack.  As I walked down the beach, I spotted Praia dos Ingleses Bar Restaurante Esplanada and knew I had to park myself there. 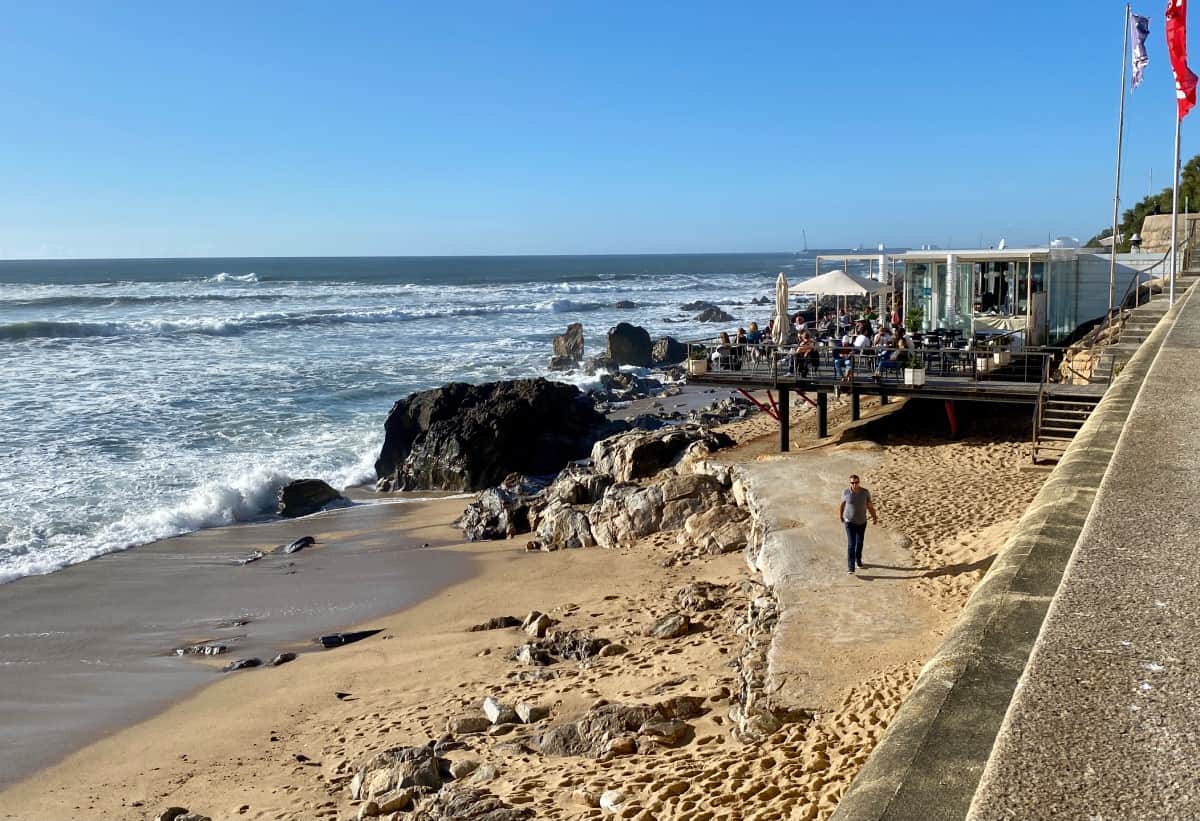 Had I known that Praia da Luz was just a bit further along, I might have gone there, but I’m still super happy to my choice to sit at Praia dos Ingleses.  It has this awesome patio hanging right out over the rocks and water.

I just wanted to sit and have a few drinks while enjoying the view and chillin’, reading my Kindle.  It took me more than 30 minutes to get a waiter’s attention and then I practically had to beg them to bring me something.

Service was abysmal, but I’m thinking that was because it was right as things were opening up after the harshest COVID restrictions.  The more recent reviews suggest that may have gotten better. 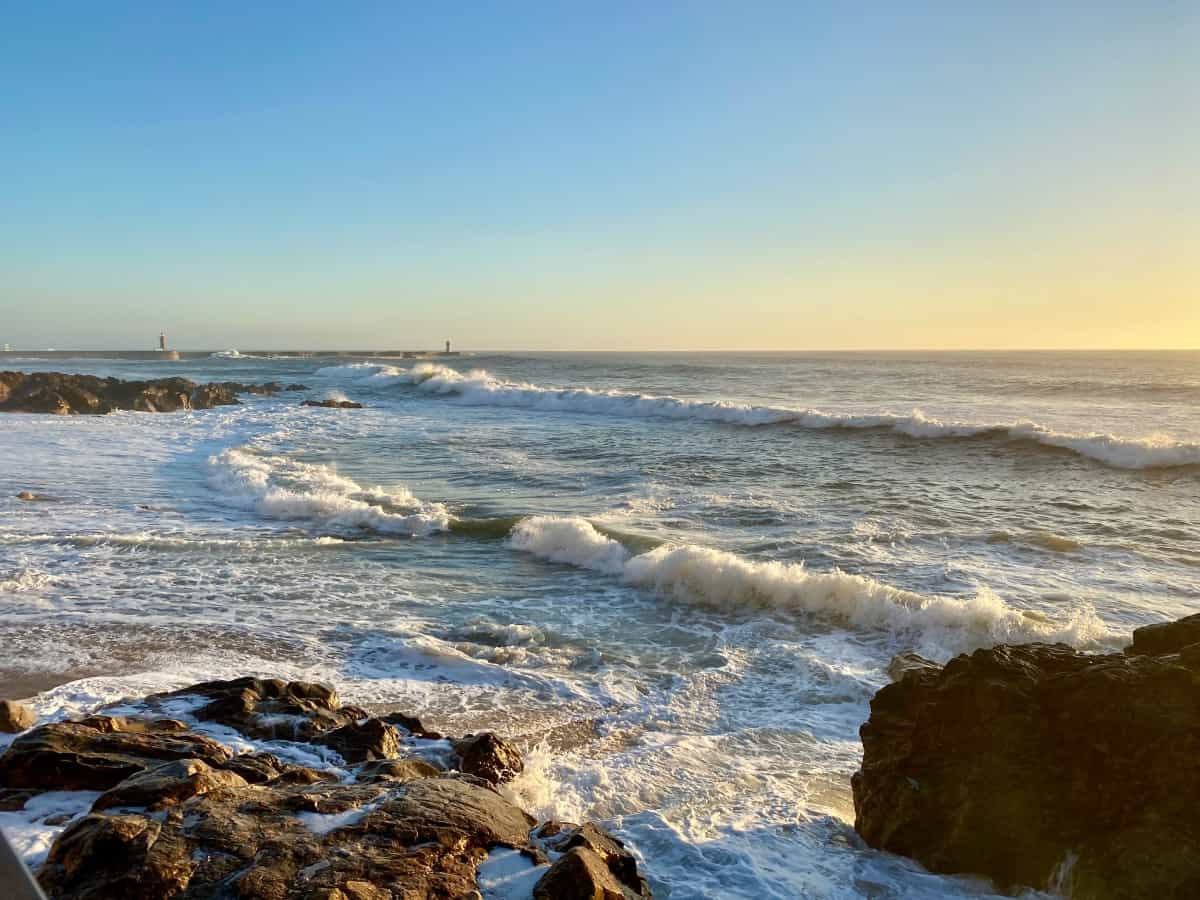 But once I got my order in, it was absolutely lovely sitting there sipping my porto tonico, having a snack, and soaking in some Vitamin D.  They offer a number of petiscos, the Portuguese version of tapas.

The fries were pretty good and the salmon toast was unique, definitely edible.  My porto tonico tasted a bit more like white sangria (which is fine), and their white sangria (which I tried next) was fine but nothing to write home about.  Drinks were good enough, and really, we’re here for the ambiance. 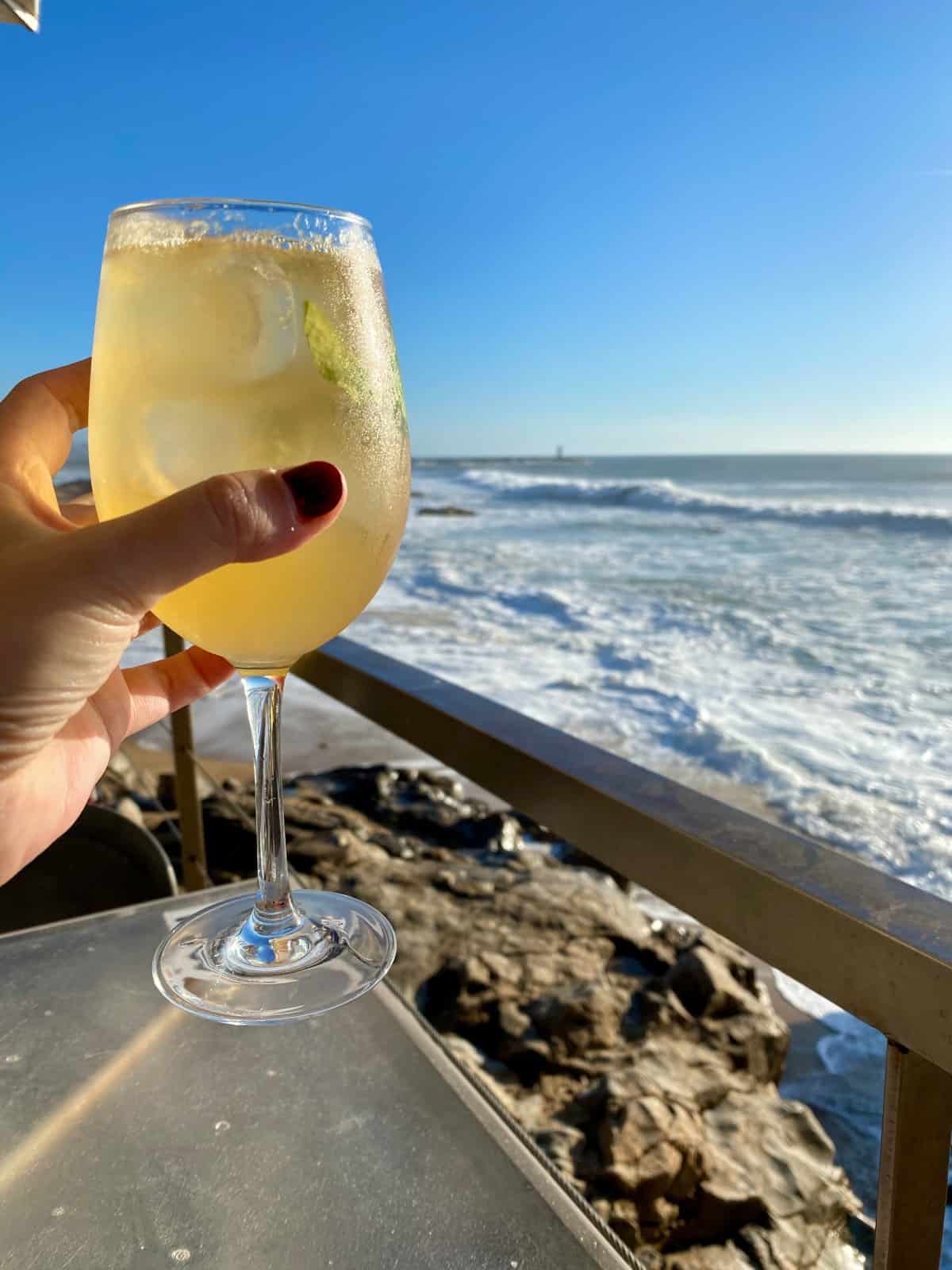 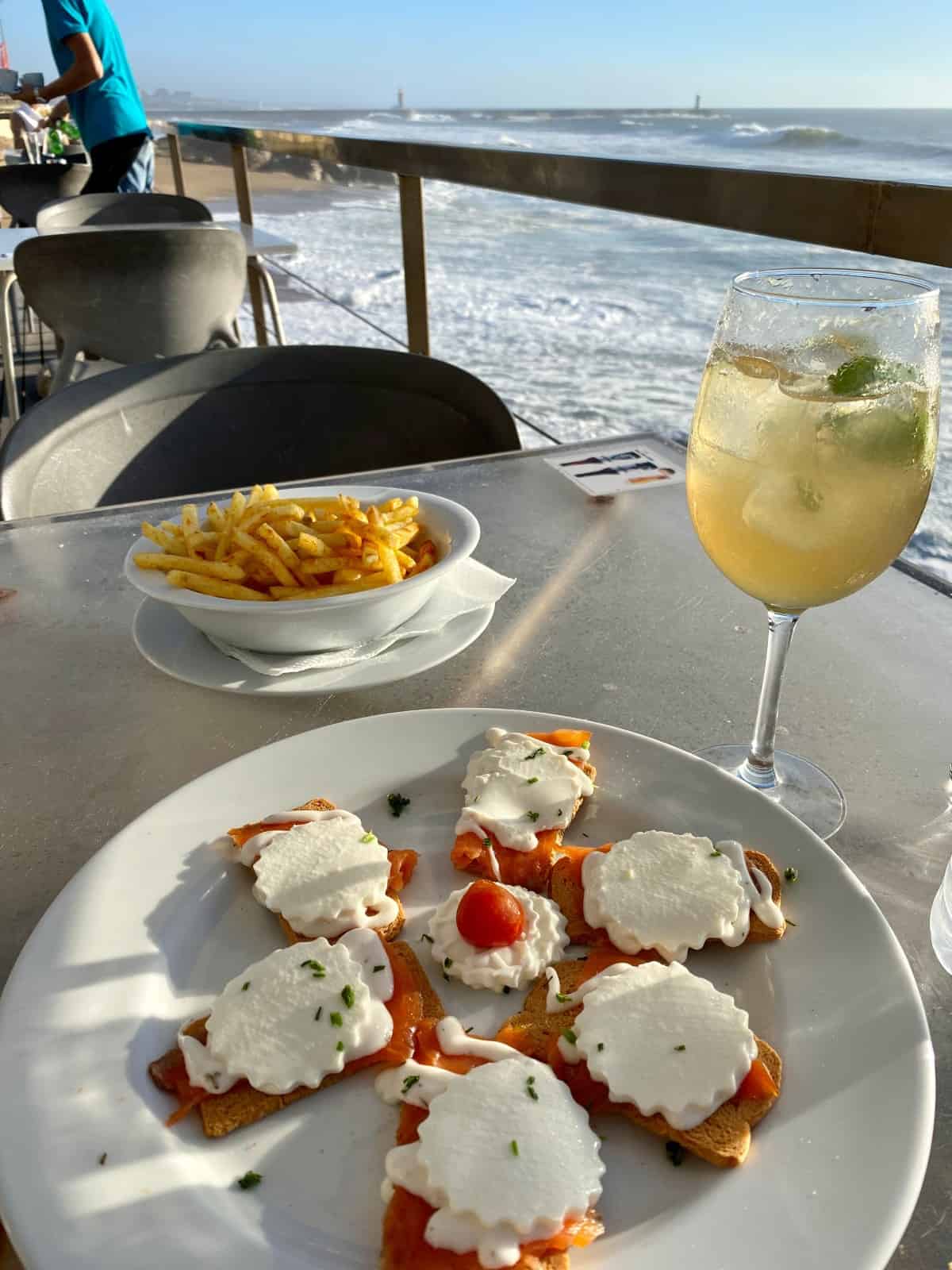 And not just the ambiance…WE’RE HERE FOR THE SUNSET!

(One tip: it gets really chilly with the wind and ocean spray, particularly once the sun goes down, so bring a jacket!) 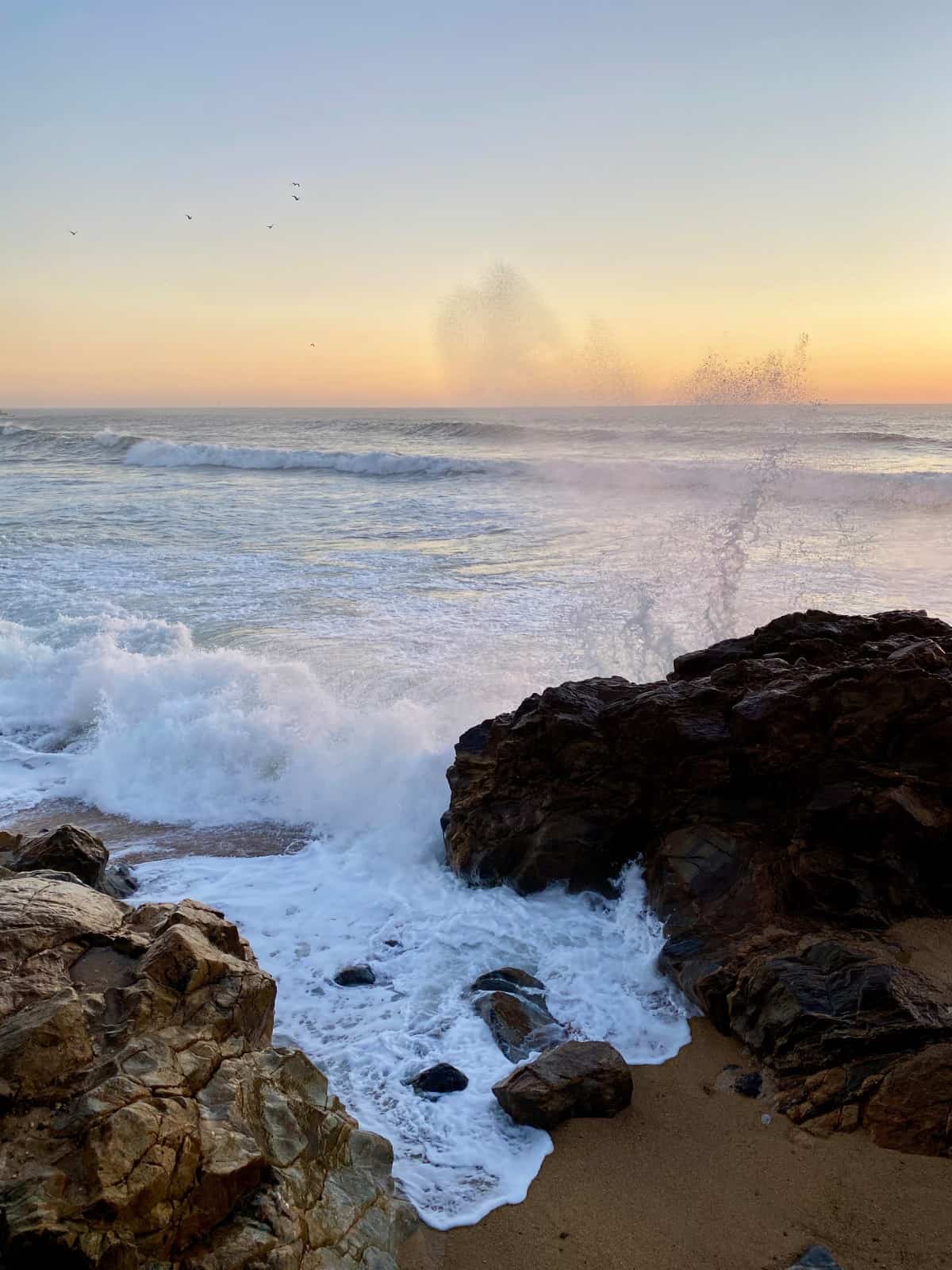 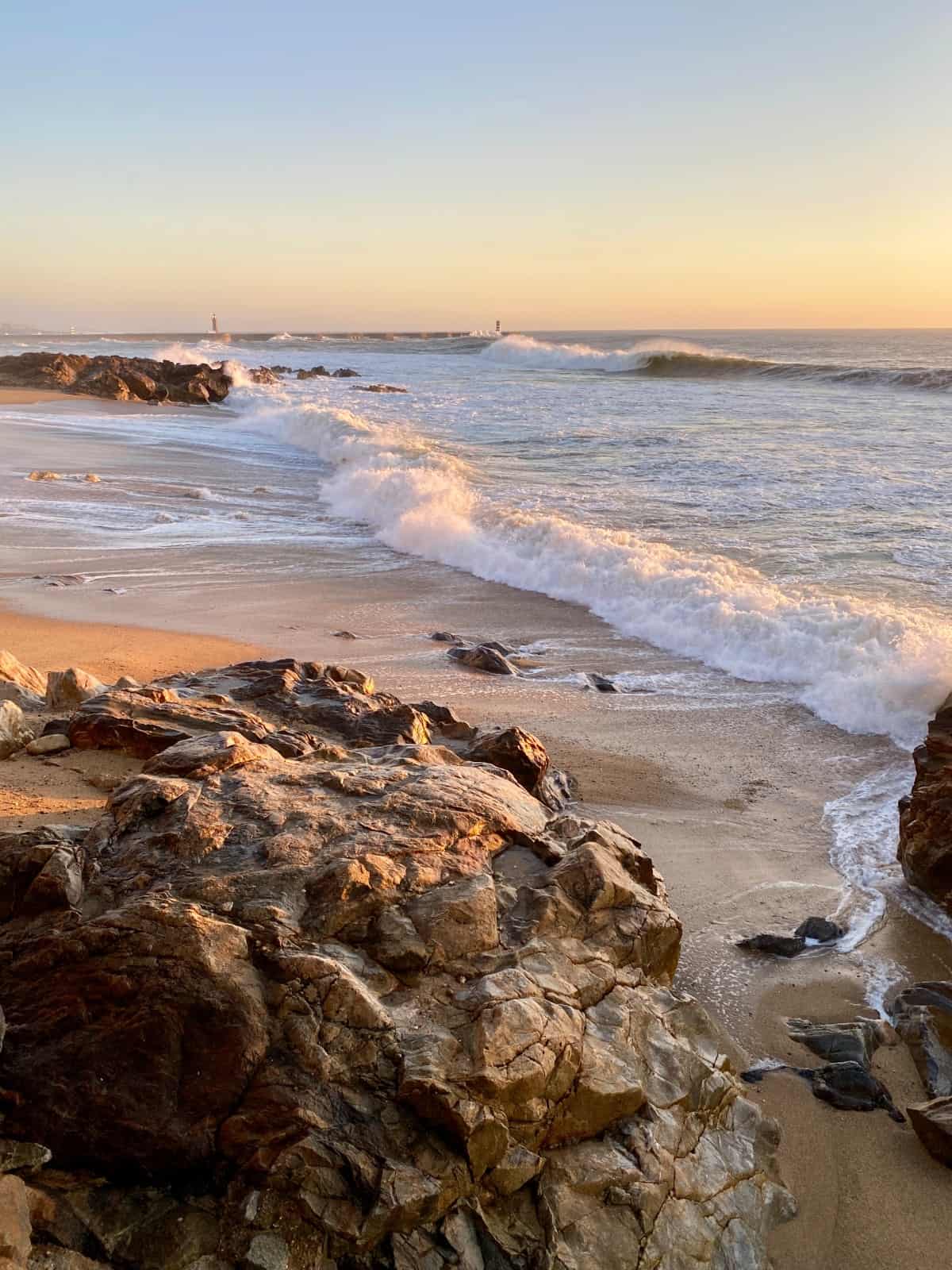 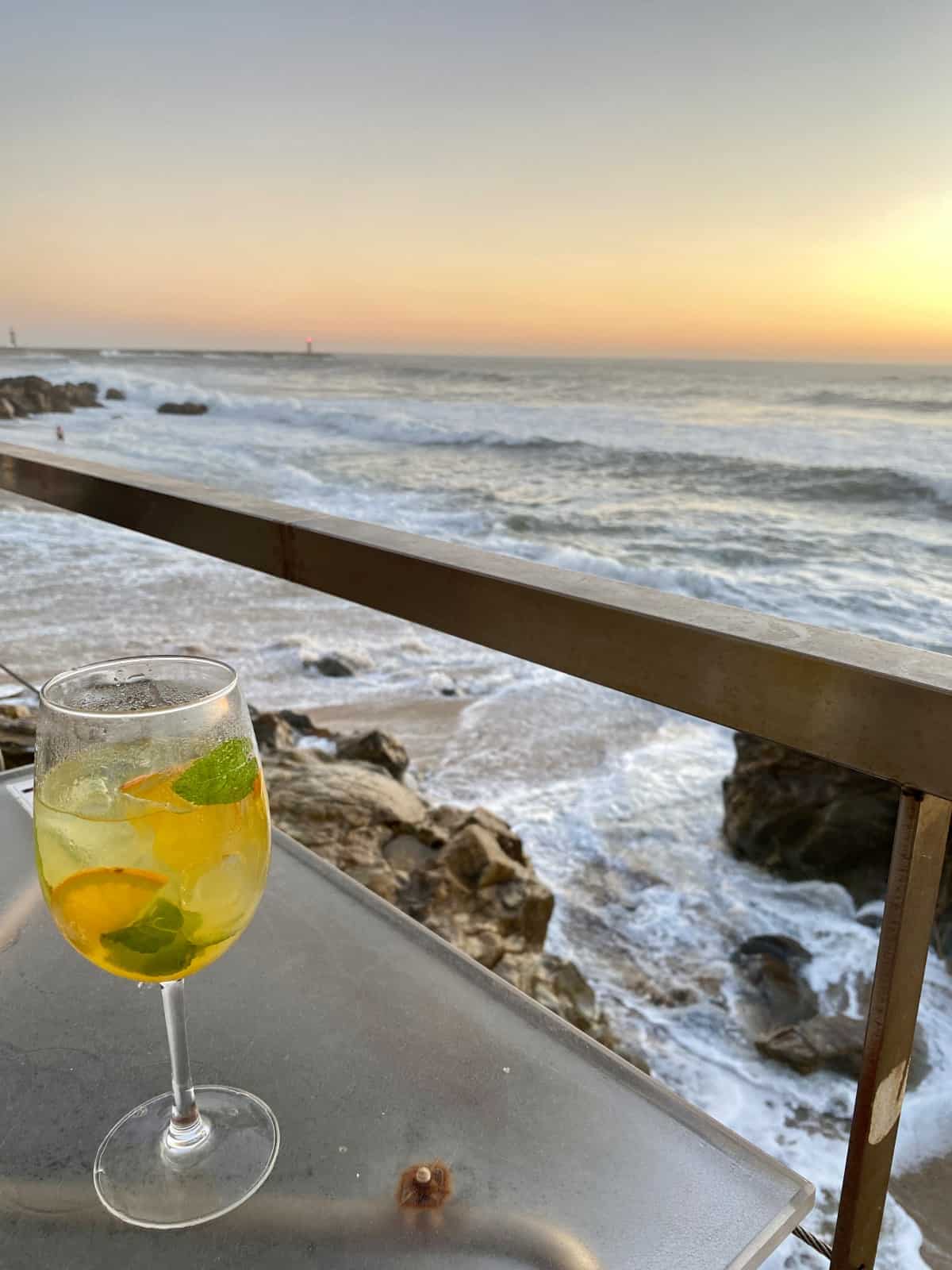 As the sun hit the horizon and dipped below, I was obsessed by the shifting shades of gold and pink, how they glinted off the sea spray.  I loved the foam as it wound around the rocks, then receded as fresh waves rolled in.

This moment of sipping my cocktail and watching the horizon darken from oranges to pearly pinks to indigo while the waves crashed around me was absolutely peaceful, and a perfect way to end my Porto adventure! 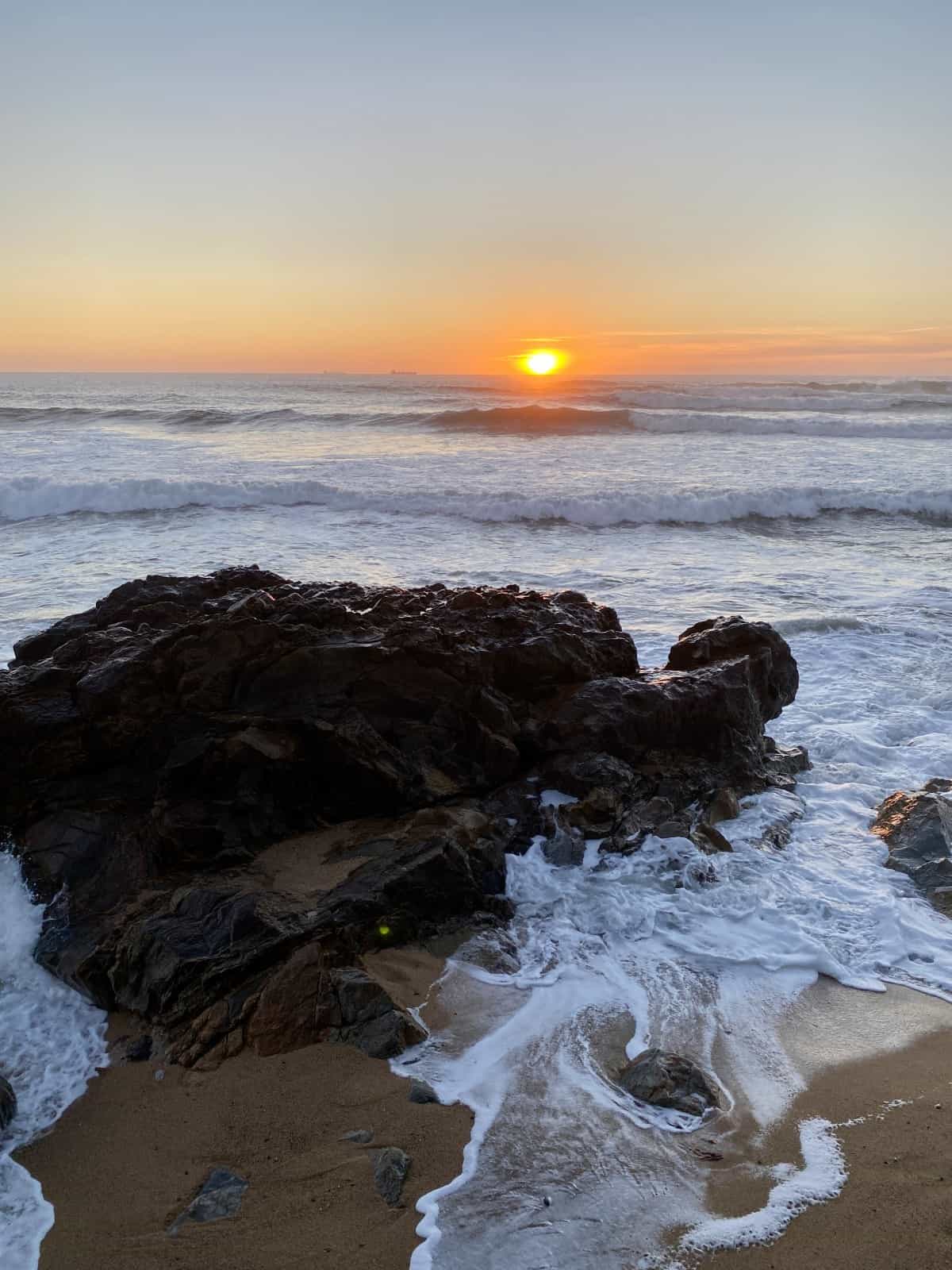 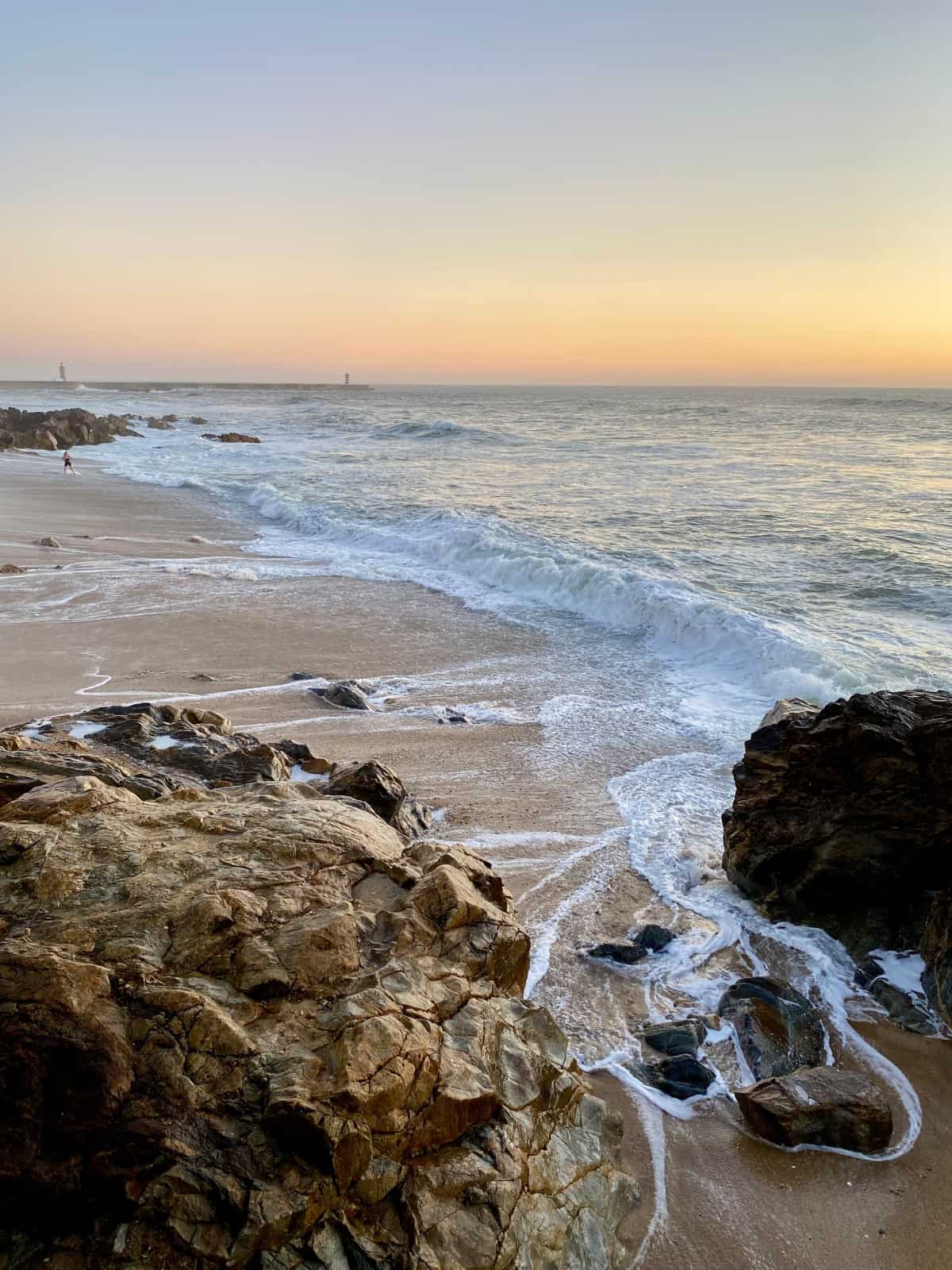 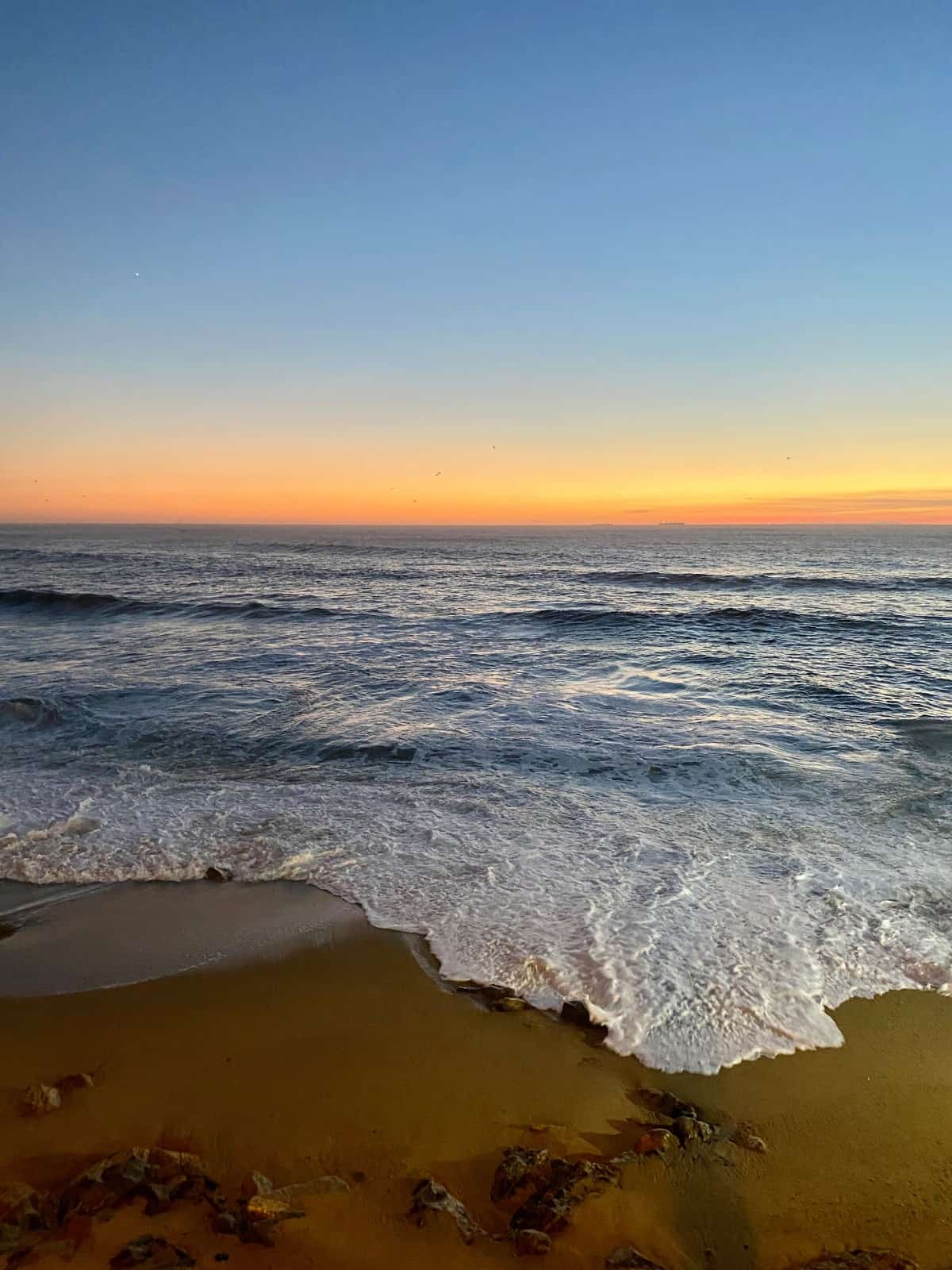 Here are some of the other restaurants you should check out in Foz do Douro, which were either closed when I visited or didn’t have reservations available.

As you can tell, I absolutely loved Foz do Douro and am so happy I included it in my Porto itinerary.  You can just go on a whim and wander like me, or plan ahead and get reservations, even spend the day there.  Either way you’ll have gotten a real glimpse of local life!

Other cities with ocean views to explore: 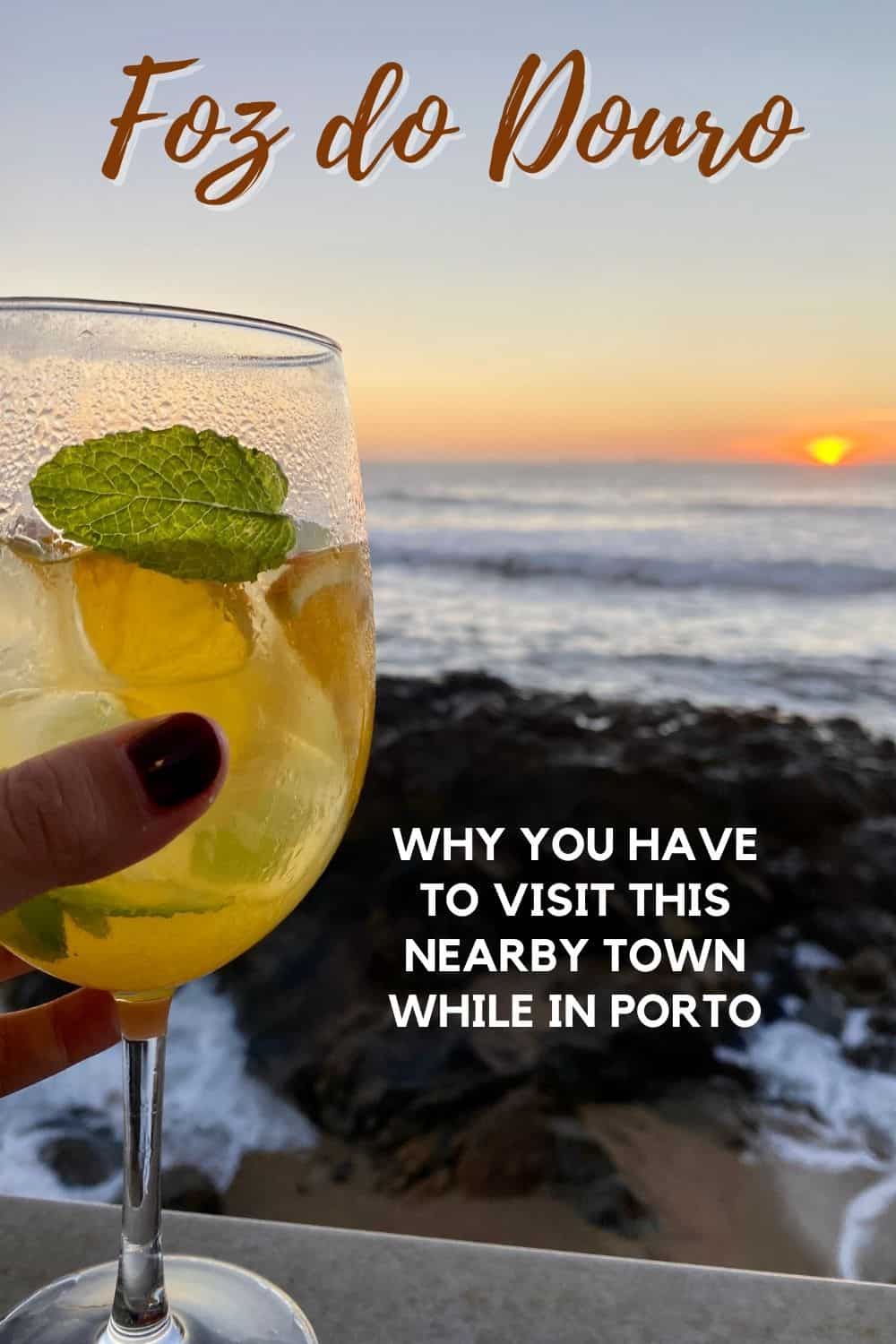 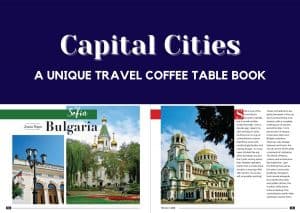 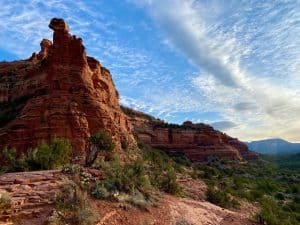 What To Do In Sedona: How To Plan An Awesome 3+ Day Itinerary