Dinner With a Kurdish Family in Istanbul

I have a number of tried-and-true methods for getting oriented to a new country or city when I arrive.  An early morning run, hitting the subway, taking a boat tour.  All good options.  But in Istanbul we tried something new that is now my FAVORITE way—we started our visit with not one, but two, walking food tours.

We arrived early afternoon on a Thursday, so by the time we got through customs (which took forever!), got a taxi to our apartment, and settled in, it was already 4:00pm.  We’d rented off Airbnb, and once we climbed the six steep flights of stairs to our top-floor apartment in the European neighborhood (near Galata Tower), we were greeted with this gorgeous view.

Like, I could just stay here with a glass of wine and call it a day.

If you’re planning a trip, here’s my ultimate guide to a day or weekend in Istanbul!

As mentioned above, we had two different tours planned.  The second was the next morning, over to the Asian side of Istanbul and touring the markets there (amazing, would recommend in a heartbeat).  But this one we took the evening we arrived, and was a little bit different because it involved first eating dinner at a local family’s house.  So as soon as we freshened up, we headed out into the magic of Istanbul. 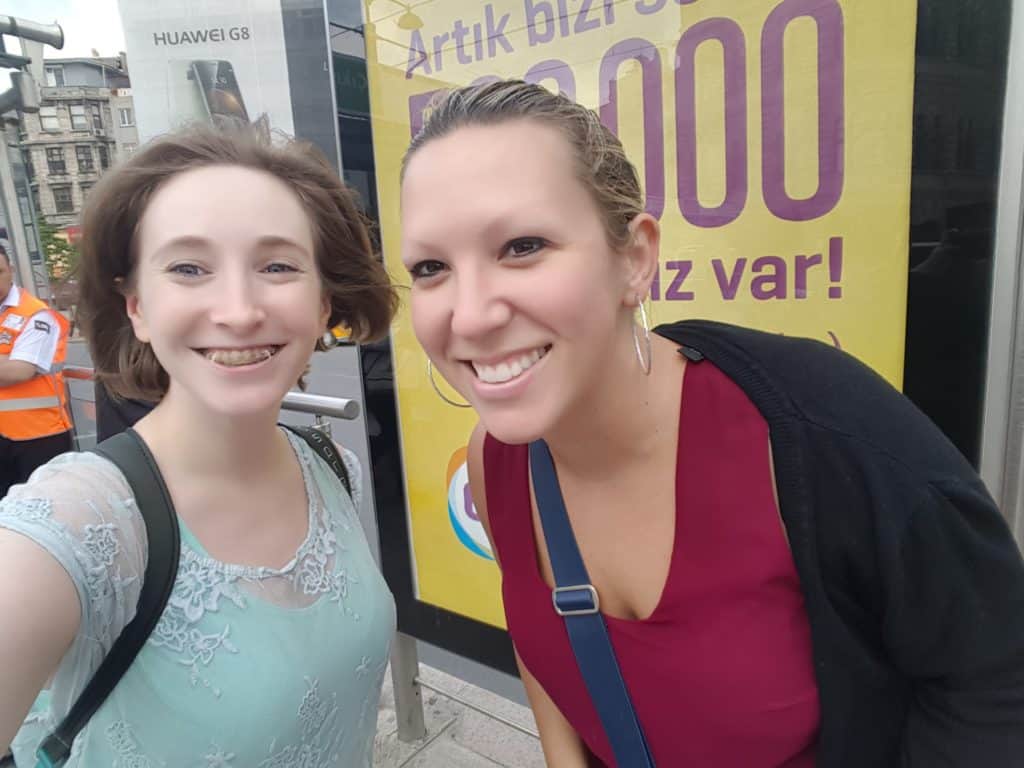 We found the tram stop just fine, but figuring out how to buy tokens was an adventure, and then we accidentally headed the wrong way.  But we figured it out pretty much immediately, got off at the next stop, and then got going in the right direction.  Actually this kind of experience is one of my favorite things about traveling, and why I always try to take public transportation when visiting a new country. 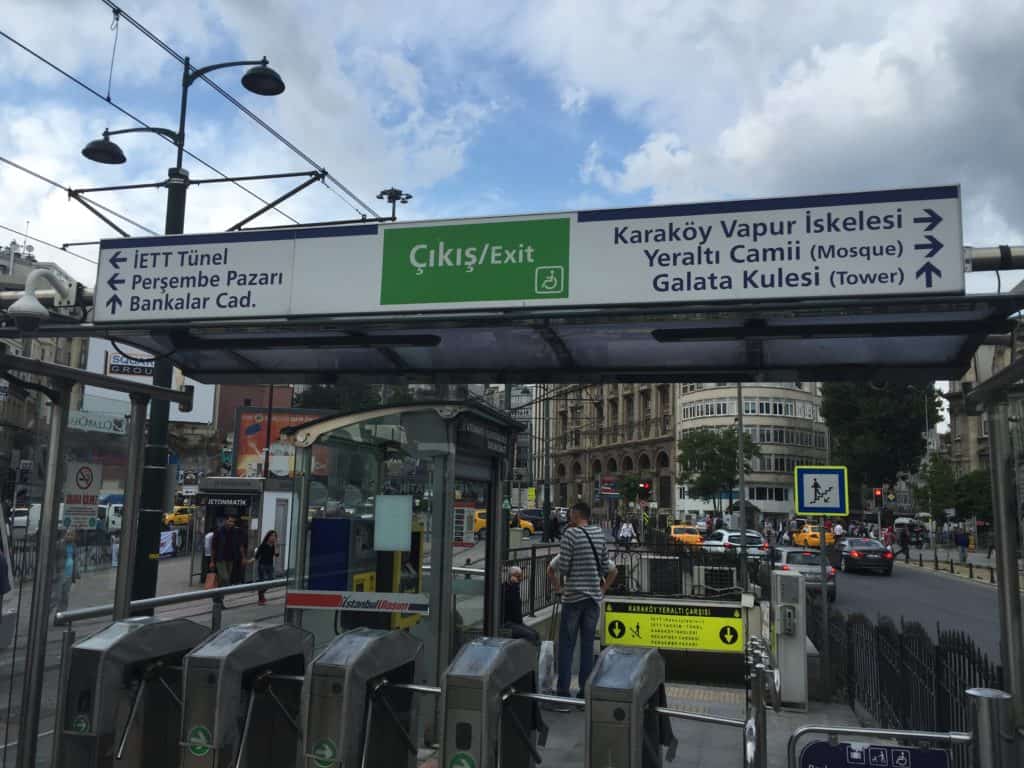 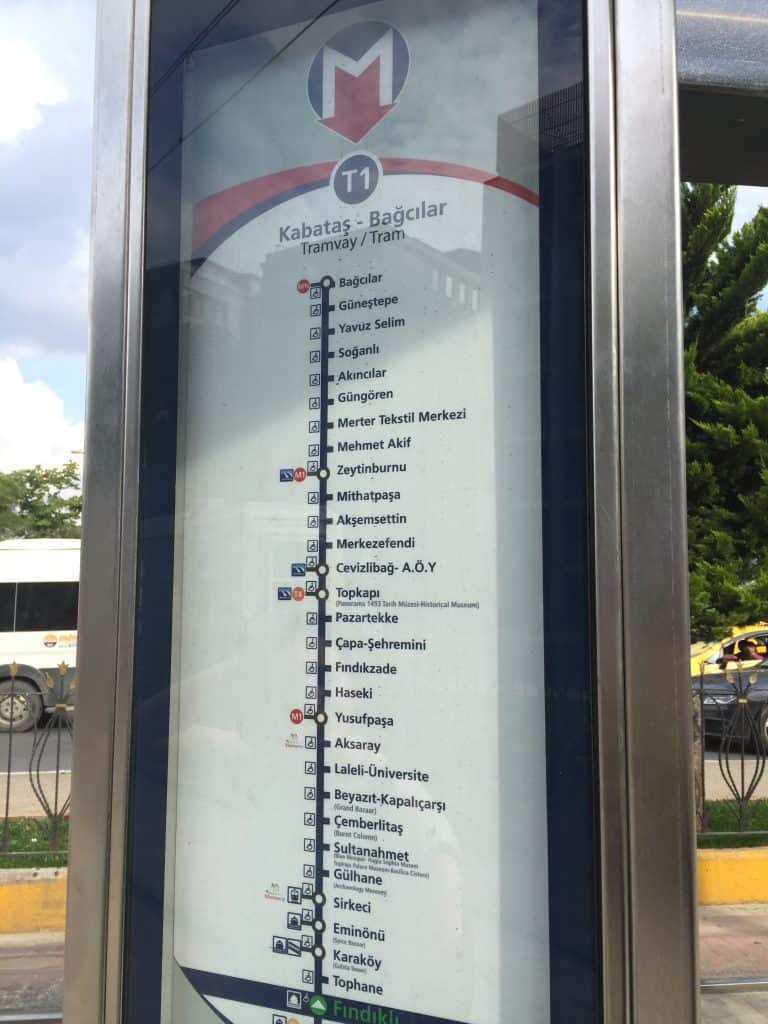 Eating Dinner with a Local Family

It was a short ride across the bridge to Sultanahmet, then we disembarked and easily found the tour meeting place just a few steps away.  Since we had some time to spare, we walked a block or two to get our first glimpse of Hagia Sofia and the Blue Mosque in the late afternoon light, then met up with our guide, Burek.

He began leading us to the family’s home, and giving us some information about Istanbul.  We were having dinner in a local Kurdish family’s apartment, and he reminded us to take our shoes off when we arrived, and how to say hello (merhaba) and thank you (teşekkür, which I kind of phonetically remember as “te-shek-oo-luhr”, though several people told us different pronunciations, so I don’t even know). 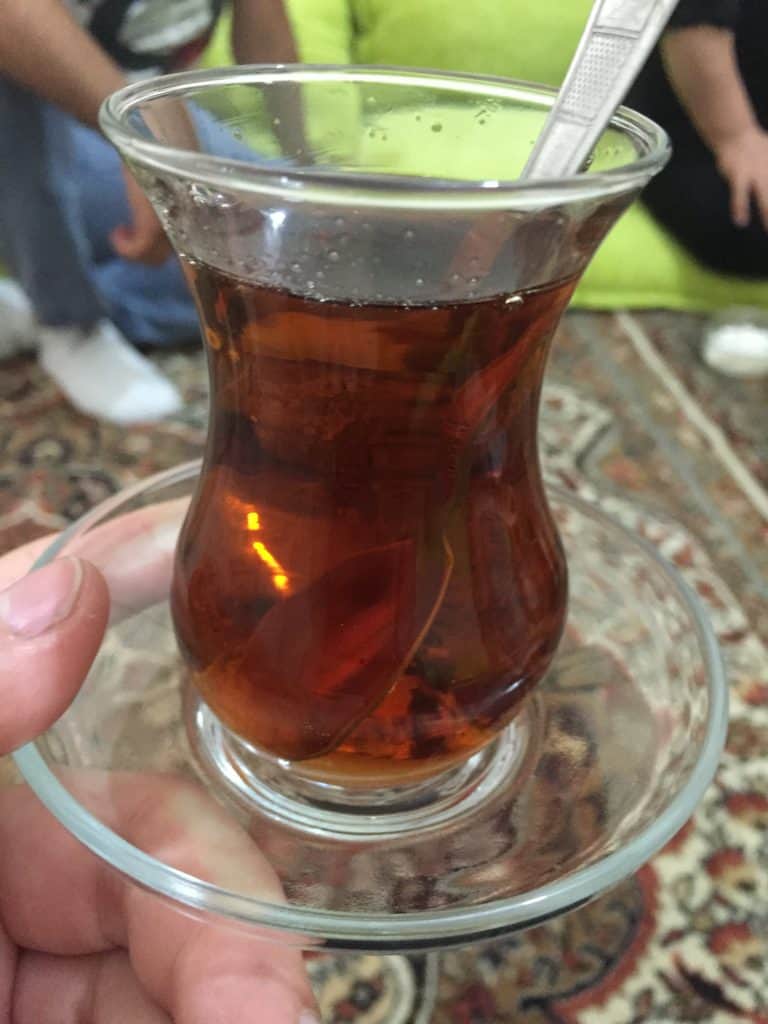 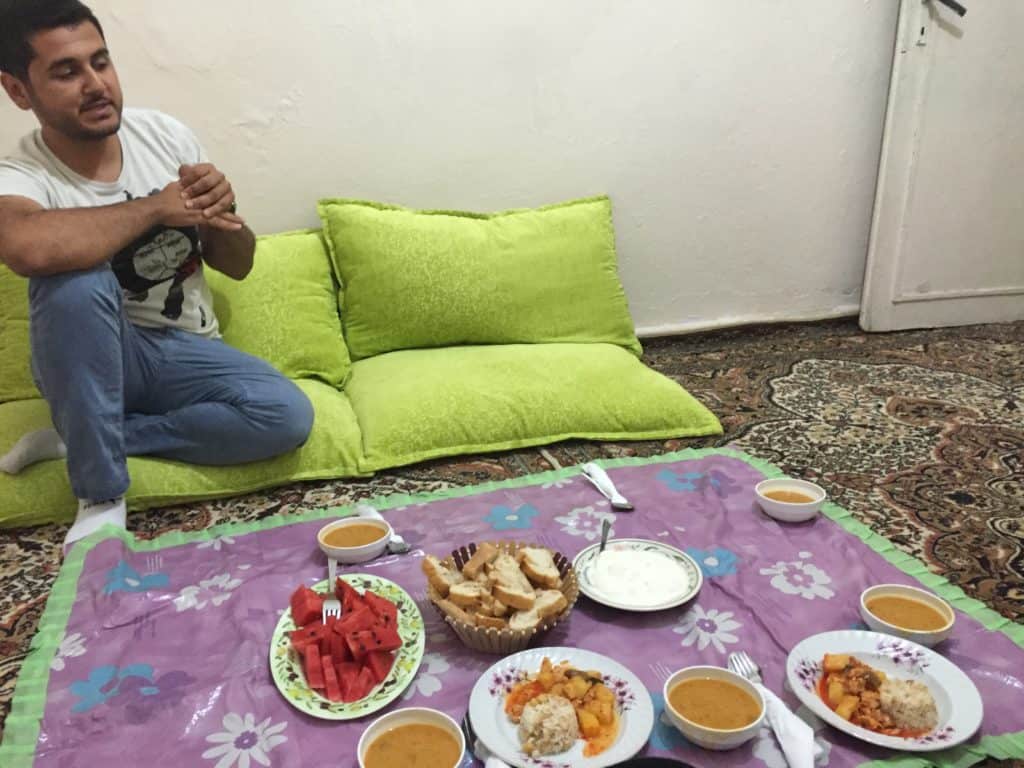 We were greeted by the family’s wife and offered hot black Turkish tea, which is customary in many cultures in this part of the world.  We sat on cushions on the floor and Burek made conversation with her, and translated some.  She didn’t speak any English, but her kids (pre-teen and teenagers) spoke a little and we got to talk to them a little bit.  The room we ate dinner in is also the room they sleep in—they just move mattresses in on the floor at night.

After a while she laid out the dishes for dinner, and it smelled amazing!  We started with a red lentil soup called corba.  Let me tell you, corba changed my outlook on lentils.  Previously, anything I’d had with lentils had just been…bad.  But red lentils are different, they’re softer than the green or brown ones, and the spices in this soup are amazing!  I actually found a good recipe for corba when I got back, and made it a ton during the winter since it’s really hearty (also contradicting my belief that soup is not a real meal, it’s a prelude to a meal…). 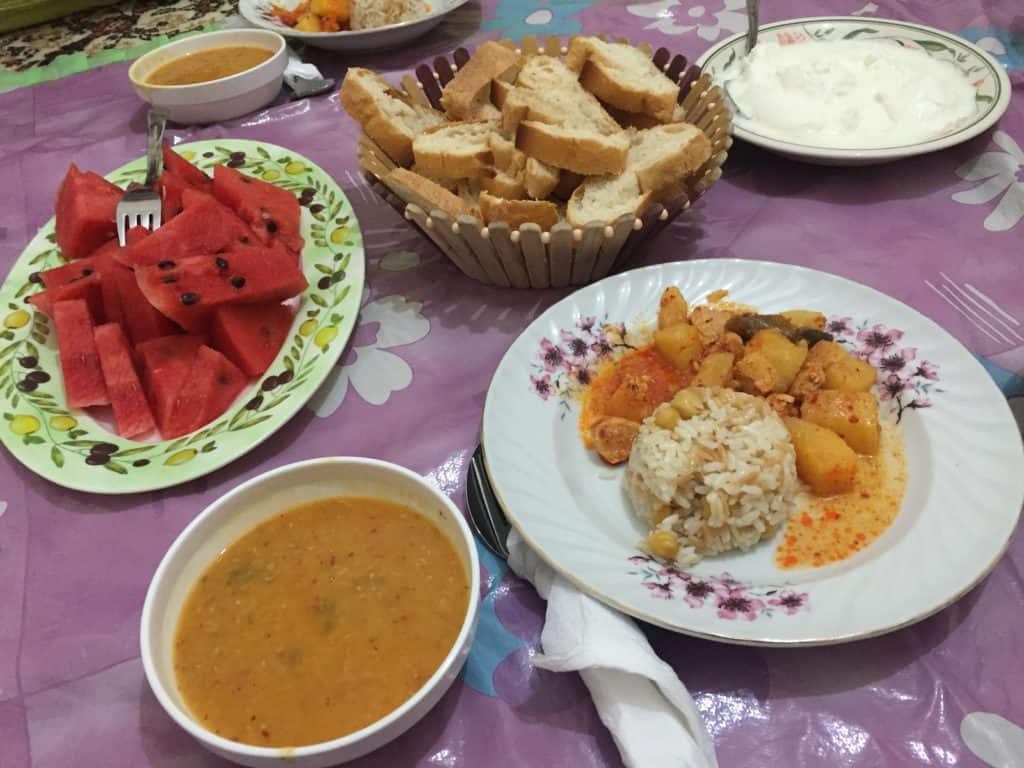 The main part of the meal was chicken and potatoes in a yummy sauce, and this pilaf/pilav thing called nohutlu, plus bread to dip and yogurt as an accompanying sauce.  They have yogurt with everything.  Dessert was watermelon (not my fave…) and then we finished with more black tea.

It was a really lovely evening, and also just very interesting.  While we ate, Burek told us about how the family had moved to Istanbul from the eastern part of the country more than a decade ago, and also a lot about Turkey as a country.

We talked quite a bit about recent events, like their issues with Russia at the time (due to a military plane incident) and how severely that and other things were affecting the tourism to the country (which is a huge part of the economy).  We definitely learned a lot, and it was a wonderful introduction to the country. 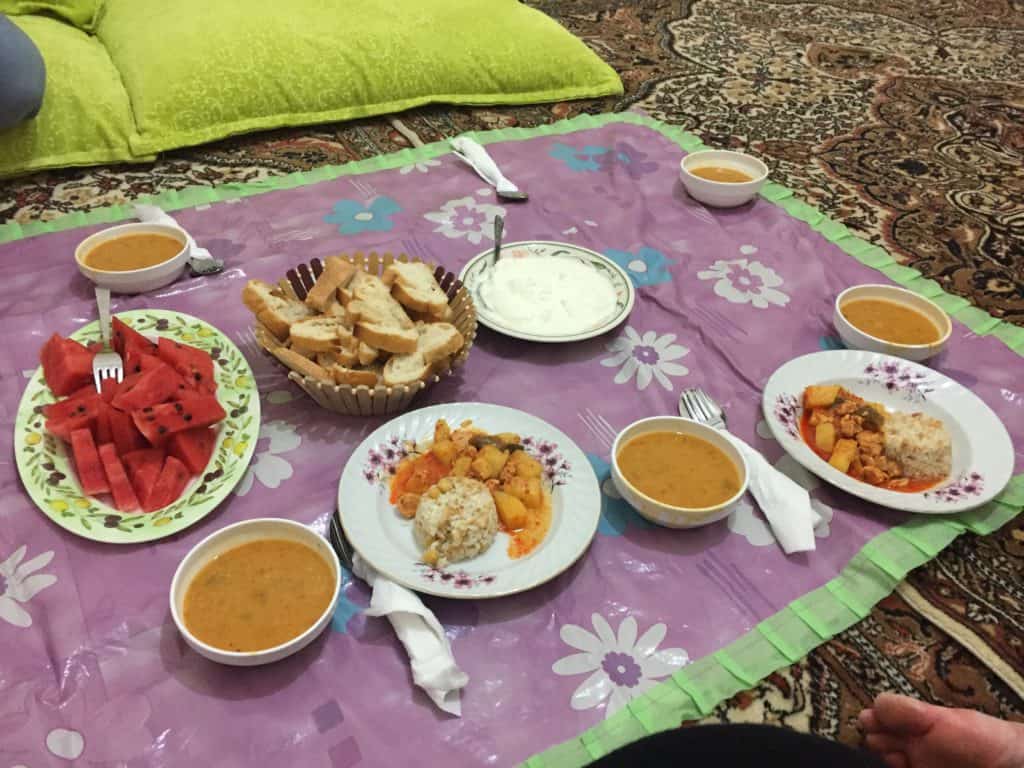 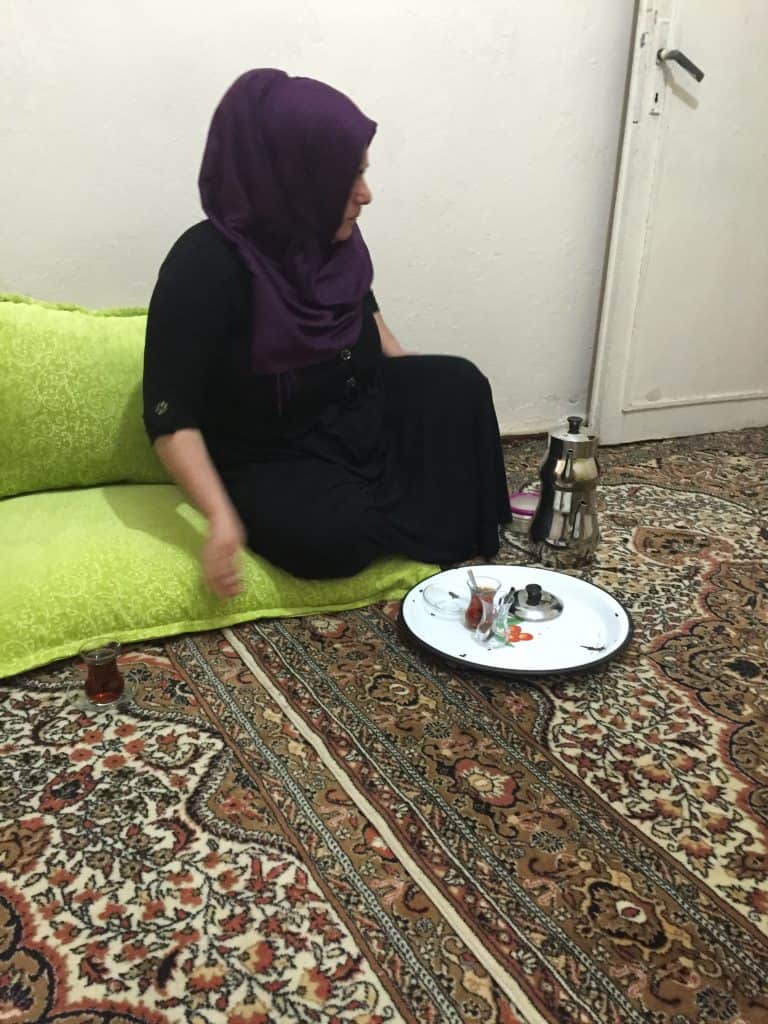 After dinner, Burek took us to a bar…but not how we think of a bar in English-speaking areas.  No alcohol is served here, but rather tea and shisha. 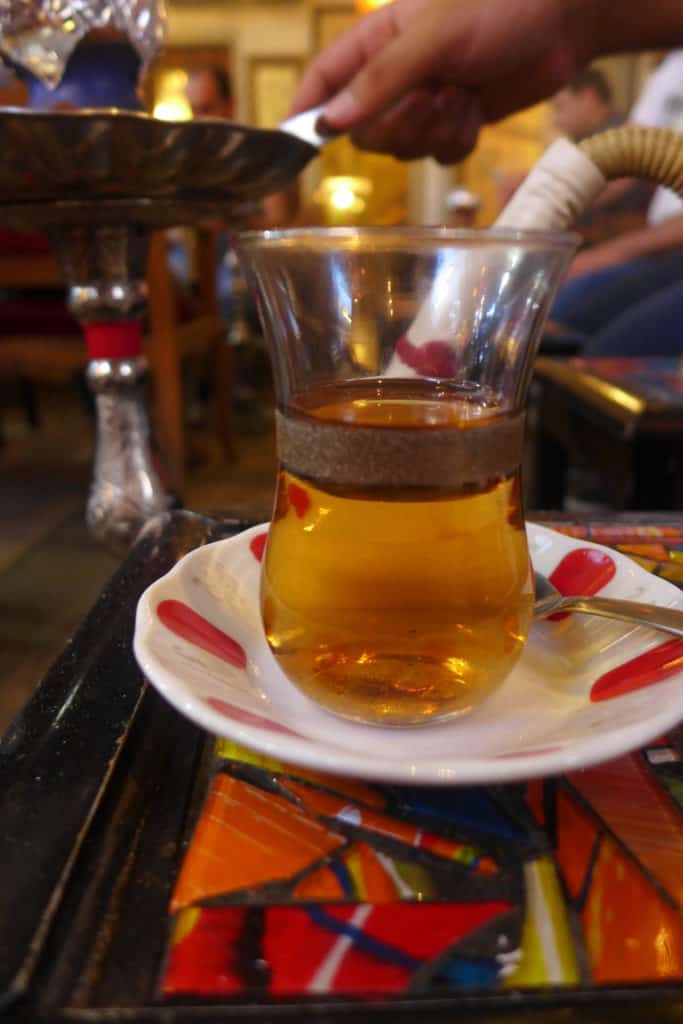 The bar we were in is over 300 years old, I believe it’s called Corlulu.  We found a seat and Burek ordered us apple tea (which I think is really almost like that powdered apple cider we’d drink sometimes when I was a kid, only tourists and kids drink it from what I’m told) and apple shisha. 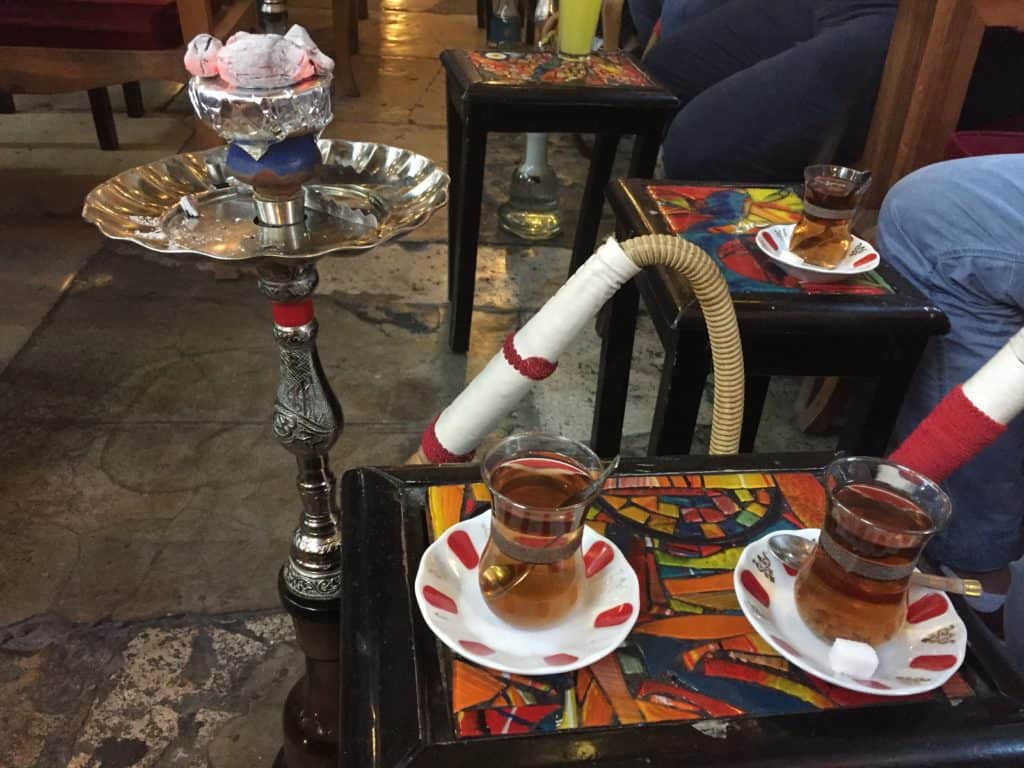 They bring out the nargile devices and put glowing hot coals on them, which heats the smoke and sends it through the water (that is my layman’s explanation).  It was crazy to me that there are all these open glowing hot coals all over the place in this crowded bar—when I got up to go to the bathroom, I pictured my (nylon) dress just spontaneously bursting into flames if I accidentally brushed up against one.

The bar itself is also really beautiful, I was sad that none of my pictures really did it justice.  The colored lanterns in particular are like glowing jewels…but I was trying to be kind of stealthy and not a creeper tourist, so a most of my pics came out blurry.

While shisha’s not for me, this was a really unique experience all around, and I’m glad I got to be there.

As we left the apartment, the call to prayer rang out around us in the twilight.  It was my first time experiencing it, and it really was interesting.  The way it echoes off the buildings is very pretty, particularly at sunset (an example video below from the next night, if you’re interested).

What a wonderful welcome we had to Istanbul and the culture of Turkey!

Want to have dinner with a local family in Istanbul?

Have you ever visited a local family as part of your travel?  I’d love to hear about it in the comments! 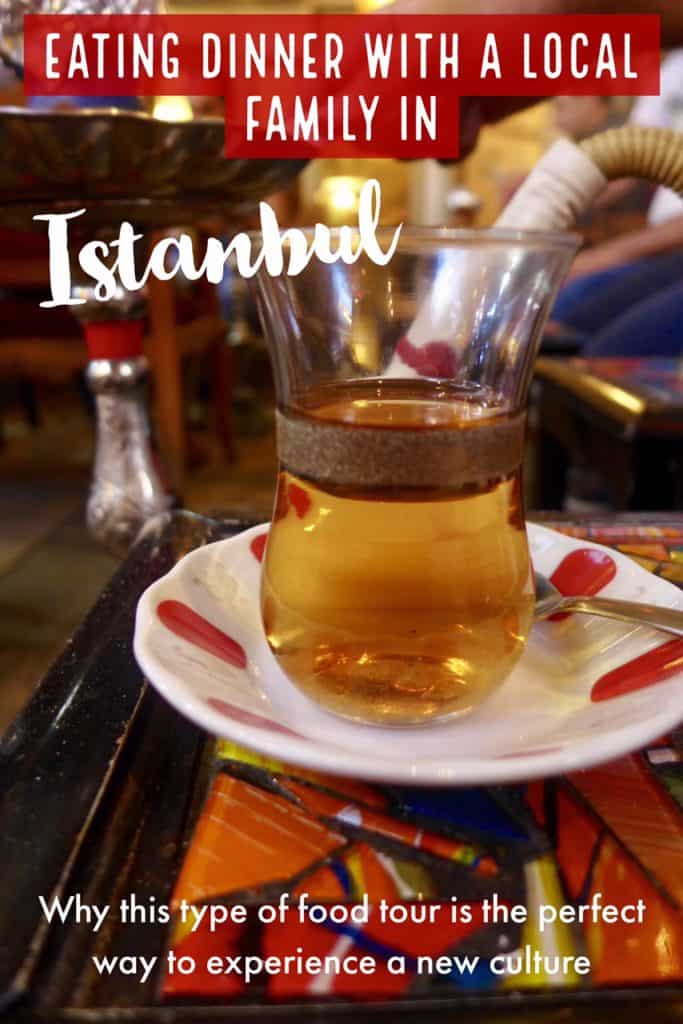 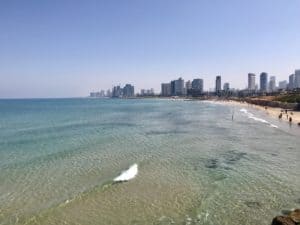 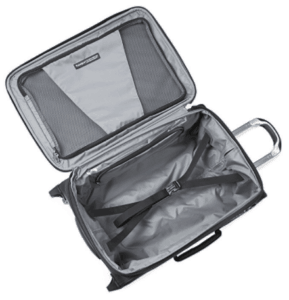 I’ve been digging through trip photos and sharin

It’s quite an interesting world we live in right

Turquoise waters, sand, and a little shade from a

A piña colada and this view...what’s not to lov

A little slice of paradise, perched on a cliff...I

There are two things you should know about tiny Co