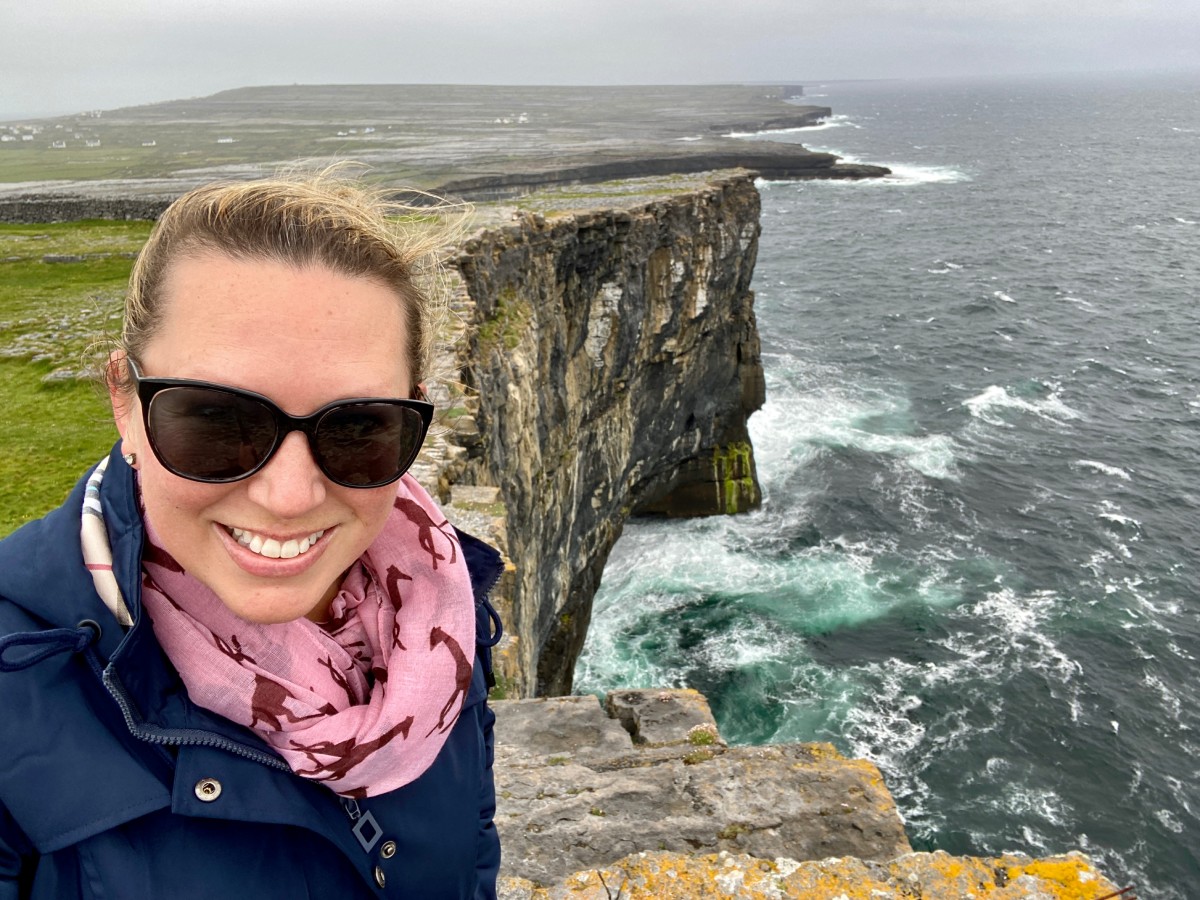 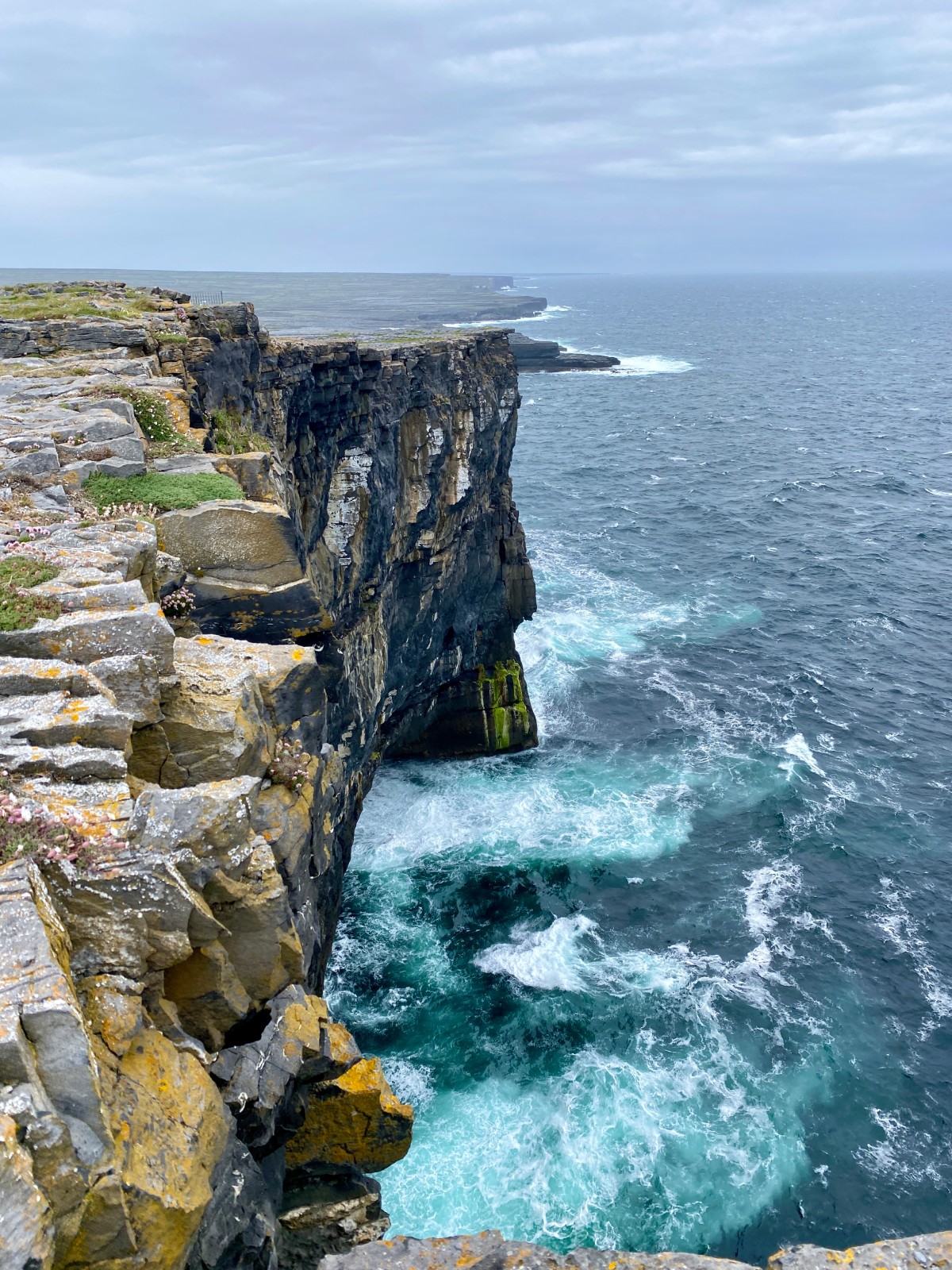 Perched perilously at the edge of sheer sea cliffs, Dún Aonghasa (also called Dun Aengus) is a magnificent prehistoric stone fort, believed by many to be the most impressive in Europe.  It’s certainly one of the biggest draws to the Aran Islands and boasts a more visceral sea cliff experience than the famous Cliffs of Moher.

What’s even cooler is that I had it entirely to myself.  This is a pocket of Ireland that doesn’t get nearly the amount of tourism as the mainland, and I visited just before the peak season started.

Where is Dun Aengus?  Dún Aonghasa is located on Inis Mor, the largest of Ireland’s Aran Islands, off the west coast near Galway.  “Largest” can be misleading, however, since Inis Mor (also called Inishmore) is still only about 14 square miles (about 7 miles by 2 miles) and has around 900 permanent residents.

How old is Dun Aengus?  It’s not known for sure, but the fort is believed to be more than 3,000 years old, with portions dating to the Bronze Age and Iron Age.  Estimates of the main structure date to around the 2nd century BCE, but the first construction that they’ve unearthed appear to be from around 1100 BCE.  So…it’s old.

Where to stay on Inis Mor:  There are limited accommodation options on the tiny, remote Aran Islands, so I recommend booking early.  I only booked my trip a few weeks ahead, and so ended up staying in the unique glamping pods near the beach (see TripAdvisor reviews, and you can book directly).  If there had been availability I’d have booked Kilmurvey House or Seacrest B&B. 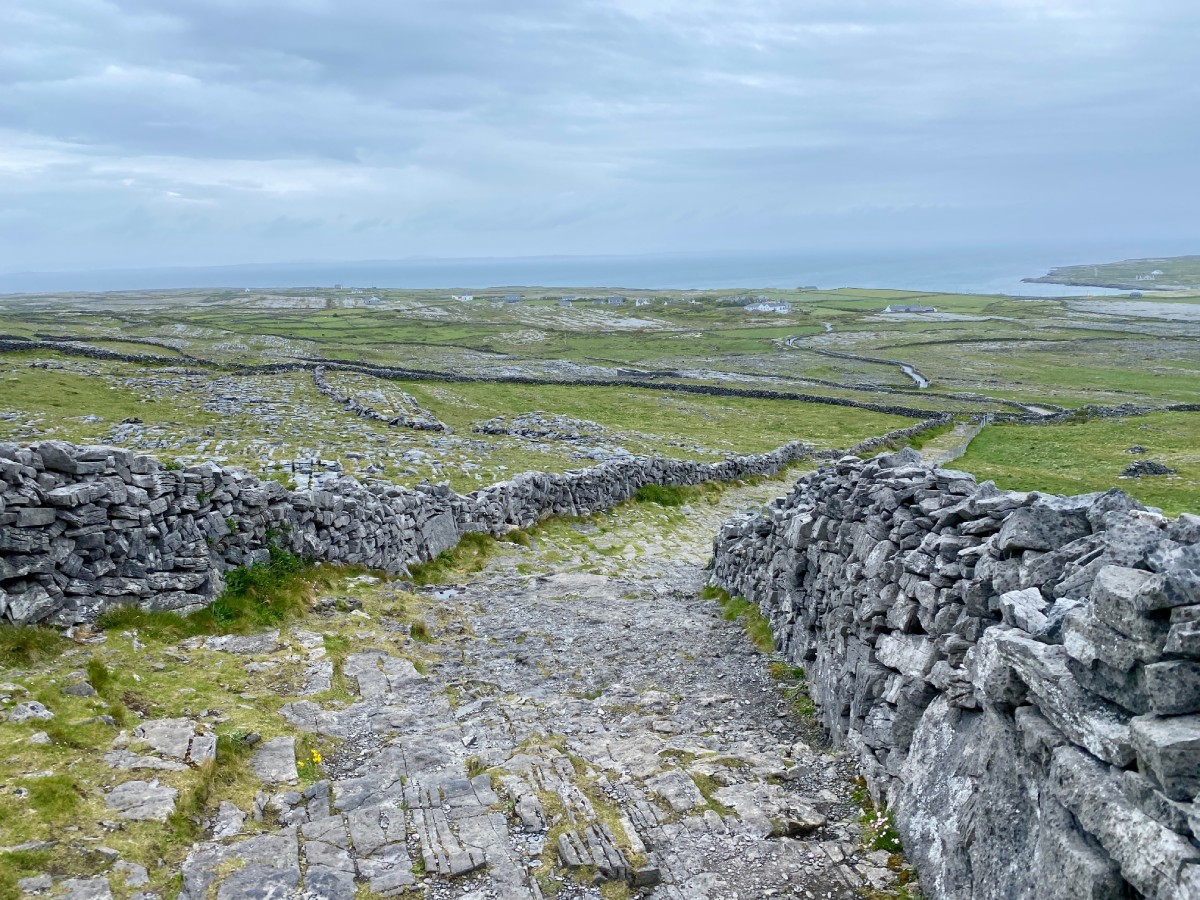 How do I get to Dún Aonghasa? (Dun Aengus)

The fort is about 6km from Kilronan, the main town in Inis Mor where the ferry comes in.  Many people bike to Dun Aengus, either with a regular bike or an electric bike (eBike).  As a bike hater, I strongly recommend the latter.  It will take from 25 to 60 minutes depending on your speed and how often you stop for photos.

Other options include taking a tour of the island with a taxi van (what I did, given limited time and bad weather) or a pony trap tour of the island.  If you have plenty of time and energy, you could walk there as well.  It’s not exactly a flat road, so expect some smaller hills up and down.  The ‘low road’ is the best route to cycle to avoid the worst hills.

Read more about how I spent 24 hours on Inis Mor! 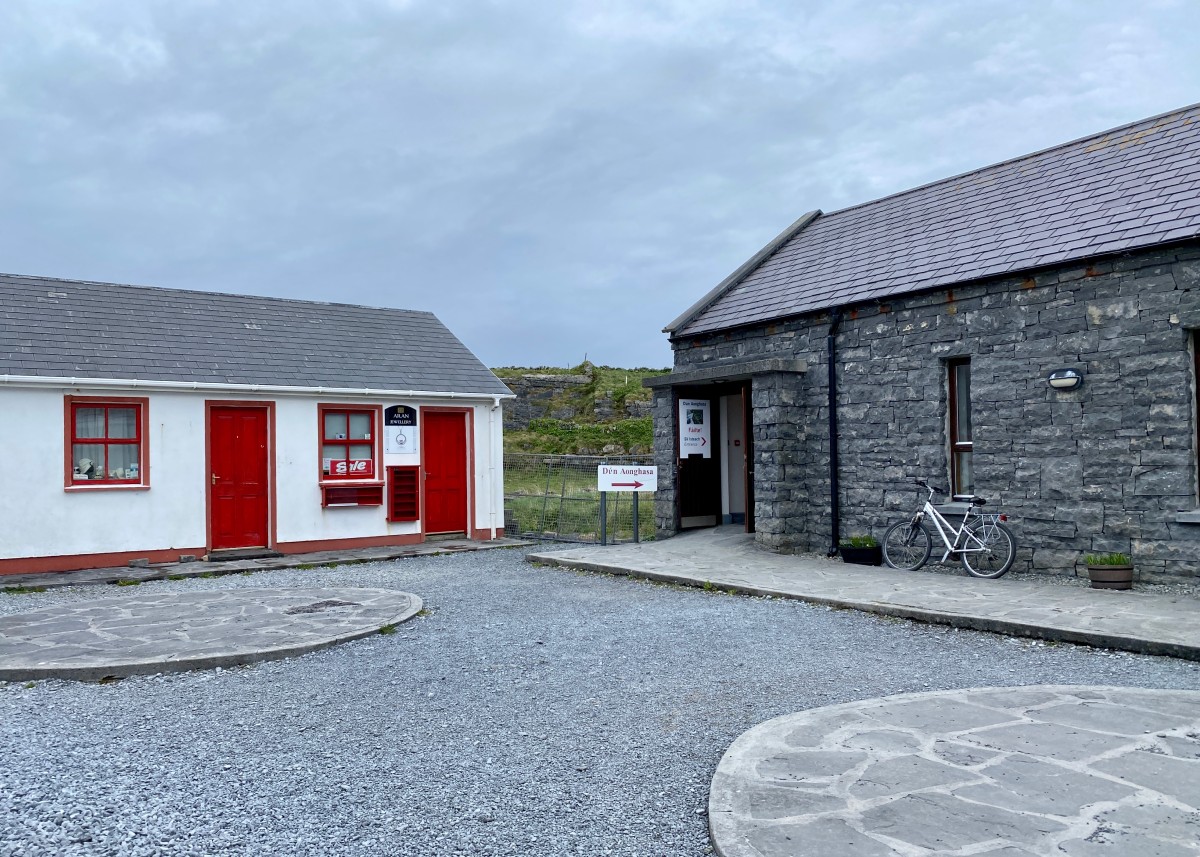 Touring both Guinness and Jameson in Dublin

The fort is open all year, but opening and closing times will vary based on time of year.  When I visited it closed a little earlier, and I showed up less than an hour before close.  So I had to hoof it up to the fort and back (though I was rushed so I could see other parts of the island anyway).

Once I showed the visitor center my voucher, they sent me on my way.  It’s about 1km up to the fort and will take you 15-20 minutes depending on how briskly you walk.  Parts of the path are gravel, but a lot of it is very uneven stone.  Make sure you wear study shoes with a good grip and watch your step.

What’s interesting here is in these photos (and on the walk) you can really see the unique topography of Inis Mor, which looks very different from much of Ireland—less lush and pastoral, more rocky and stark. 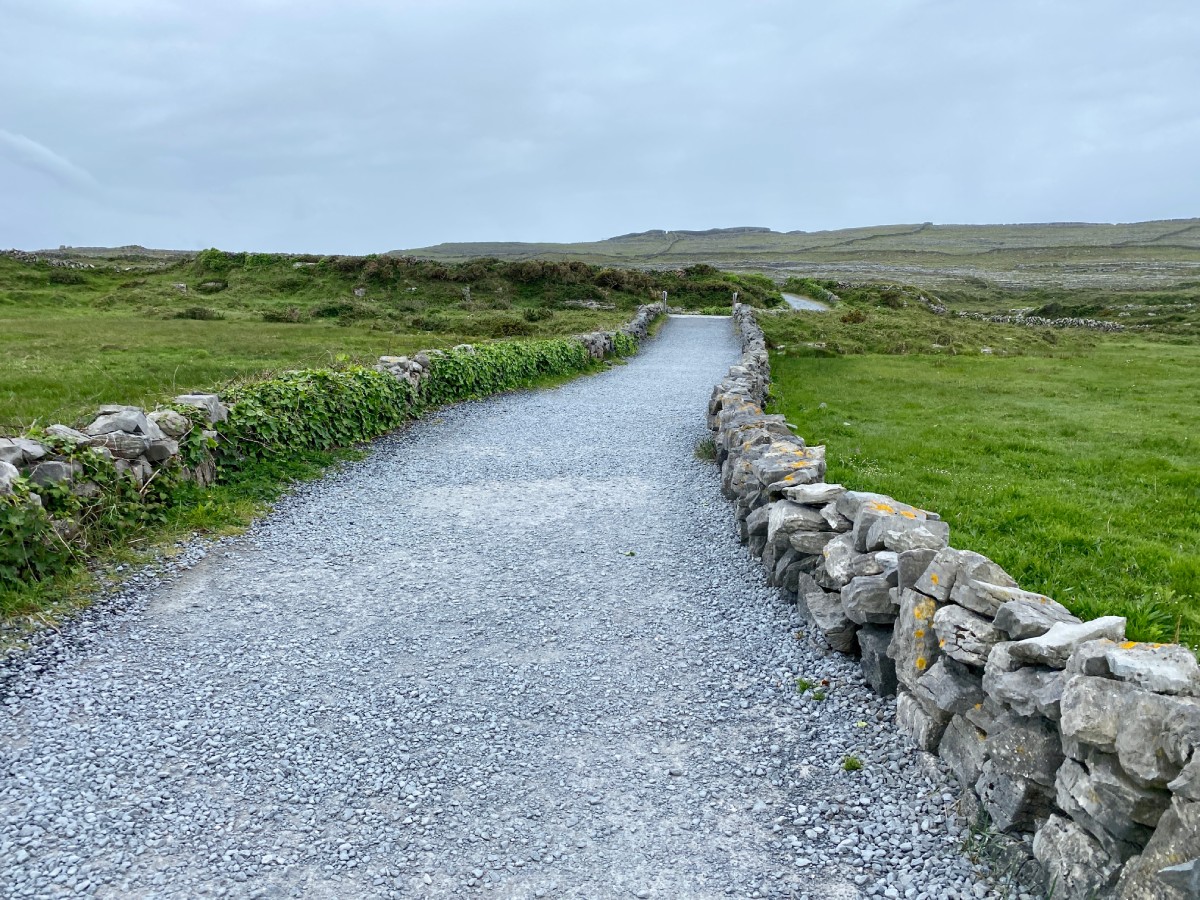 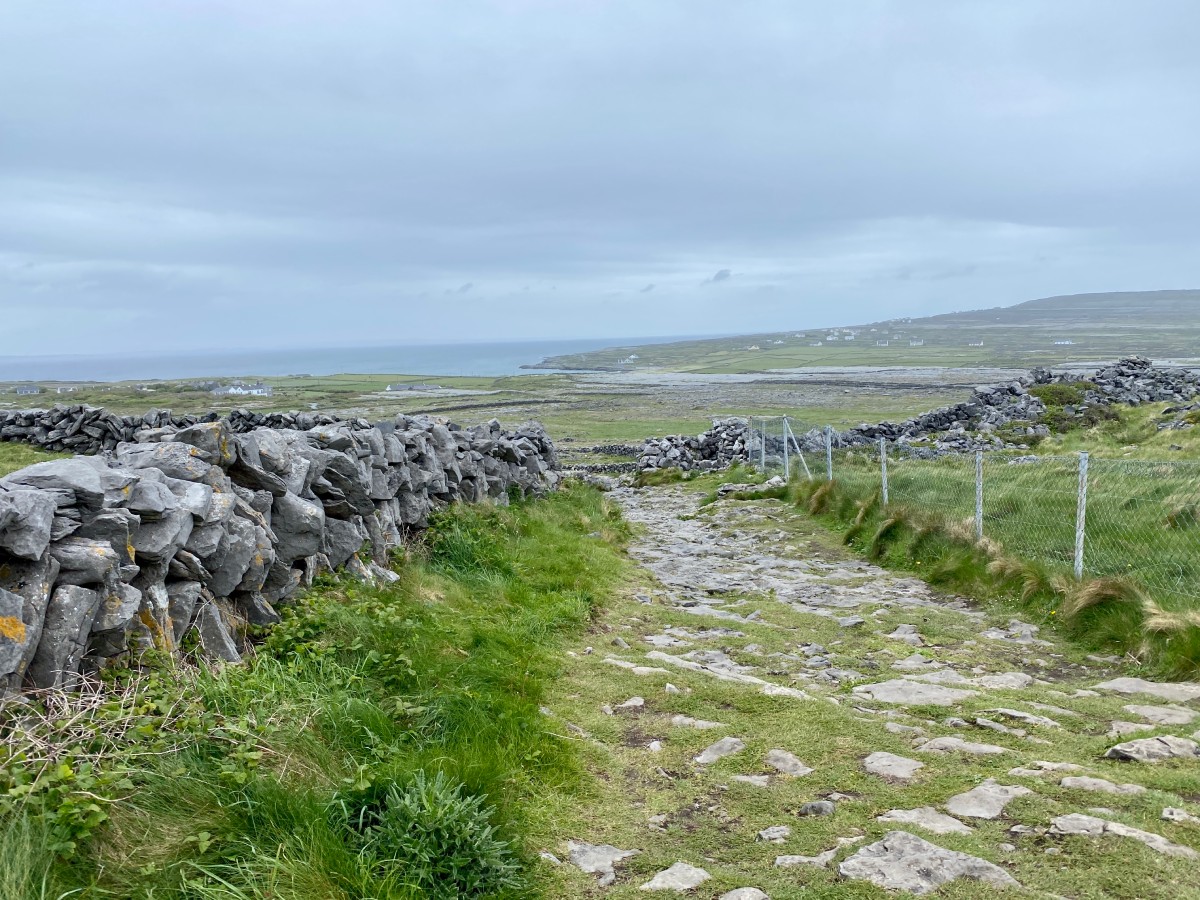 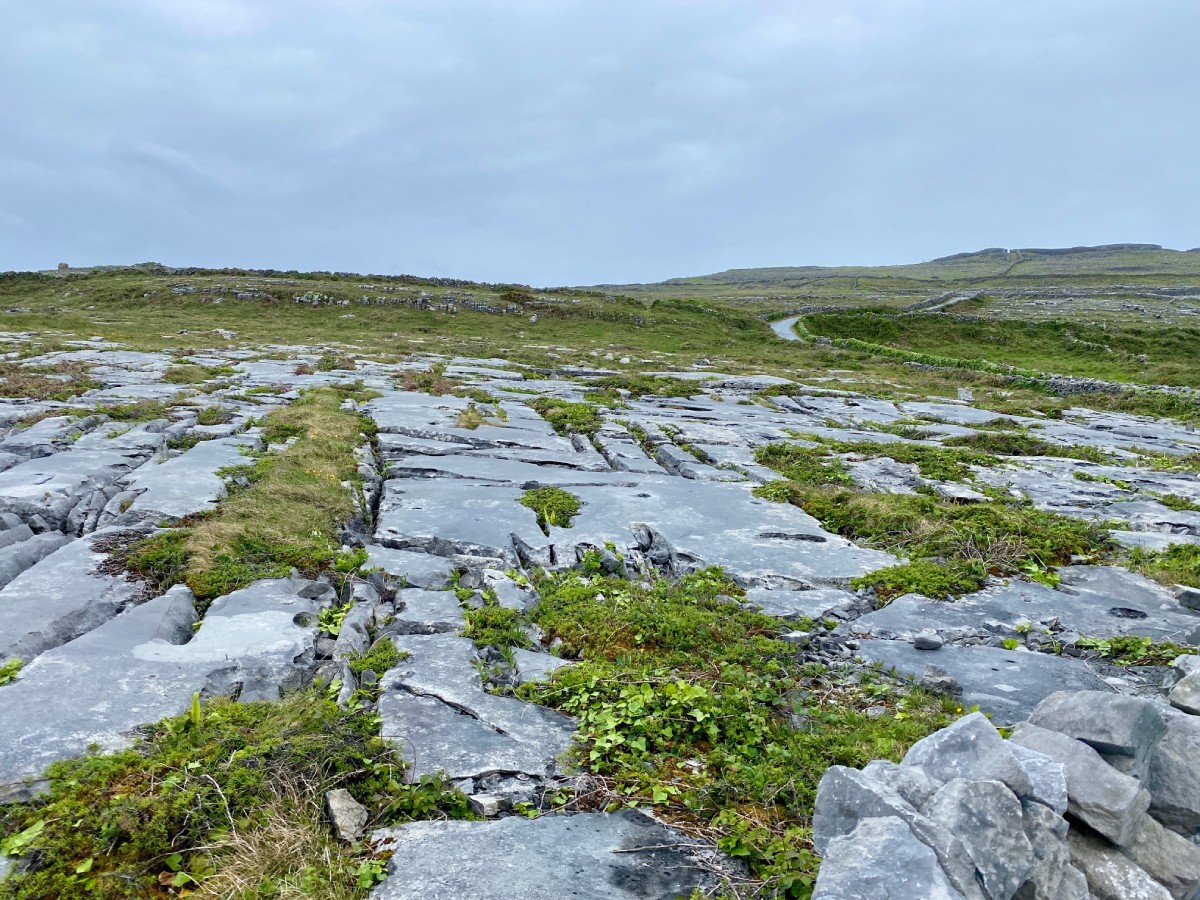 The first part of the walk is pretty flat, but then you take a fairly steep (but short) climb at the end, mostly stair-stepped.

It’s not a difficult walk unless you have mobility issues, but it would be easy to twist an ankle or stumble and gouge a knee…both things I have done while traveling in other countries.  I do not recommend it. 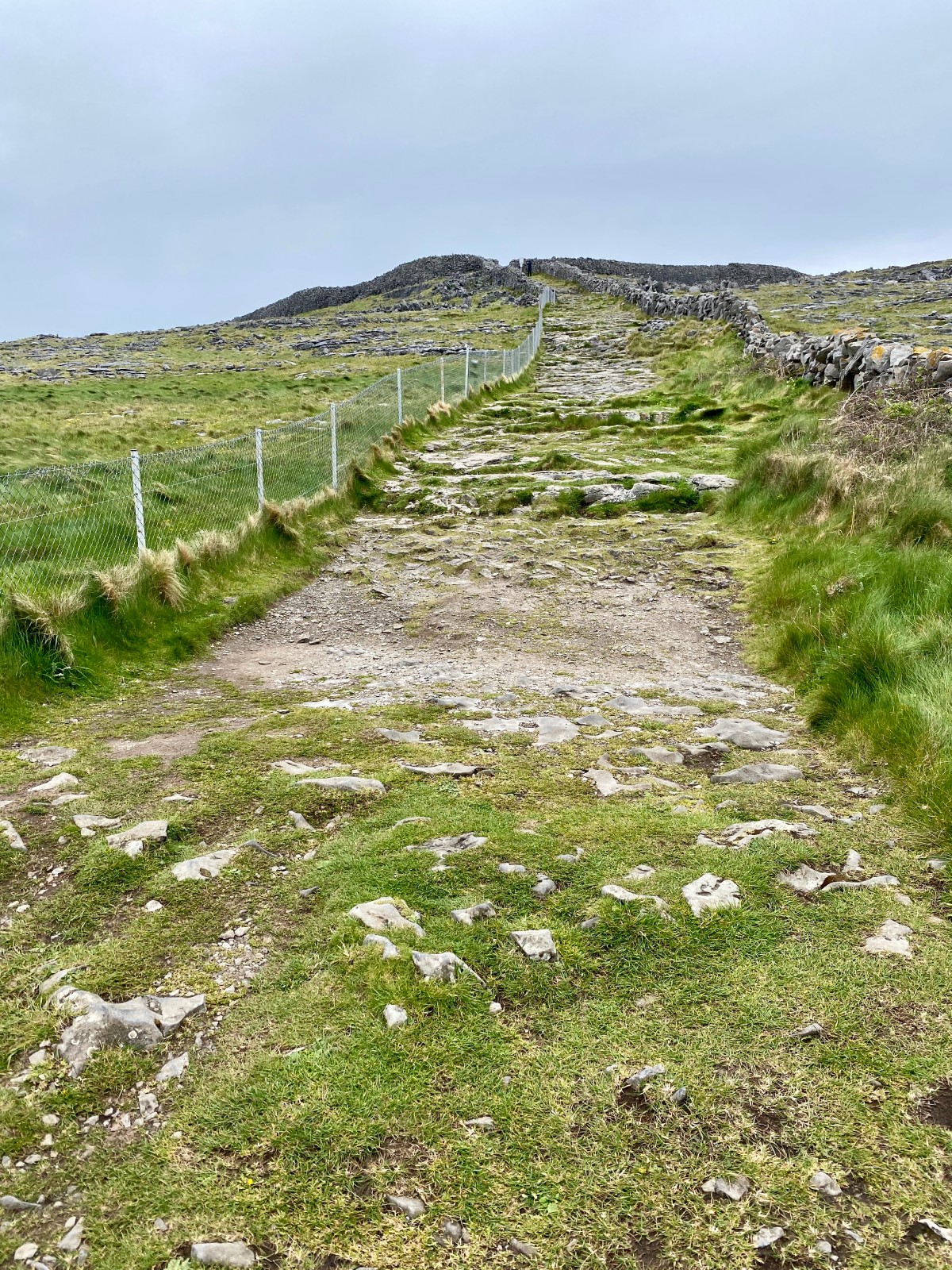 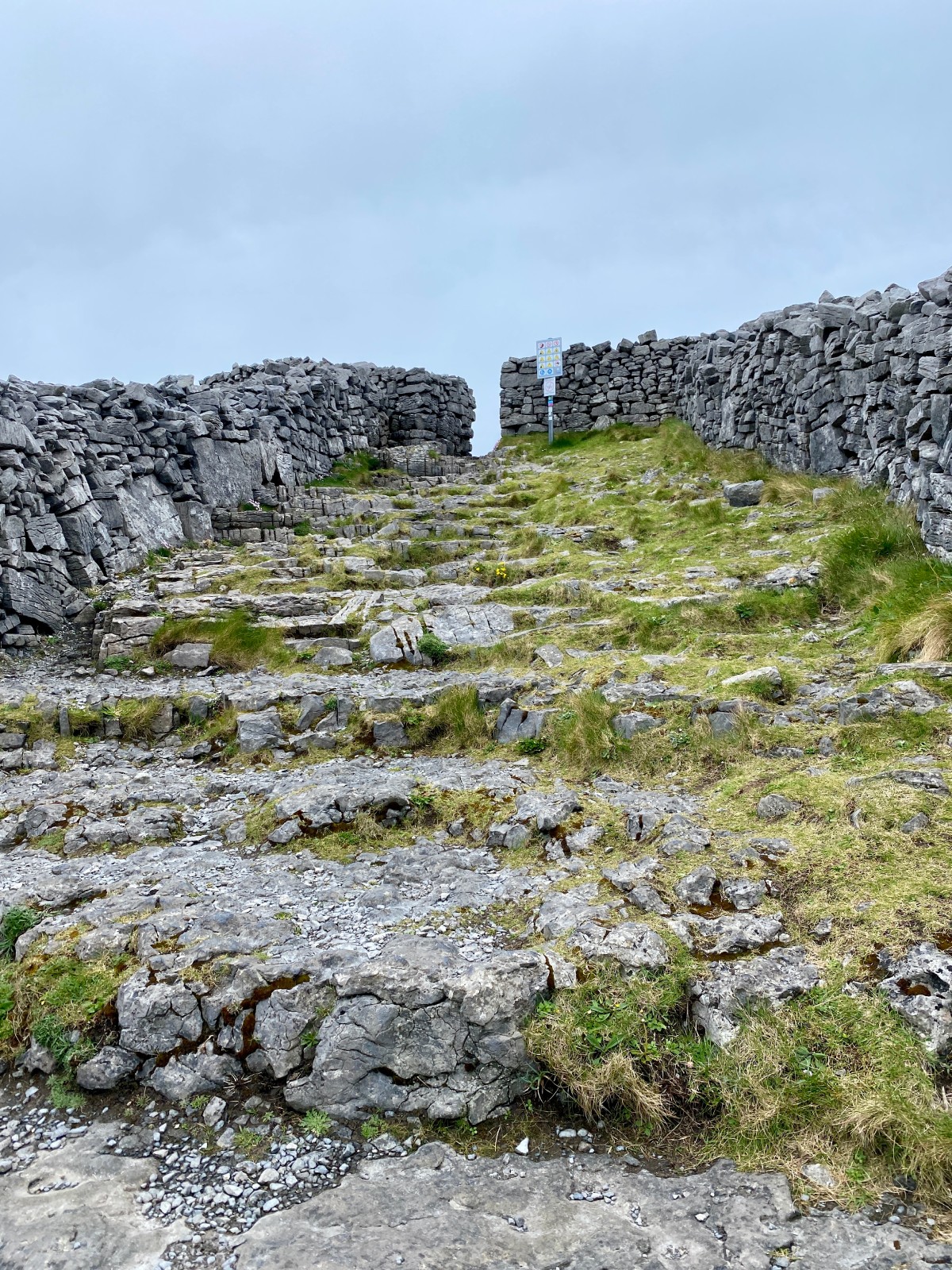 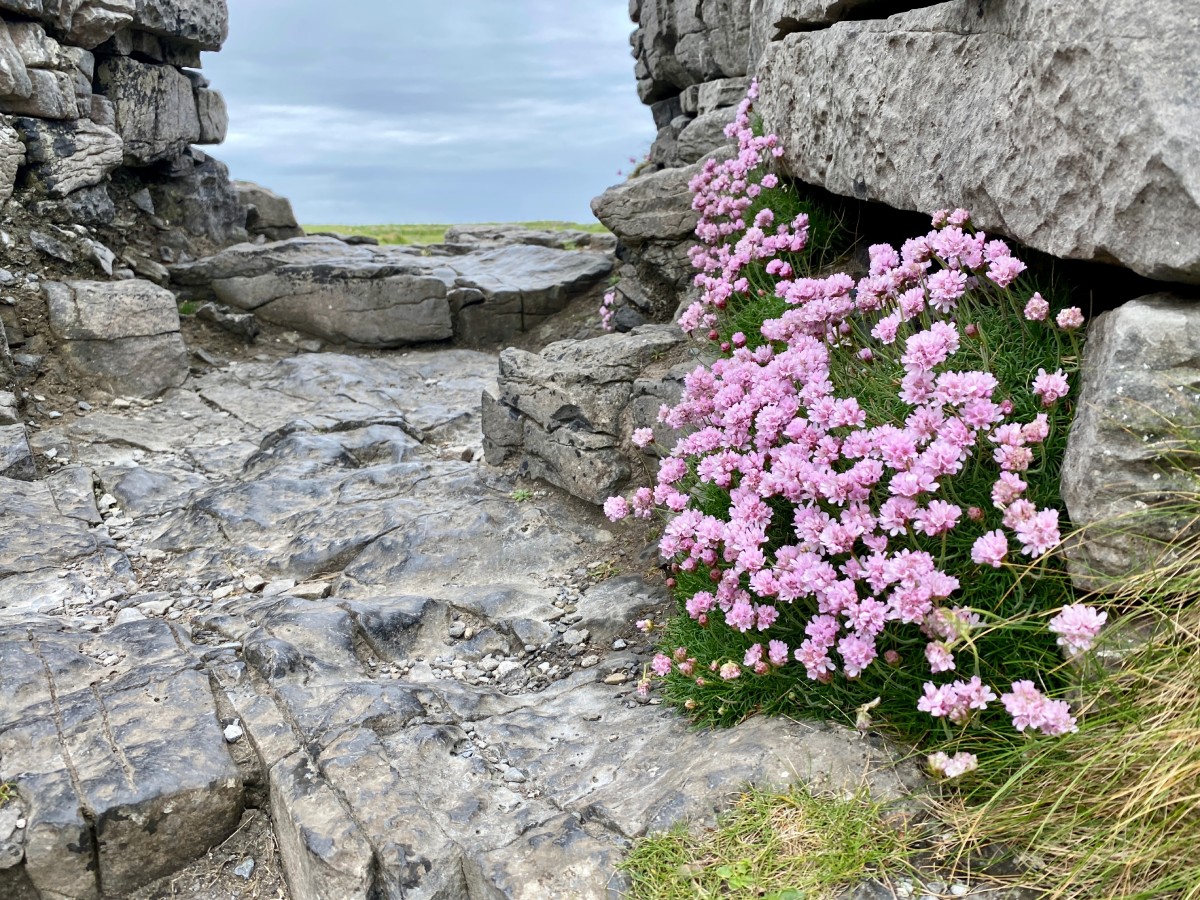 This gives you a good view of the fort on your final approach.  Dun Aengus is the largest prehistoric stone fort on the island, so tends to be the one everyone visits.  Later afternoons tend to have less crowds than the morning, as the day trippers will have taken the last ferries back.  I literally had the place to myself.

Once you duck inside the small doorway, there aren’t really signs or anything there that give you deeper understanding of the site’s history.  But you can read up ahead of time, or listen to this audioguide while you visit. 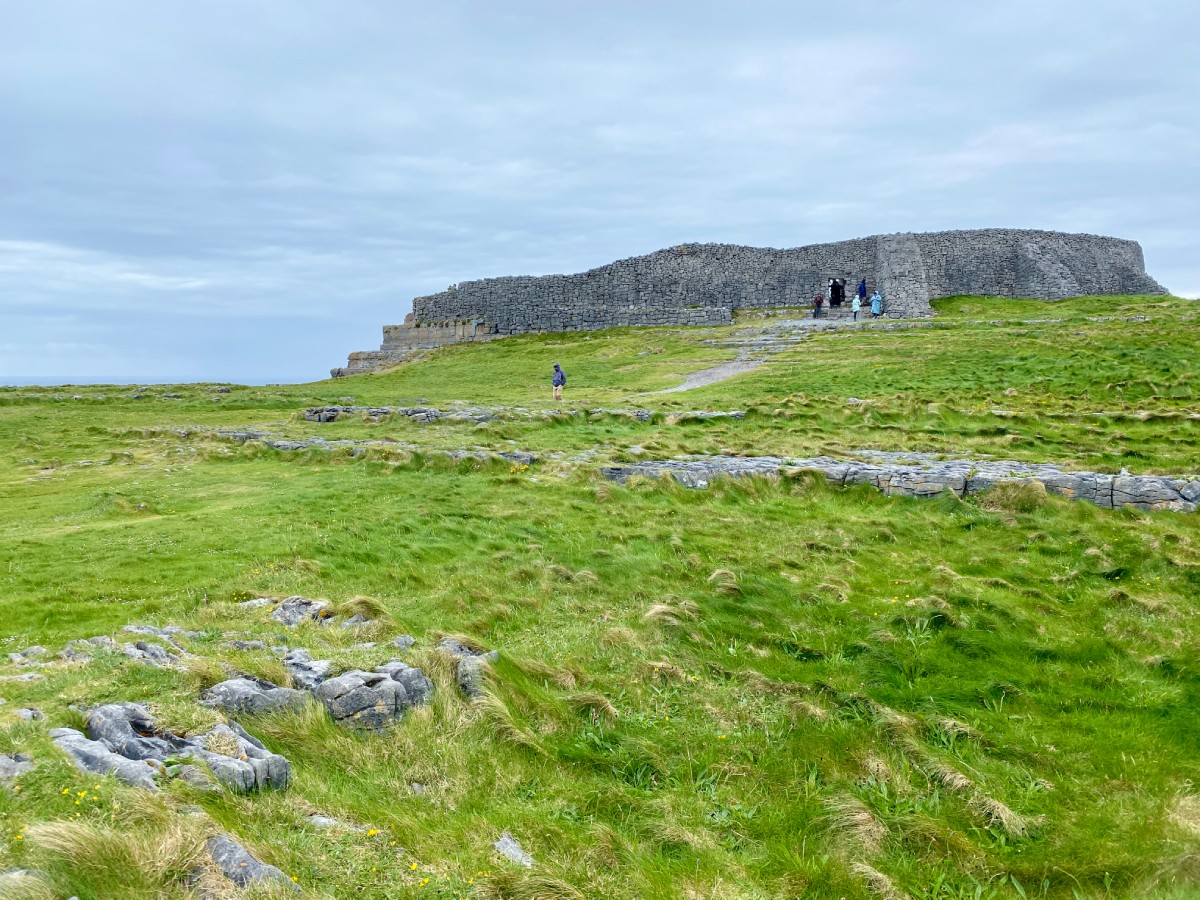 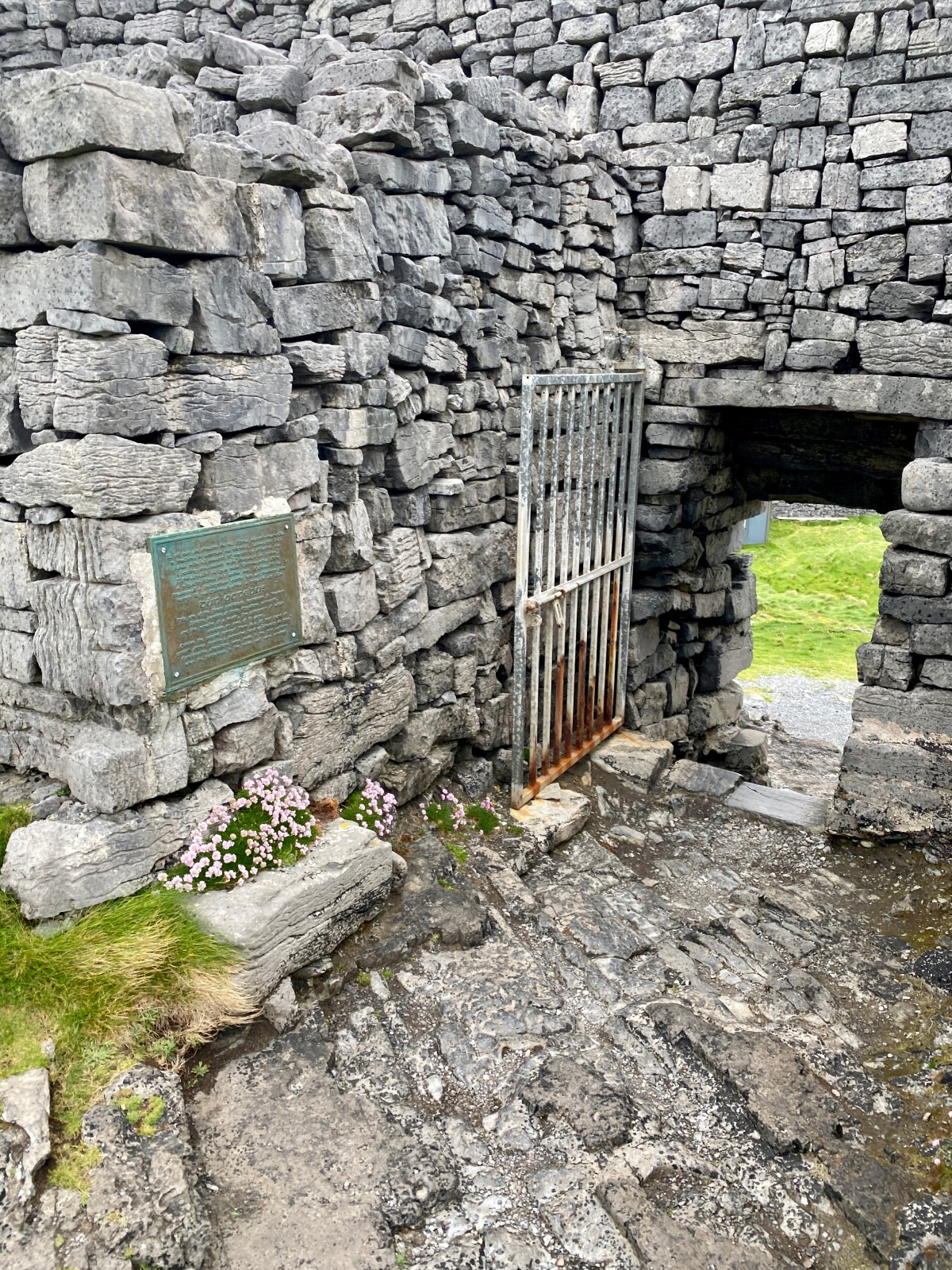 The fort’s name Dún Aonghasa simply means “Fort of Aonghas”, which is thought to refer to the pre-Christian god of the same name described in Irish mythology OR the mythical king, Aonghus mac Úmhór.  Because of this, the fort’s construction has been traditionally associated with the Fir Bolg, a mythological race (translated literally “men of bags”, HA!) who settled in Ireland.

As you can see, there’s a lot of “rumored”, “thought to be”, and other legend-based history to Dun Aengus, but very little that’s truly known.

What IS known is that the fort consists of three irregular semicircles (each a line of defense) and four defensive walls that form semi-circular bulwarks.  This article gives you a good overhead view of the fort. 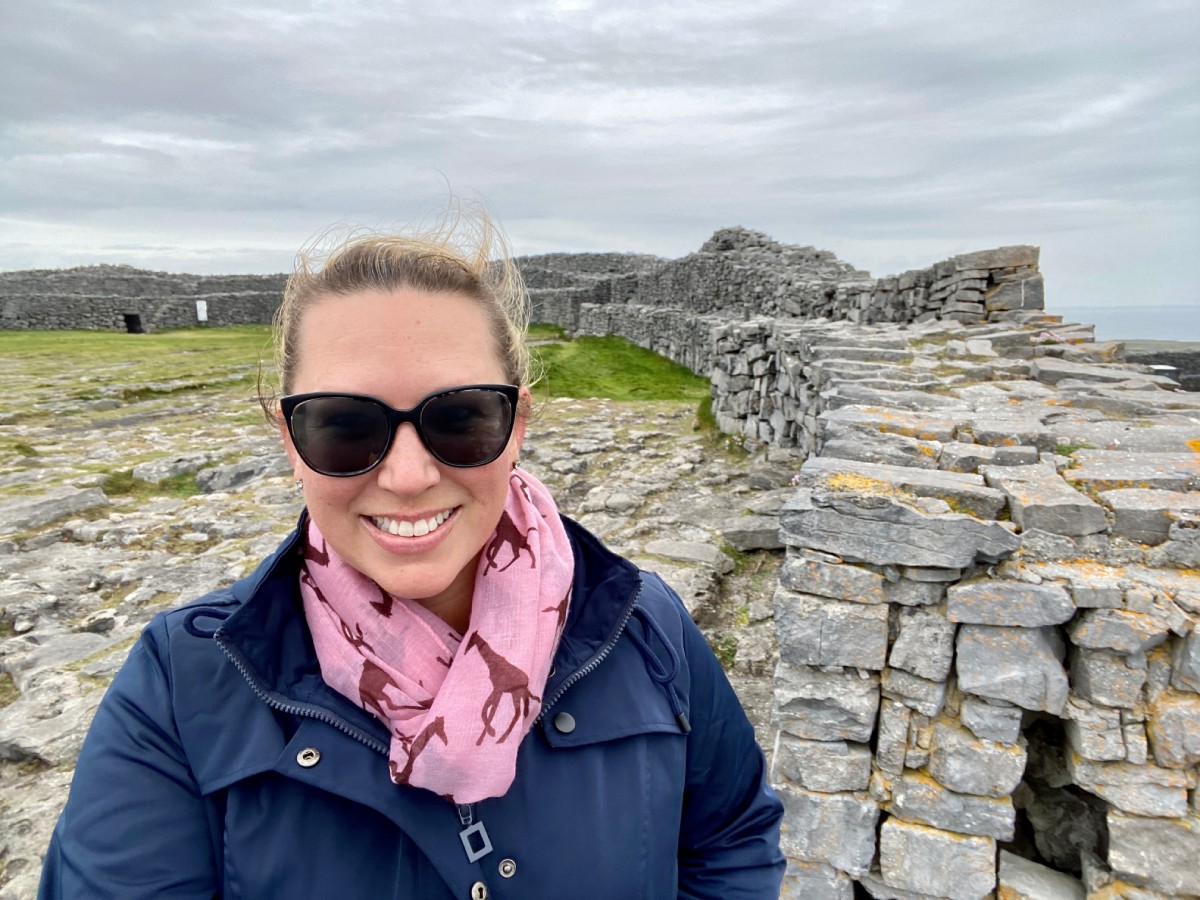 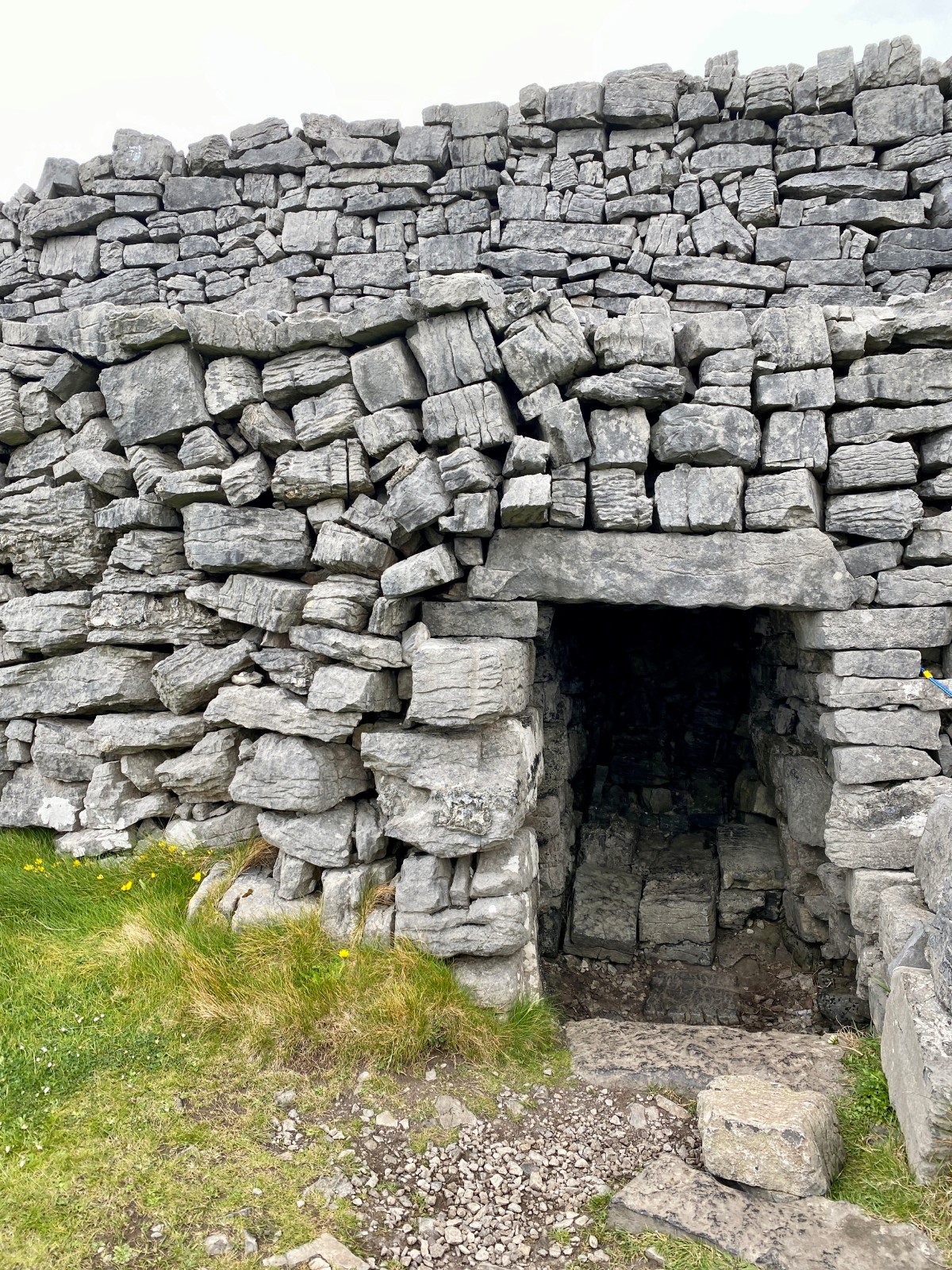 Dún Aonghasa is set right on the edge of a 330-foot-high sheer vertical cliff, and offers amazing views of the ocean and cliffs out to either side.

And it is WINDY.  This pic shows how crazy the wind was.  I was having to walk at a 45-degree angle at times to combat the wind as I climbed up the hill.  Be super careful on the cliffs, it would only take one gust to take you over the edge. 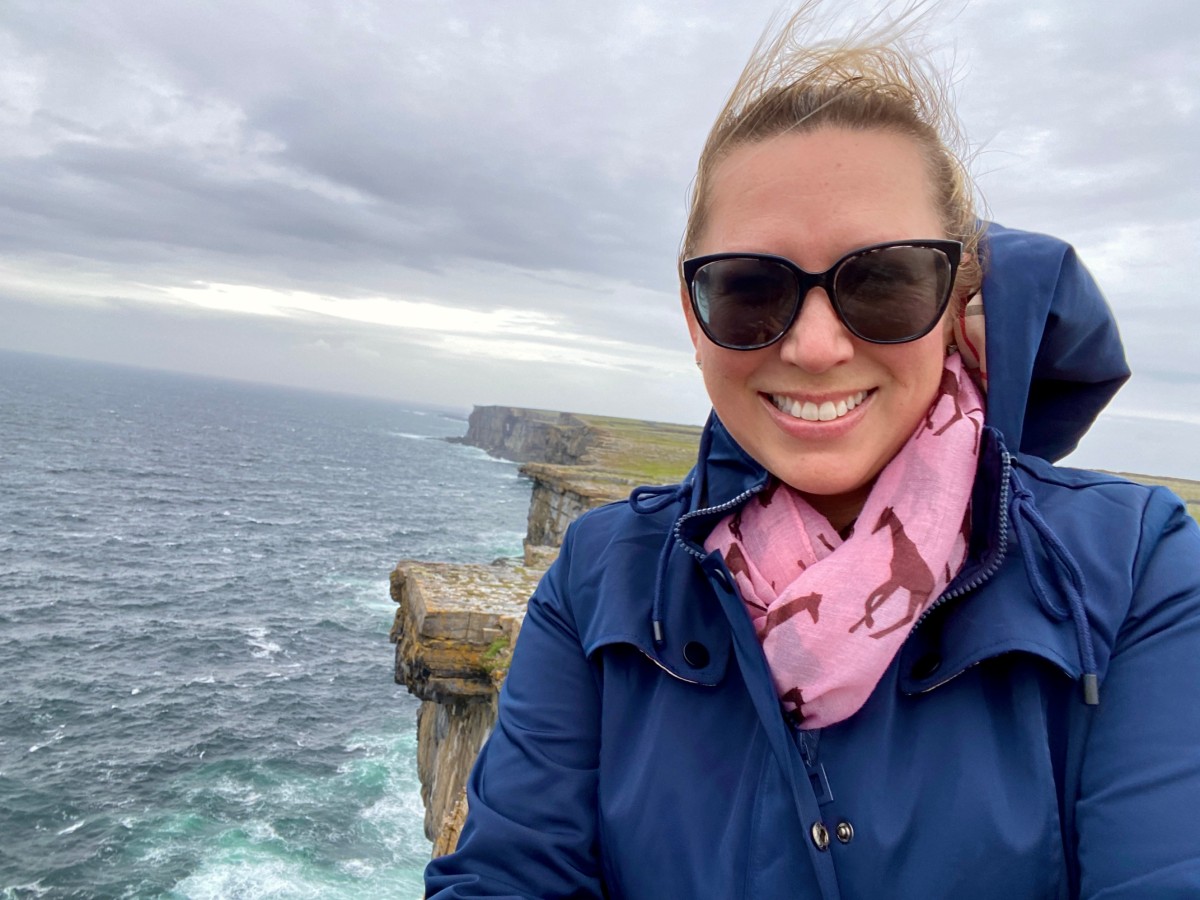 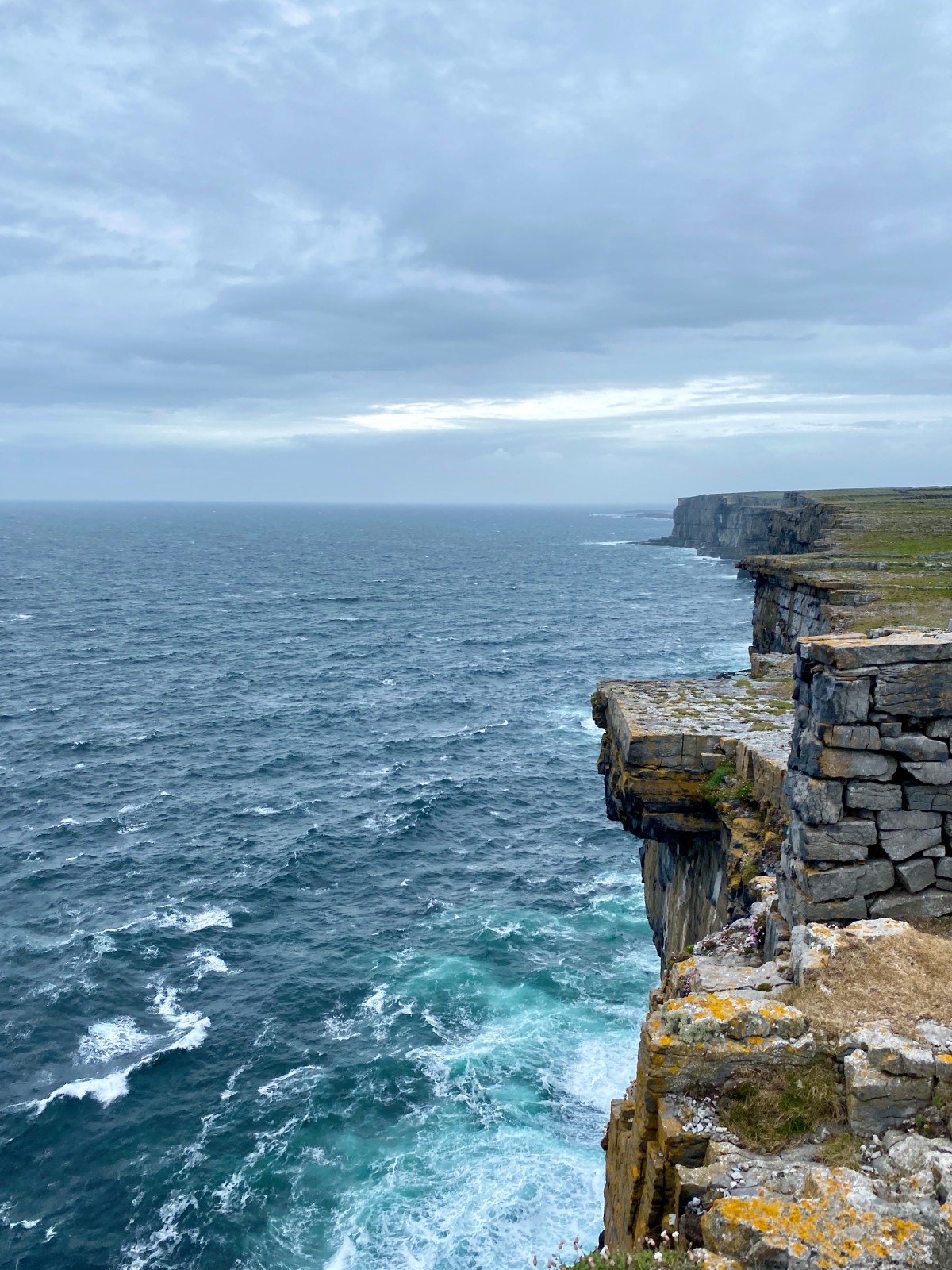 Despite how much I love history—and this site totally delivers on it—I kind of feel a little like “yada yada ancient history and architecture cool cool…”.

Because for me the stunning vertical sea cliffs were HANDS DOWN my favorite part of visiting Dún Aonghasa. 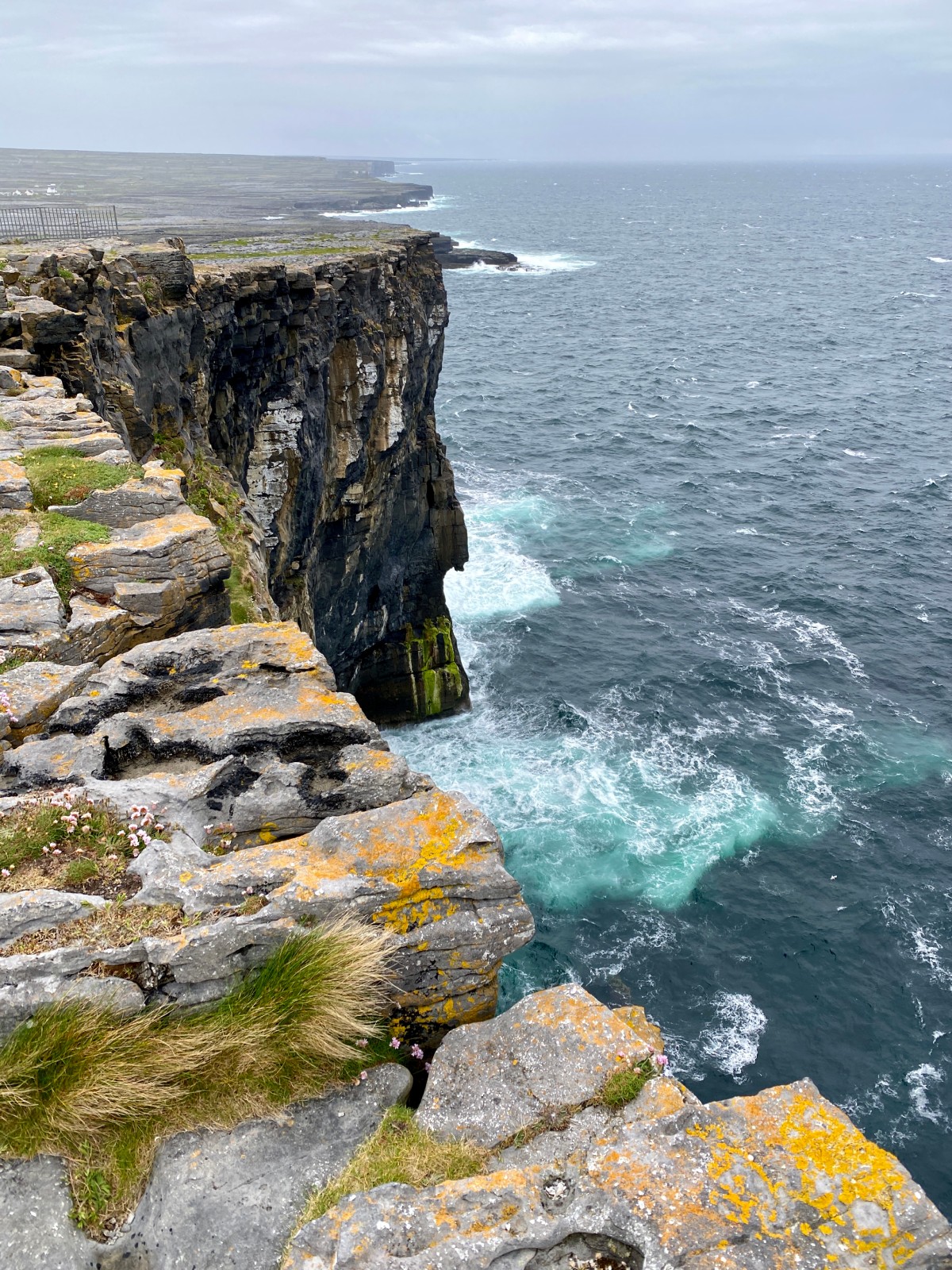 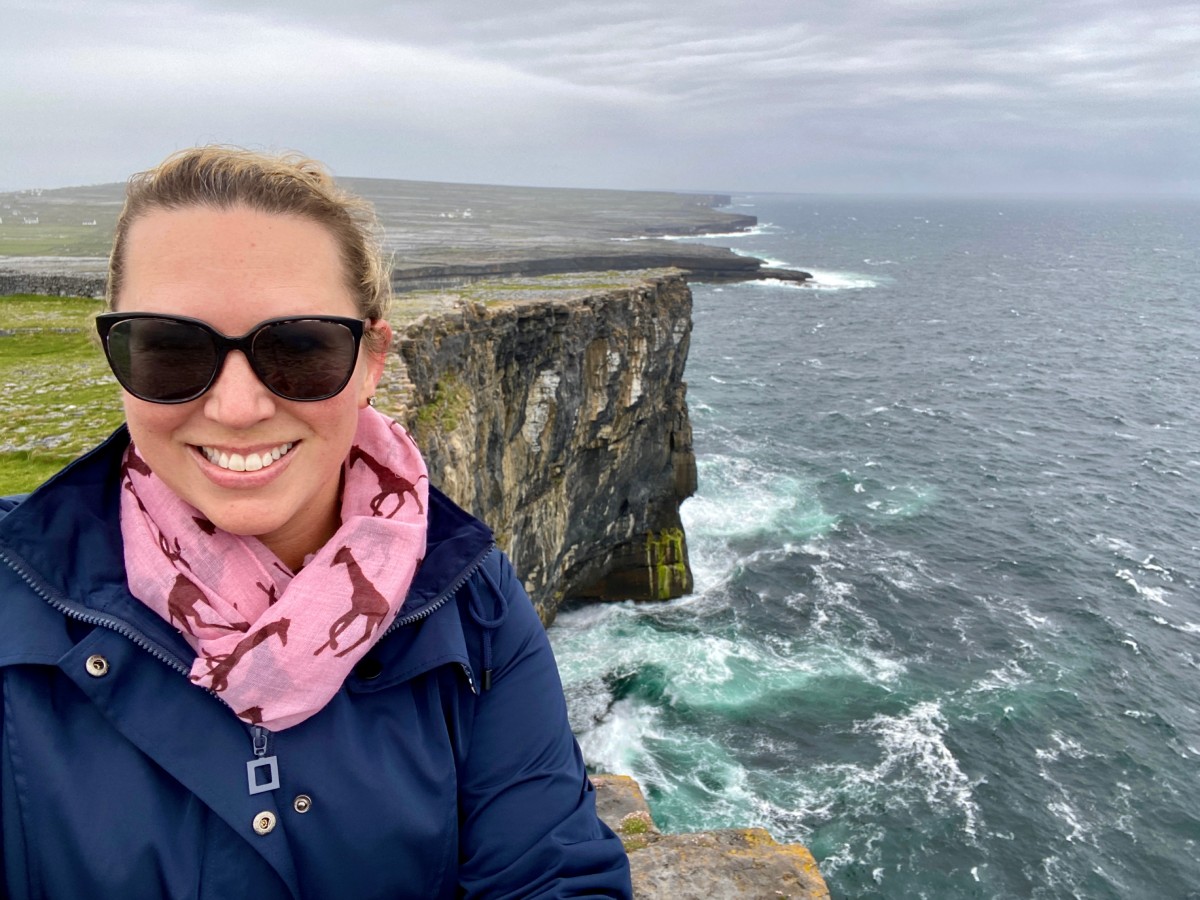 There is something so intense and primal about being that close to the cliffs, with their contrasting colors and craggy face, and deep green-y teal and white-capped waves churning and crashing at the base.  Give me this over the sanitized Cliffs of Moher experience any day.

But again, you need to be careful!  I will sometimes take some risks to get a good pic, but I was cautious about where I placed my feet, always conscious of where I was in relation to the edge.  If you have vertigo issues, poor balance, or fear of heights, this isn’t for you.

A good selfie stick or selfie stick/tripod combo can be your best friend for this, since the distance and height it creates lets you capture the full cliff view without getting *too* close to the edge.  I don’t like using selfie sticks much, but this is a perfect example of when they’re useful. 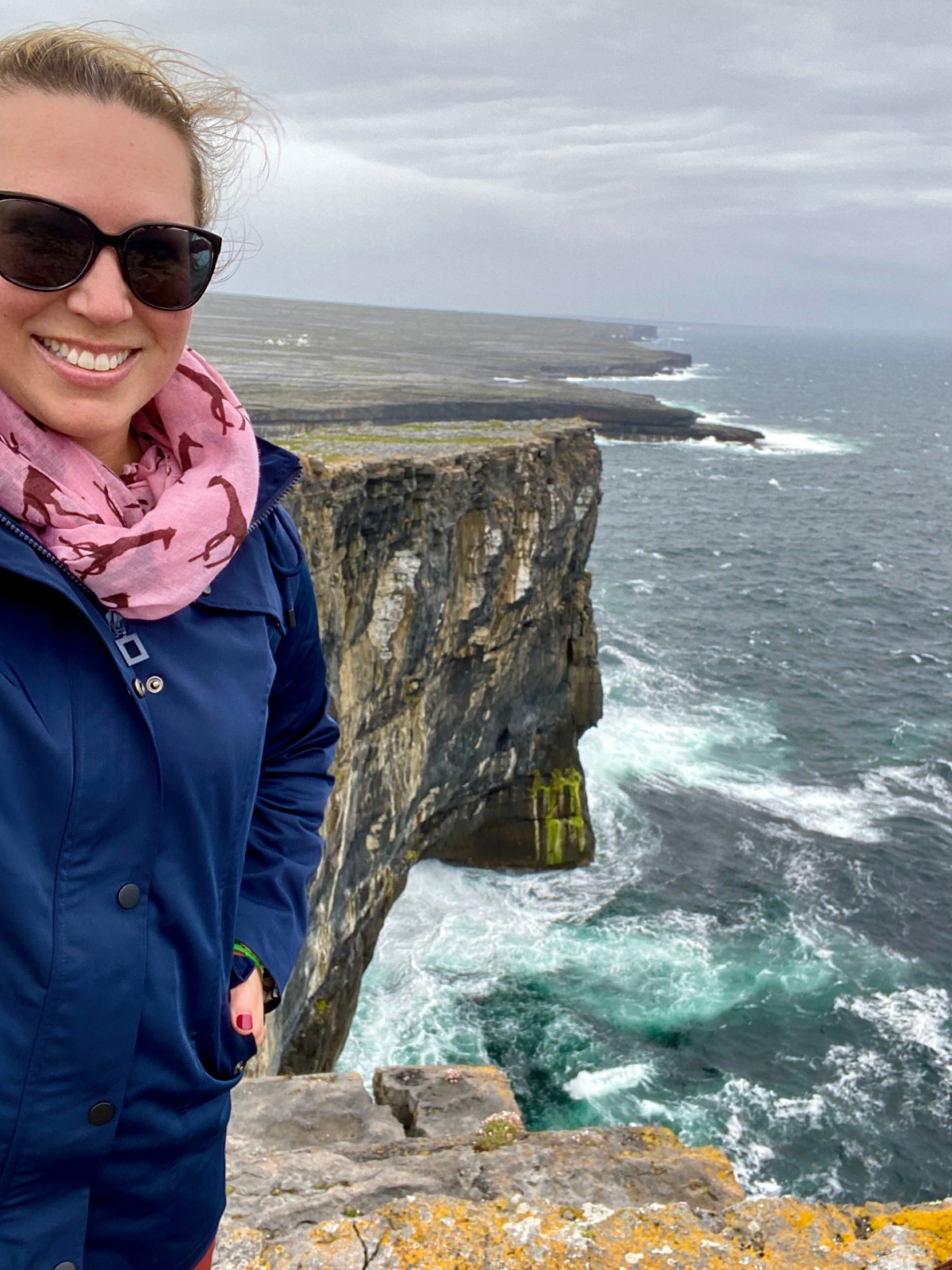 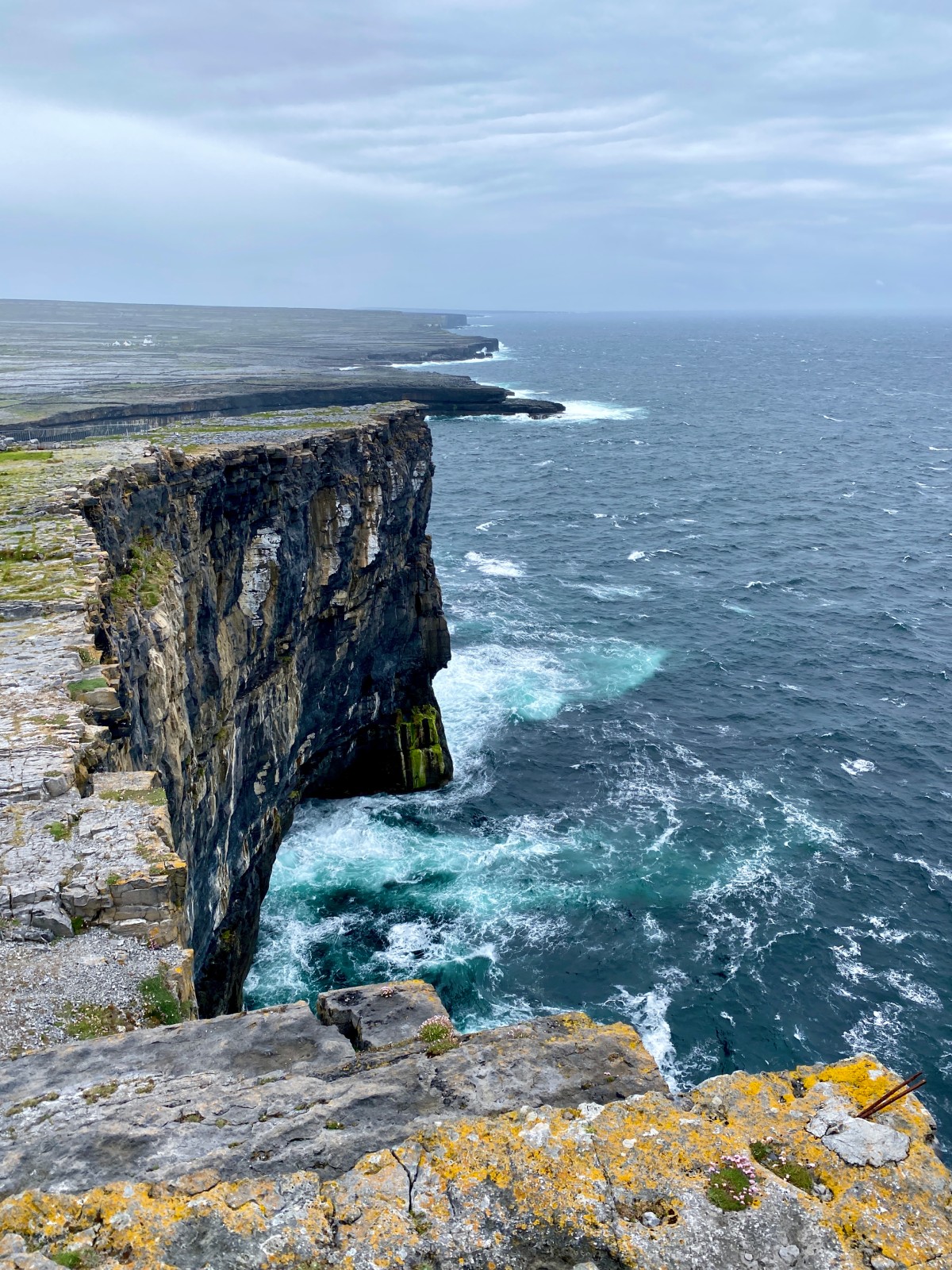 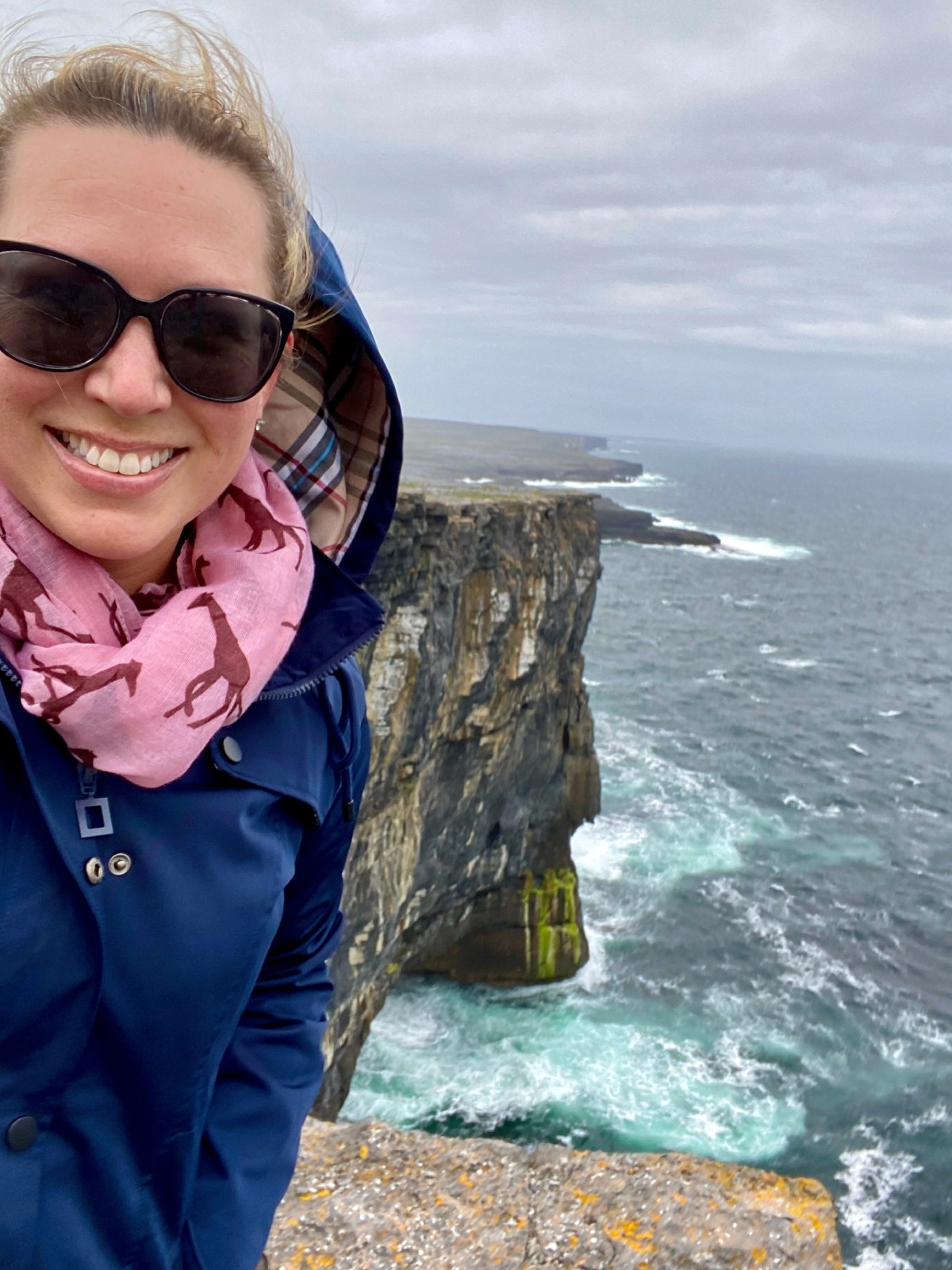 Even though my visit was pretty quick, I am so glad I took the time to visit Dun Aengus!  Most people will spend about an hour here, including the 15-20 minute walk both ways.  If you’re looking for a more unique side of Ireland, look no further than the Aran Islands! 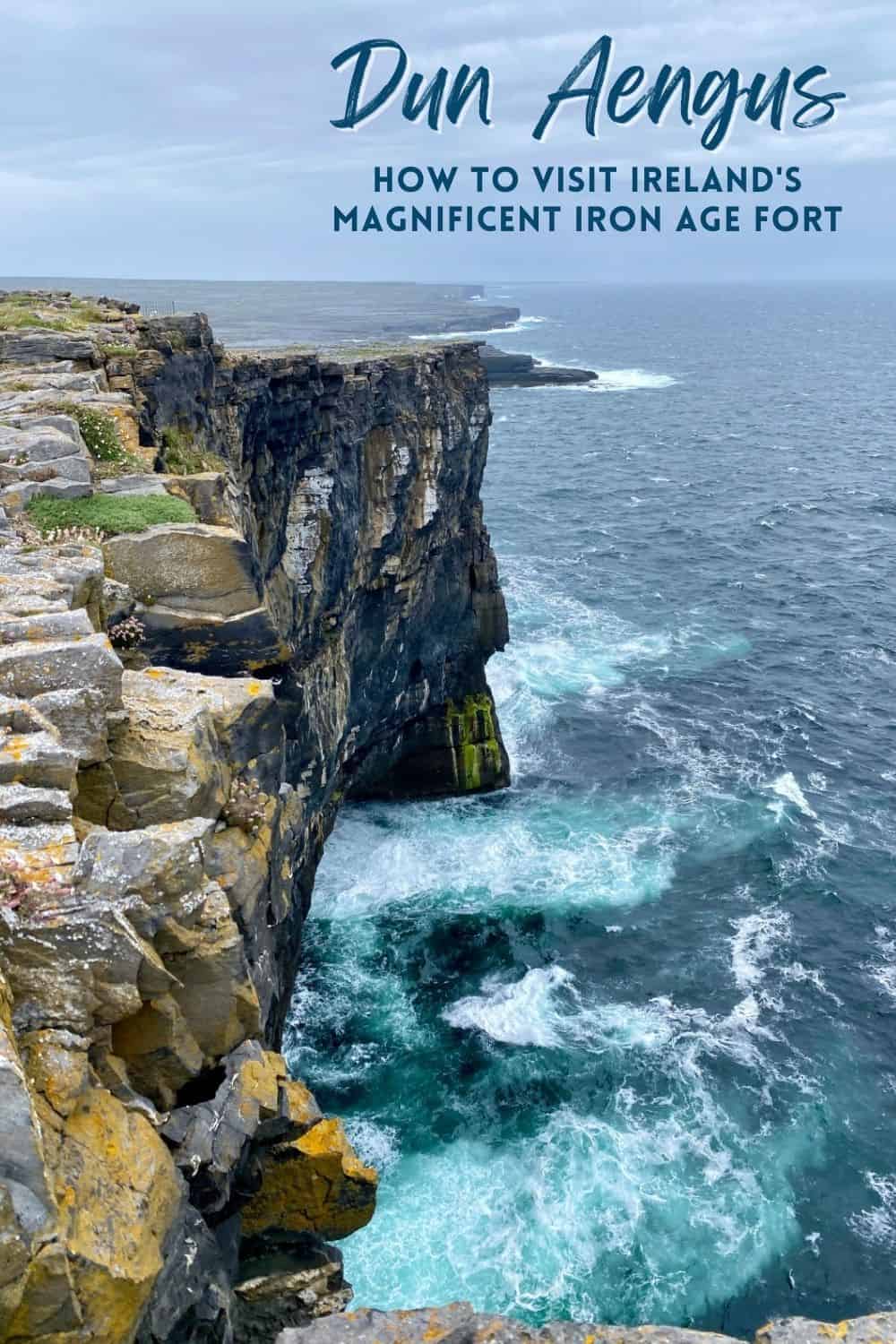 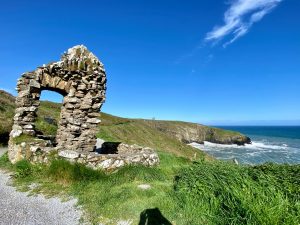 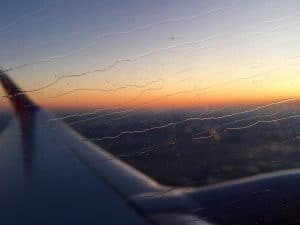 15+ Of The Best Tips For Avoiding (& Surviving) Air Travel Woes