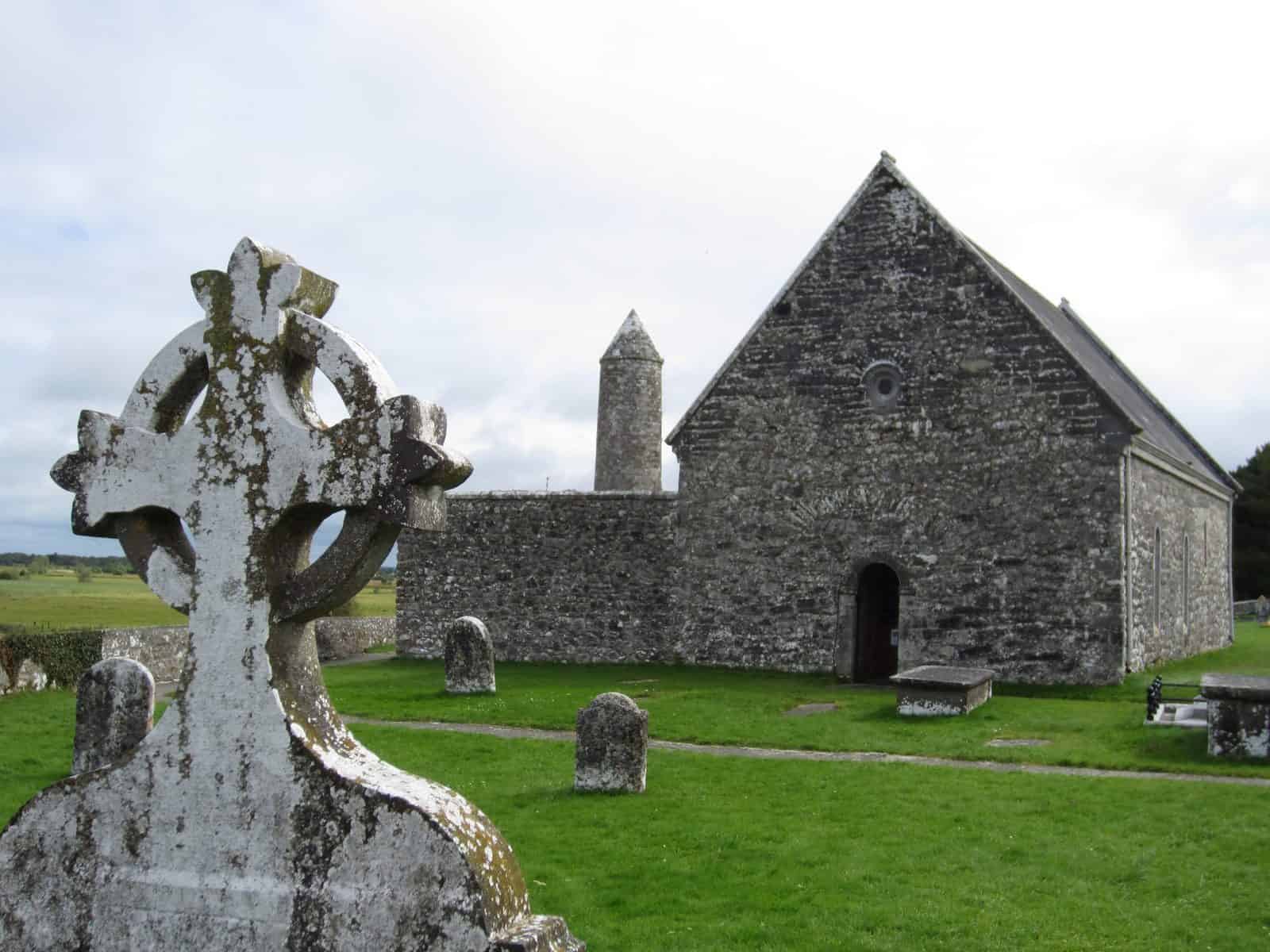 I’m finally rounding out all the little nooks and crannies of Ireland that we got to explore on our Ireland roadtrip.  This one is small but delightful—today we visit Clonmacnoise Monastery! 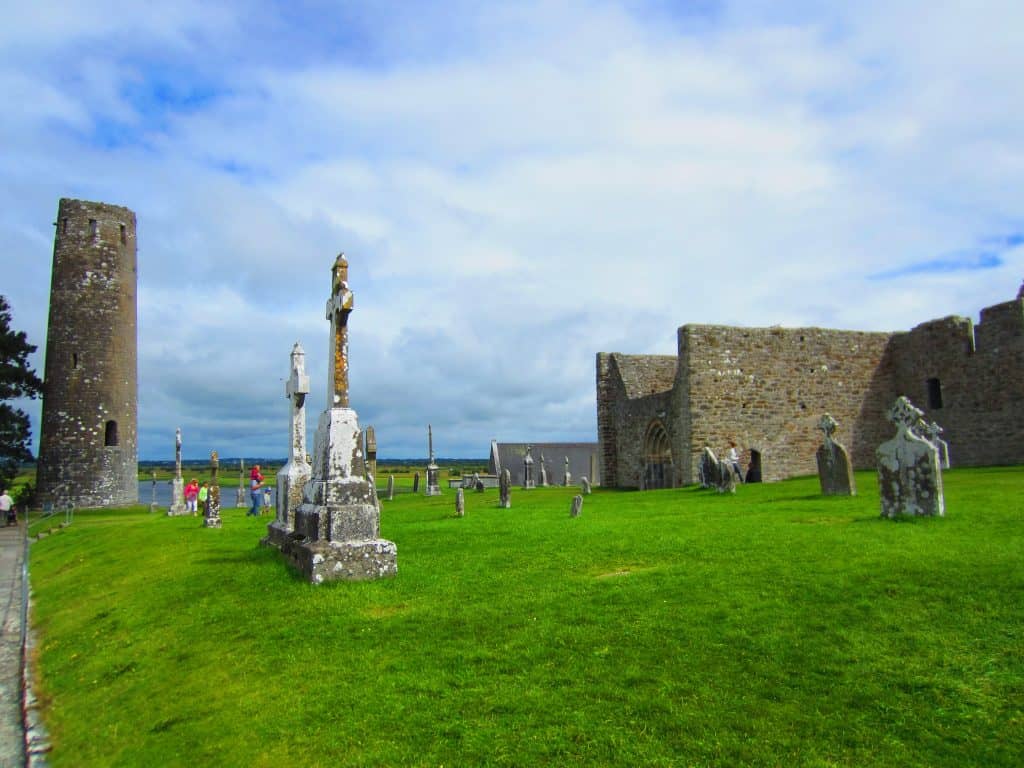 We were at the end of our week in Ireland and had spent the previous night in Kilkee in order to see the gorgeous cliffs at Loop Head Lighthouse, then were driving to Dublin for our final day.

Clonmacnoise makes a perfect stop on this route, being right off the highway about halfway between Galway and Dublin.  It’s also a convenient addition to a Dublin day trip or overall Ireland roadtrip itinerary. 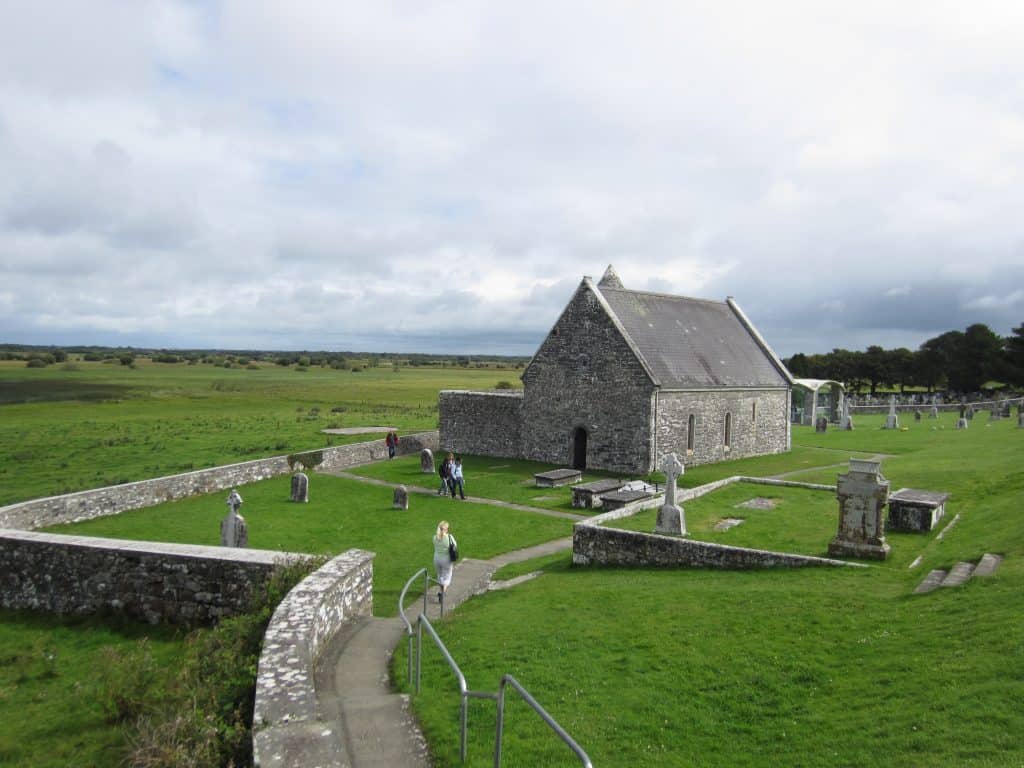 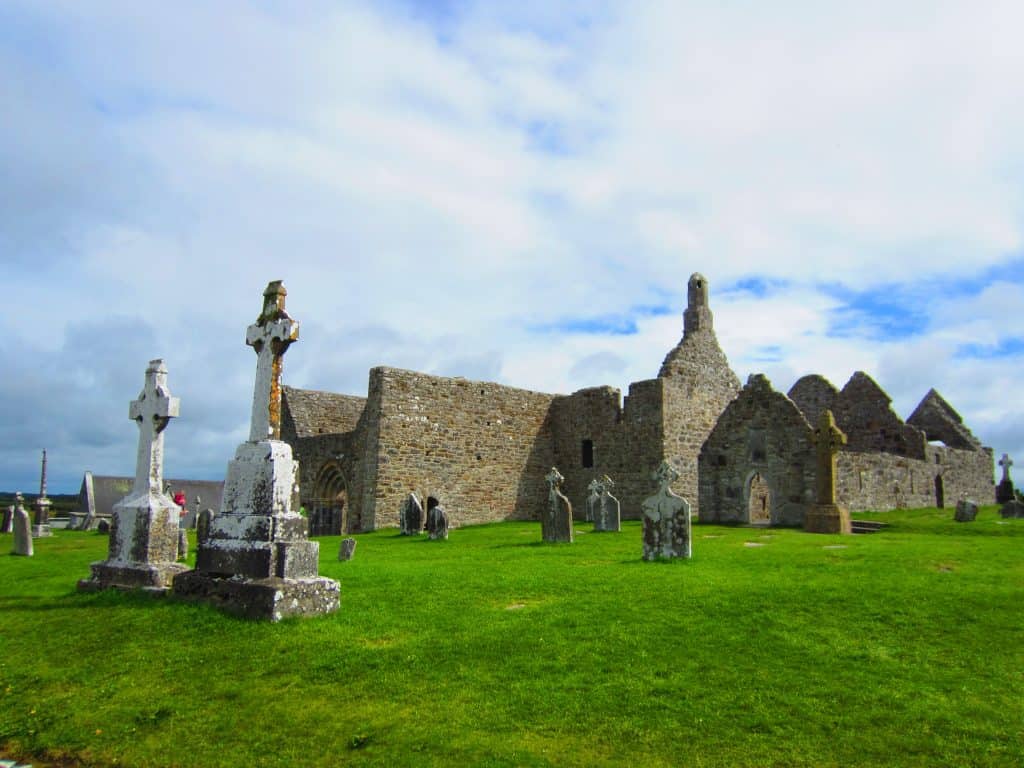 Clonmacnoise is an ancient monastic site dating back to the mid-6th century AD.  It was founded by St. Ciaran around 544 AD and became a major center of learning, religion, craftsmanship, and trade during the Golden Age of Learning in Ireland (roughly 6th through 9th century).

Scholars from all over Europe visited the monastery during this time period.  Because of this, several famous historical texts were written here as well, particularly in the 11th and 12th centuries.

It’s a very well-preserved ancient site, and visitors can see a lot of different elements in one visit.  The monastery ruins include three high crosses, the cathedral ruins, seven churches (from about the 10th-13th centuries), two round towers, and tons of very old grave slabs and tombstones.  It’s also a very easy stop if you’re traveling across from the west coast over to Dublin. 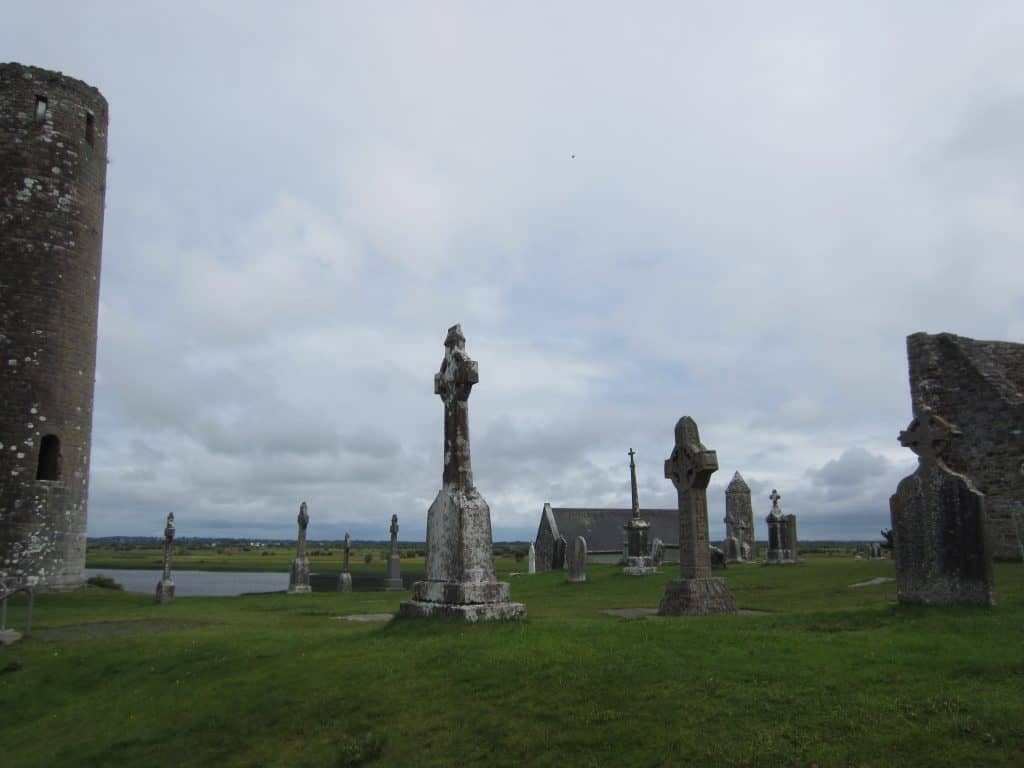 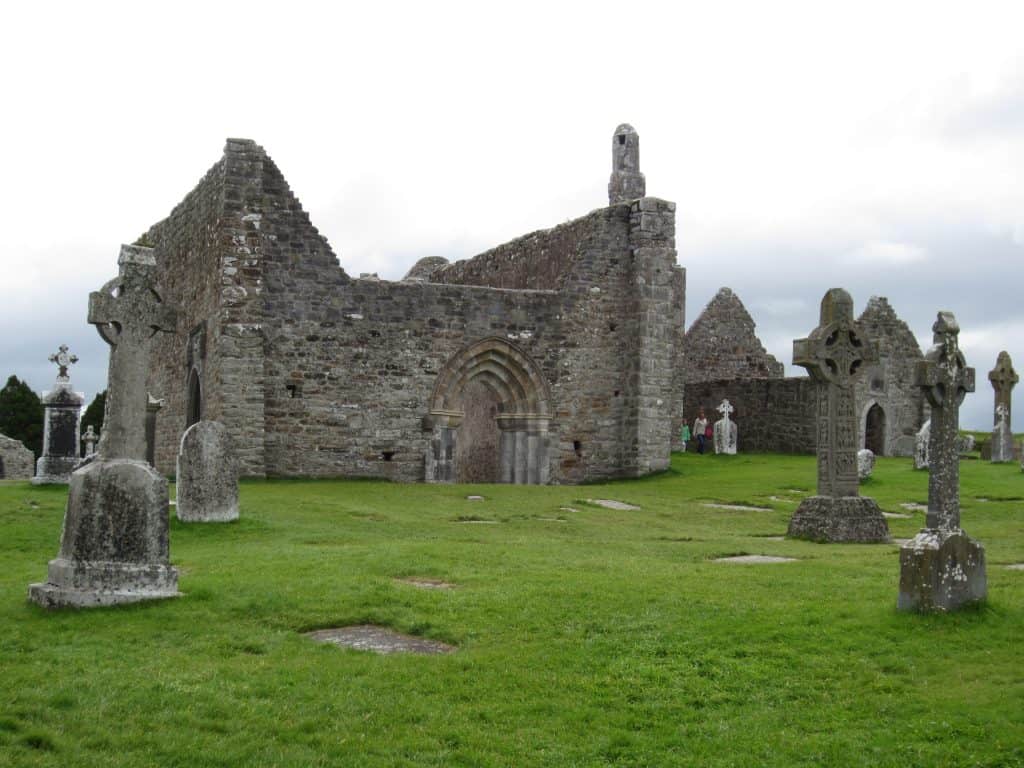 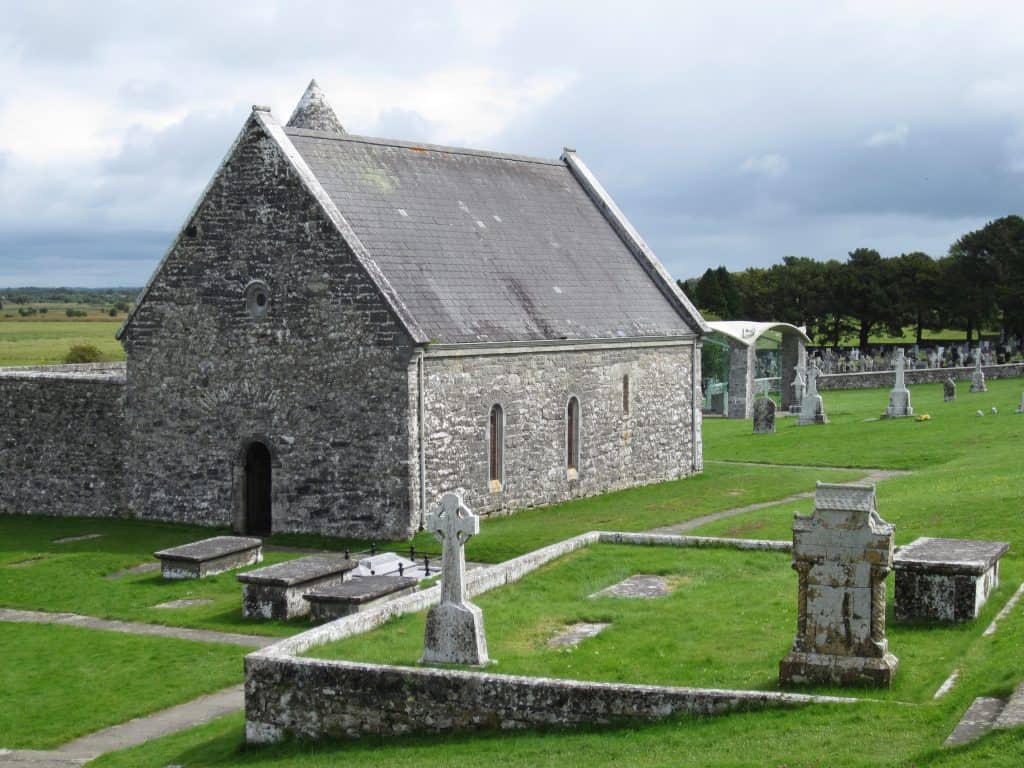 This sentence from the Clonmacnoise Monastery Wikipedia article just tickled my funny bone for some reason…I love the “at least XX times” parts.

Clonmacnoise’s period of greatest growth came between the 8th and 12th centuries. It was attacked frequently during these four centuries, mostly by the English (at least 40 times), the Irish (at least 27 times), the Vikings (at least 7 times) and Normans (at least 6 times).

I mean seriously, these monks apparently knew how to take care of themselves! 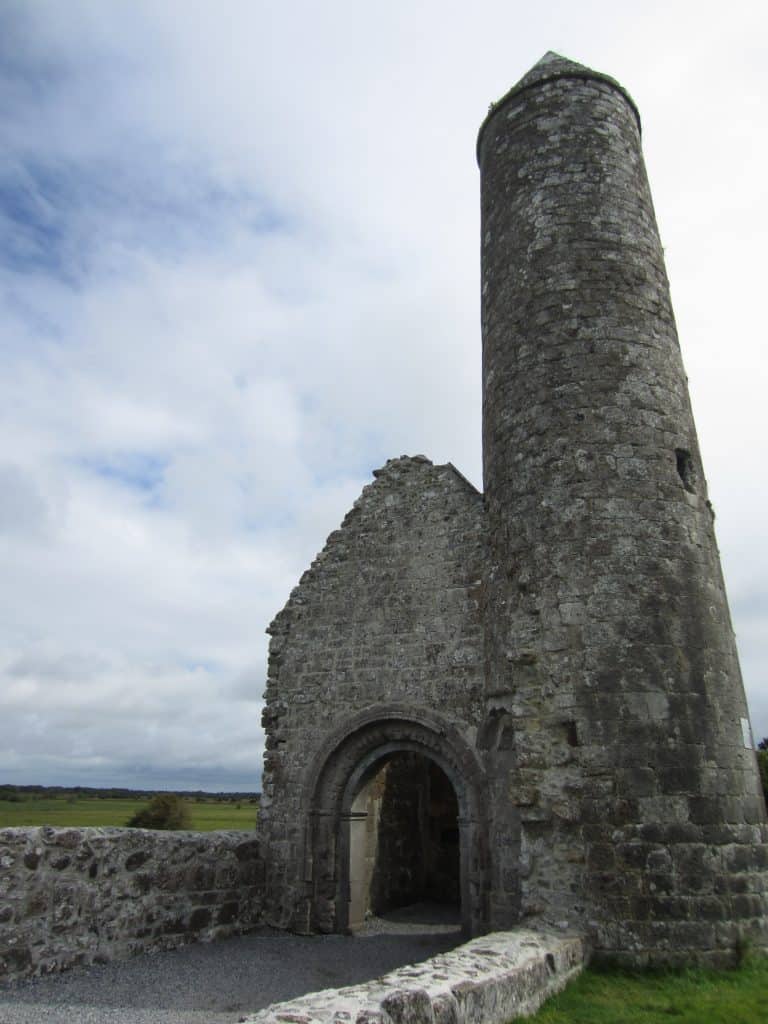 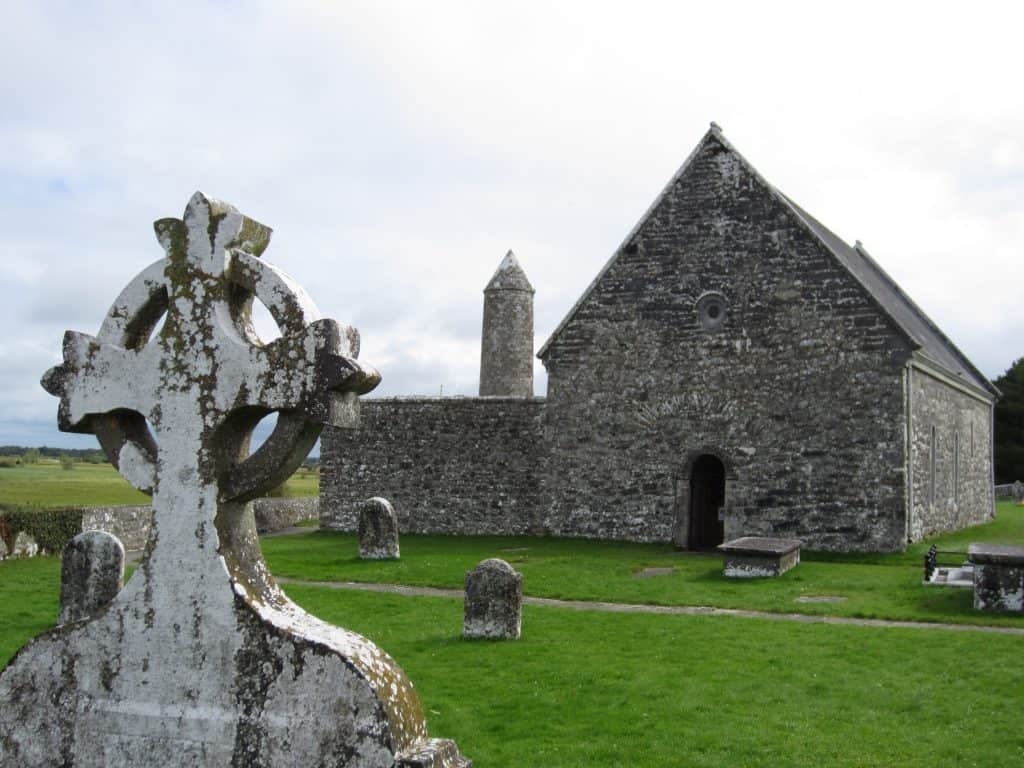 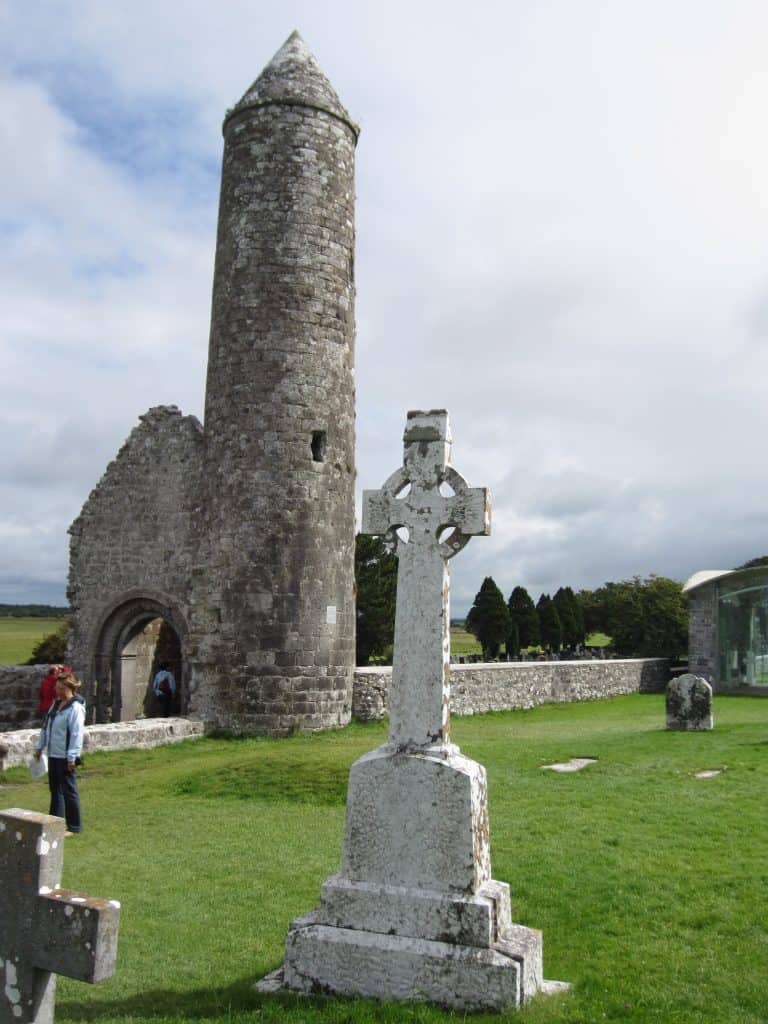 This trip to Ireland was when I was on a weird hyper-saturated or hyper-stylized photo kick, so a lot of my pics from this trip are kind intense.

I actually kind of love the effect with these large stone crosses though—quite dramatic! 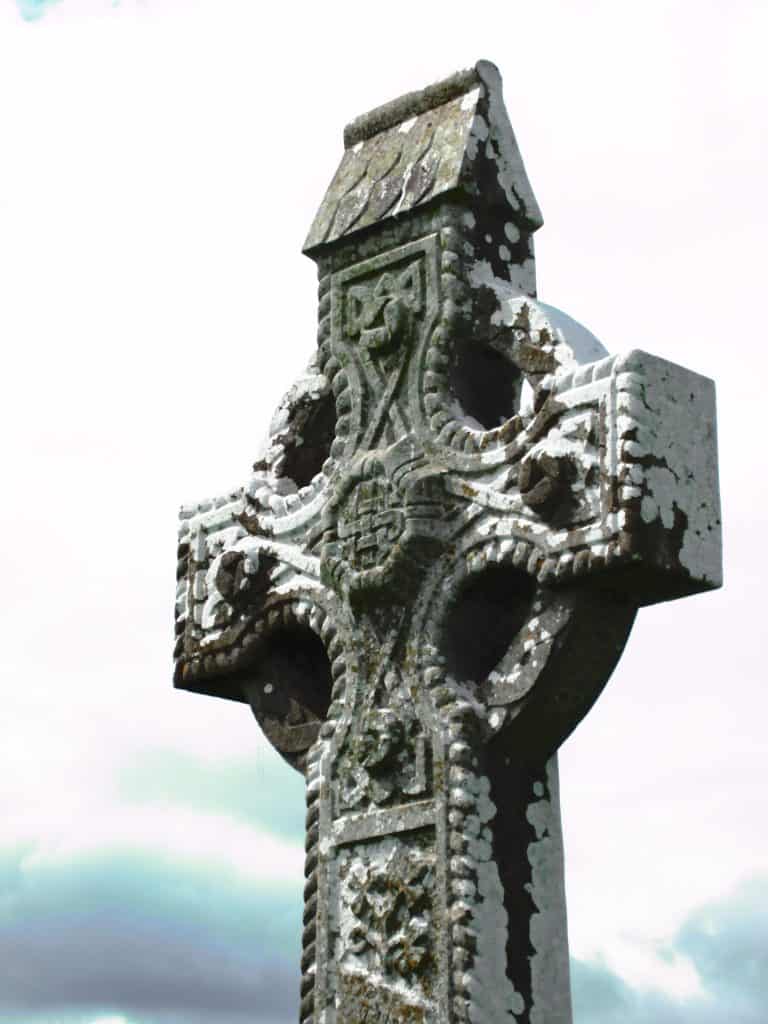 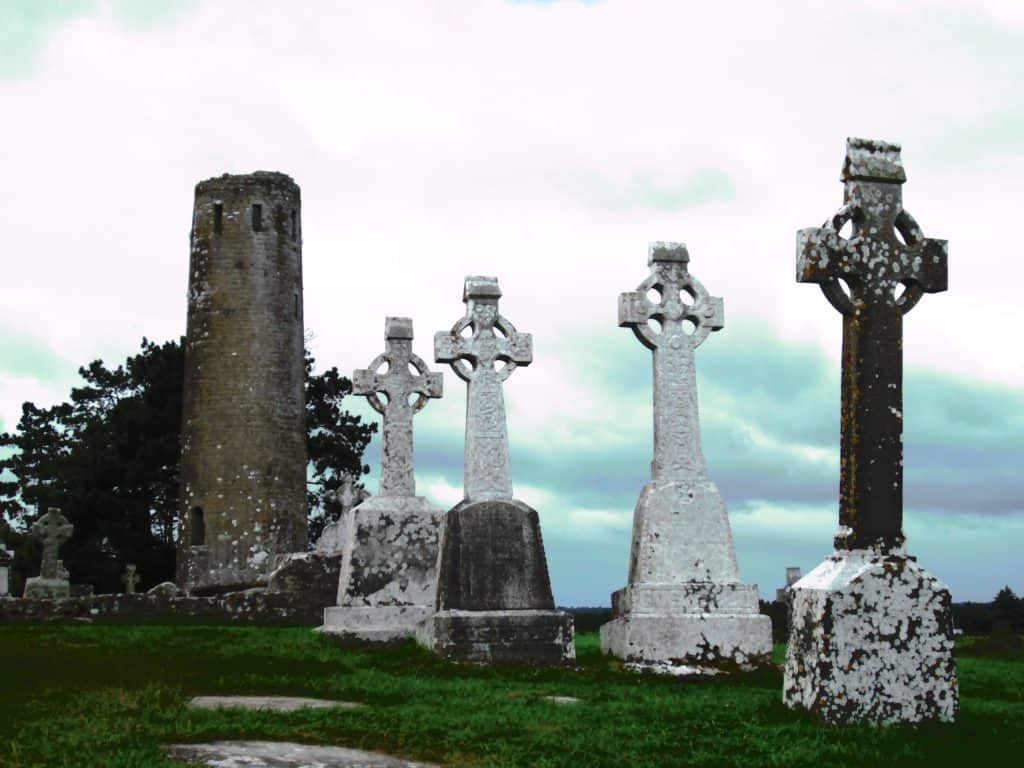 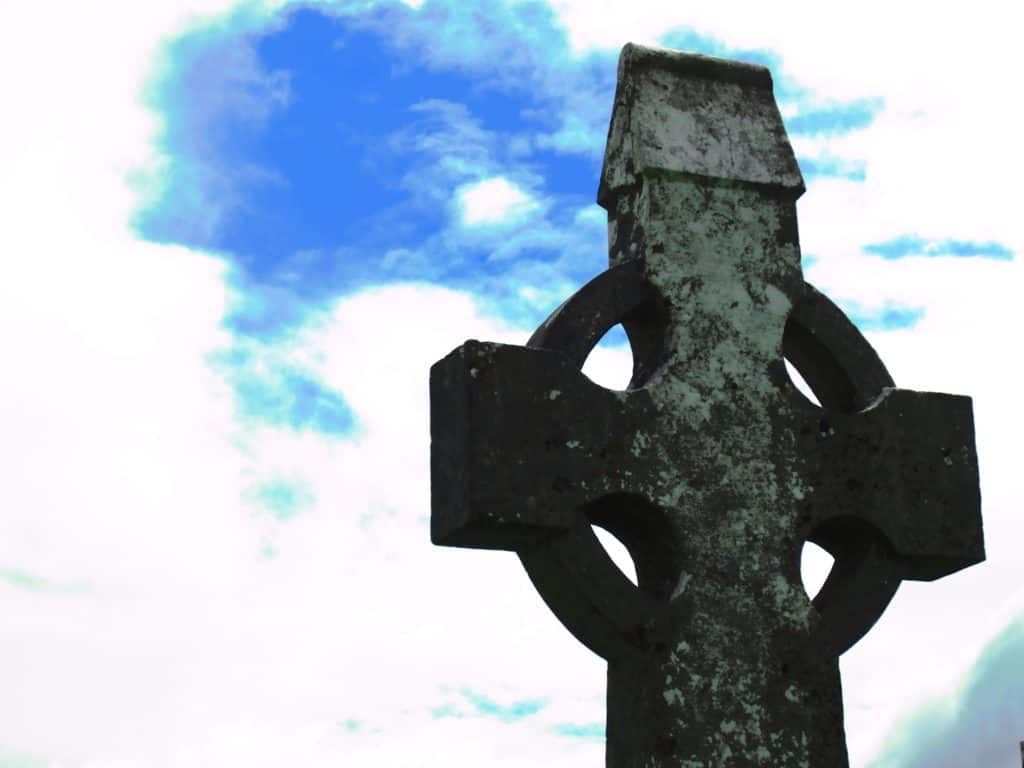 There’s some great educational material inside the visitor center that gives you more background on the monastery’s history, the individual buildings, crosses, and towers you’ll see on your visit, and the area’s history in general.

The large (about 4-meter or 12-foot) sandstone cross below is the original and is in the visitor center, they’ve put a replica in the original spot to preserve this one. 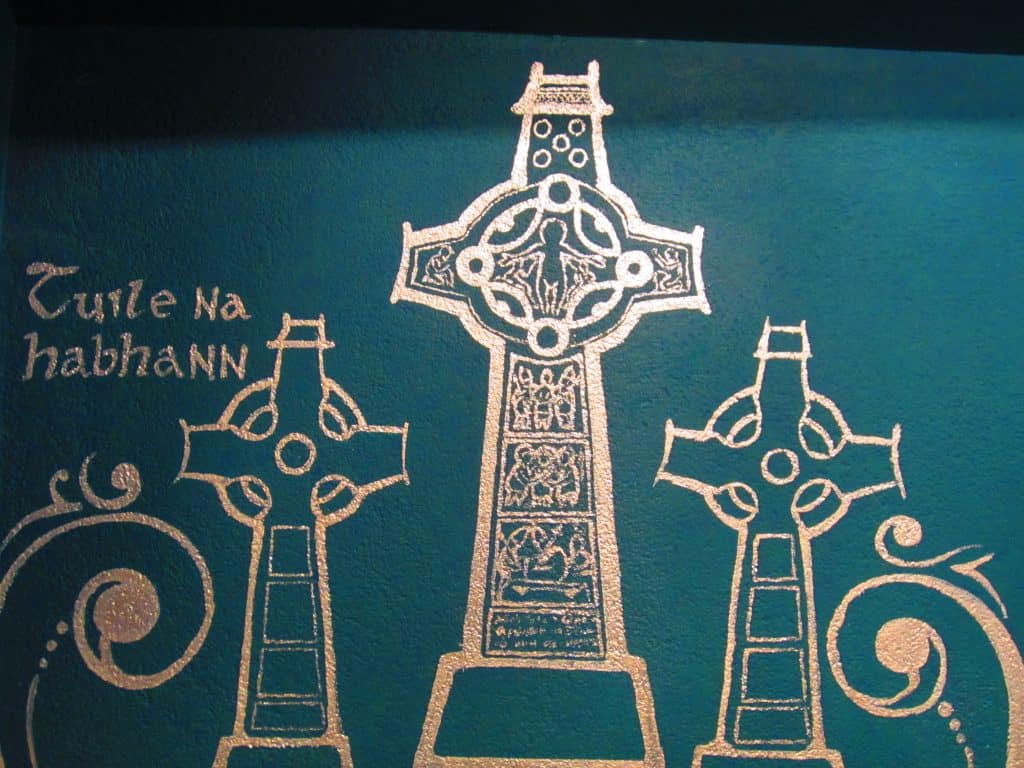 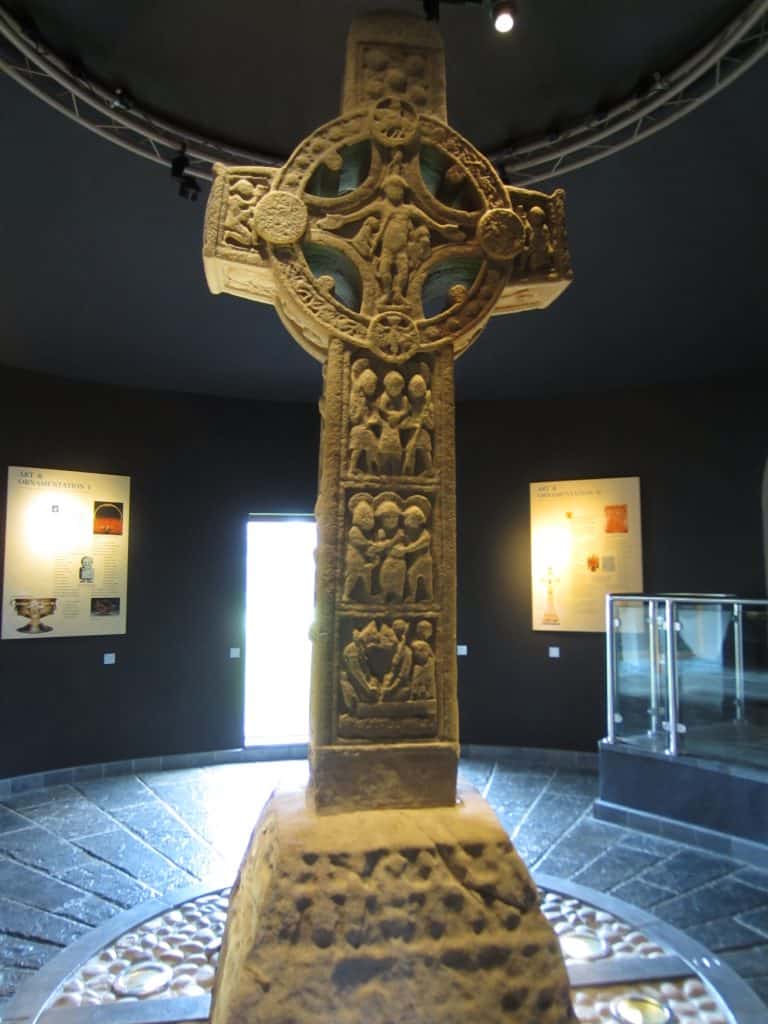 As I mentioned at the outset, Clonmacnoise Monastery is a great stop along a larger Irish roadtrip.  You don’t have to spend long here (an hour or two) but it really is an incredibly well-preserved site and you can learn tons about the important role it played in Ireland’s religious and political history.

How to visit Clonmacnoise Monastery in Ireland

If this floats your boat, check out these other historical sites! 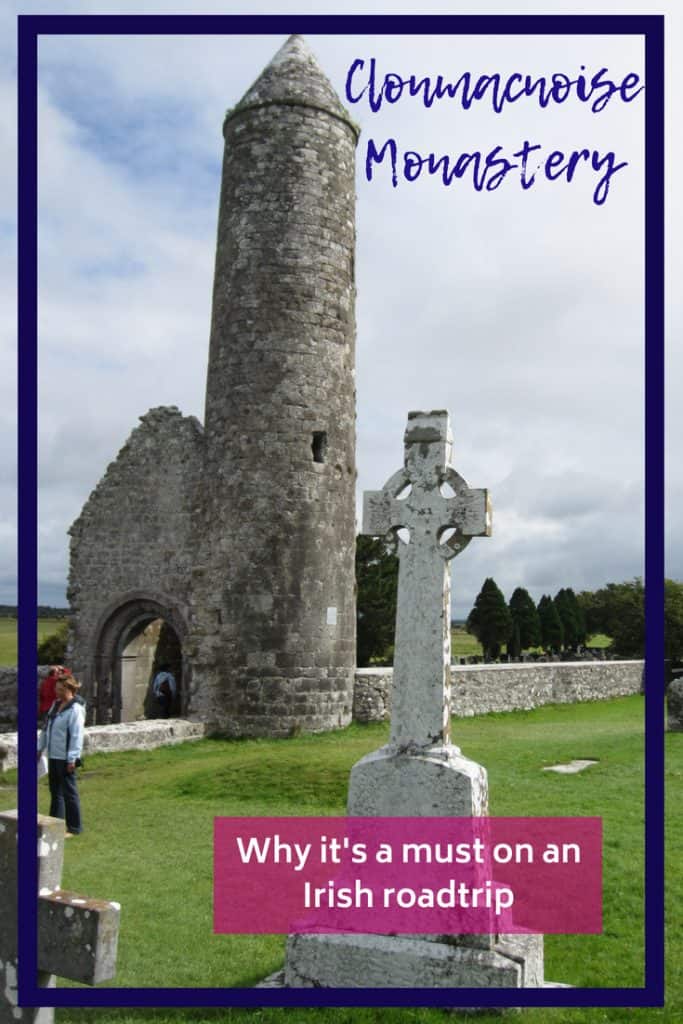 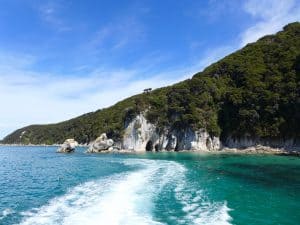 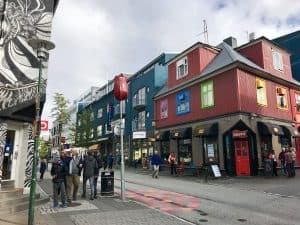