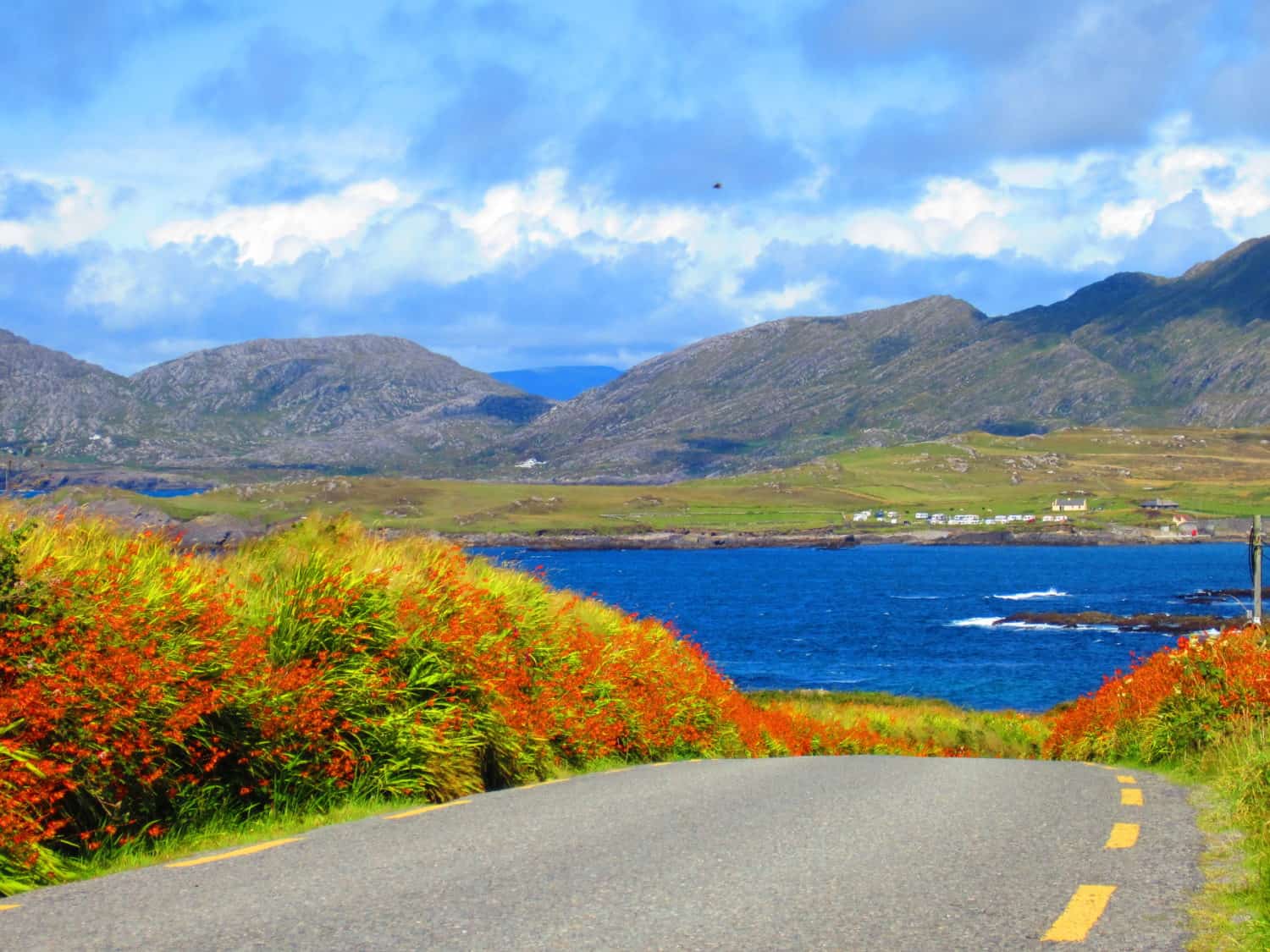 If you ask my parents what their favorite thing in our Ireland roadtrip was, both will say hands-down the day we spent driving the Beara Peninsula.  That might be surprising if you haven’t heard of it.  Which was kind of the point.

Since we were going in mid-August, which is still within peak tourist season, my goal in putting our Ireland roadtrip together was avoiding the most tourist-packed spots so that we didn’t spend the entire trip stuck behind tour buses and fighting for parking spots.  In my research, the Beara Peninsula got rave reviews but almost never appeared on the must-do checklist and it didn’t look like any tour groups went there.  So basically right up my alley. 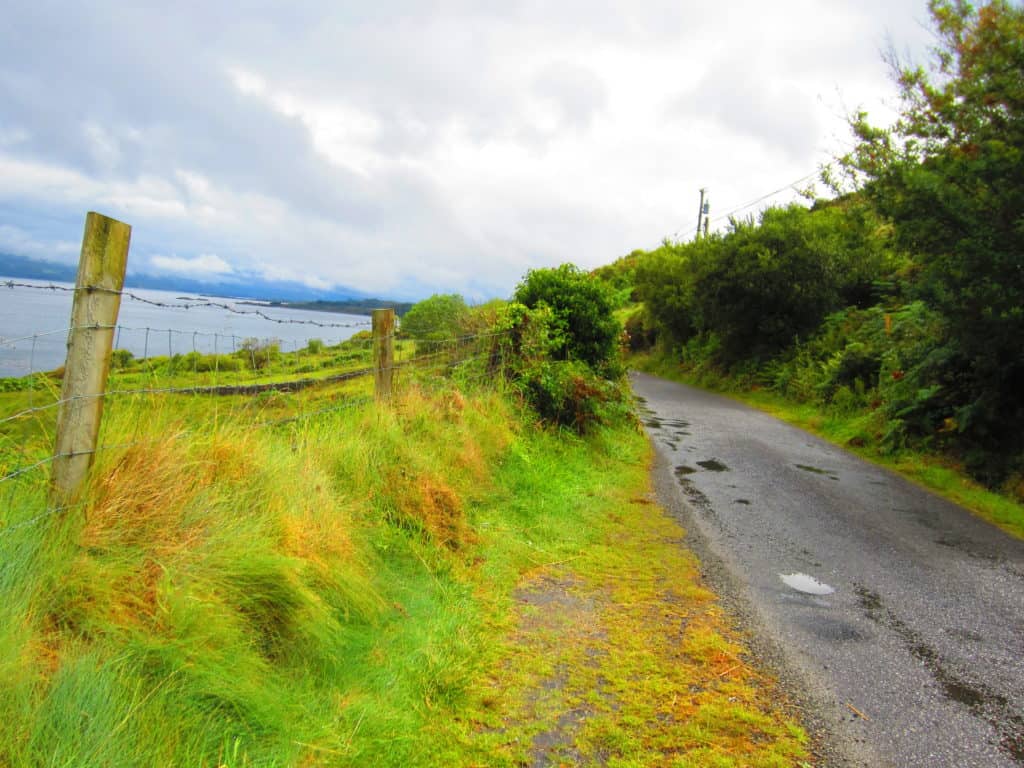 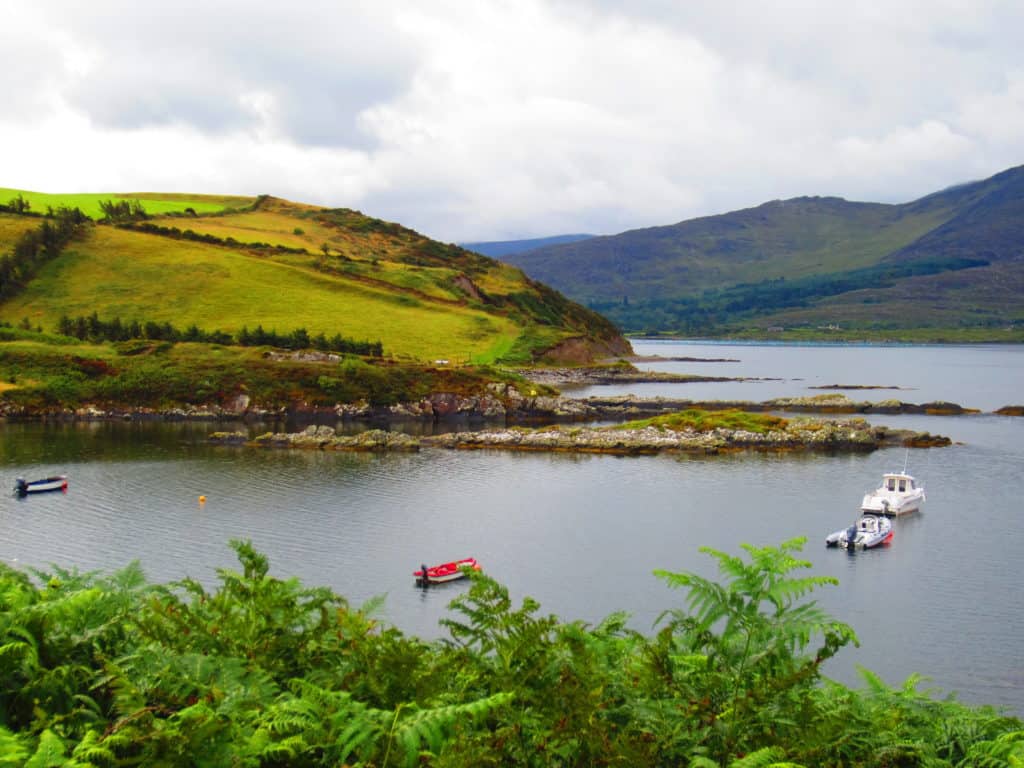 I highly recommend the Beara Peninsula (also called Ring of Beara) to anyone visiting the west coast of Ireland.  This post is kind of half advice and half self-indulgent photo essay because I really had trouble narrowing down my pictures—each one has something a little unique in it and I’m hoping you fall in love with this lesser-known peninsula like we did.

My tips for a smooth drive around Beara are at the bottom of the post, & you can read my detailed guide to driving in Ireland here! 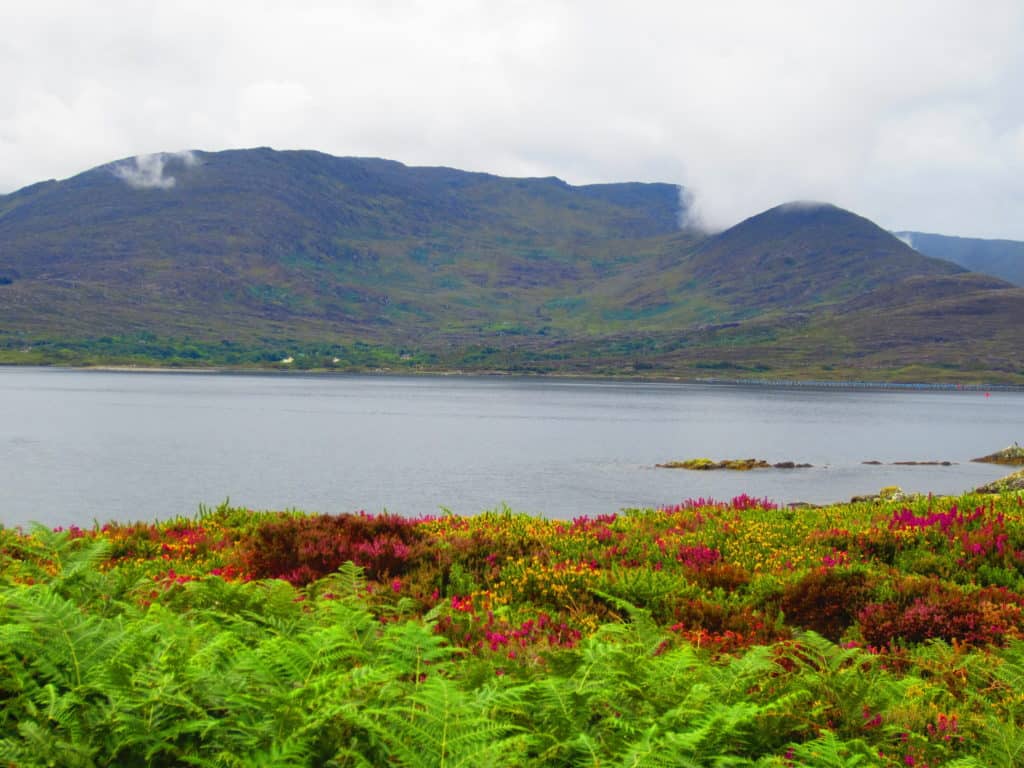 Read these for an awesome Irish roadtrip!

I somehow accidentally had a high-saturation setting on my camera for most of my Ireland trip, but honestly this is what it looked like in real life, so it’s actually kind of perfect.  You would not BELIEVE the colors unless you see them in person.

After landing in Dublin, driving to Kilkenny and staying the night, and then driving through Cashel and around the Sheeps Head Peninsula the previous day, we based ourselves in Kenmare for two nights.  This allowed us to stay put for a bit, and it was easy to spend a day each driving both the Beara Peninsula and the Dingle Peninsula from there. 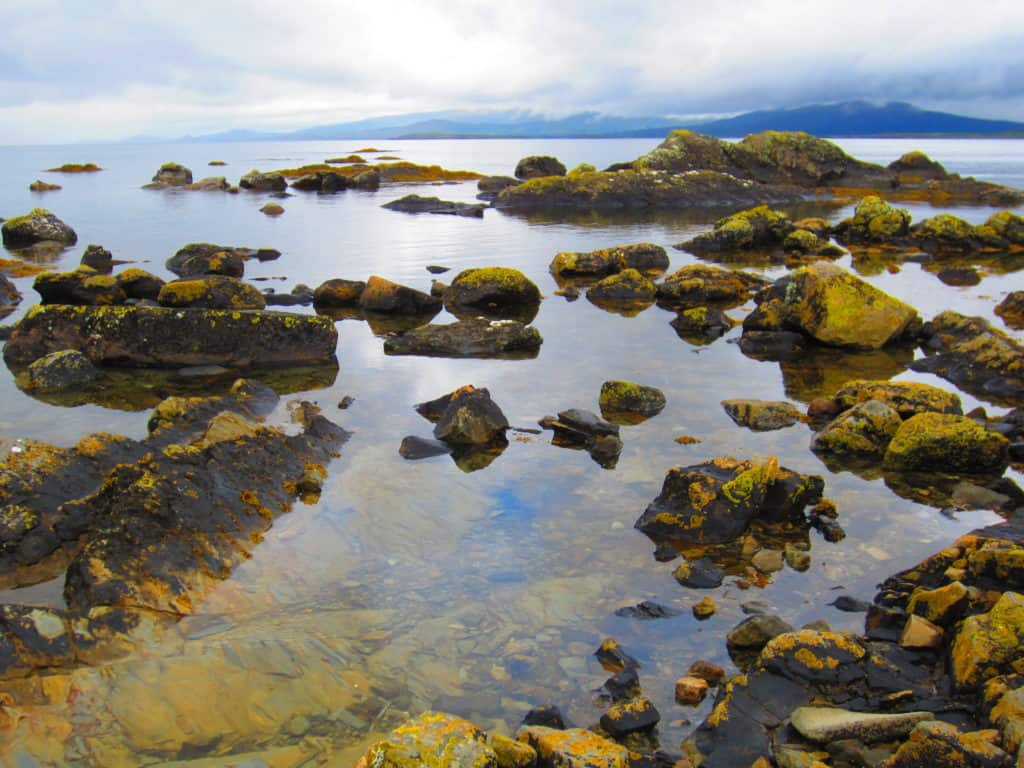 We had a later breakfast and headed out, though it was pouring on the drive over to the peninsula.  It stopped raining when we started the drive around, though it was still a bit overcast.  Lent a bit of moodiness to the scene.  These pictures are from a stop later in the day in Eeyries, an adorable colorful village.  We stopped at Auntie May’s for coffee and some biscotti, which I highly recommend. 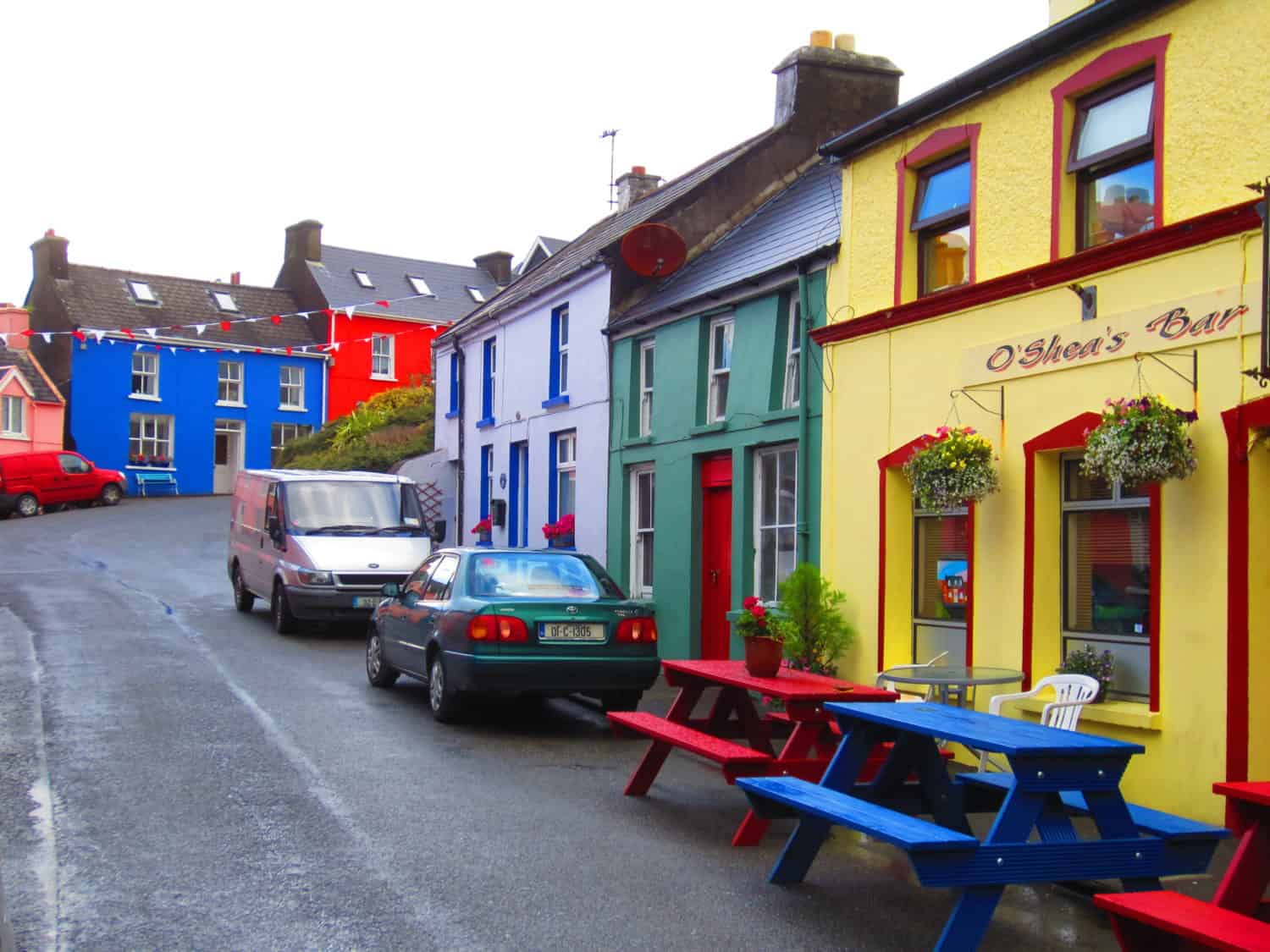 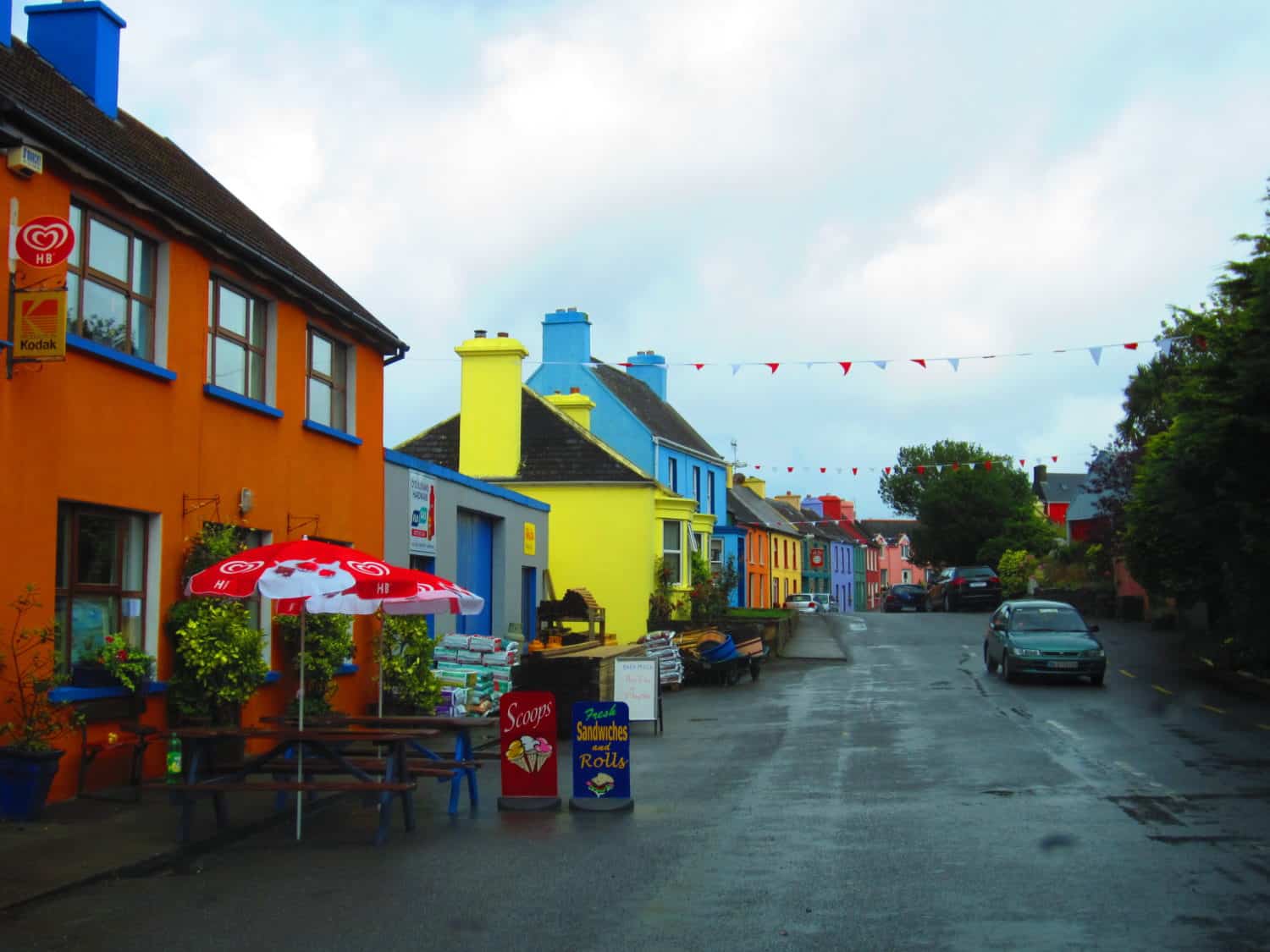 Not long into the drive the rain cleared up and we were blessed with intense blue skies. 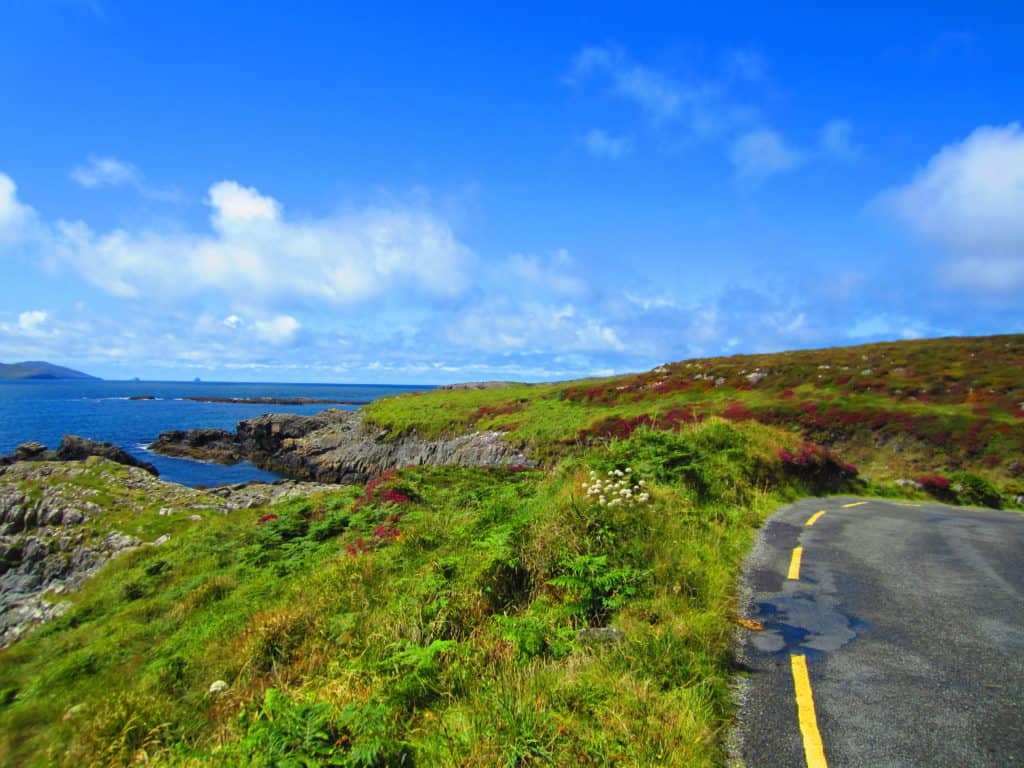 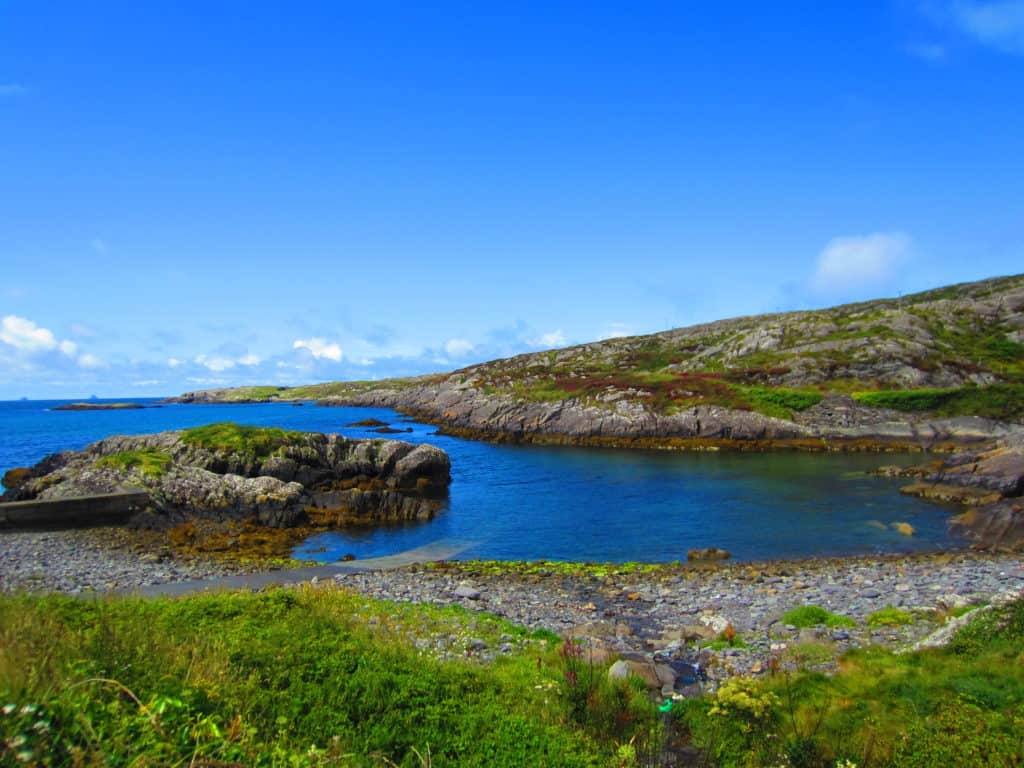 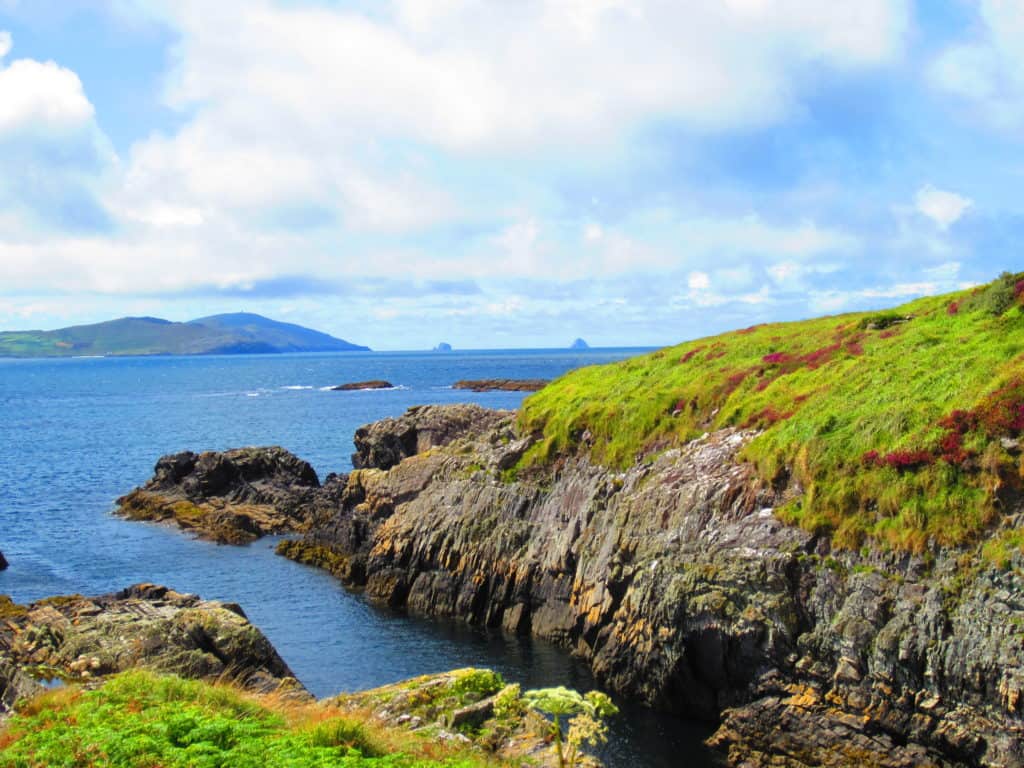 Read next:  How to Pick the Best Hotel or Rental Every Time

I loved the patches of purple flowers (heather?) that carpeted all the greenery, the color really popped. 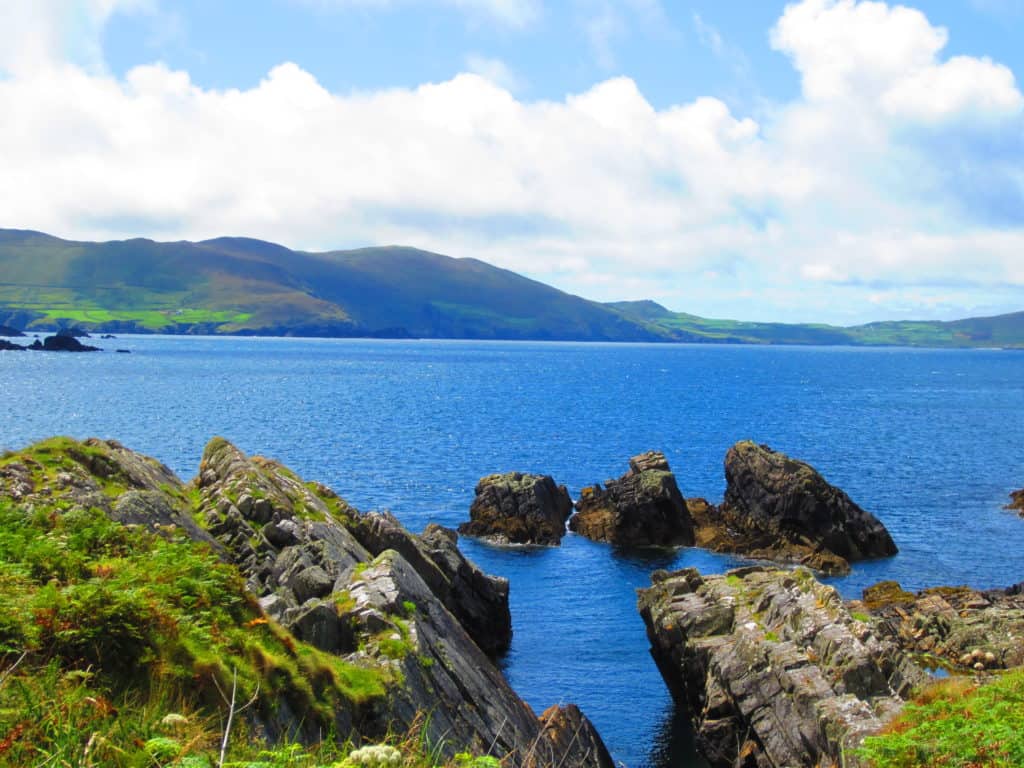 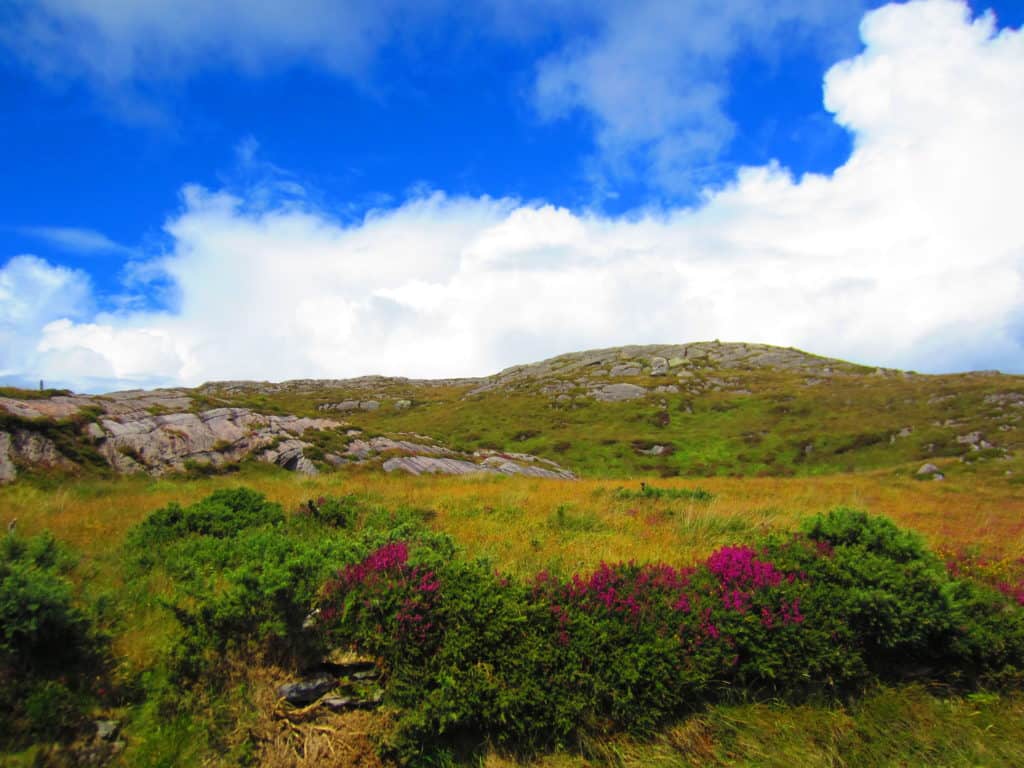 Every bend we drove around had a view that just smacked you in the face.  We seriously were stopping like every five minutes (which is one of many reasons  that the driving times on map programs aren’t accurate).

One of the things that’s fascinating to me is how much history is just lying about in Ireland.  There are so many old buildings and ruins that are simply a part of the landscape, part of daily life. 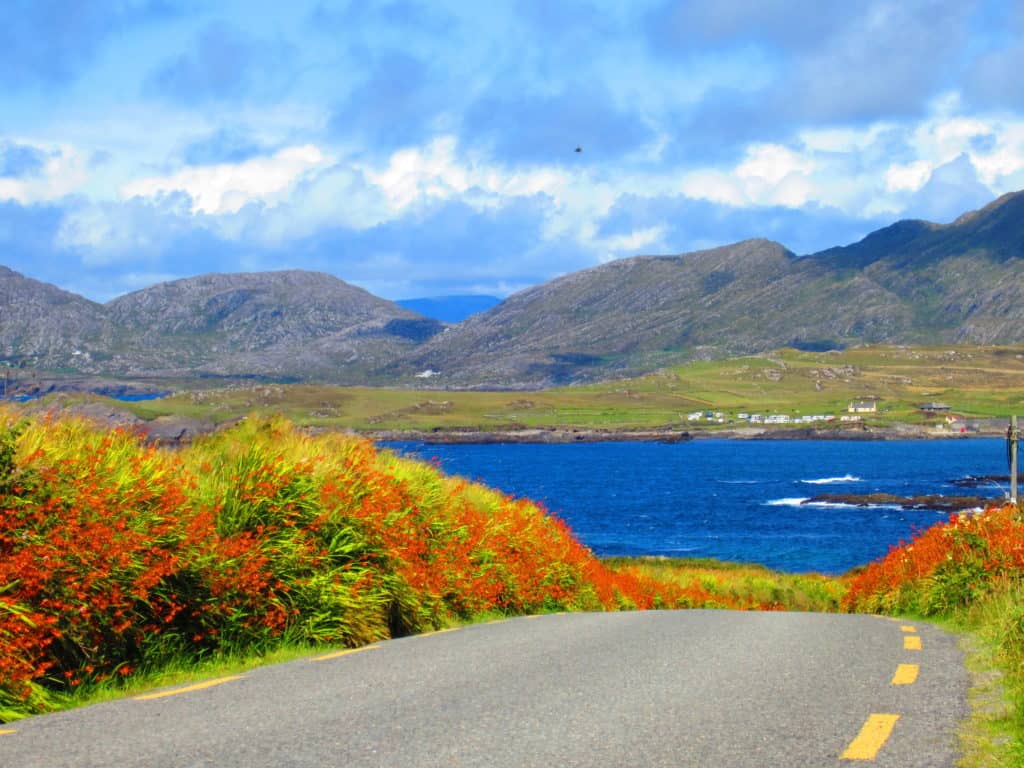 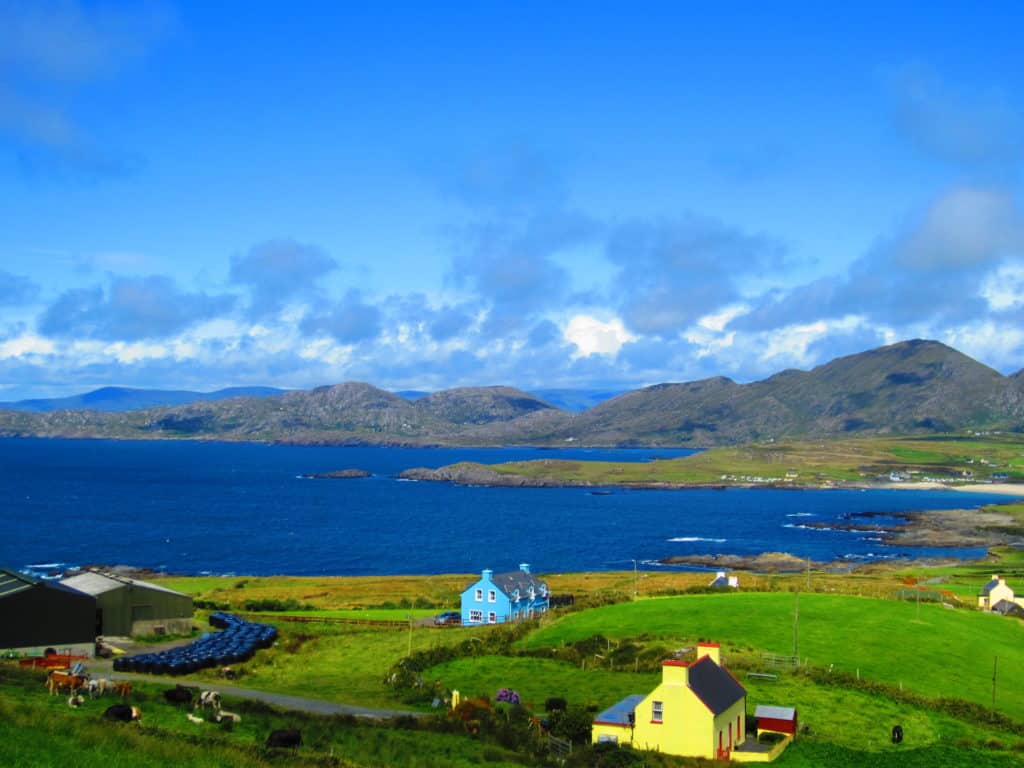 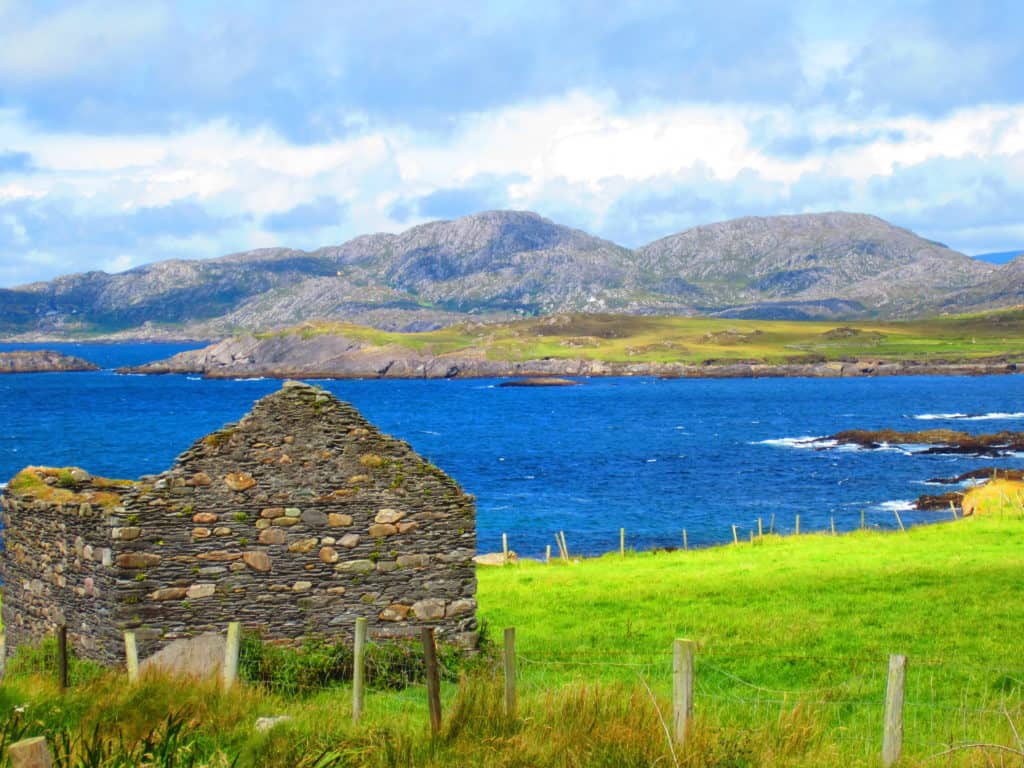 We drove out to the Dursey Cable Car but didn’t cross over.  I loved the clean patchwork land parcels, split up by stone fences (largely constructed the old way, with dry stonework). 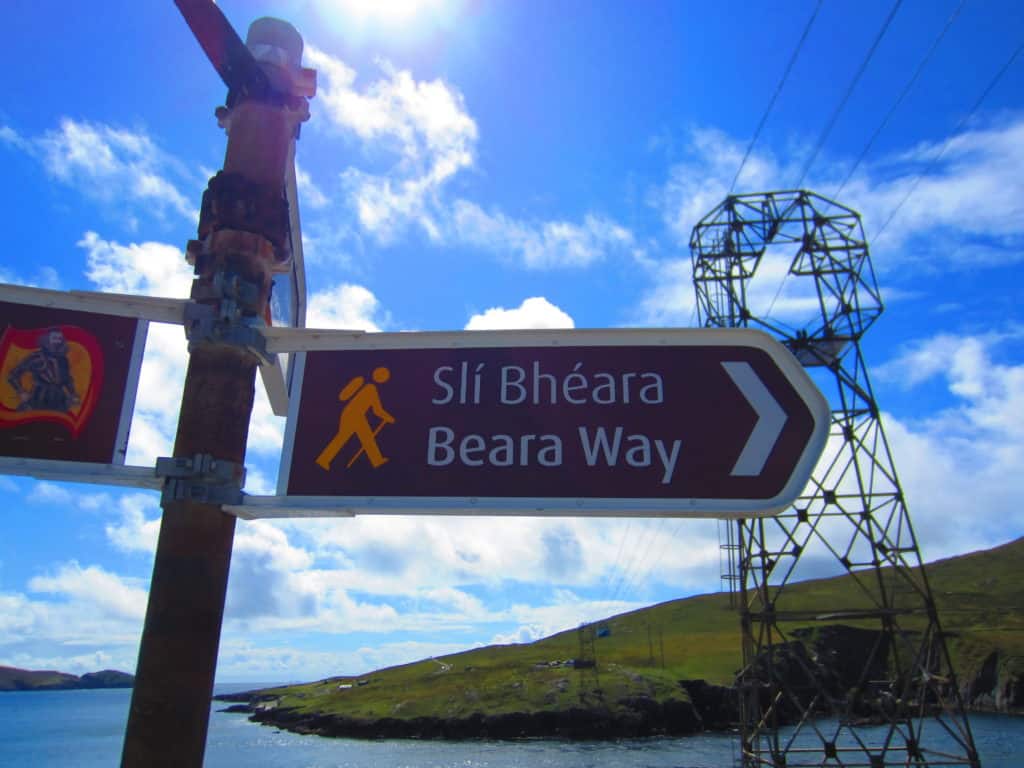 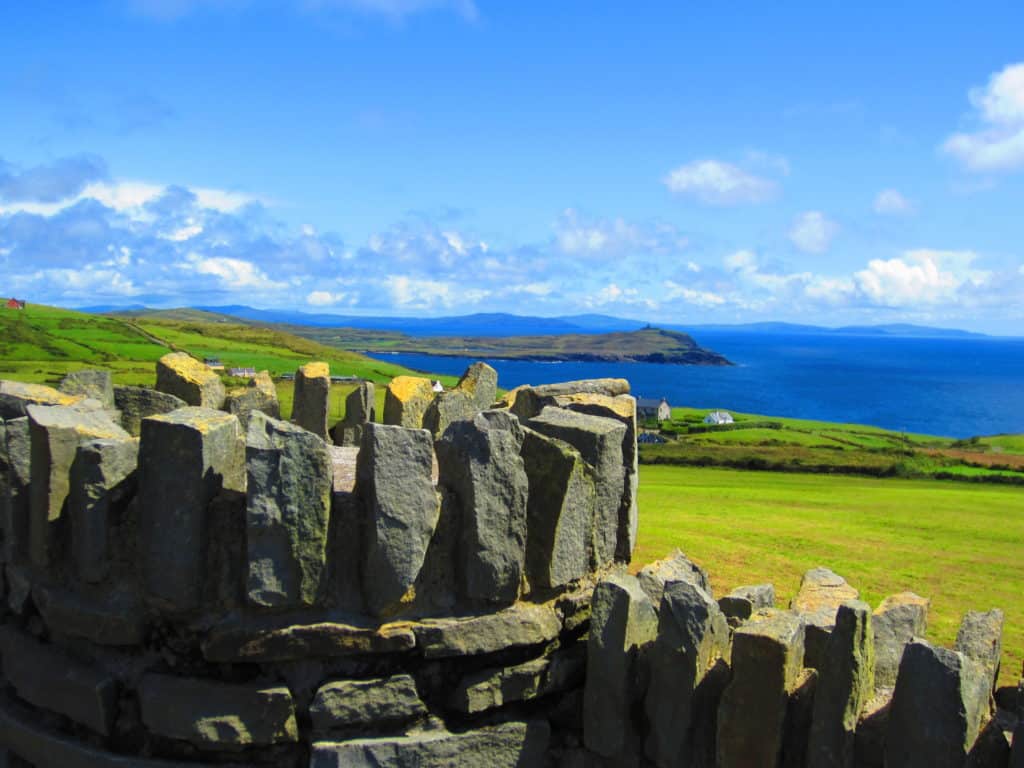 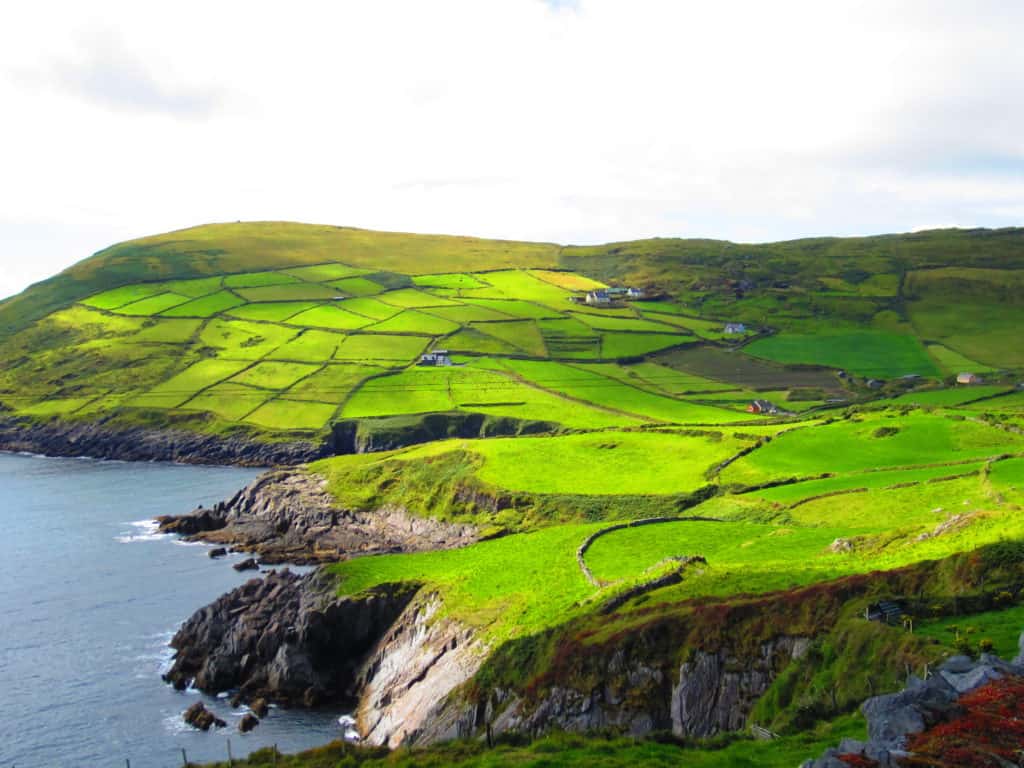 The rain earlier in the day had created tons of waterfalls, which we kept stopping to capture.  At that super powerful one, we also came upon an elderly local man with the strongest brogue, and stopped to talk with him for a while.  My parents were making friends with old people the entire trip 🙂 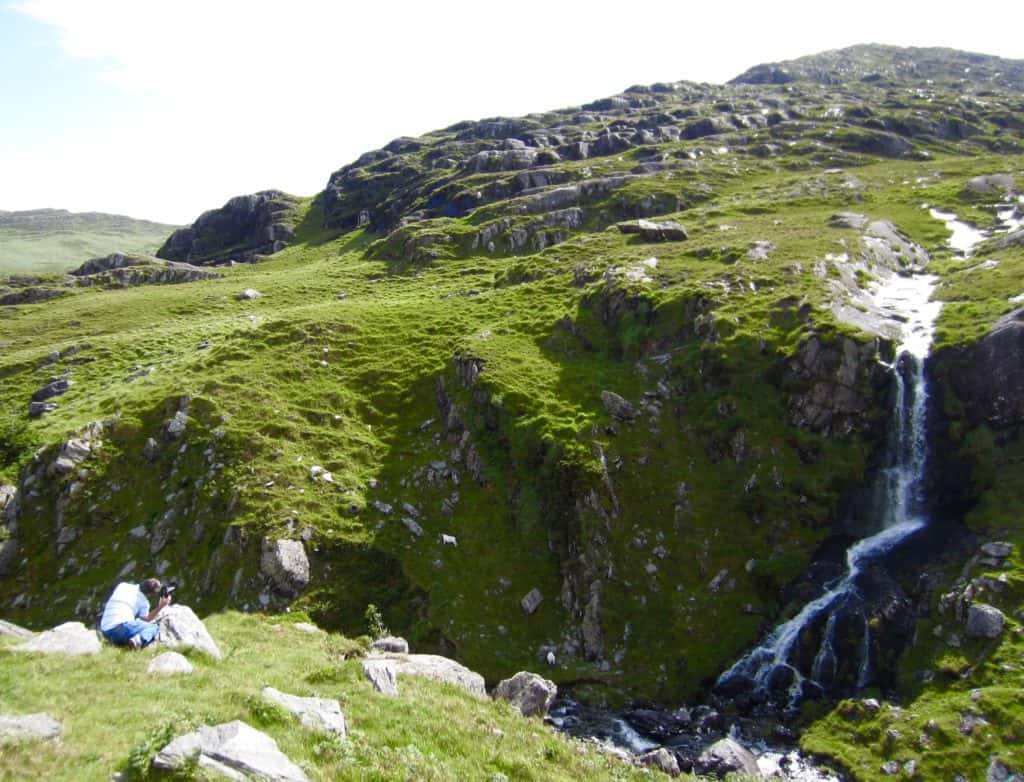 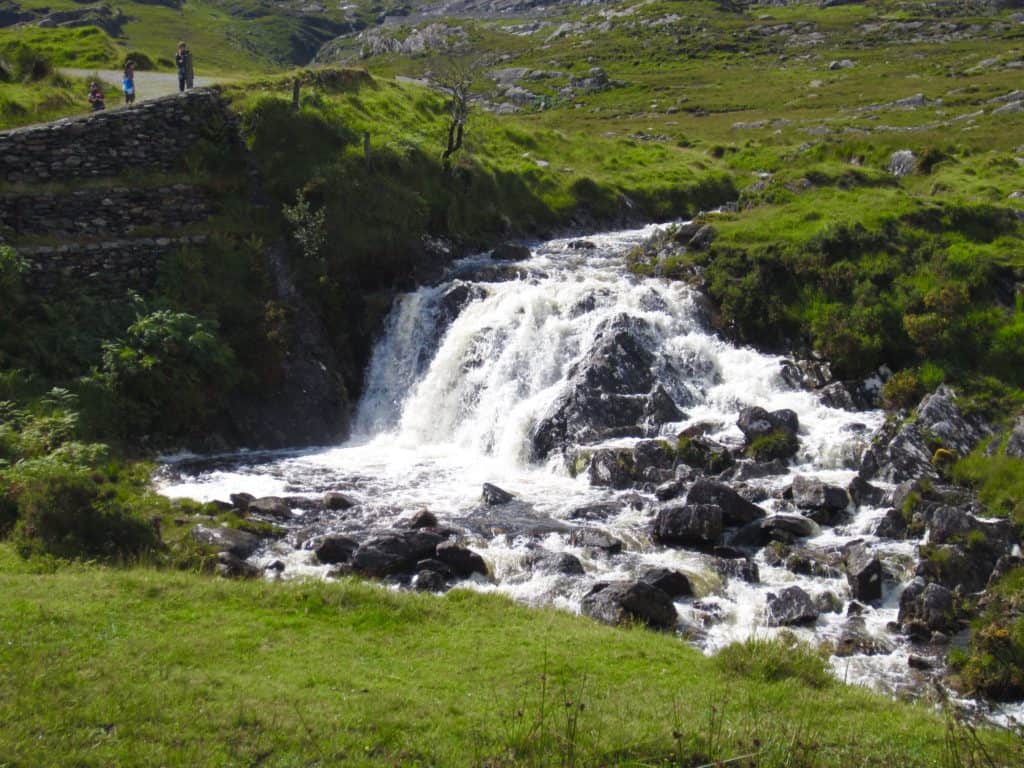 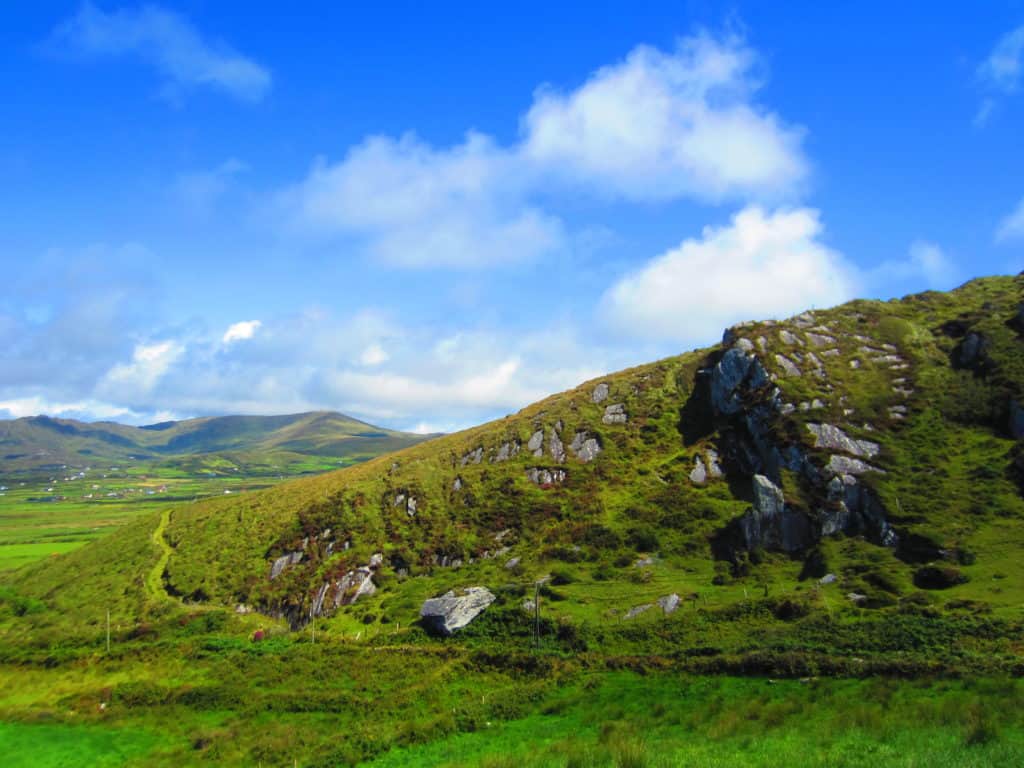 In addition to the crashing waves, waterfalls, and greenery, we wound our way up switchbacks to Healy Pass, one of Ireland’s great drives.  The pass is in the Caha Mountains and actually cuts through the middle of the peninsula.  Because we had the whole day to spend on the peninsula, we drove the ring first, then cut through the peninsula over the pass. 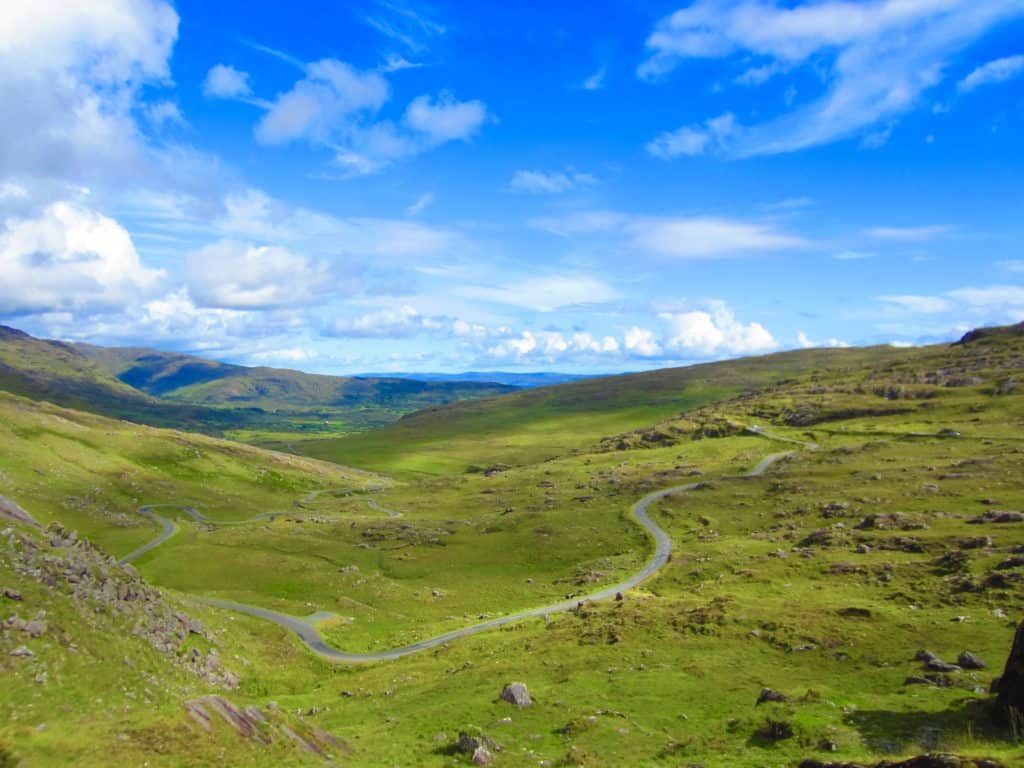 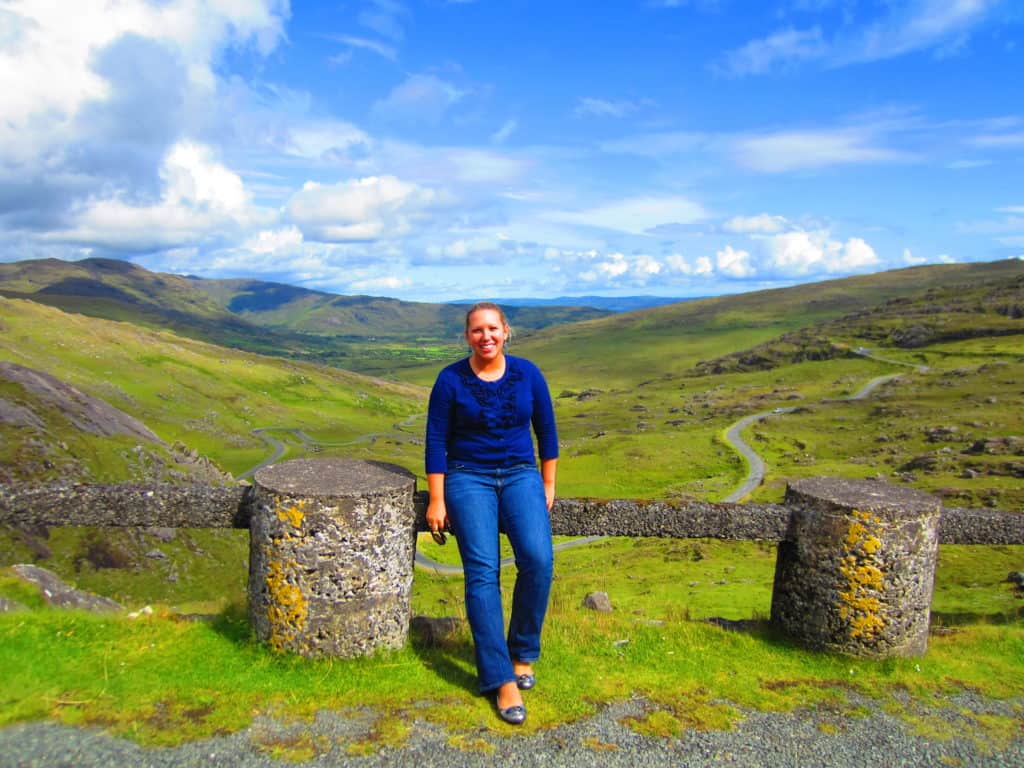 Full disclosure:  I can’t for the life of me remember which direction we did this in.  I’m almost sure we did it clockwise, which is what I’ve shown here.  Since you’re driving on the left, it’s easier to pull over on the road if the sea is on your left.  But either way works.  Also, ignore that 3-hour time, it’s not remotely true—this is a full-day drive. 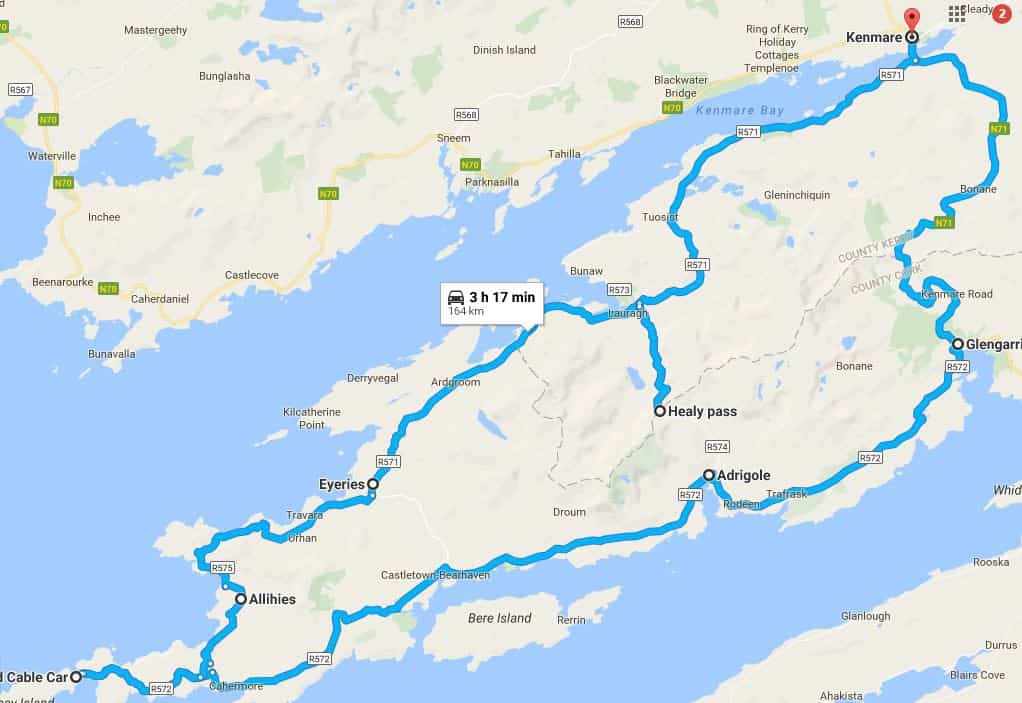 This was one of our favorite days of the entire trip, and I’d love a chance to go back with a better camera and get a ton more pics!

Tips for driving the Beara Peninsula

Check out my detailed guide to driving in Ireland (including renting a car, navigation, narrow roads, etiquette, and more) as well!

Have you done the Ring of Beara?  What other tips would you add to help make it memorable?

Pin to save for later! 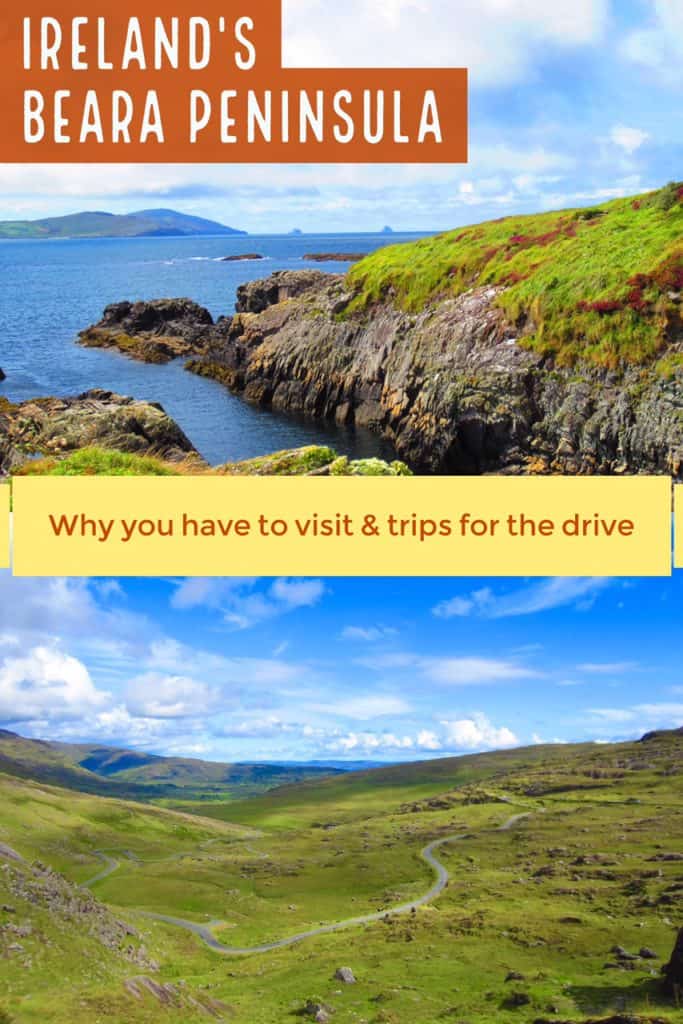 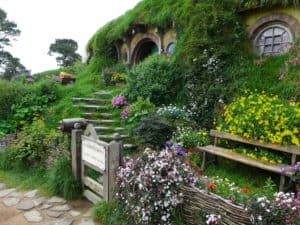 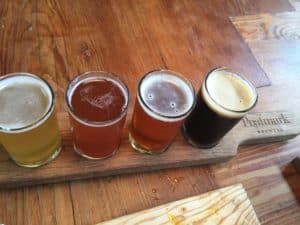 A Perfect Long Weekend in Vancouver and Whistler