What To Do With A Day in Charming Bath, England 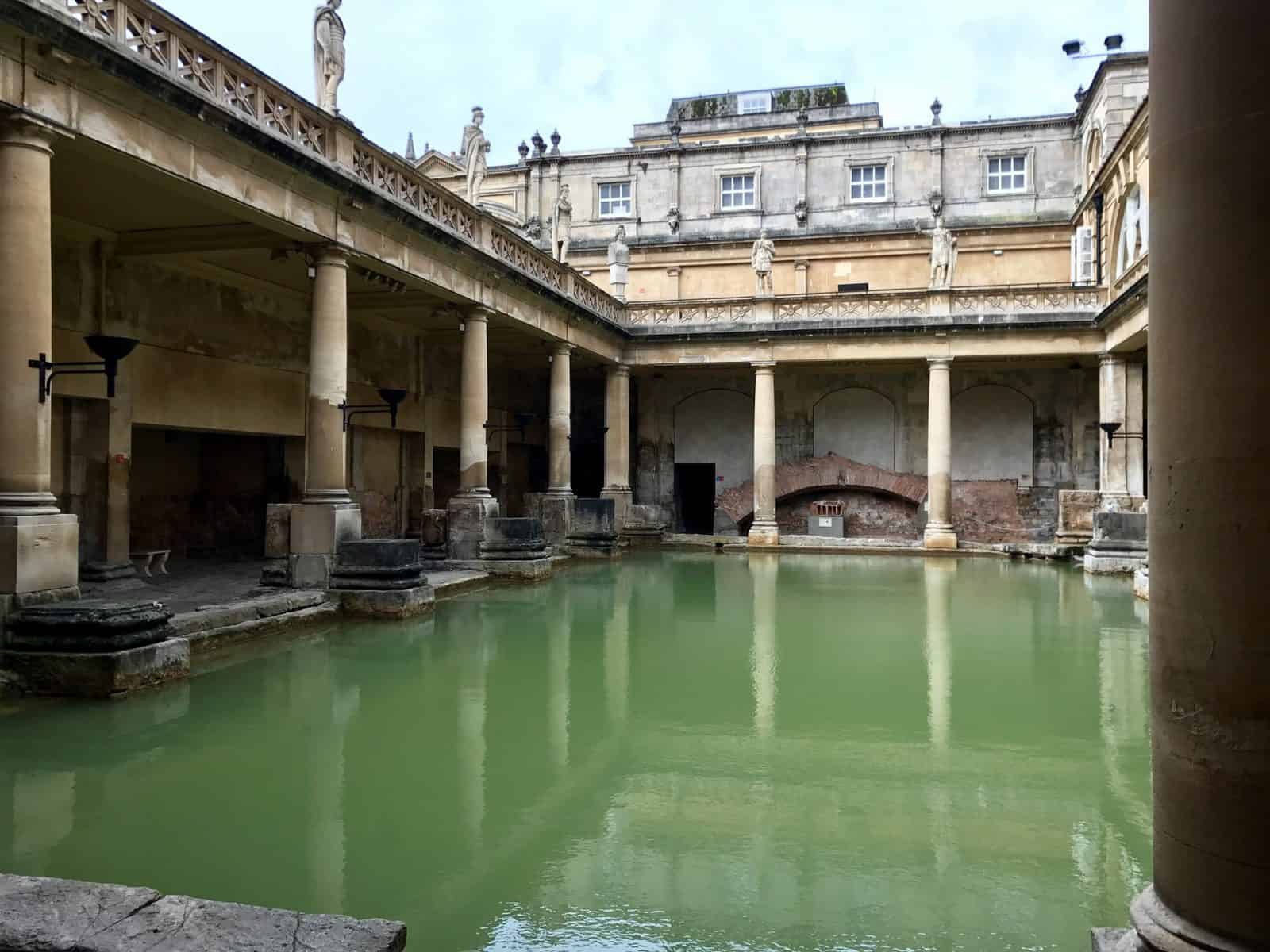 I’m just now starting to get through all of my England and Wales photos from last fall, because we covered SO much ground in just a week and a half—despite the fact that I was in a walking cast.  That’s mostly because I structured the road trip portions of our itinerary carefully to get a taste of some places even without a ton of time.  So as we headed from Devon up to London to end our trip, we managed to catch Powderham Castle, Bath, Salisbury, and Stonehenge along the drive.

We chose to spend the night in Bath, and I was cautiously excited.  I wasn’t sure whether I should have high expectations or whether it would feel too touristy, but since it was a common stomping ground of Jane Austen and most Regency romance novel heroines that I’ve spent (literary) time with, I was stoked to get a good real-life picture of it in my head. 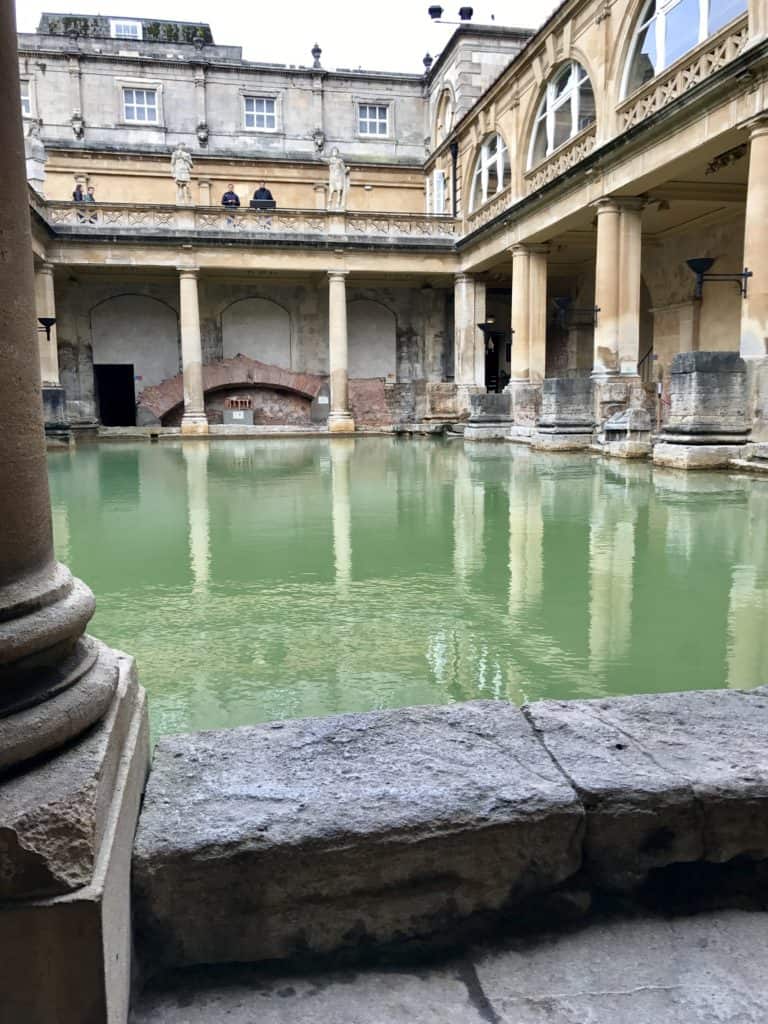 Because we had less than 24 hours in Bath (we arrived around 5:30p and needed to hit the road around 10:30a the next morning), we made a game plan to get a really good sampling of the town but not feel too rushed or overdo it.  Here’s what we focused on to maximize our time.

What to do in Bath with less than 24 hours

We’d driven up from Torquay, in the south, stopping at Powderham Castle along the way (totally cute!).  We found our B&B, Henrietta House, quite easily, found parking, and got settled in.

We had chosen Henrietta House because it’s really central to everything so we could walk around really easily.  We only had about 16 hours total in Bath (including sleeping!), so we wanted to make the most of it.

I was impressed by all the lovely little touches they provided to make it feel homey, like biscuits and a carafe of water—and breakfast the next morning was no slouch either!  I wish we could have stayed here longer, and if I return to Bath at some point I’ll definitely be staying here!

Since we had such a short time and it was already right at sunset, we set out to explore immediately.  Even with my walking cast, we covered a ton of ground.  Bath at sunset is so charming!  It had been a blue sky, sunny day, so the sunset was full of colors that reflected off the windows and water as we walked. 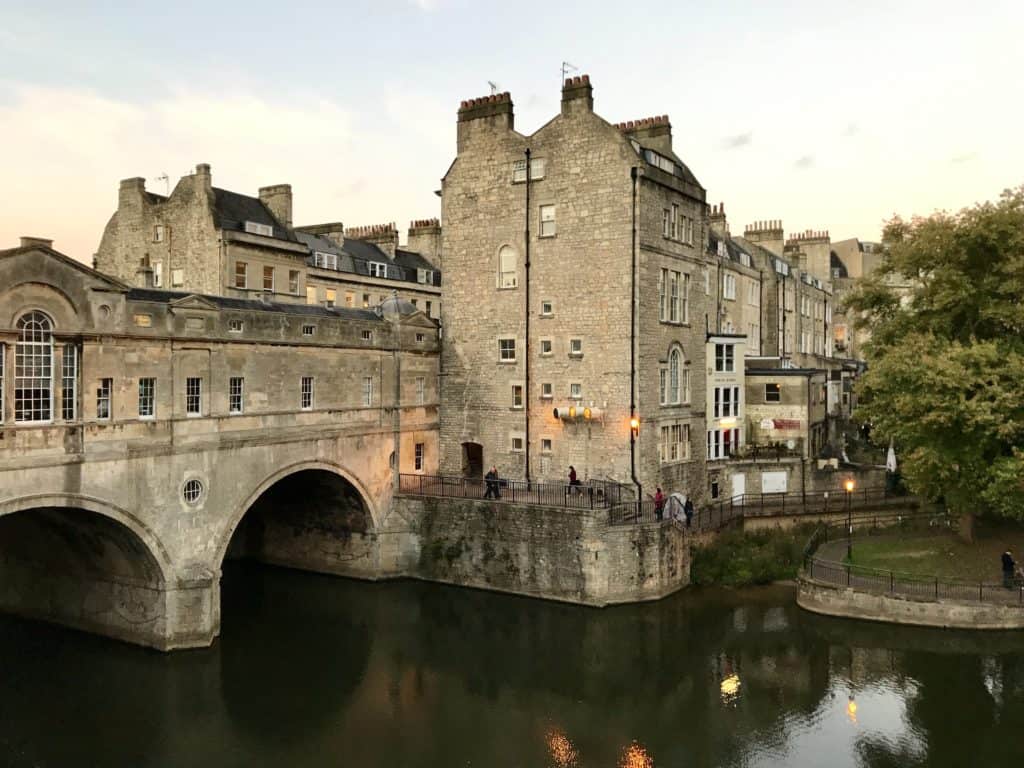 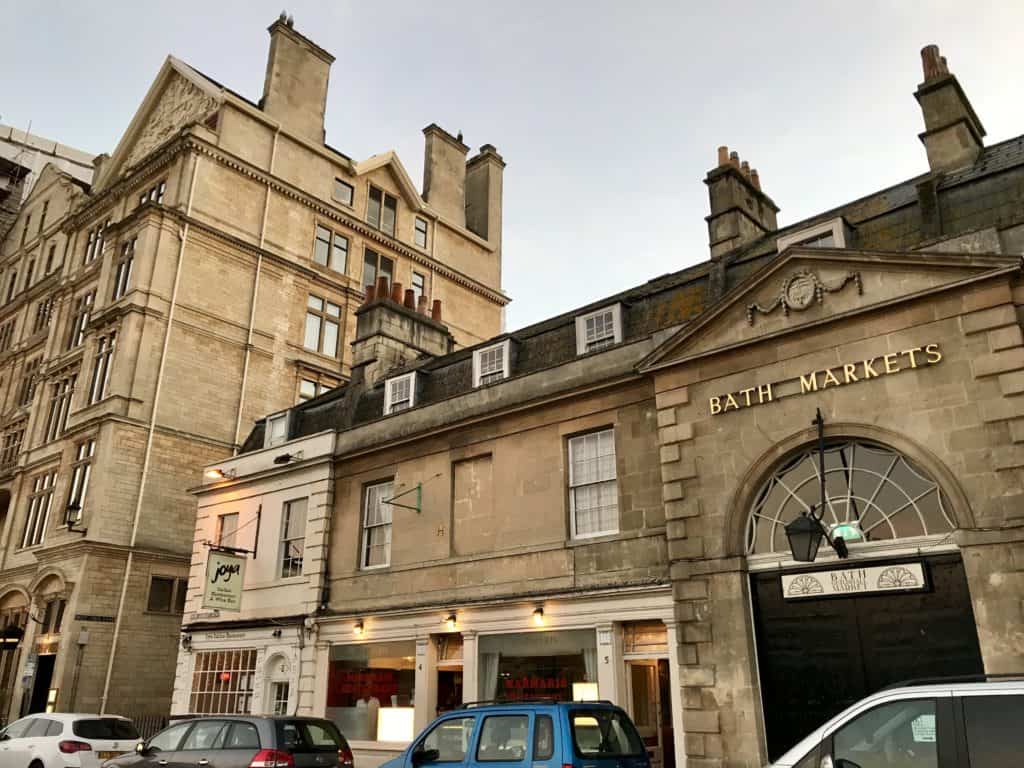 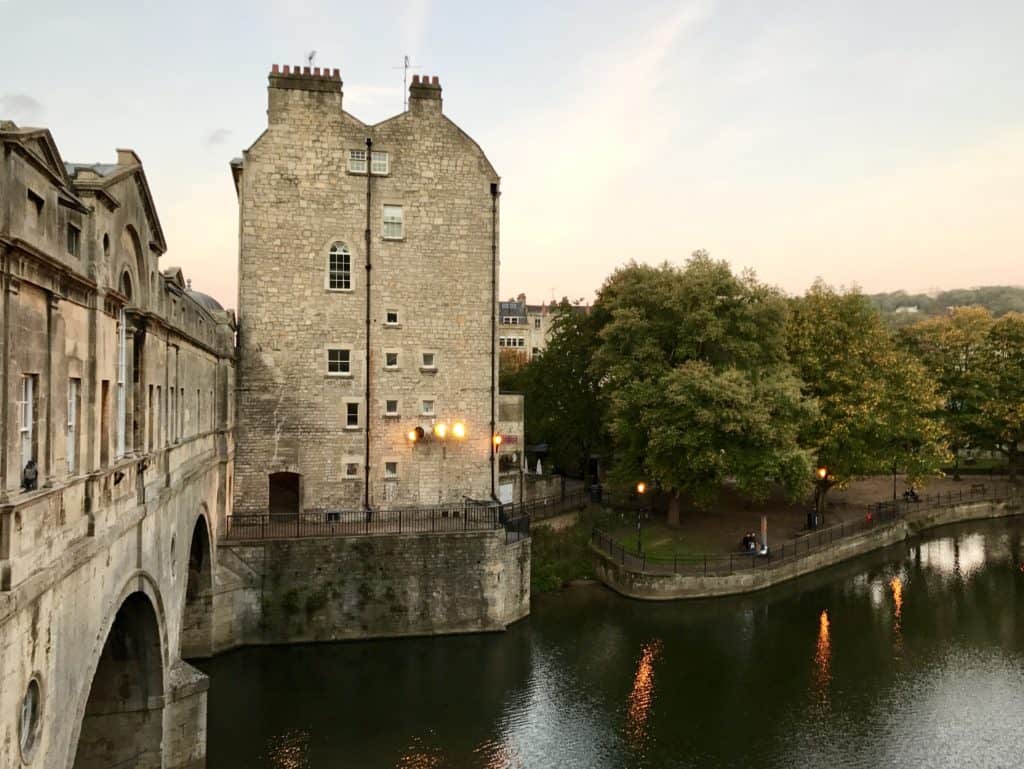 We walked over the Pultenay bridge, past the markets and along the water, and approached Bath Abbey from the side.  After soaking it in, we kept exploring as it got dark around us.  The main tourist area is super walkable, but a lot of it is just high-end modern shopping, which doesn’t hold a ton of appeal for me. 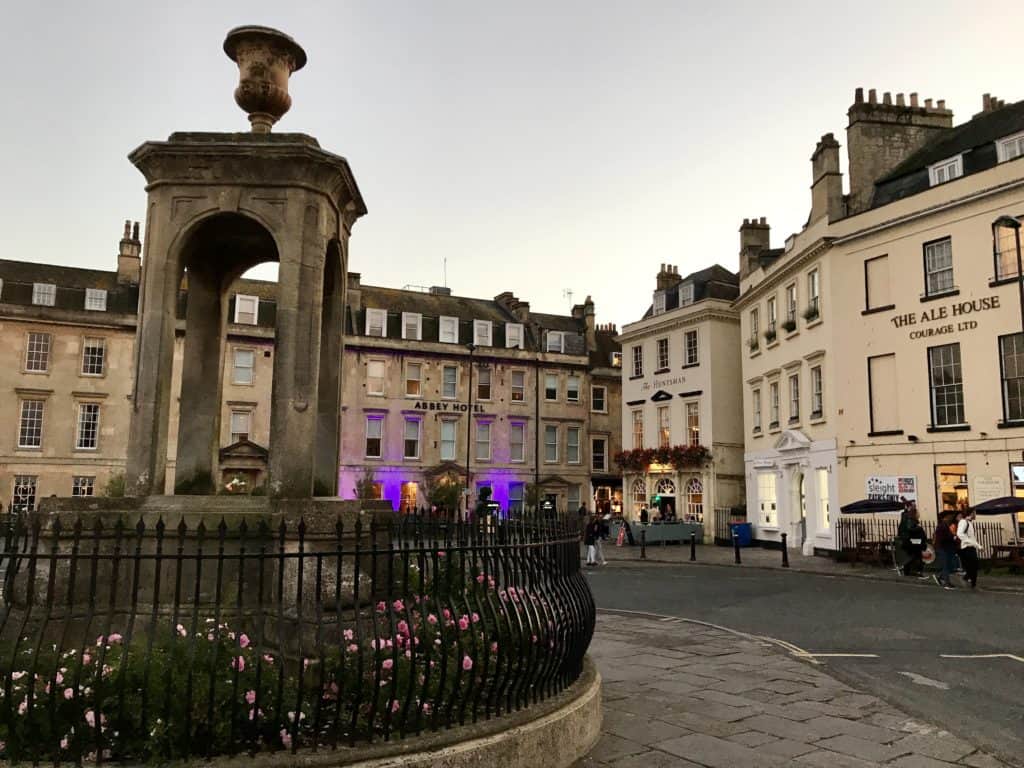 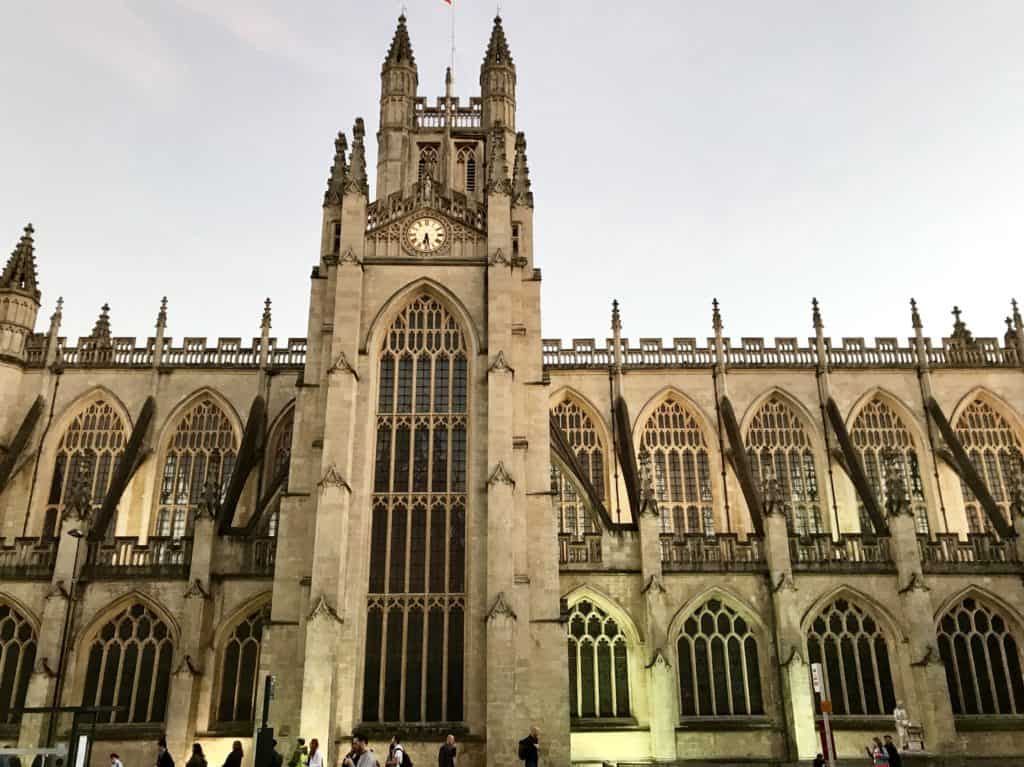 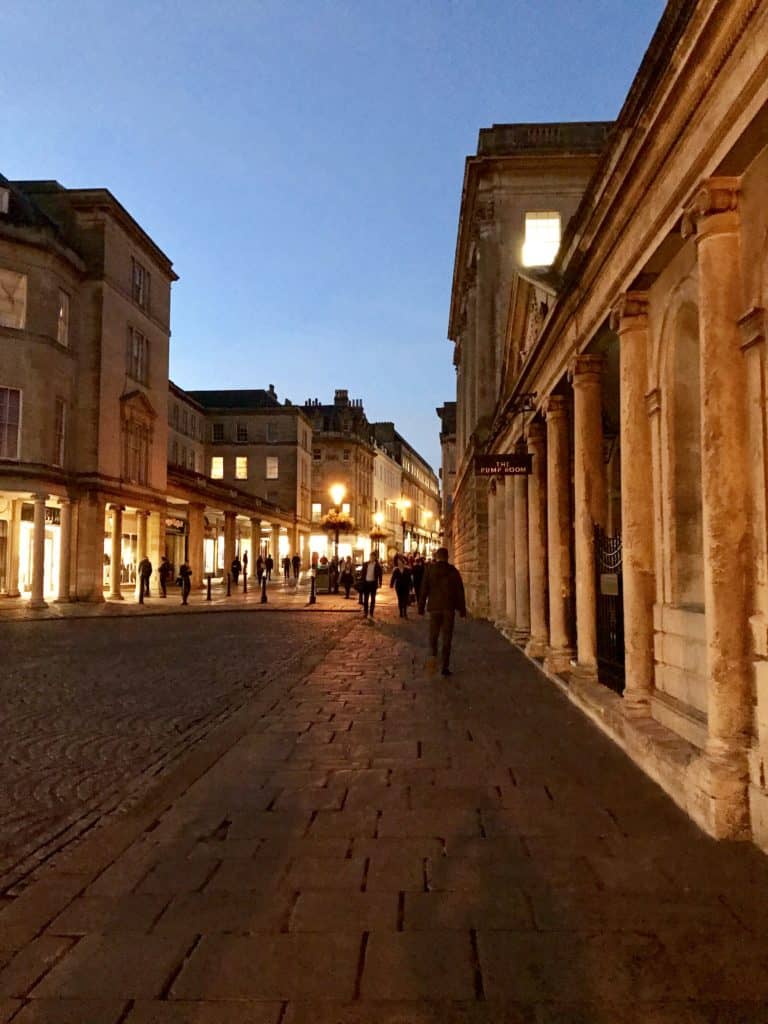 We’d made reservations at a little French place called Chez Dominique, recommended by our hotel, so we started to swing back that way.  We were running a little early, but had scoped out an amazing-looking craft beer store called Beercraft that we wanted to explore.  I enjoyed this DELISH local milk stout while we chatted with the guys who worked there about the area and local beer.  It was hands-down the best beer I had in England (why is it so hard to find stouts and porters?!). 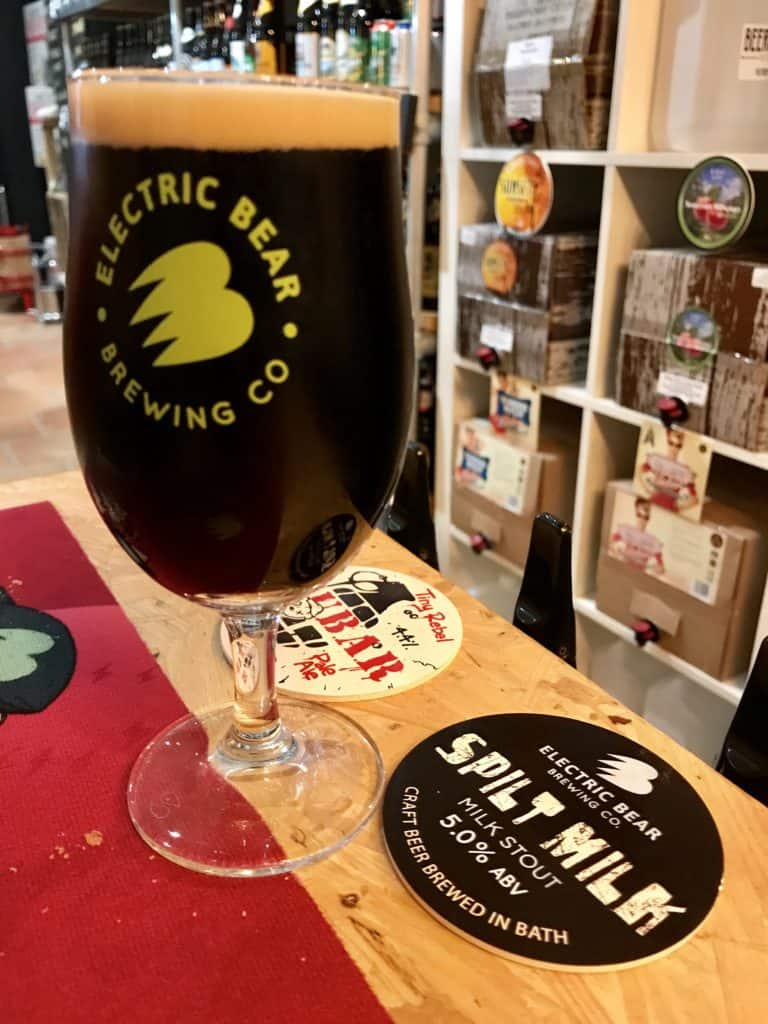 We walked across the street to have dinner at Chez Dominique.  I’m not the biggest French food fan, and this was more just nice vs. truly French.  I had leek and potato soup and a 28-day aged sirloin steak (topped with Bordelaise and bone marrow) with fries and wine.  Abigail and I enjoyed our meal and the service was great, but I wouldn’t go out of my way to eat here, personally.

After stuffing ourselves, we wanted to hit up some traditional local pubs to make the most of our time in Bath.  We’d asked around ahead of time and were told to check out The Boater, The Saracen’s Head, and The Pig & Fiddle.  We passed each of them and popped our head into the Saracen, but finally settled on The Pig & Fiddle.  There was a live band playing some (quite good!) rock, so it was pretty crowded and we had to yell at each other.

We were up & at ’em Friday morning to squeeze the most out of our last few hours in Bath.  It was pretty overcast, but I was able to snap a couple glimpses of blue sky!  Bath had so many pretty little details—the pics below give you just a little taste of what it’s like walking around there! 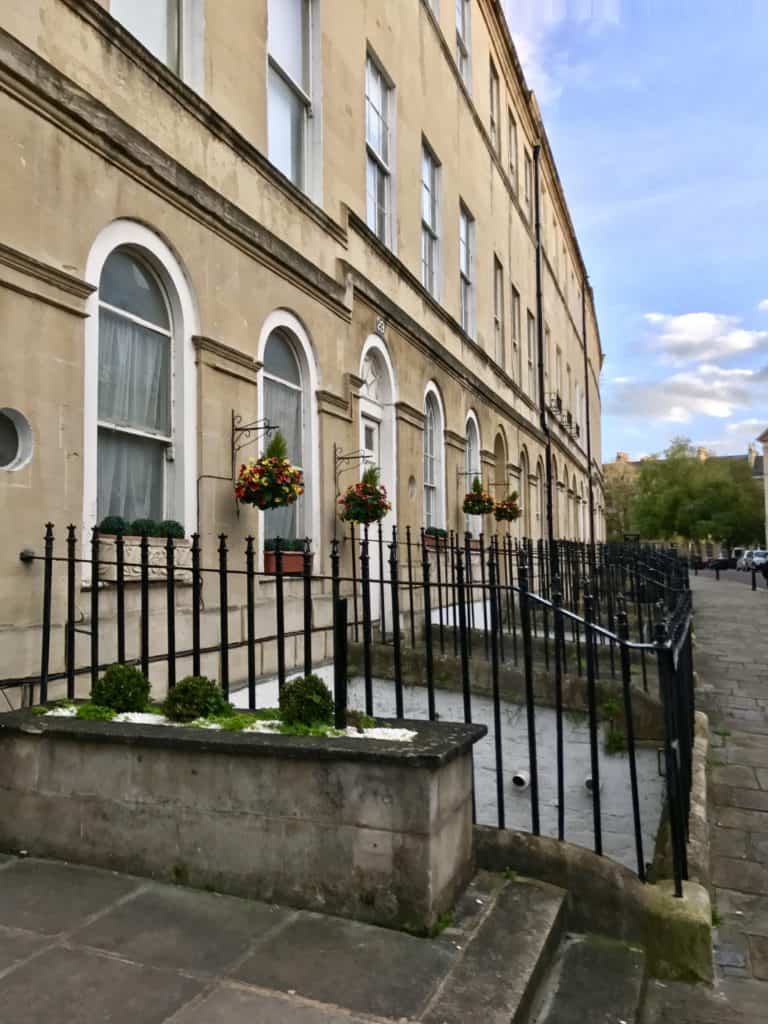 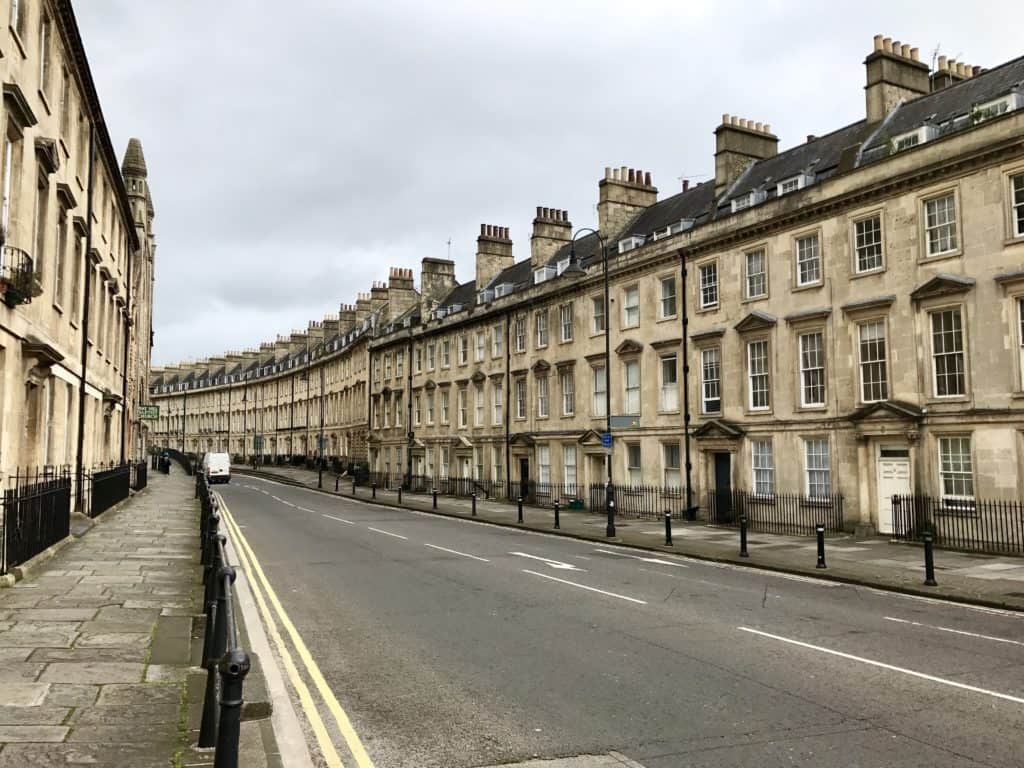 We retraced our steps from the night before because wanted to see everything in daylight, but were moving pretty fast because we had a destination and timetable in mind this time (besides more coffee…).  Our goal was to get to the Roman Baths right after they opened, to beat the crowds. 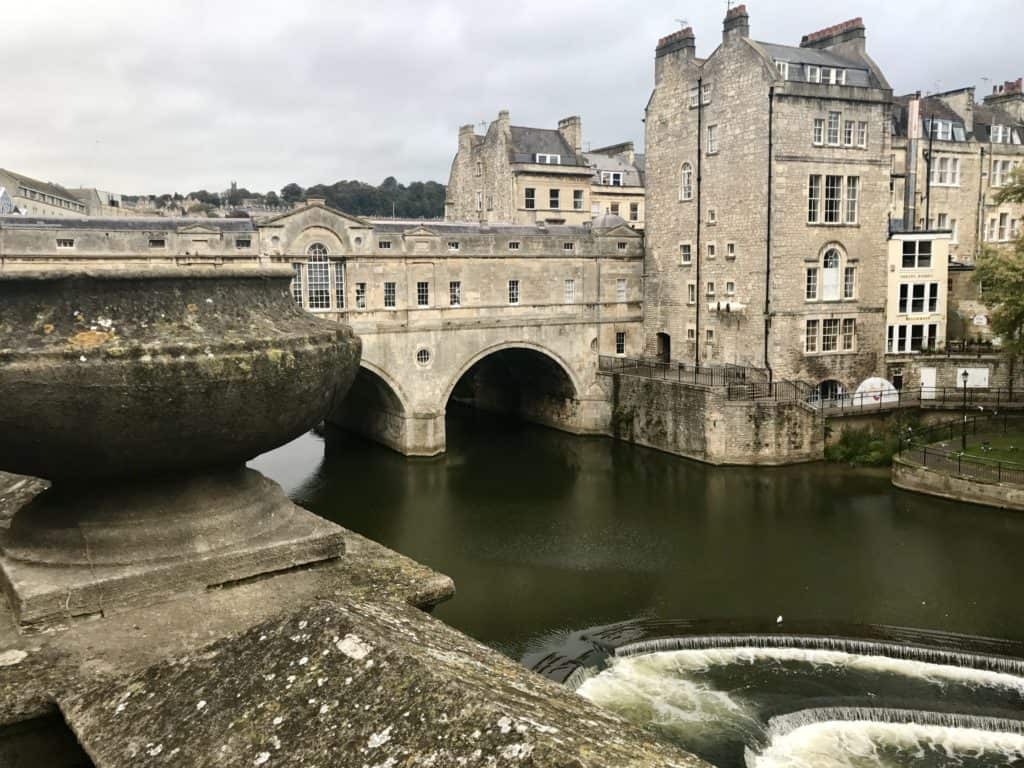 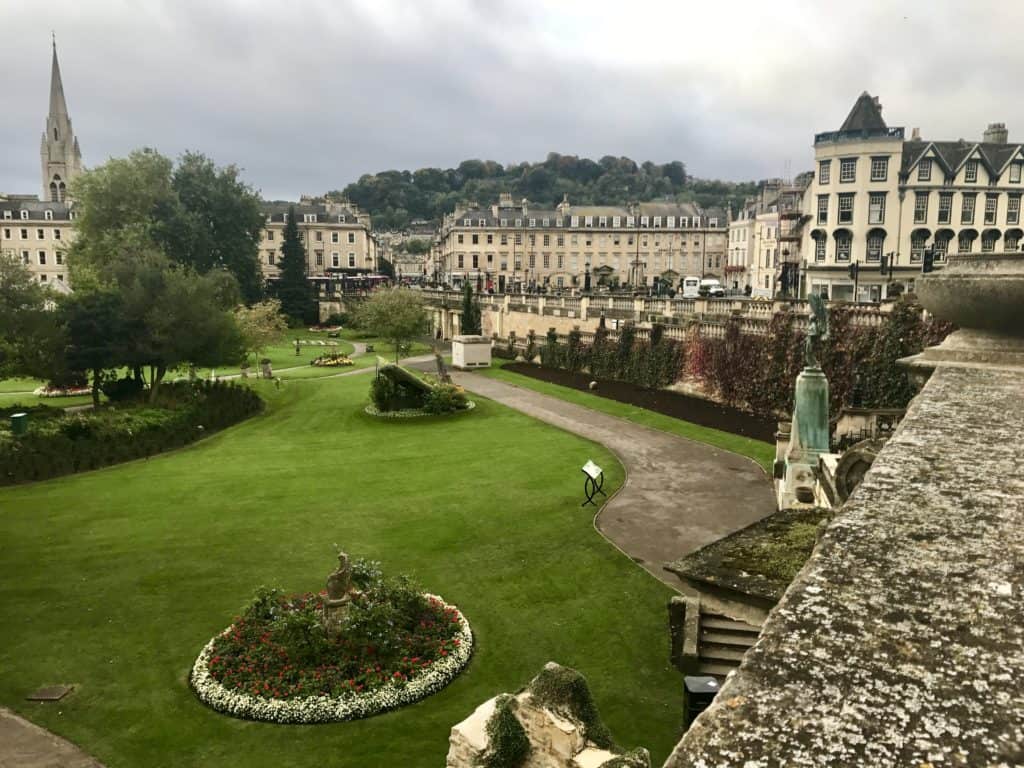 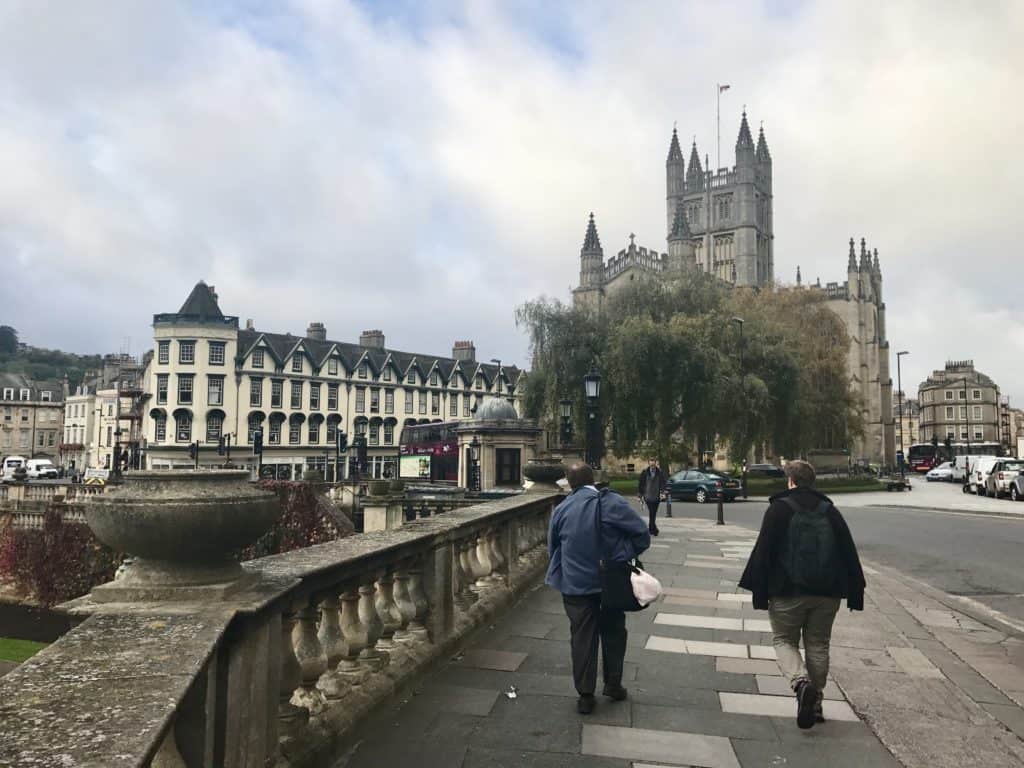 I’d totally missed some of these cool details on the abbey the night before.  Bath Abbey dates back to 1499, and sits on the remains of an even older Norman cathedral (originally dates back to the 7th century).

(On an odd and fascinating historical note, I went down an internet rabbit hole on the abbey and found this article about structural issues due to burying thousands of bodies…YOU’RE WELCOME) 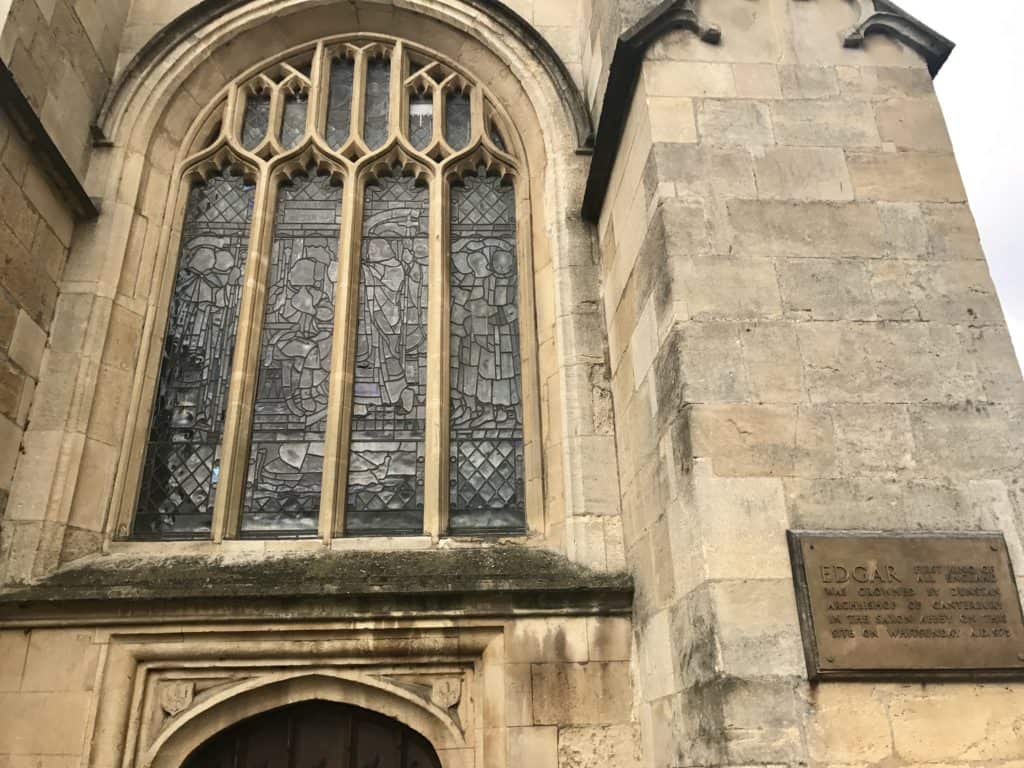 Everyone tells you have to go to the Circus and the Royal Crescent, two well-preserved streets of historic houses.  So, we dutifully hiked up to the Circus, considered the preeminent example of Georgian architecture and dating to the late 1700s.  It’s…fine.  I think we didn’t have any idea what we were going to see, so in our minds it was maybe more fun and colorful, more along the lines of a Notting Hill, so when we walked into the circle of houses we were like—okay, cool?

(Ha, I went back and read my journal and at the time I described it as “an underwhelming ring of beige houses”…) 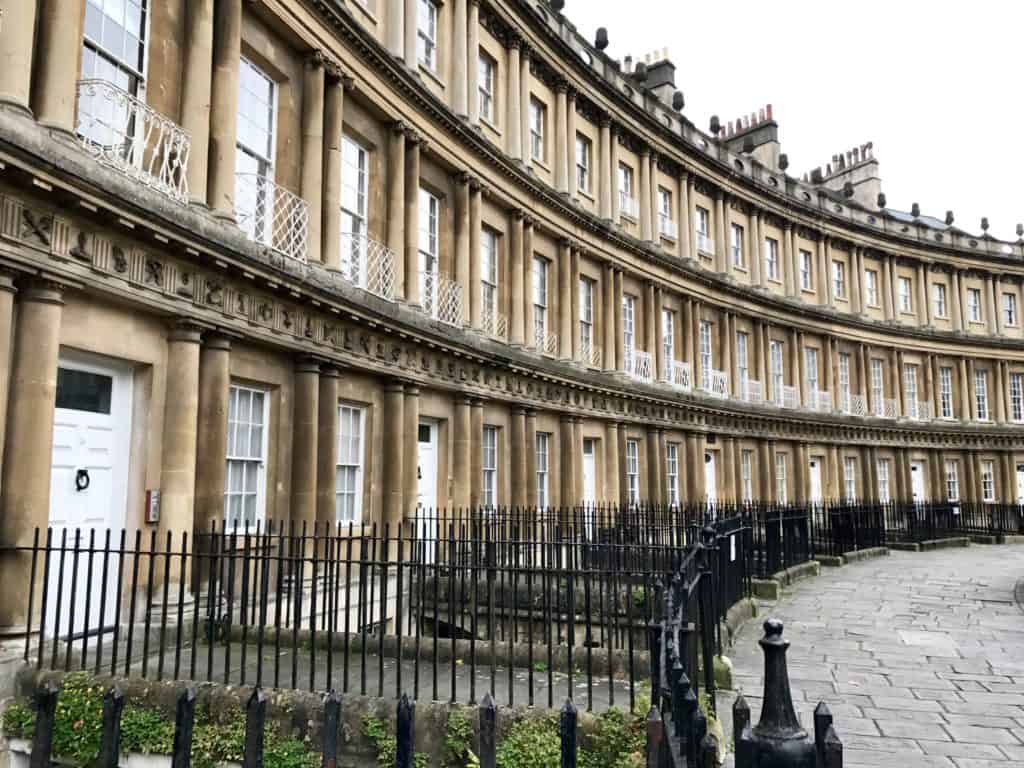 Fun Wikipedia fact:  the original architect was convinced that Bath had been a center of Druidic activity in old time-y times, so he designed the Circus to mimic the diameter of Stonehenge. 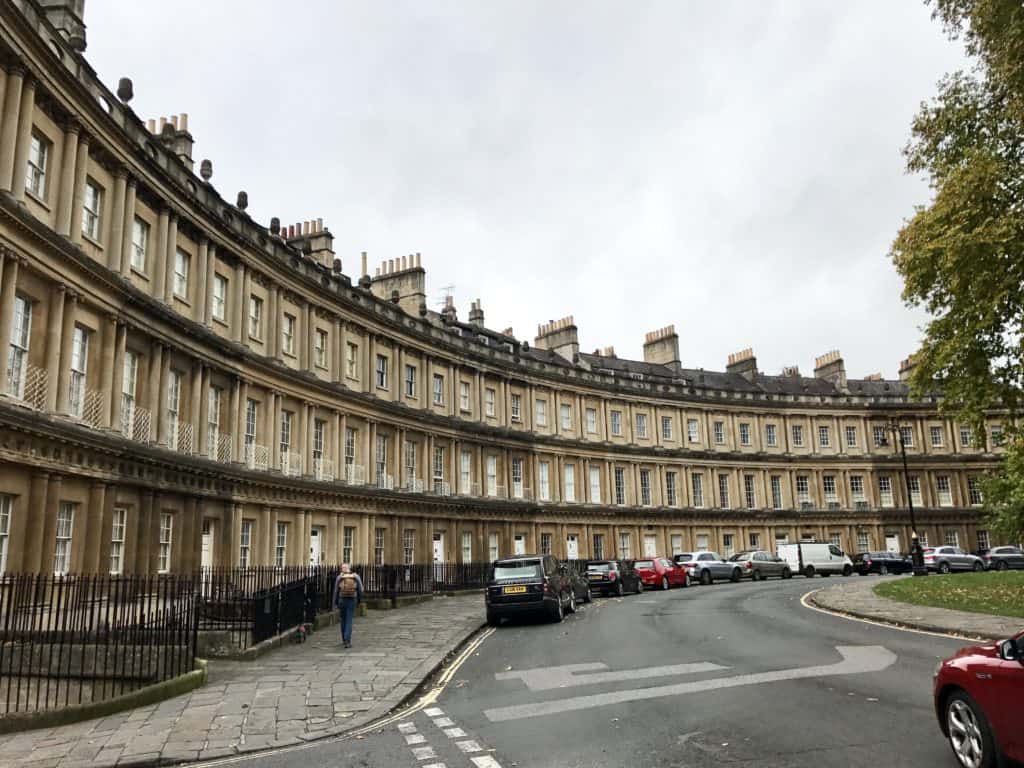 And at last, the famous Roman Baths!  These are maybe the most iconic view of Bath, and rightfully so.  I was prepared to be a bit disappointed and not have it look as cool in person as it did in Pinterest photos I’d seen, but it really was SO COOL.

As I mentioned earlier, we wanted to get there pretty much as soon as they opened to be able to get photos without lots of people (plus we really needed to get on the road toward London).  We got there right after 9:00am and were the only ones there for about 20 minutes.  I guarantee that is not the case during peak tourist season (we went in October), but always a good tip for beating crowds.  They open at either 9:00 or 9:30 depending on time of year, you can check times at the official Baths website. 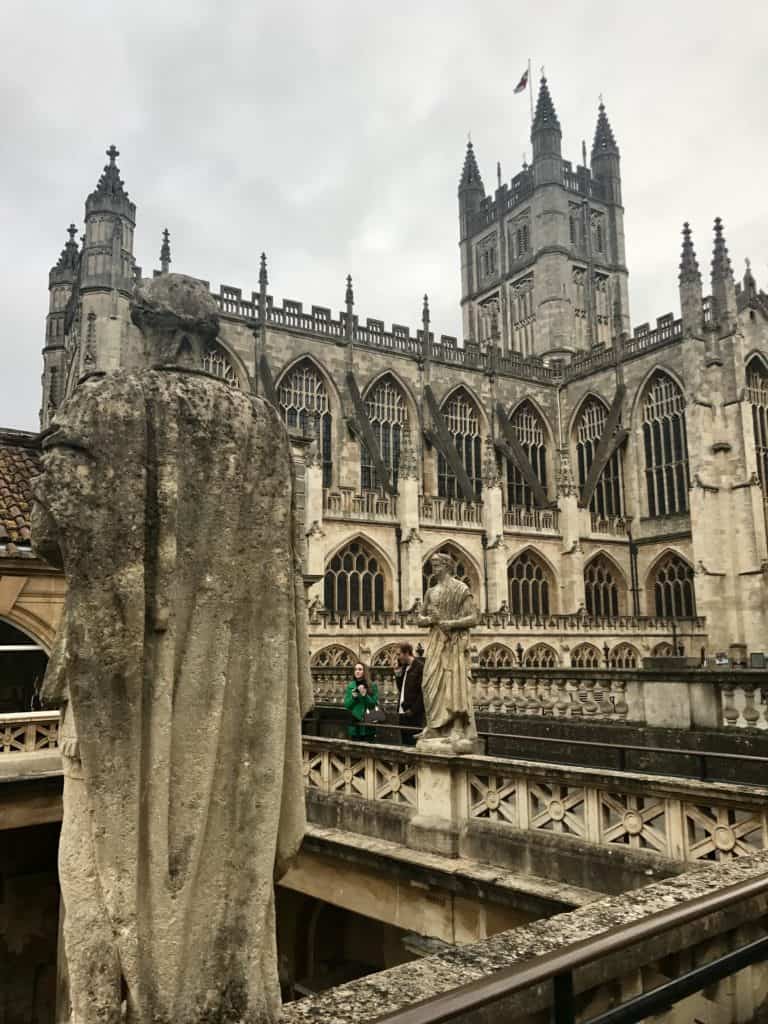 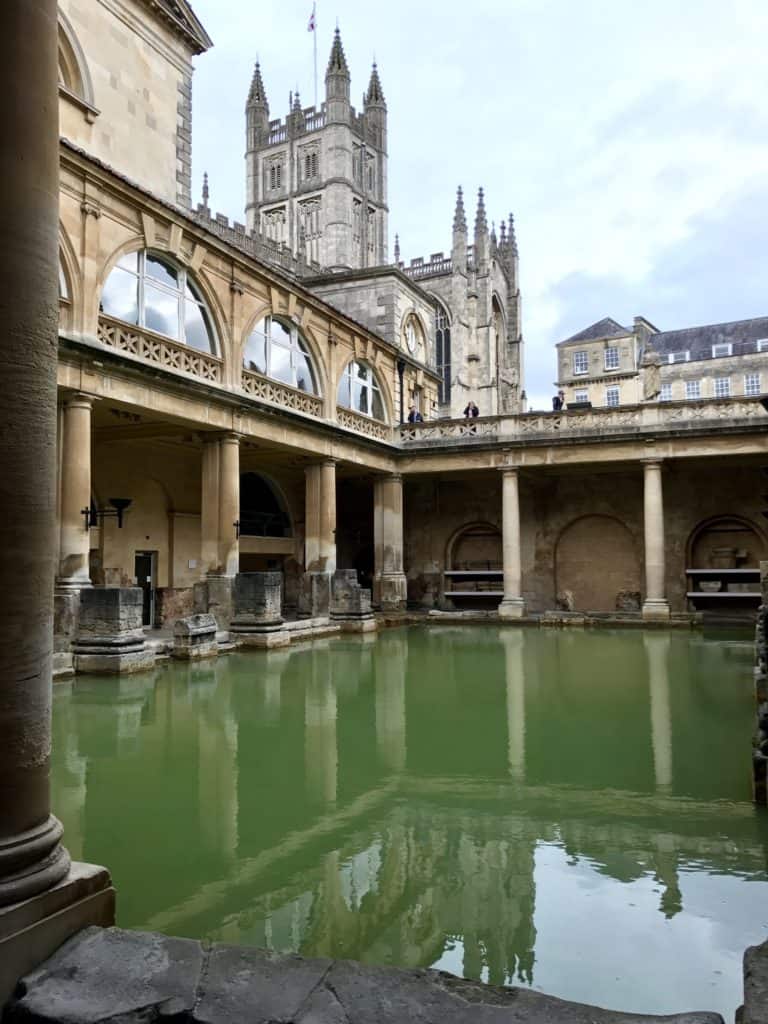 Tickets for an adult will be £16.50-17.50 depending on time of year (there are some saver options as well, you can see all ticket prices here), and comes with an audioguide.  Trust me, you want the audioguide!  It is chock full of info that you’d never get just walking through and reading the placards they have out there.  We were in a hurry so sped through there, but still learned so much more from skimming through the audioguide. 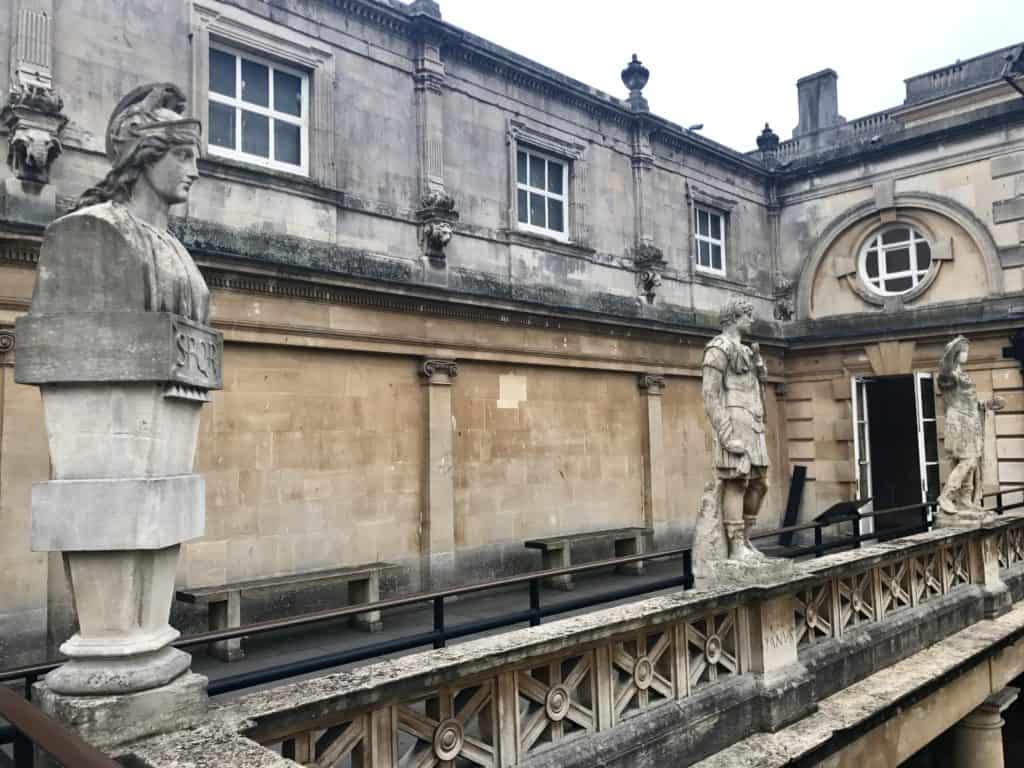 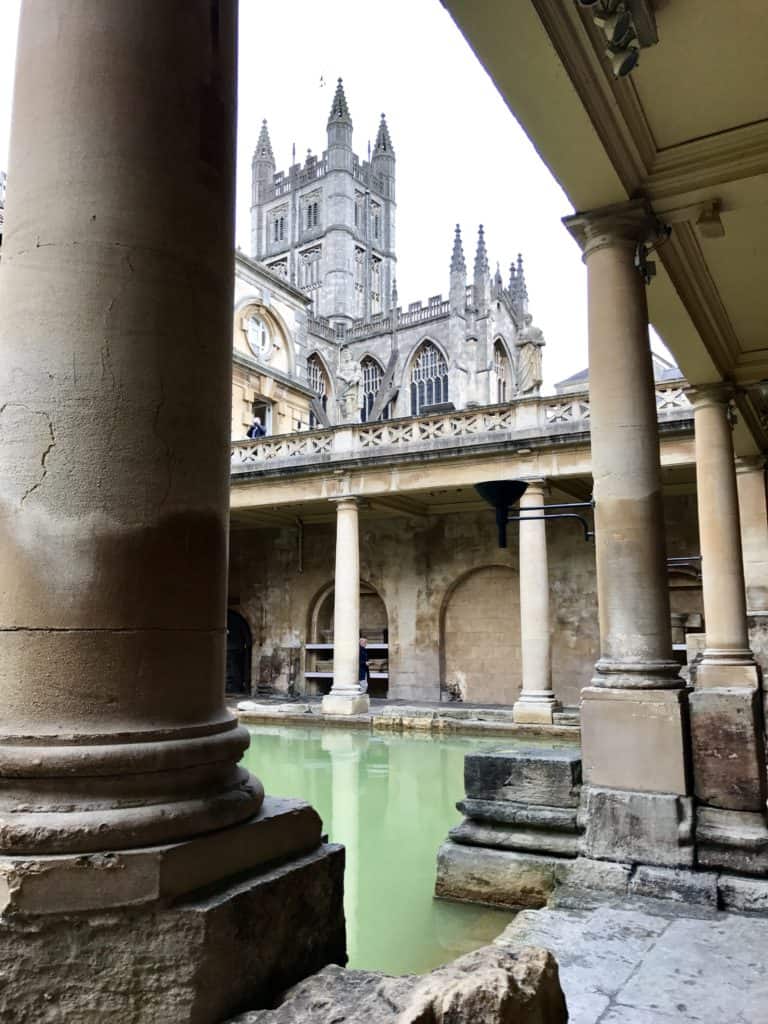 After seeing the Circus and before swinging by the hotel to check out, we walked around Bartlett Quarter and stopped at a cafe called Lucca for a coffee and pastry (okay, fine, PASTRIES).  Everything looked so good it was hard to choose what to get, though the taste of them all was just fine but not amazing. 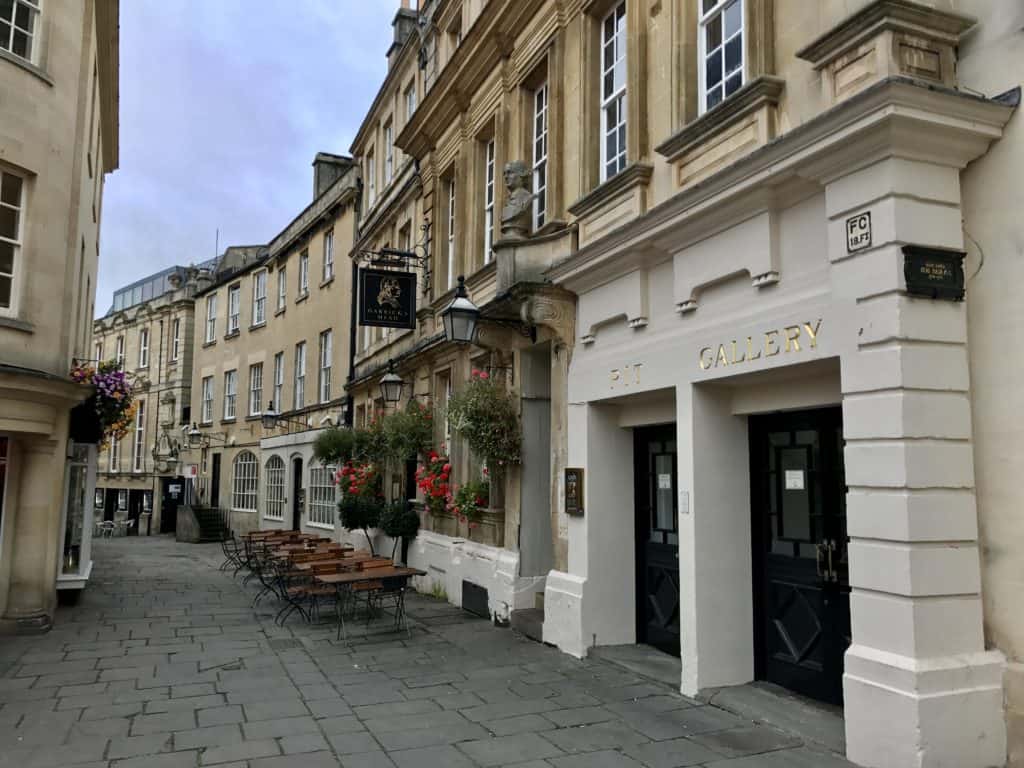 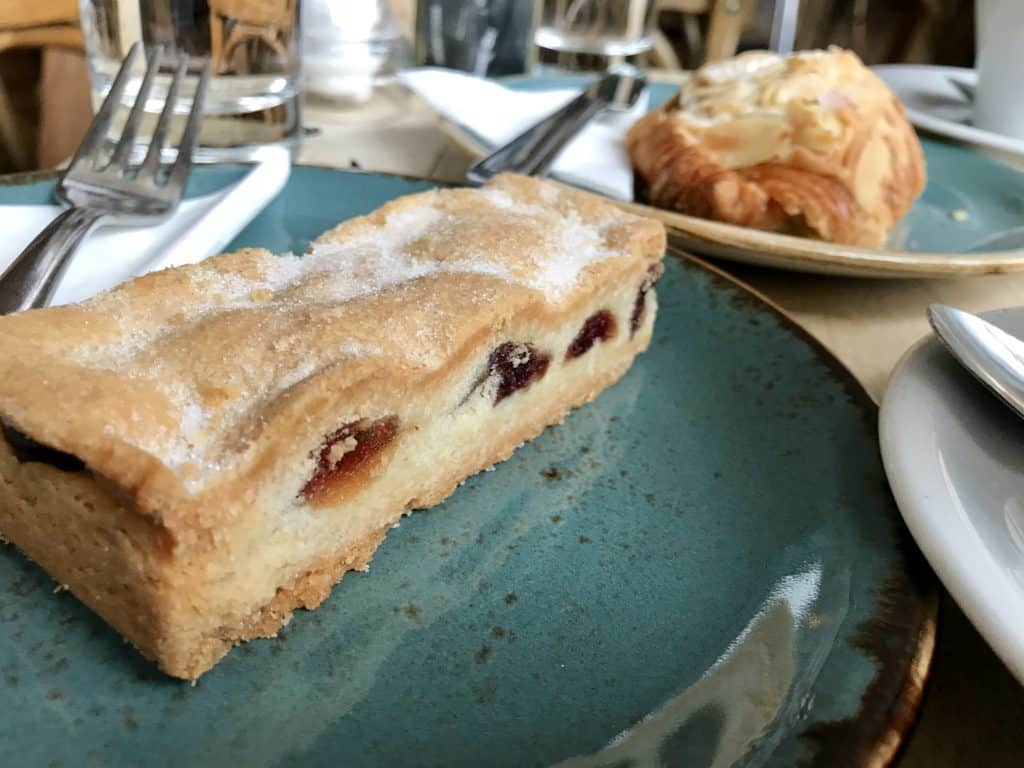 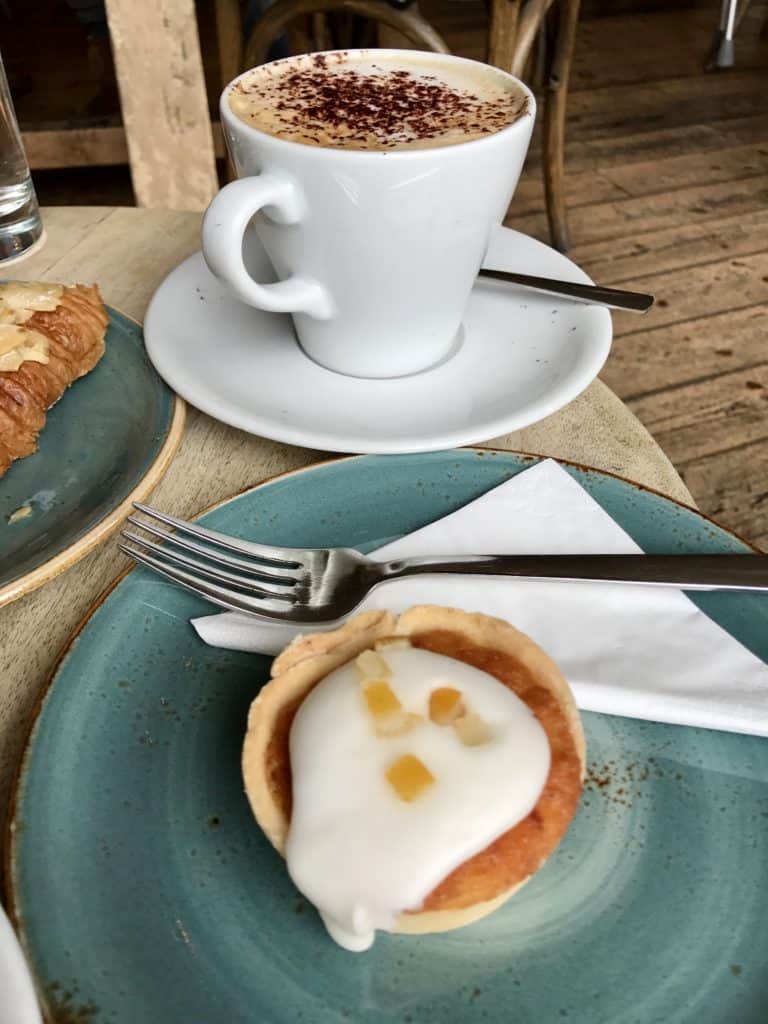 And so there you have it—what to do in Bath with a super short time!  Even though it was a brief stop, I’m so glad we got the chance to explore and sample some of Bath’s charm with our 16-ish hours.  Did we miss anything super critical that you think is a must on a short tour of Bath??  I’d love to hear from you in the comments!

Where to stay:  the super charming Henrietta House B&B 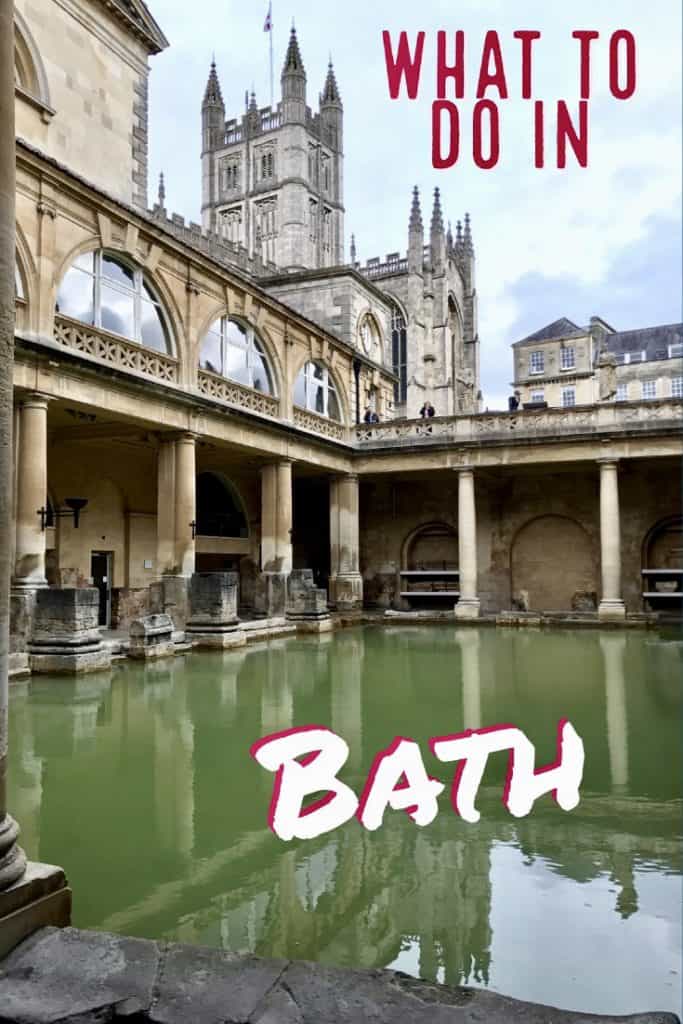 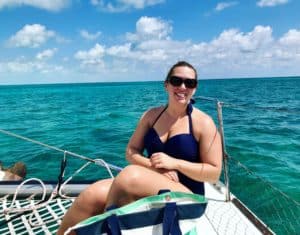 Everything You Need to Pack for a Chill Beach Vacay 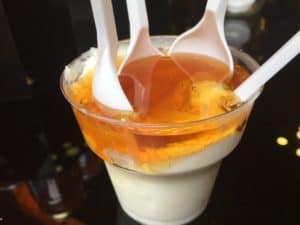 Guide to Turkish Cuisine: 20 Foods You Have to Try